Petra (rock in Greek) is a Nabataean (an Arabian people who from 312 BC had an independent kingdom here) city, carved out of pink sandstone.  It's a pretty amazing place.  After buying the entrance ticket, which costs $93 Canadian, we walked 1.2 km down the Siq to get to the main attraction- 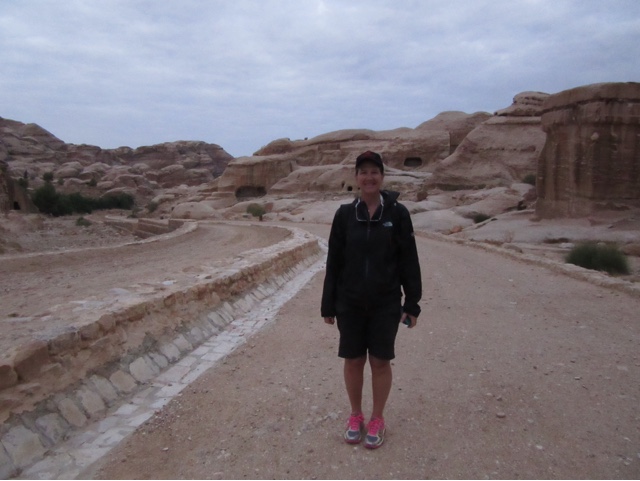 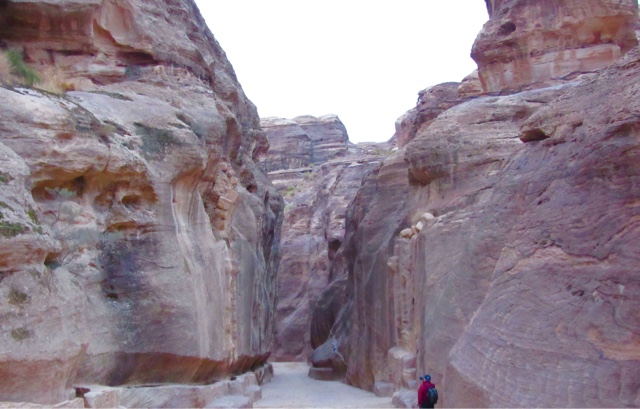 During the Nabataean period, potable and non potable water was available via small channels cut into the walls.  Non potable was not covered and potable was- 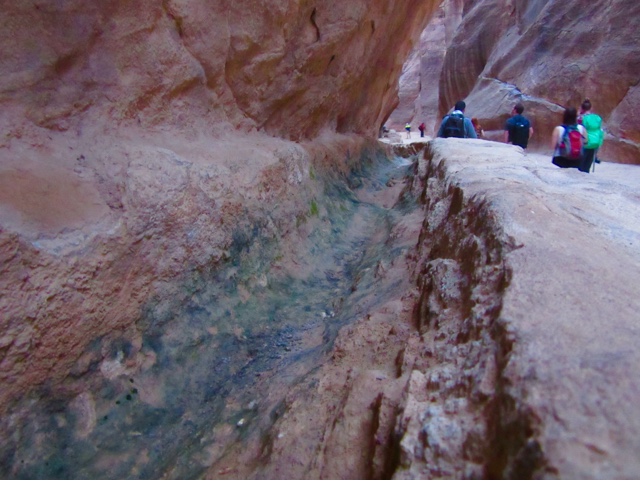 The Obelisk Tomb and Bab as Siq is a funerary symbol from the 1st century.  The 4 obelisk and 1 human figure probably represent the 5 people buried here- 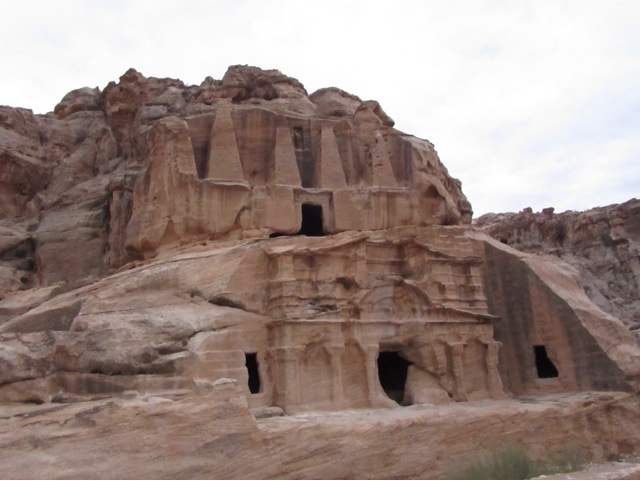 About 30,000 people lived here at one time.
Continuing along the Siq, there's a carving of a camel and a caravan man- 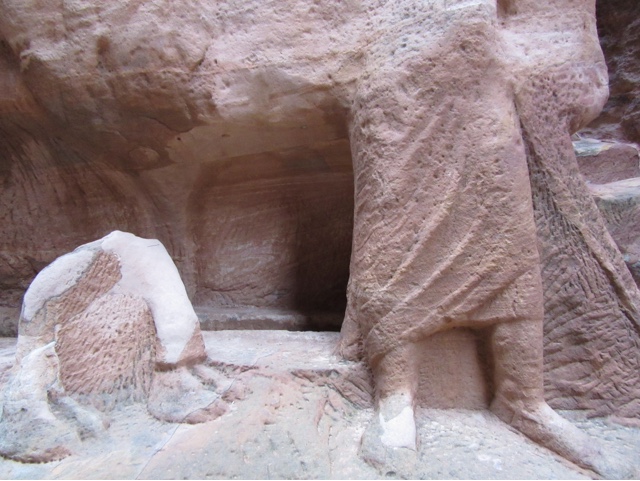 The Nabataean were smart, creating a writing system, building dams, water channels and cisterns as well as fabulous buildings such as the Treasury- 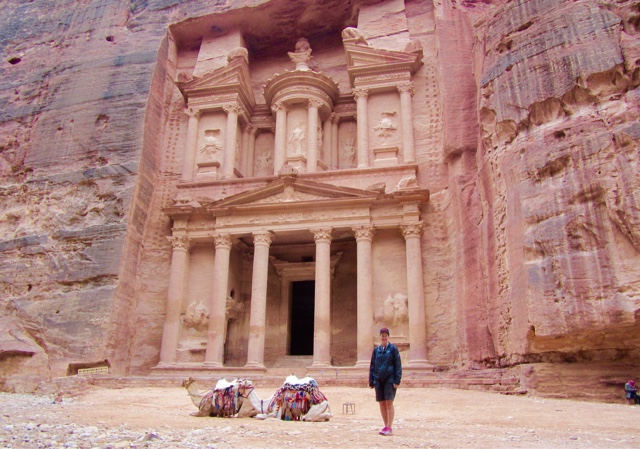 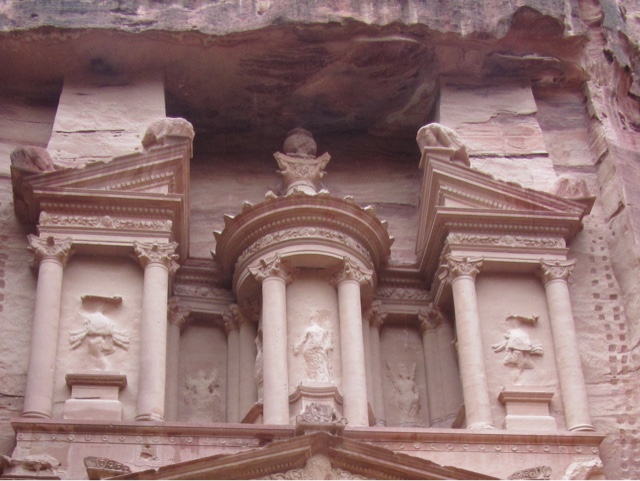 The Treasury is carved out of sandstone and was a tomb for the Nabataean King - Aretas III (100 BC - 200 AD).  We climbed up to see it from a different viewpoint- 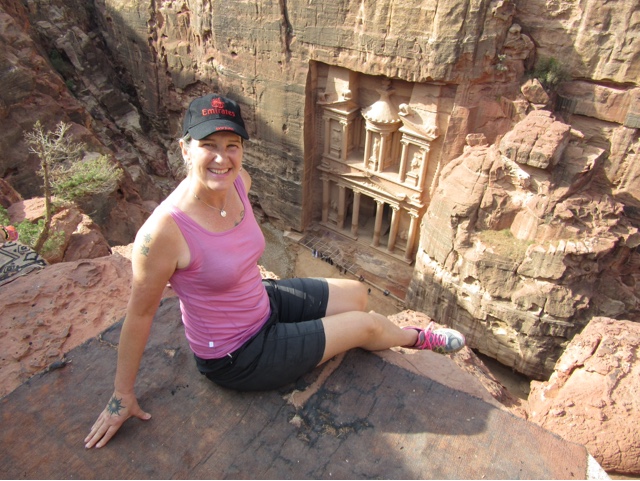 Back down, the Street of Facades has over 40 tombs- 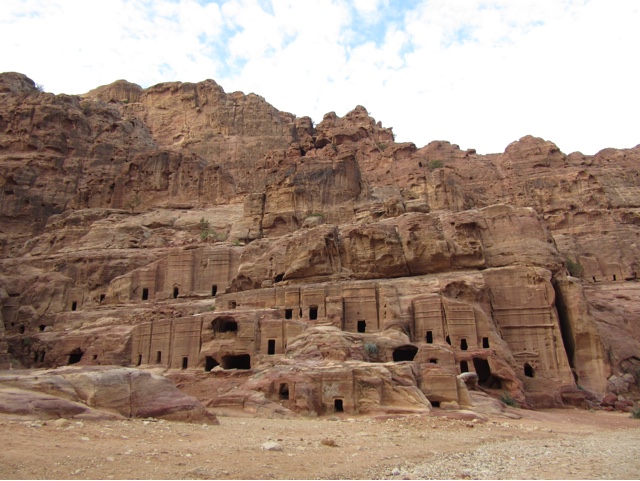 The colors in the rock are amazing- 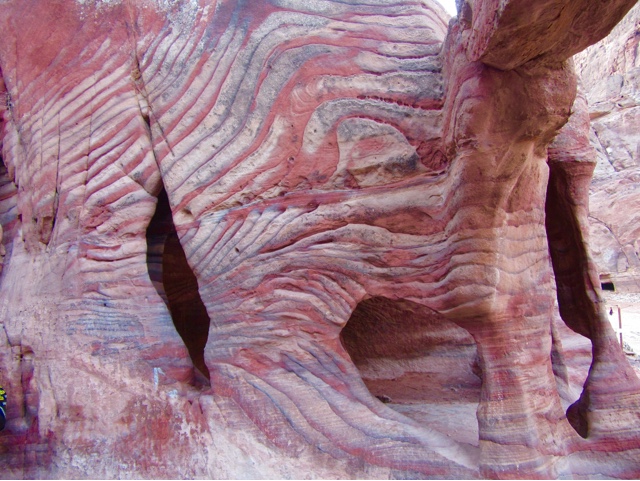 The theatre holds about 8500 and was carved by the Nabataenas, not the Romans in 106 AD- 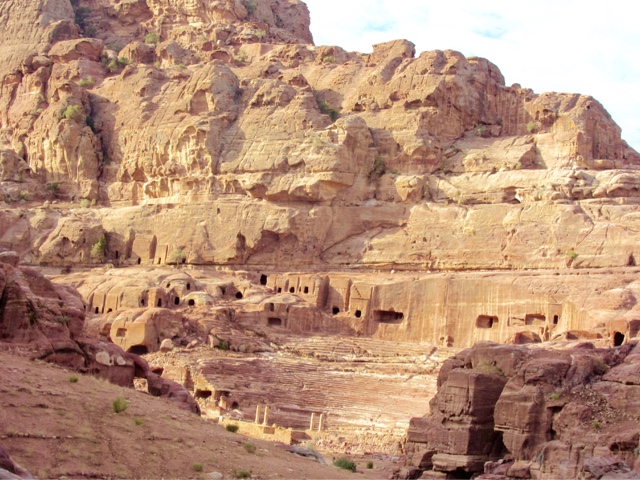 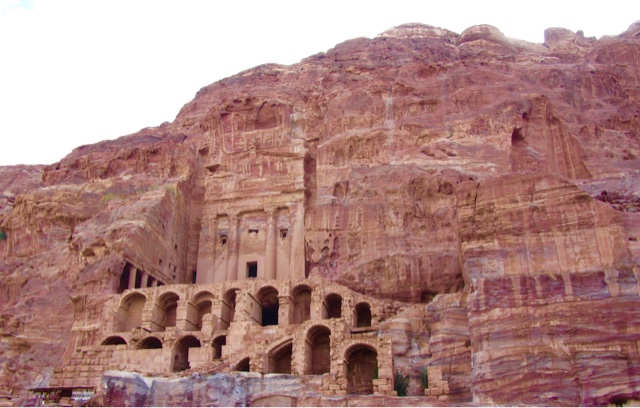 but there are many other tombs along the way-

With the shift in trade routes by 106 AD, the Romans took over and this is evident in the architecture here with a colonnade street- 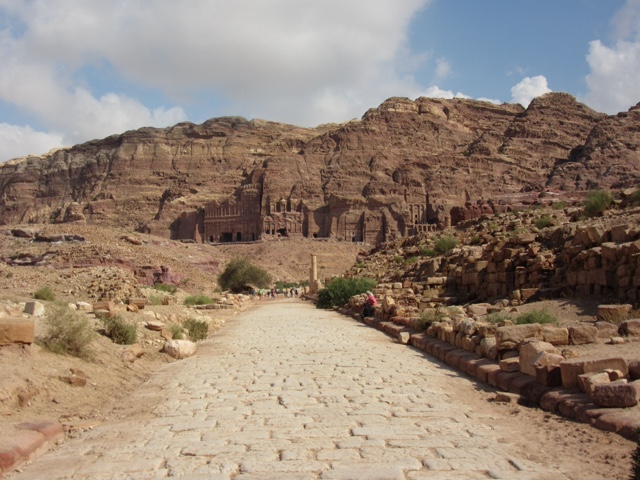 and columns at the Great Temple of Petra- 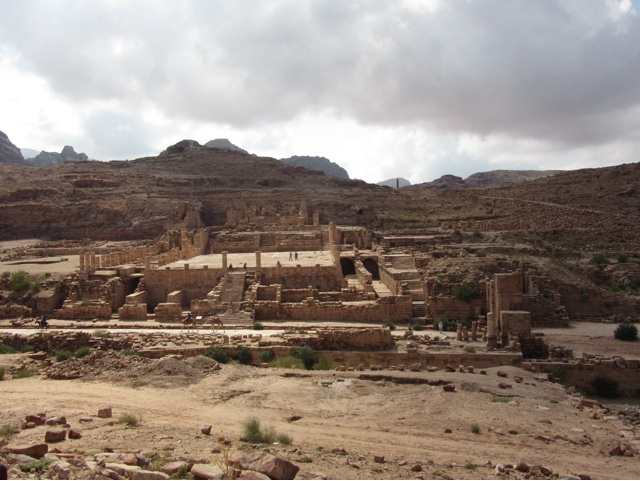 After earthquakes in 363 and 551 AD, the city was ruined and forgotten.  Only local Bedouin lived here- 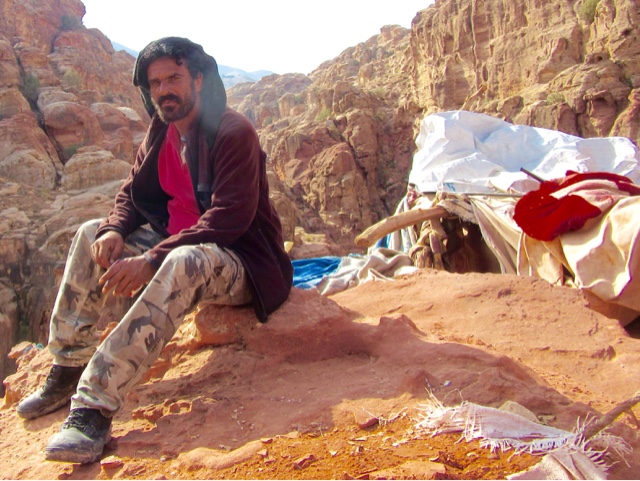 but 30 years ago, they were moved and given modern housing so they no longer have to live in caves.  Home is now in the village in the background- 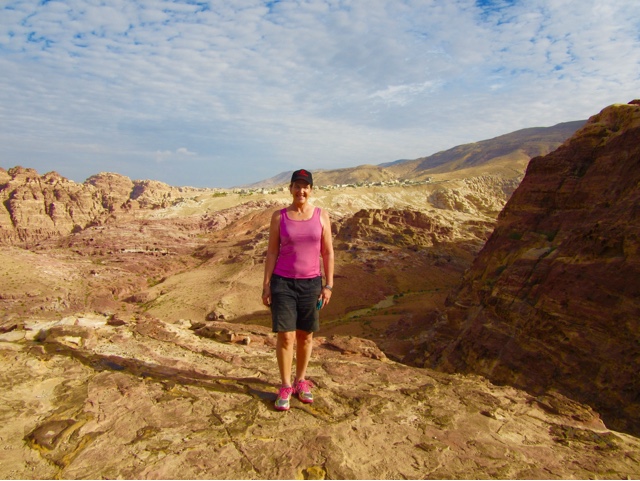 They are the donkey and camel owners, as well as the souvenir stand hawkers.  I had tea with these Bedouin women- 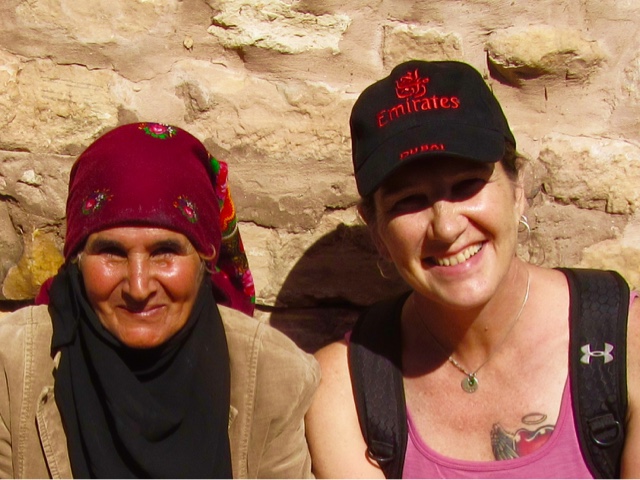 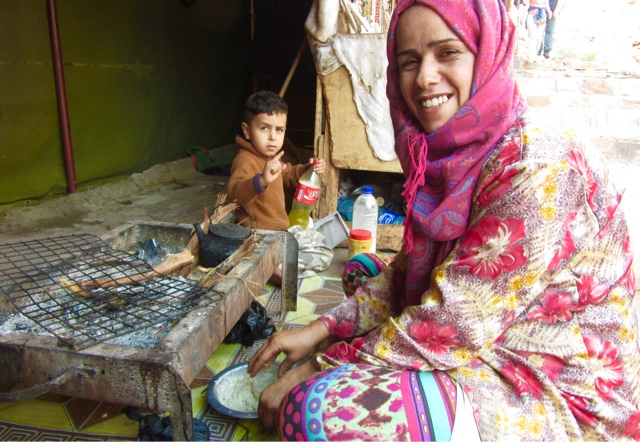 The Byzantine Church was expanded in 530 AD.  The mosaics are exceptional- 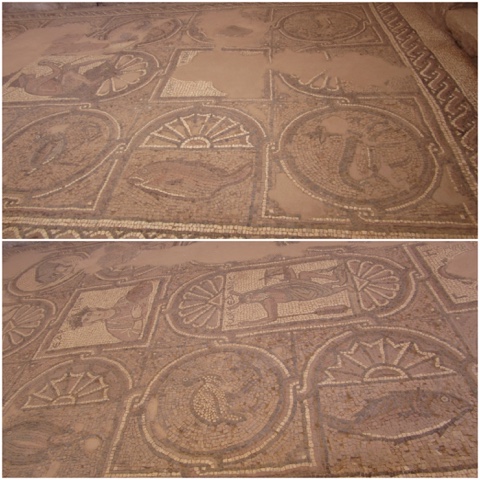 Donkeys and camels are available for hire and do they stink- 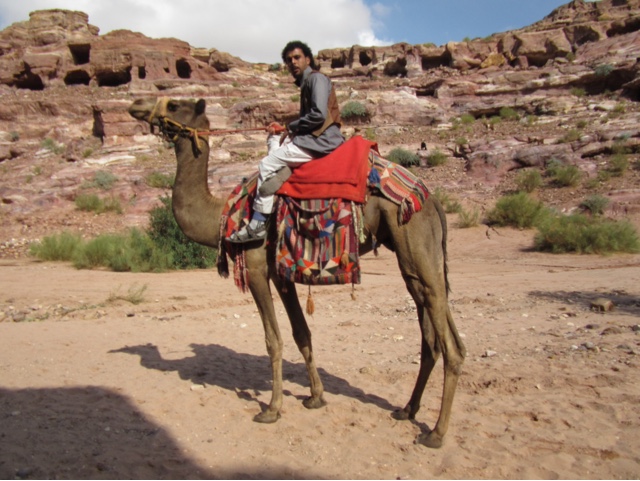 They are so weird, the way they slink along.  They don't really have hooves, more like slippers that flatten out when they put weight on their feet.  Also, when they are laying down, their knees bend underneath them.  It looks very uncomfortable- 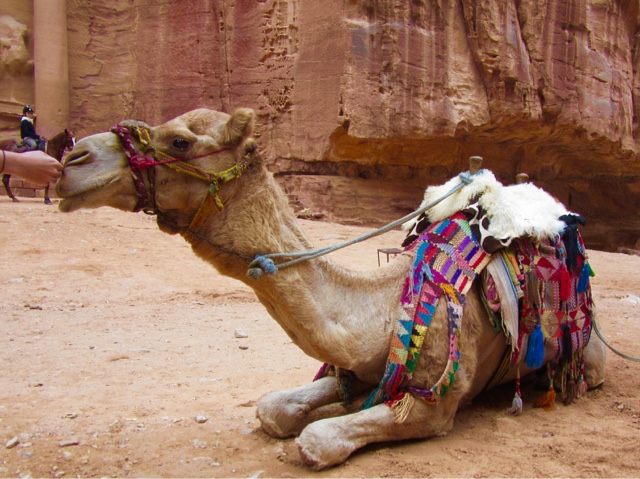 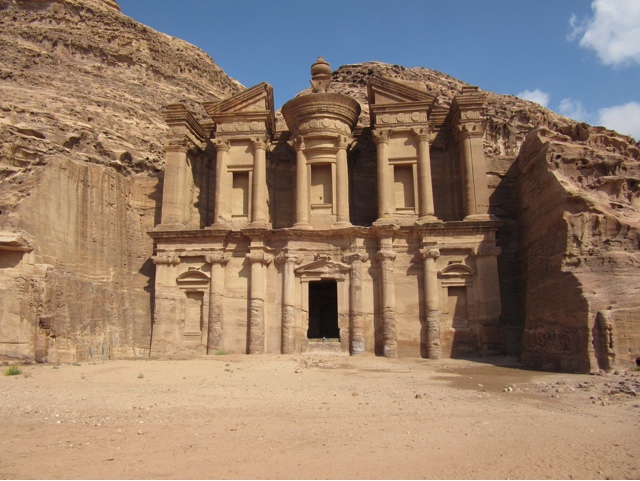 Walking down from the monastery the views are sensational- 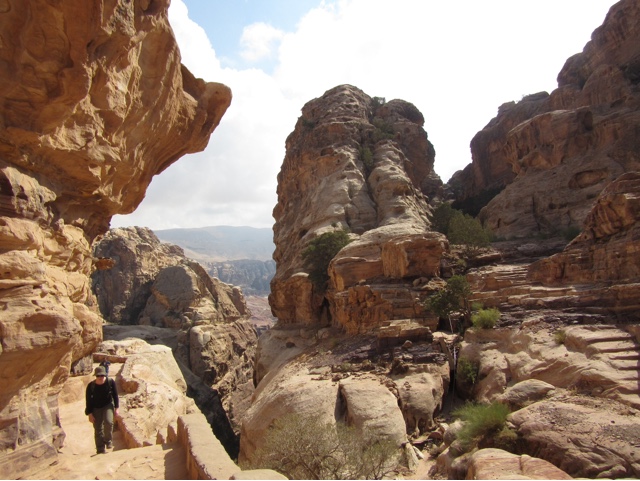 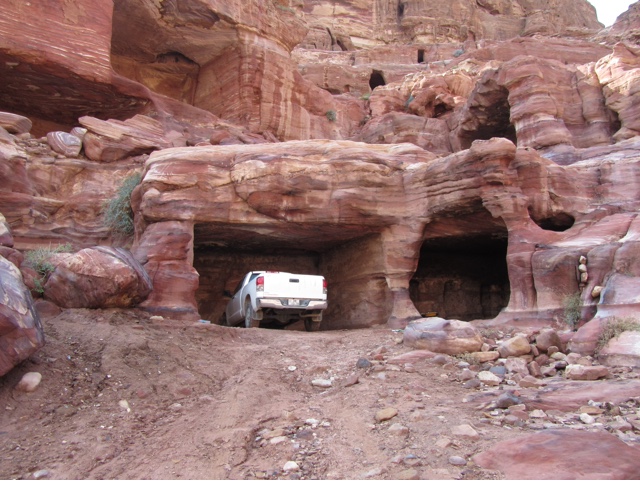 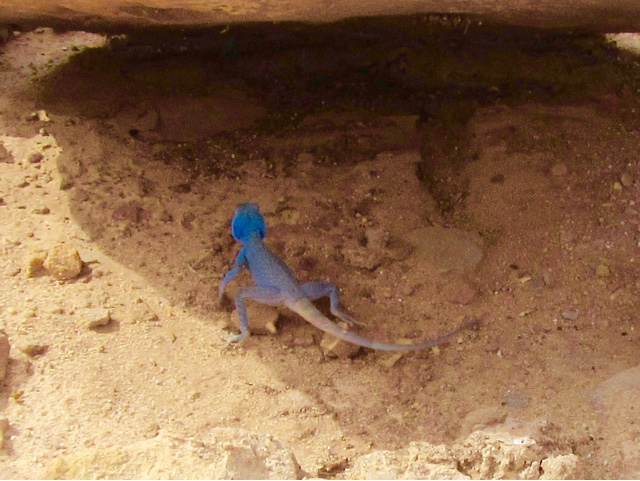 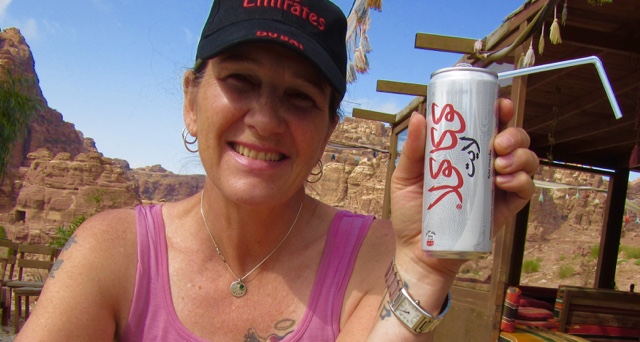 Marguerite von Geldermalsen, a Kiwi, came to Petra in 1978 and fell in love with a Bedouin (they look like Jack Sparrow).  She wrote Married to a Bedouin (now on my Kindle) and her son manages her booth- 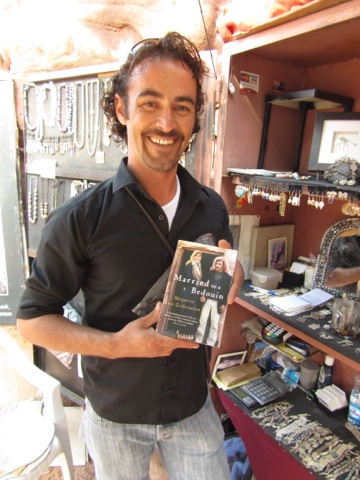 Today was a huge day.  We left the hotel at 6 am and I returned at 4 pm.  Zuhair, our guide, said we'd be walking 25 km and it felt like all of that!  In spite of the 3000 or so stairs, the worst part was the 3 km, all slightly uphill, through the Siq back to the entrance.
Supper was mensaf- lamb on rice and then a dish of liquidy yogurt is poured over everything.  I didn't really like it because I'm not too in to rice but it's a specialty of the area- 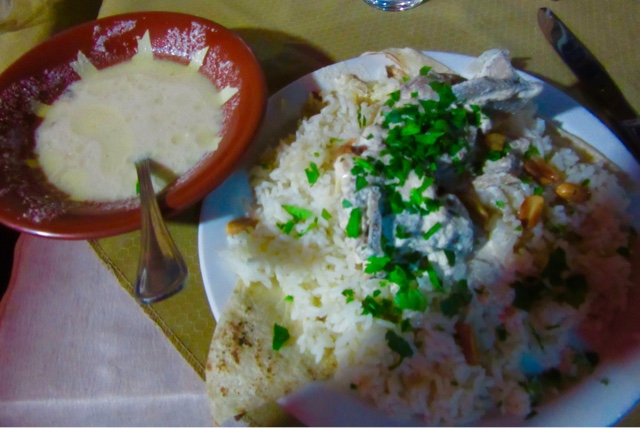 I'm looking forward to Wadi Rum, a jeep ride in the desert and sleeping in a Bedouin hut tomorrow!
at October 28, 2015