Today we went on a rhino walk in Matopos National Park and were very successful.
We saw the square lipped rhino, which in the Dutch translation is called 'wide' which in poor English translation has become white.  Weird. 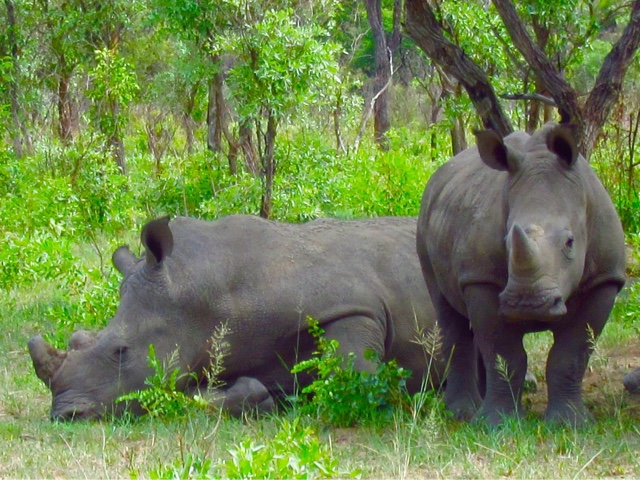 Their gestation period is 16 months and they hang out with their calf for 2 - 3 years.  This fellow was 2.5 years, far too old to still be sucking- 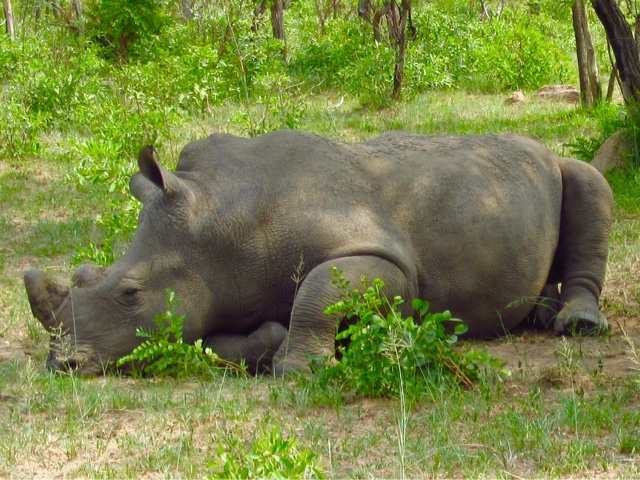 The horn grows out of the skin without a bone in the center.  To prevent poaching, it is removed once it is about 6 inches long.  It does grow back and one of the longest known horns was 1.6 meters.  There are 400 rhinos left in Zimbabwe.  Armed park rangers hang out with them 24/7 and poachers are shot on sight.  Asians want the ground down horn to use as an aphrodisiac.  When rhinos have sex, it goes on for 40-50 minutes and so Asians apparently believe if they ingest the horn, they too will have such virility.  Haven't they heard of Viagra?
The Nswatugi Cave has paintings dating back 30,000 years-

They were painted by San or Kwengo bushmen who still live in small, isolated villages and run when they see other humans- 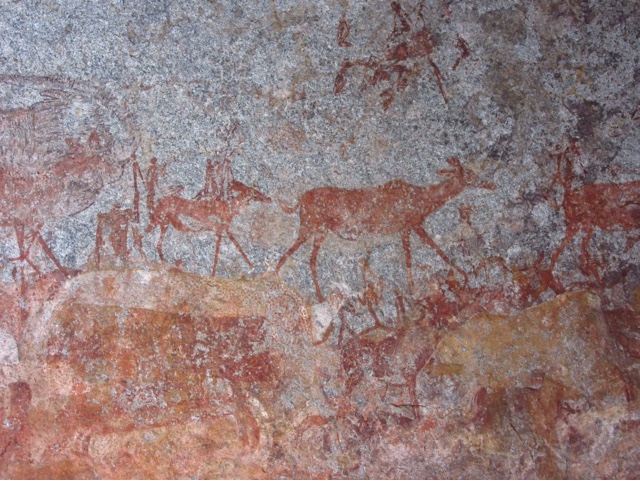 Granite is igneous rock and when it cools, it cracks and shrinks.  Wind, water and dust erosion have formed round rocks sitting on top of flat rocks- 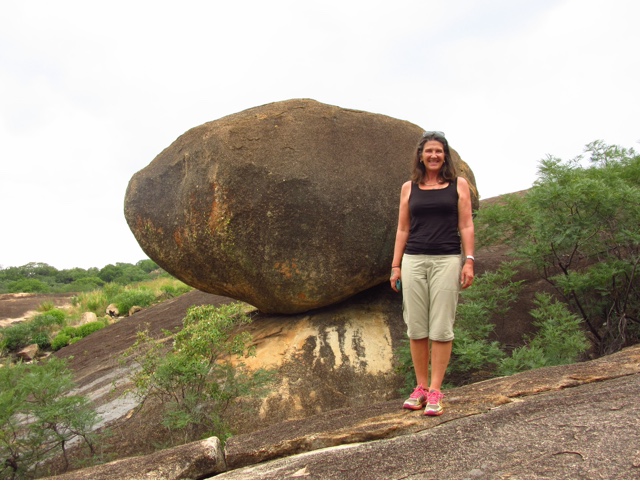 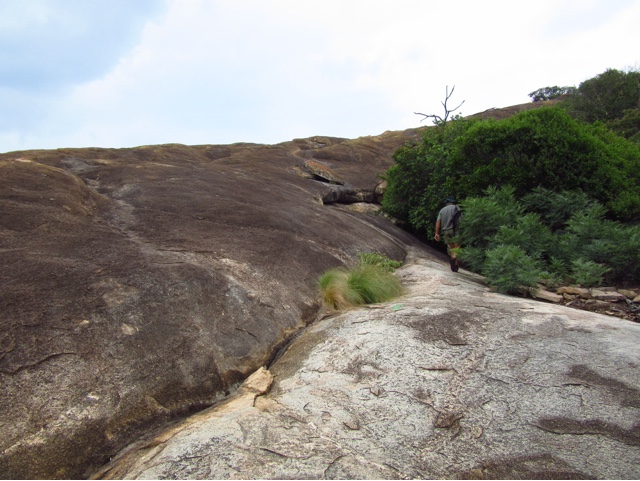 Our guide for the day was Norman II.  He knows a lot about Zimbabwe's history.  Independence happened in 1980.  At that time, one Rhodesian dollar was worth 2 US dollars.  250,000 whites and 10 million blacks lived here.  The minority whites ran the country and it was normal for one farm to employ 1000 blacks.  Of course, they were married and had at least 2 children, so one white farmer looked after 4000 blacks by providing education, health care and basic living.  Farms prospered and Rhodesia was a rich country.  Robert Mugabe is 93 and is the quack running the country since 1980.  In 2002-2003, farmers favoured the opposition party so Mugabe's response was to take their land and redistribute it to black government officials who didn't have a clue how to farm.  Not only did the white farmer lose everything, but the black workers/families also lost their jobs and livelihoods.  Today there are only 30,000 whites here.  Before independence, there were over 4000 farms.  Today there are fewer than 300 and a farmer was just kicked off his land yesterday.  There is 92% unemployment and believe it or not, the Chinese have moved in.  They are here building roads-paid in diamonds and the rumour is that their criminals are here working on farms.  The food produced on the farms is sent back to China. Cotton is also sold to China for 2 cents/kilo.  China makes cheap clothes and sells them here.  The only bad thing is that typical Chinese, the clothes don't last.  America also sends over second hand clothing and that has destroyed the local clothing industry leading to more unemployment.  The white/black situation has always been much different than in South Africa.  Blacks were treated well with comparable education and good health care.  Since independence, it has been a lose lose situation.  At 93, people are hoping when Mugabe dies, positive changes will come.
For a while, inflation was completely out of control.  Prices were not marked on goods in stores.  Once you arrived at the till you were told the price and if you forgot something and had to go and look for it, by the time you got back to the till the price would have increased- 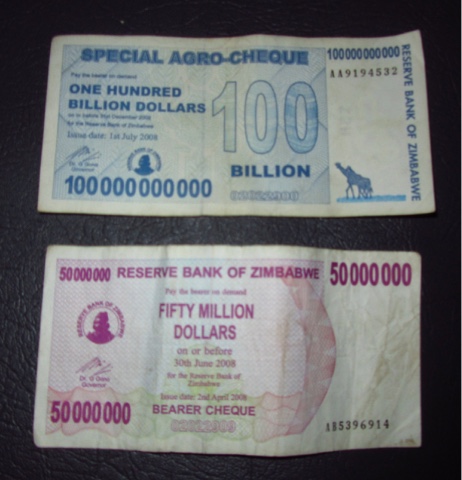 The largest bill was 500 trillion.  In 2008, one day out of the blue, the Zimbabwean dollar was no longer legal currency.  People's bank accounts were void and the US dollar, illegally, became the money of the country.
We carried on with our tour and found the Resurrection plant which appears dead when it's dry but comes back to life when it rains- 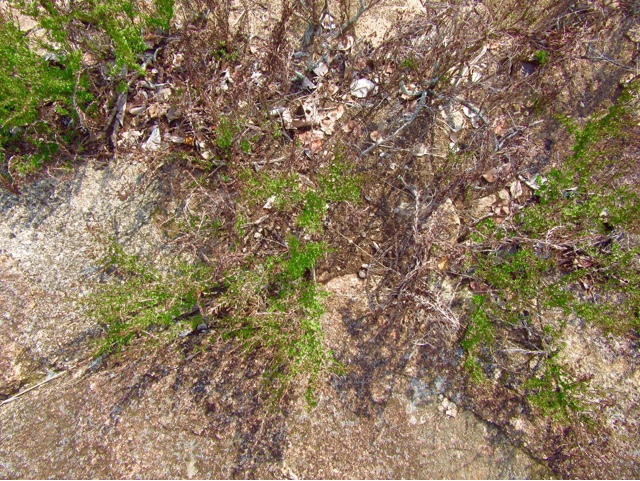 The Elephantine tree has great leaves- 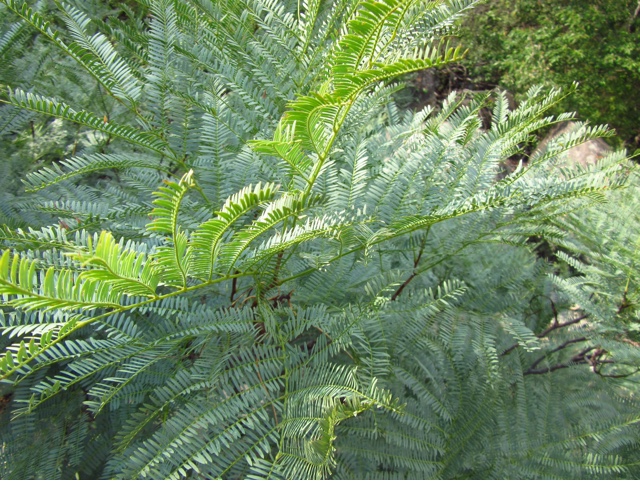 We're on the overnight train- 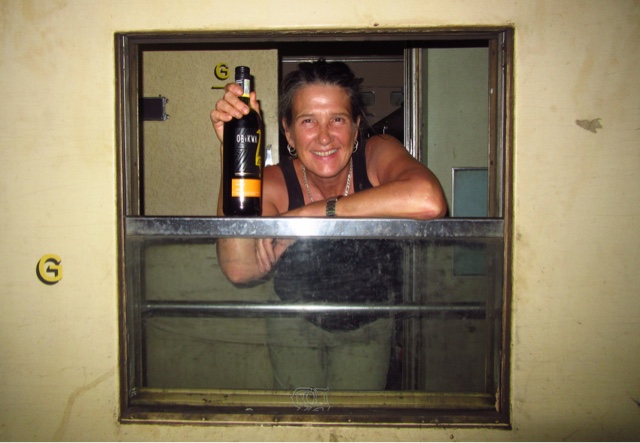 on our way to Victoria Falls.  There are 4 of us sharing a cabin - 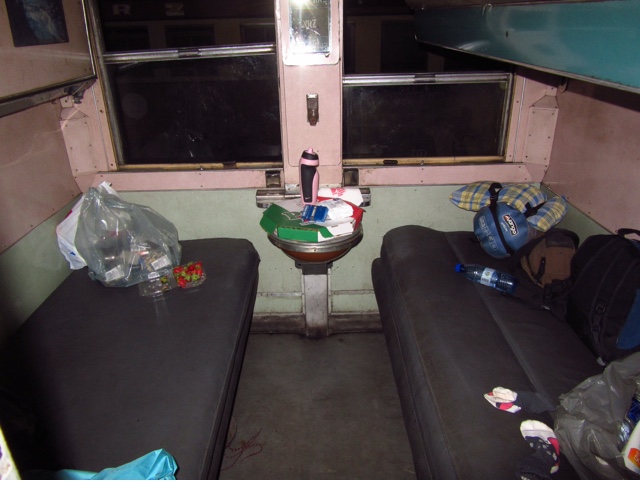 The bar is in a random cabin- 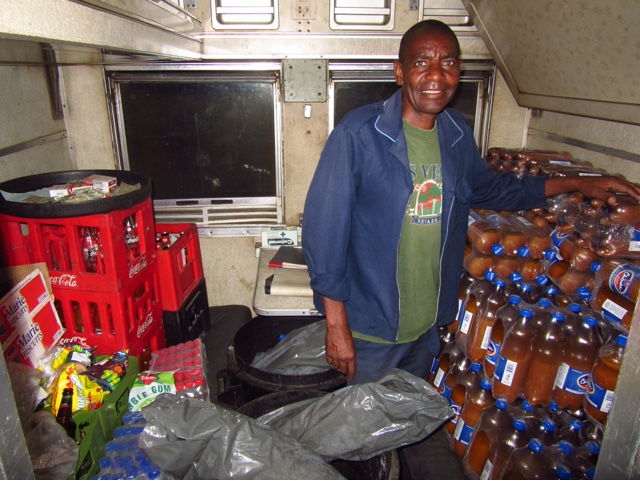 and beer and Chibuku are cheap -$1.  Chibuku is made from malt, maize and sorghum and IS IT NASTY!!!! 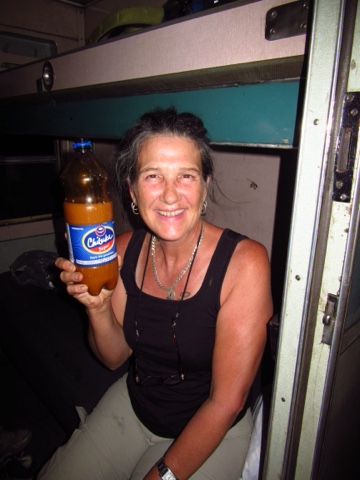 Not looking forward to trying to sleep tonight.  We're supposed to arrive around 9 tomorrow mornng but...TIA - This Is Africa and it will likely be mid afternoon!
at February 05, 2016