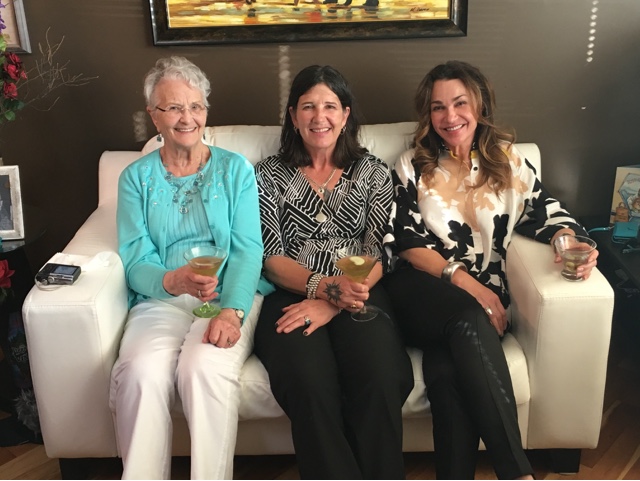 Here we are celebrating Nico #1 after burying his ashes April 30.  My sister Carolyn is on the right. Speaking of Carolyn, she is joining me for 3 weeks in February/March at Little Corn Island, Nicaragua, and Utilla and Roatan, Honduras.  I'm very much looking forward to it!
I am feeling pretty lazy.  I signed up for a hike up to Laguna Chikabal to leave at 7 am.  The early hour didn't frighten me as I'm up anyway and certainly was today.  (I awoke to the sound of running water which was really strange and then heard a few grunts.  I think mis padres were doing their Saturday morning 'chores'.  Gross.  That's how thin the walls are in mi casa!)  Anyway, it was the idea of the hike.  I hate hiking.  I like to walk around cities and on the path at home.  I like to run, either on a treadmill or around town but hiking?  There's something about it- is it that I'm bored?  That I have to constantly watch where I'm going so not to take a tumble?  It's not the exercise part, I like that.  I'm not sure.  Maybe it was 'too much' hiking when I was a kid growing up on the farm.  Sure I like nature, but ... I didn't go and I don't regret it one bit!
I didn't go salsa dancing last night either!  There was a concert in Parque Central of Christmas music by the orquesta infantil, banda sinfónica, orquesta sinfónica and finally, saving the best for last Big Band.  The first 3 groups were not so good and in typical Guatemalan style, it started late.  The crew responsible for the microphones was busy adjusting for most of the first performance and the mics still squealed and howled throughout the night.  The first 3 groups played Christmas music, which I haven't heard publicly for a few years, having been in Africa last year and Asia the year before.  I enjoyed singing along.  Big Band played songs like Satin Doll by Duke Ellington and In the Mood.  They were excellent musicians and it was obvious they loved performing.
Today I did finally leave mi cama and went walking.  Piñatas sin dulces are popular this time of year- 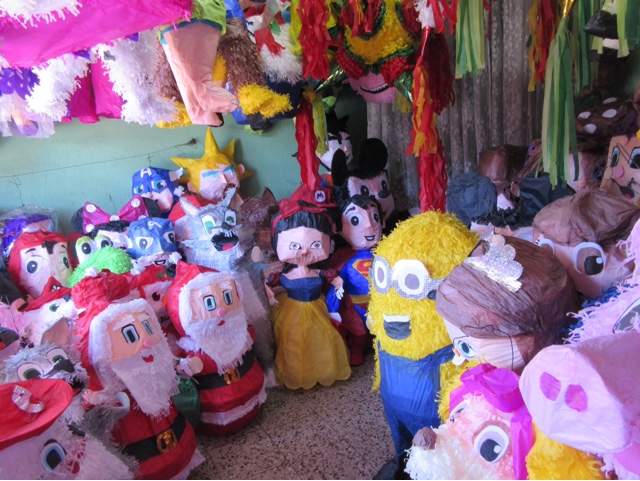 They cost about $6!
I finally ended up on a chicken bus, boring the driver to tears I am sure as I was practicing my Spanish.  He tried to answer me in English but I wouldn't let him.  I ended up in a pueblo norte de Xela called Salcajá which is famous for its textiles.  Jaspé skirt material- 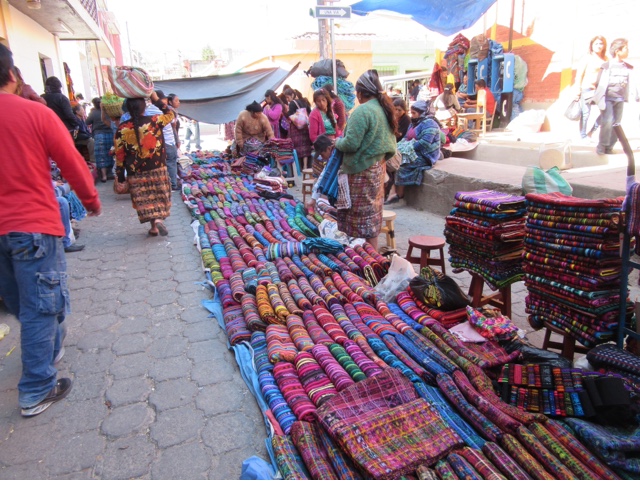 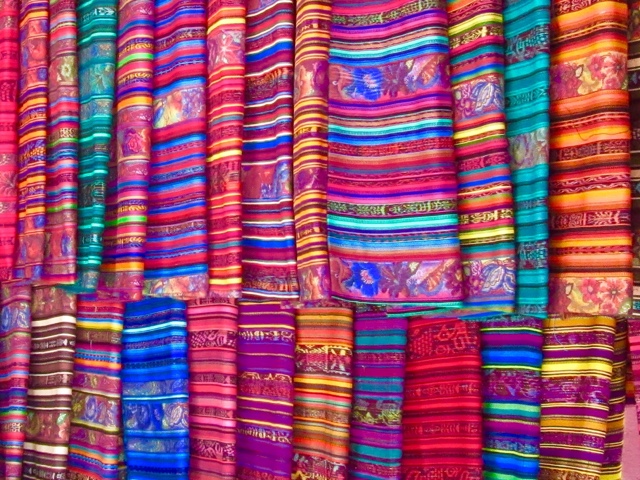 has been woven here since 1861.  There were literally hundreds of booths selling fabric and other things like the huipil blusa.  These have open arms because the region where they are worn is very hot- 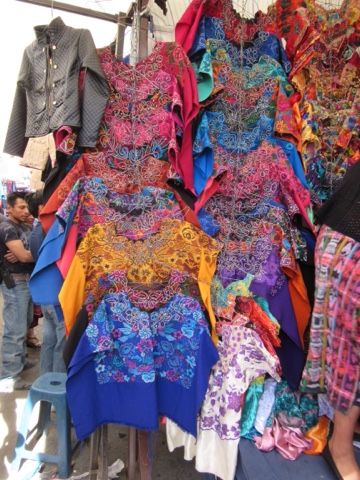 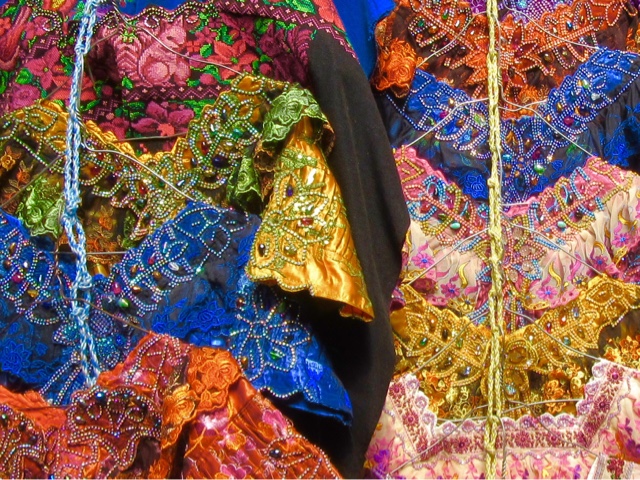 The markets are filled with hawkers selling literally everything: underwear, Christmas balls in wheelbarrows, dishes, toys, rope, fruit and vegetables, drinks, and belts- 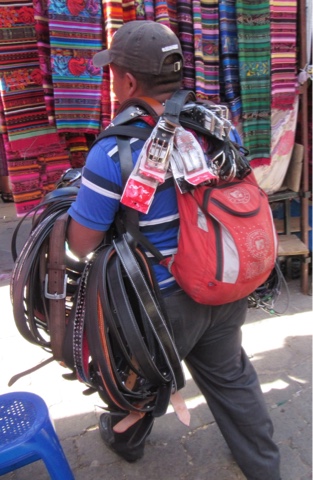 They must go home with sore throats because they yell all day.
Another reason to come to Salcajá is to see the oldest church in Central America.  San Jacinto was built in 1524 by the conquering Spaniards- 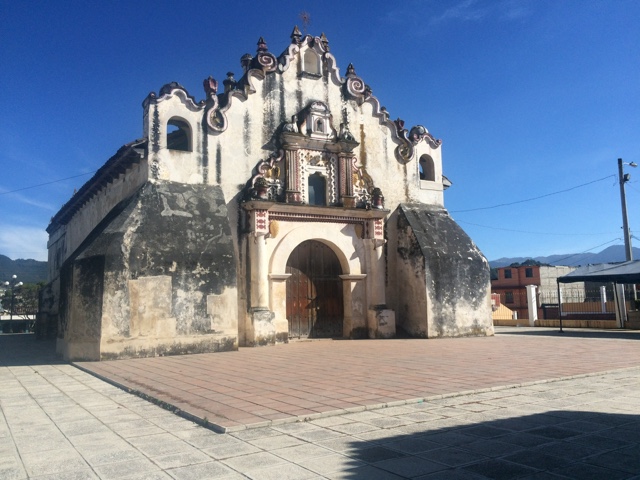 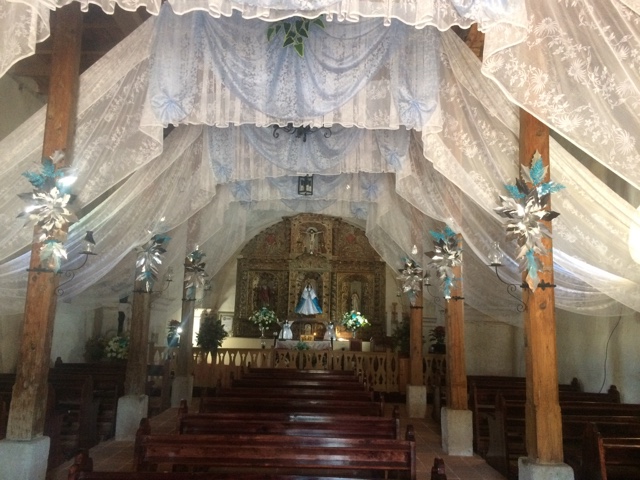 The curtains change for the religious event and white is for Navidad I guess.  There are 3 original wooden pillars inside and about 150 people regularly attend mass.
Lunch was Pollolandia and KFC better look out if they franchise in Canada.  It was soooo good.   These two drumsticks cost $2.27 and it was plenty- 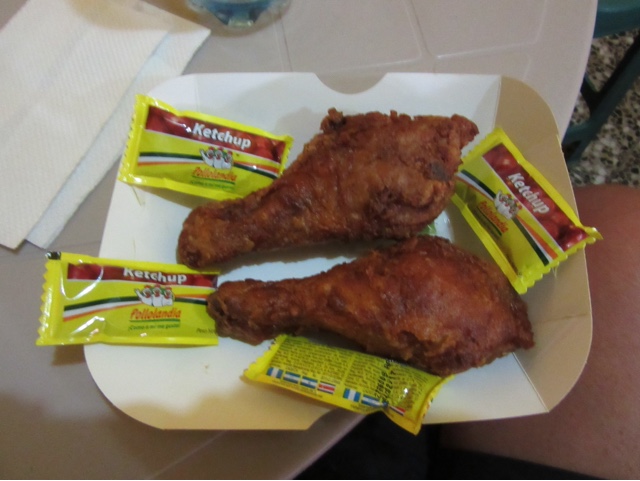 I ran to catch a chicken bus back to Xela and this time it was a wreck.  They are old American school buses-sometimes better than ones I rode in to school and sometimes worse, a lot worse!  We made it safely for 22 cents but this driver was more impatient than most.  They all drive the 60 passenger buses like they are race cars, darting in and out of traffic, slamming on the brakes, flooring it when there is open road.  It's a wonder more people aren't hurt when there are 3 to a seat, or 4 or 5, depending how they squeeze in and there are others standing in the aisles with the driver thinking he's wheeling a Ferrari!  However, it's a great way to get around!
I got off close to Walmart.  I love Walmart- 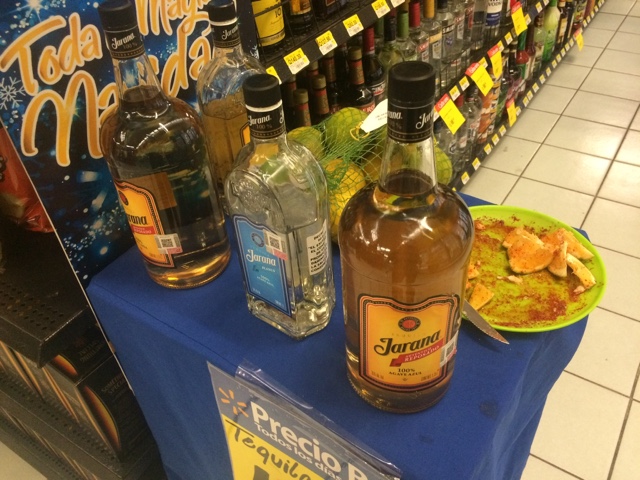 Tequila tasting with a shot of chili sprinkled limón.  This huge jug cost $17.48 and it's very smooth.
With all the delicious street taco stands, at the food court in the mall, Taco Bell has the largest lineup- 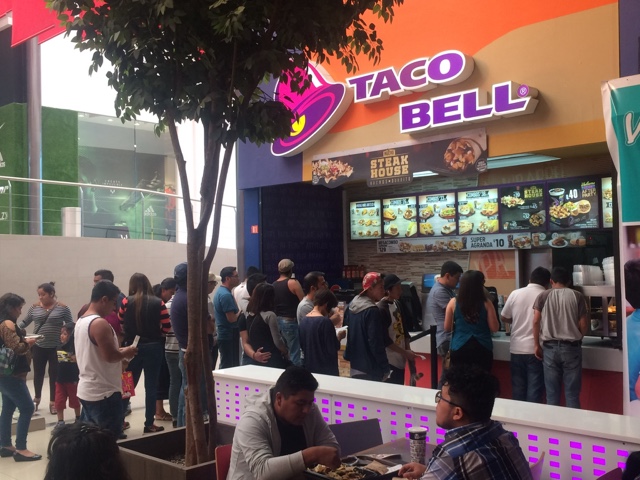 Weird!
Not sure what's happening tomorrow but more walking I'm sure!
at December 10, 2016