Leaving my family and San Pedro was a little sad this morning.  Maria tries so hard to make sure her guests are comfortable.  She is apologetic for the noise - it's constant:  musica, voices, singing, tuk-tuks, chicken buses, church bells, honking, dogs barking and roosters crowing.  Of course that is rural Guatemala and completely out of her hands.  It doesn't help either that the casa are all built with cement blocks, have open air showing around the sheets of tin that form the roof and that the windows are one pane glass.  No more is required in the warm climate, but one sure knows what their neighbors are up to.  The neighbor's bathroom was next to my bedroom wall.  I knew whenever they showered!
Of course the shuttle was on Guatemalico time, so it was almost half an hour late.  I sat on the curb in front of el Parque Central, hoping there wasn't confusion with the driver and where to pick me up.  As I watched the chicken bus pull away, headed in the same direction as me for $6.18 as compared to $28.25, I did question my choice, however eventually it showed up and it was a much more comfortable 2.5 hour ride.  In Xela we got let out at Parque Central and so I walked towards where I thought my house was.  I live on Diagonal 10 which means it isn't a Calle (street) nor an Avenida but rather a cut through street.  On both maps, there is Diagonal 9, 11 and 12 but no 10.  A kind man in a pet food store called mi casa and we found out I was only about a block away.  Eunice was standing outside waiting for me.
Not only does Eunice- 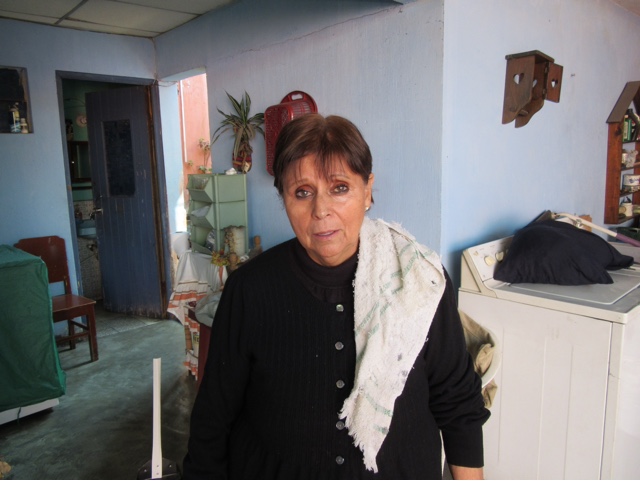 take in Spanish students, she has a lavanderia- 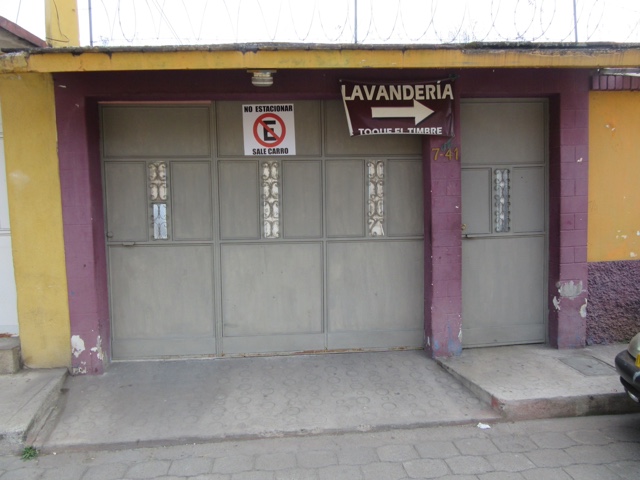 Inside is a large space for parking and drying clothes- 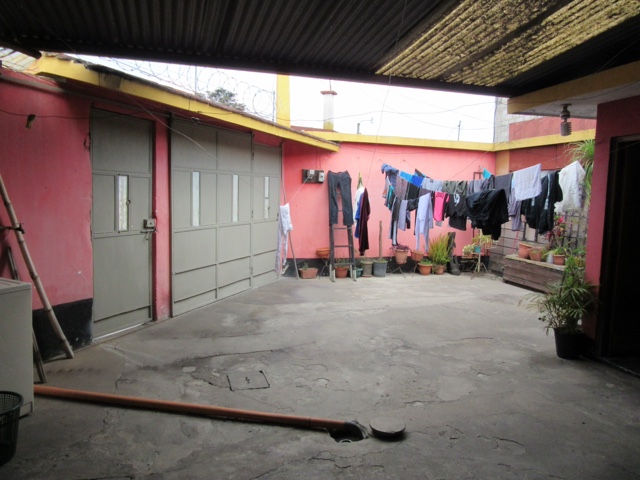 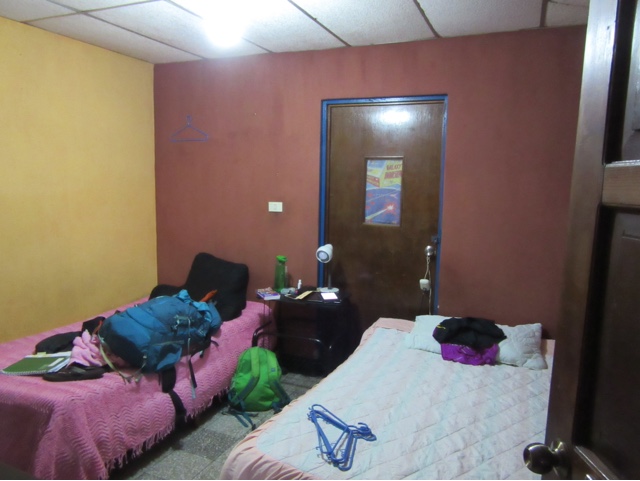 Even has a tv- 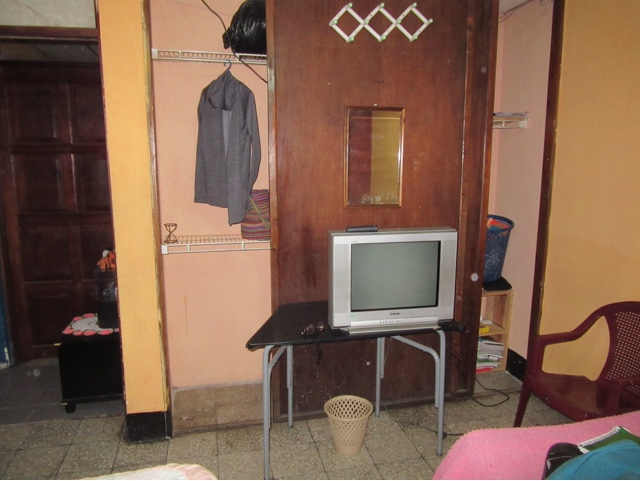 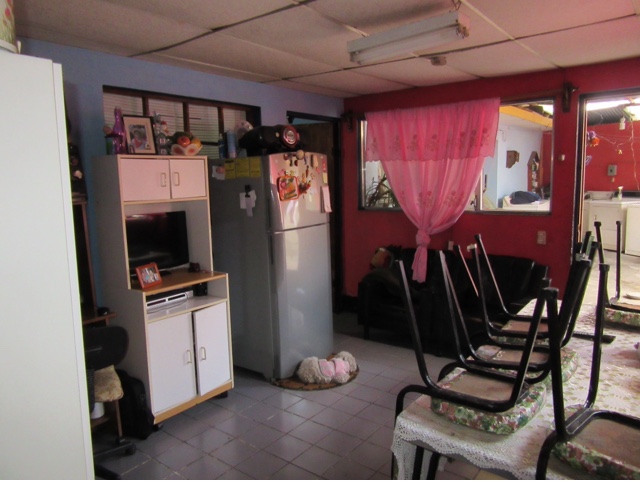 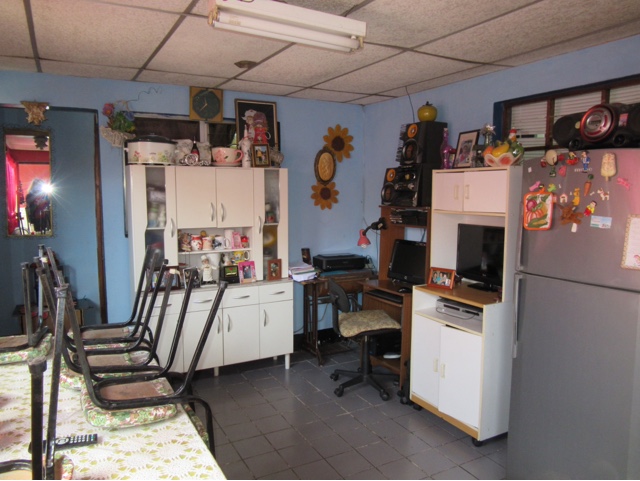 Is separate from the kitchen- 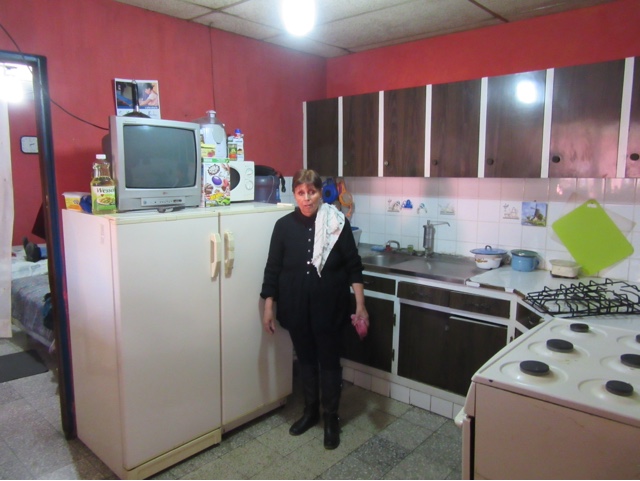 The bathroom is typical- 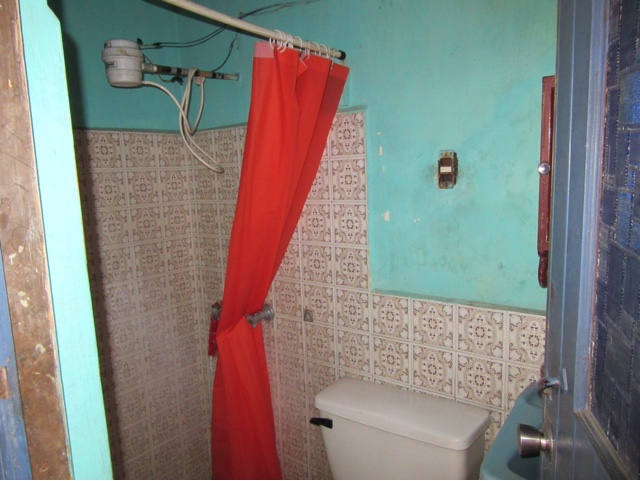 Fernando, Eunice's brother, teaches Spanish via Skype and has a bedroom in the casa.  Shelby, Eunice's granddaughter, works with the clothes when she's not at university.  She is in her final year of law.  They have 5 washing machines!  So far in Guatemala, the only wash I've seen done has been by hand!
After getting settled in, I went walking and found el puente de los chocoyos.  It was built in 1800 so people could get over the flooding street.  It is named after chocoyos which are green birds similar to parakeets that are apparently sold nearby- 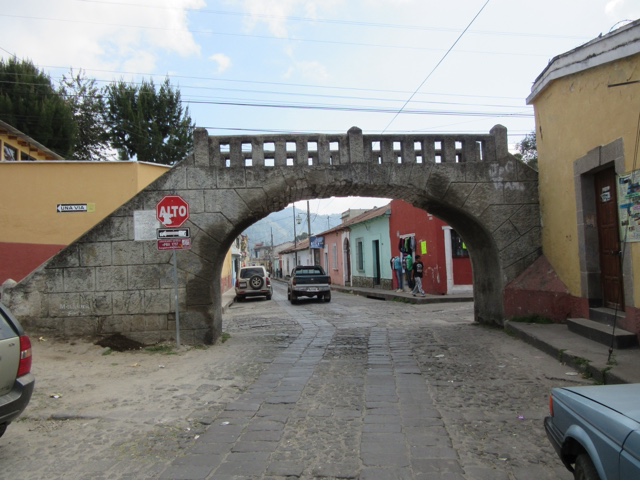 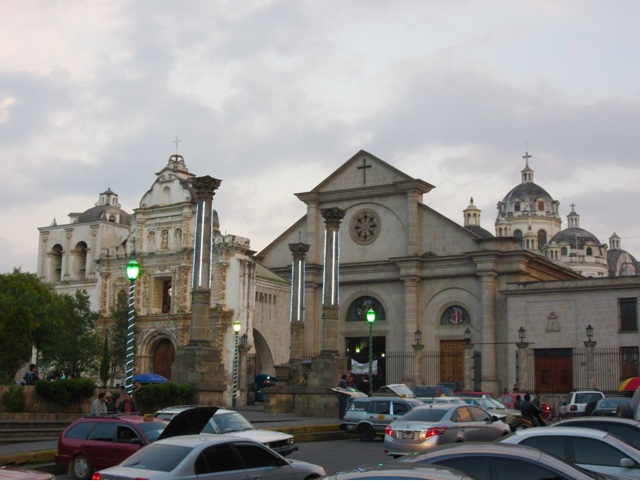 Just the facade is left of la Catedral Espiritu Santo- 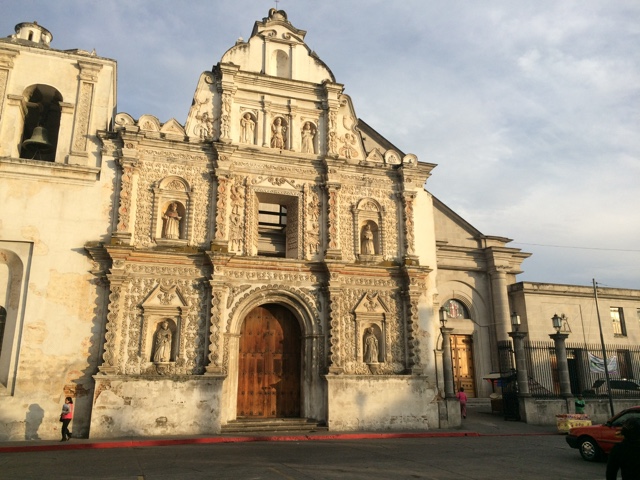 It was built in 1532 by the Spaniards so they could convert Mayas to Christians.  The modern church is behind on the right and is in gothic style- 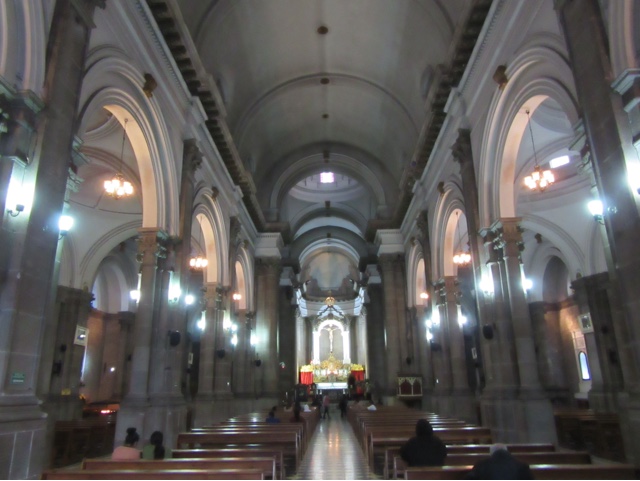 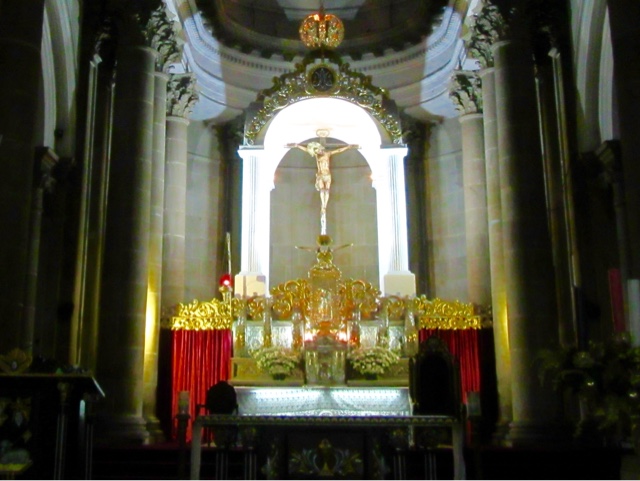 There are always lots of fresh flowers, Jesuses hanging from the cross and bright lights.
The sidewalks and streets are quite smooth and walkable so I carried on.  A funeral procession was on its way to the cemetary- 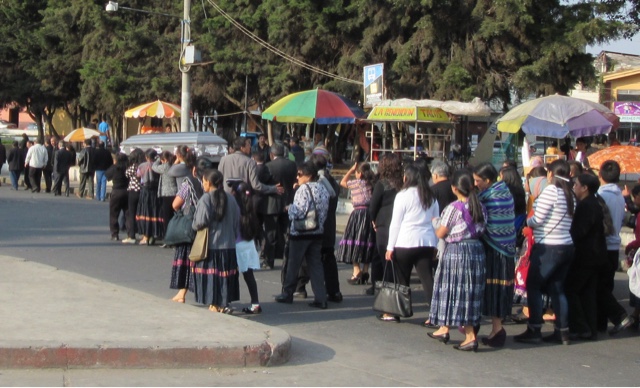 About 20 men walked ahead, dressed in black.  10 women carried the coffin and were followed by other women and children.  All traffic and people stopped and waited until they passed.
Thanks to Gallo (a beer company), there is a huge Christmas tree on display at a local square- 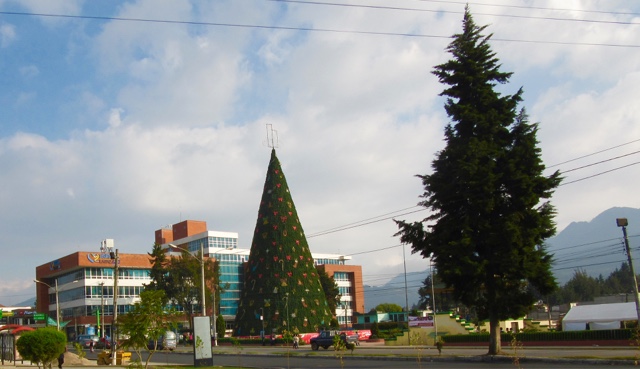 Believe it or not, there is a Walmart and Centro Commercial about a 45 minute walk from my homestay.  Both are very large, modern and American looking.  There is a 5 screen ultra modern theatre but the Hollywood films are in Spanish.
I wonder how they get away with this? 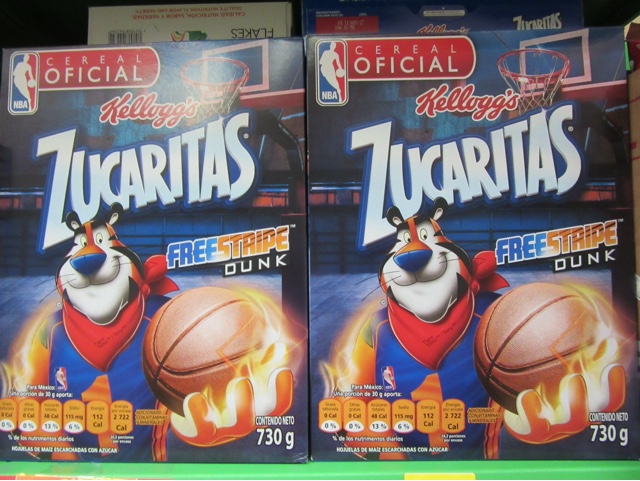 Obviously Frosted Flakes but 'azucar' means sugar in Spanish!
In the mall are stores like Radio Shack and Payless Shoes.  Food court restaurants include Dominos, Taco Bell, McDonalds, Burger King and Subway!
Santa was even there and I was tempted to sit on his knee like Nico did today- 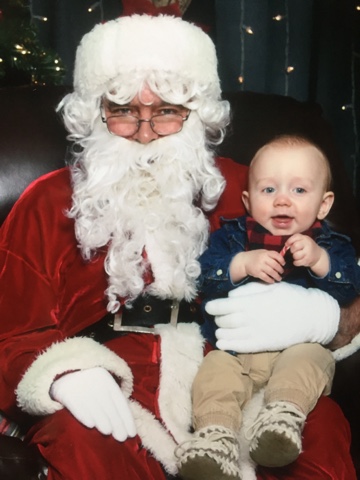 He wasn't scared a bit.  Probably relishing in the idea of how spoiled rotten he's going to be throughout his life and just taking it all in!
Back to the mall:  It's kind of sad because it is not the Guatemalico culture that I've enjoyed these past 5 weeks but at the same time, they want what we North Americans have and why shouldn't they have it?  I'm just glad I've seen another part of the country.  Most of the people I have met and lived around would NOT be shopping here because they could not afford it.  However, the place was packed and just about NO ONE wore traditional clothes.  I could have been in downtown Saskatoon.
To get home, I took a collectiva which passed by the chicken bus terminal.  What a sensorial overload! Workers holler out where their bus is going, the noisy diesel motors create clouds of black exhaust, horns that sound like locomotives blast as buses pull away, hordes of people carrying boxes and bags or balancing baskets on their heads push through the crowds on the sidewalks, and garbage is everywhere.  I couldn't wait to get out of there- 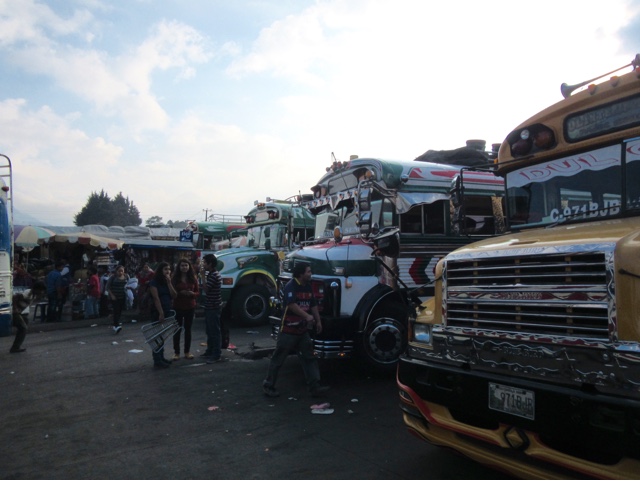 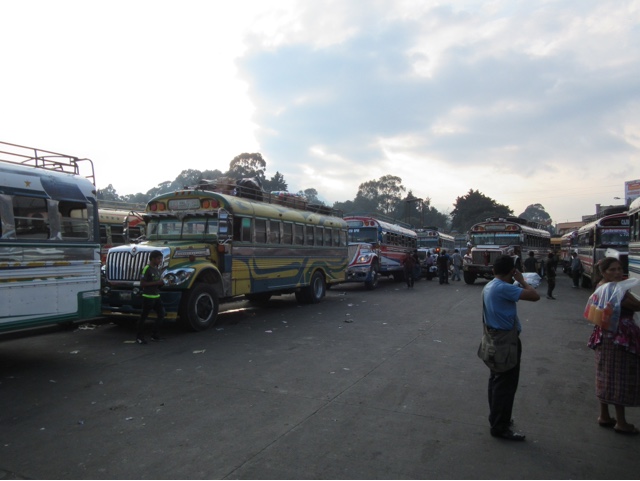 We'll see how things go this week and what the school's like.  Maybe I'll only stay a week and try to get back to Antigua to my same bedroom and teacher for my last week of study.  Time will tell.
at December 04, 2016