Dave, Bill and I rented a Chevy Tracker to go to Caracol, the largest Maya ruin in Belize- 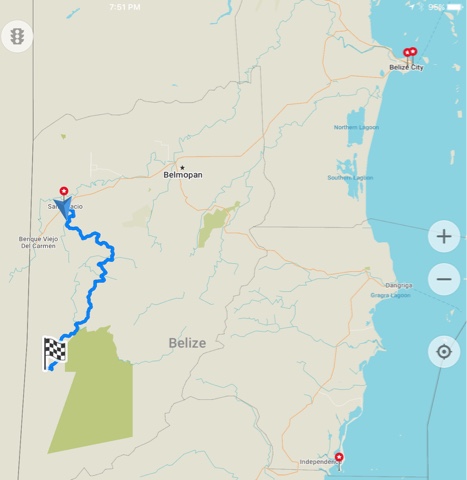 We were told we had to enter Mountain Pine Ridge with a military escort but by the time we got to the departure point, they had already left.  We were still allowed to make our own way.  To begin with, the trees were deciduous- 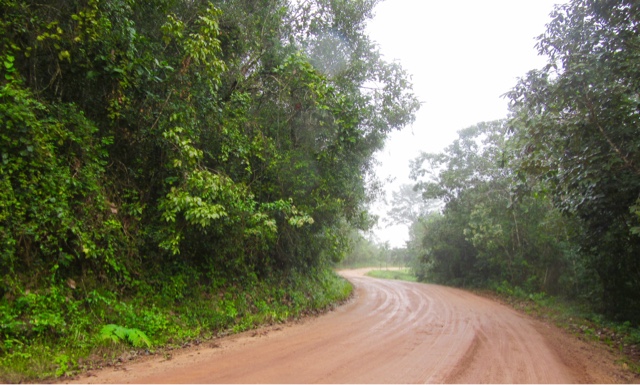 And then as if by magic, became coniferous- 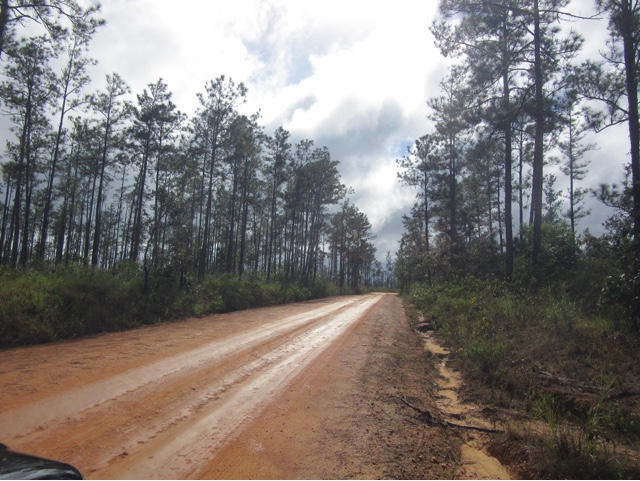 then back to deciduous.  The roads were horrific, filled with potholes and erosionalf crevices.  It didn't help that we had a broken front left tie rod so Bill and Dave drove very carefully and slowly! 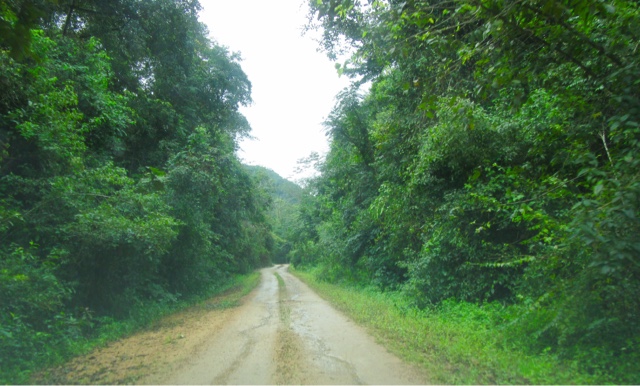 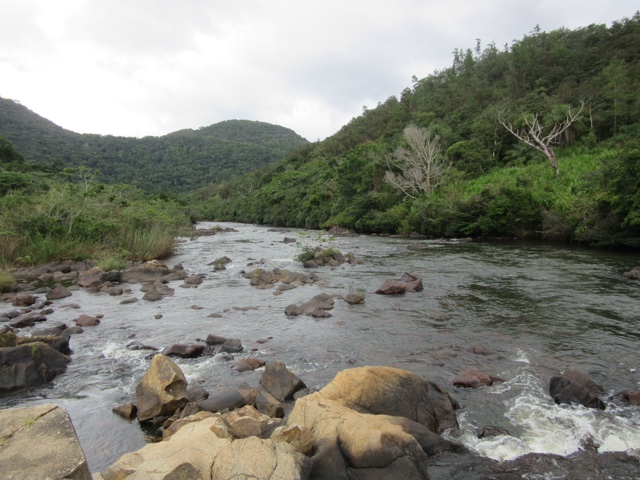 The ruins were first discovered in 1937 and the first visible stone monuments were recorded in 1950.  Most of the original stelaes are in the University of Pennsylvania. 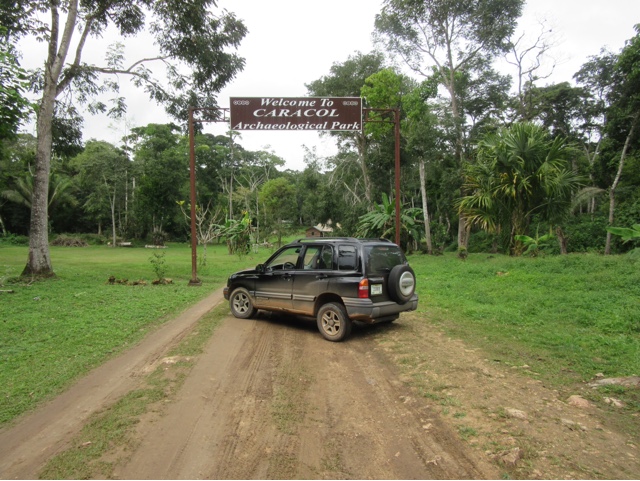 The site dates from around AD650 and Caracol might have been as large as 70 square miles.  There are over 40 miles of roads and they think there might have been as many as 150,000 people living here.  There was no water supply so they built large reservoirs.  Farming was done on terraces.  Approximately 5000 of 36,000 structures have been found.
Caana (Sky Place) is 141 feet high - the tallest structure in the whole country!  It is believed it was completed in AD800.  It contained the remains of a woman, possibly Lady Batz' Ek who married into the Caracol dynasty around 584.  Looking up- 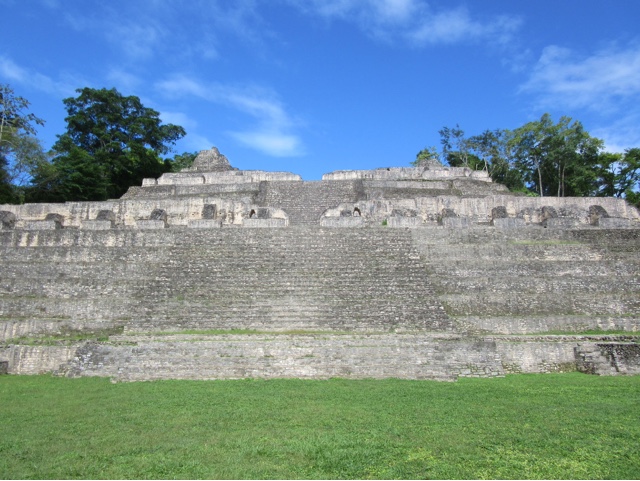 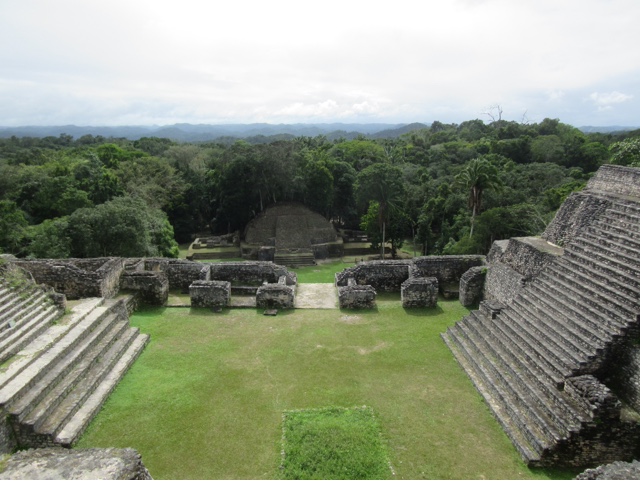 The pyramid to the right of Caana- 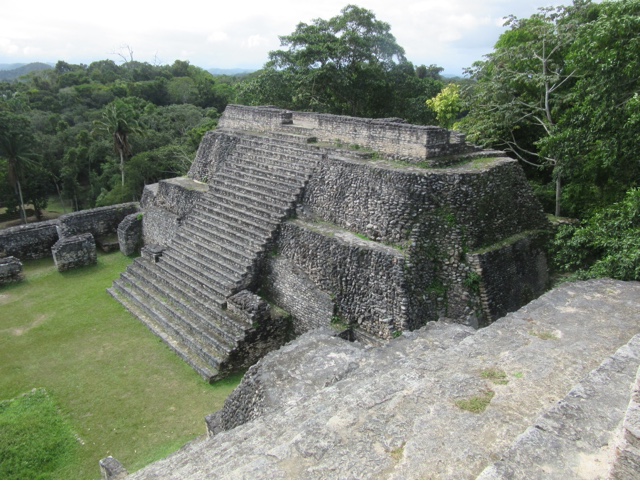 And to the left- 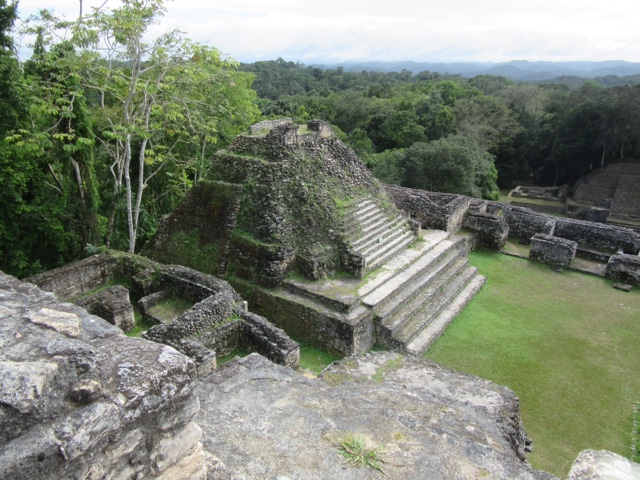 The pyramid directly across from Caana- 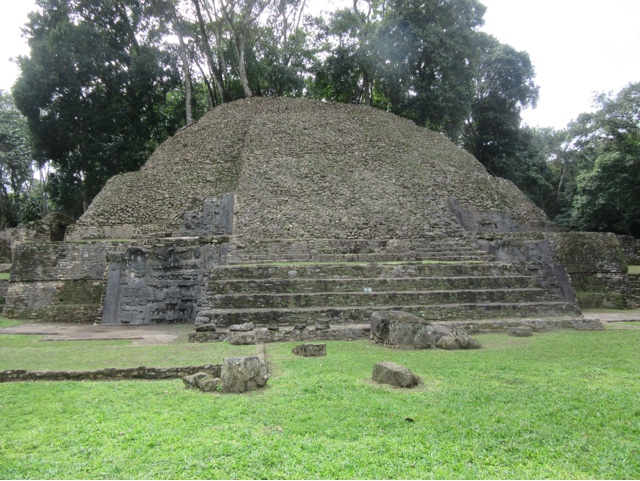 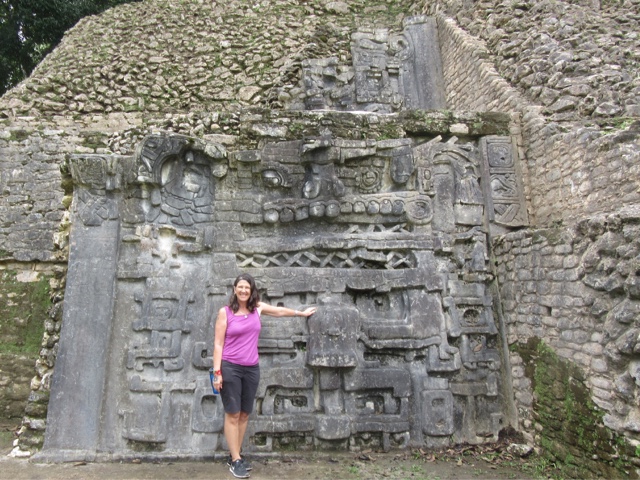 During the late Classical Period, people used personal ceramic caches modelled as human, God and bird heads and lip covers that were placed one on top of the other.  Human fingers were found inside the lip covers- 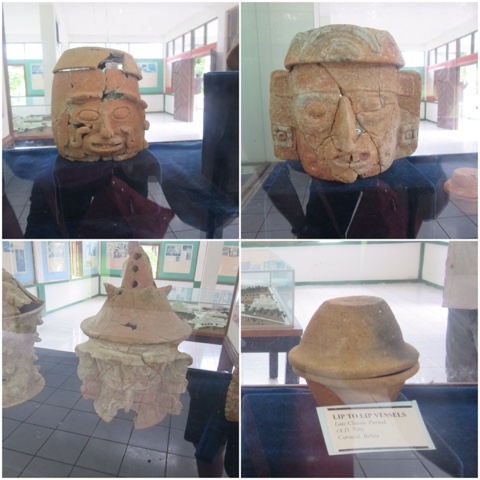 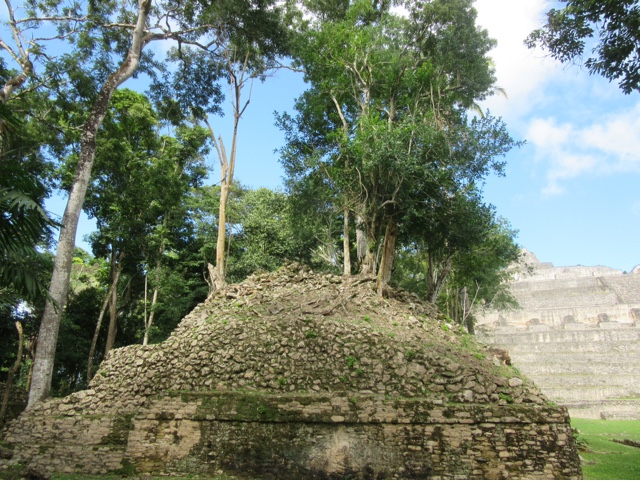 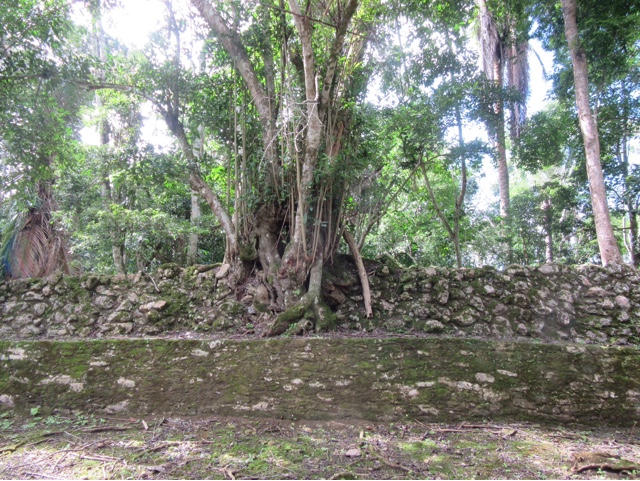 There are a few original stelaes- 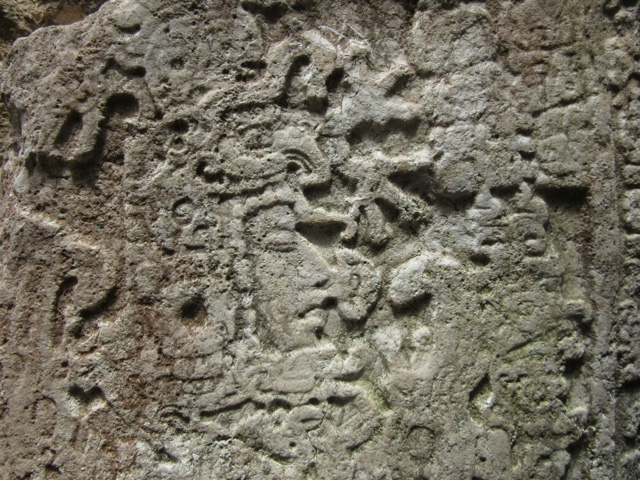 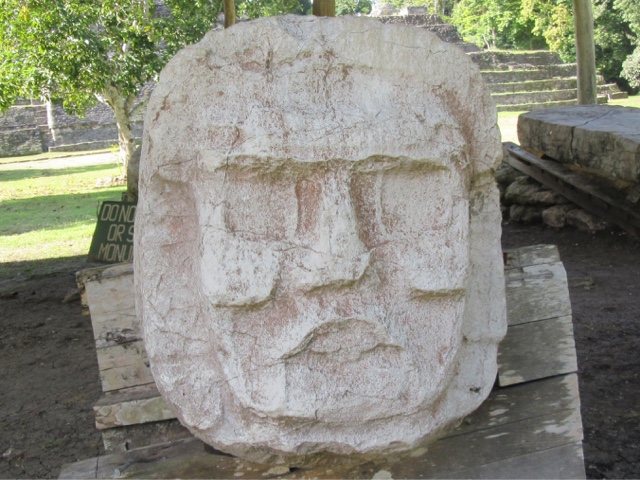 The base of the cedar tree is huge- 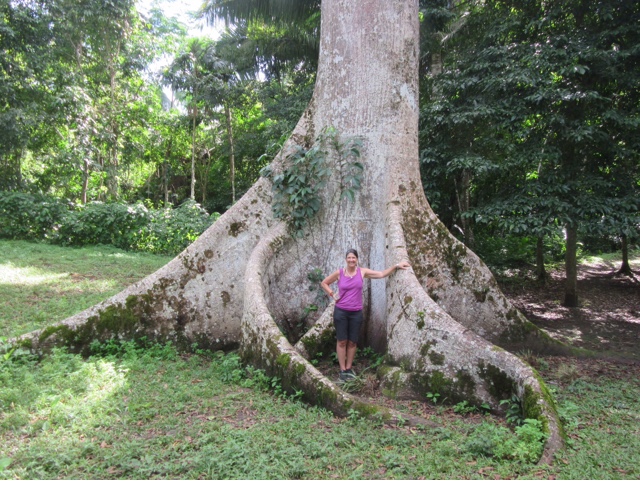 On the way back, we stopped at Rio Ponds for a swim.  The water was fairly warm once you got used to it and we were happy to know that it's barely off the main road- 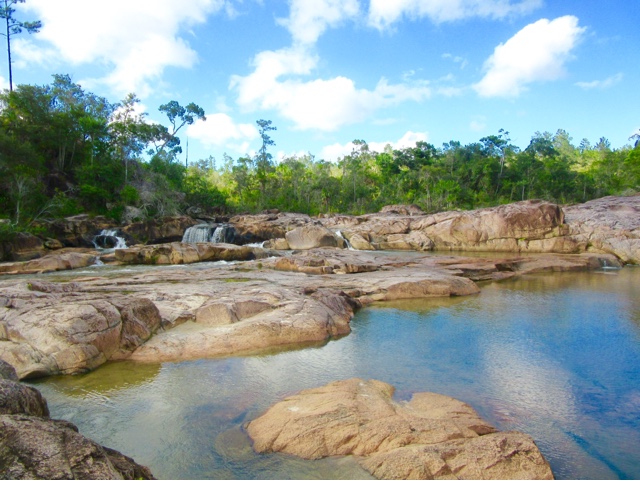 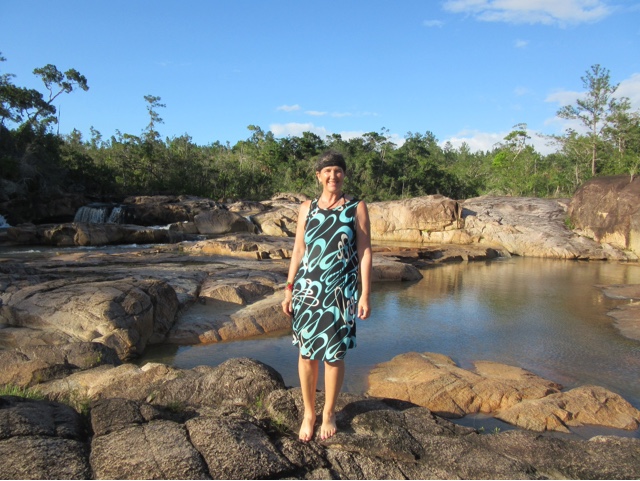 A sign indicating one of the many speed bumps!  Luckily, the only bumps we went over were made of asphalt! 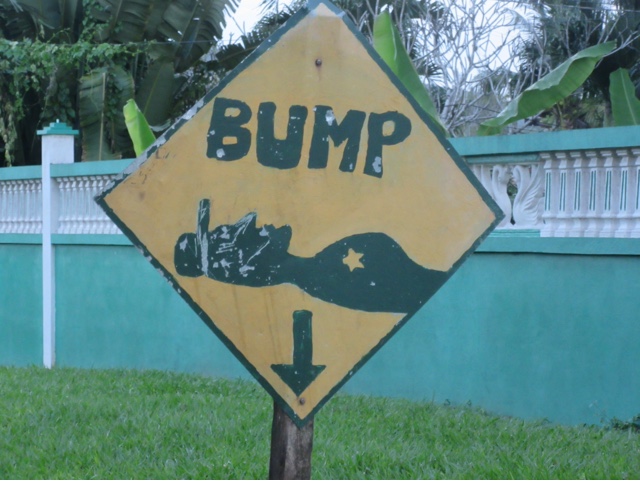 It was a good day in spite of the long, ugly drive.  I think it is worth going to Caracol but I would have liked to have had a guide explaining things even though I have a hard time remembering all the information!  In renting a car, we saved a lot of money, but it's important to make sure you have a good vehicle - a 4x4 is not required, unless it's been raining a lot but a good suspension is.  A Tracker is not the way to go!
Tomorrow might just be a chill day!
at January 15, 2017