There were more parades today: one at 7 a.m. and the second at 11 a.m.  It's always the same tall woman- 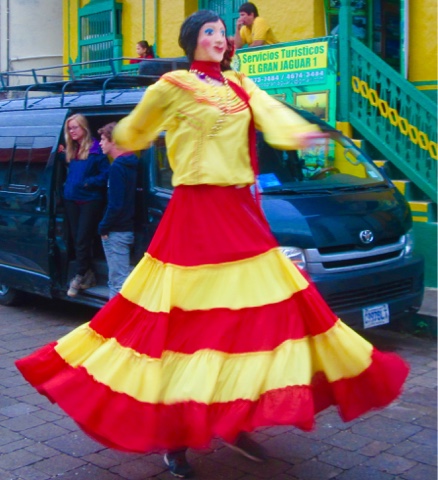 With a colorful animal behind- 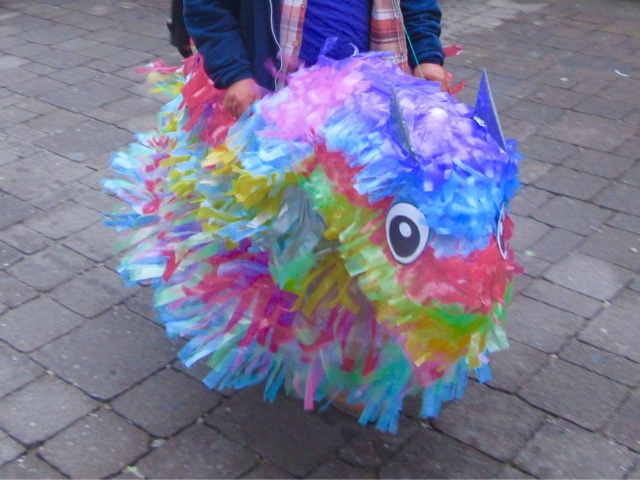 But in the second parade, there was a second woman-

The first parade had only a marimba and a small crowd- 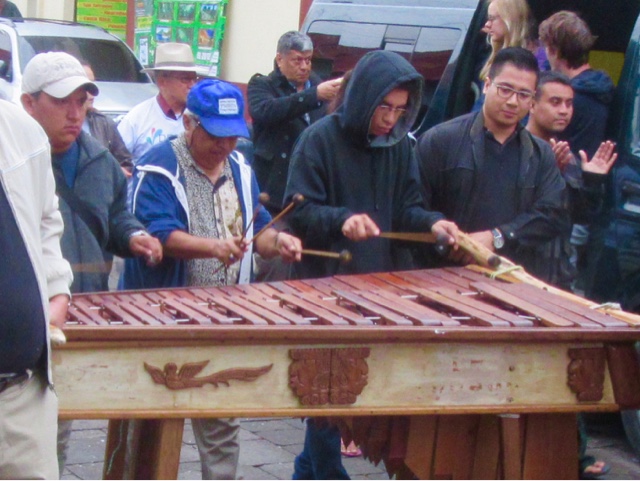 But the second had a full band and lots of walkers, all wearing the same t-shirt- 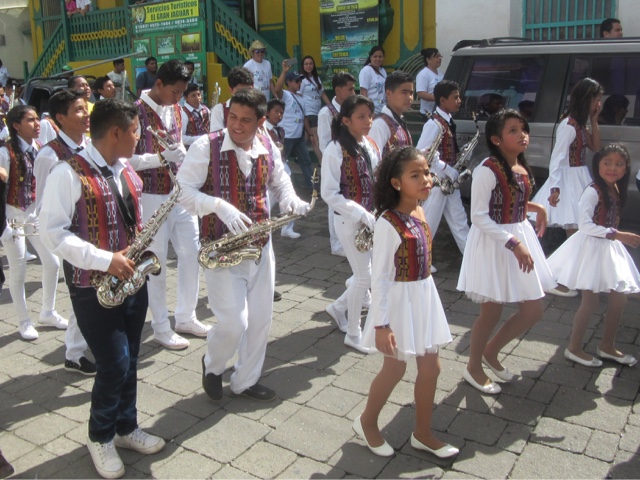 I went to Tikal on the sunset tour, (which thankfully only cost an extra $3.50 because it was cloudy so there was no sunset to be seen).  I have to say I was unimpressed.  Maybe it's because I've seen some excellent ruins-Ephesus in Turkey, Petra in Jordan, Bagan in Myanmar, Machu Pichu in Peru and the pyramids in Giza.  Not sure, but I've been here 3 days and haven't had the urge to go.  Oh well, I've seen it and know why my intuition was stalling me.
It is estimated that between 90,000 and 120,000 people lived at Tikal from 600 BC until 869 AD.  There are numerous theories about what happened to end this city.  A couple are that they ran out of resources or there were fights among the people so they went their separate ways.  It doesn't make sense that disease killed them because there haven't been a lot of graves and bones found.  There is a huge area that they think was used as a water reservoir and Tikal is in the rain forest, so drought wouldn't have been an issue.  No one really knows for sure what happened.  I did however, ask our guide a boneheaded question.  I have been in Guatemala over 8 weeks.  I have lived with Maya families, been taught Spanish by Maya profesora and eaten Maya food.  I asked our guide what happened to all the people that lived at Tikal.  He went off on a tangent about indigenous rights and repression.  I felt stupid because I know where the Maya are - 40% of the population of Guatemala is Maya.  I'm not sure who I was thinking the Maya were while visiting Tikal but I know now!
A powerful dynasty of approximately 30 rulers ruled Tikal over the years.  Today's structures date from 550 AD to 900 AD but 90% have been rebuilt.  When discovered, the structures were all covered with dirt, grass and trees- 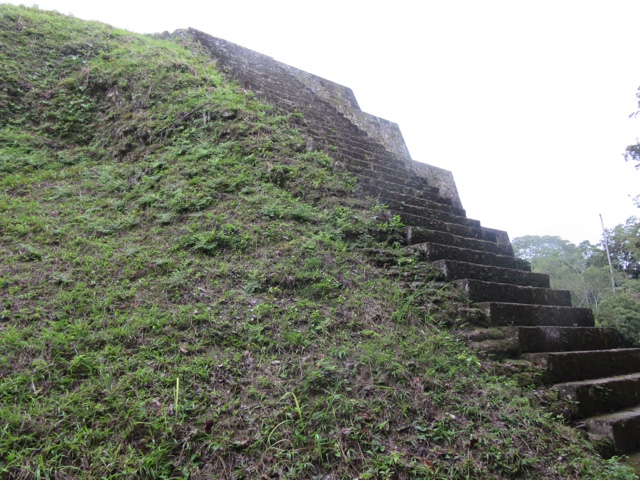 It is possible to climb all of the structures.  The stone stairs are a big stretch, something I find interesting because Maya people are not tall.  A couple of the pyramids have wooden stairs that make climbing easier.  It's a steep way up and down- 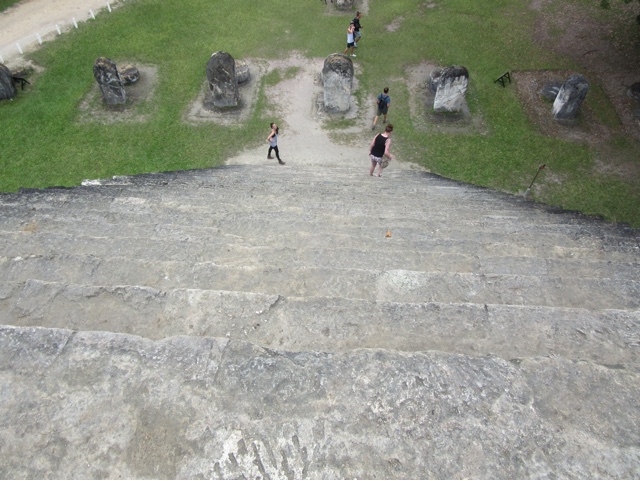 The Great Plaza's earliest foundations date from 150 BC and the latest 700 AD and contain Temples I and II, as well as the North and Central Acropolis.  In the North Acropolis, there are 100 buildings piled up and the rulers were buried here until Ah Cacao built his own pyramid.  Many stelae were found buried underneath as well as the remains of rulers Stormy Sky (457 AD), Great Scaffold Shark (1st century AD), Great Jaguar Paw (379 AD) and Curl Nose, who ruled after Great Jaguar Paw- 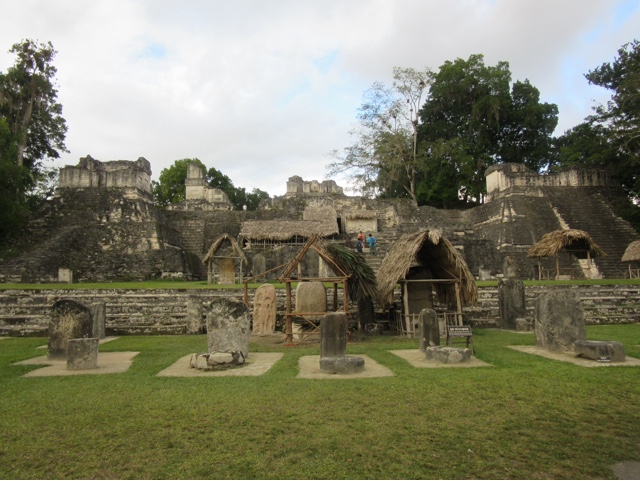 Temple I, or Temple of the Jaguar, is on the east side of the Great Plaza.  It's 44 meters tall and was built by the ruler Ah Cacao who ruled from 682 AD to 724 AD.  His skeleton, along with many jade pieces and other valuables was discovered in 1962- 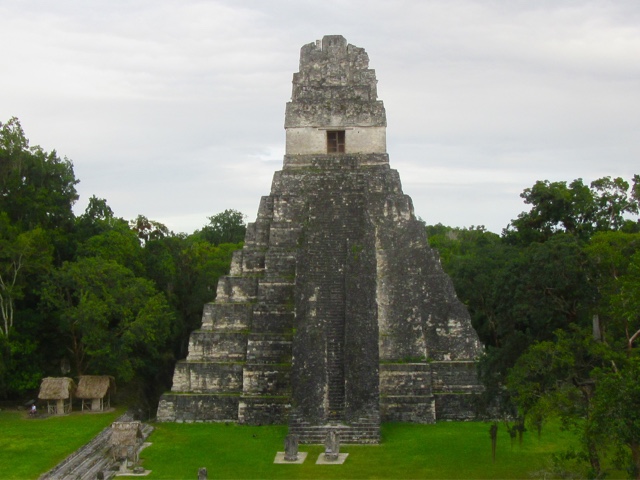 Temple II, Temple of the Masks, is on the west side of the Great Plaza.  It's 38 meters tall and was also built by Ah Cacao- 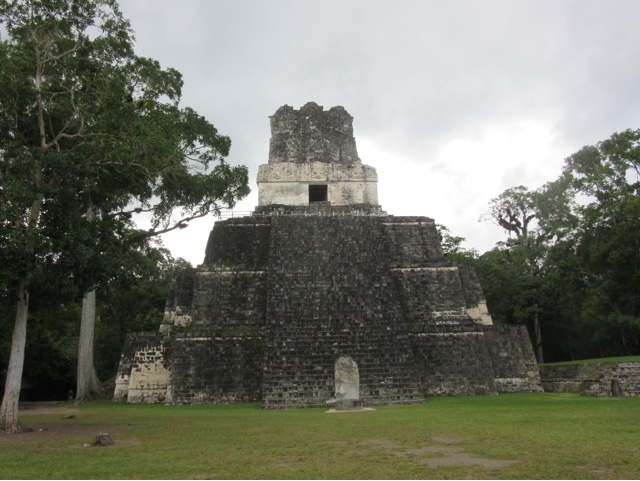 The lintel above the door of Temple II, Temple of the Masks, shows a woman wearing a cape and this might have been Ah Cacao's wife- 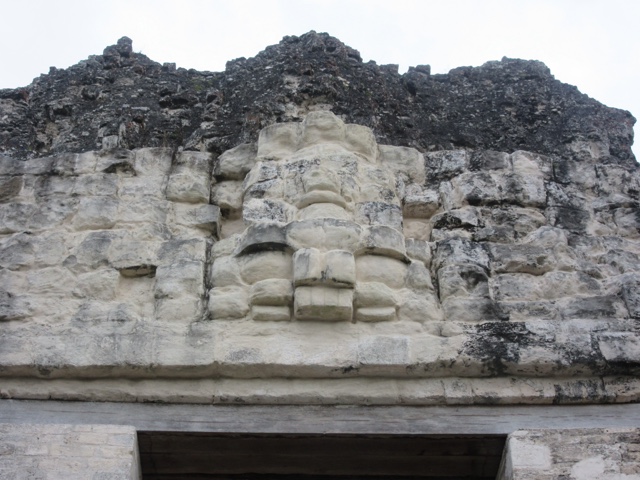 Temple II, the Great Plaza and Temple I seen from the Central Acropolis- 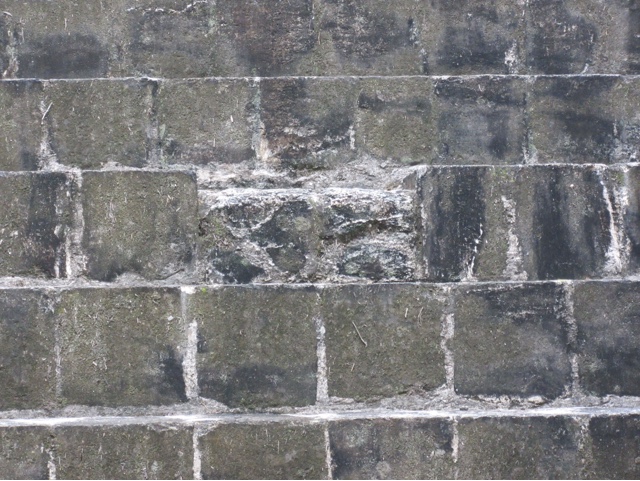 We climbed Temple IV, Temple of the Double Headed Serpent, which is the tallest at 70 meters.  It looks eastward to see Temple I and II- 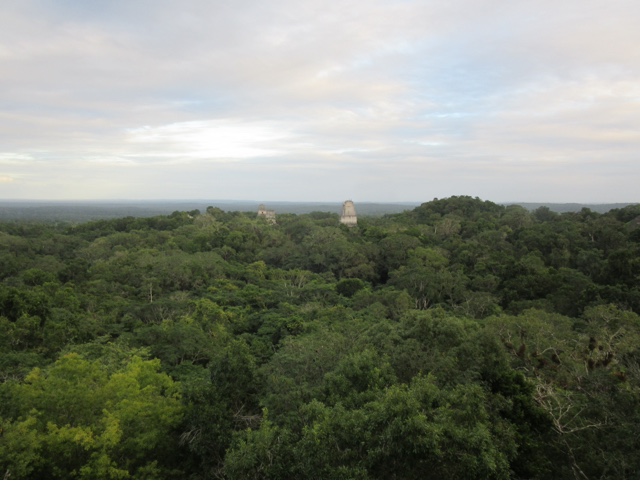 When I decided it was time to move from the east side of Temple IV to the west side, I stood up and picked up my backpack.  My camera was sitting on top and it tumbled down the steps, landed on the walkway, but CONTINUED!!!! over the edge!  Luckily it stopped about 6 feet below on another step.  Even though it 'jumped' out of its case, IT STILL WORKS!!!  How lucky is that!
Armed guards roam the park.  I'm not sure why because there isn't really anything to steal or destroy- 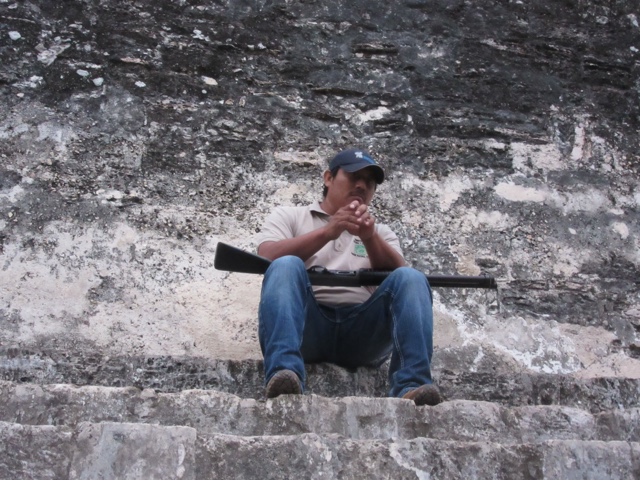 There are many white nosed coati roaming the site.  They are related to the raccoon family- 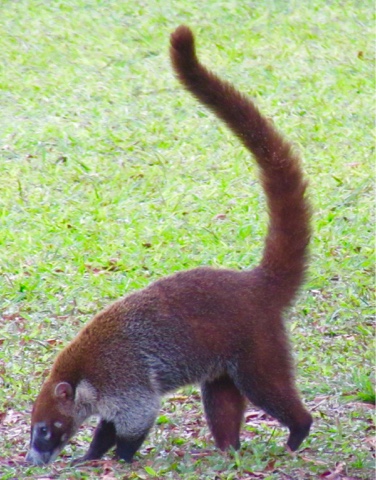 After waiting for the sunset, which never appeared, we walked out of Tikal in the dark.  Riding home on the bus, a local Maya woman sat beside me.  She was catching a ride home after a long 12 hour shift at the market at Tikal.  She says sales have been very slow the past 8 years - there are few tourists and those that come aren't buying.  She lives an hour each way and works 7 days a week!  She was dressed in traditional clothing and was going home to a cena typica of frijoles and huevos!
The Spring Fiesta continues and Parque Central is hopping in the night.  This man was wearing one of the wooden 'cow' structures I saw in Nicaragua.  It's covered with firecrackers, shooters and fireworks.  The safest person is the one wearing the contraption.  It shoots into the crowd so you not only hear it exploding, you see people running away.  It was crazy to watch- 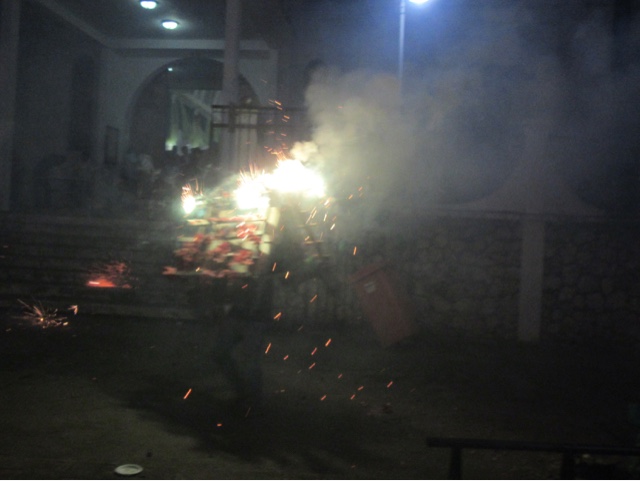 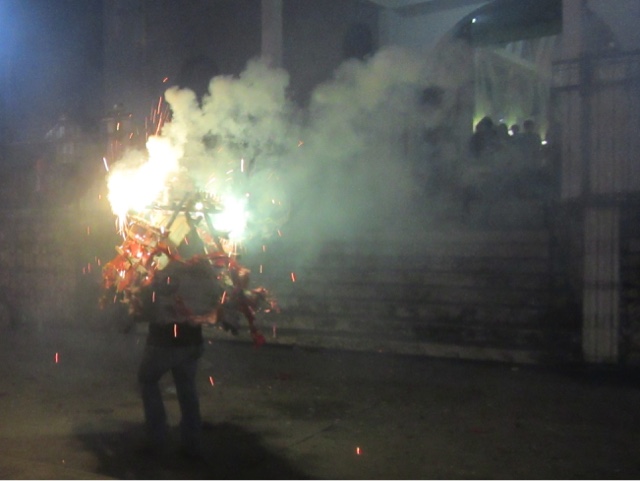 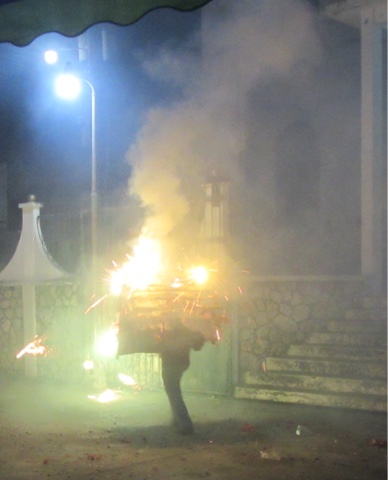 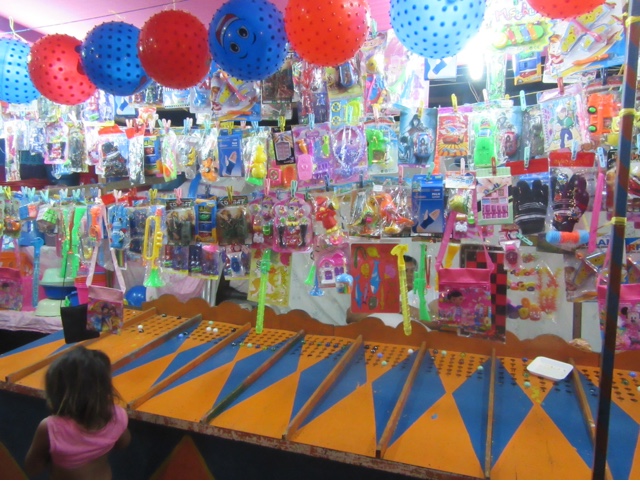 And toys to buy- 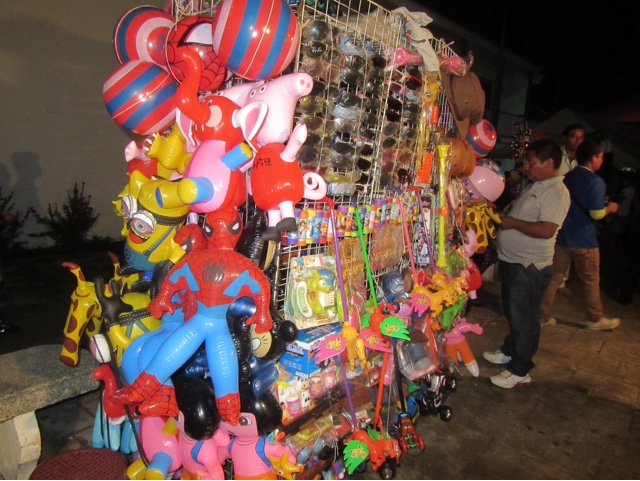 Food booths include peeled oranges and other fruit- 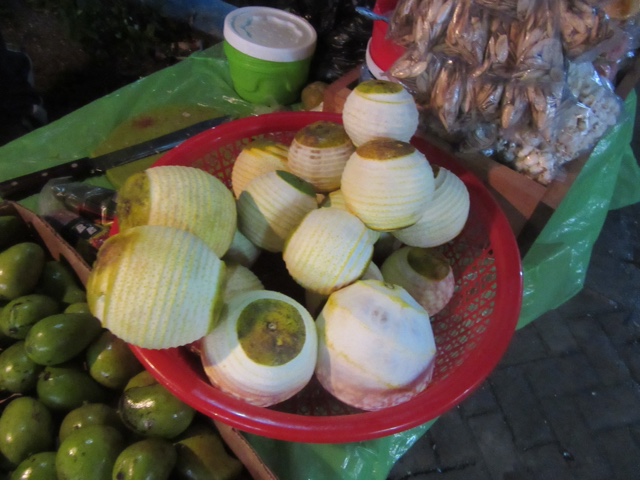 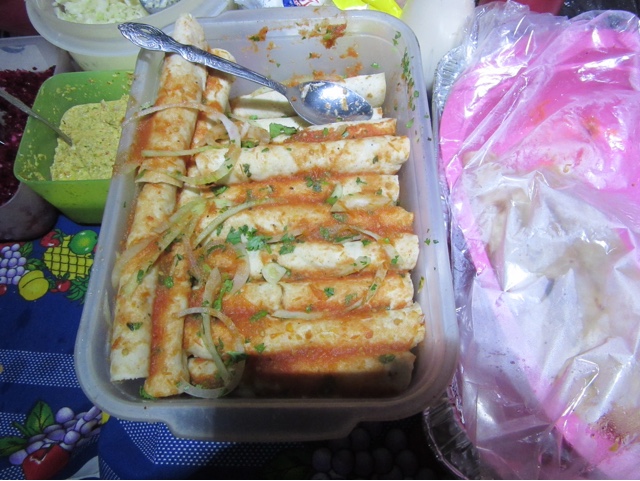 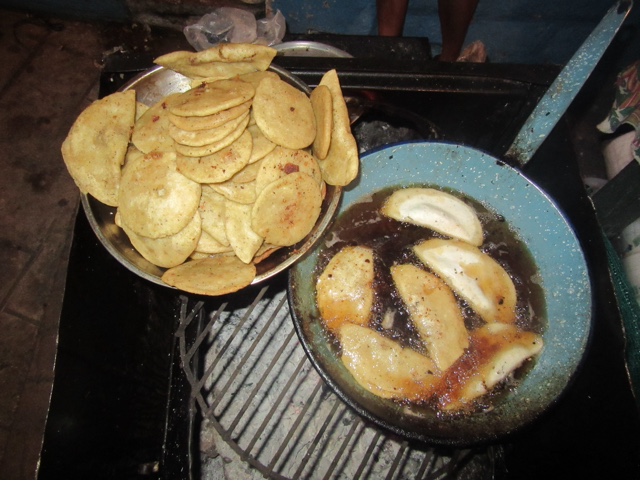 and of course fried chicken and fries- 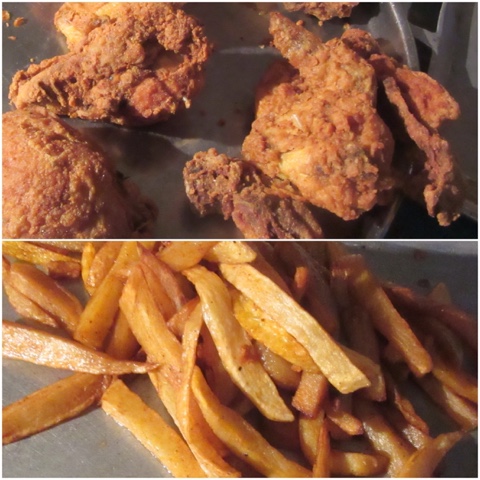 Live bands play traditional music and last night, the Reina was crowned and then there was theatre from 9 pm to midnight.  Loud bombas went off at various times throughout the night.  Again, someone was on the tin sheeted roof right next to my bathroom window, setting off explosives around 4:30 this morning!  I'm kind of getting used to it and like I tell the other tourists here who are shocked by the noise, it's nothing compared to what went on in Nicaragua over Christmas and New Year.
Tomorrow, I'm looking forward to a lancha ride to a nearby island where there is a great view of the rooftops of Flores!
at January 11, 2017