I have had a great day!  It rained for most of the morning, but my friends, Dave and Bill - how American is that?  came for coffee.  About noon, I decided to visit Cahal Pech, another Maya ruin site.
It is thought to have looked like- 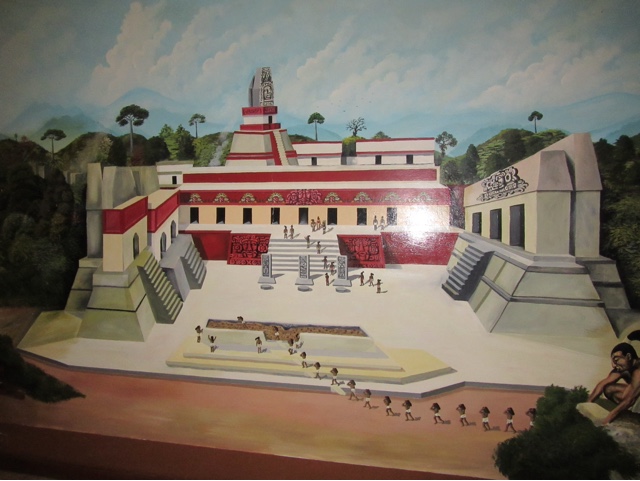 It doesn't quite look like this today!  The left side- 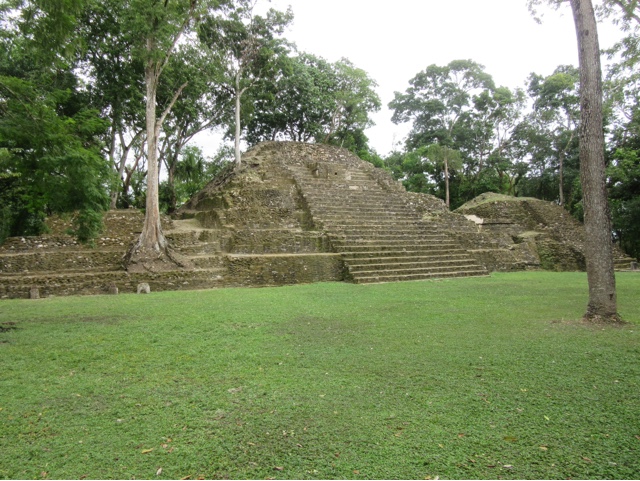 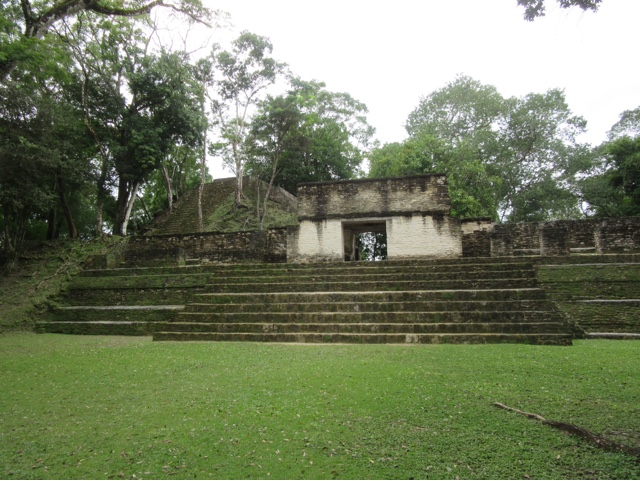 The courtyard of the Royal family- 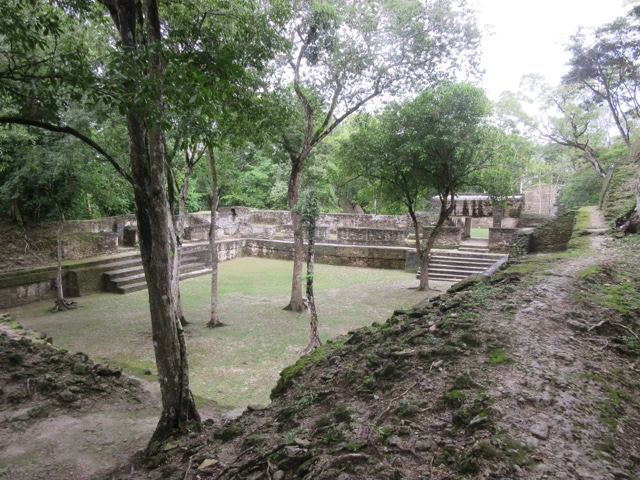 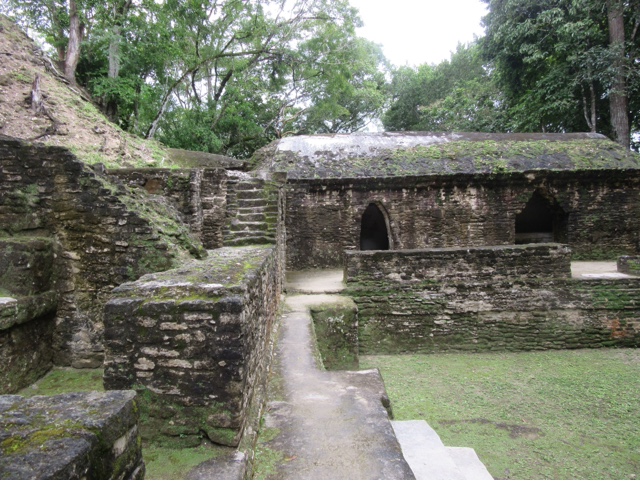 Middle to late period preclassic figurines ( 650 B.C.-250 A.D.) are solid and were likely used in worship- 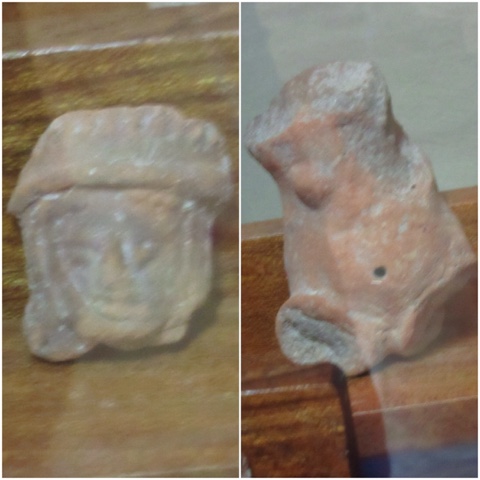 This mask was discovered in a garbage dump near Baking Pot.  It shows a post classic (1200-1500 A.D.) Maya god called Ek Chuah, the patron of merchants and travellers- 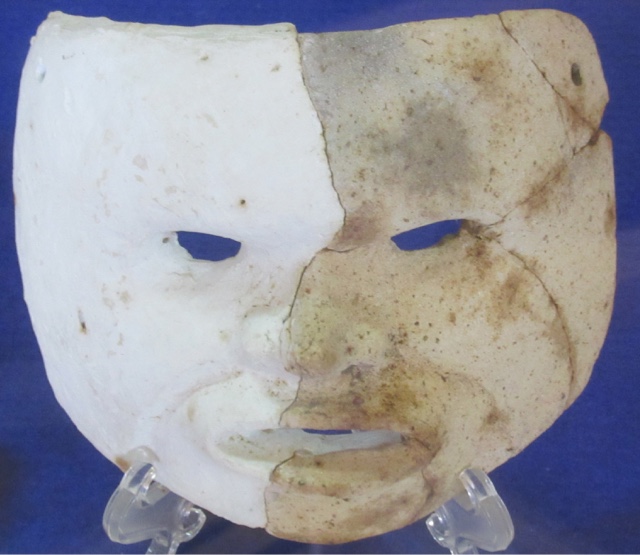 There are 4 periods in Maya history:  Preclassic period (300 B.C. To A.D. 300), the Classic period ( 300 to 900 A.D.) the Postclassic period (A.D. 900 to 1500) and the Colonial Period (1500-1800 A.D.).
During the Classic period, Maya communities continued to grow and prosper.  By 800 A.D., the Maya population was 1 million, more than today!  During the Postclassic period, Maya rulers no longer enjoyed godly stature and power and there are fewer carved monuments.  During the Colonial period, the Spanish had arrived and soon dominated.  Spanish friars went into the interior to convert the Maya to Catholicism.  In 1697, the last Maya settlement, Flores Guatemala, was "conquered" by the friars and foreign diseases had all but wiped out the Maya.
After, I walked to the San Ignacio Resort Hotel to see iguanas at the Green Iguana Conservation Project.  Since Nigel, my guide, first started here 2 years ago, he has released 215, mainly to prevent incest.  Incest bred babies have two tails, a couple heads and are not able to survive.  Today there are 50 iguanas at the project.
This bright green iguana is 8 months old and the same size it was at birth- 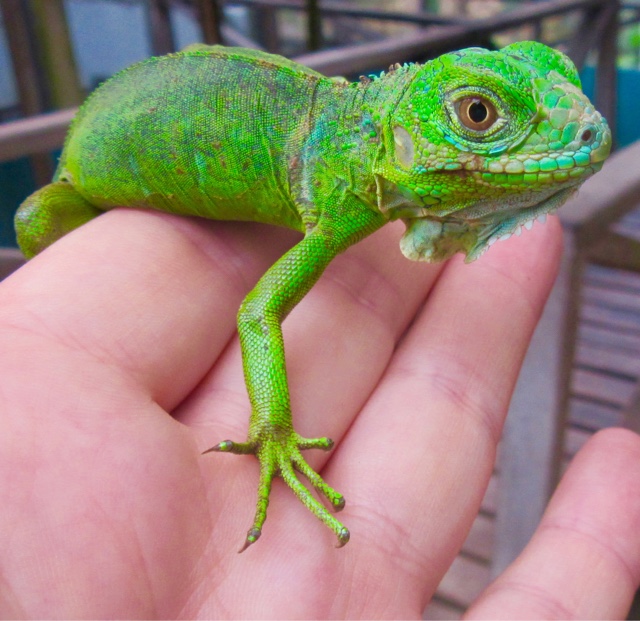 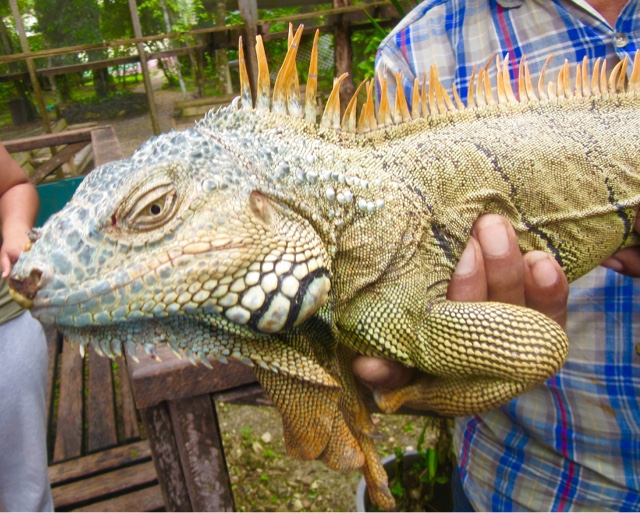 Star Gazer is mentally challenged.  He's 7 years old, has poor balance and is an epileptic-

Did you know...
-  If they lose their tail, through a bite during a fight, it only takes 6-12 months to regenerate, however, it will grow back without stripes.
-  The tail is 60% of their body weight.
-  They use their tails like a propellor for swimming, for defence and for balance.
-  They grow to a length of 6.5 feet.
-  The green iguana dates from 1758.
-  The males have 2 penises!  The females lift either their right or left leg and that determines which penis is used.  Sometimes males mate with 2 females at the same time!
-  They have 3 eyes.  The 2 on the sides see color but the one on the top only sees light, shadows and 18 degrees.  It's good for spotting birds that might be swooping down for supper.
-  Green iguanas are vegetarians and black iguanas are omnivores.
-  Iguanas become sexually mature at 5 years.  Females are pregnant for 2 months with 20-90 eggs.  After 2 months, they put their eggs in holes 6 - 10 feet deep.  It takes another 3 months for them to hatch.  80% will hatch in the wild but only 10% make it to maturity (5 years).  At the project, 80% hatch and 50-60% make it to maturity.
-  Males turn orange during mating and females turn green.  November to February is mating season.
-  Males have harems:  up to 15 females!
-  They shed their skin, piece by piece, every month.
-  They live 25 years in the wild, 35 in captivity.
-  Iguanas are highly threatened because they're eaten as "Bamboo Chicken" or "Chicken of the Trees".
-  Apples give them diahrea and bananas make them sneeze.
-  Iguanas are often killed during their fertility period because the eggs are used as an aphrodisiac. 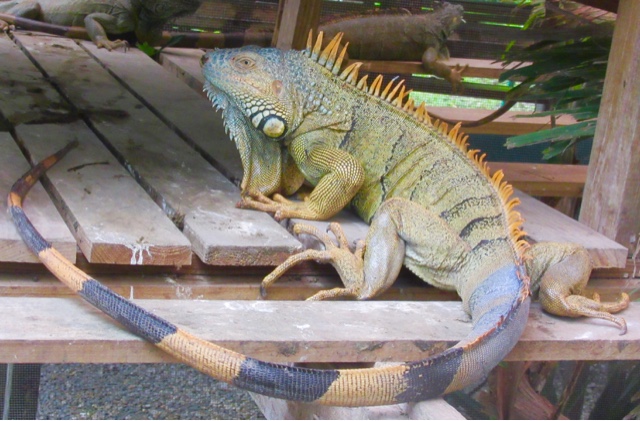 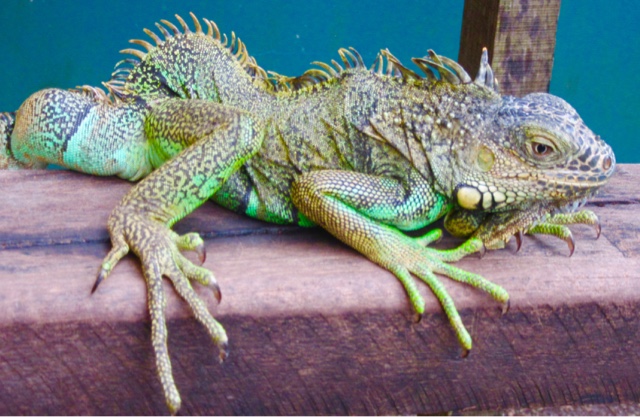 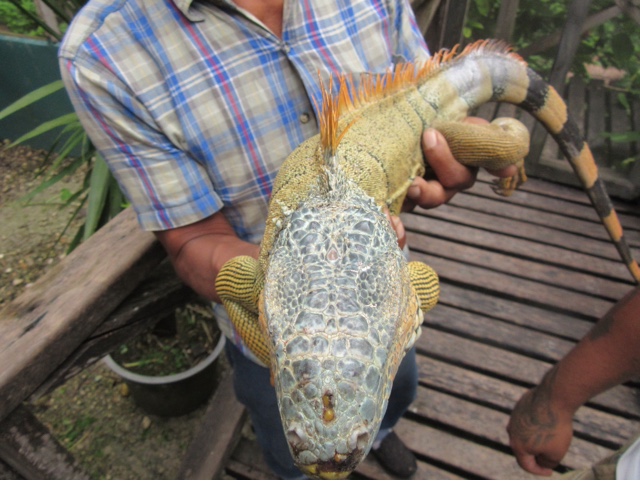 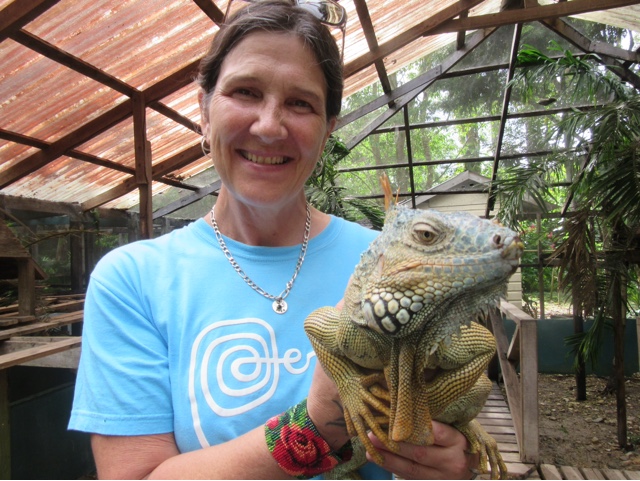 The neck piece, called a dewlap is used by both males and females to sexually attract the other- 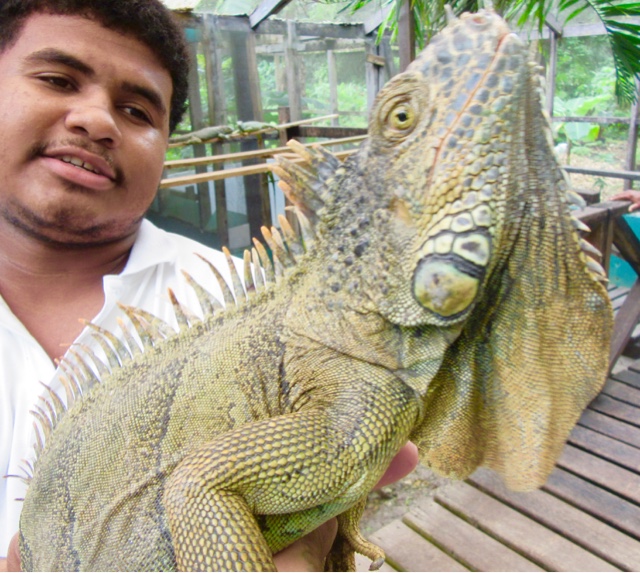 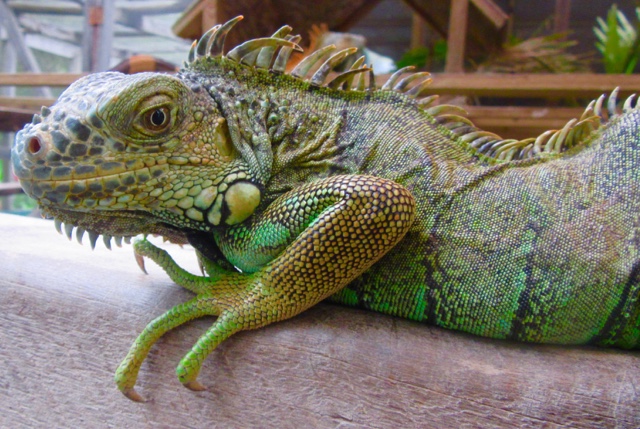 Today was cool, so the iguanas were not eating.  They are cold to touch and hold but as we held them and they heated up, they suddenly had the desire to eat- 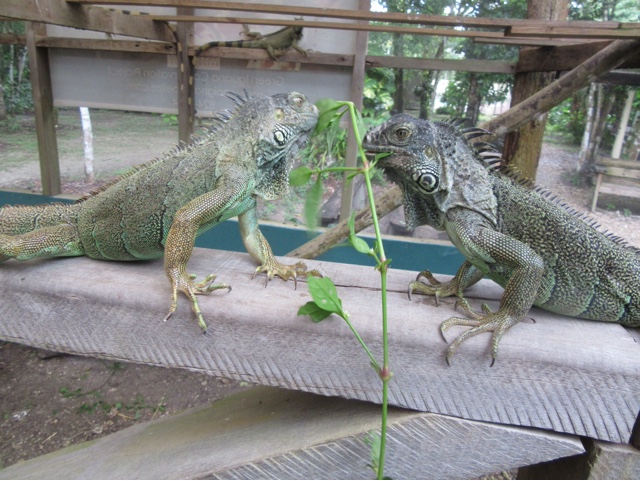 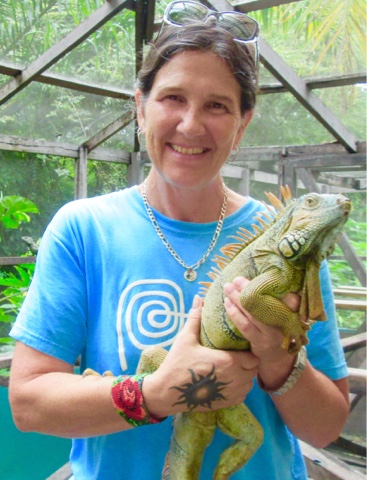 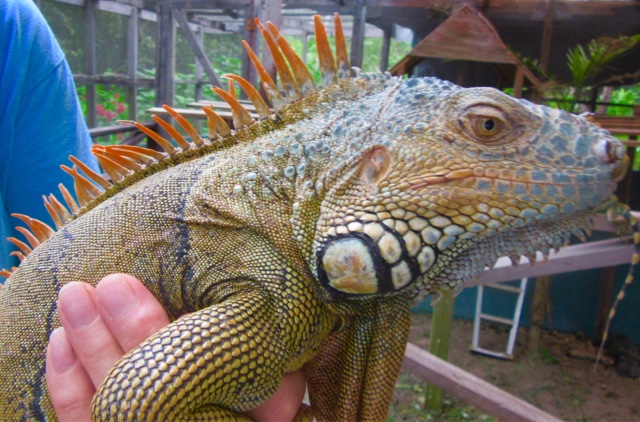 I had a great day and was super enthralled with the iguanas!  Not sure what I'll do tomorrow, maybe nothing!
at January 15, 2017