Today was fantastic!
I lucked out because I booked a 'dorm' room, which means me and who knows how many others sharing, usually a pretty small space with the bathroom somewhere else, and in this case outside.  Well the toilet and shower are both in very small rooms but the sink is literally outside.  My concern is that I will get stuck on a top bunk and I have to get up at least once during the night and crawl down a rickety or metal ladder that feels like it's cutting through the soles of my feet, only to stumble around in the dark, unlock the door, find the bathroom and then do it all again in reverse.  This place, Viñas, has met people like me because there were only 3 beds in the room and all were one level.  Perfect I thought!  And to make it even better, I was alone all night!  So, I paid dorm prices for a private!
I woke up early so went walking through the empty streets of  Lanquin.  The church needs some renovating- 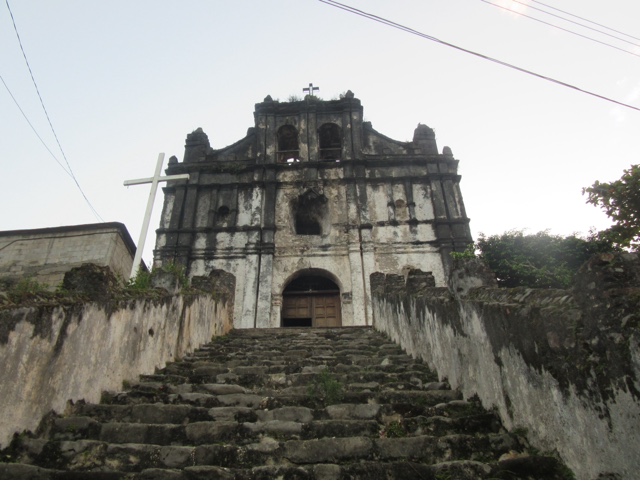 As always, the faithful were praying- 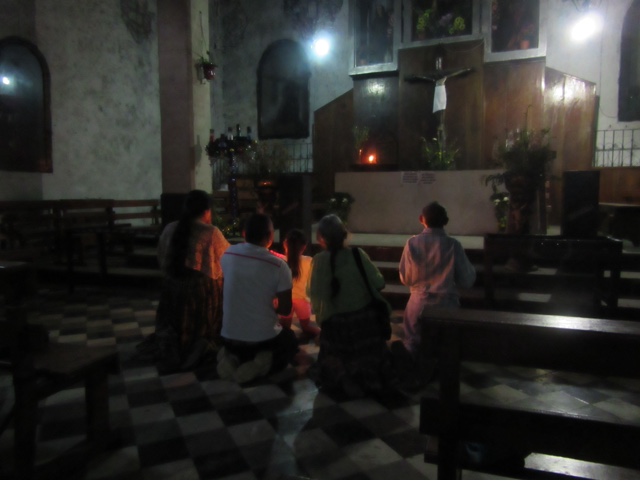 I signed up for a tour to Semuc Champey which is 9 km, or 1 hour away.  We rode in an open truck similar to this one- 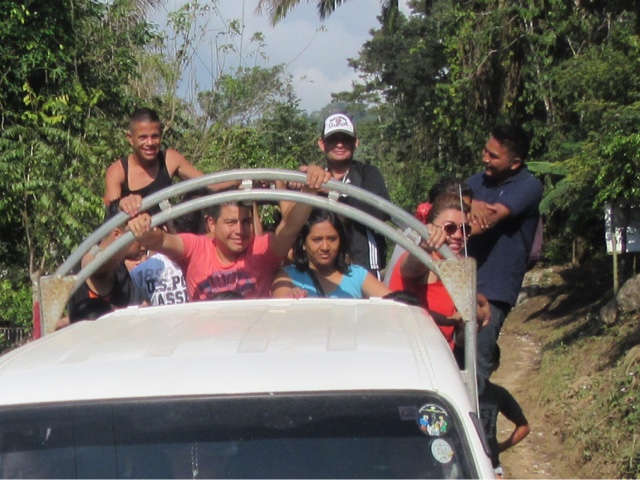 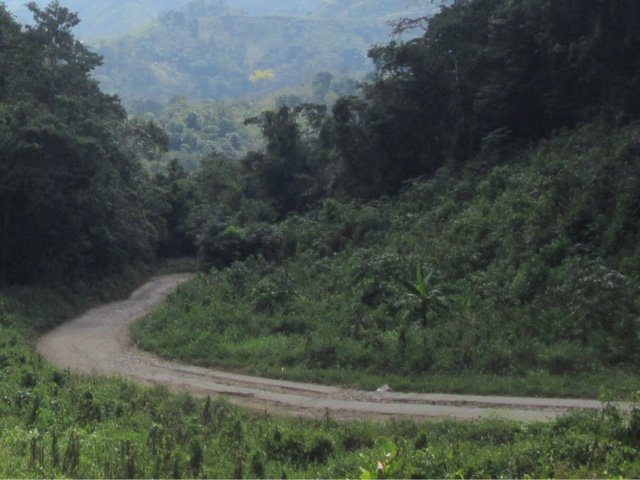 There are cement paths for the tires on the really rough spots!  There's only room for one vehicle so someone has to pull over, stop and wait.  I feel like what I think a slave might have felt like riding in the back of a pickup going to work.  You have to hang on for dear life but it is a great way to see the country side and the air is warm so that makes it quite pleasant.
This road was in the process of being graded.  I didn't think that word was in the Guatemalan vocabulary, especially after yesterday's trip- 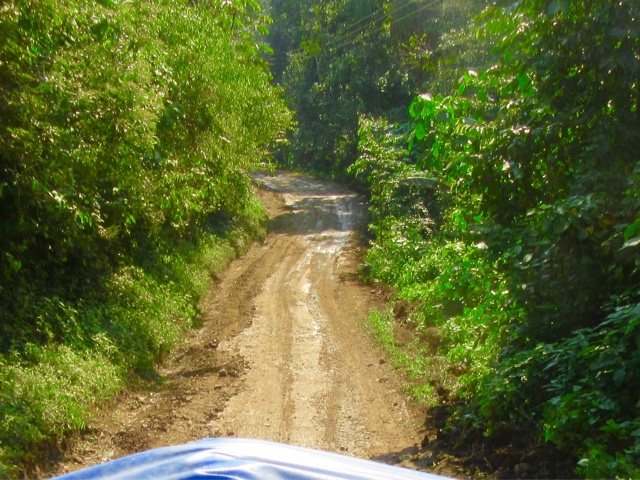 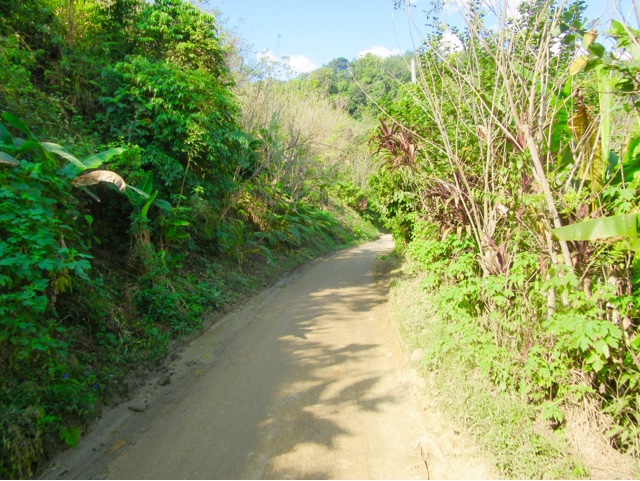 Finally the river came into view- 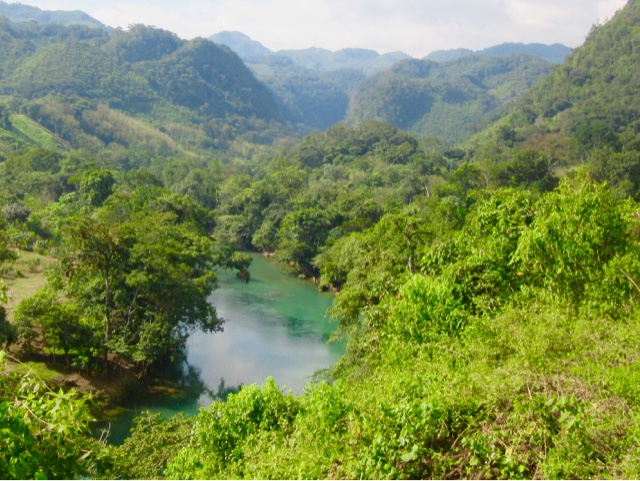 Once at Semuc Champey, the first part of the tour was up to the Mirador which is the lookout.  It took about an hour to go up on stairs- 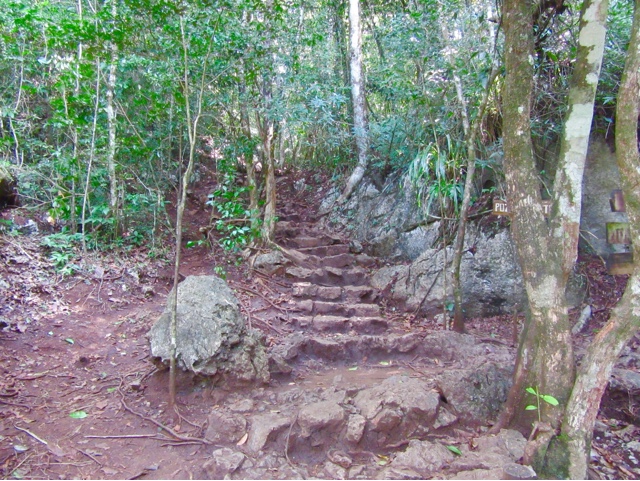 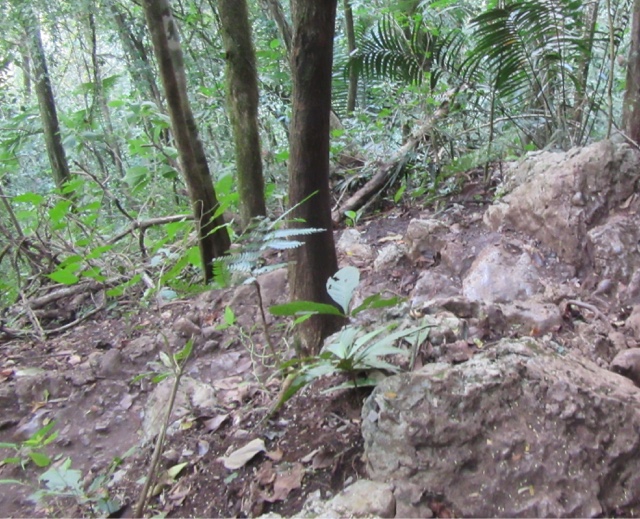 The view was fabulous- 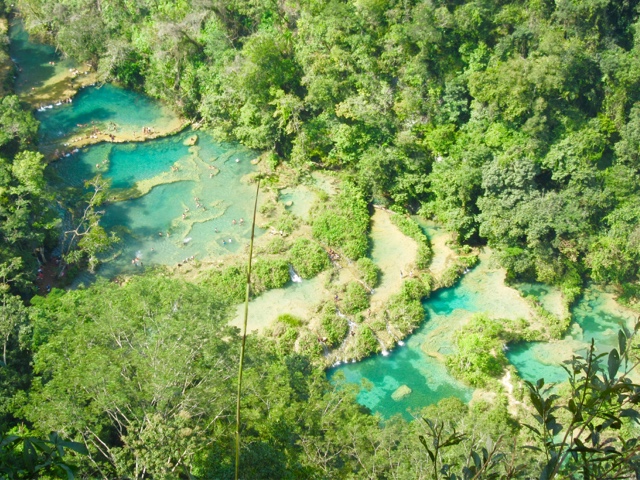 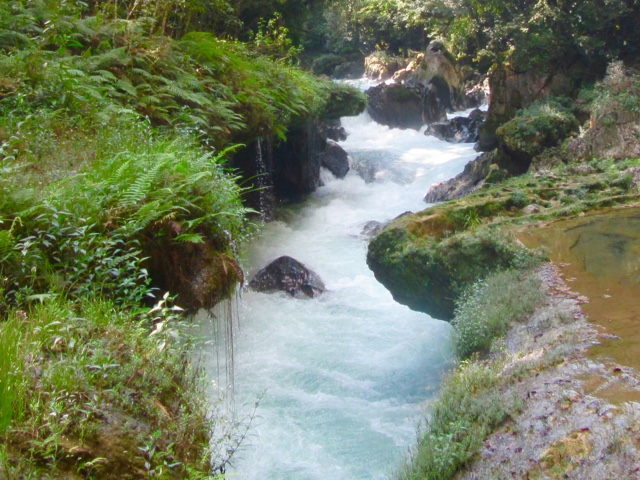 But most goes underneath the limestone and away, however, some goes on top, forming beautiful pools- 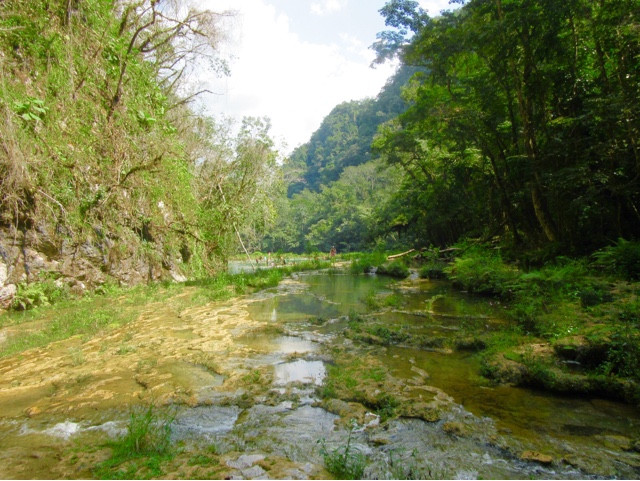 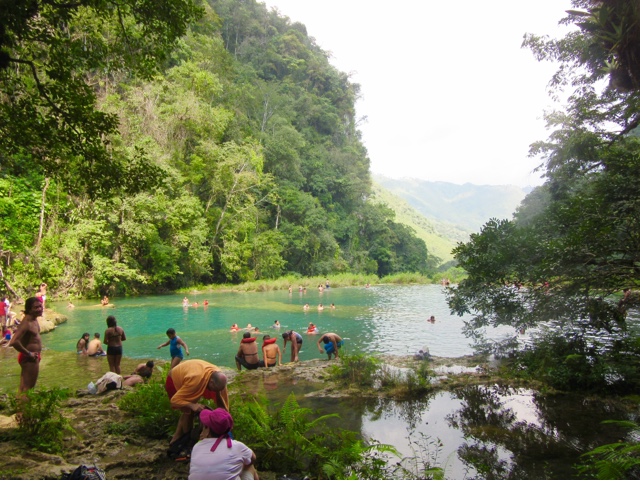 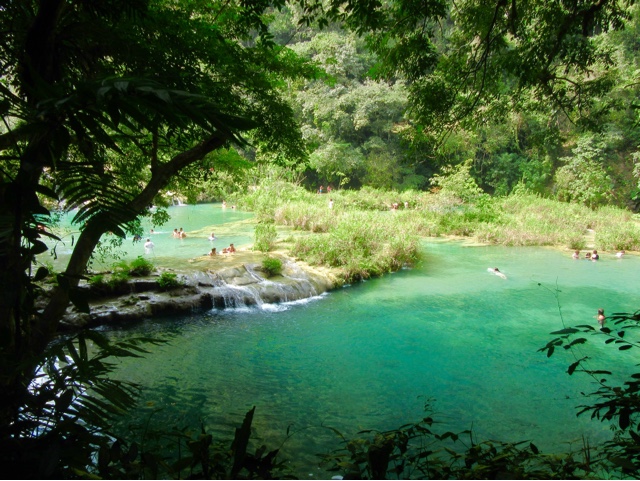 You can jump from pool to pool, slide down natural 'rock slides' or just take your time walking down.  The water is very clear and clean and fairly warm.
After lunch, we went on a cave tour.  It wasn't claustrophobic at all and everyone had a candle.  That was the biggest challenge - trying to keep the candles lit.  There are ropes everywhere to hang onto and anytime we had to go up, there were metal ladders with good hand holds.  There is an optional jump - some said it was 2 or 3 meters high and then to exit, I went through a shoot in a waterfall.  It wasn't a very long fall, maybe 2 meters and then I popped up with the water pouring on my head.  The stalagmites are really interesting - all kinds of textures: elephant skin, very porous, striped, columned, you name a texture and it was there.  Of course there are no environmental rules so not only can you touch whatever you want, the smoke from the many candles has put black soot on everything.  It was pretty crowded because there was more than just our group there but that made for slow, more careful walking.  There are large rocks here and there but generally the bottom felt sandy.  I was very glad to have worn my runners.
After the cave tour, we went tubing down the river- 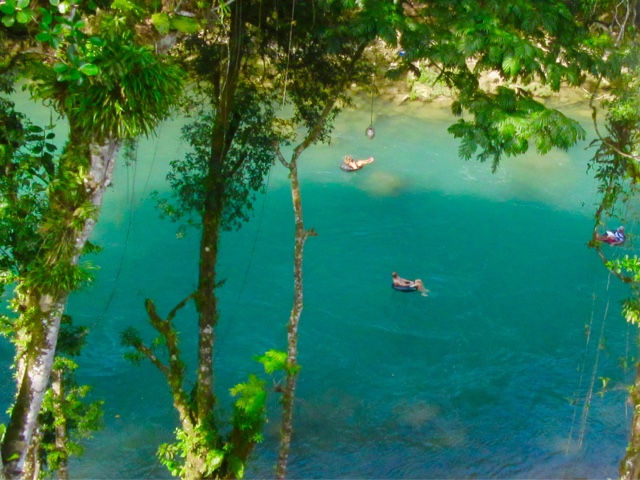 By this time it had clouded over and was later in the afternoon so believe it or not, it was chilly!
After another hour ride in the back of the truck, I made it home and had a great visit in the restaurant over supper and piña coladas.  Tomorrow I'm off to Flores for 5 nights!  Looking forward to that but not the 10 hour van ride!
at January 07, 2017