It was an early start to get to the airport by 4 am!  I'm not sure I really had to be there that early but my flight left at 6:15 and I always hear horror stories of how people weren't there 2 or 3 or 1 or however many hours ahead of time and they were denied boarding.  I was lucky because A Jay flew back to Saskatoon at 7 am so Orville and Michèle drove us to Managua.  The 40 minute flight to San Salvador with Avianca Air was great in a spacious and new plane.
Before Christmas, when I was in León, I visited León Viejo and saw Volcán Momotombo from the lookout.  Here is another great view from above- 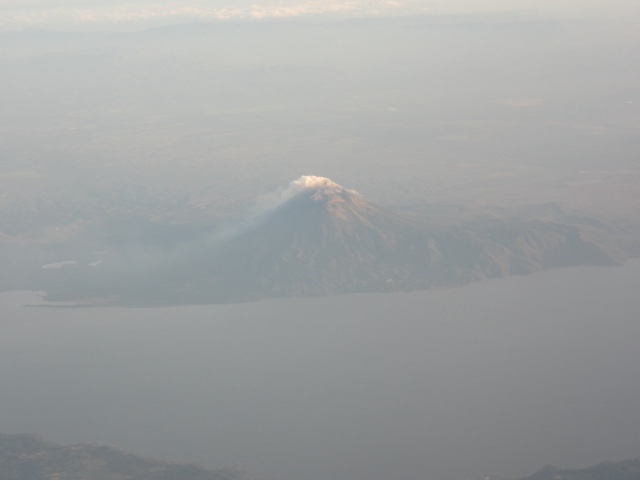 San Salvador to Guatemala Ciudad is even shorter at only 30 minutes.  After a screw up with the hotel and a cab, I eventually got to Hotel Ajau, checked in and went looking for the bus depot because tomorrow at 5:30 am, I leave for Rio Dulce.  I wanted to be able to walk rather than rely on a cab so early in the morning so the Fuentes Norte terminal is a short one and a half blocks from here.  Having tomorrow figured out, I started walking.  Guatemala Ciudad is a colonial city, founded by Carlos III of Spain in 1776 as the capital because Antigua Guatemala had been destroyed by earthquakes three years earlier.  However, Guate was also greatly destroyed in 1917-1918 and again in 1976 but has since been just about completely restored.
Starting at Parque Central is Palacio National, built after the 1917 earthquake.  It contains the police headquarters, chamber of deputies and a cultural center.  Unfortunately it was closed because of the holiday-

Beside it is the cathedral and that's all it's called - the cathedral.  Construction was started in 1782 and finished in 1815.  Unfortunately it was closed too- 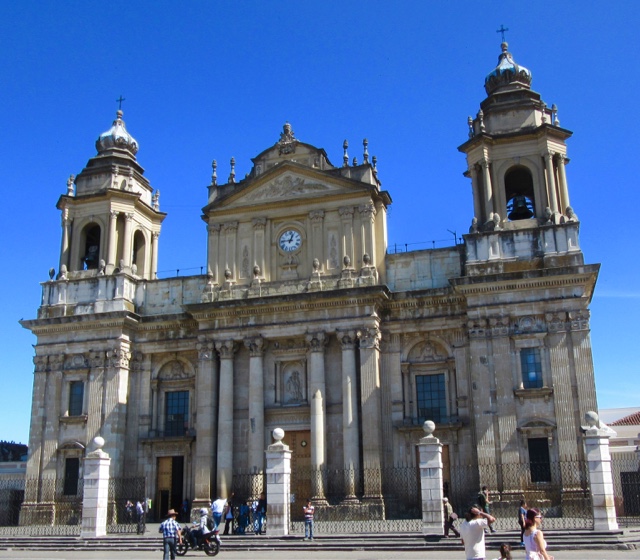 Walking along, I came to the Arco de la 12 Calle which is really the post office, built in 1949- 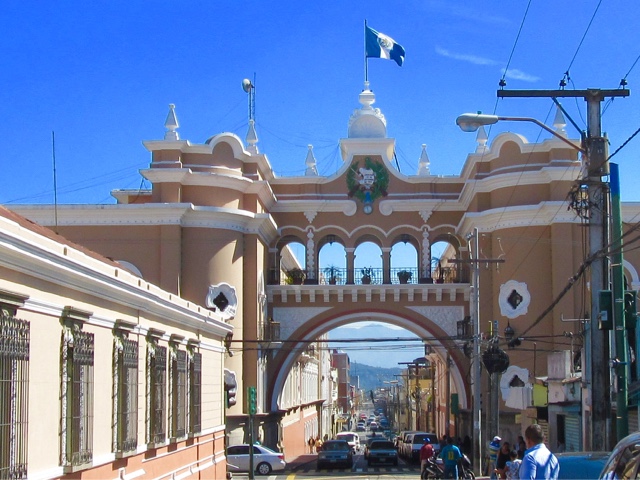 Close by, La Merced, in neoclassical style, was dedicated in 1813.  Lots of the rich interior was moved from Antigua Guatemala.  Unfortunately, it too was closed- 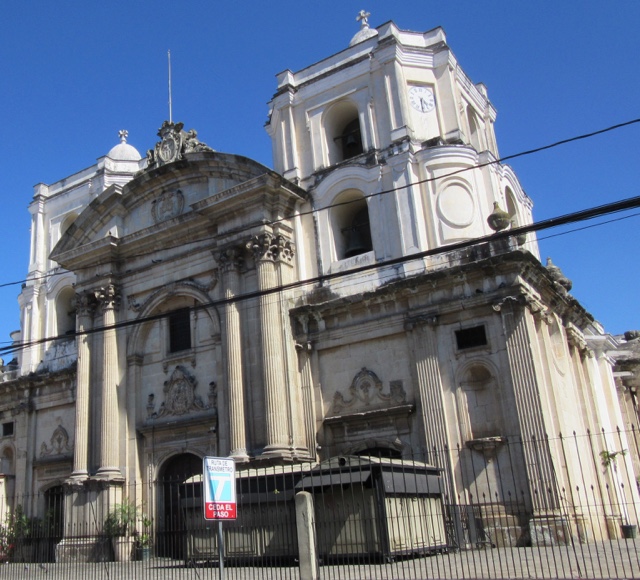 The back cupola is yellow- 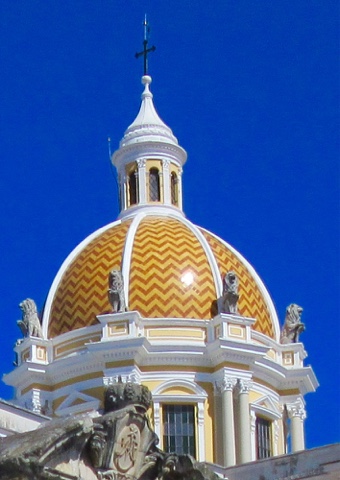 Bombas and piñatas are still for sale and you can buy a 'full meal deal'.  This one includes 2 regular piñatas, 1000 candies, 100 chiclets, 24 bags to put the candy in once the piñata is smashed, 24 little games, probably to also fall out, 60 lollipops, 1 stick to beat the piñata and 1 major jackpot prize, all for a mere $49! 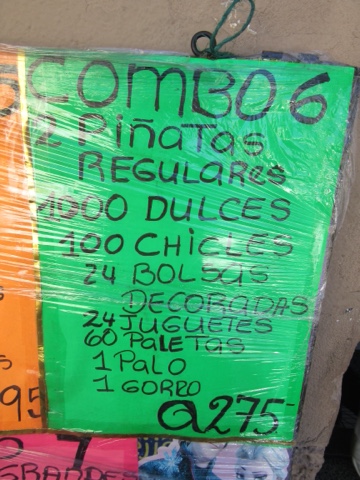 There were some huge piñatas for sale but this had to be my favorite! 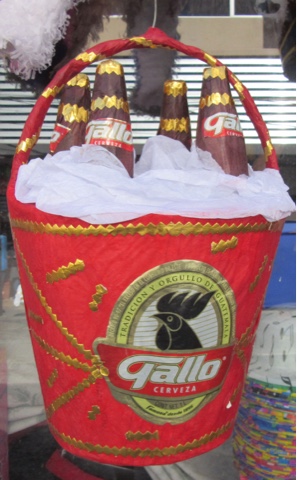 Walking around the market there were some funny t-shirts- 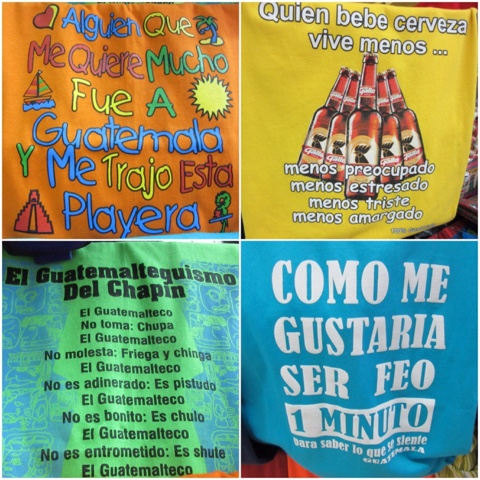 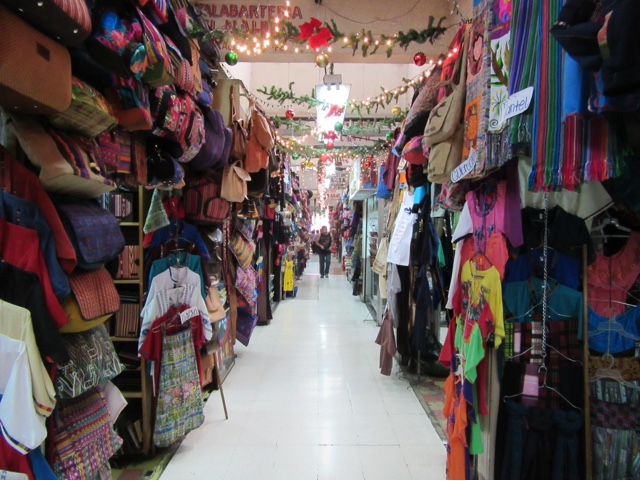 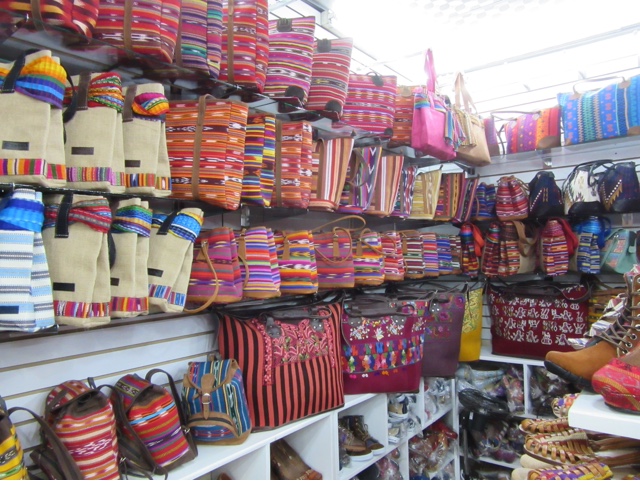 Guate is a rough city and I'm told not to go out walking at night.  There is a huge police presence on the busy streets and I'm not sure if that's a good thing or not.  There is a lot of graffiti too which always says 'rubby' to me- 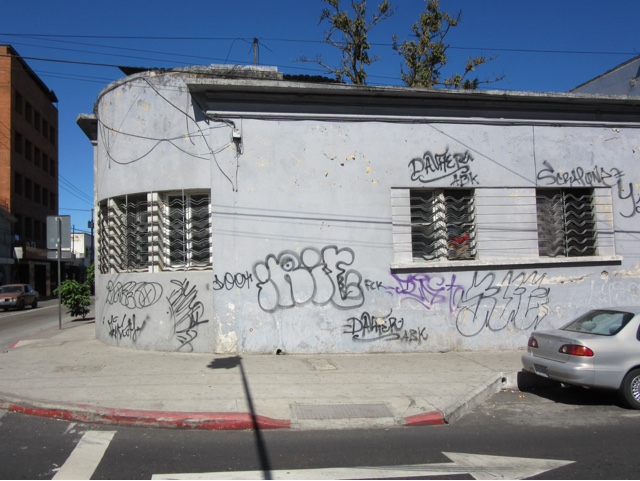 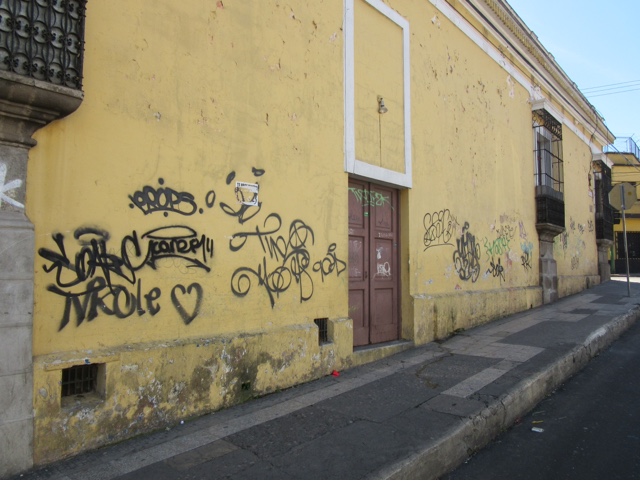 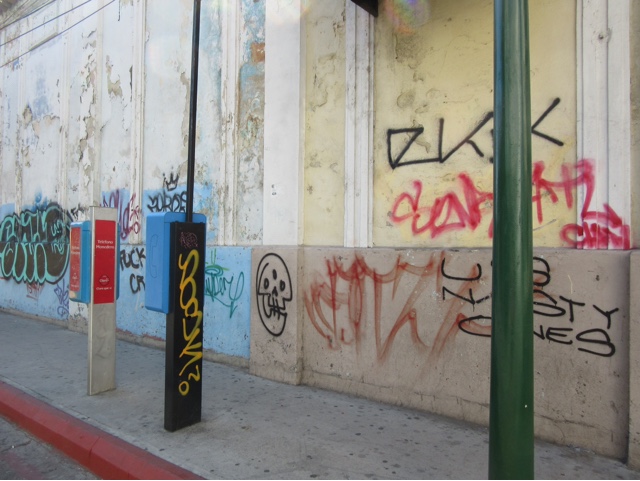 These crazies were playing this large xylophone and the woman and another were dancing, sort of shuffling and singing, sort of squeaking and groaning.  Quite a crowd gathered to watch- 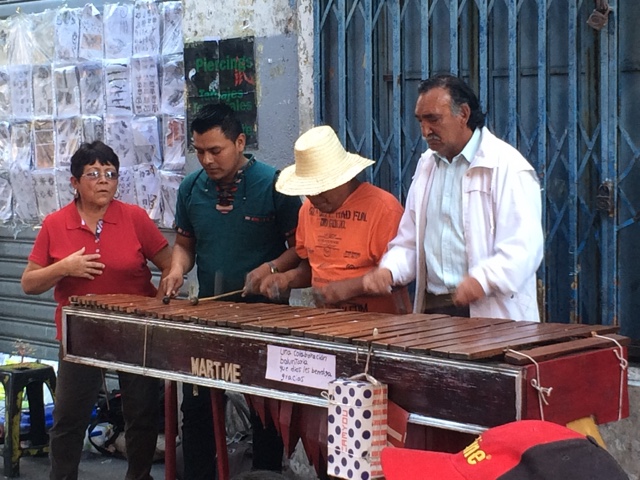 Back to the churches.....
Iglesia Santa Clara- 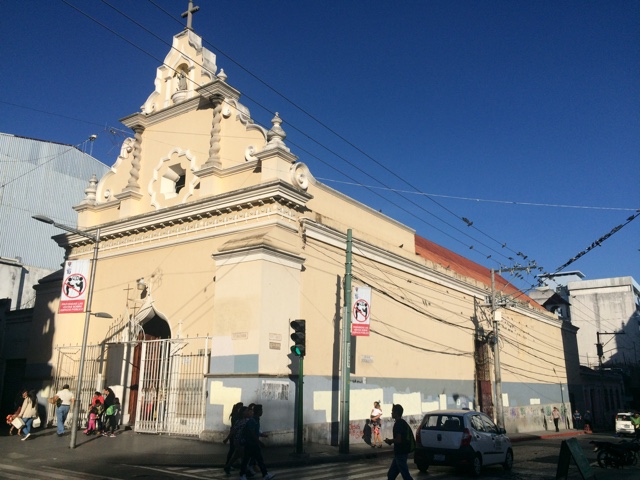 The inside was simple but with Navidad colors- 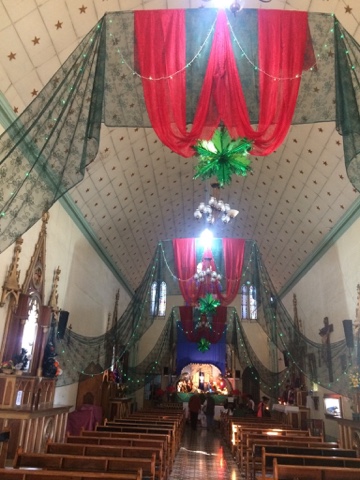 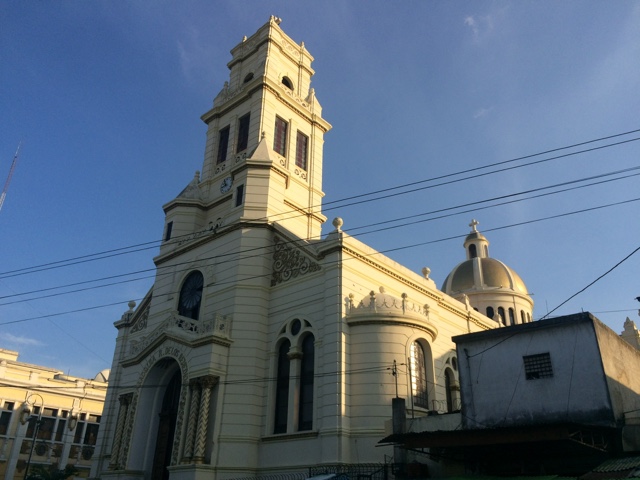 The draping curtains are interesting.  I think this is their version of red and green for Navidad- 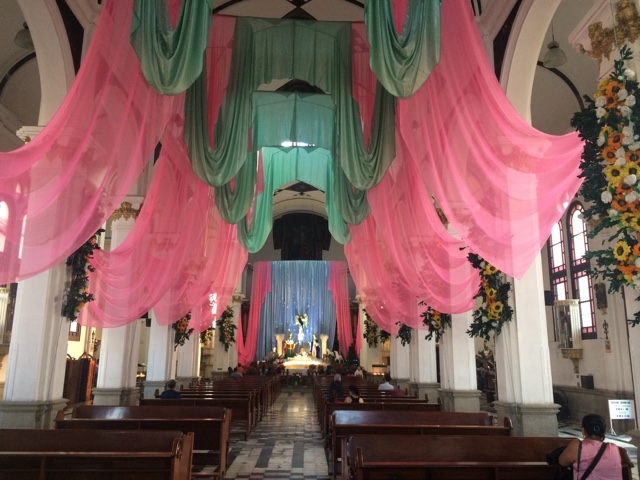 The whole front was a nativity scene- 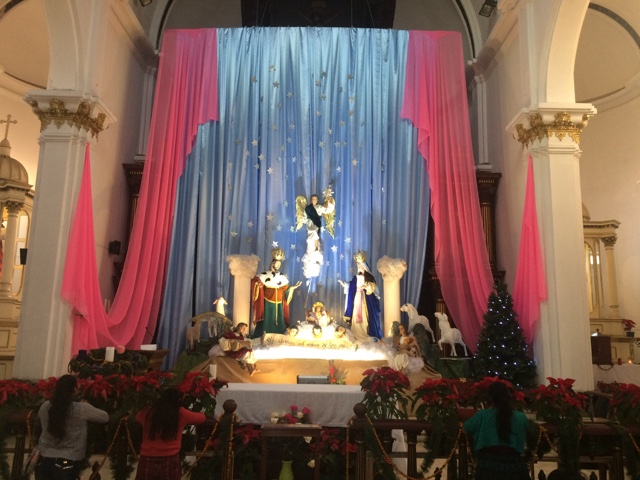 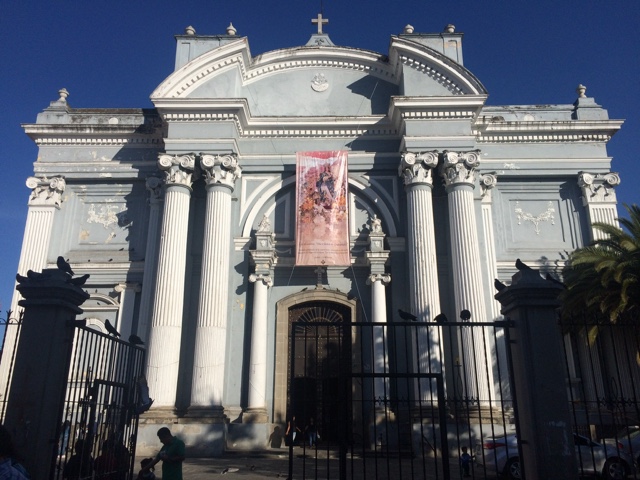 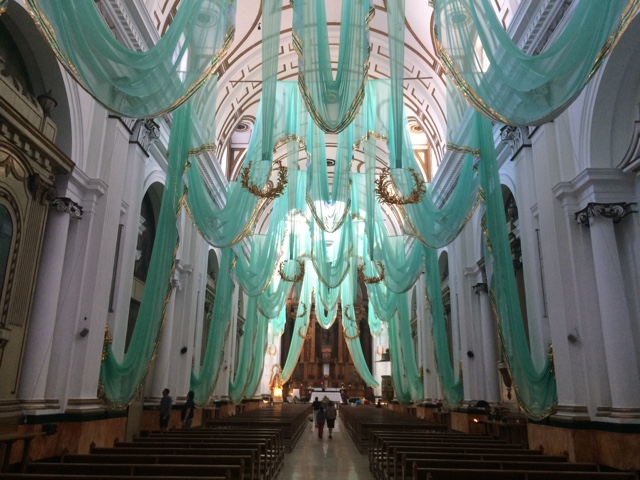 The front was all wood- 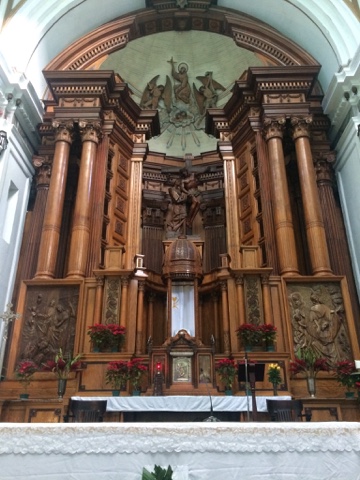 After all of these churches in just one day, I'm going bananas!  Ha!  Today was the first time I've seen the red ones- 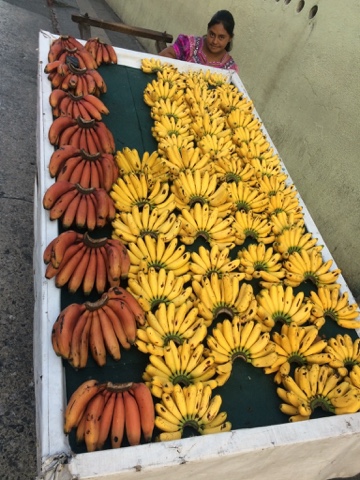 Today was a good Spanish speaking day.  I don't want to lose what I've learned so I try to strike up conversations with randoms!  Sometimes they speak slowly and correct me and sometimes they talk a hundred miles an hour.  I don't talk to those ones for long!
Tomorrow I have to be at the bus station at 5 am as I head towards Rio Dulce so it's going to be an early night tonight!  I may not have internet for the next 5 days because I'm going to some remote areas so if you don't hear from me for a while, don't panic!  I'm enjoying nature!
at January 02, 2017