Matt, Will and I rented electric scooters to see the temples and pagodas.  They were perfect
to manoeuvre in the sand, mud, gravel and on the pavement.  It was a great way to travel around Bagan! 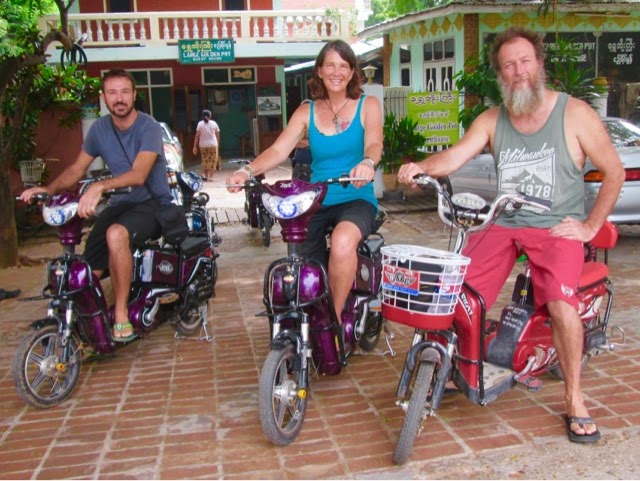 This is the Bagan Golf Course.  I wasn't able to play but it looked pretty nice. 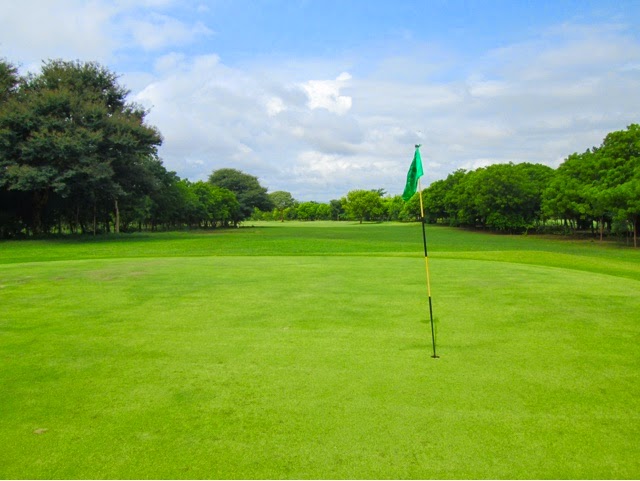 The Bagan Archaeological Zone is 26 square miles and home to the densest and largest concentration of Buddhist temples, pagodas, ruins and stupas in the world.  The construction and shape of each temple is important in Buddhism.

Our first stop was Gu Byauk Gyi, built in the 13 century AD. 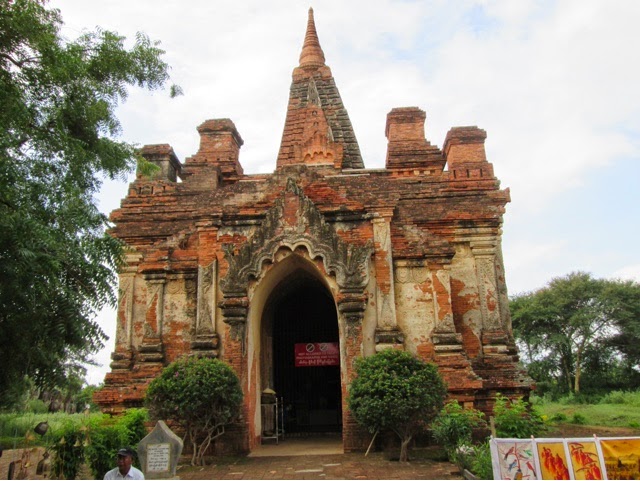 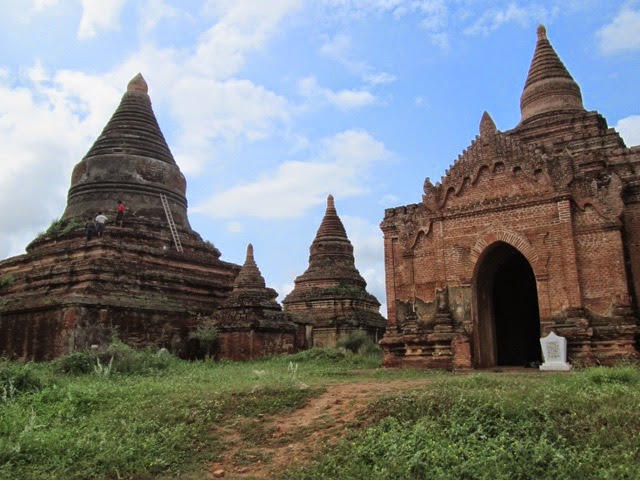 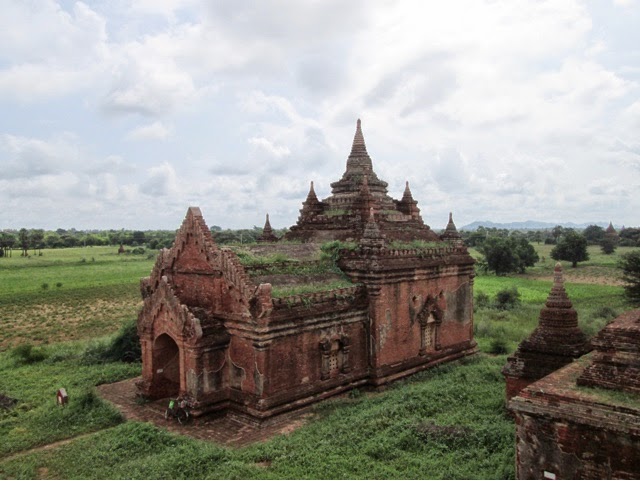 Htilo Minlo Temple was built in 1211 during the reign of King Htilominio.  It's 3 stories tall or 46 metres.  Inside, there are four Buddhas that face each cardinal direction- 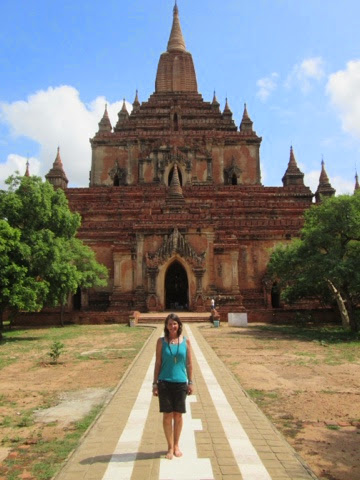 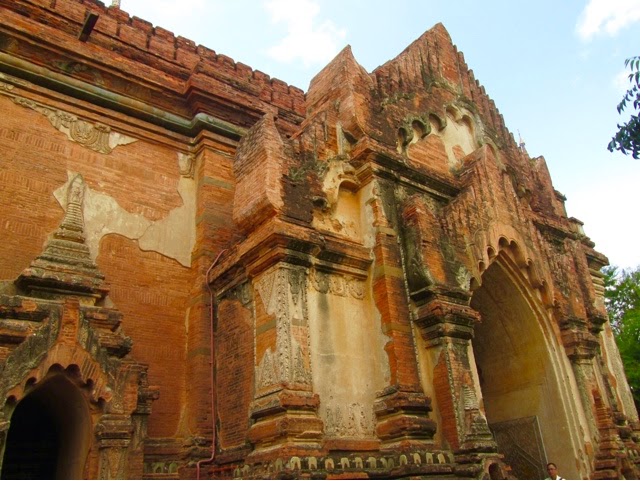 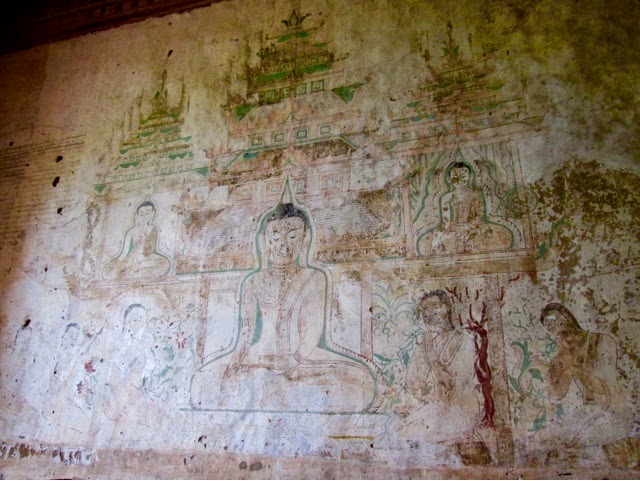 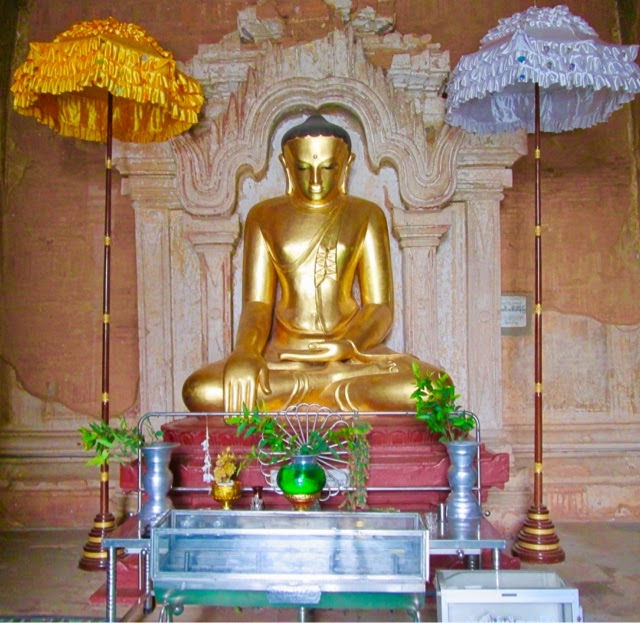 Dhamma Yan Gyi was commissioned by King Narathu who killed his father, brother and wife so he could be king!  It's unfinished because he died 2 years into construction.  There are about 6 million bricks in this temple- 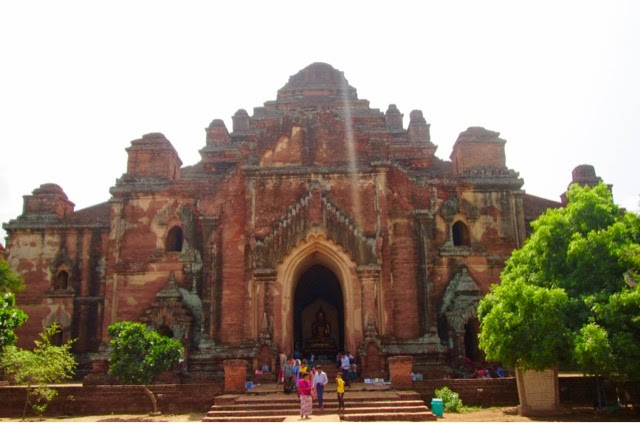 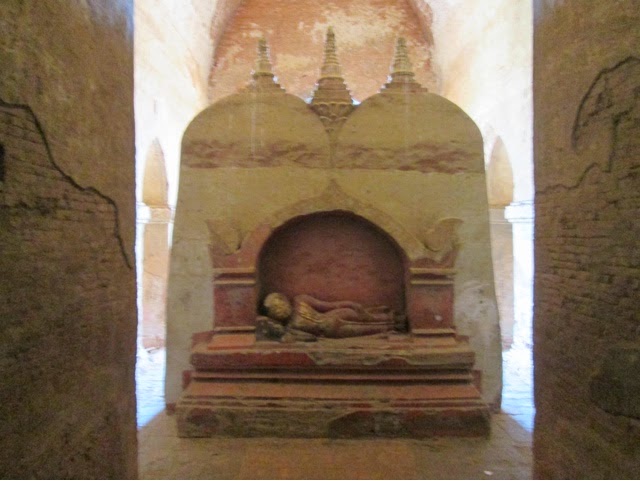 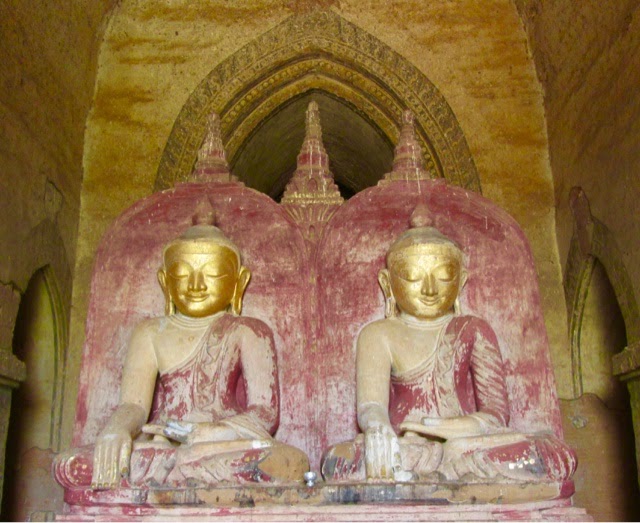 The tradition of marionettes began in the 11th century and continued until at least the 15th.  The kings prohibited human dancers on stage so the puppet industry thrived.  Today, certain wood must be used and the same colorings, strings, designs and patterns are adhered to.  Stories told during a puppet show include those of Buddha's previous births, Burmese sagas and historical events. 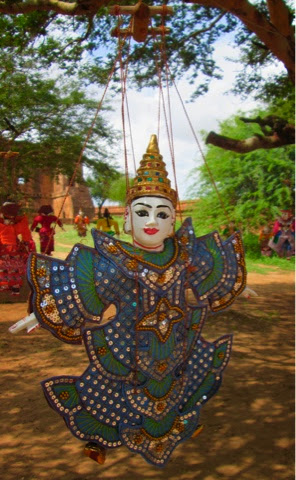 Ananda (Boundless Wisdom) Temple was built by King Kyan Zit Tha of the Pagan Dynasty in 1105 and is the most important in Bagan.  It is one of four surviving temples here.  The 170 foot high corncob at the top is called a hti.  The temple is said to be an architectural wonder because it combines Mon and Indian styles of architecture.  It's also been called the Westminster Abbey of Burma. Inside, there are many niches and each contains a statue of Buddha- 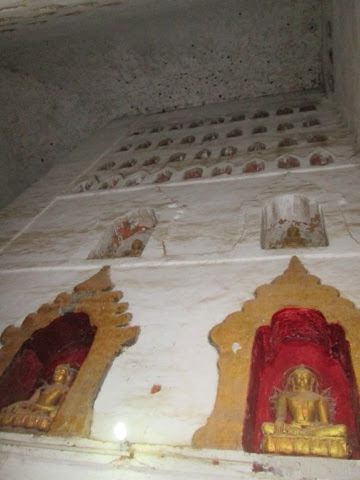 Once again, there are four, 31 foot tall standing Buddhas facing east, west, north and south which represent the 4 Buddhas who have reached Nirvana. 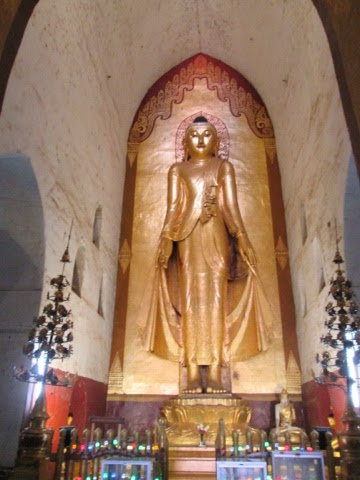 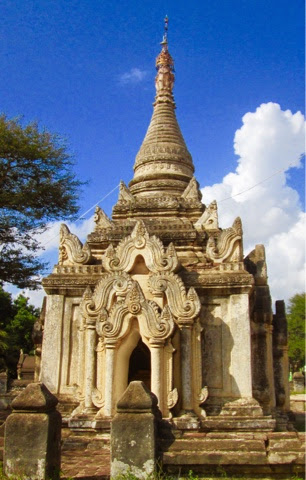 They are just everywhere!

Shwe Zi Gon Pagoda was constructed during the reign of King Anawrahta and finished in 1102 AD during the Pagan Dynasty.  Supposedly, a bone and tooth belonging to Gautama Buddha are housed here. The pagoda is a circular gold leaf gilded stupa surrounded by smaller shrines and temples.
It's huge and very beautiful- 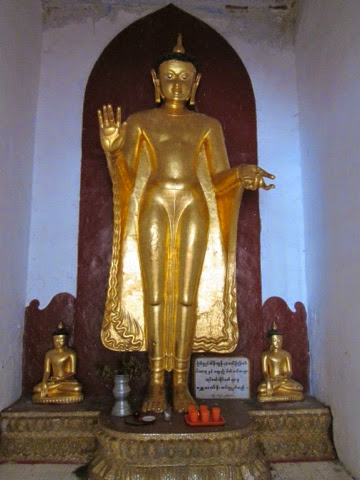 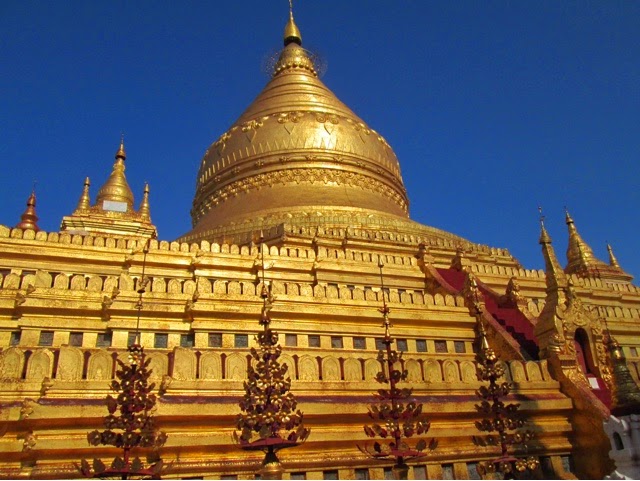 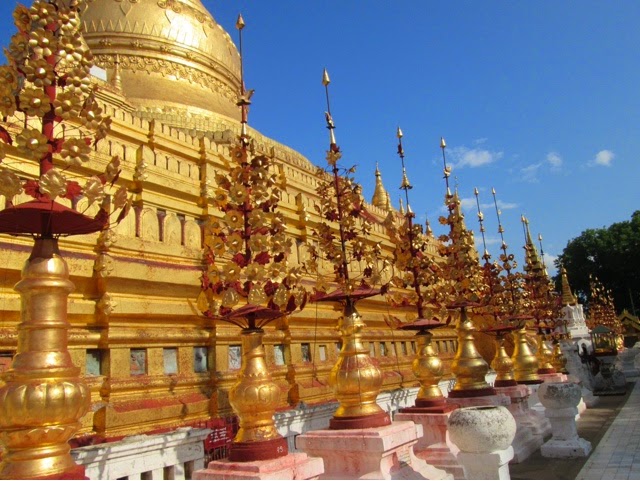 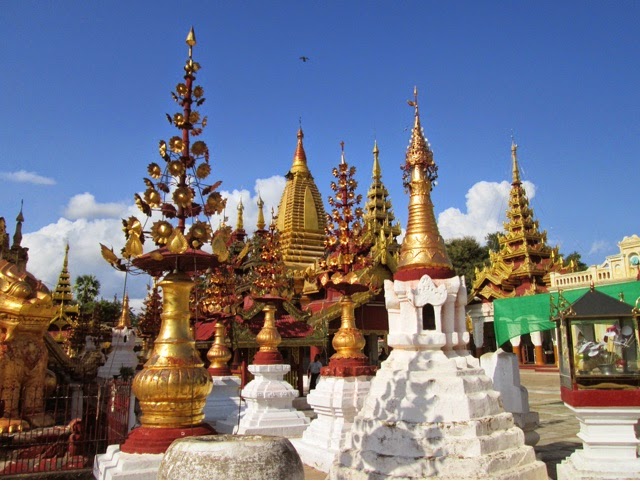 We've seen quite a few billboards for this product.  It's cream that whitens the skin.  White's where it's at....  I guess??

Bagan is amazing and one of the most beautiful and mysterious places I've ever been!  It is so hard to imagine life during the temple building period.  Why so many?  What were they thinking?

Tomorrow we have an early start to Inle Lake!  Looking forward to it!