Yangon is a nice city but there are no motorcycles!  That is strange for Myanmar.  Apparently a government official was in an accident with or because of one so they are banned.  It must make it difficult for the locals because they are a cheap and efficient way to get around, however, there are many inexpensive taxis so it's very easy to get around.  There are still some colonial buildings from the time of the British occupation and the streets are very wide.  There are also many green spaces.  Drivers are very patient, in spite of the constant traffic jams - very few horns honking.  The most annoying thing are the mega speakers attached to power poles, sides of buildings and sometimes mounted on tops of cars, blasting out music or propaganda.

Lunch was a delicious chicken biryani.  The spices are so good! 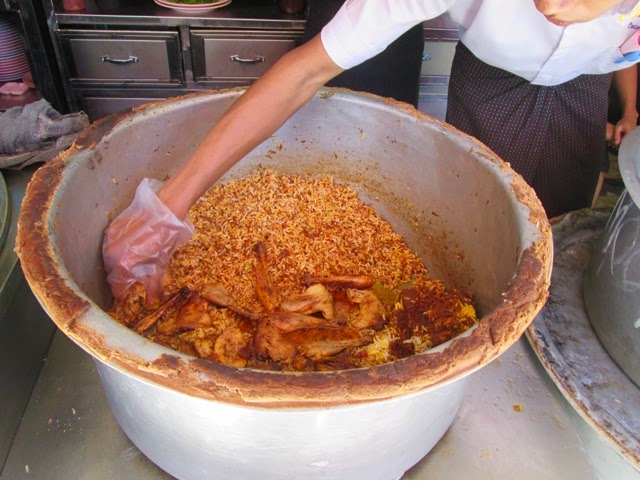 This is the Shwedagon Paya. 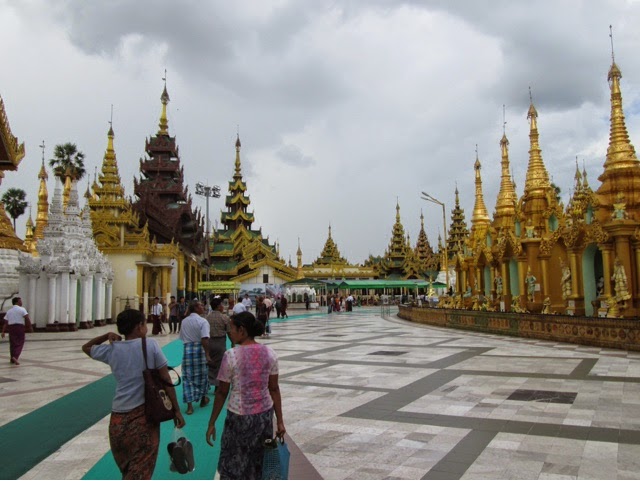 Its dome measures 322 feet high and the current stupa, also known as a zedi, was built in 1769.  The platform covers 12 acres and there are 68 smaller stupas - 4 at the cardinal points, 4 more at the corners, and 60 forming 'walls'. 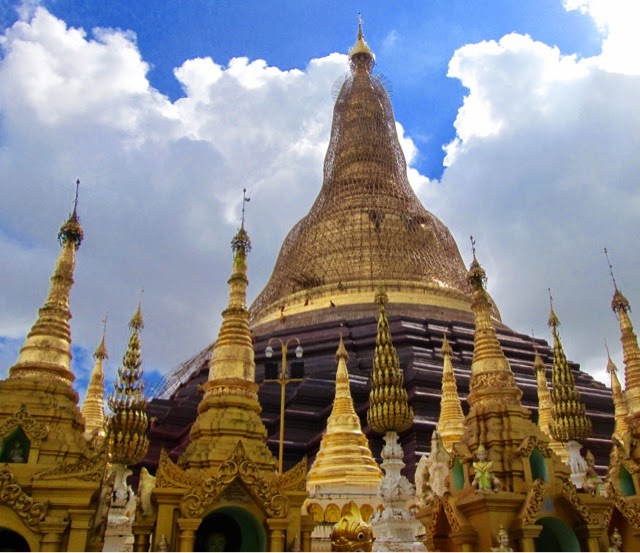 There are 16 flowers on the bell and an inverted bowl on top, as well as lotus petals, a banana bud and finally the hti.  There are 13,153 one foot square gold plates - gold plates, not gold leaf, on the banana bud.  On the top vane, there are 278 carats of diamonds and 1383 other stones.  On the top orb, there are 1860 carats of diamonds and on the very top, one single 76 carat diamond.  Unfortunately the stupa was covered in scaffolding so I couldn't see all the gems.

There are four worship spots like this at the cardinal points.  There are flashing lights around Buddha which made it look sort of tacky- 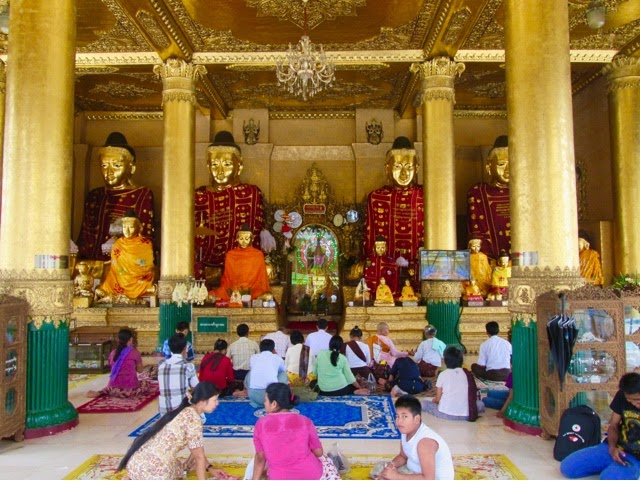 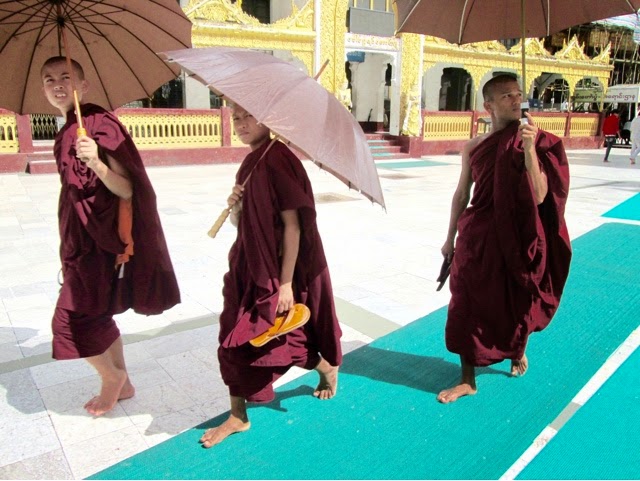 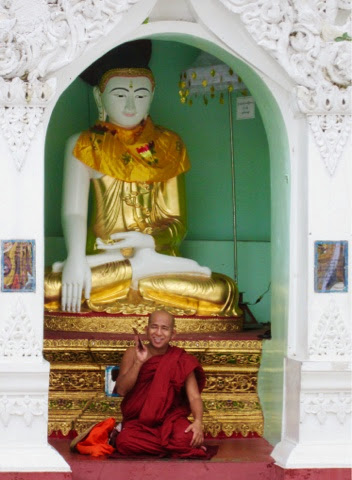 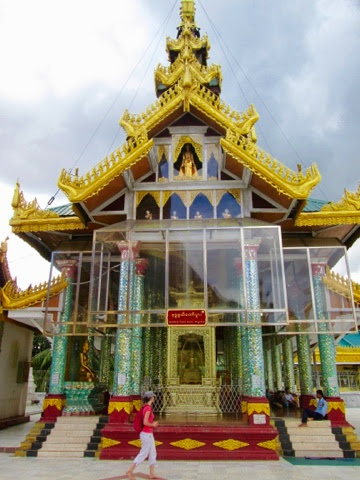 More Buddhas and other statues- 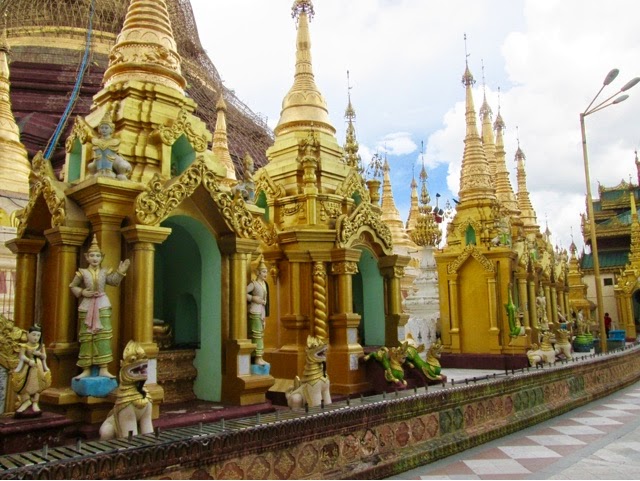 Sein Ma Pu prayer Hall was originally built in 1894 and renovated in 2011.  They were chanting, singing and praying- 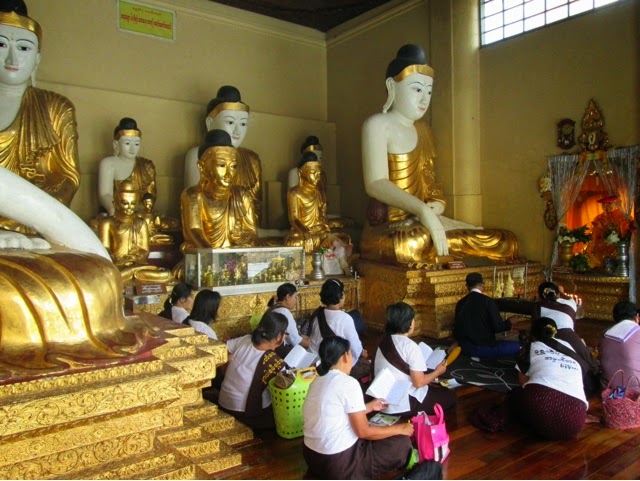 Because I was born on a Tuesday, if I were a Buddhist, I would come to pray at the Tuesday Corner.  Notice the rented longyi - shorts are not allowed- 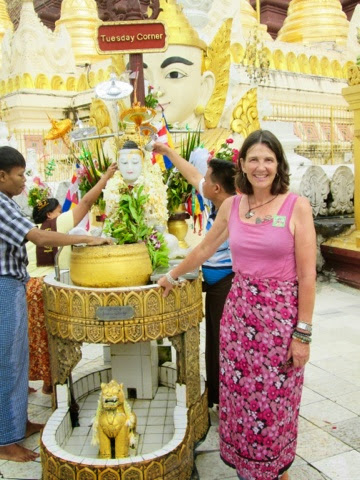 Tonight it's back to the 50th Street Bar and Grill to watch football, well not real football, it's actually soccer.  I'm only going for the bourbon and burger although the chicken wings, calamari and green papaya salad were also delicious! 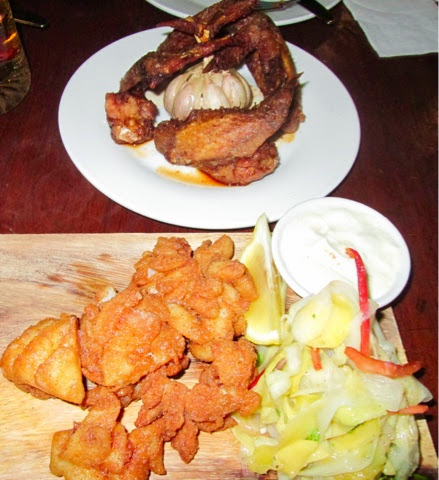