I hired an Uber to the bus station and went to the first counter I saw and was on a bus to Delicias in thirty minutes.  The terminal appears to be brand new.  It’s gigantic, just like an airplane terminal.  Today, December 12  is the Day of the Virgin of Guadalupe.  It’s a popular Catholic feast that celebrates the belief that a man encountered the Virgin Mary, Mexico’s patron saint, in Mexico City on December 9 and 12, 1531.  And if you believe that.....

In the bus depot, a Mariachi band was playing- 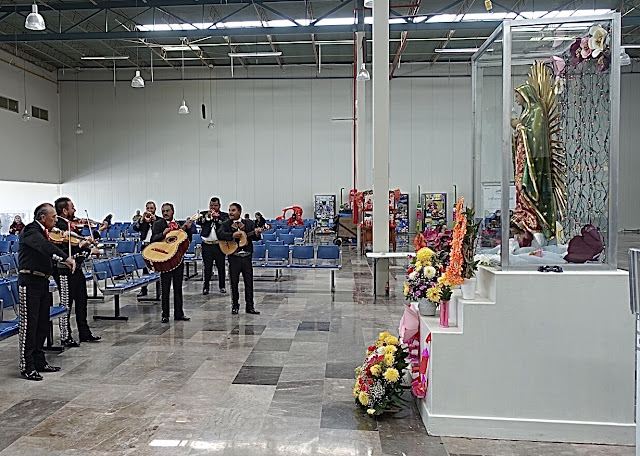 in front of the Guadalupe monument.  The music was awesome- 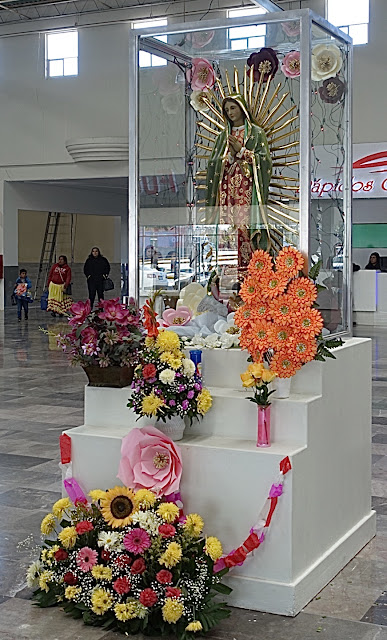 Along the way, it’s the same desert landscape I’ve seen for awhile- 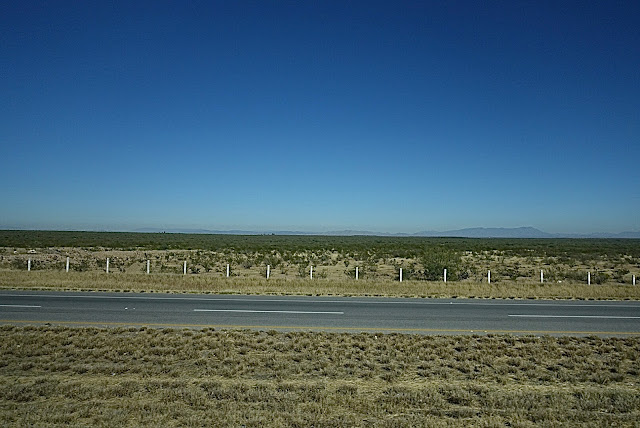 I was in Delicias in an hour but had to go to a different bus station for my evening trip.  Omnibus was celebrating Guadeloupe too- 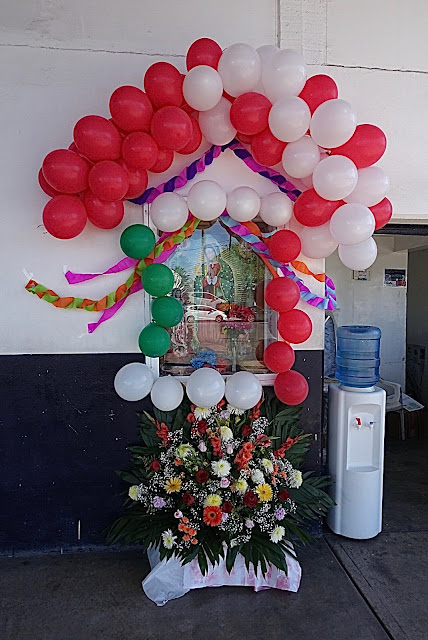 Delicias is a typical city and I originally booked some time here because of the Museo de Paleontologia but after visiting the Museo de Mamuth yesterday, it wasn’t really necessary.  There are a few good things though including an enormous ammonite from 135,000,000 years ago- 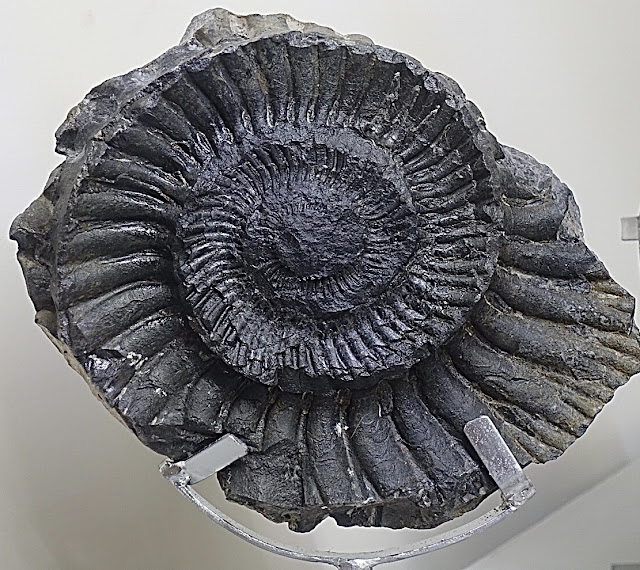 Amethyst is formed by the accumulation of gas during a volcanic event.  Water is also involved-

The head and interior mandible of a Chasmosaurus- 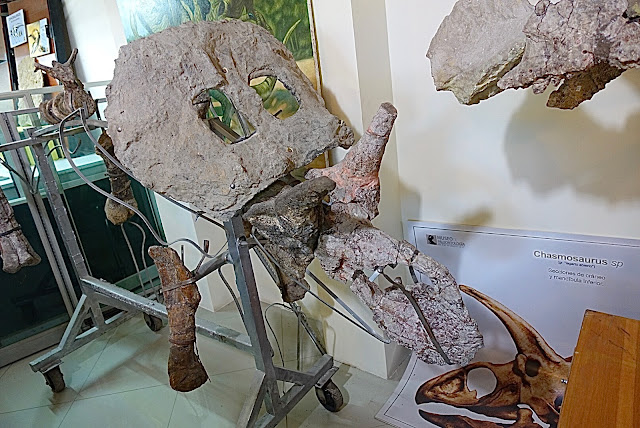 And a skeleton/fossil from a Coelophisis, a carnivore during the Triassic Period 196,000,000 years ago-

This femur is huge compared to my cell phone. It’s from an Alamosaurio, from the Cretaceous period 73,000,000 years ago- 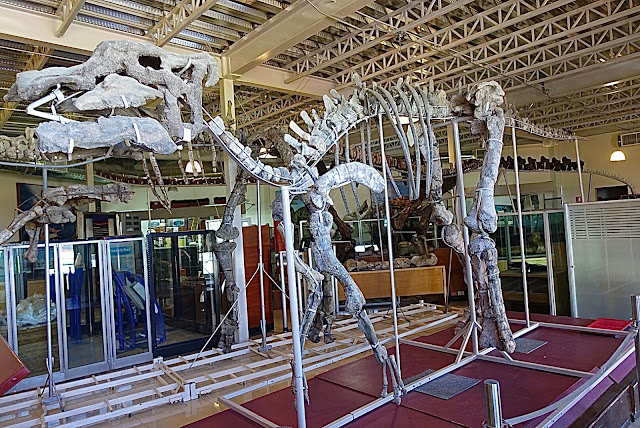 A great display of amonites- 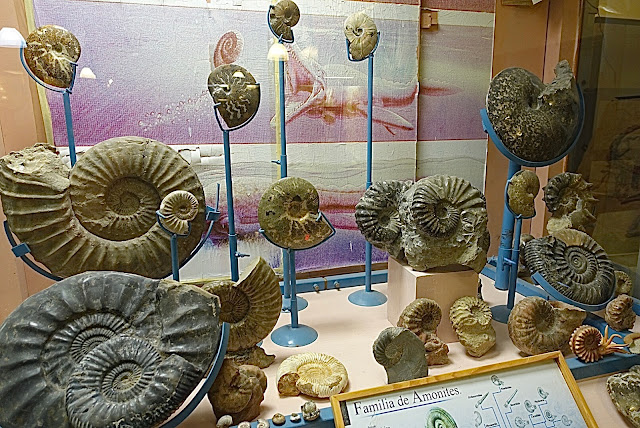 Selenite is also known as satin spar, desert rose or gypsum flower.  It’s made from mineral gypsum and was able to form because of stable conditions for a long time- 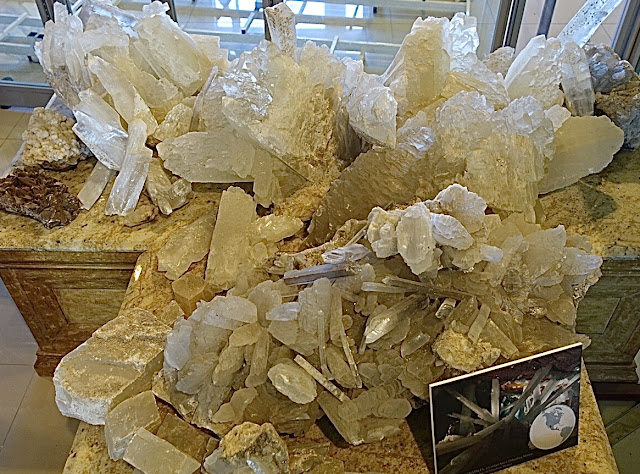 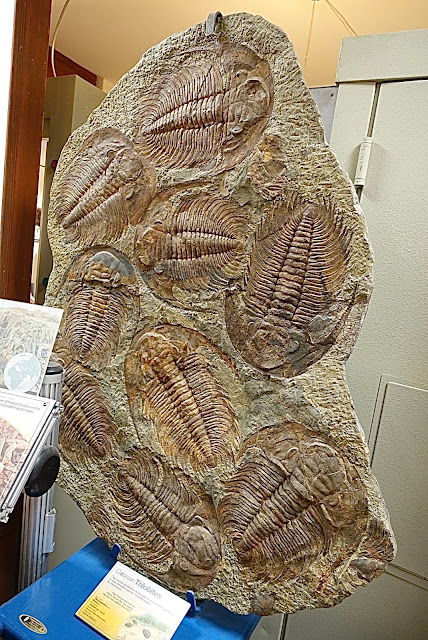 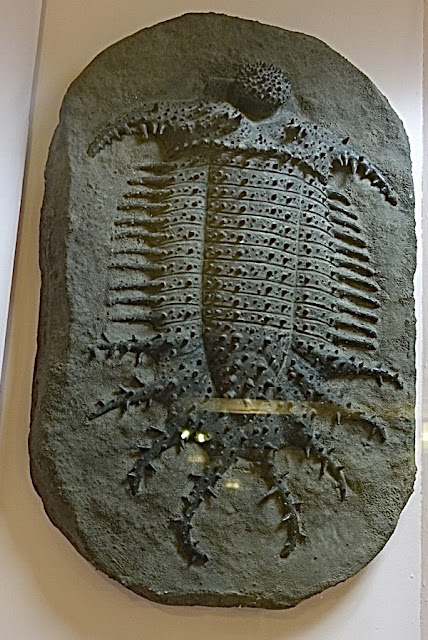 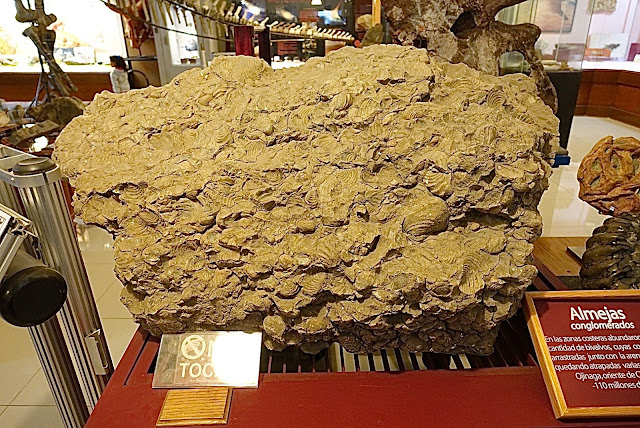 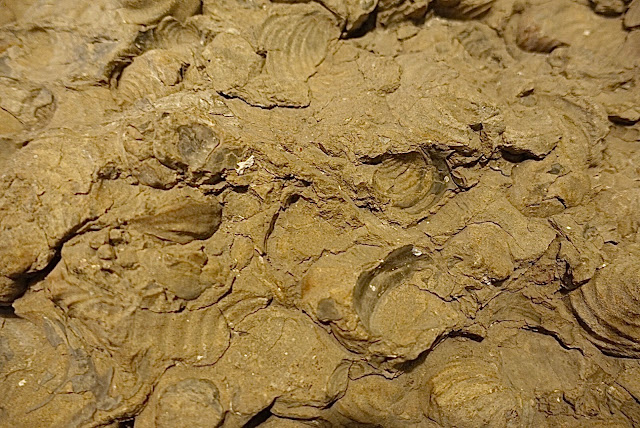 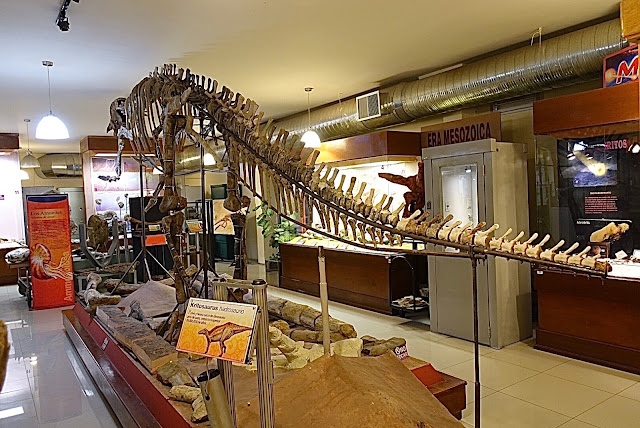 Mummies found in the fetal position from 450 y.a.- 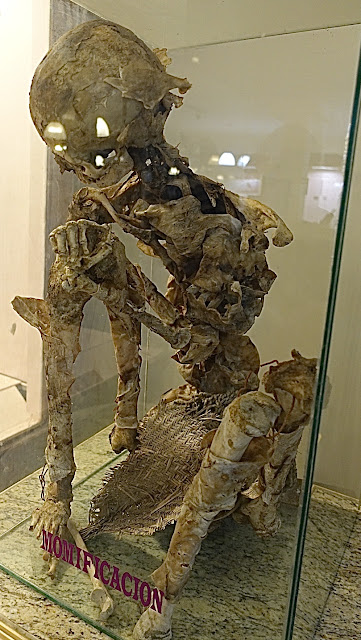 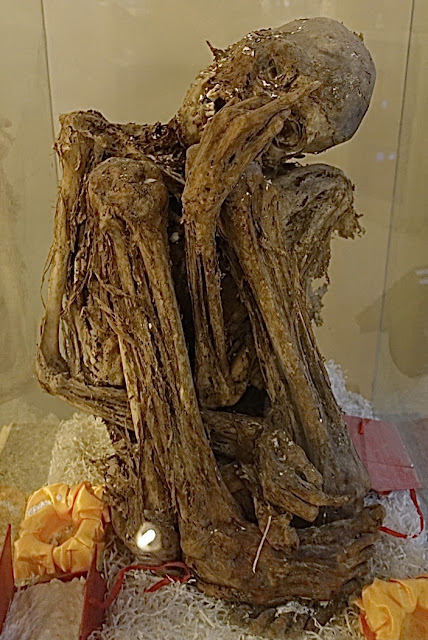 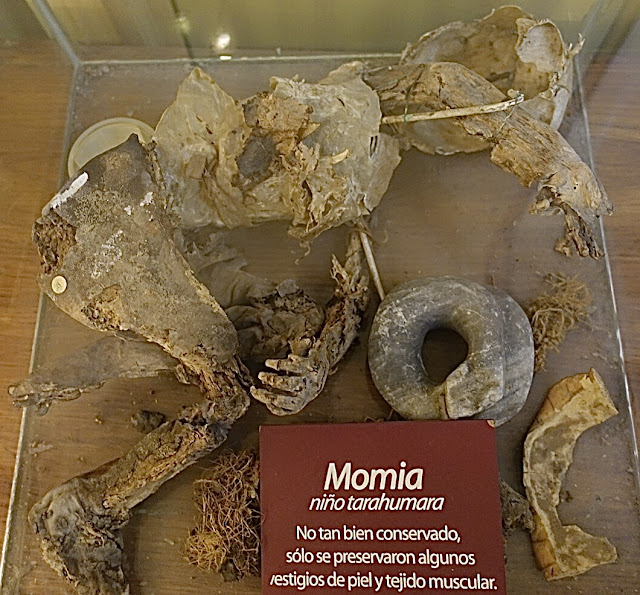 I had a couple of gorditas for lunch - pollo en crema and spicy hamburger.  Lily’s Gorditas is the number one restaurant in Delicias and I know why- 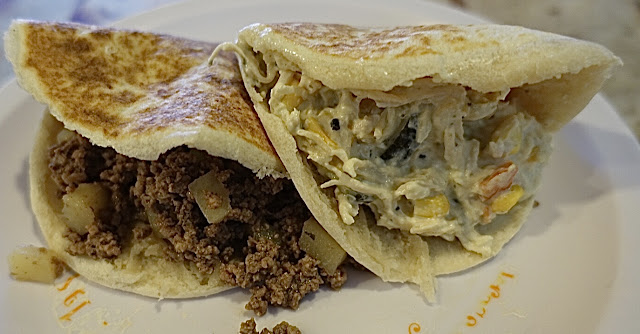 Of course no town in Mexico is complete without a sign- 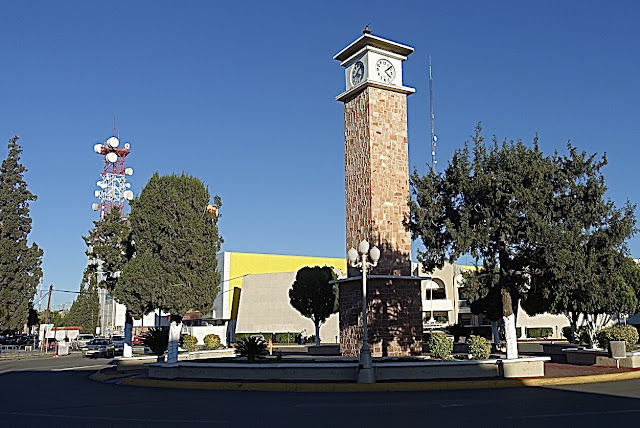 I spent a couple of hours in a bar, just putting in time, then went to the bus depot plenty early.  There I visited with a man from Monterrey - he was VERY patient with my speaking and he also spoke slowly back to me which I really appreciated.  The bus was half an hour late so I boarded at 9 pm.  There were two young men in my seats and I had to literally pound on the guy in my seat to wake him up.  I think he was faking and hoping I’d go away.  Eventually he woke up and moved to the aisle seat.  Shit I thought.  That seat’s supposed to be empty according to the last I saw on the computer screen.  Oh well.  He was very strange.  He was travelling with a group of four others and they’d get off in a town, the bus would leave and in half an hour or so, one time it was an hour and a half later, they reappeared on the bus. I don’t know what they were doing - he could sort of speak Spanish, he grunted a lot and said “Oh ya” lots.  Very weird.  I put my valuables away beneath my legs and my phone in my left side pocket away from him.  I didn’t get a good vibe from him at all but he did share his blanket with me.  He said he was going to Zacatecas too but got off an hour and a half before we got there.  He said he had a fruit stand in Casa Grande, which I couldn’t find on any map.  There were empty seats that I pointed out to him, so “he’ could have more room but no, he was fine where he was.  Oh well.  I’m hoping for a good sleep on the bus during this 12 hour trip!  Not sure what I was thinking when I booked this!