It was another great sleep in paradise!  I was up at 5 and worked on sending out my Christmas letter until I went for breakfast, then caught a bus that just happened to be passing by at a very not even close to a scheduled time.  The bus was pretty full and I had to walk down the skinny aisle with my big backpack on my back and when I turned, I pretty much wiped out the woman who was sitting across the aisle.  She gave me a dirty glare but being Mexican, she was pretty short so I probably could have taken her if it came to that.  The bus ride was about an hour and I was sitting beside a young girl who was talking on her phone for the first 30 minutes, then after she hung up, she played a song out loud and sang to it - out loud.  WTF I thought.  If my phone made any noise, I would have started playing a song too and sang aloud to it.  I hoped she wasn’t going to croon the whole way to Creel and thankfully one song was enough.  I couldn’t believe it but I’ve run into that before. There is no personal air space anymore I guess.

Upon arrival in Creel, I was accosted by a young man asking if I had a place to stay.  This is the first town in a long time that I have arrived at without having predetermined lodging. I felt really free about that but I got here early afternoon when there is still plenty of daylight and I had seen on booking.com and AirBNB that there was a lot available.  I followed him the two, which turned into five blocks to the hotel.  My room is awesome- 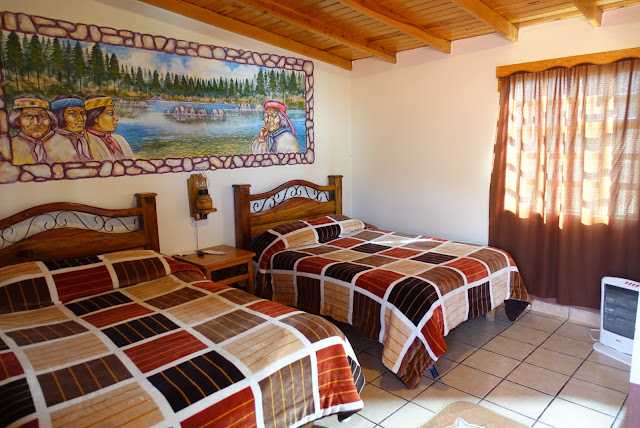 Part of the mural above- 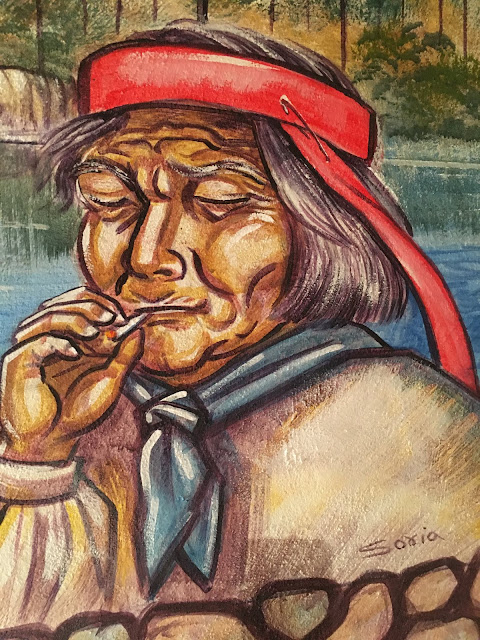 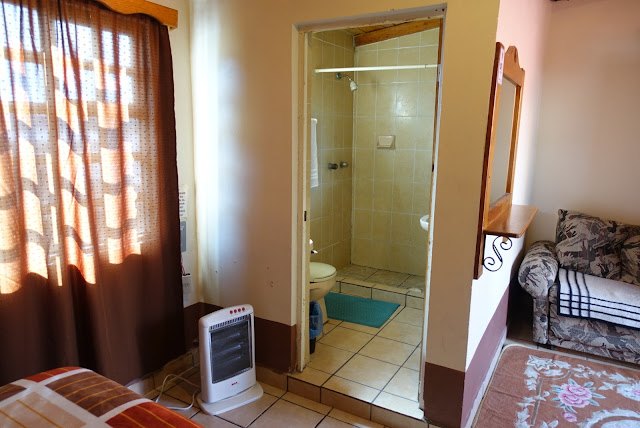 And I even have a view- 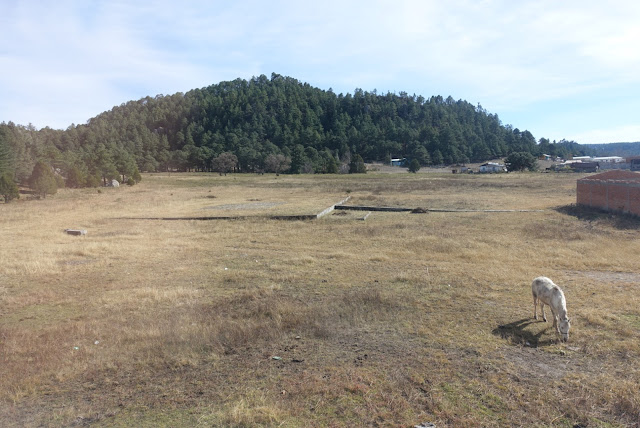 Hot water, private bathroom, space heater, tv, free wifi - all those $100/night hotels in Divisadero charged extra for wifi if you can believe that.  I also booked a tour for tomorrow at a good price because I’m joining others.  It’s hard on your own if you want to do something because they make you pay whatever the minimum is for the tour to go ahead. 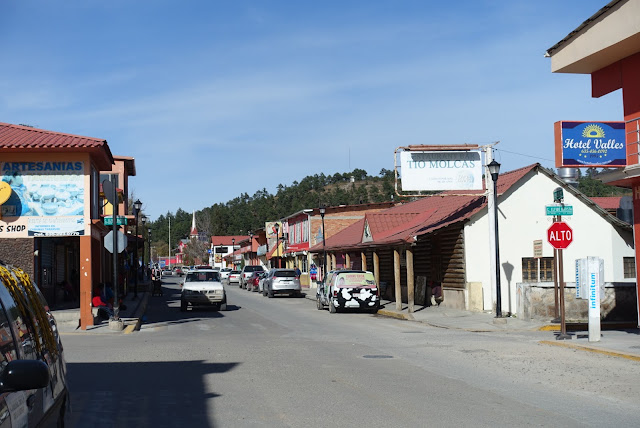 Not sure why - maybe it’s the fact that the Mexicans look like our Indigenous?  There are lots of shops and restaurants.  I think these shot glasses are cool- 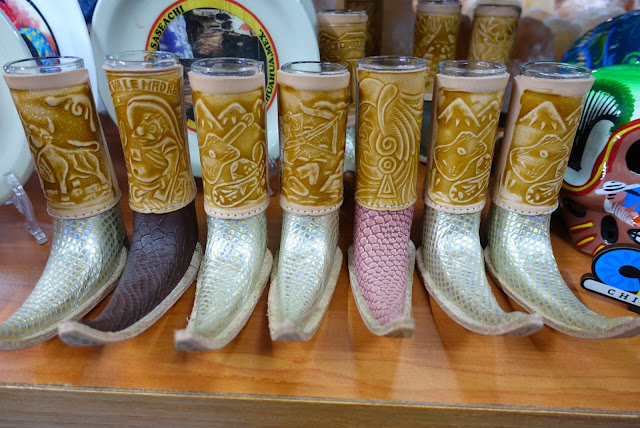 The toes stick out about four inches!  I went to the Main Square and found lunch.  The cooks call this chimichanga - it’s chicharron puffs, lechuga, zanahoria, pepino, cebolla and salsas.  It’s not the chimichanga I’m used to- 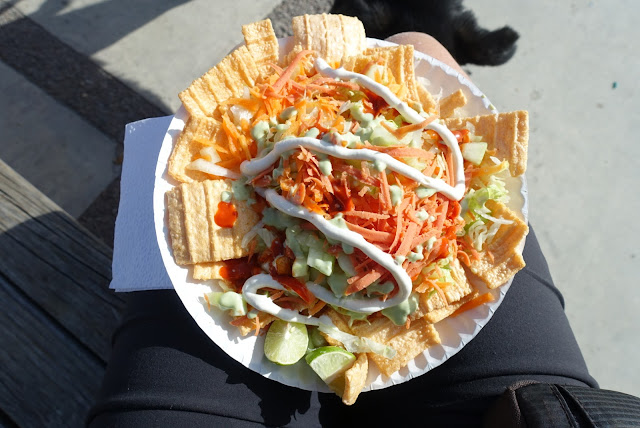 It wasn’t very filling and the two starving dogs who hung out at my feet drooling didn’t get as much as they might have.  I sat on this awesome park bench- 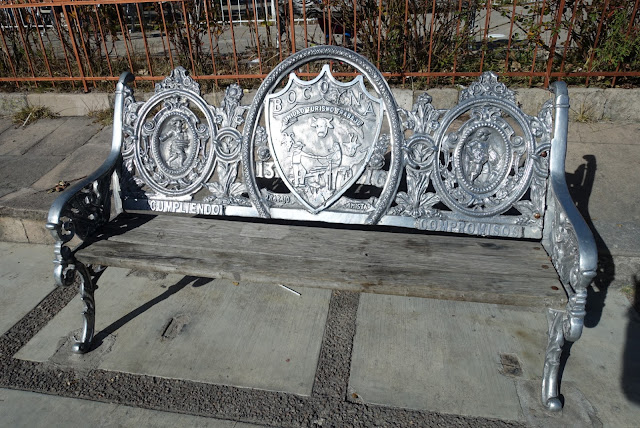 After lunch, I went to the museum which had some great displays about the Sierra Tarahumara Indigenous who are the same as the Raramuri whom I saw in Areponimichi.  They have some interesting ways of living.  When a young man wishes to marry, he or his father must go before the mayor to express his wishes.  If the mayor thinks the young man merits the girl, he visits the parents and makes the proposal.  If she accepts they become “boyfriend and girlfriend”and the future marital stability of the couple is tested before they are actually married. I don’t know if that means they live together or what.  Parents consider their children ready to marry when they understand fidelity amongst spouses, they can work for themselves and they know the value and necessity of sharing.  They can divorce if one of them does not follow these rules.  Illnesses are usually treated with herbs- 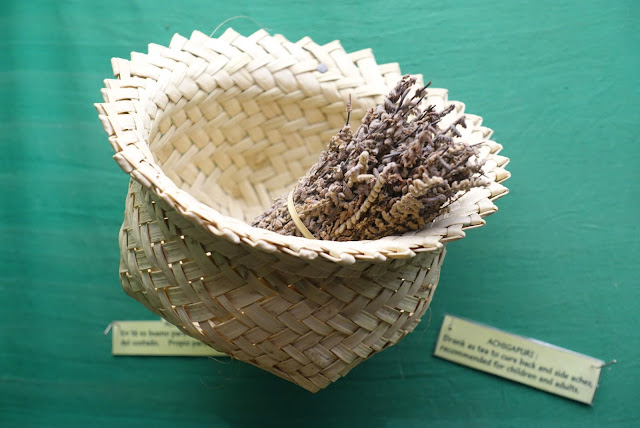 They believe they are abused by supernatural causes such as the evil eye, enchantments and the loss of the soul.  Doctors, also called owirumames use maggots, can return souls to children and adults, re-raise the soft spot on babies heads, heal from bewitching and cure with jicuri (peyote).  Men who heal with jicuri are called sipames.  They are not common men and have supernatural powers.  They help the souls of the dead ascend, cure through dreams and also return souls.  Peyote is used as an ointment to heal bruises, snake bites, rheumatism and muscle aches.

The people used to be buried as mummies and in positions hard to maintain normally.  They’re wrapped in petates which are palm frond blankets and tied with rope made from vegetable matter.  Mummies have been found in caves accompanied by objects related to food and drink- 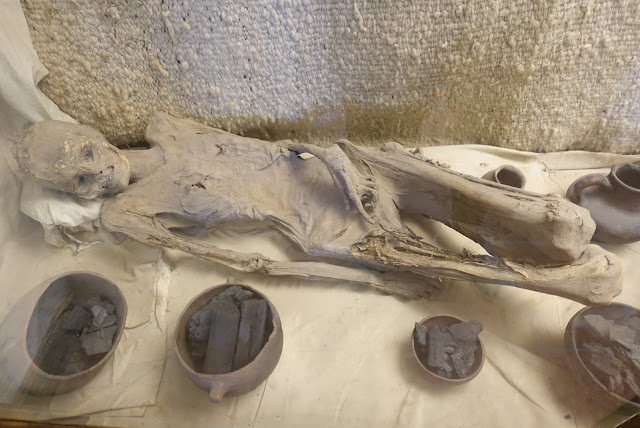 Objects left with the mummy- 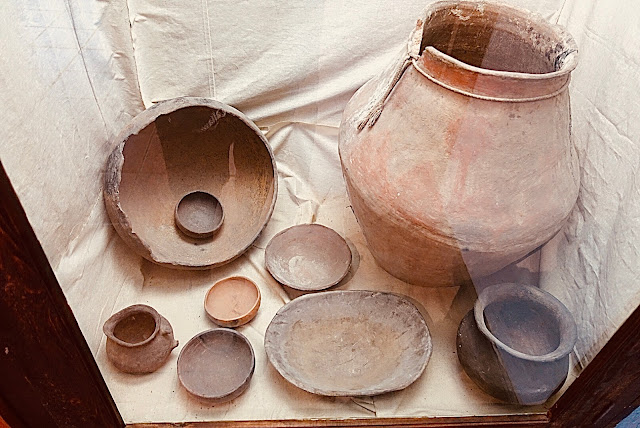 During Holy Week, the doll represents Judas and he represents the annual life cycle - spring means new life and nourishment for man and animals.  The wall information said Judas’s erect penis represents fertility and creator energy.  I looked high and low but I couldn’t find a penis.  He reminds me of Maximon in Guatemala- 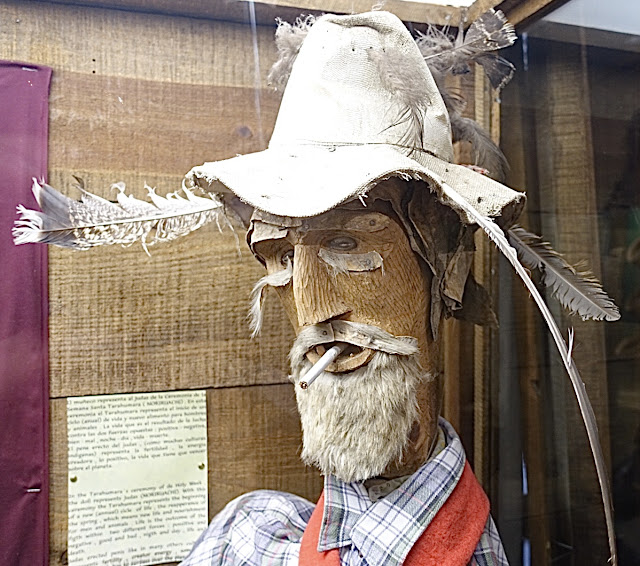 There were also displays of Sierra Tarahumara fancy dress and many women walking around town wear clothing like this.  It’s not just for the tourists, it’s how they dress- 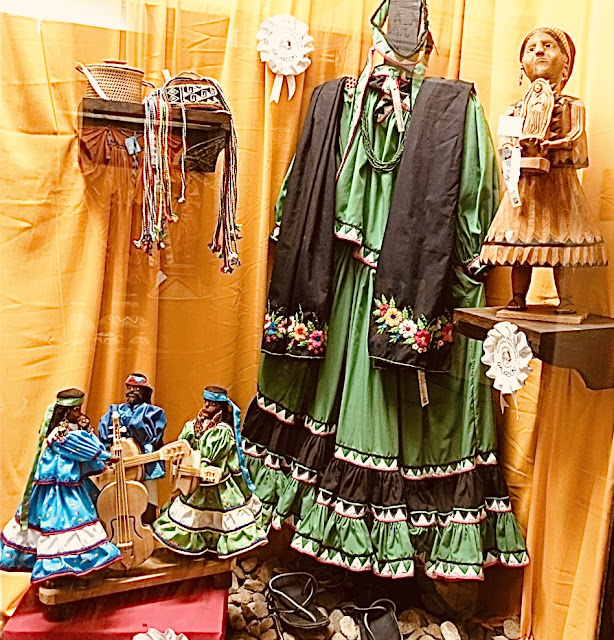 Raul Jiminez has a display of photographs showing how the Ramaruri celebrate death. 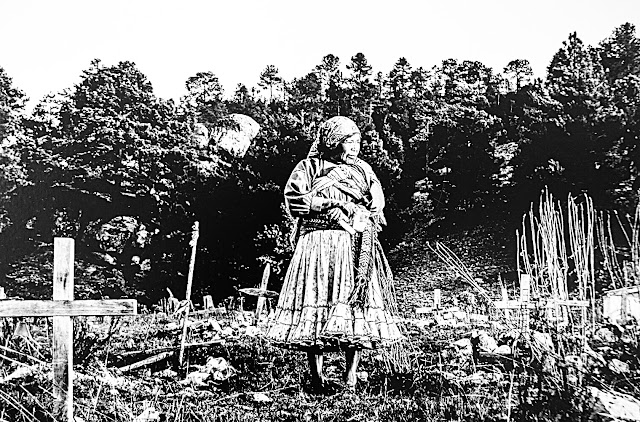 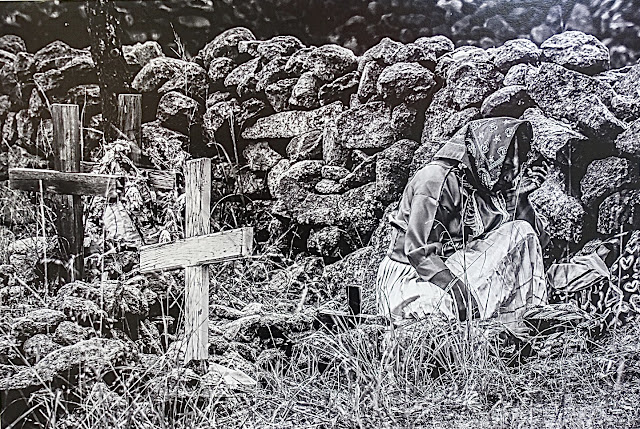 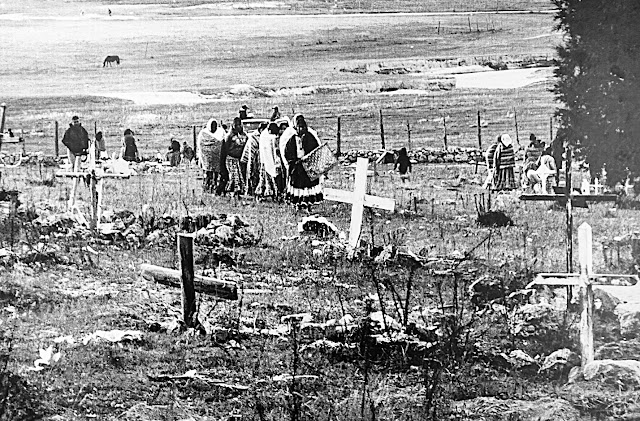 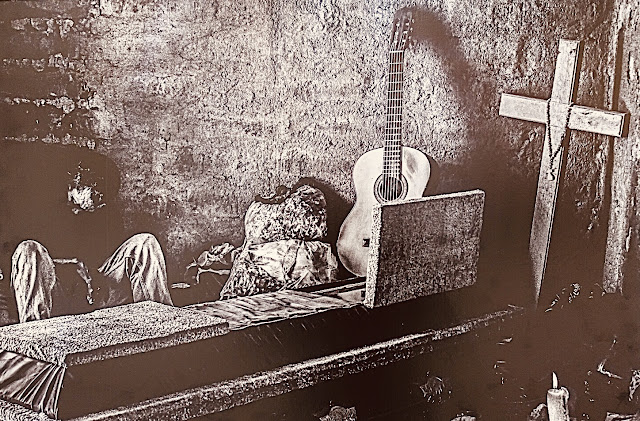 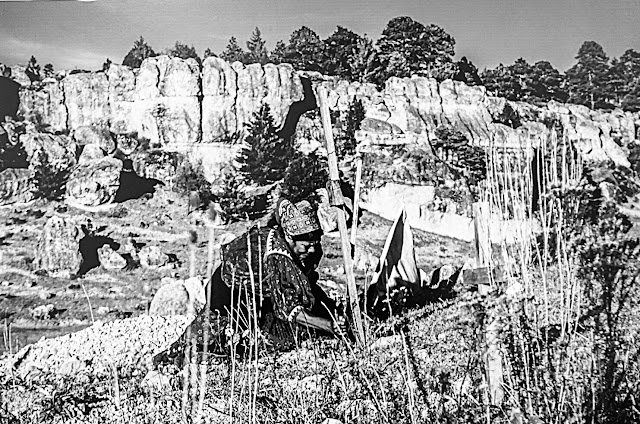 After, I walked to the church.  There are two but only the new one was open- 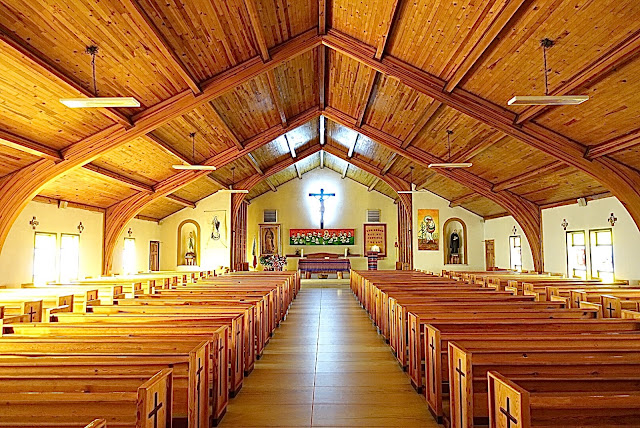 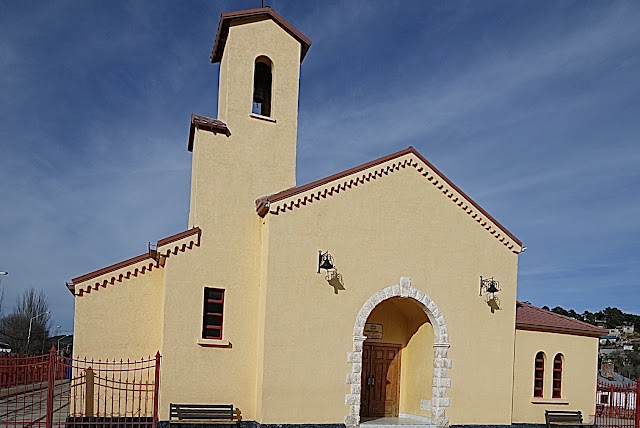 It took a long time to find a liquor store and most people didn’t know where it was or even if there was one.  Only a few tiendas sell beer and for obvious reasons.  I didn’t see anyone drunk, but I certainly saw a lot of men drinking on the street.  Not that I have a problem with that but some do.  At the liquor store they had premixed cups of micheladas which would be very useful if you liked them- 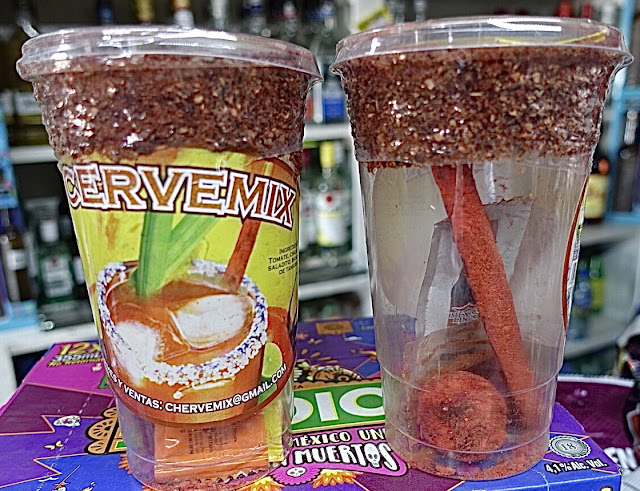 They sell a local liquor made from cane sugar.  I think it’s Chihuahua’s answer to Branvin Sherry- 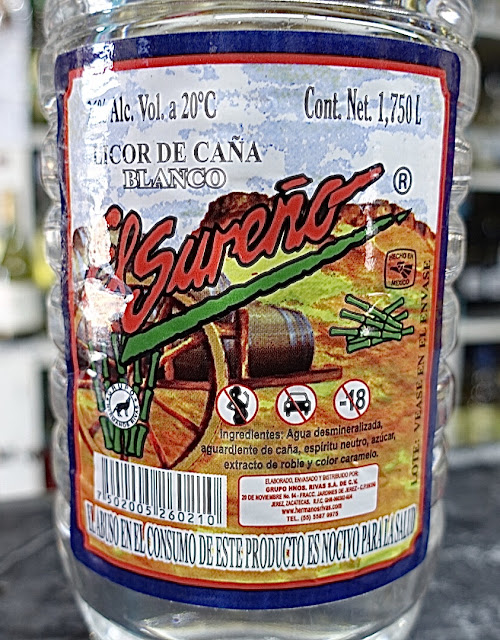 Back at my hotel room, should I be worried?- 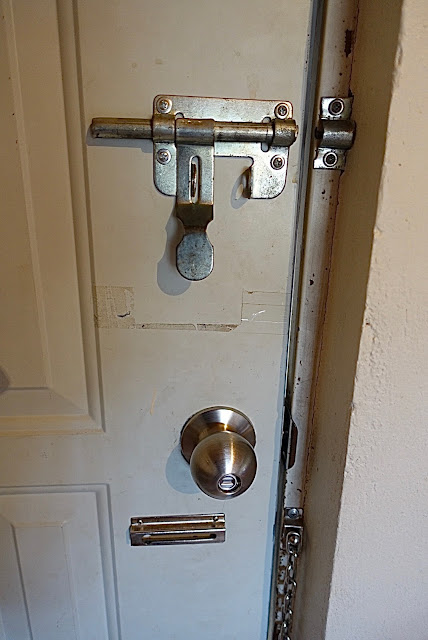 My tour leaves at 9 tomorrow morning from the front desk.  I’m looking forward to seeing a waterfall, frog and mushroom rock formations, a cave, a lake and a mission!