I’ve had a sad day.  This morning Mom Imessaged to say that my Uncle Ross who is 87 (I bet he doesn’t even know he’s giving the love sign - or maybe he does) -

my Mom’s oldest brother, my cousins Gary, Leanne and Deborah’s Dad, my Auntie Lorraine’s husband and my favourite Uncle, (sorry other uncles)  had a heart attack on the farm at Wauchope this morning. It took the ambulance one hour to get there - I don’t know why - it was very foggy but they only live 15 miles from Redvers.  Stars couldn’t come either because it was so foggy.  Apparently a Doctor was going to ride in the ambulance with him to Regina, so.....

I took an Uber to the bus station and my driver was so kind.  He spoke slowly and I understood everything he said.  The bus was ultra modern, was only 10 minutes late leaving and it was only half full. I had two seats to myself but they are so wide that’s not even important.  It took three hours to get to Guanajauto only because we did a bit of a detour and stopped in Salamanca.

Along the way there were mountains in the distance but the rest of the landscape was fairly flat.  There are a lot of vegetables planted, everything is irrigated and there are a lot of huge manufacturing plants- 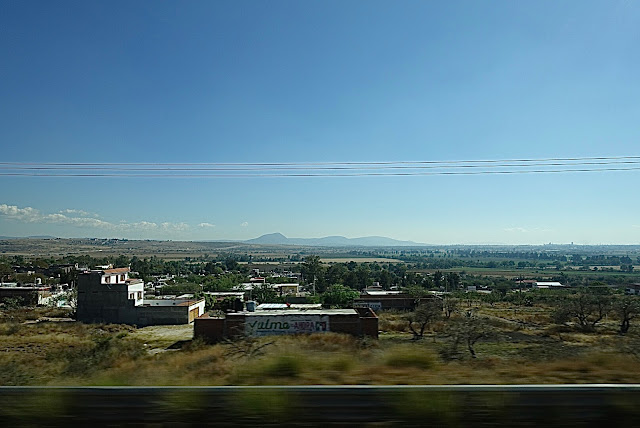 Once in Guanajauto, I caught a local bus to Plaza Los Angeles and started the ascent up to my place- 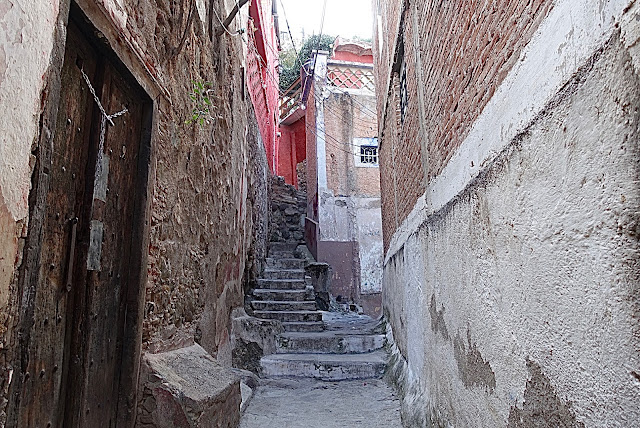 The owner of my apartment sent twelve pictures with arrows showing the way - that’s how complicated it is.  There is no way in hell I could have found it on my own.  Near the top, a woman said to me DMilton, all slurred.  It took me a moment to realize she was saying the name of my host.  She pointed up!  I don’t suppose there’s much doubt when you know a neighbour has an AirBNB and you see a white person walking with a backpack in your neighbourhood.

It’s a very large apartment with a kitchen- 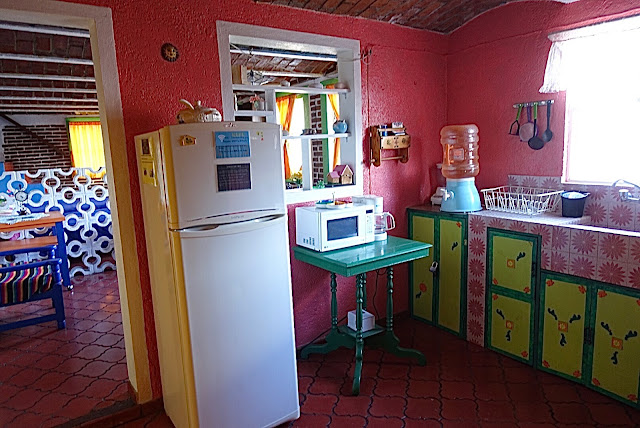 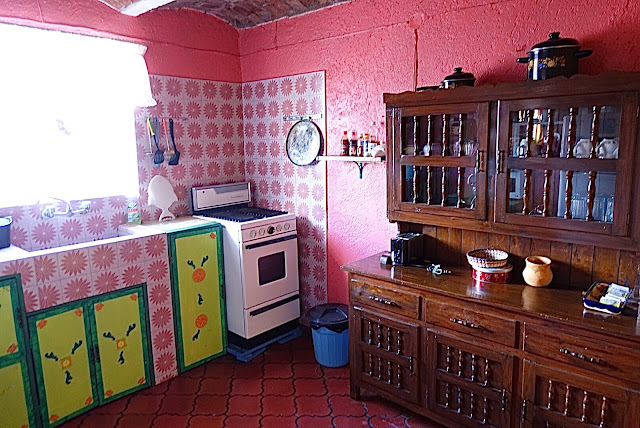 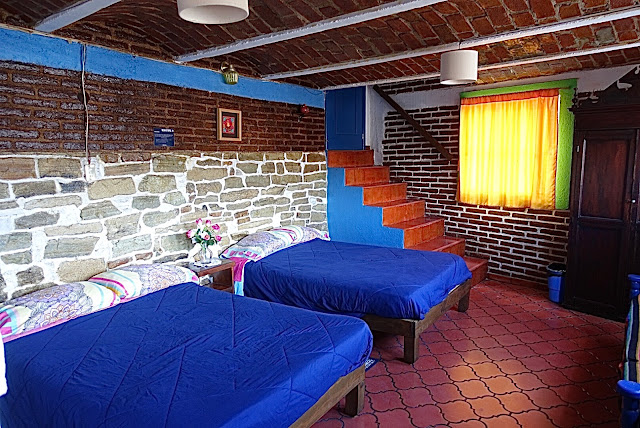 A dining room - looking from the ‘bedroom’ through to the kitchen- 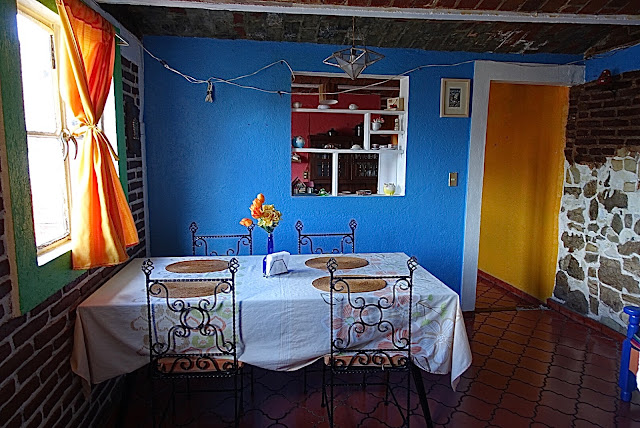 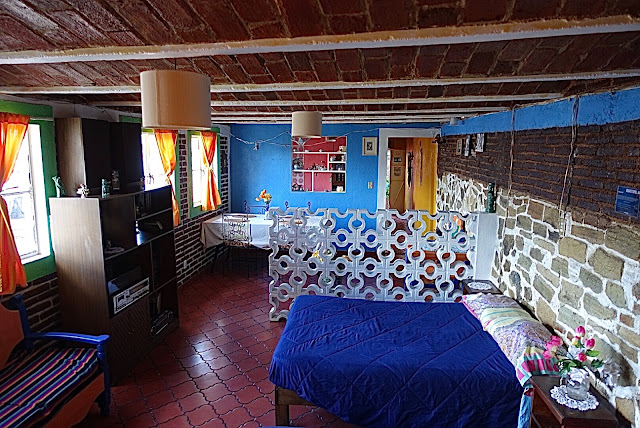 I’d say the climb was worth it!

After getting settled I went exploring.  My first stop was in the Plaza La Paz- 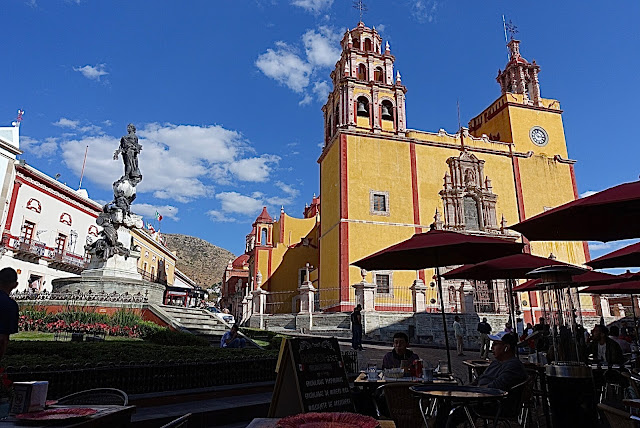 where I had lupper - enchilada mineras which is Guanajauto’s signature dish.  As the city came to prominence as a silver mining town, enchilada mineras was created because it’s quick, easy and filled up the miners after a day of hard work. It’s tortillas dipped in red chili sauce, fried, then stuffed with cheese.  Onions, carrots and potatoes are put on top, then mayo and more queso.  A huge chunk of chicken, pickled chilies and a small salad also came with it- 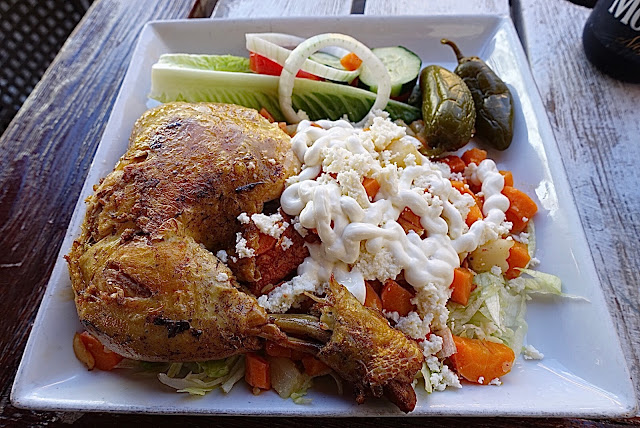 I had just ordered and messaged home to see how Uncle Ross was doing.  Carolyn my sister quickly responded to say he had died.  DIED!  He had another heart attack in Regina and died.  I cried for two hours. I had a hard time eating, I lost my appetite.  I had no desire to check out anymore of this lovely town. I can do that tomorrow or the next day.  Life is so interesting if we pay attention. Today would have been my Grandma’s, Uncle Ross’ mother’s 102 birthday.  Why die today?  Yesterday, my cousin Deborah, her husband Todd and son Lane arrived from Newton, Iowa for a surprise Christmas.  Two of Uncle Ross’ grandchildren, who live in Calgary, just happen to be in Carlyle celebrating Christmas with their Mom’s family.  Deborah came for a reason, she told me she knew she had to come and perhaps Uncle Ross waited until she’d arrived and they’d had a visit.  Who knows for sure?Auntie Lorraine said he hadn't been feeling well since Saturday but couldn’t get in to see the doctor.

I grew up with Uncle Ross in my life because he lived with his family just a mile and a half up the hill.  Gary is my oldest Madsen cousin and growing up he and I spent a lot of time together.  Uncle Ross was always interested in what I had been up to and he always gave me a big hug.  He never said very much to me but I know he enjoyed listening to me talk.  I always tried to stop in for a visit when I was in Redvers.

So I sat at my table and cried.  I was sad because maybe I felt guilty that I didn’t visit as often as I could have. And death is so final.  Once someone dies, there is no more.  Anything you might have liked to have said - too late.  You will never see that person again, unless there truly is a “heaven”, and perhaps it’s also a reminder of one’s own mortality and that of those around us whom we love.  What’s so special about grief though is that there is no grief without love so maybe grief is a small, sometimes huge, price to pay for having had the privilege of loving someone. 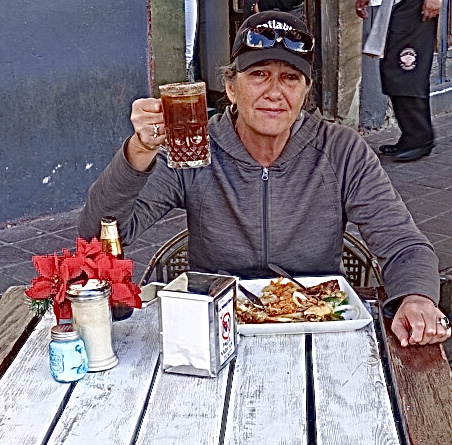