This morning I visited the Norbulingka Summer Palace.  Norbulingka means Treasure Garden or Treasure Park and is a World Heritage Site.  It served as the summer home of the Dalai Lama.  It was initially built by the 7th Dalai Lama, covers 36 hectares and contains over 400 rooms.

There are numerous palaces such as the Kalsang Palace which was built in 1755 and named after the 7th Dalai Lama.  It houses a protector deities hall, a bedroom, assembly hall and a reading room.  Administrative affairs were carried out here- 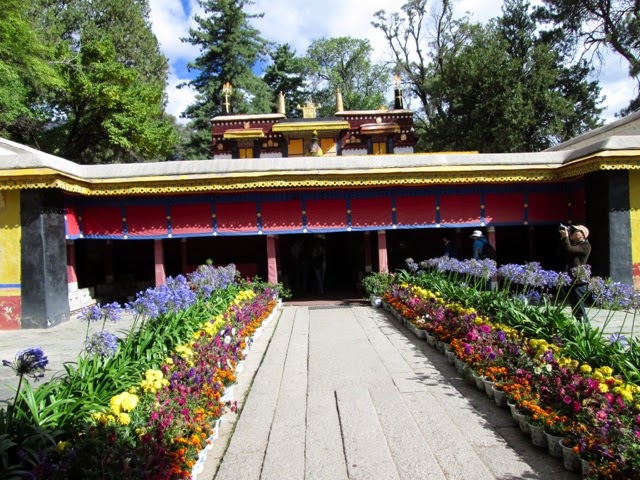 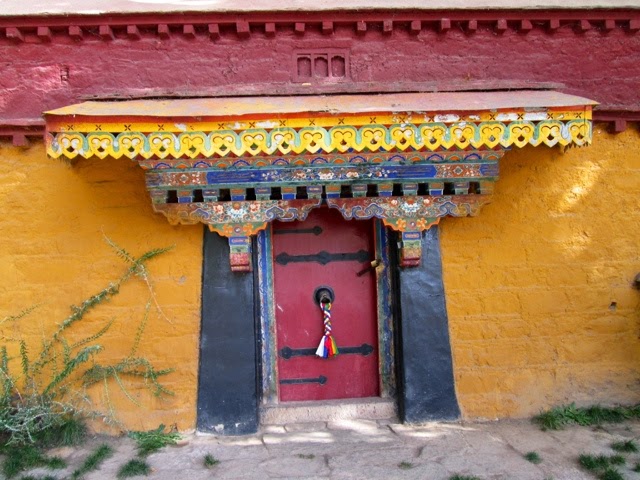 Another palace is the Chensal, first built in 1922 for the 13th Dalai Lama.  It contains statues, murals and sculptures- 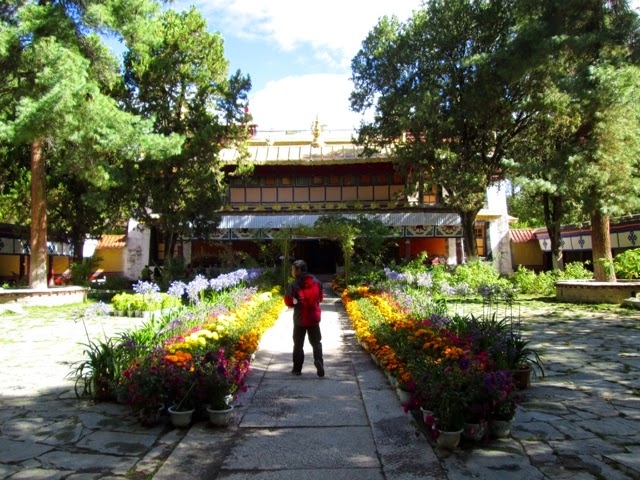 The Kalsang Dekyil Palace was also built in 1922 for the 13th Dalai Lama to practice tantric Buddhism.  It contains murals and wood carvings.  Tantric Buddhism is the short way to approach enlightenment. 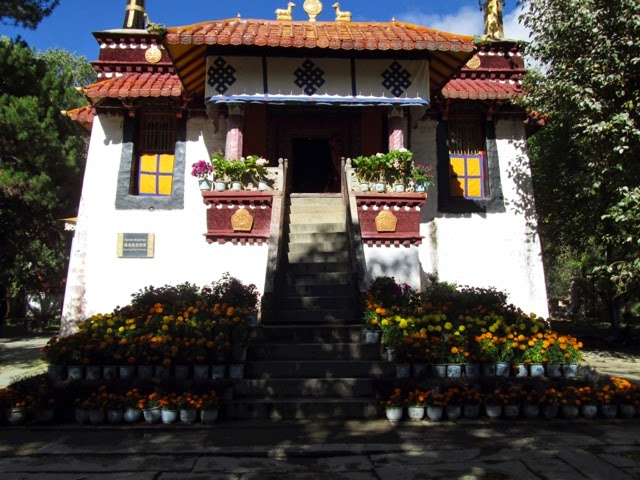 The Dadan Mingjur Palace was built for the 14th Dalai Lama in 1954.  There are more than 30 rooms and its murals depict the history of Buddhism in Tibet- 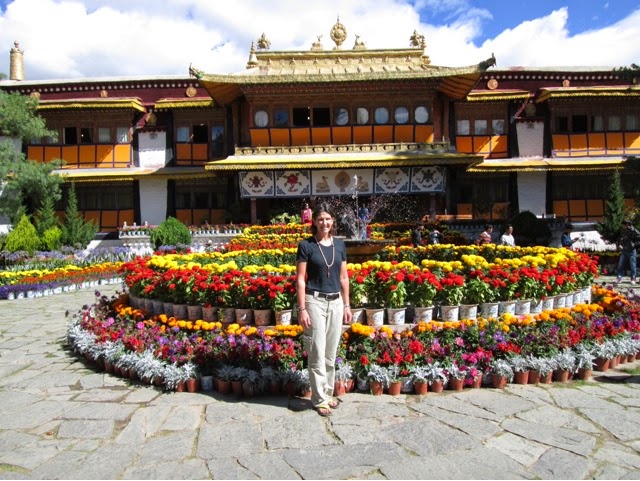 The Truzing Palace was built during the reign of the 8th Dalai Lama - 1758-1804.  Inside is an eleven headed, thousand - armed and thousand - eyed Avalokiteshavara (Budhasatva of Compassion) and over 3600 scriptures- After the Norbulingka, I went to Old Town.  Here is a small temple.  These are prayer wheels and are filled with up to a mile of prayers which are recited with each revolution of the wheel.  Pilgrims spin the wheels to gain merit and to concentrate on the prayers and mantras they are reciting. 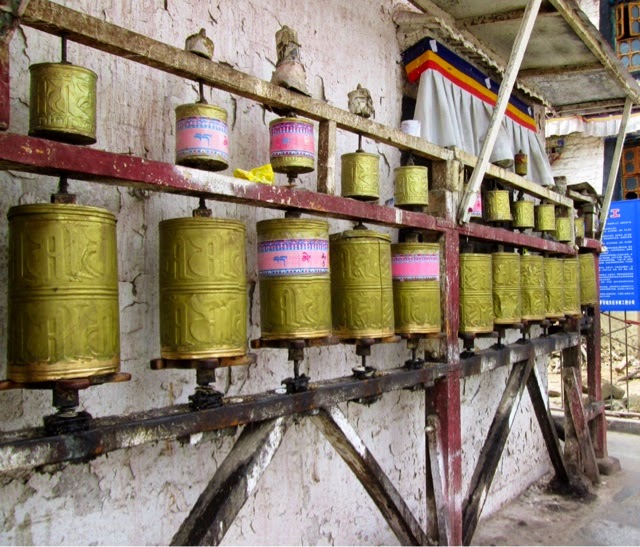 This is a Tibetan manilhakang which is a large prayer wheel inside a temple.  People also spin it while walking around it. 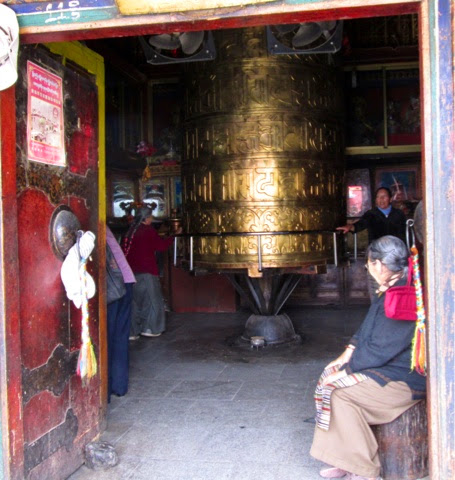 Here's a nunnery with prayer wheels outside.  The Lingkor Road passes by.  It's 10 km all around Lhasa.  It takes 3 hours to walk and is very popular with the pilgrims. 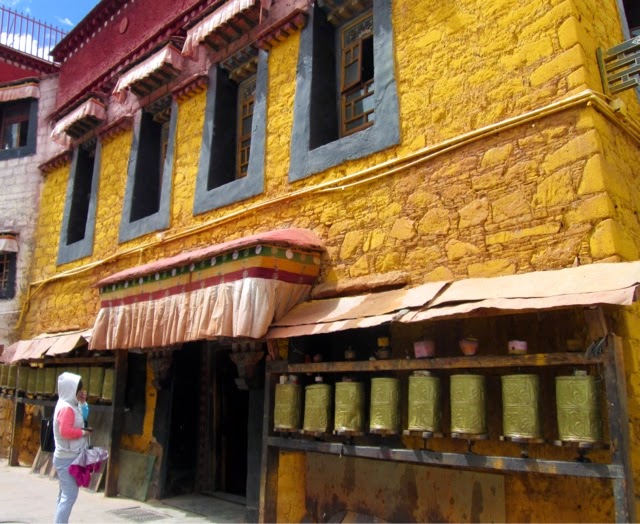 Butter lamps are continuously lit in all monasteries.  Today, ghee is often used instead of expensive butter.  The Tibetan people believe that by lighting the candles, it enlightens their minds and also reduces sin.  When one dies, the soul hangs around for 49 days.  This is called bardo.  After 49 days, rebirth happens and your 'new' you  depends on what you did in your last life. 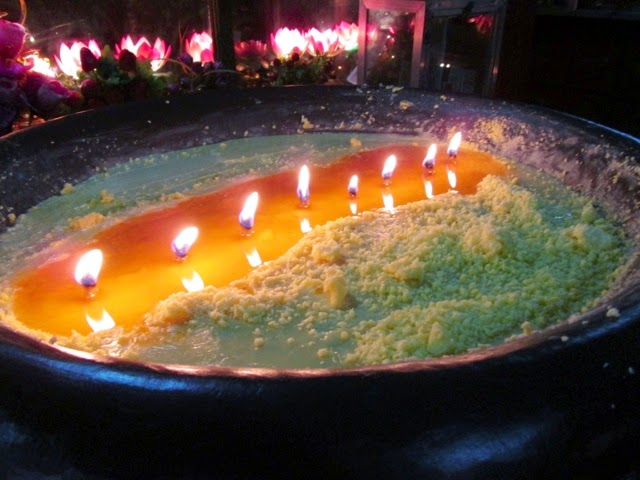 This picture is not clear because I took it without a flash (no photos allowed) but it is a good example of what one finds in a temple: money, 7 bowls of water representing the "Seven Examined Men" who were the first 7 monks in Tibet or the first seven steps of Buddha and Buddhas behind glass- 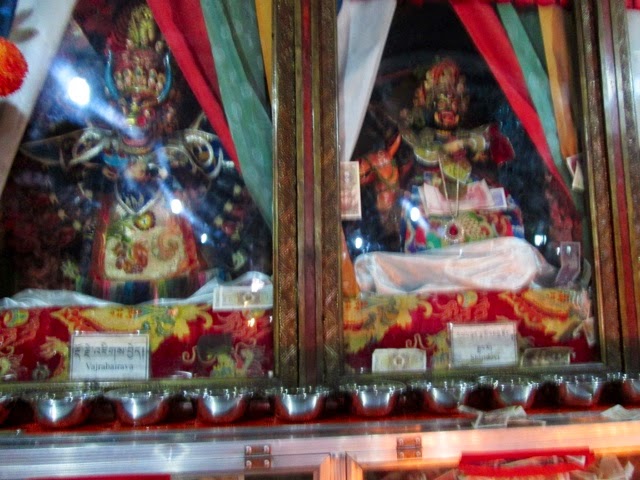 I went to the Sera Monastery which was founded in 1419.  It's the third largest monastery in Tibet. 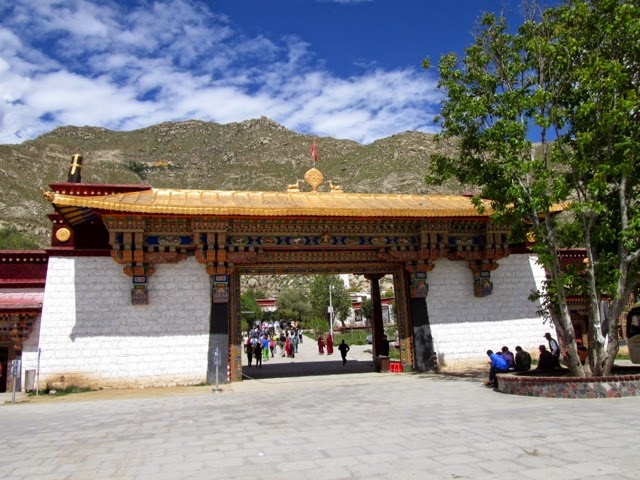 One of the many colorful entrances- 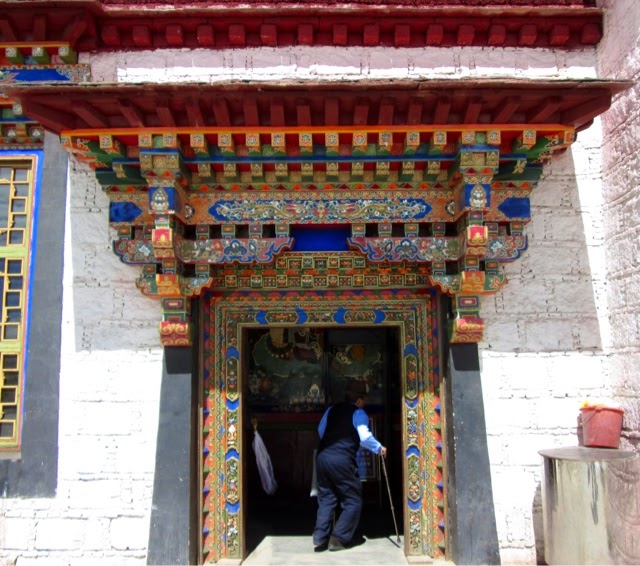 It's well known for the debating that the monks do every afternoon.  To me, it was just a put on act to attract the tourists- 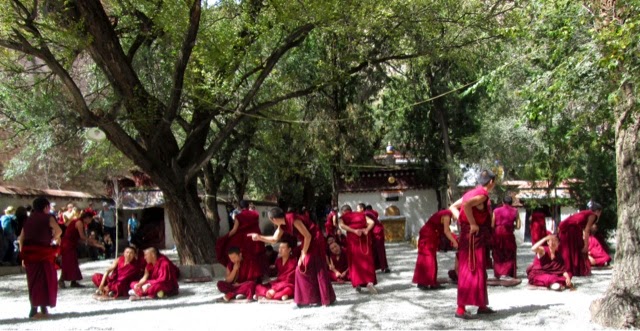 This is the temple- 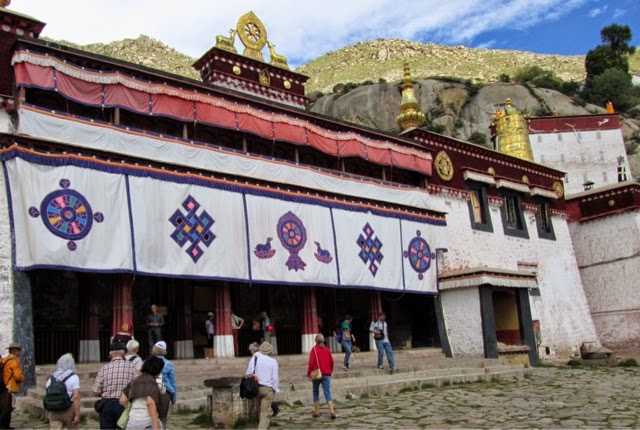 No pictures allowed but I took these anyway.  The Buddhas are gigantic and usually behind glass.  This is the future Buddha - Matriya.  He represents a new world and new generations. 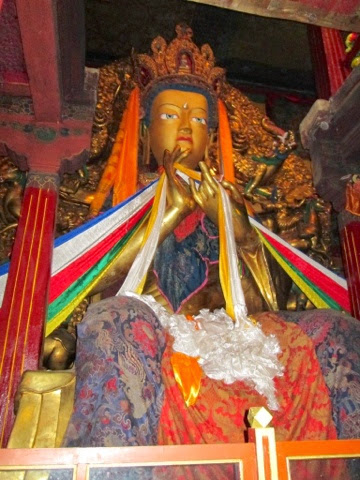 This is also the Matriya, the Future Buddha.  (Jampa Gonpo in Tibetan). 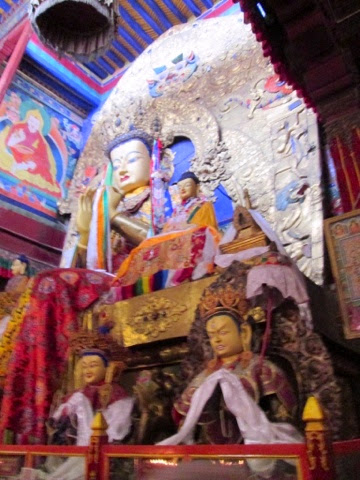 This couple is worshipping at a small shrine while the woman on the right is walking in clockwise circles with her prayer beads.  They fold their hands in the shape of a lotus flower that has nearly opened- 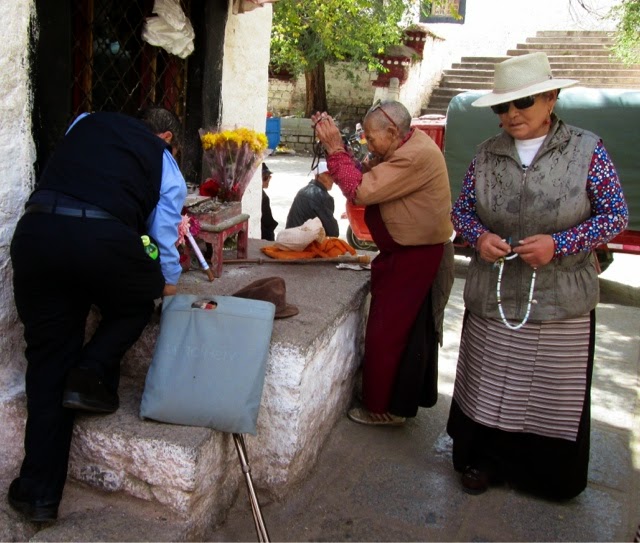 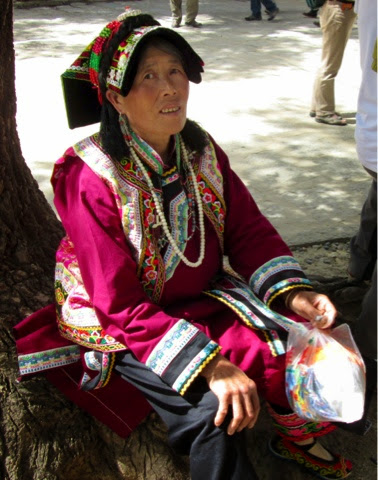 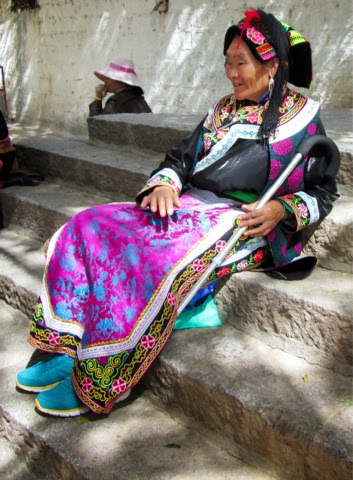 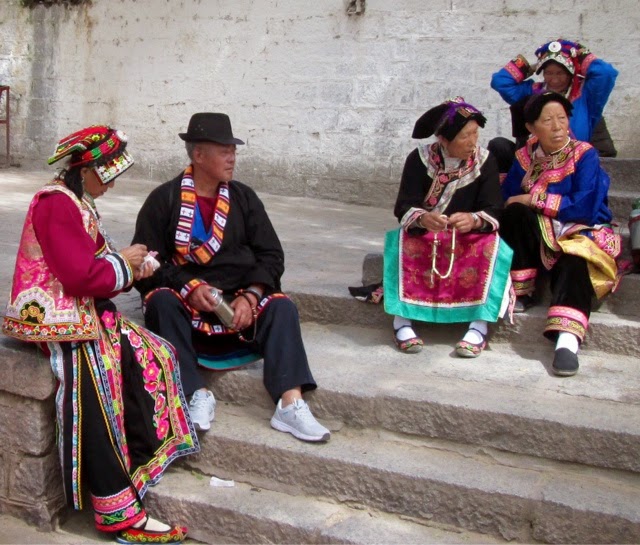 This is the wheel of life.  There are 3 things in Buddhism one must overcome to be enlightened- desire, ignorance and anger.  Desire chains us to samsara, the endless cycle of birth, death and rebirth. Yama, The Lord of Death, holds the wheel in his mouth.  The images in the second circle are ascending through the realms on the left and descending on the right.  The third ring has 6 sectors that represent the six realms of rebirth: gods, battling demi-gods and humans, as well as hungry ghosts, hell and animals.  We are reborn, depending on our karma.  The twelve outer pictures represent the "12 links of dependent origination" - codependent and casual experiences of life leading to samsara.  One can see a blind woman, a potter, a monkey, men in a boat, a house, lovers, a man with an arrow in his eye, a drinking scene, someone grasping fruit from a tree, pregnancy, birth and death.  All of these depict either desire, anger or ignorance. 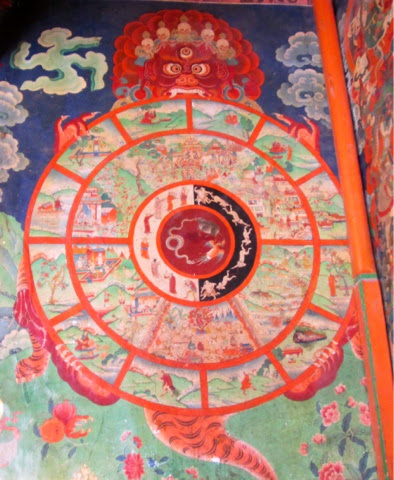 In the center, the cockerel (representing desire or attachment) is biting the pig (ignorance or delusion) which is biting the snake (hatred or anger). 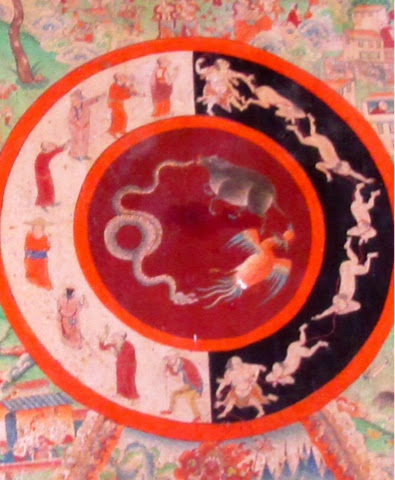 It was Peking Duck for supper!  Wraps, sliced onion and cucumber, a nice thick sauce and of course the duck- 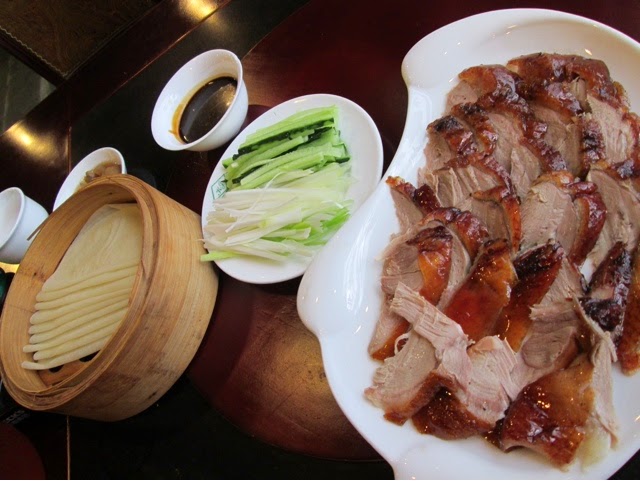 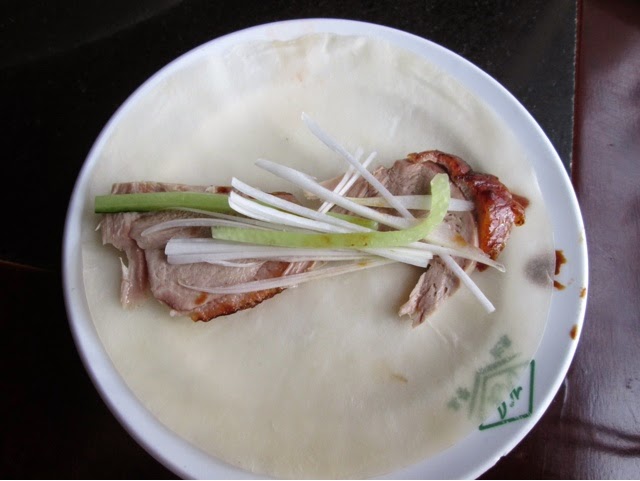 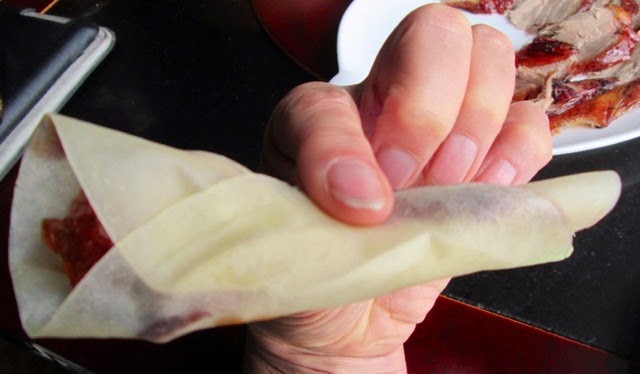 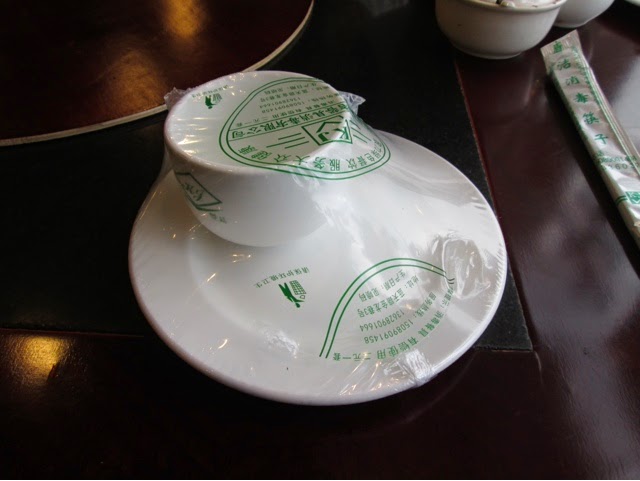 We've spent 2 great days here in Lhasa with perfect weather and fantastic sites and food.  Looking forward to moving on!