This morning while having breakfast, I heard what I thought was a Canadian accent.  Melanie is from Sherwood Park, AB!  We had a nice visit, then spent the day together visiting one of the coolest places I have ever been in my life - Pashupatinath Temple.

This is Nepal's most important Hindu temple and because I am not Hindu, nor from Tibet, Nepal or India, I could not go inside.  Here, Shiva is celebrated as the lord of the beasts.  This temple was constructed in 1696- 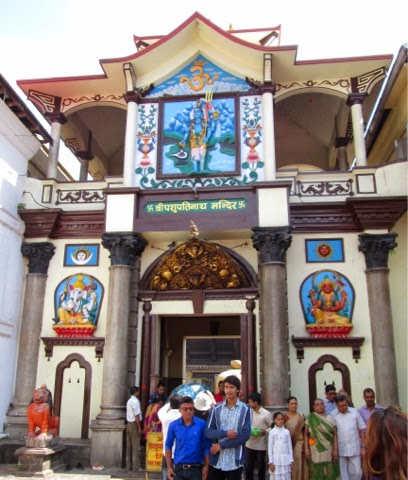 This is the 'behind' of Shiva's bull Nandi inside the temple- 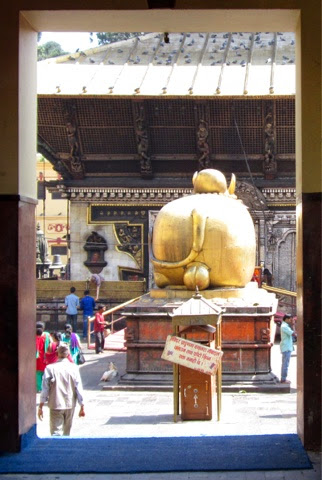 Tika powder is a symbol of blessing from the gods, worn by both men and women.  It can be a small dot on the forehead, or full on color with yoghurt,  It represents the all knowing third eye and is also an energy point.  It's an acknowledgement of a divine presence and a sign of protection. 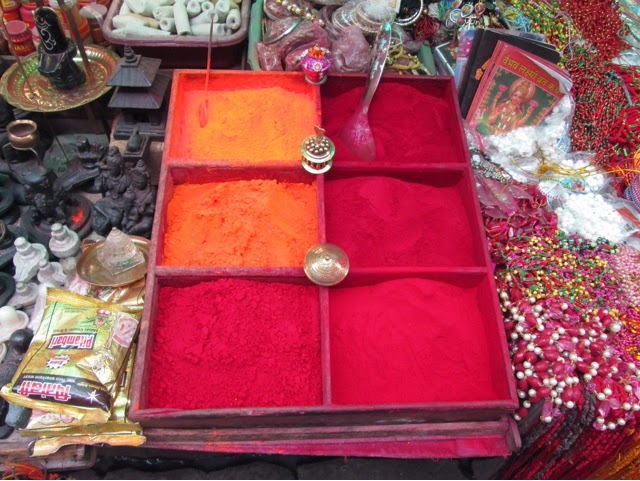 The Bagmati River is very polluted but still extremely sacred.  Here, two kids were swimming in it, right beside where ashes, after the cremations, are swept into the river- 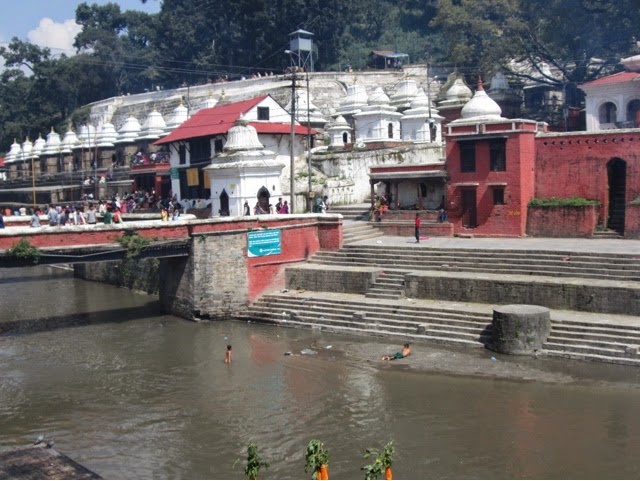 Cremation ghats are used for open air cremation. This is a fancy one because it is decorated with marigolds- 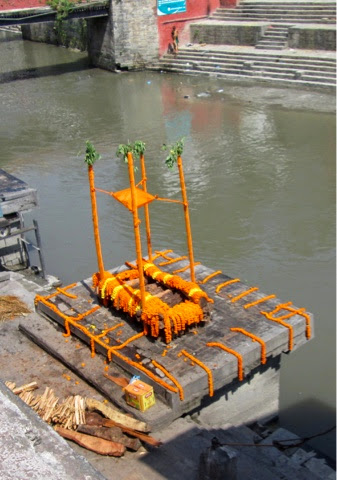 then cremated on wooden pyres- 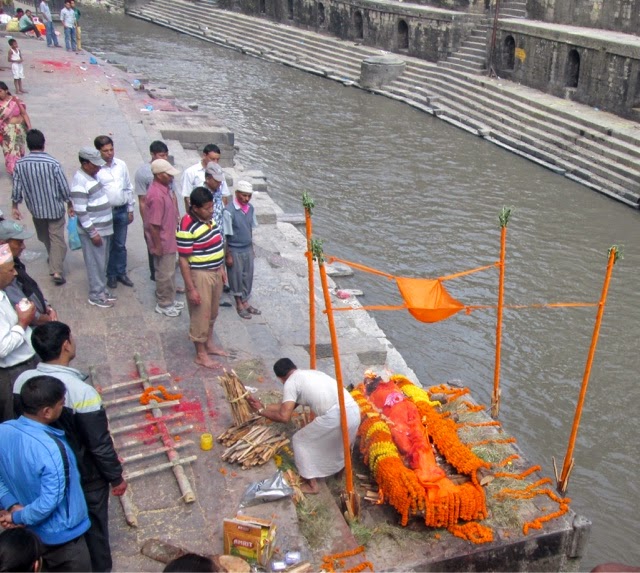 The wealth of the family determines the lavishness of the funeral.  This man might have been in the army, because before he was set alight, the Last Post was played by the soldiers you can see to the left of the photo- 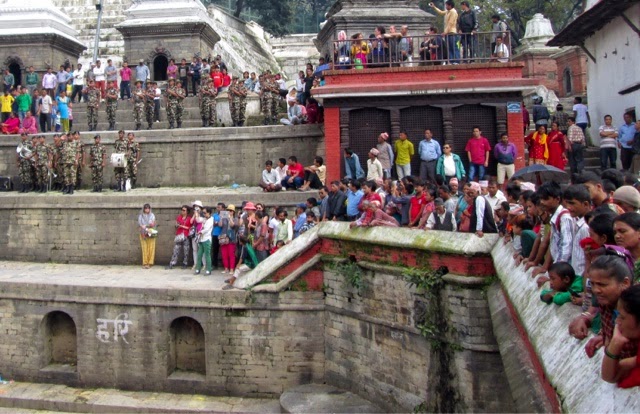 These were the mourners.  A couple of prayers were said while more wood and grasses were placed below and on top of the corpse- 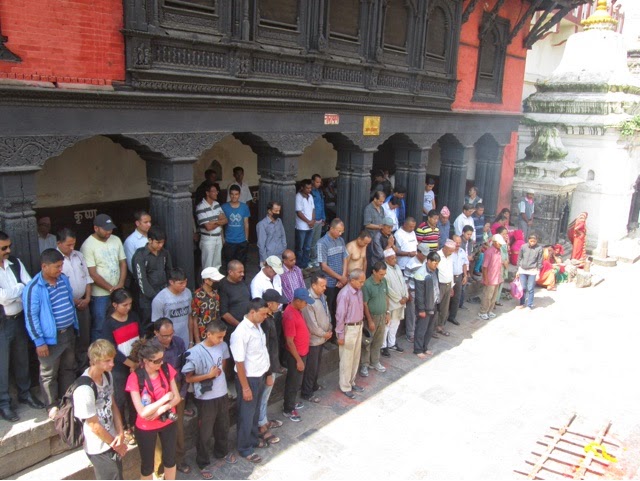 Once everything has burned, the ashes are swept into the river- 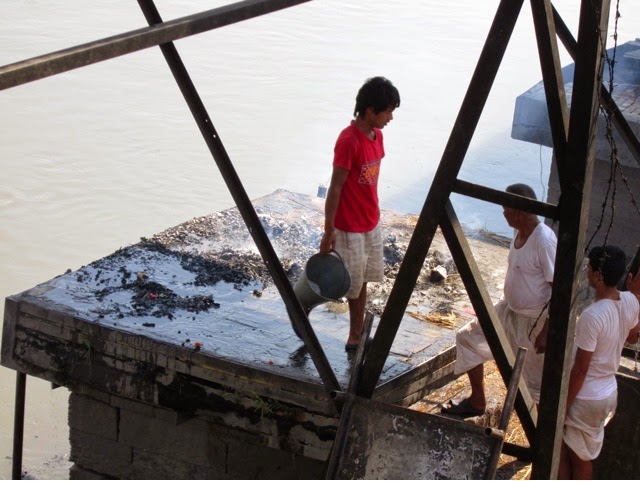 Here is another pyre of someone not as wealthy nor important.  There is no decoration- 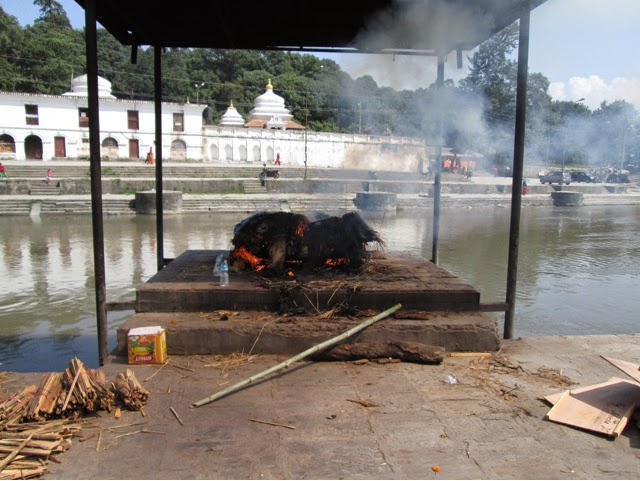 It was a powerful place to contemplate death and mortality.  Amongst all of the hundreds of locals gathered for the celebrations, I only saw one woman crying.  They certainly see death a different way than we do.

This sounds like an interesting place to spend an hour or two! 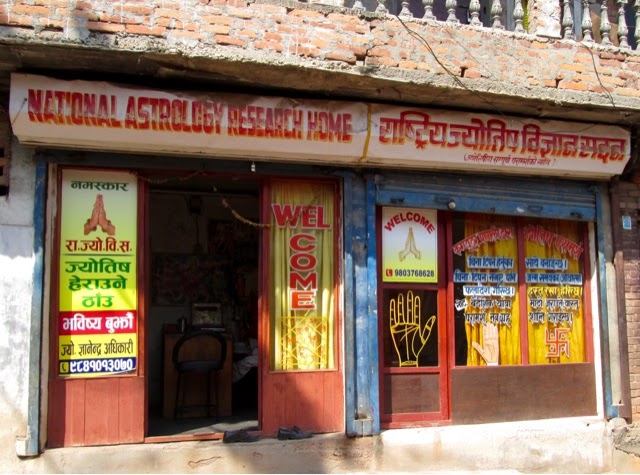 This girl was having her future read- 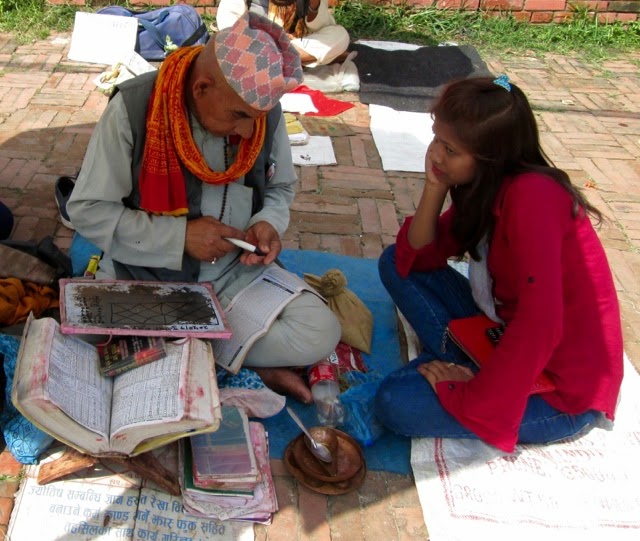 Marigolds represent long life and are used in special ceremonies.  They are sold on the street- 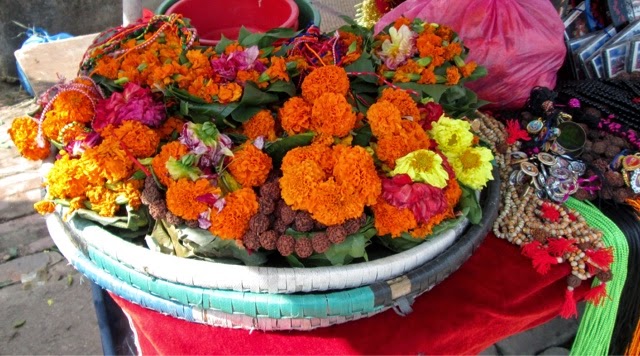 From here we went to Durbar Square, a concentrated mass of temples- 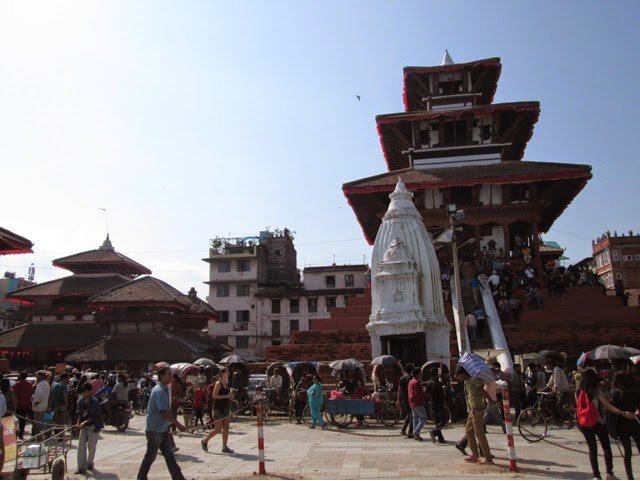 The Jagannarayan Temple is dedicated to Vishnu (aka Narayan).  He played a role in the creation of the universe.  Vishnu has four arms holding a conch shell, a disc like weapon called a chakra, a stick like weapon called a gada and a lotus flower.  It was built in 1565 and is the oldest temple in the square.  The column in front has a brass statue of King Yoganarendra Malla (1684-1709) and his queens.  It was installed in 1700.  Above the king's head is a cobra and a small brass bird is above the cobra.  Legends say that as long as the bird stays on the column, the king can return to the palace.

There are also three smaller Vishnu temples built in the late 1500s. 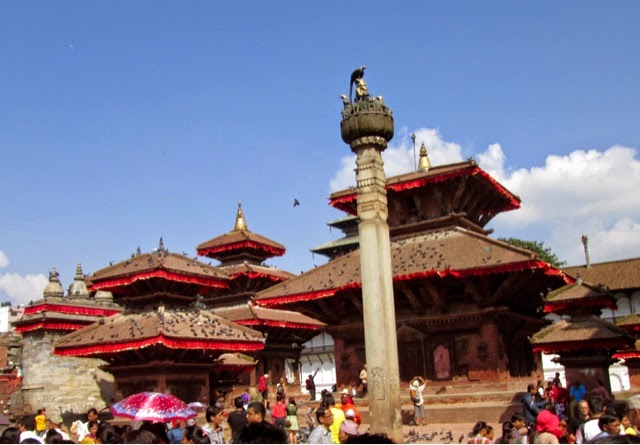 This was lunch, and it was nasty.  It's a thin dumpling exterior with red bean paste inside.  It looks like an onion, which would have tasted better! 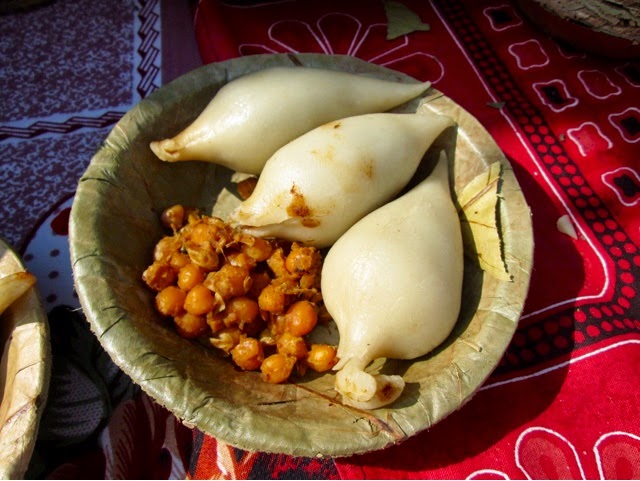 They have such a different variety of vegetables- 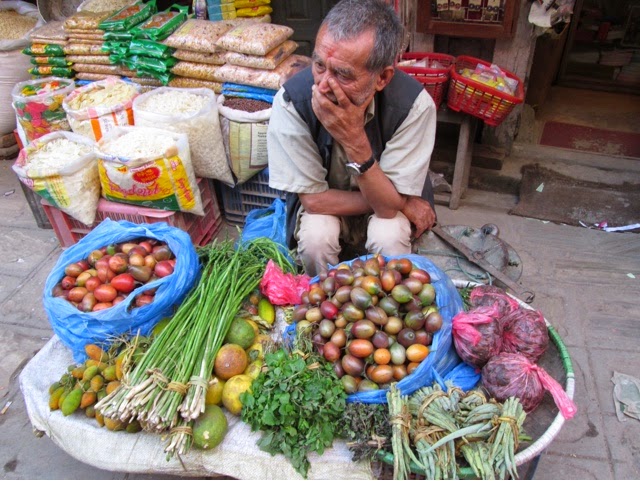 The streets back to Thamel selling everything imaginable! 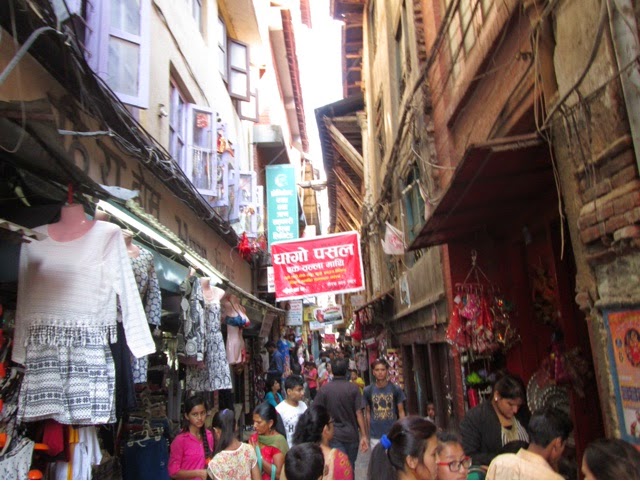 I'm not sure, but I don't think this would pass code at home!  Maybe this is why there are frequent power outages??? 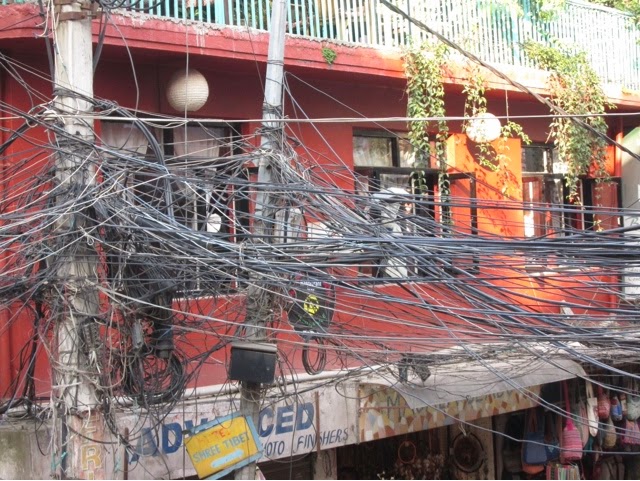 Supper was chicken curry!  Tomorrow, we're off to Pokhara for 4 nights!