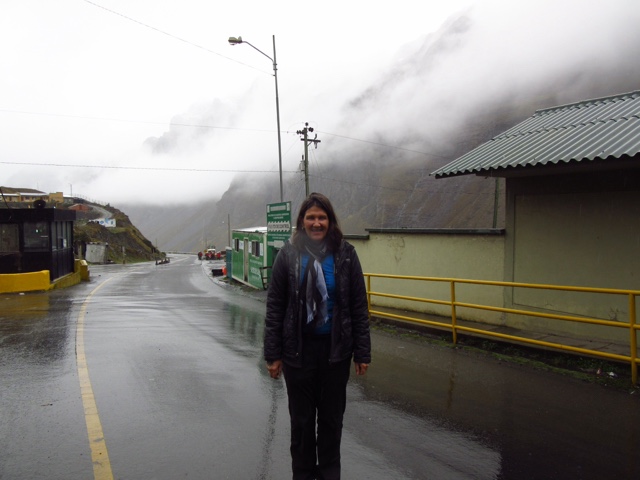 Death Road is 64 km long and mostly downhill except for about 8 km.  We put our bikes on top of the van and drove that part- 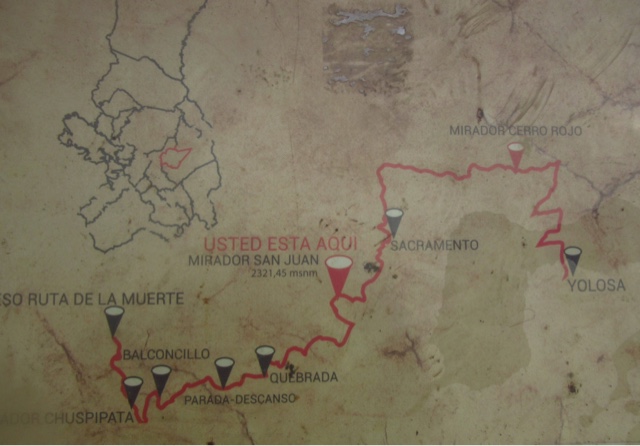 Between 200-300 people used to die here annually but few cars use the road today.  They've built another safer highway- 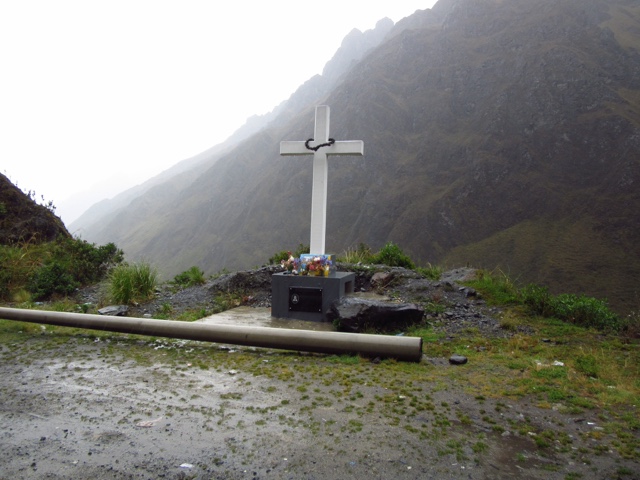 We were pretty high and had occasional glimpses of blue sky.  We were told when we booked that we would be given waterproof clothing so I left all mine in my backpack.  It wasn't even close to waterproof!  I was soaked in no time and my hands were numb.  It's hard to squeeze your brakes when your hands are frozen! 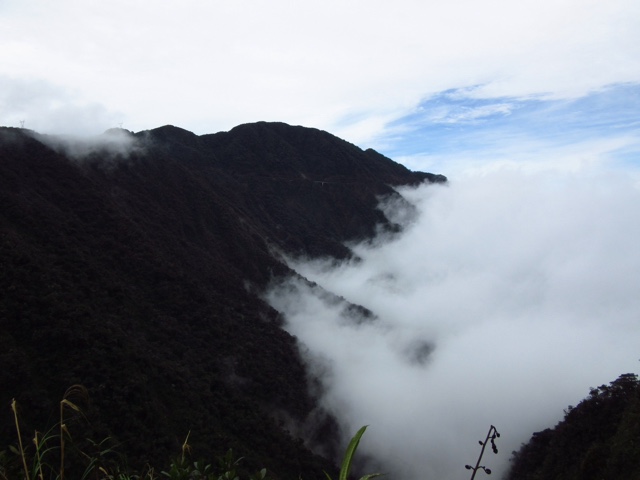 As we descended, I warmed up.  I was wearing my runners because my hiking boots were in the truck, far away in a compound, so my feet were soaked.  Once when we stopped, I could actually wring out my socks.  The road is very narrow and there are few guard rails but I went at a leisurely pace and had a great bike:  a Kona with double suspension- 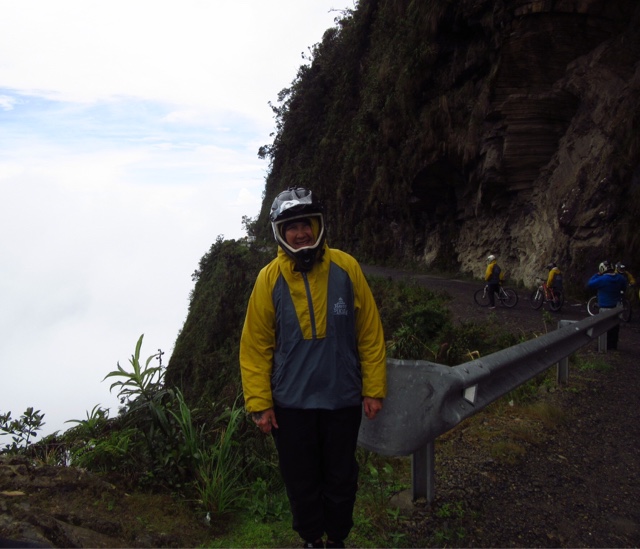 You can see someone from our group in the distance.  That's how far back I was, but there was no way I was going over the cliff and it was my first time mountain biking.  Some people just flew past me- 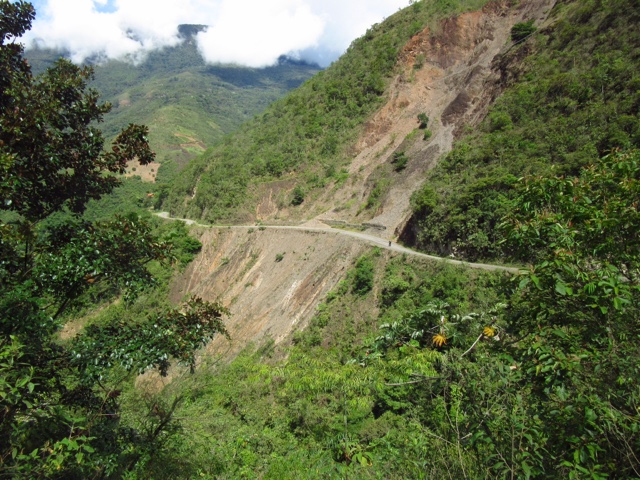 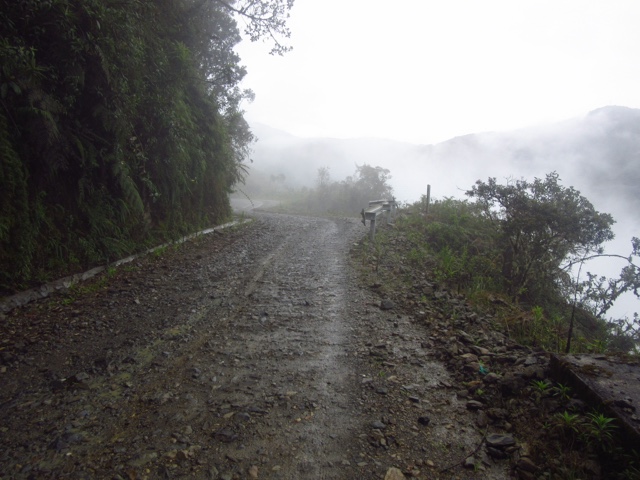 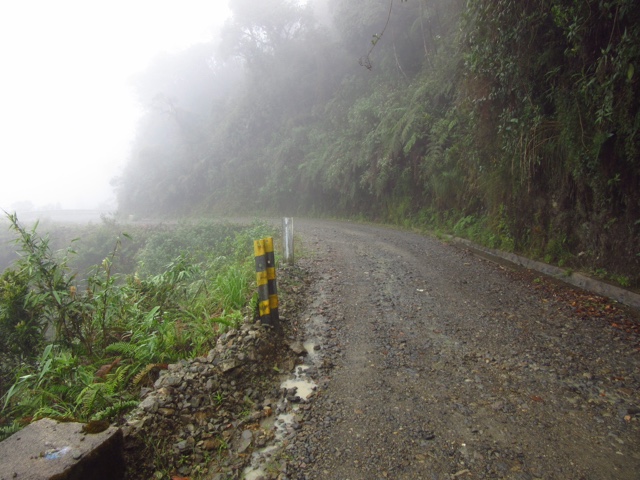 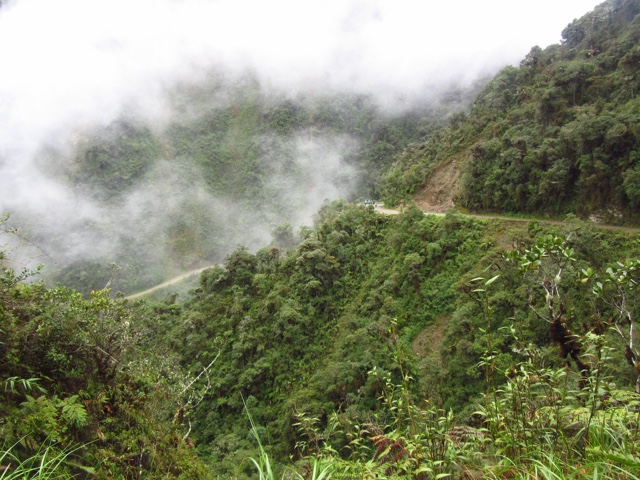 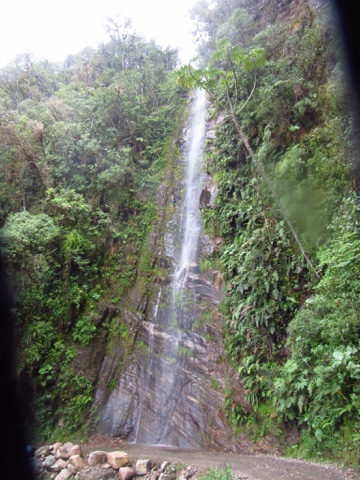 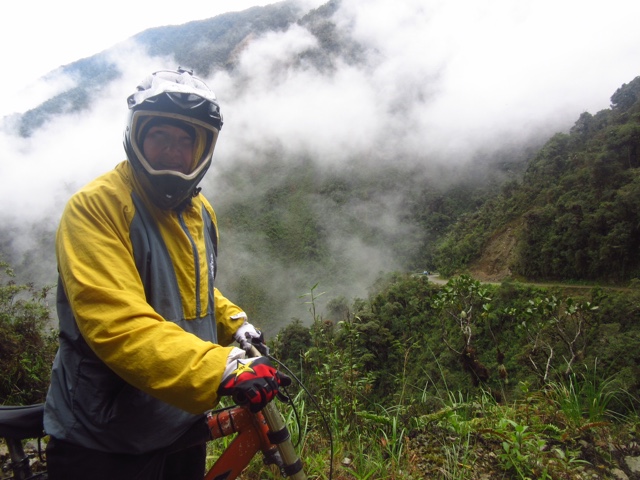 There is a sharp drop off from the road in a lot of places.  The road is really narrow so it's easy to see how accidents could happen- 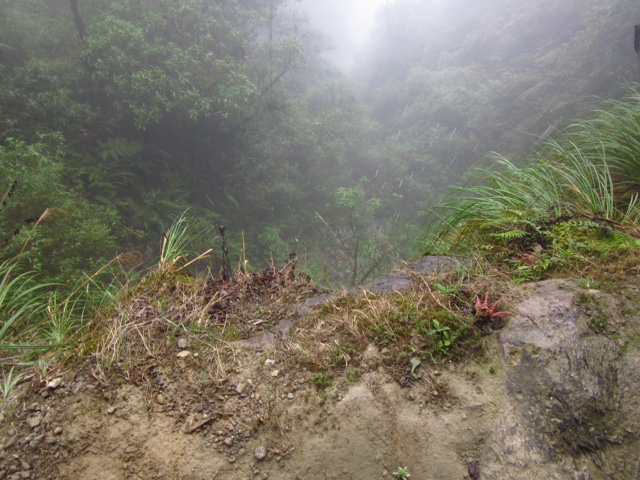 The van followed me because I was the last person.  A guide also followed me and asked me one time if I biked!  I started laughing and said that yes, I motor biked and bicycled on flat pavement, not rocks- 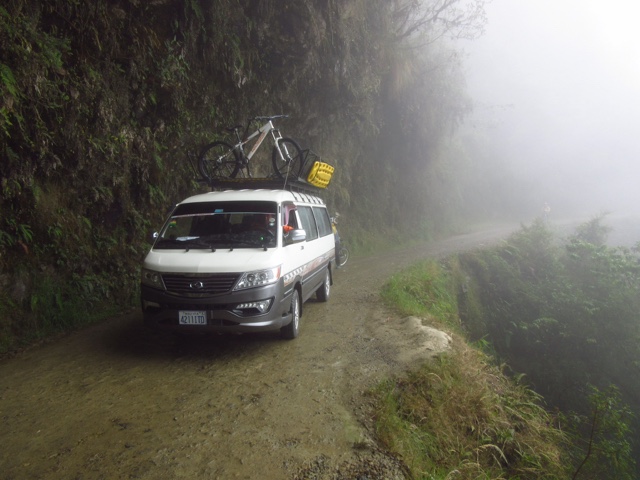 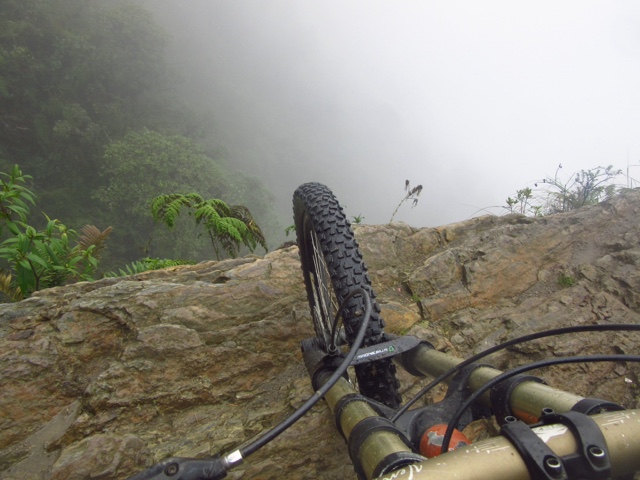 We cycled down into the jungle.  The views were great and it warmed up so much- 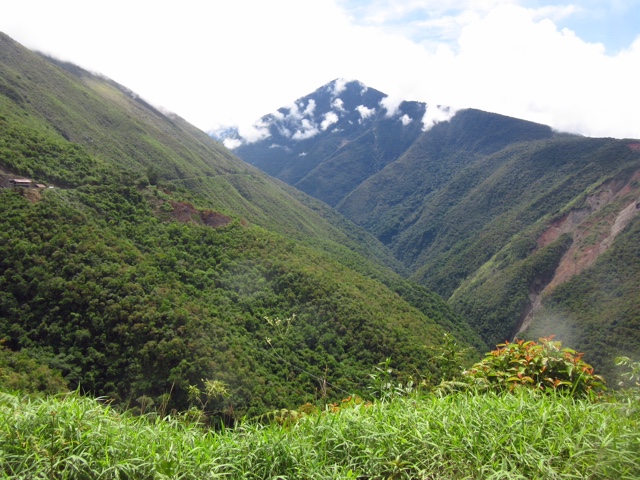 I was able to get undressed- 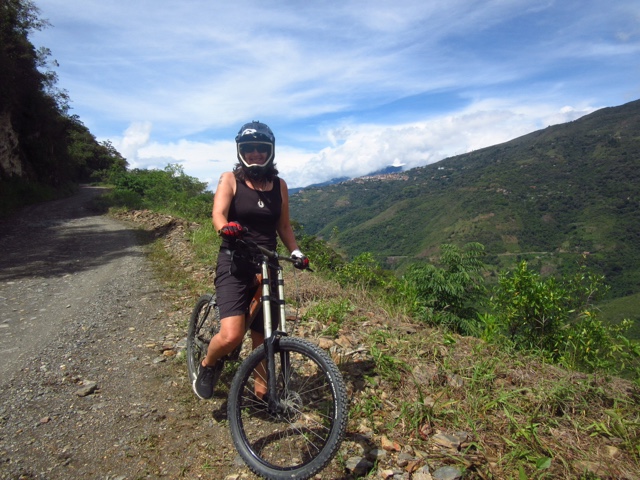 They really hype it up.  A few of our group went with a company called Gravity and paid $125 US.  I went with a company we found just down the street for $74 Canadian.  That's quite a difference for the same thing.  I'd rate my experience 6/10.  The scenery was nice but it wasn't anything we haven't seen in the truck.  I'm not an adrenaline junkie so maybe that's the difference- 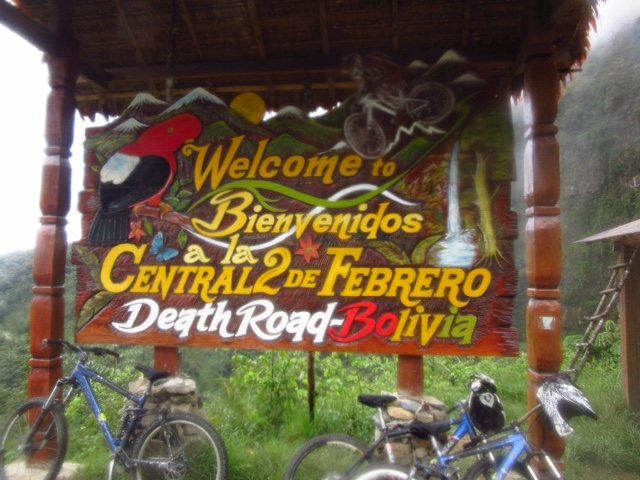 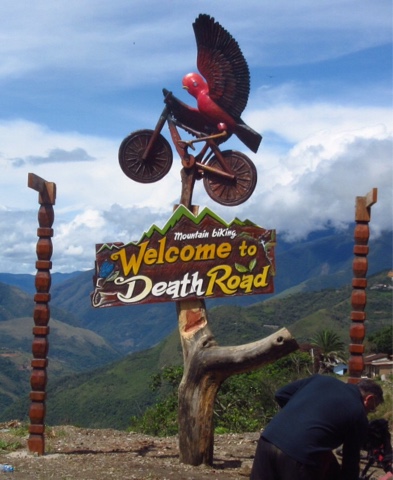 Once finished, I celebrated with a gigantic beer, then we went to a hotel for another buffet - they are generally horrible: rice, spaghetti, fries - carbs, carbs, carbs- 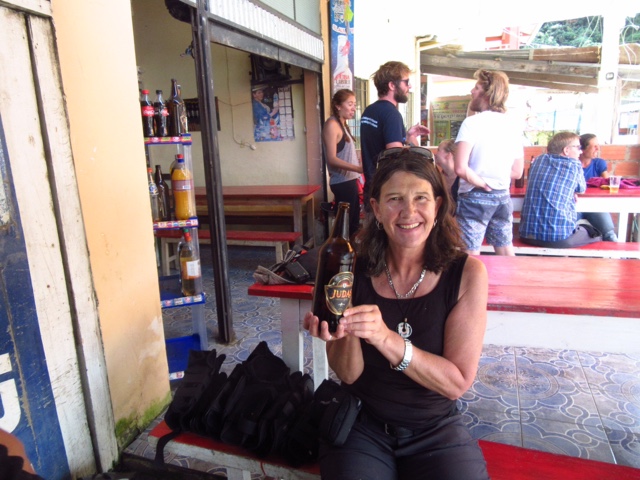 It took 3 hours to come home in the rain.  The van's defrost either doesn't work or the guides don't know how to use it because they wipe the fog off the windows and keep their windows open.  It was hard to see the edges of the road in a lot of places and our driver was very cautious which was a good thing.
We're leaving at 7 tomorrow for Uyuni, the salt flats.
P.S.  My two favourite people- 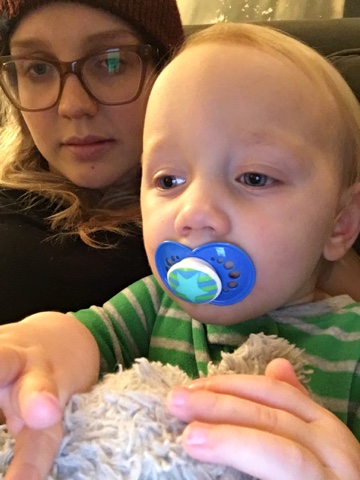