Cusco, or Costco means "centre of the universe!"  Isn't that interesting considering the market share and popularity of the store?
The Incas only reigned from 1180 - 1533 yet everything here is Inca.  I think it's a marketing trap!
Inca means 'God King", someone who is half human, half God like.  The Incas only had one dynasty and 13 Gods.  When the Spaniards showed up in 1533, there were only 178 of them!  Luckily for them they came during an Inca Civil war when 2 brothers were fighting against each other.  One brother was from Cusco, the other from Quito.  The Spanish easily conquered.  But not only did they bring horses and cannons, but disease.
Since the Inca empire in 1180, there have only been 113 Peruvian kings.
Cusco's historical center is small and lovely.  Construction of the Catedral was started in 1559 and took almost a century.  It is in gothic Renaissance style.  The bell weighs 5980 kg and measures 2.15 m- 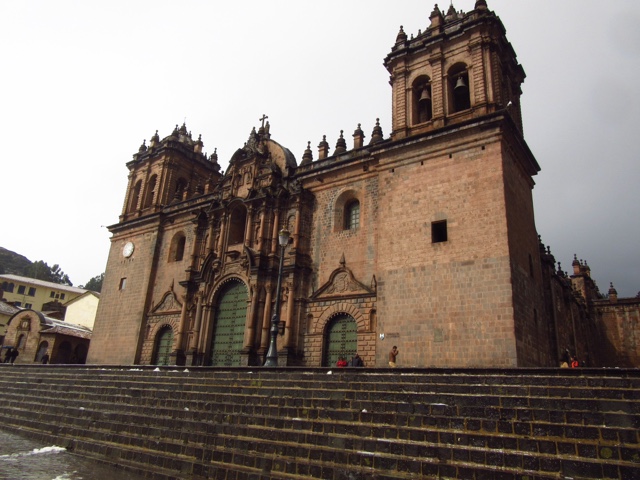 These stone walls are pre Inca, dating from 700 AD.  The stones were split and dragged using a rolling lever system.  They were cut to fit using copper saws.  A bamboo prototype was used to make sure the piece would fit.  Quartz was used to cut the stones.  When placing the rocks, they used wooden shims in between the rocks as well as seaweed as a lubricant.  They burned the shims once the rock was in place- 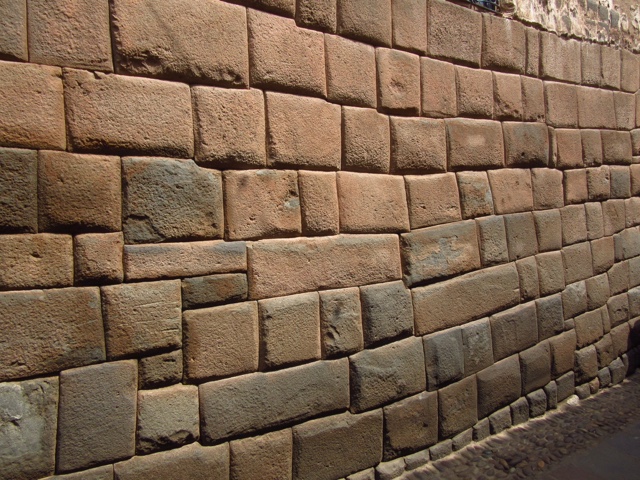 The knobs on some of the rocks aided in transportation.  The center rock is really cool as it has 12 sides! 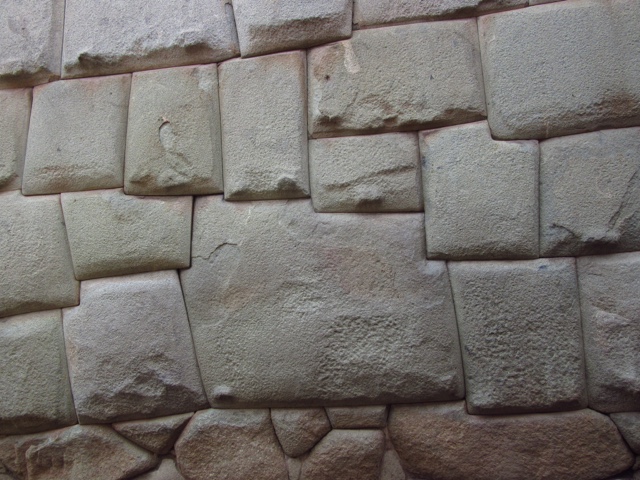 Iglesia San Francisco dates from the 16th and 17th centuries and was founded by the Franciscans.  There are 7000 people buried in the catacombs that aren't yet open to the public.
Cusco has 39 churches, all Catholic of course, and 25 have only 1 tower, thanks to earthquakes- 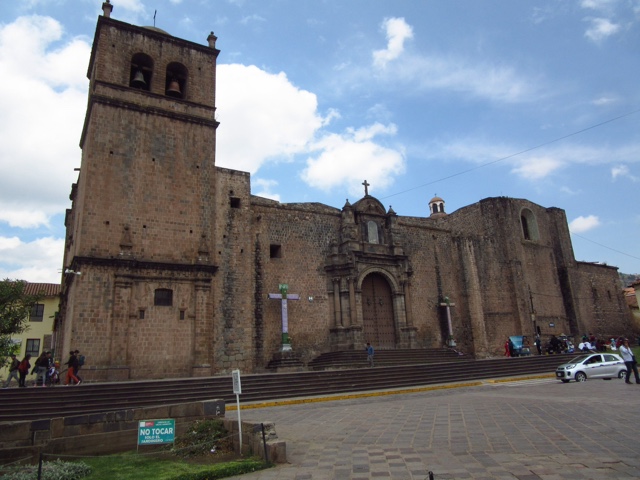 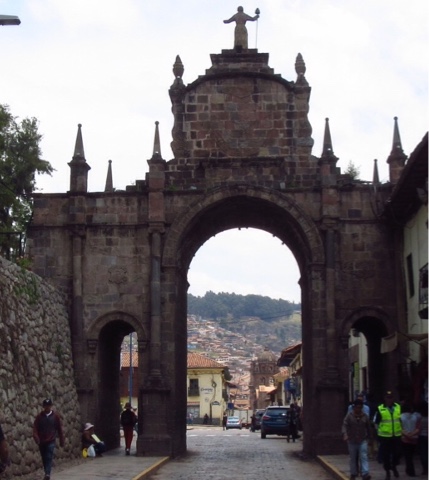 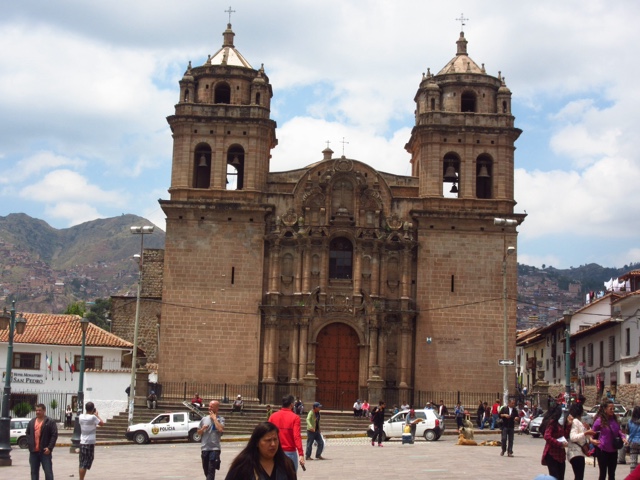 We visited the San Pedro Market.  It was awesome!  Churros are deep fried pieces of dough that are very sweet!  Churro in Spanish means good looking- 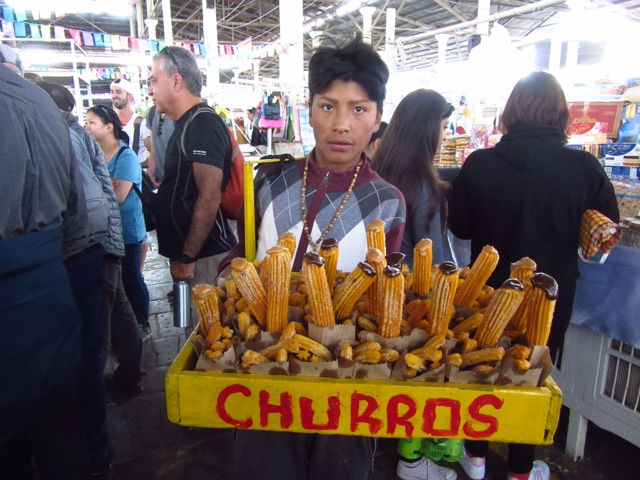 Alpaca and llama are dried and used in soup- 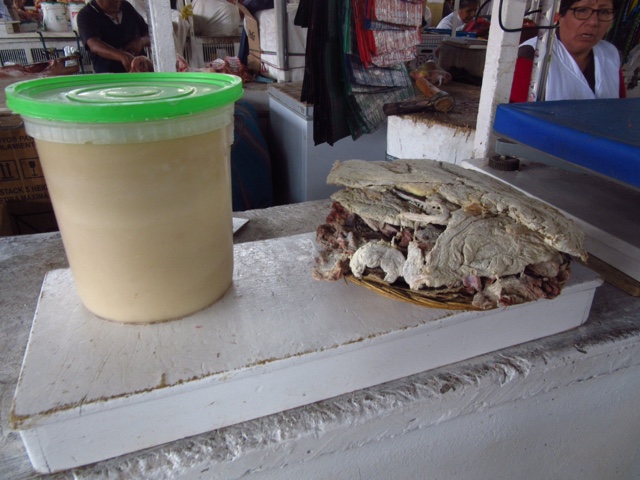 What a great fruit market! 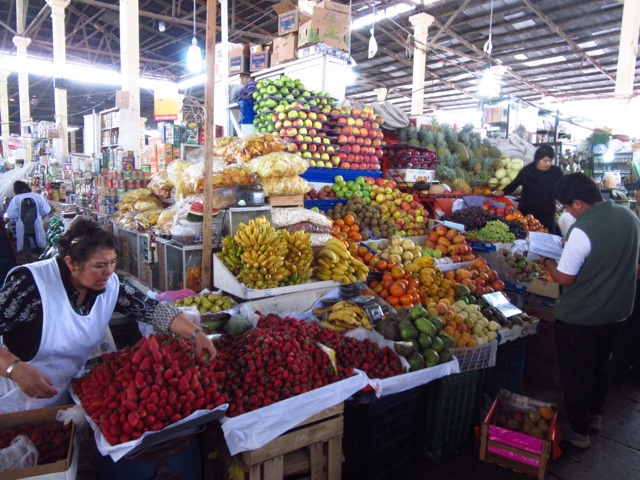 Penis sculptures date from 800 BC and represent fertility- Dehydrated potatoes must be rehydrated before being used in soups- 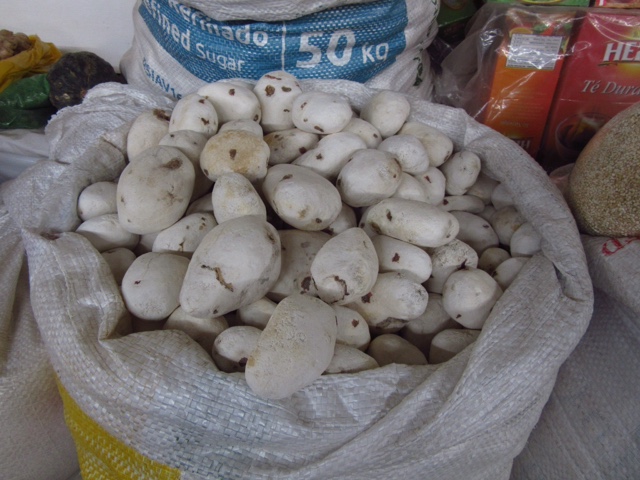 The poor and middle class live on the hills- 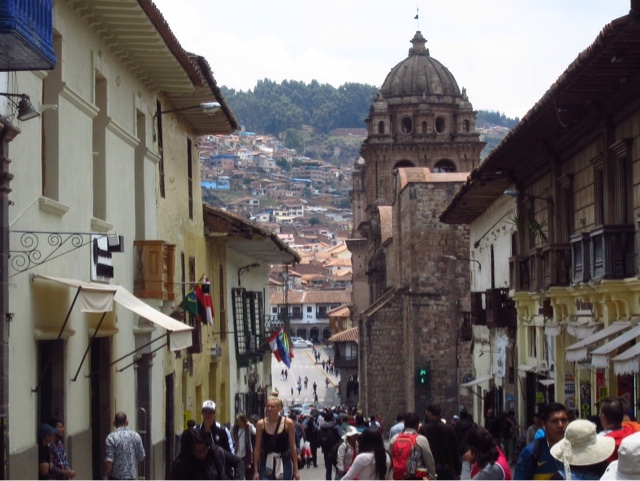 Incas ruled 4 provinces and 15 million people.  There was a road system running from north to south, east to west and the centre point was in Plaza des Armas in Cusco. The Incas weren't violent.  They persuaded other groups to join their civilization because of their social order.  They didn't use money but bartering and trade.  It's easy to see how a few violent Spaniards could take over- 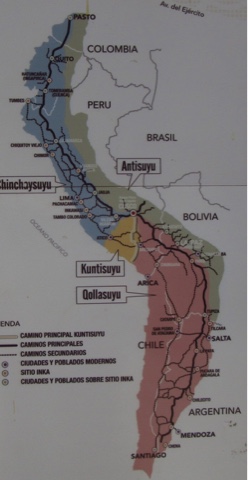 La Merced was built in baroque style- the Virgin Mary is visible on the outside.  The Incas believe that Pacha Mama, Mother Earth, was reincarnated into the Virgin Mary- 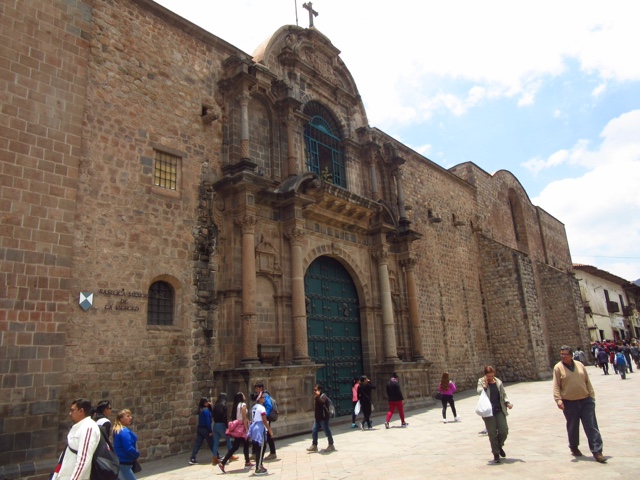 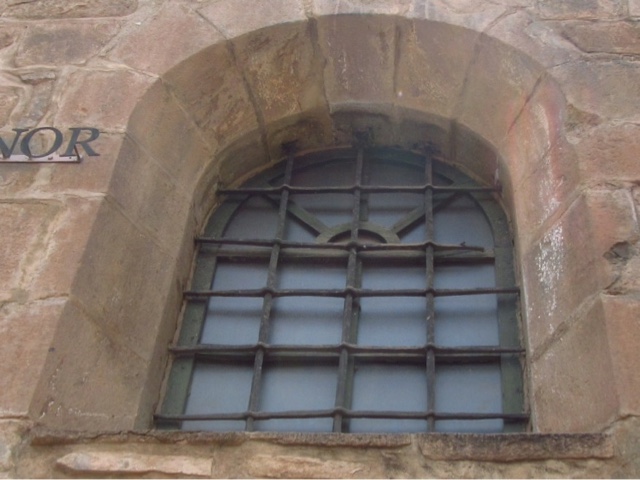 The Qorikancha Sun Temple is Mecca to the Incas.  The temple was walled and completely covered in gold- 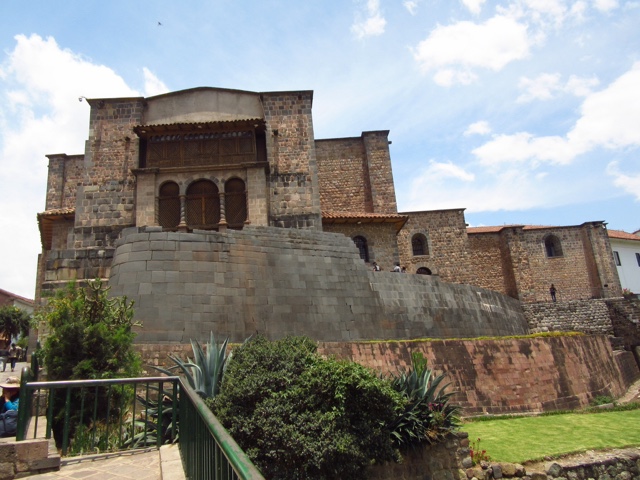 While I was having lunch, it started raining and hailing.  Sitting by myself at a 4 seat table, I invited 3 different people to sit with me.  The first woman was from Australia and had been working for 4 years at Whistler.  She and her English boyfriend are now travelling for 5 months in South America before returning to New Zealand.  The second woman was from New York and here for 2.5 weeks doing a yoga workshop with a woman from Canmore!  Her flight was cancelled last night because of the storm so she was hoping to get home today.  The third woman was from Holland.  She's been here for 8 weeks studying Spanish.  She suffered from salmonella for 2 weeks!  I had to keep ordering beer to pass the time and keep my spot at the table!
Water and hail completely flooded the streets and was up and over the sidewalks- 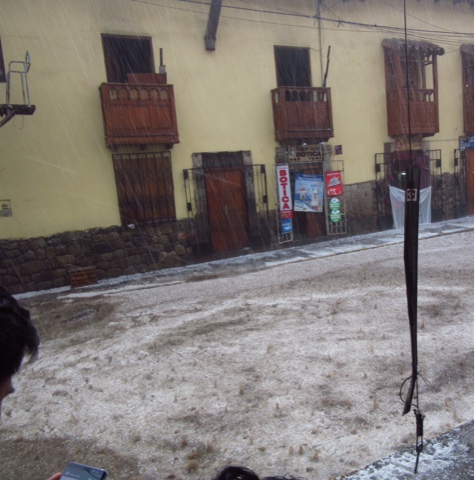 Is this Peruvian or what? 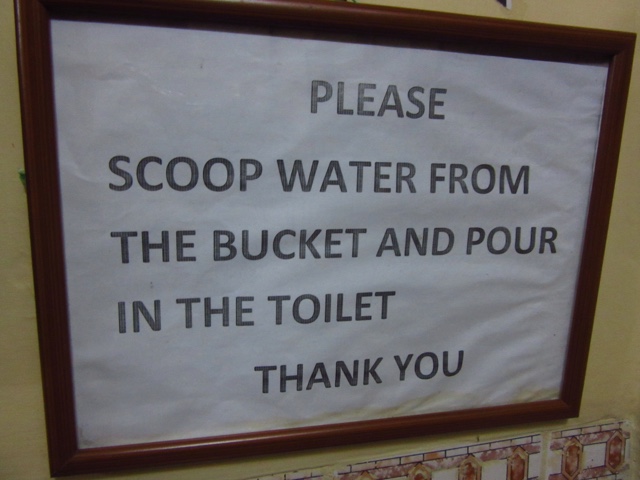 On my way home, hail was piled up on the sidewalks- 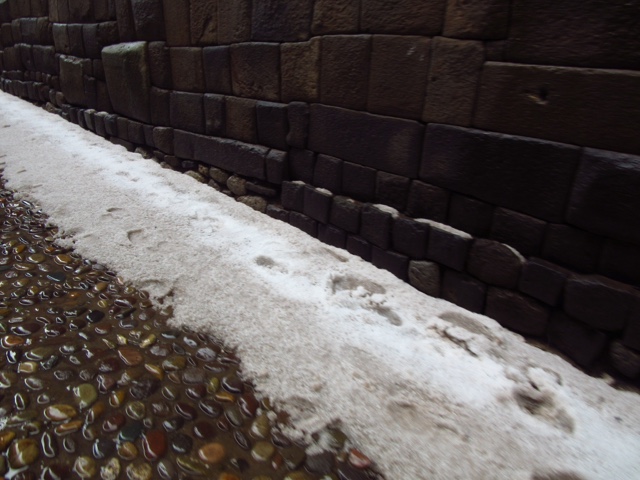 The Church of the Jesuit Brothers was built in 1540.  When the Jesuits arrived from Spain they only had 40 horses and 1 canon yet they defeated the Incas!  The Incas were just too peaceful for the Spanish- 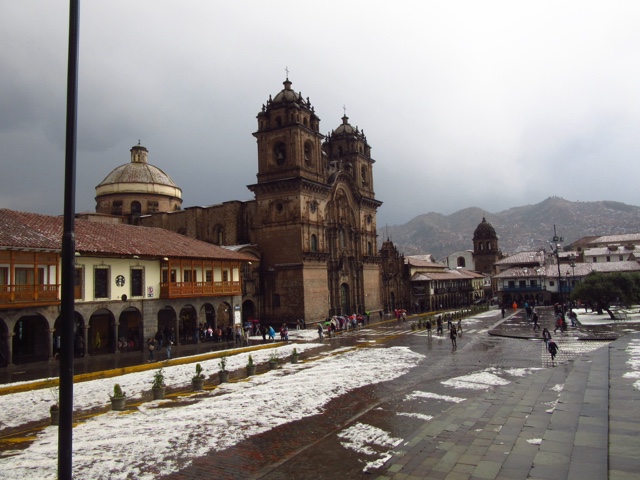 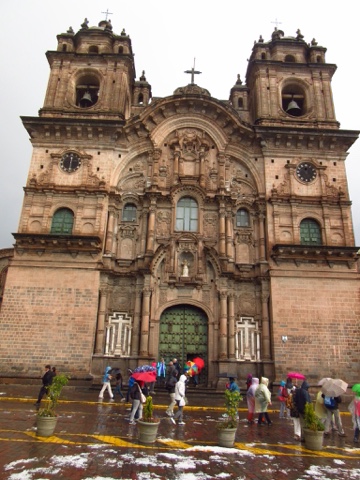 Looking forward to more exploring in Cusco tomorrow!
at November 18, 2017