5 of us walked about an hour to the Archaeological Museum in Plaza Bolivar.  I said I was 60!!! so I only had to pay $2 to get in.  It took me a couple of rooms until I recognized something that jarred my memory - I had been here before.  I don't know why my EF Peru trip is such a mystery.  It was only 3.5 years ago but my mind is completely blank about it.  Was I stressed out?  Was I disinterested?  Not sure but it's like I haven't been here before!
This picture is very difficult to make out but it is mummified bodies buried in a cavern.  The Paracas Necropolis people, before the Incas, used to wrap the corpse in numerous layers of cloth with jewels, food, trinkets and pottery, cover them with sand and bury them in tombs.  They would put a stick decorated with thread and feathers above the tomb so they could find it later.  This was done between 250 BC - 250 AC- 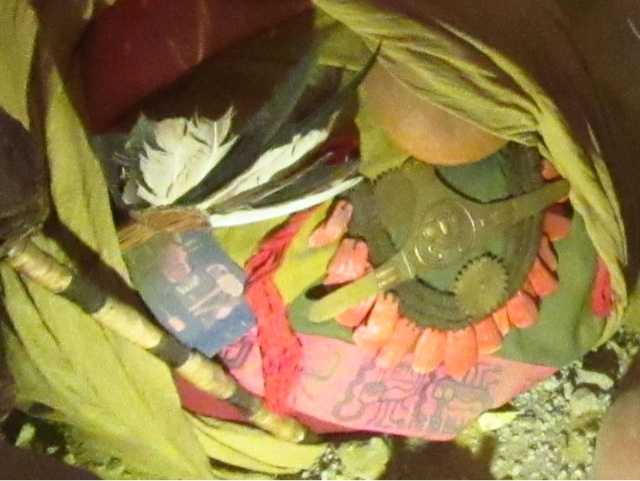 They also thought changing the shape of one's head was important.  They tied sashes and ropes in different positions on the head or used a circular belt and cotton pads- 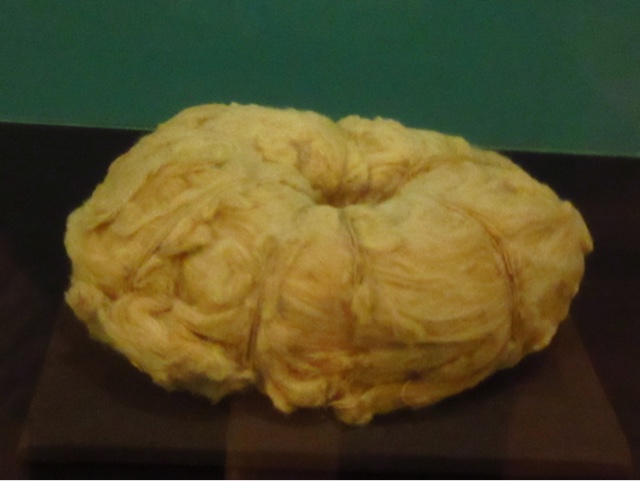 in the frontal and occipital areas.  This was most common among Paracas Necropolis people.  Here is one weird shaped head! Bilobular modelling was achieved by placing a cotton tablet on the occipital part of the head and wrapping it in a sash toward the forehead.  This resulted in a shortened skull- 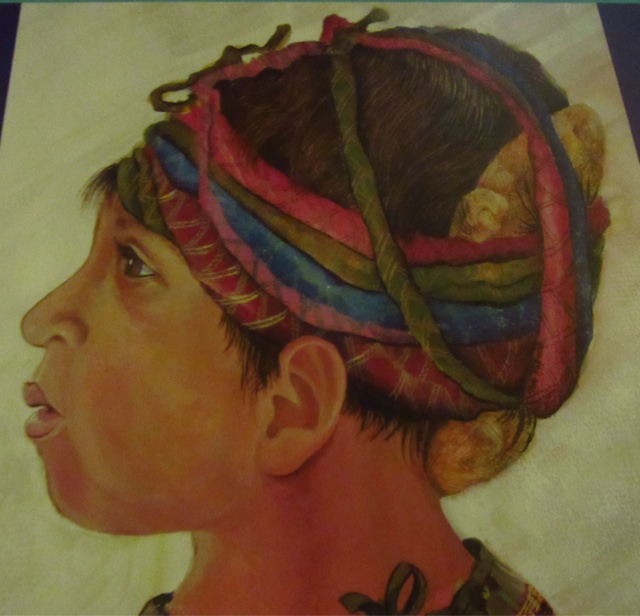 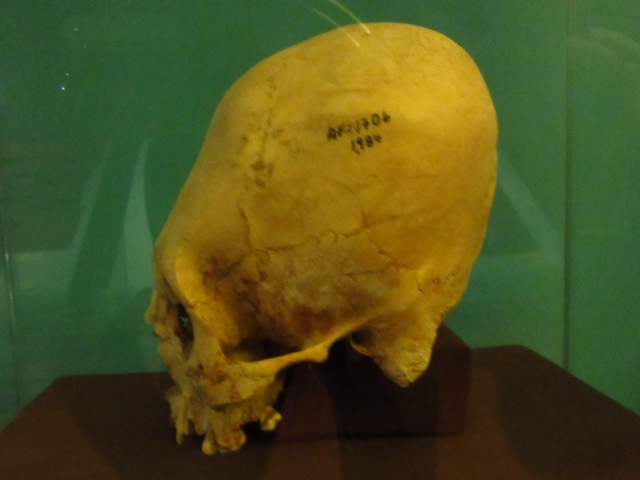 These cranial modifications were mainly done during childhood because bones are softer.
Look how the cotton pad was used to flatten the forehead- 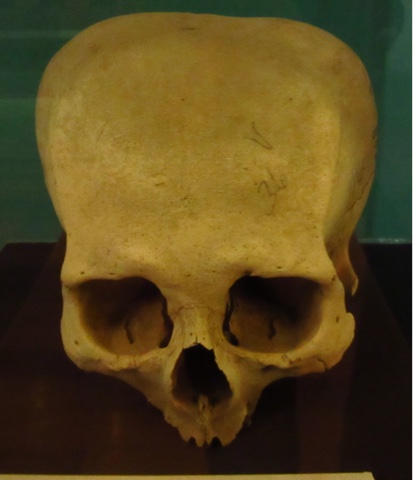 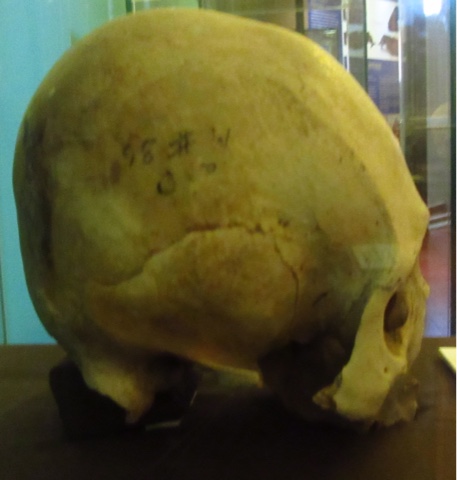 They also experimented with scraping the skull using obsidian blades- 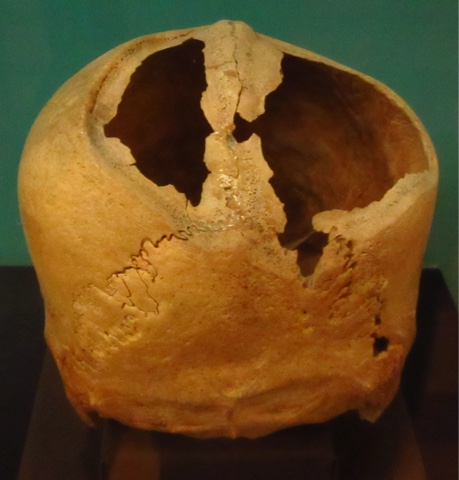 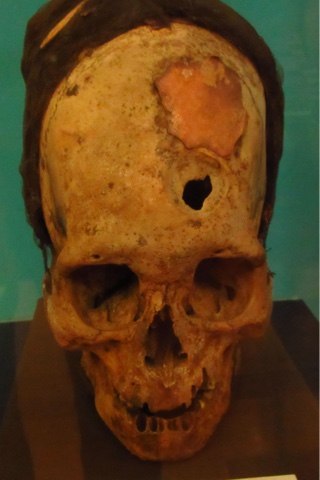 It was all pretty weird if you ask me.  There were a lot of pottery containers from different eras and decorated bowls.  There were quite a few dark paintings of important people, mainly men and then an explanation of the history of Peru after the Incas, when the Spaniards came and then finally independence.
Lunch was an awesome causa rellano.  It's mashed potato stuffed with vegetables and chicken= 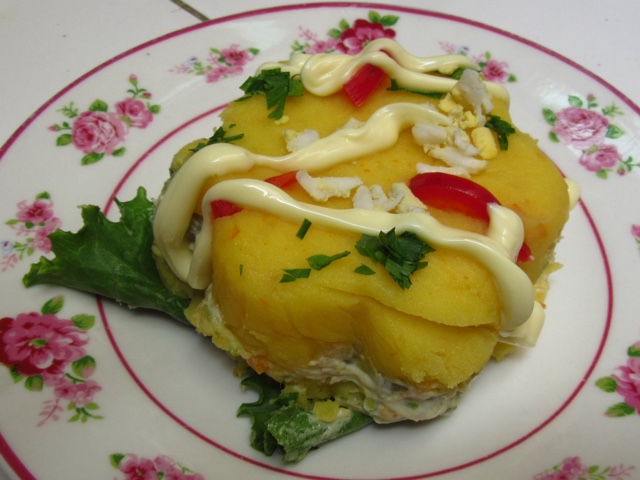 Also in the market- 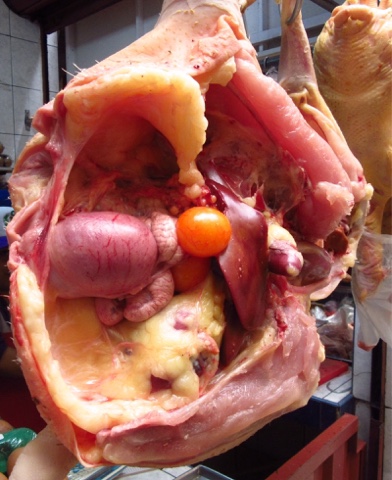 A dead, plucked but not cleaned chicken!
City and private buses, collectivos and taxis all compete for a person's sole.  The workers shout out where they are going or they have signs- 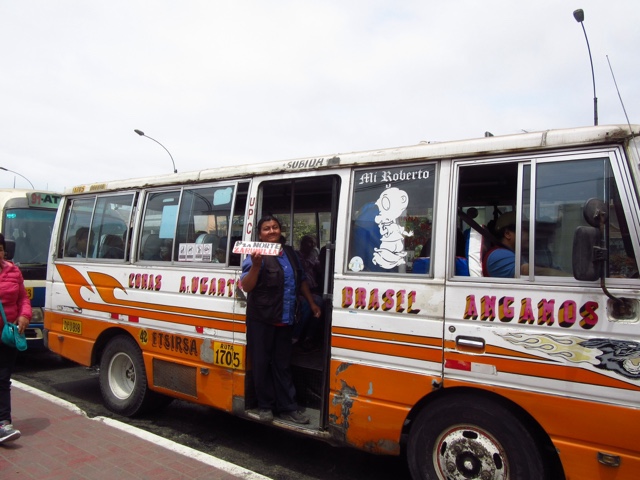 It costs 50 cents to ride the bus as far as you want to go.
I spent the afternoon in Miraflores, the richer and newer part of Lima.  First I visited souvenir stalls- 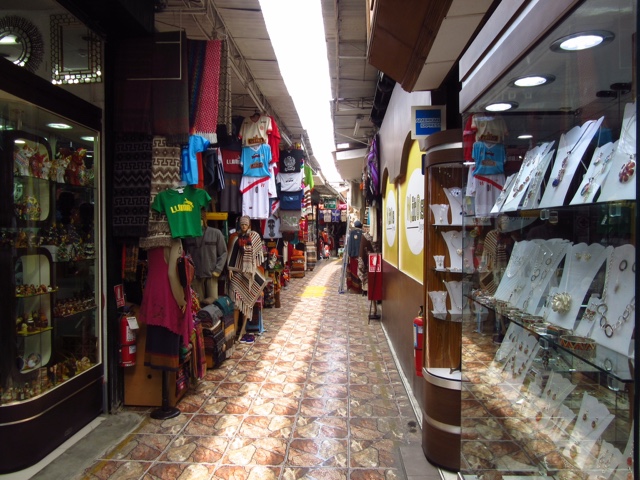 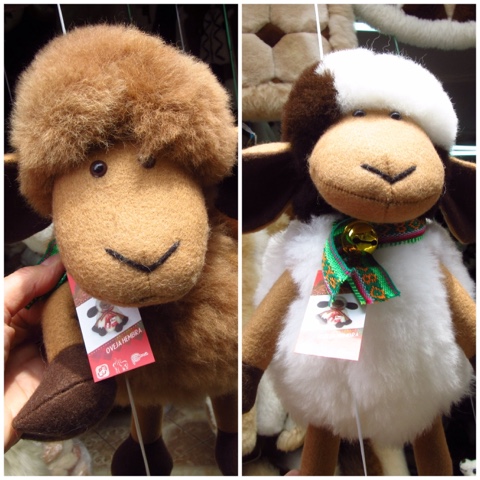 I had a drink at a great spot- 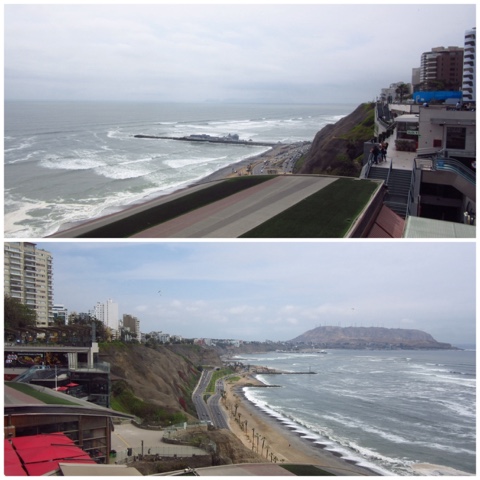 Later I went to the Museo de Arte de Lima.  There were many vessels- 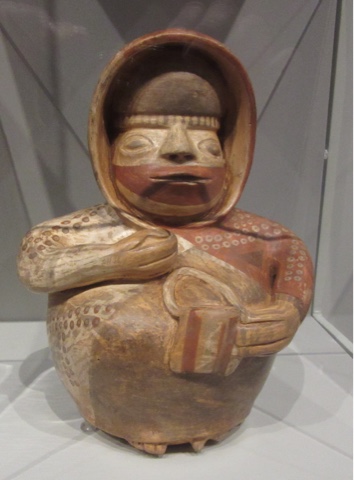 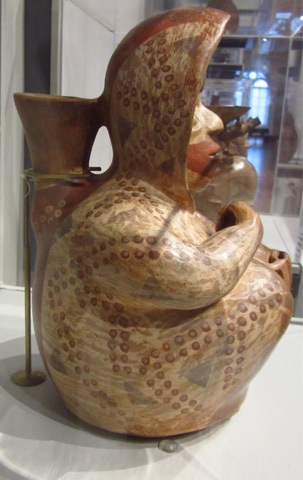 that were used during funeral services and to transport water and oil. These date from 200 B.C. 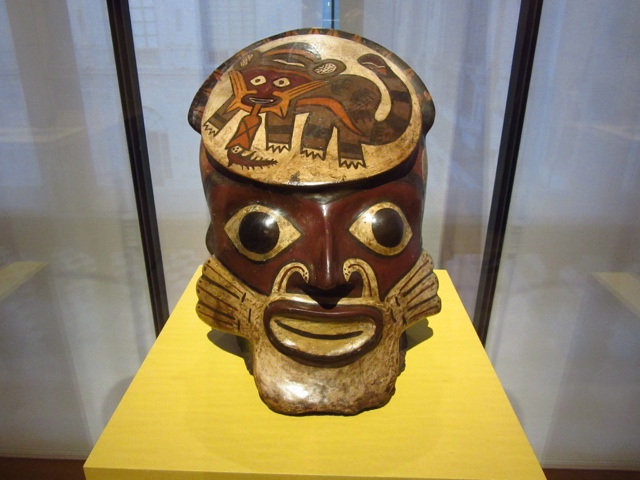 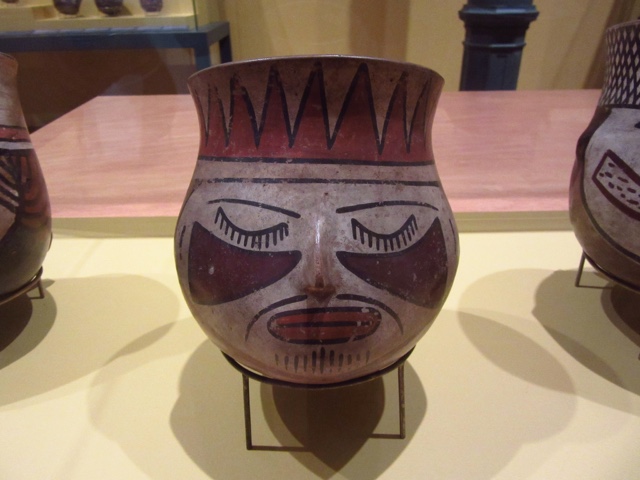 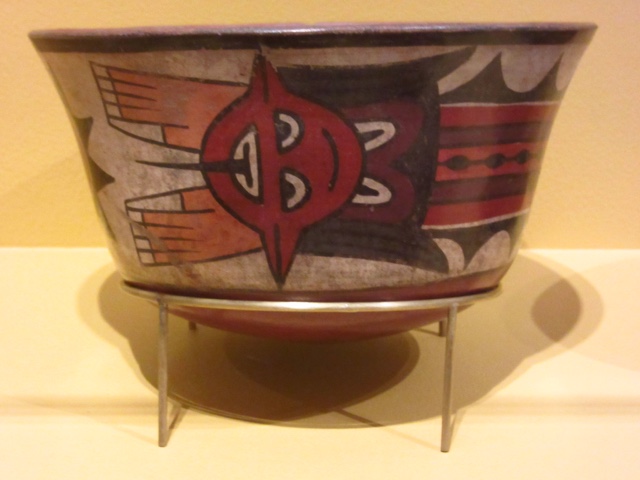 Then the Spanish came and changed everything- 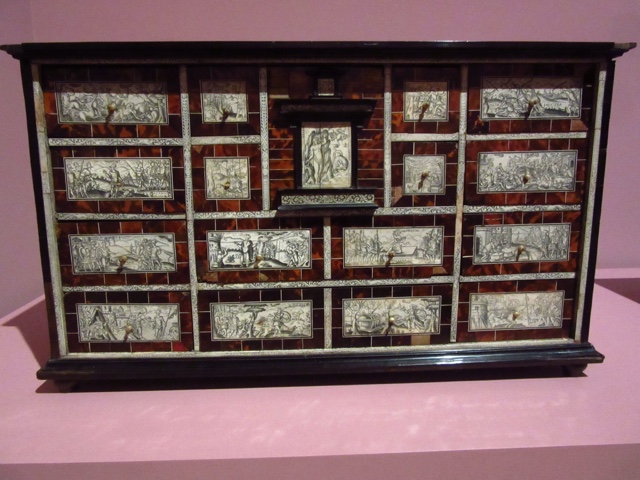 The cabinet is decorated with mythological scenes from 1670.
The Three Faced Trinity from 1750- 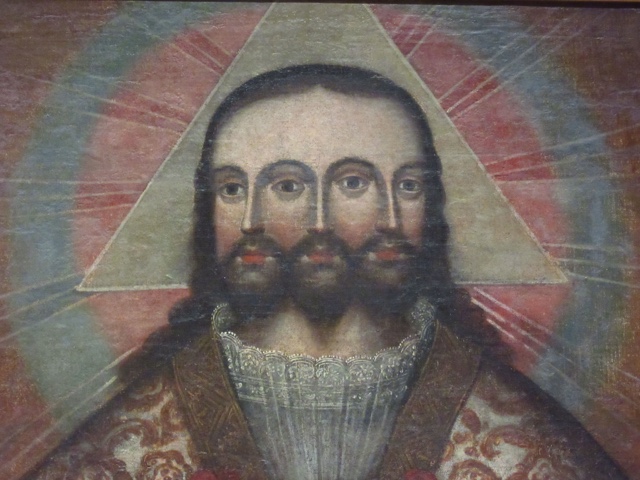 It's interesting to think about the 'white' influence on the 'natives'.  They have 300 years on we Canadians.  Today, the majority of Peruvians are indigenous and even though they are poor, they seem to be doing okay.  I wonder what Canada will be like in 300 years??
Tonight we went out with Bijan, celebrating the birth of his first grandchild!  Exciting times! 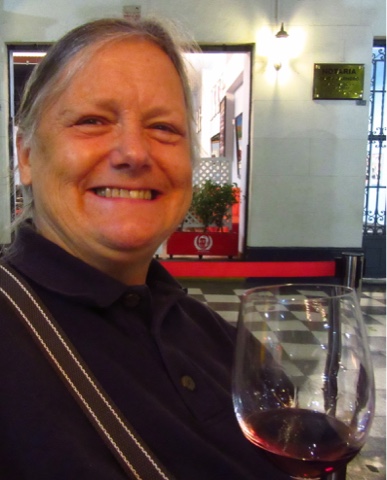 Wiebke Lehmann is from Schwentinental, Germany.  She's retired from the hospitality industry which means she worked in house keeping and was an assistant manager in a restaurant.  She has a 33 year old unmarried son who lives in Kiel.  Wiebke loves to travel so she's here for the adventure.
And.... 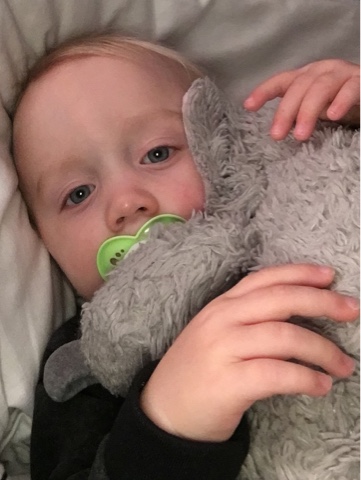 We're off to Huacachina tomorow to ride dune buggies in the sand!
at November 09, 2017