My first stop this morning- 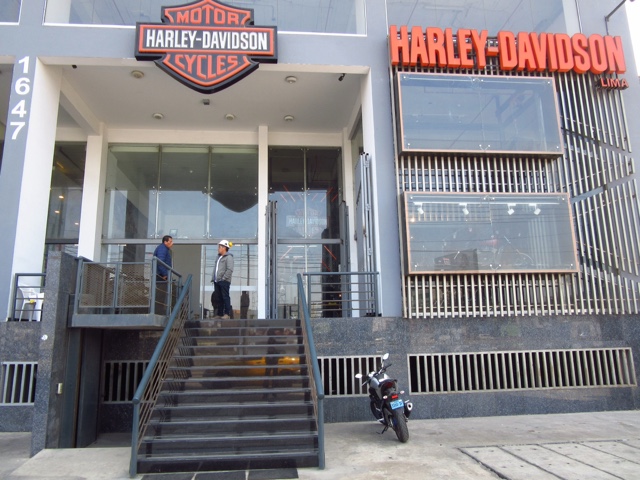 It's a very modern store with the most ladies clothing that I've ever seen in any HD store.  Yes, I bought a t-shirt- 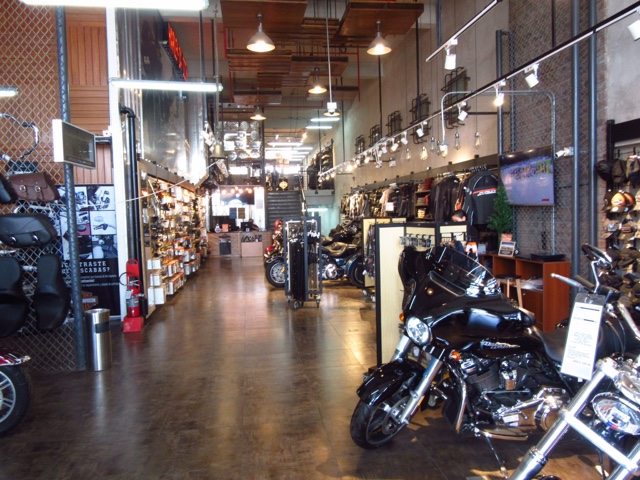 Breakfast was included but it was only bread and jam so I had an early lunch.  It was papa rellenos which is mashed potatoe stuffed with meat and fried to a crispy outside.  It's really good- 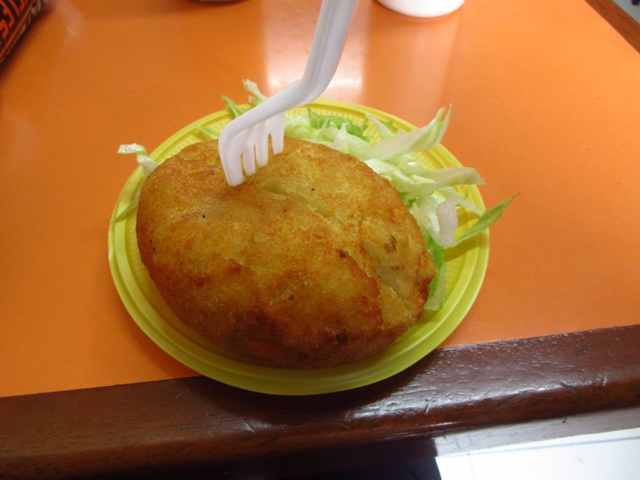 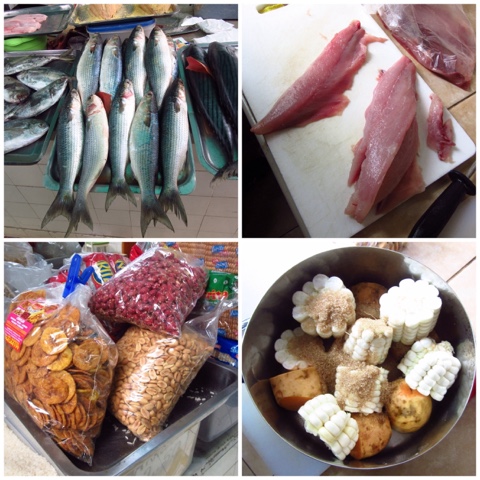 The ginger was peeled with a spoon - yes it worked!, then grated but only the juice was used.  The cilantro leaves were finely chopped, the seeds from the red chilis were removed and were finely chopped, the onion was sliced and soaked in water to take some of the bite away, the sweet potato and corn were cut in chunks and boiled, the base of the filets where there were a few bones was removed and then the fish was cut into fairly large chunks.  About 20 lemons, which looked like limes, were rolled on the counter to soften, then washed with soap to remove the oil on the outside, then squeezed.  The fish was 'cooked' for about 15 minutes in the lemon and ginger juice- 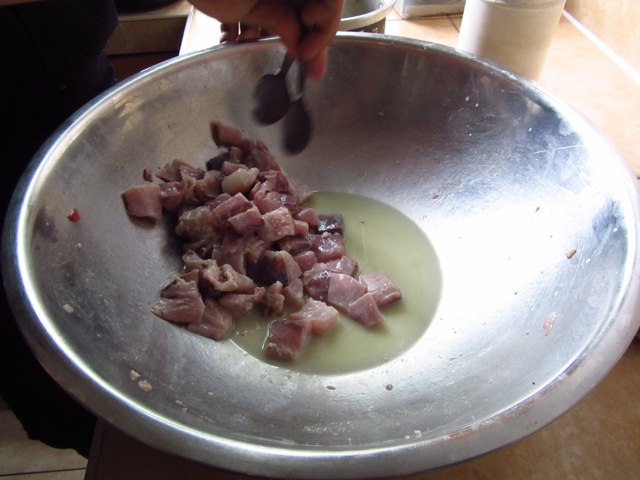 Garnish was seaweed and the plantain chips and corn kernels were used as decoration.  It was fabulous but it took a long time to prepare.  Fresh fish is a must so it might be hard to duplicate at home- 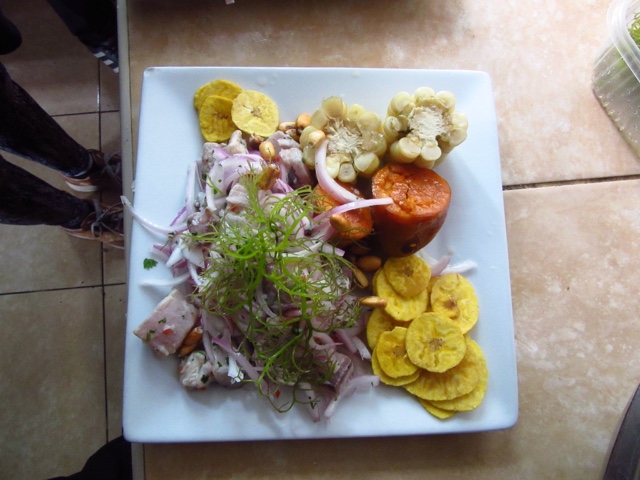 After the cooking class, it was time for a city walk.  As is often the case, I have a hard time understanding the guide and because I'm not an oral learner, I lose interest quickly and really can't recall much afterwards anyway.  The walk, except for the last part, was pretty much the same as what we did last night with Ninja, and unfortunately the sun was not shining.  I'm quite surprised how cold it is too.  For being so close to the equator, it's only 18 with very high humidity.  I wore my winter coat!
The General José de San Martin Plaza is surrounded by white buildings in every architectural style imaginable.  The "problem" in Lima in the 1600s was there were too many people with too much money and not enough to do, so, they went nuts with architecture, trying to outdo one another.  There are examples of French, Spanish, Moorish, Baroque, Classical, Neo-Classical.... You name it and it's here.  The Plaza was built in the early 20th century and lately the park has been restored and the buildings have been refurbished.  José de San Martin was the liberator of Peru and it is him sitting on the horse- 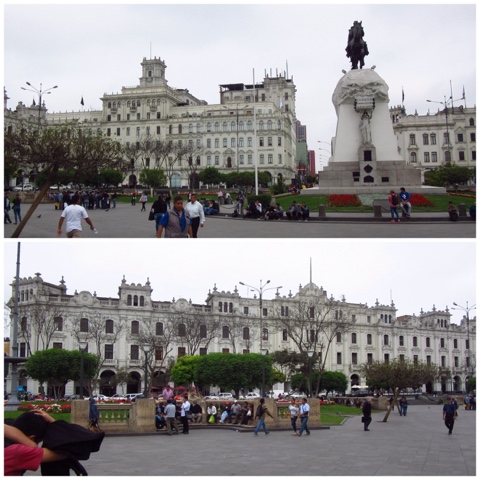 Most of the buildings are hostels, shops and restaurants/bars- 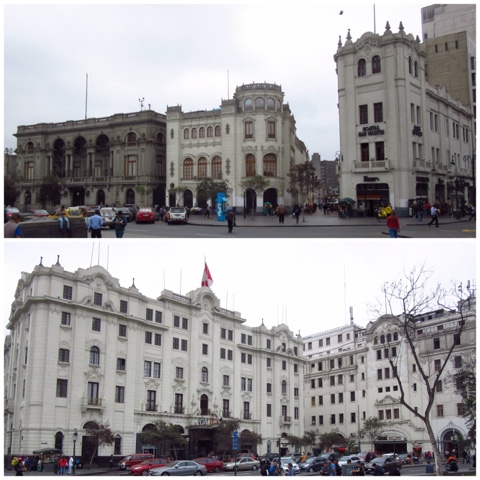 Iglesia de la Merced sits on the spot where the first Latin mass was held in 1534.  It's been destroyed many times but this structure dates from the 18th century.  The facade is granite and carved in the churrigueresque style - a very ornate style popular during the late Spanish baroque period- 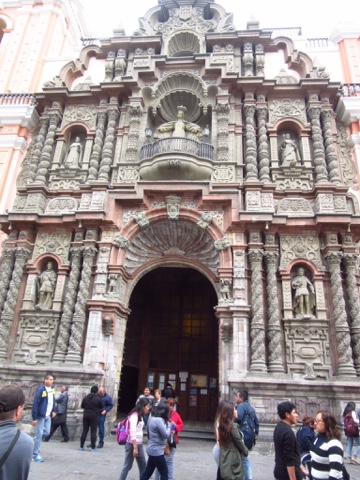 As the Catholics were trying to coerce the Incas to become Christian, they incorporated Inca symbols into the outside decoration of their churches to 'include' them and make them feel welcome- 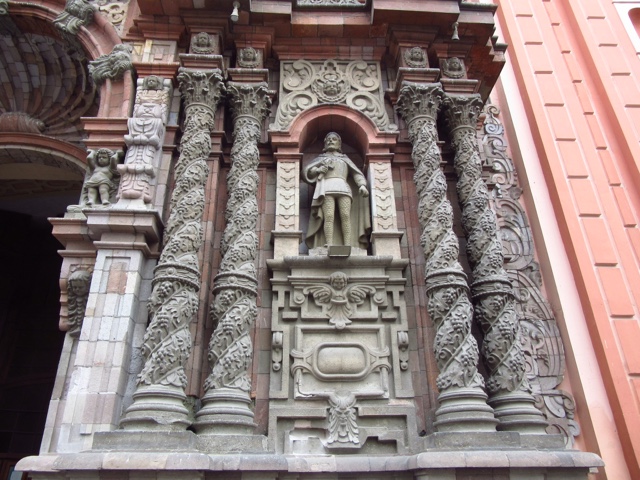 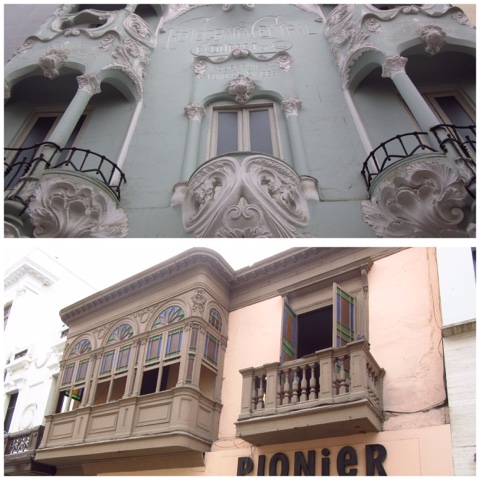 The Plaza de Armas was the heart of Lima in the 16th century.  The Catedral of Lima was last restored in 1940.  It's in neoclassical style- 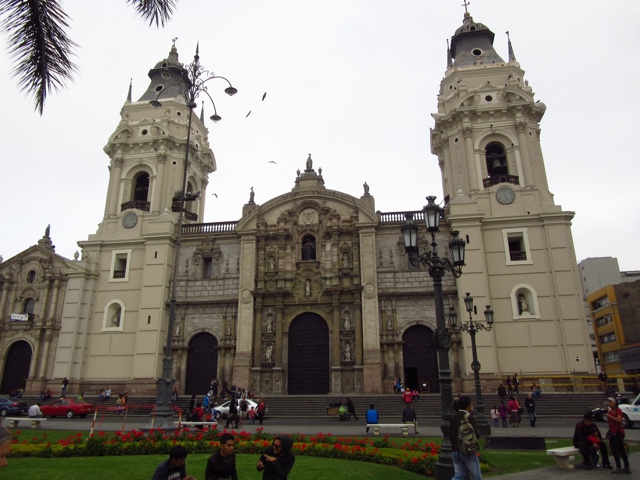 The yellow buildings all have moorish balconies and unfortunately are in disrepair. The owners are apparently hoping that because they are heritage sites, if they are left long enough, the outside can be left as is but the inside can be modernized.  They look pretty nice and I love the yellow color- 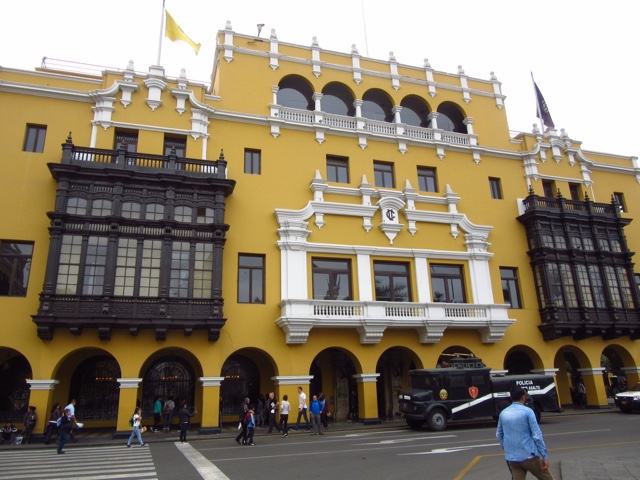 The bronze fountain was erected in 1650- 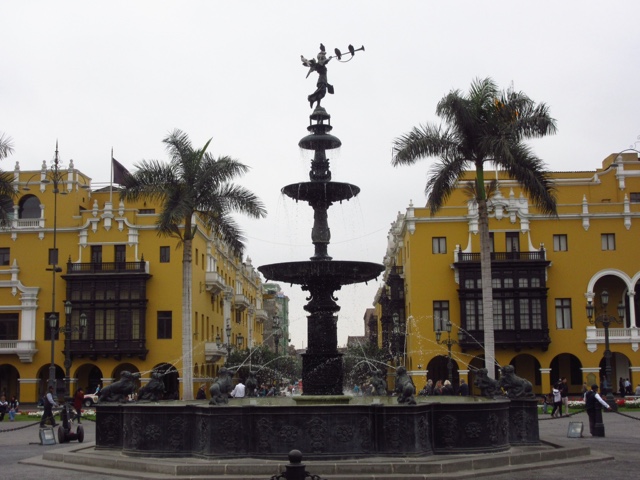 Police are everywhere, keeping us safe.  I think I'd rather be shot than attacked by one of these, the dogs I mean- 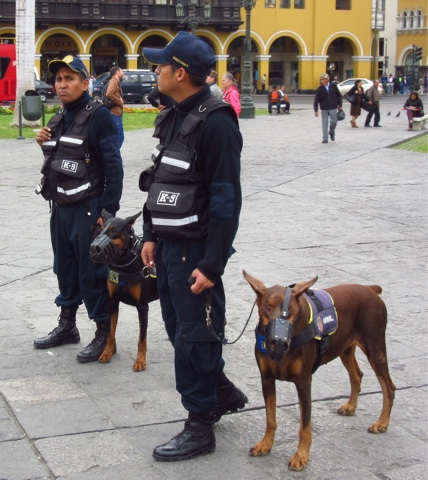 Changing of the guard took place in front of the Palacio de Gobierno.  It was built in 1937 in baroque style and is the residence of Peru's president- 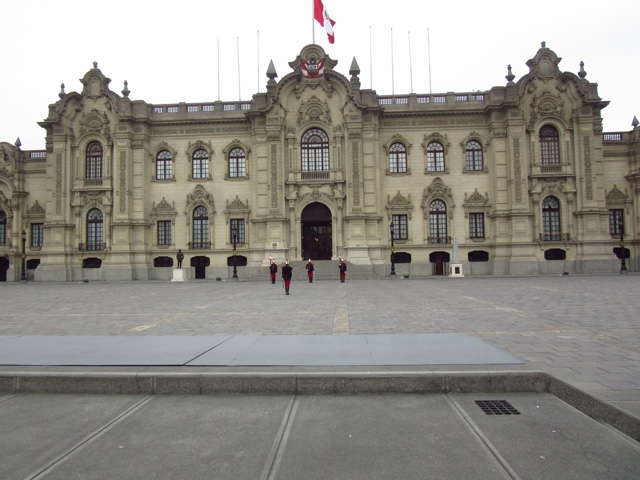 I hope they don't get paid for their synchronicity- 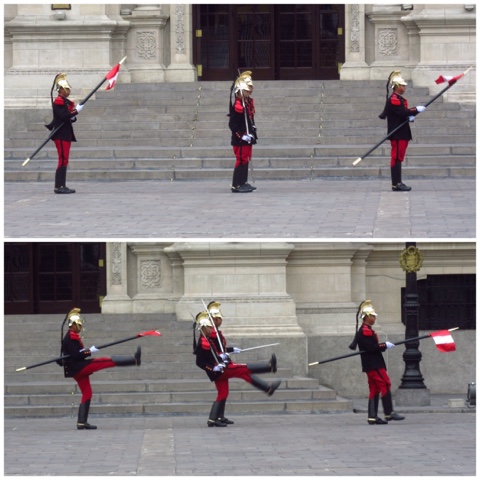 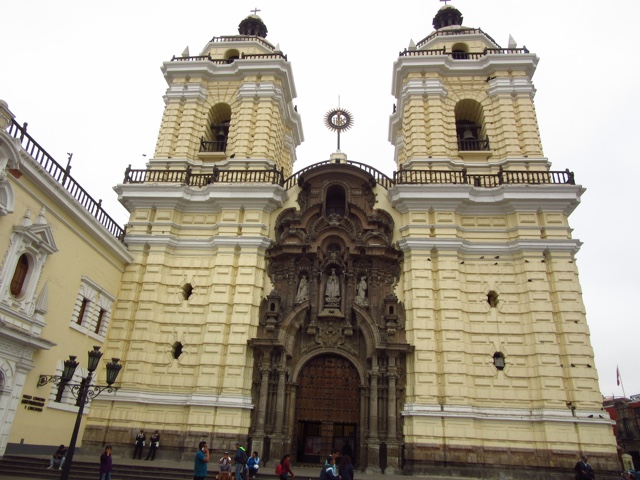 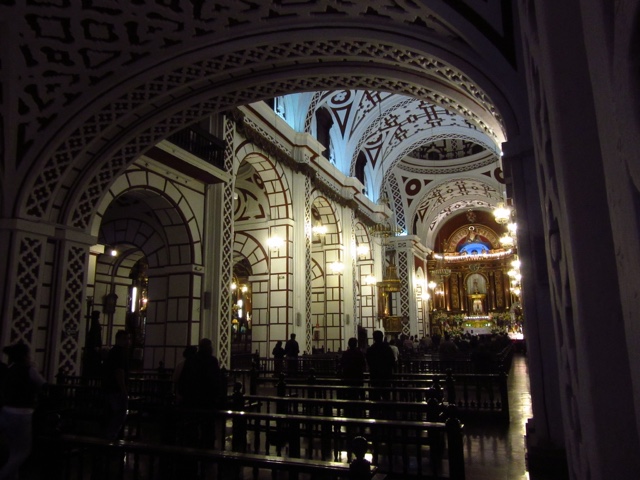 In the bowels of the church in the catacombs are over 70,000 bones and many more are still buried.  If you were Catholic, it used to be that you had to be buried in the floor of the church.  There are many femurs and skulls because apparently they take the longest to decompose.  Of course they're arranged in interesting ways today- 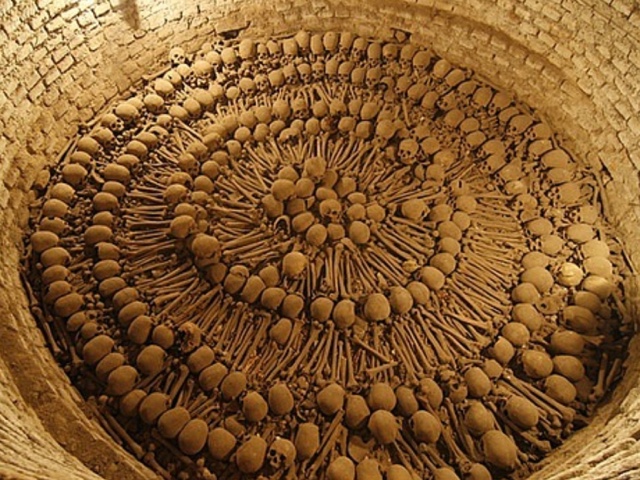 The library contains 25,000 very old books.  The four windows on the roof allow for light.  Candles were not allowed for fear the whole place would ignite- 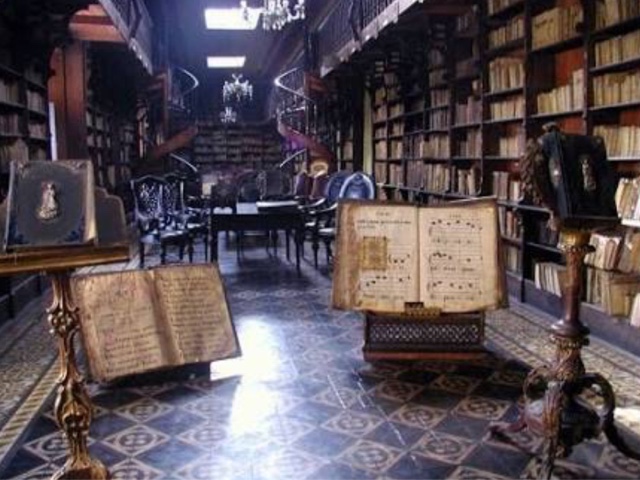 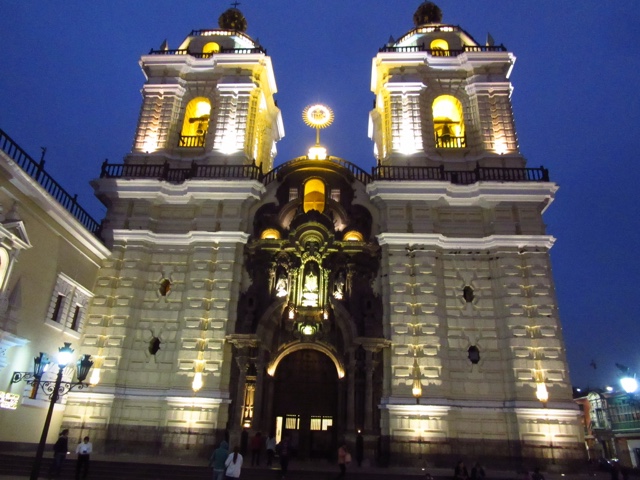 I had a very busy but good day.  I saw and did lots!
Jan Witvoet is 58 and from Meppel, The Netherlands.  He is a technical writer for ASML which makes machines that make computer chips.  He writes work instructions for maintenance  of the machines.  These machines cost up to 120 million dollars! and Samsung just ordered 10!  Jan isn't married but he has a girlfriend living in Japan.  This is Jan's third overland but tenth big trip.  We did the Madventure London to Sydney trip together in 2014.  Jan loves to travel and so overlanding allows him to see many countries in one trip. 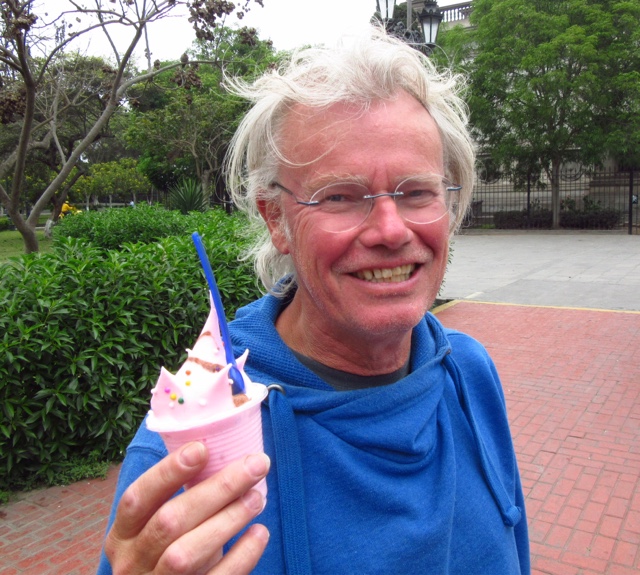 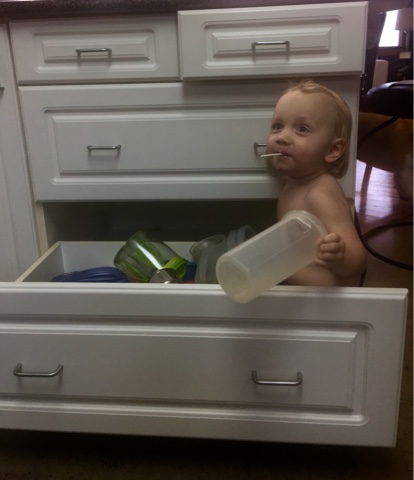 Looking forward to a museum visit tomorrow!
at November 08, 2017