Today was another early start- 5:30 breakfast! But look at the view- 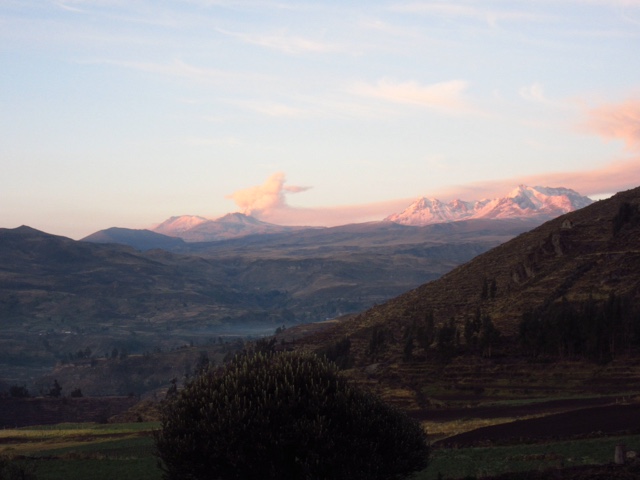 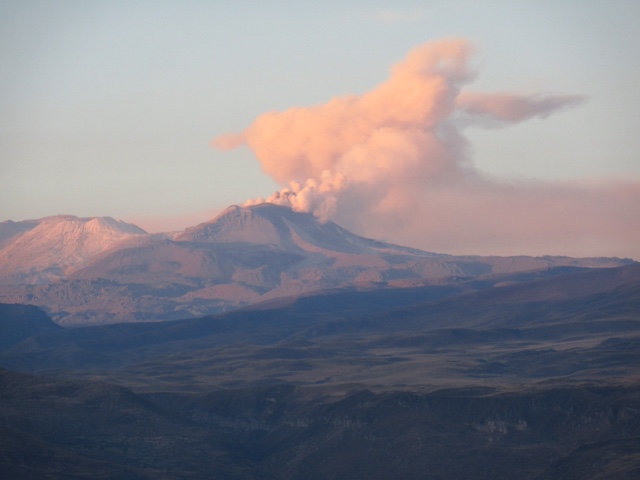 We drove 2 hours to meet the truck.  Along the way we saw a lot of wildlife.  The vizcacha is like a rabbit but has a long tail and hangs out in the rocks- 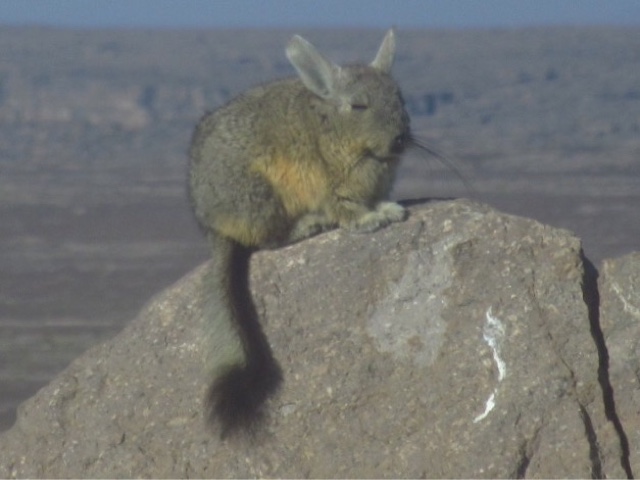 We were above the clouds at 4900 meters.  I felt pretty woozy- 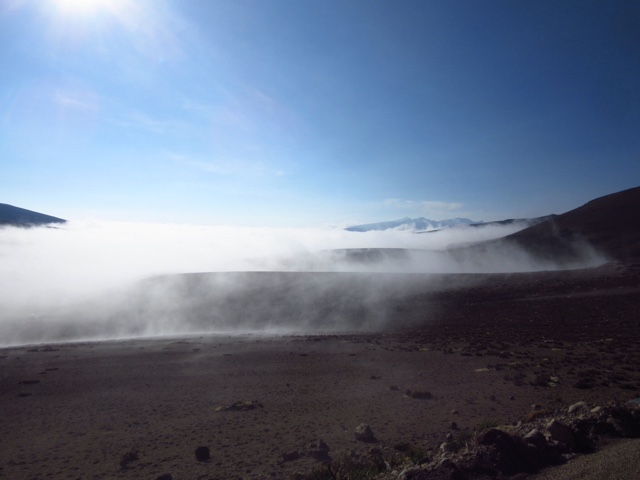 We also saw a herd of vecunas.  They're wild and endangered.  In 1970 there were only 500 but now there are over 12,000.  They're important because they're an ancestor of the alpaca and have the best hair.  They are captured, sheared and released.  They give only 1/4 kilo every 2 years.  We saw a group of seven.  There was an alpha male and the rest were females.  When a young male is 1.5 years old, he's fertile so is kicked out of the herd- 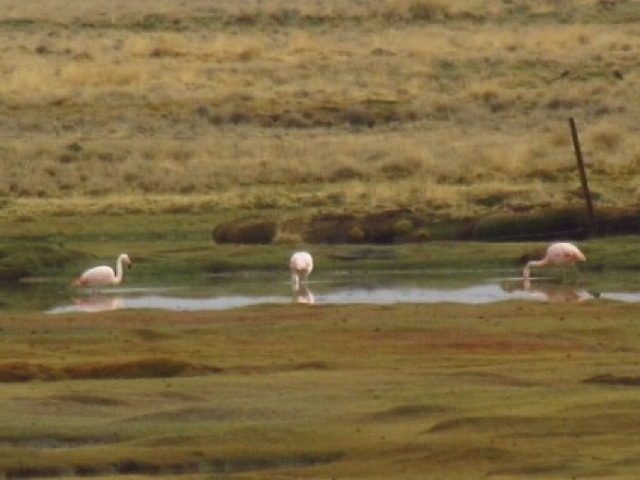 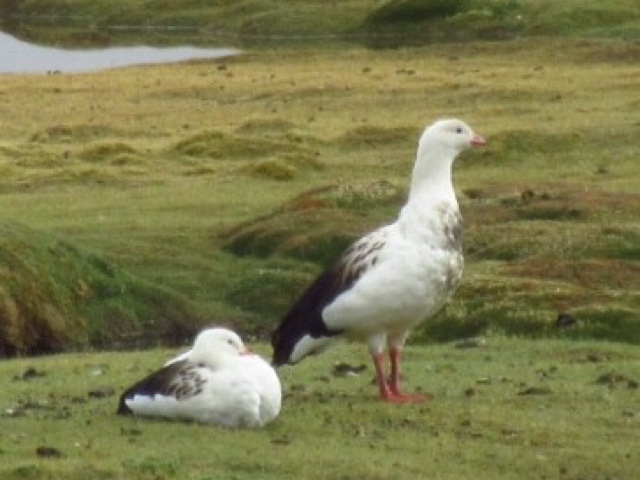 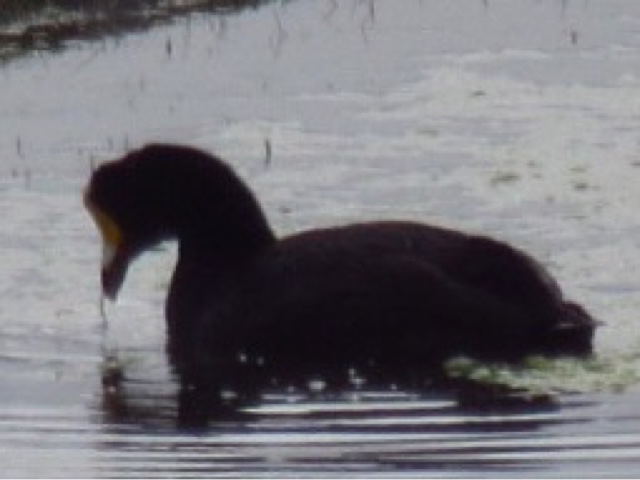 We saw a penned herd of alpacas and llamas.  They are released during the day but penned for protection at night.  There is a difference between the two:
Llamas have a long head like a camel face and long ears.  They are 1.8 meters tall and strong pack animals that can carry up to 30 kg.  They are skinnier and more square.  They are edible but the meat is tough.  Peruvians use their meat to make jerky and soup.  Their hair is thick and not used for clothes but rope.
Alpacas look rounder because they have more hair.  They are also shorter and look fatter only because of their hair.  Their back is bumpy so they're not a good pack animal nor are they very strong.  If they are butchered before 3 years old they are tender.  Their hair is beautiful and very soft.  They give 3 kilos/year.
If alpacas and llamas breed, they produce a huarizo. 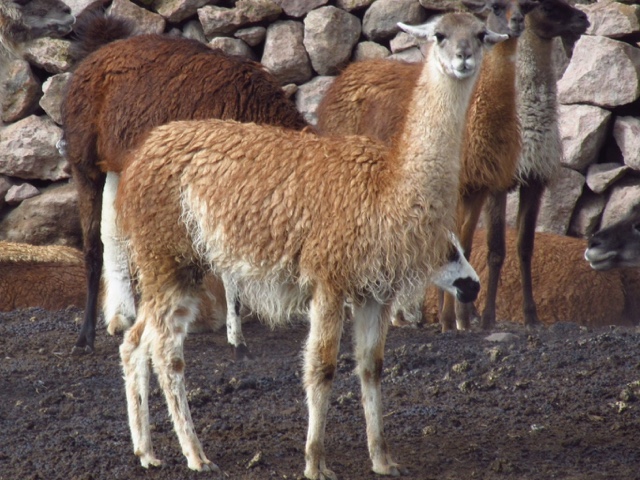 The yellow grass is very coarse and used to make rope and baskets.  It's also used to make adobe bricks.  It grows at 3500-4500 meters.  There's also a green Ichu grass that the animals eat.  They just nibble the tops because that part is tender- 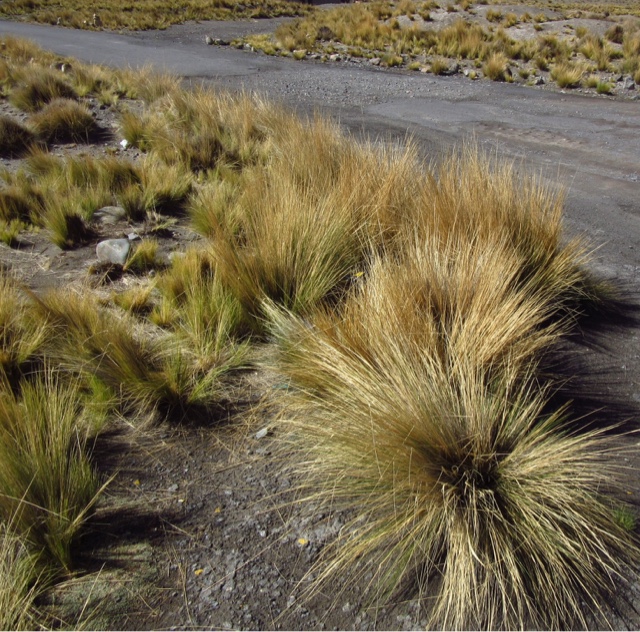 According to maps.me, we definitely came the long way around.  Not sure why but Jono is a good driver, has been here before and knows what he's doing.  It allowed us to pass by Lake Languilayo- 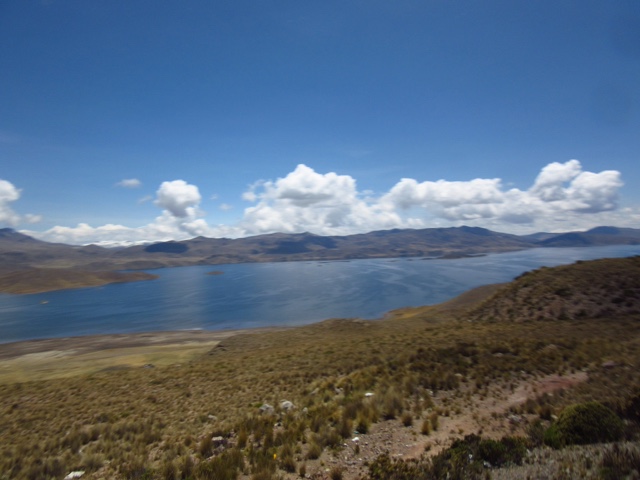 where there were numerous souvenir stalls- 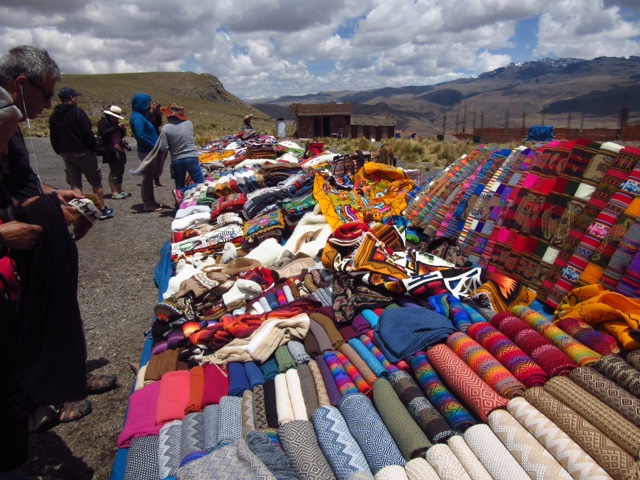 I tried on alpaca hats- 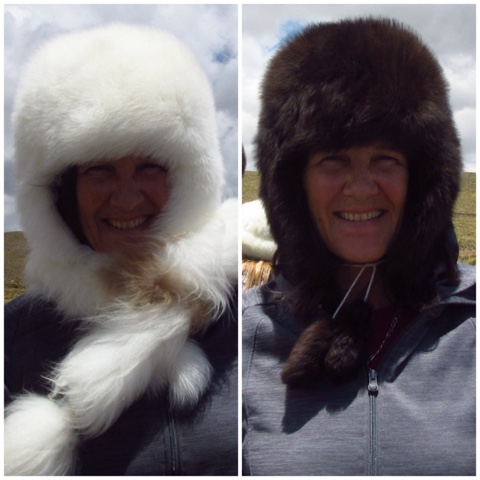 At one of our toilet stops, there was NO toilet paper in the stalls but there was a "bit" in the office- 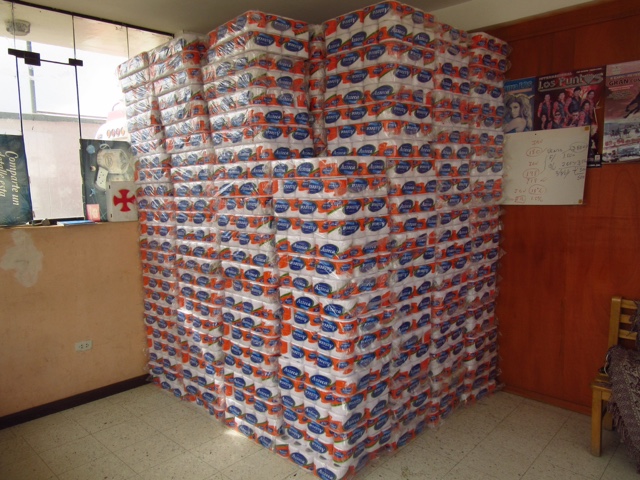 The landscape is very different.  There are grass covered hills with fewer rocks than we're used to- 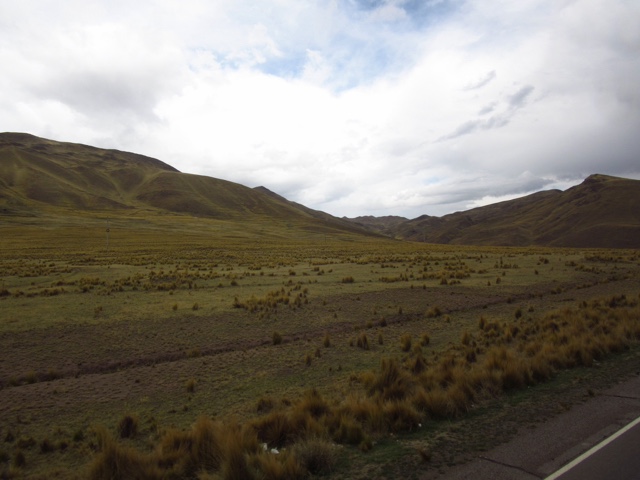 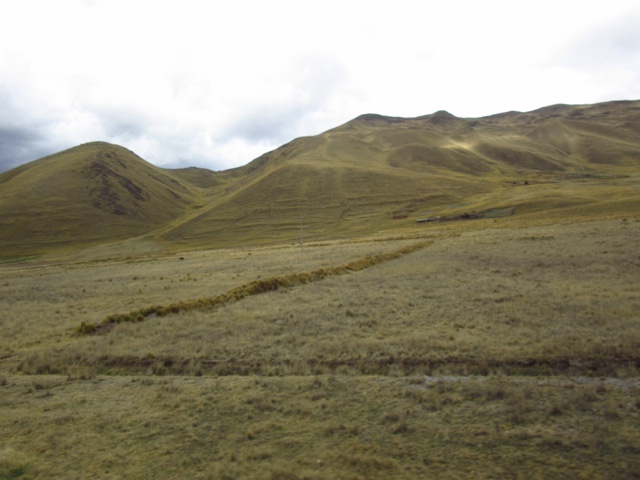 We drove through a couple hours of rain.  The windows on the truck leak so we have to watch our stuff on the floor.  We also had a bit of a lightning show- 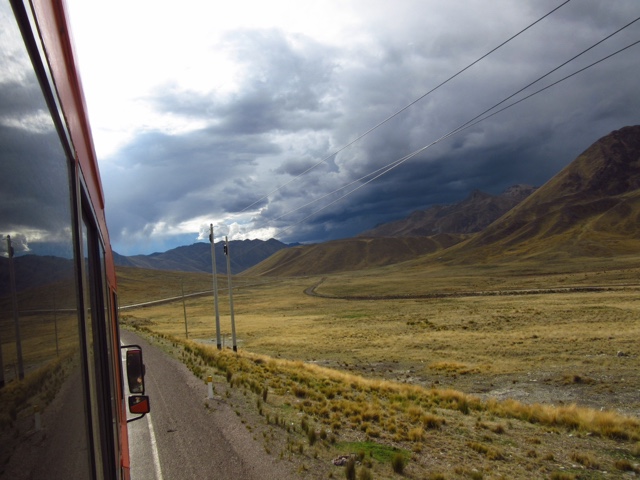 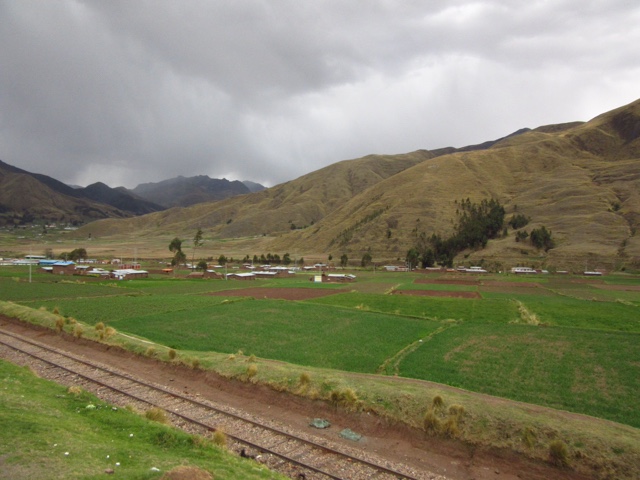 Annette Gribbin is 35 and from Sydney, Australia.  She works for a consulting company as part of the corporate citizenship team.  Everyone in the company gets one paid day per year to volunteer and Annette organizes that volunteering day.  She moved to the UK when she was 18 and lived there for 8 years.  She's also worked at a summer camp in the U.S.  This is her second overland.  Annette likes overlanding because you see a lot on a small budget.  She also likes driving through the countries rather than flying. 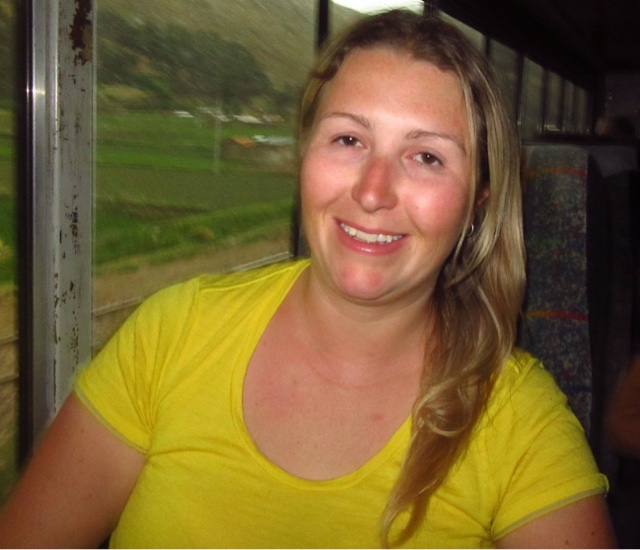