What a beautiful morning! I went for a long walk on the beach and the tide was the highest I’ve seen it.  I spoke with a worker who said it gets like that maybe four times a month.  One restaurant even had small sandbags out in front but it didn’t get quite that high.  It had also washed in tree logs and even an old tire.  I hate walking in the soft sand so try to stay close to the water where it’s more packed but it’s also slanted so that’s hard on the hips.  Even though I tried to jump out of the way, some of the quick waves still got me. Oh well, such first world problems. 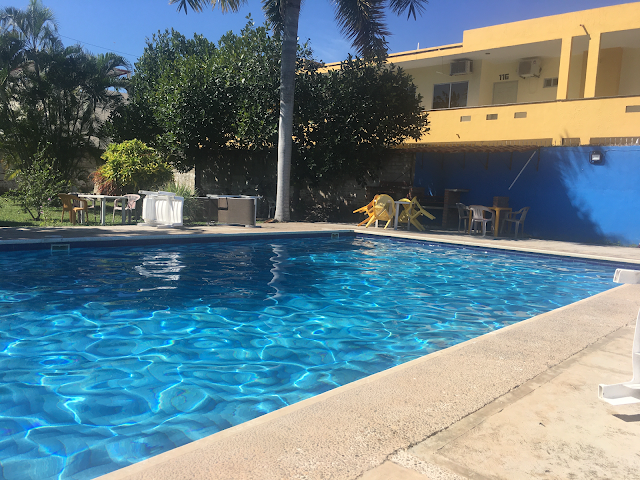 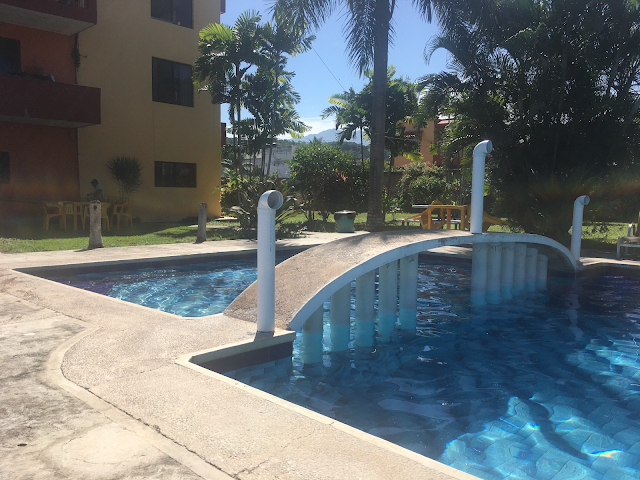 and wondered why I hadn’t been out here every day?  Oh ya, the weather sucked most of my time here.  Richard, one of the guests, pulled up in his quad.  He had a boat for years but a while ago traded it for a quad.  He must be close to 80 so this is easier.  He’d been on a mission to find his cousin who was also on a quad and bogged down somewhere.  There’s a huge garden beside the pool where he parks it.  My hosts were very gracious when I left giving me a baseball cap and a fridge magnet as souvenirs.

I walked, carrying my gigantic piece of estambre, wondering why I’d bought it - only because it measures 2 feet by 2 feet by 3 inches and weighs 9 pounds.  I waited on the corner of the highway for about 20 minutes and an almost new Pacifico pulled up.  It didn’t smell like the last one and had really plush seats.  I could barely fit through the door with my big backpack and the bus was almost full!  Luckily I found a spot close to the front and then proceeded to block the aisle with all my stuff!

It was a good nine days in Guayabitos.  It was nice to see people from home and have people to hang out with but I didn’t feel the sense of adventure there.  I think that’s what I crave when I travel - I mean, I love overlanding and that is one anxious moment after another.  Travelling alone also is like that, in a smaller way.  Maybe it’s good to have a balance.  I certainly had fun and enjoyed getting to know people from home in a different way.

Once in PV, I called an Uber to take me to FedEx where the staff was amazing.  After a few tries, they had the address right and I left my masterpiece there, hoping it ends up in Saskatoon at my parents in 5-6 working days.

Once in Zona Romantica, I found my place and much to my surprise I am a block down the street from my first apartment in November. I chuckled because I never knew the name of the street I was on then, I just got there by recognizing the buildings. Holy hell.  Well, the boys - it’s a gay couple that live here, were at the bank so I had to wait close to an hour on the sidewalk for them to come home.

My room is basic and the first room I rented, that was cancelled because of a family emergency, is also occupied!, by Daniel from Monterey who just booked two days ago.  I’ve already filed a complaint with AirBNB.

There’s such a different vibe here than everywhere I’ve been the last three months.  Leaving PV the first time, I was glad to be going - it feels like a mini Las Vegas - so busy, people here to party, tourists everywhere.  Coming today, it felt different - maybe because it is all so familiar and it may be that familiarity that comforts people and brings them back year after year.  I’ll see what it feels like tomorrow.
at February 07, 2020