The Temple of Karnak is dedicated to the Theban gods and pharaohs.  It's 2 km square and contains many temples, the largest being the Temple of Amun where he lived along with his wife Mut - the god of motherhood and their son Khonsu the moon god.  Most of what we saw today dates from 1570-1090 BC.
Amun Ra was the local god and the temple owned 421,000 head of cattle, 38 ships, 65 cities, 276,400 hectares of agricultural land with 81,000 workers!
The  avenue of ram-headed sphinxes- 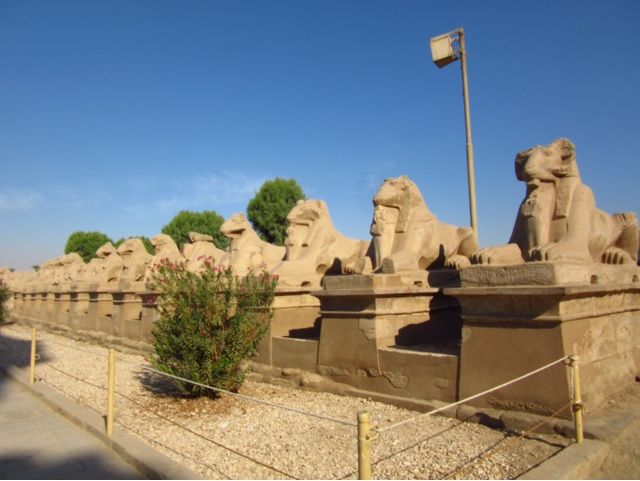 leads to the first pylon or entry gate- 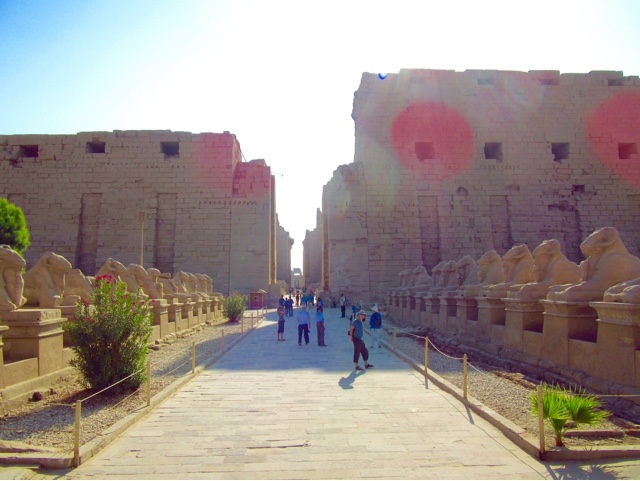 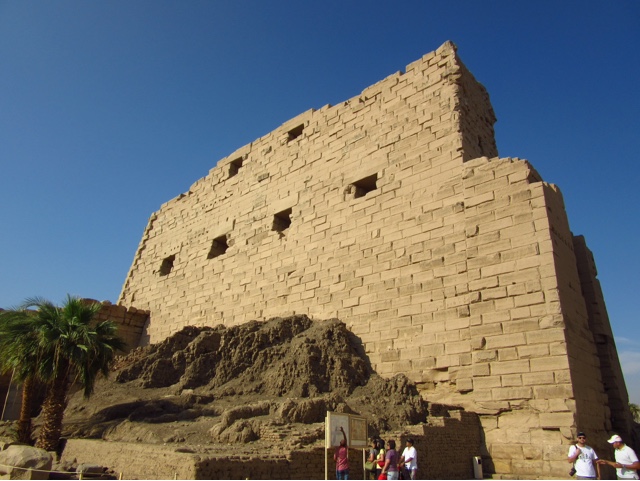 Ramses III is in the mummified position- 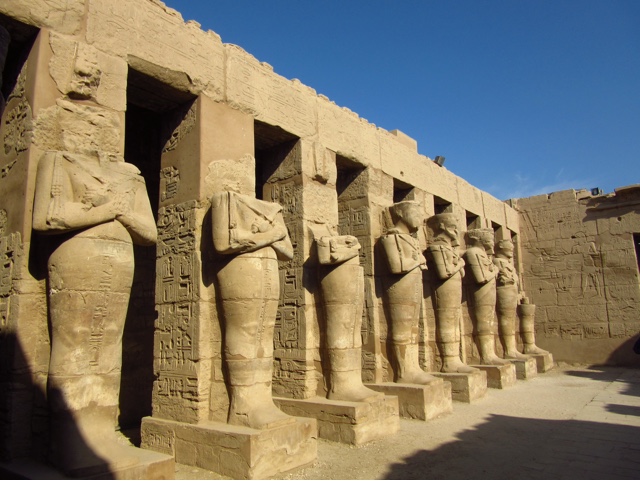 All the kings were so in love with themselves when they became powerful, they often destroyed what the last king had done and put images of themselves over the images of the former rulers.  Ramses II had 124 wives but #13 Nefertiti was his favorite.  Not that favorite because she's miniature compared to him- 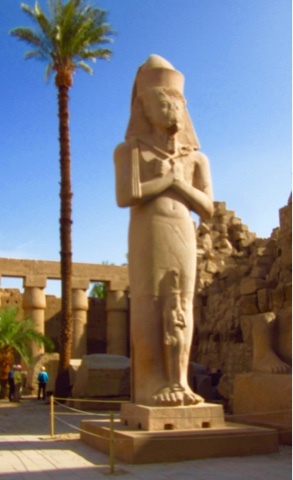 The Great Hypostyle Hall is the largest in the world with 134 columns representing the papyrus flower.  It was started by King Seti I (1313-1292 BC) and finished by his son Ramses II (1292-1225 BC).  The columns that are in the sun show an open lotus flower and those in the shade are closed- 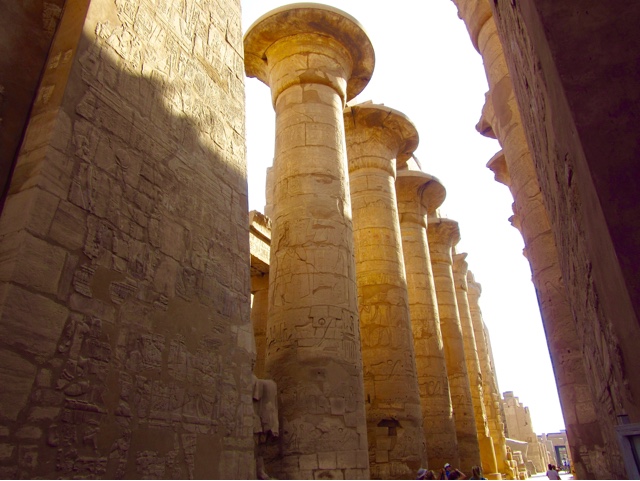 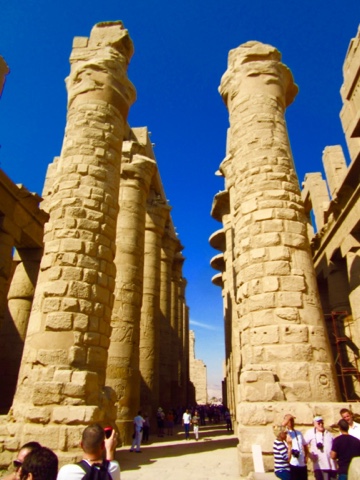 Mut - the god of motherhood, Ramses 2 - the king, Amon-Ra - the god of everything are shown here with 2 feathers as a sun god and Khonsu the moon god- 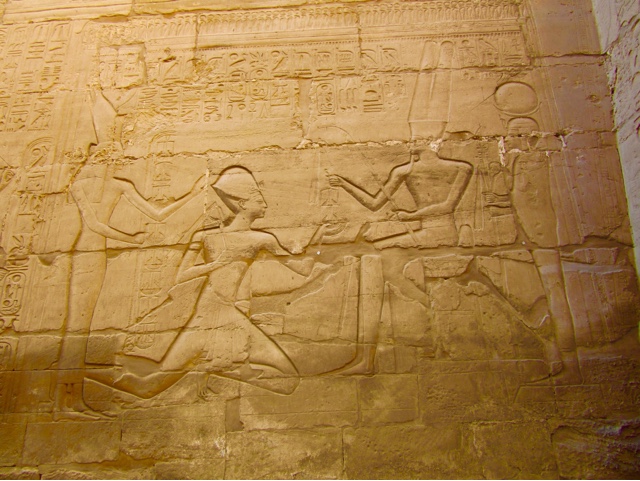 Queen Hatshepsut (1473-1458 BC) erected two 30 meter high obelisks.  They are the tallest in Egypt.  After her death, her stepson, Tuthmosis III, who had her killed, destroyed a lot of what she had done- 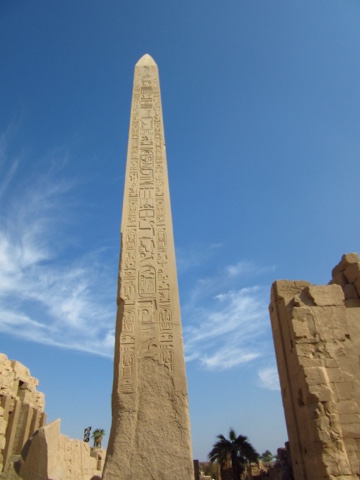 Ramses II with the tree of life- 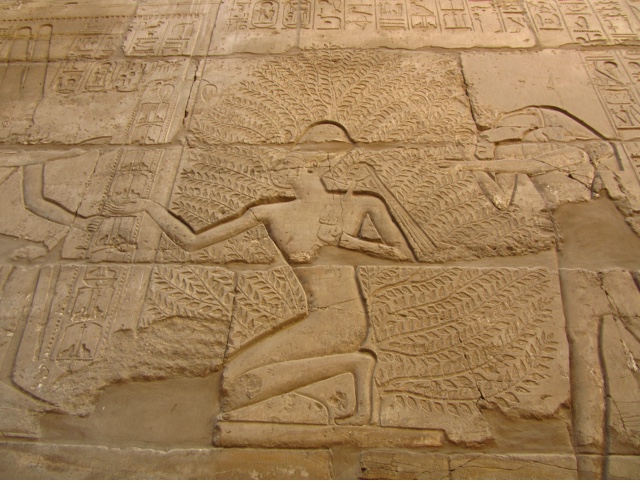 Life along the street- 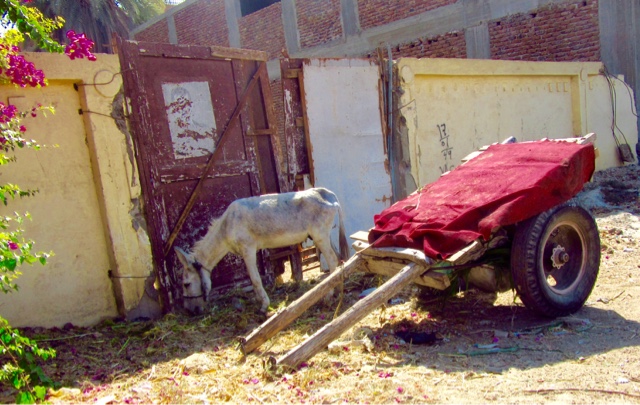 The Nile with the Valley of the Kings in the background- 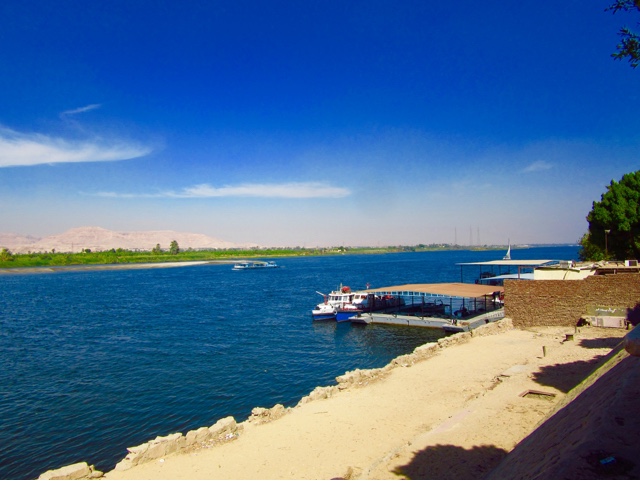 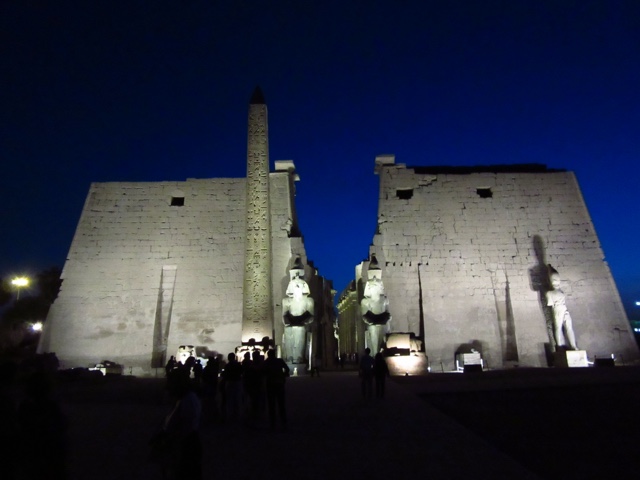 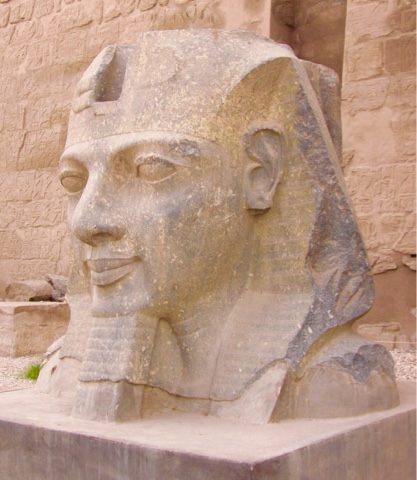 Noses are smashed off because without a nose, a soul can't enter- 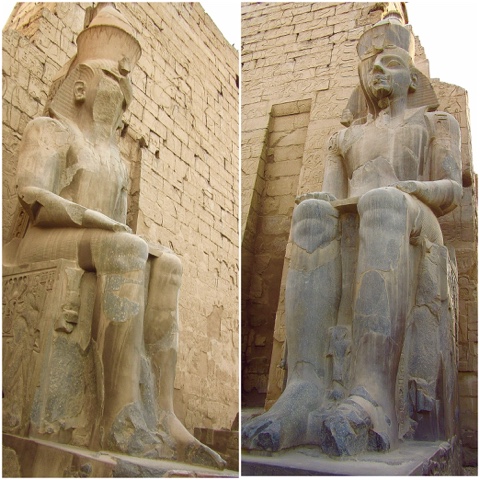 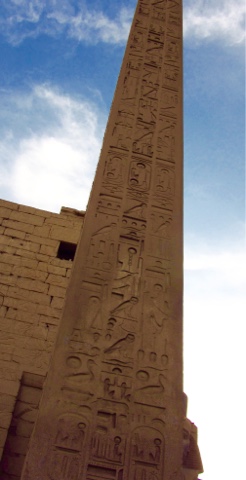 Hatshepsut was more into quality because she had her columns carved from granite whereas Ramses II was more interested in quantity so he used limestone.  Her columns are much nicer-

King Tut is the only king I've seen who had his wife carved the same size as him.  All other kings had their wives carved a lot smaller than them- 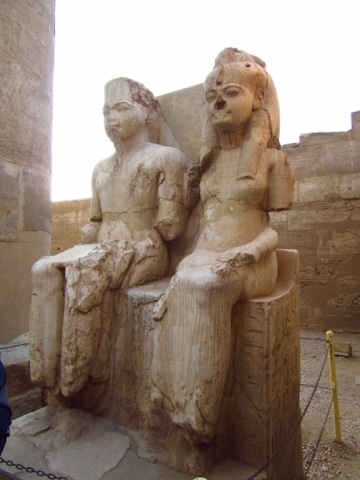 There are a lot of cool carvings.  Alexander the Great added the Holiest of Holies room in 330 BC- 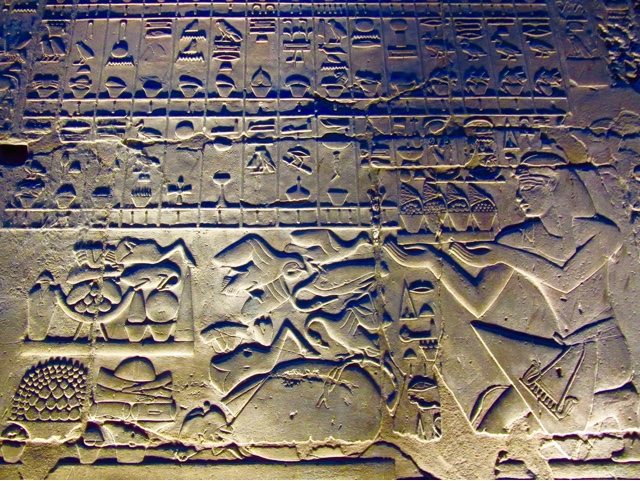 Pagan, Islam and Christian influence are evident here.  The Last Supper is depicted in a frescoe- 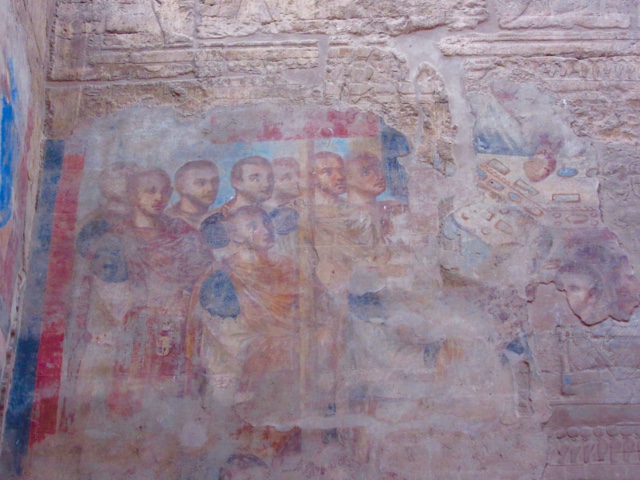 There are some beautiful columns- 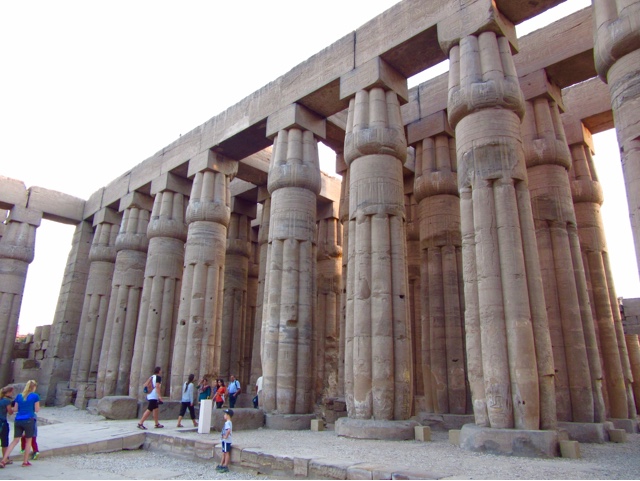 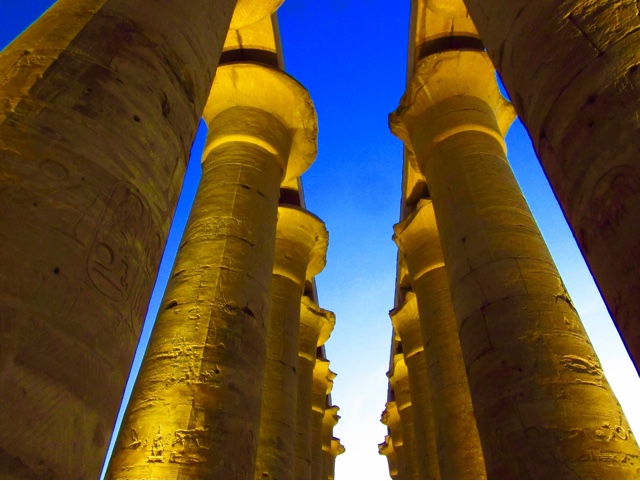 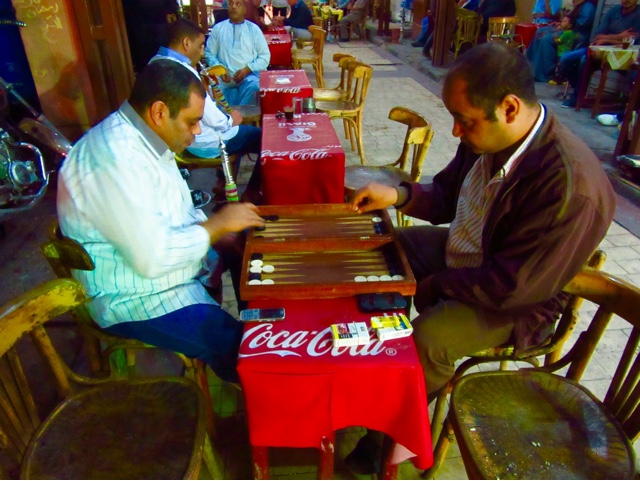 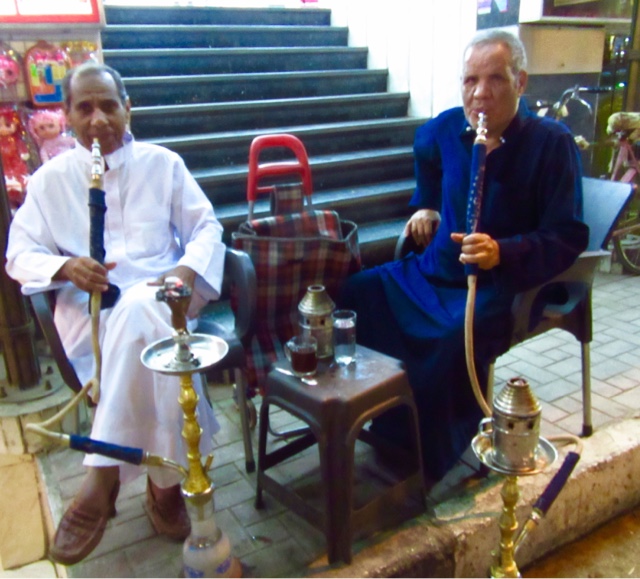 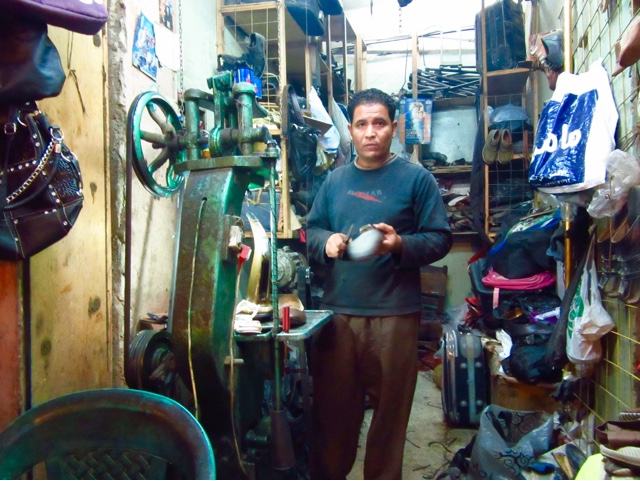 I've enjoyed my time in Luxor.  The people are super friendly, sometimes a little too friendly because they are hasslers in the markets but they are desperate for money because of the decline in tourism.  Tomorrow we're off to Aswan at 6 am!
at November 09, 2015