We got out of Colombia very quickly - it's always fast leaving and then we were into Ecuador in about 45 minutes!  That might be a record!  We continued on for a few hours to Otavalo.  Ecuador seems to be a very agricultural country with small terraced fields and even some irrigation.  It's very green and lovely- 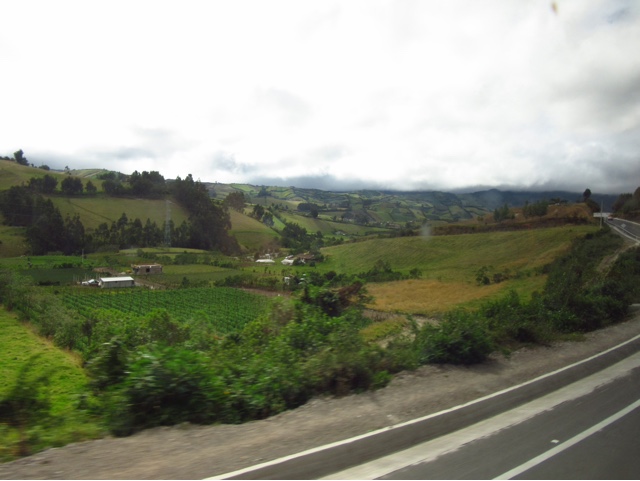 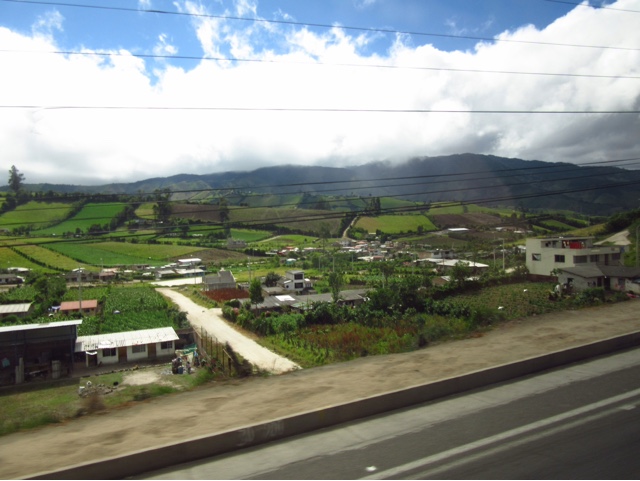 We were in a rush to get to Otavalo for the market.  The roads did co-operate: they were excellent but of course it's tough for the truck going downhill - it's very slow going because Jono doesn't want to lose control and/or the brakes and send us into never never land.  It was another day of up and down over mountain ranges- 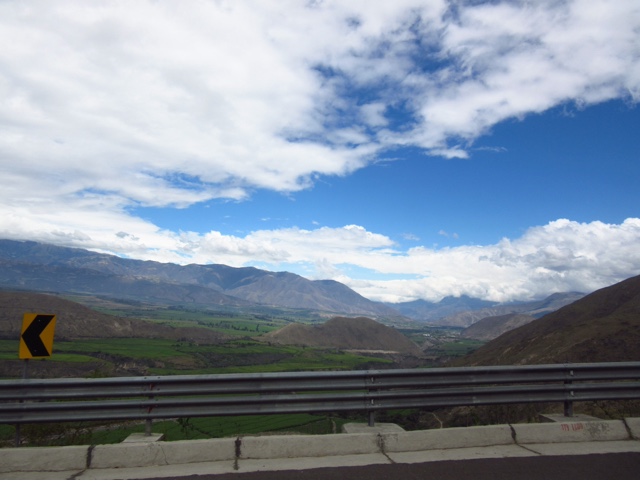 Farm work is done by hand and they seem to be in between seasons.  There's not a lot growing right now- 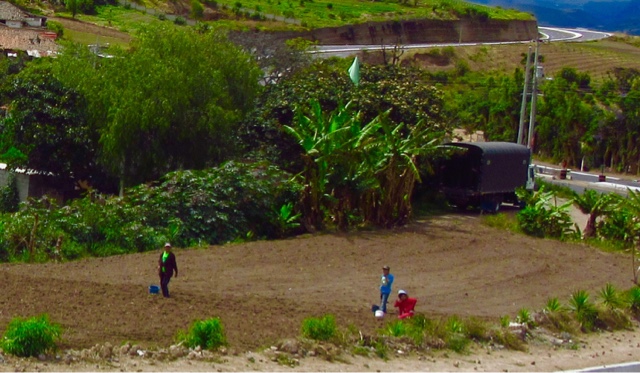 Once in Otavalo, we parked near a large supermarket and had a couple of hours to explore.  My first stop was to the animal market but I got there around 12:30 and it was more or less over by 11.  There were still chickens, ducks and rabbits for sale- 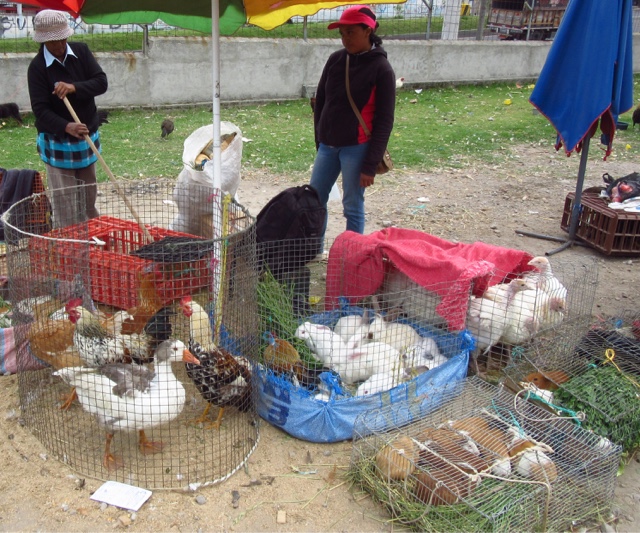 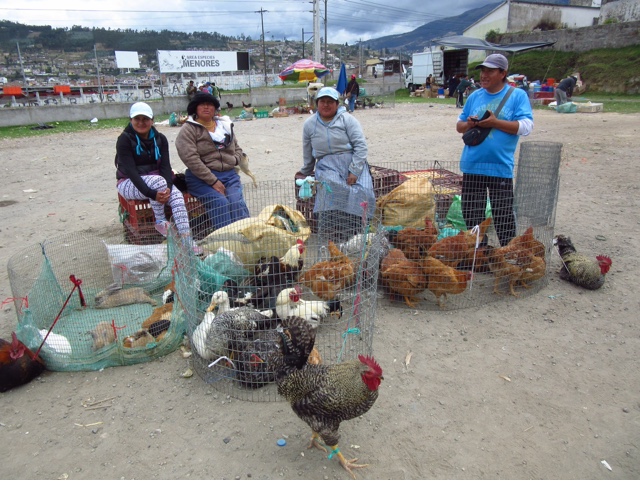 They also sell chicken feed: corn.  I'm not sure if these chickens are dead or alive- 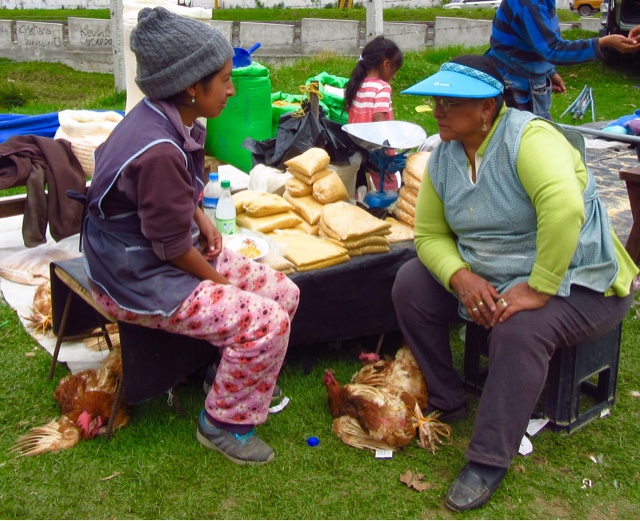 I thought this gentleman might lead me to the animal market- 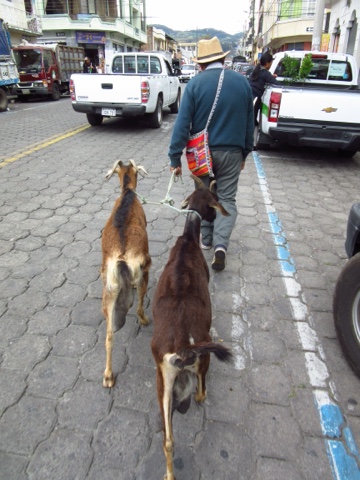 Back at the main market- 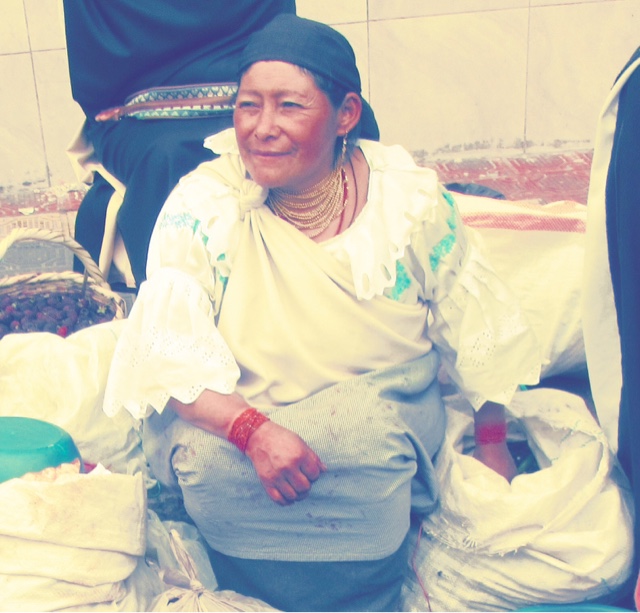 There were musical instrument stalls- 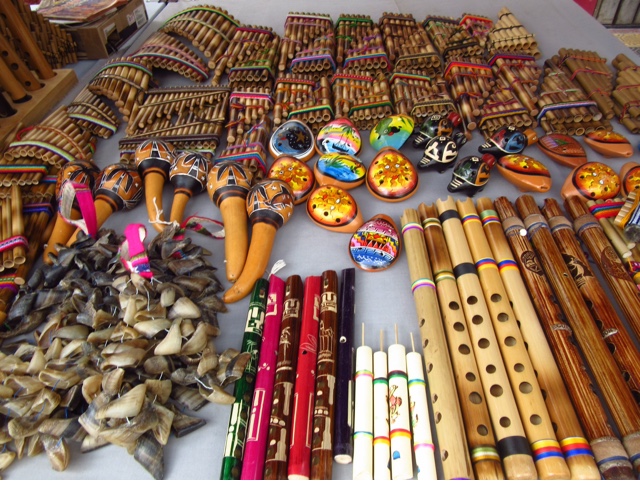 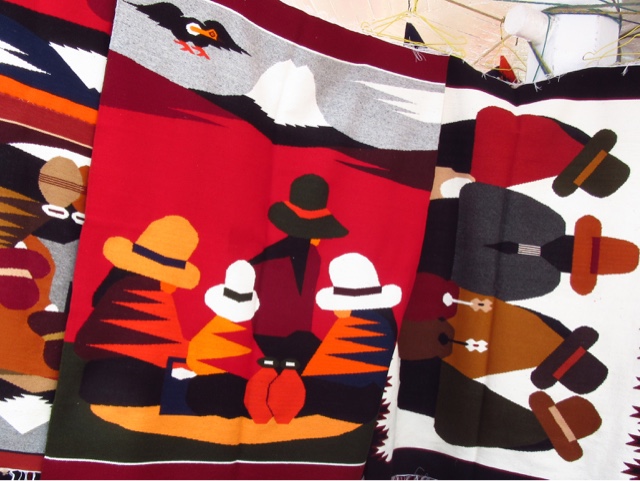 and bags, plus the usual clothing and trinkets made in China and all the fresh vegetables you could want- 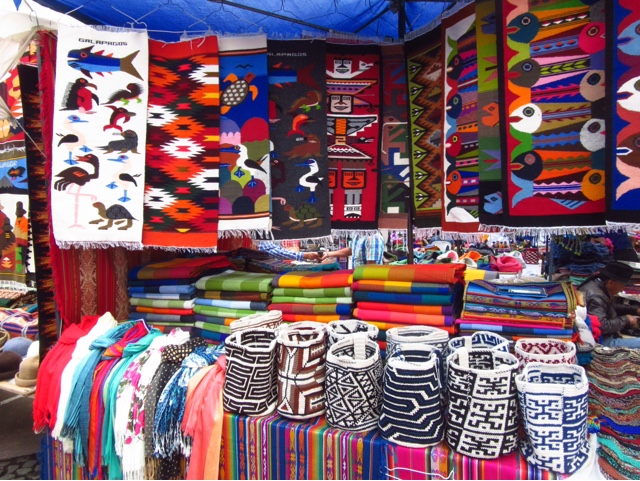 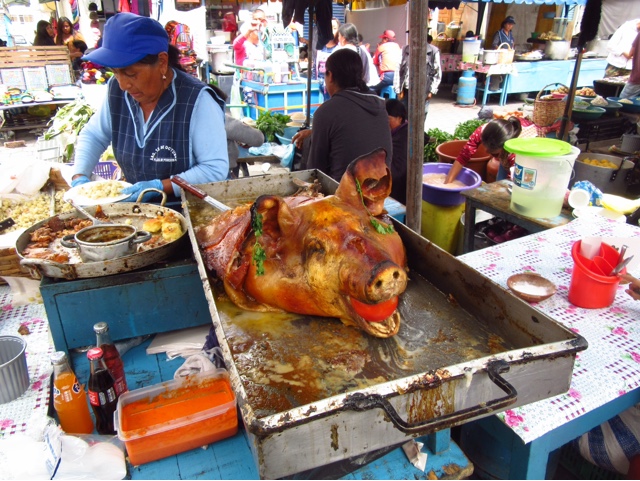 This full plate was $2.50 US.  Ecuador doesn't have their own currency: they use the American dollar but unlike Belize, things cost Ecuadorian prices which translates to cheap- 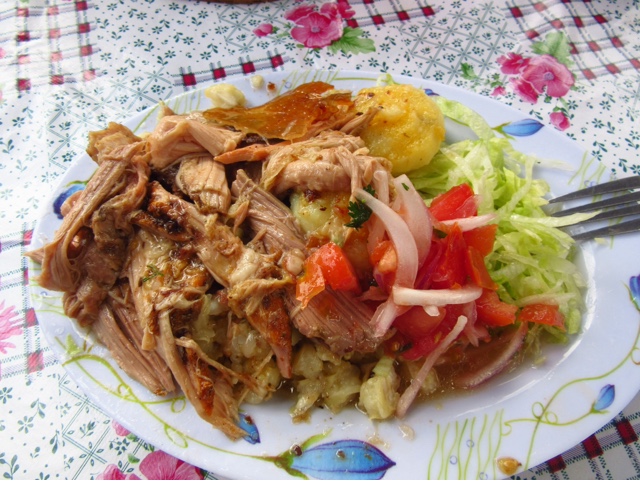 Cooking methods are a bit different- 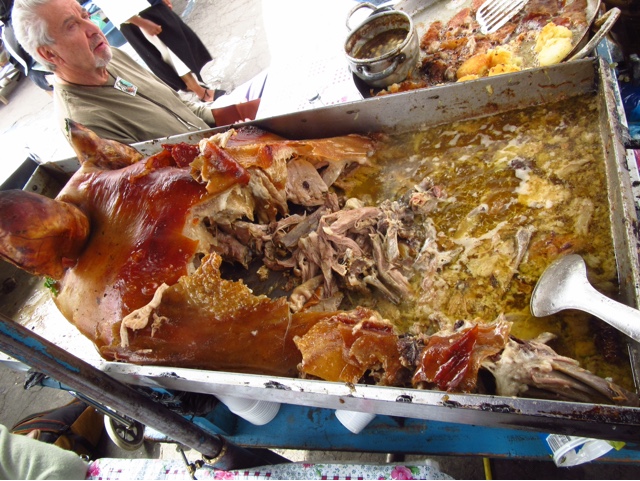 The fat boils and the server makes sure everyone gets lots of hot meat as well as some crispy skin.
I've never eaten maize in this form before- 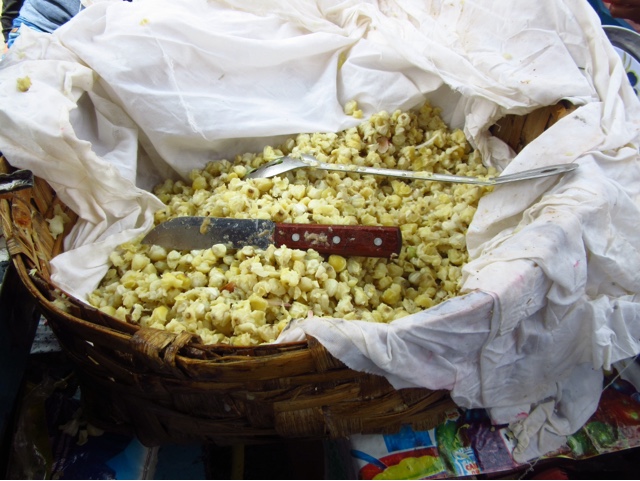 It's pasty tasting but not horrible.
More stalls at the market- 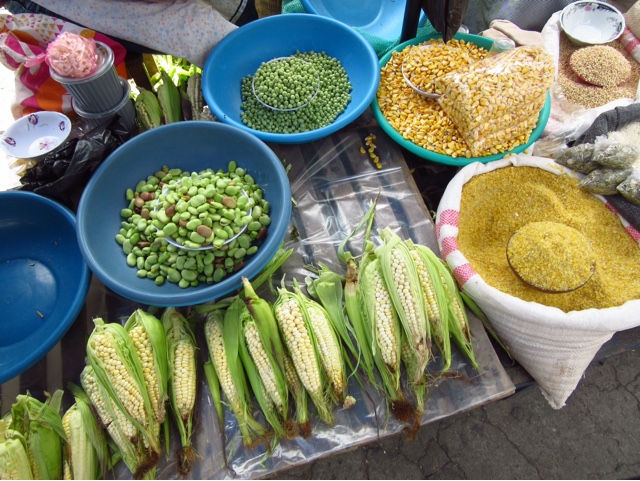 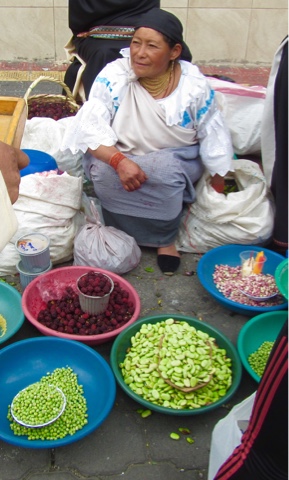 I bought a couple of woven bracelets from this woman- 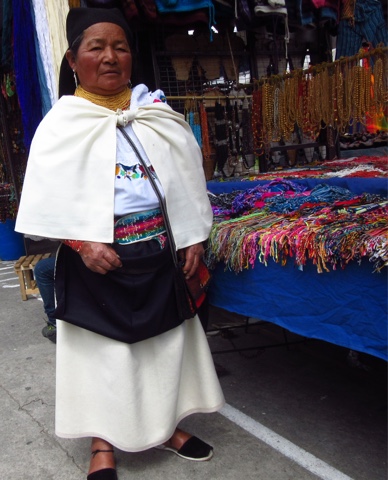 I had hoped to pay for my Galapagos cruise here but I got to the bank at 1:05 and it closed at 1!  I was so disappointed because if I'd have known, I could have been there on time.  Now I have to find the right bank in Quito.
I want to introduce the group and so today I'm starting with Norm Seddon who lives in Birmingham, UK when he's not travelling.  Norm used to travel in a Land Rover with his wife:  they visited from the U.K to Australia and to the Americas.  They shipped the truck from Australia to America. That was a 2.5 year trip!  Unfortunately Norm's wife passed away and so now he travels alone.  Norm likes to build and renovate when he's not travelling and this certainly isn't his last trip!  He's got more big plans:  UK to Oz starting this March and then Transafrica in November.  Norm loves to meet people and see different places.  Today he's also celebrating his 77th birthday! 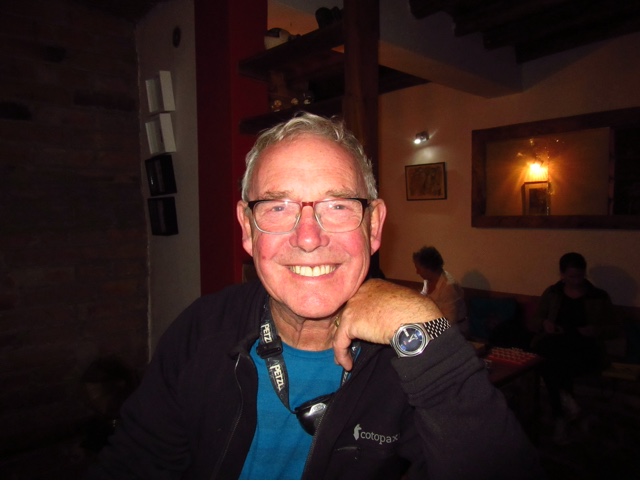 It took over an hour to find the campsite and the cook group, who stayed behind to shop for tonight, beat us by coming in a cab.  We took a long, windy, prairie trail but made it... eventually.  We're camping for 2 nights then off to Quito.
at October 21, 2017