Leaving my hostel on the way to the airport, I finally got a good picture of the Jenga building - 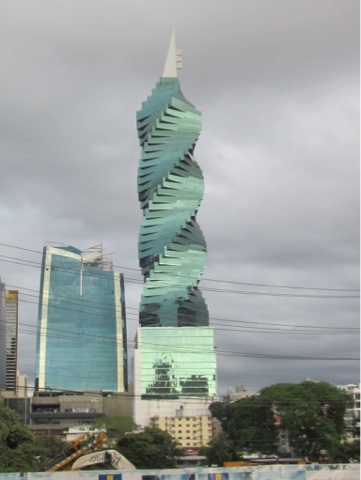 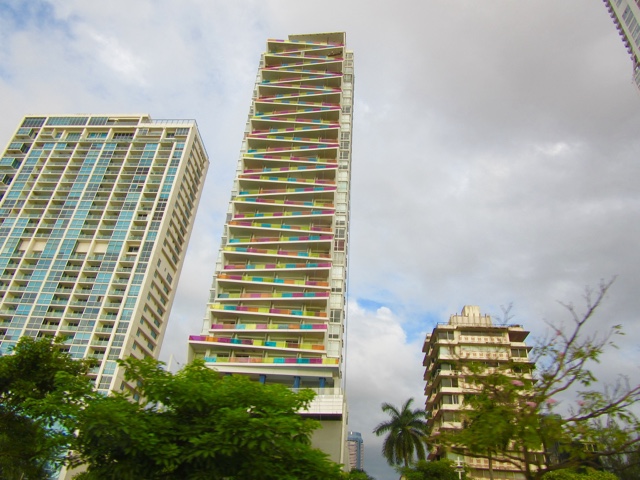 What a fiasco this morning trying to check in to go to Cartagena, Colombia at the Avianca airline counter!  Because we are driving in South America, I obviously do not have a flight booked to leave Colombia, so according to Avianca, I would be turned away at immigration in Bogota, my first stop today!  So the woman at the counter conferred with her colleagues, read my itinerary, took my bribe of a metro card :) why not?  I'm in Central America!, then took my itinerary and passport and disappeared for 30 minutes.  She returned shaking her head.  I explained that I planned to fly from Rio de Janeiro to Guatemala City February 13, 2018 but for no reason at all, I had not yet booked my flight.  She suggested some sort of flight would make a difference, so with only 30 minutes of free wifi at the airport to play with, I quickly booked that portion of my flight home.  Another 30 minutes passed (good thing I was at the ticket counter 3 hours in advance of my flight) and finally she appeared with information about a required Platino payment at Colombian immigration of 190,000 Colombian Pesos which is $81 Canadian.  Fine.  Just give me my boarding passes please!  She thought maybe if I had a flight booked to Canada, my home country, I might not have to pay it so I was madly thinking of a date to book home from Mexico City in March.  Oh ya, I forgot.  My flight to Bogota was fine and I had a guaranteed seat but I was on stand by for Bogota to Cartagena.  Little did I know that the Avianca pilots have been striking the last few weeks.  My early afternoon original flight was cancelled and now standby!
I eventually got both boarding passes and was free to go through security - 2 hours later!  I had heard about the Platino thing from a New Zealand traveller last night.  He and his South African girlfriend flew from Panama City to Bogota but were denied entry because of her S.A. passport.  And by the way he said, there's something about Canadians too and a platino thing.  You might need a visa!  What!  A visa!  You don't just get visas from a roadside stall!  I googled and our good old Government of Canada website mentions nothing about this!  So I could do nothing but wait until I got to Bogota.
The countryside close to Bogota, Colombia- 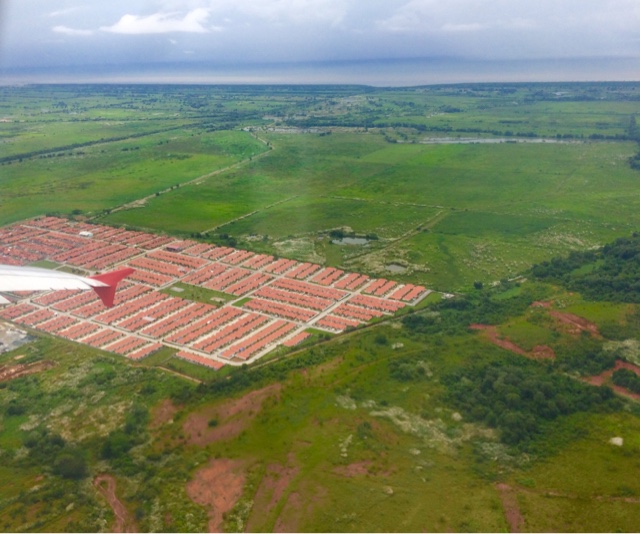 The flight was pretty much empty so once again I had 3 seats to myself.  Interestingly enough, on a 1 hour 10 minute flight, they serve drinks - red wine is free and lunch- 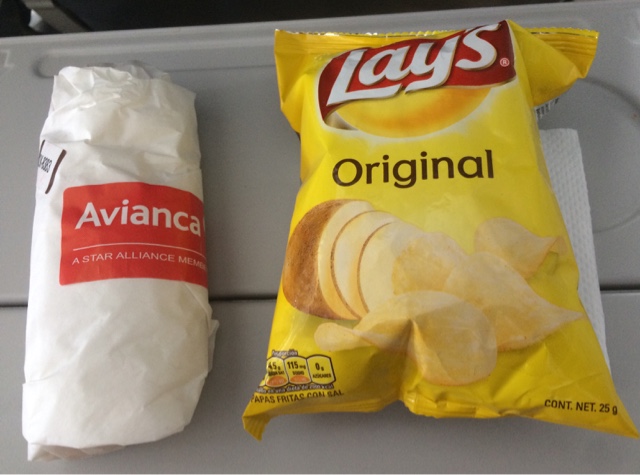 Upon arrival, sure enough, there were signs for Canadians to join a special queue.  No one was in the queue so I walked right up to the kiosk, paid my 190,000 pesos, got my stamp and I was in the country.  Weird there is a line just for Canadians but the official said the Platino charge has been in effect for 2 years.  Canada charges Colombians, so Colombians charge Canadians!  Nice.  She didn't  ask about an ongoing flight or anything!  After my morning,  I couldn't believe it... well actually I could because having travelled to 74 countries, that was the FIRST time this has ever happened and it didn't make sense.  Anyway, everything turned out fine but I didn't get to Cartagena until 6:30 pm and by then it was dark.
Boutique Bourbon Hostal is nice but boutique?  Come on!
There are 16 beds in my area- 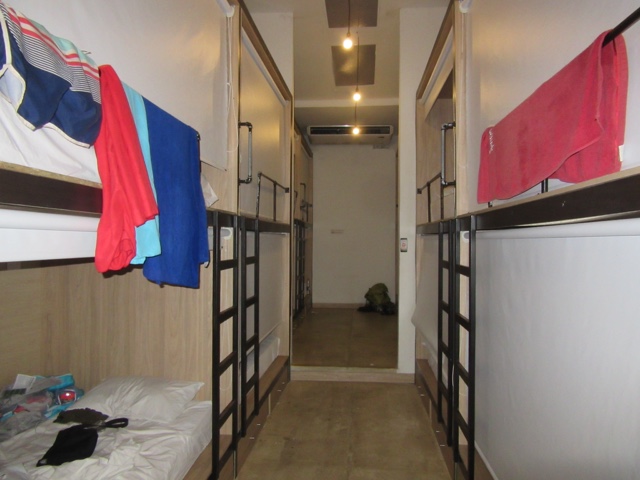 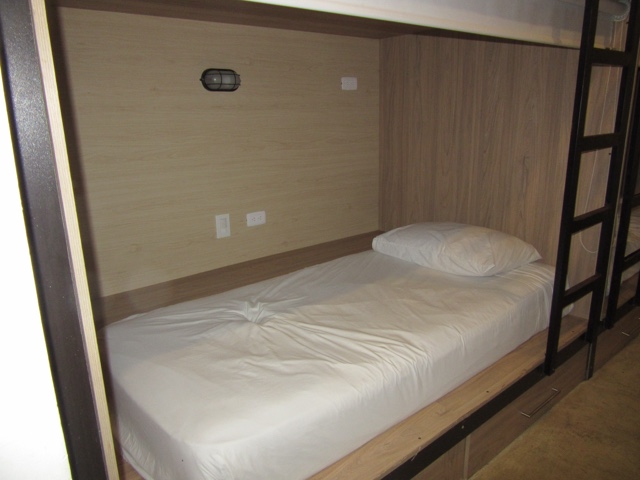 has a light and 4 plugins, as well as a wide shelf and a drawer.  For privacy, I just pull the blind- 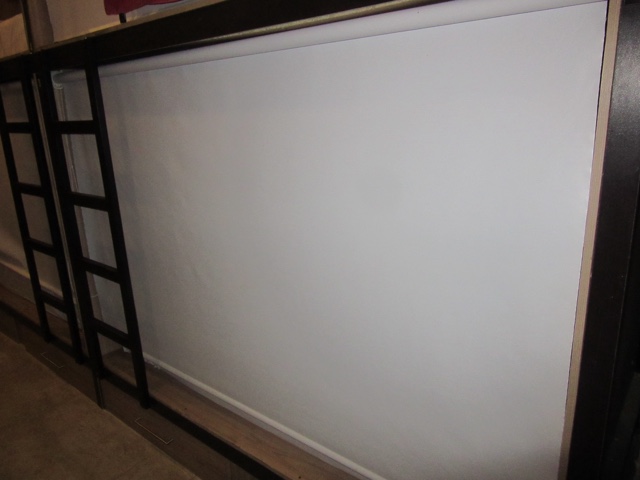 After getting settled, I did a little emerald shopping -wow are they beautiful and expensive!
I'm in the old walled city so it's very touristy - lots of shops - jewellers and artists.  I love these glass objects- 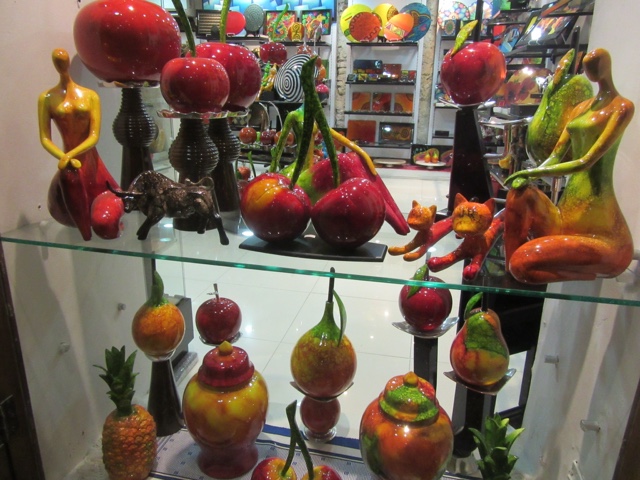 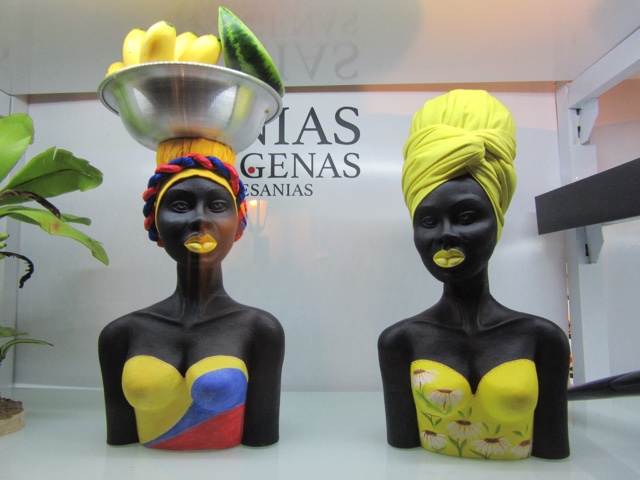 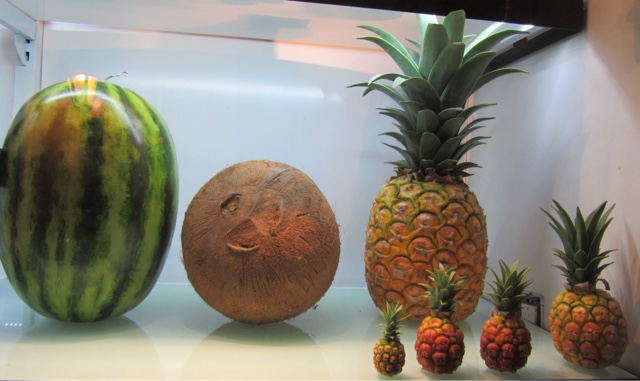 The coconut in the middle is made of wood.
Looking forward to a good sleep and exploring Cartagena tomorrow!
at October 04, 2017