Because the islands were never connected to the mainland of South America, all species had to somehow cross the 1000 km of water.  Some reptiles, mammals, plants, insects and land birds might have been carried across on floating vegetation.  Plant seeds and insect larvae may have been in the animal's stomachs and/or attached somehow to their bodies.

Today, there are birds born with different bills than their parents that allow them to take better advantage of their surroundings.  After many generations, this new bill is a favorable trait that eventually becomes the norm.  Then, the differences between the original animals and the 'new' animals produce a new species.  This is the thinking behind Darwin's theory of evolution by natural selection.

This morning's masterpiece: so cute! 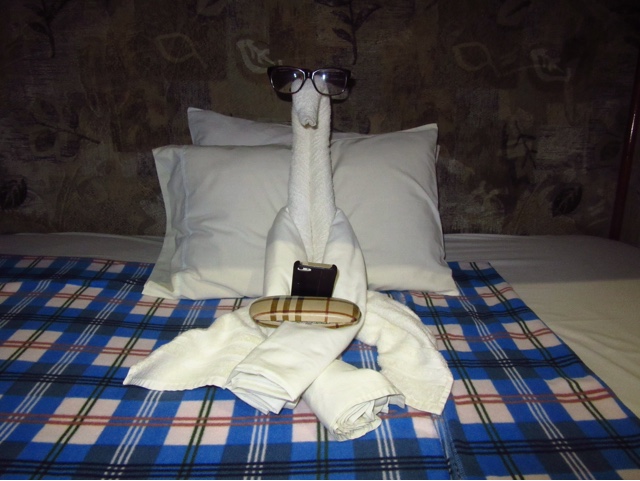 We visited the island of Floreana this morning- 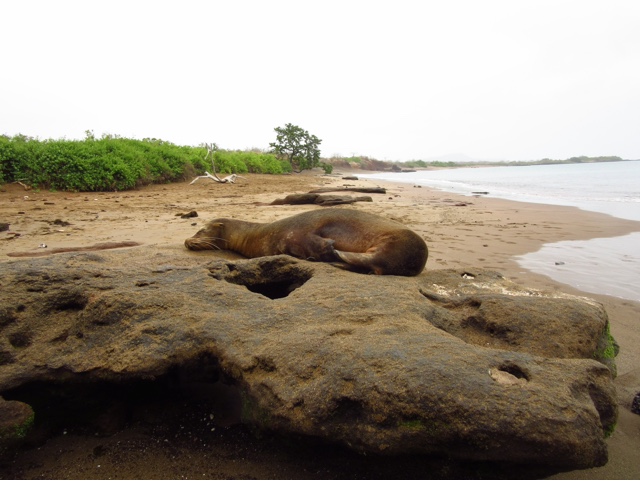 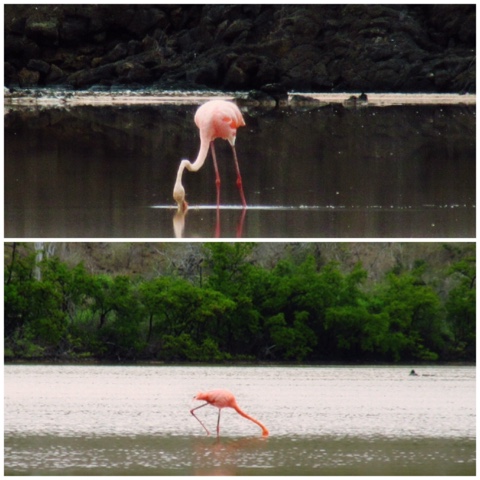 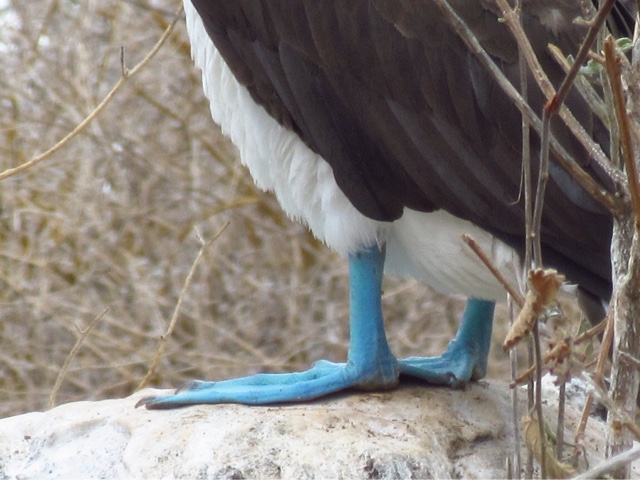 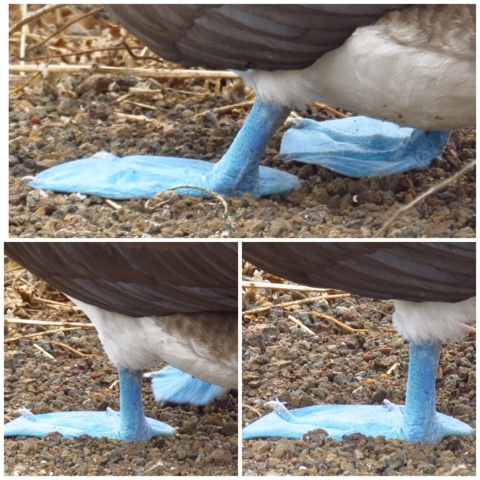 After, we snorkeled in 3 different spots looking for Galapagos sharks.  We found a few, the largest being close to 3 meters in length.  We also saw millions of colorful fish, a turtle and a sea lion swimming.  Of course I have no pictures because my camera is still sitting in a bag of rice!

This afternoon we visited the Post Office.  Edgar had told us that you can mail postcards there for free and they get delivered all over the world.  So, I wrote one to myself and one to Nico- 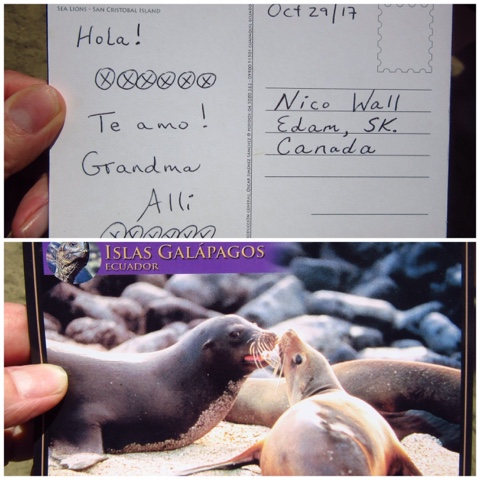 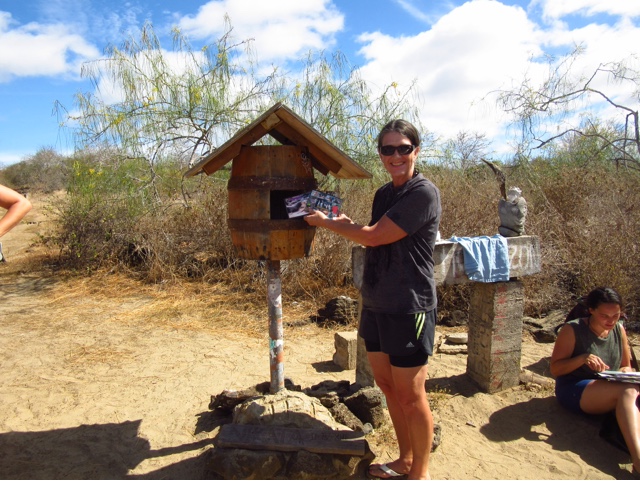 isn't quite what we were led to believe.  First, it's filled with posts cards other travellers have left behind, so you're supposed to read through the addresses and if one is near where you live, your take it and deliver it.  Some people were super disappointed because they spent a small fortune on postcards and know for instance, that they'll NEVER be delivered to Slovakia!  I took 4: one to Sherwood Park, another to Saint Albert, one to Edmonton and another to Calgary.  This spring/summer I'll deliver them.

We then walked a little further and found the remains of a Norwegian settlement from the 1920s.  What the hell were they thinking?  Moving to this desolate island, with little if any fresh water, nothing really to eat and barren land.  They didn't last long- 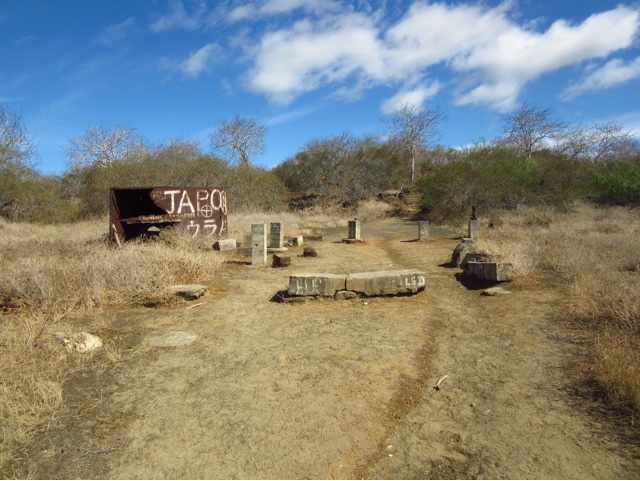 The next couple of hours were spent on the beach and snorkeling, trying to see sea turtles and did we see turtles.  I counted 12!  They were white, white with black spots, green, brown and my favorite was orange.  It had orange diamond shapes on its head and back.  So cool!  The second time I went in, I saw 7 in one grouping!  Then I looked up and a sea lion was coming straight at me like a torpedo!  Luckily the deke around we humans and are harmless.  After my second time snorkeling, I swam to the boat and basked in the sun, waiting for the others.  It was an awesome afternoon! 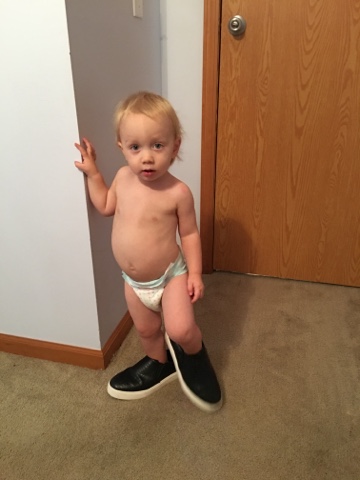