The islands are 4-5 million years old and were formed by underwater volcanoes erupting and rising above the water surface.  Less than 20 km from the coast of the northern islands, the water is over 3000 m deep!  Hope we don't sink!  We only see the top third of most of the volcanoes/islands.  Most of the islands are made of basalt which is more fluid than most volcanic rock.  When basalt erupts, it's in the form of lava rather than in explosions so the Galapagos have gently rounded shield volcanoes rather than the typical cone shaped ones. 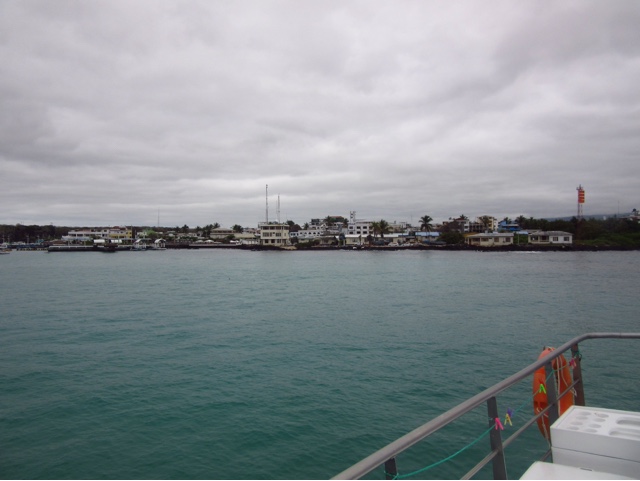 to visit the Charles Darwin Research Station.  We weren't the only ones visiting the town- 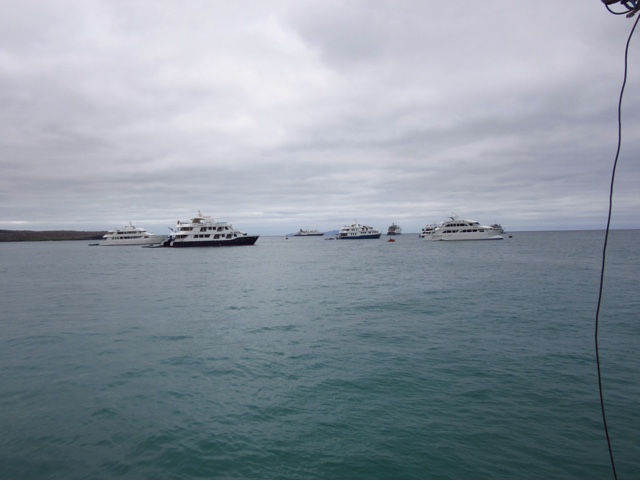 At the Research Station, we learned about Solitary George, a 100 kg, 100+ year old tortoise, whom when he died, was the last one of his species.  His body was sent to the Natural History Museum in New York City where it was preserved.  He returned to the Galapagos last year- 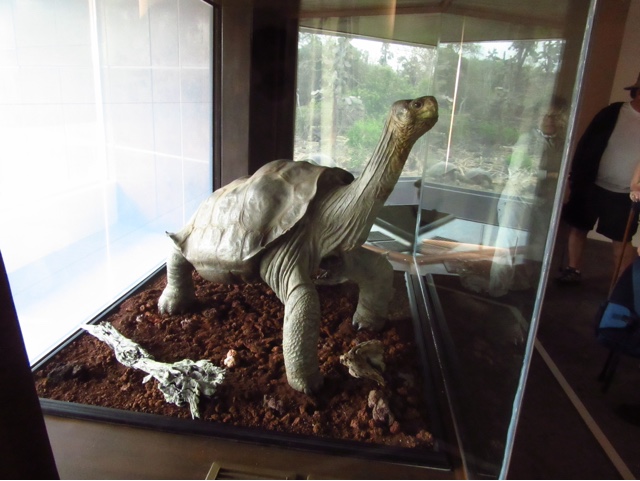 In 1906 the last three Pinta (an island) tortoises were sent to museums, so they were obviously dead.  In 1971, Lonesome George was found on Isla Pinta.  In 1972 he was brought to the research station with the hopes of him reproducing.  They tried to breed him with other species but the eggs would not develop.  He died in 2012, childless and that was the end of his species.

Since 1970, the research centre has returned 5456 young tortugas to their islands.  Eggs are removed from the islands and hatched at the breeding centre for safety reasons.  When the tortoises are 10, they're returned to their original island. 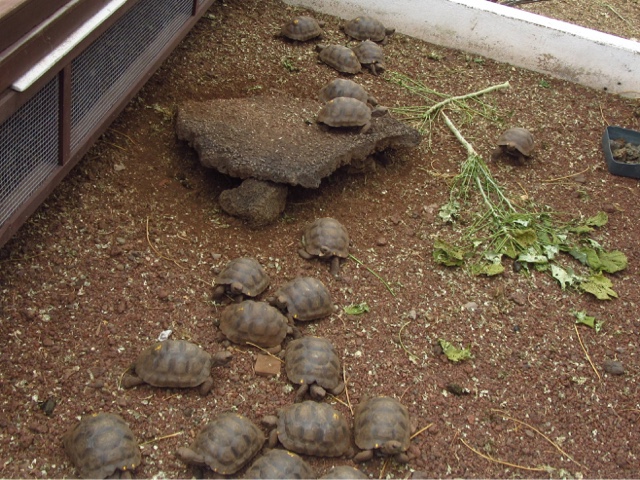 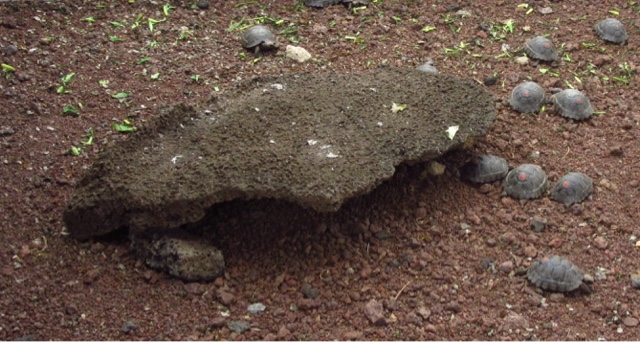 Galápagos tortoises eat at least 70 different species of plants.  Many of the plants are invasive species.  They eat a lot of fruit and the seeds pass whole through their digestive systems. Sometimes the seeds remain in their gut for a month.  As they move around in search of food, they transport seeds to different areas of their islands via their poo.  The seeds grow, guaranteeing more food. 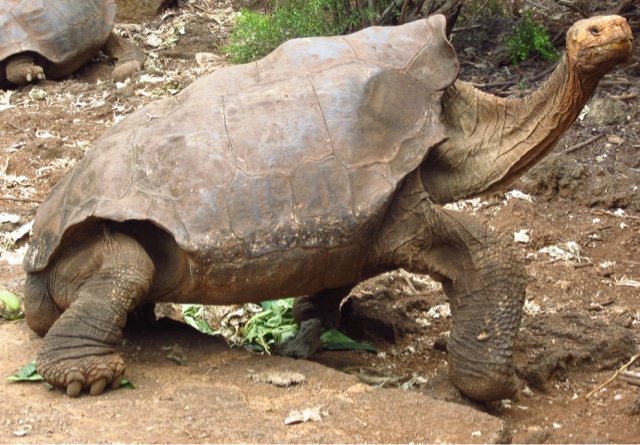 A saddleback tortoise is only found in the Galapagos.  They have longer front legs, longer necks and their shell is higher in the front, allowing them to reach upwards to eat leaves from plants.  They are found in arid areas- 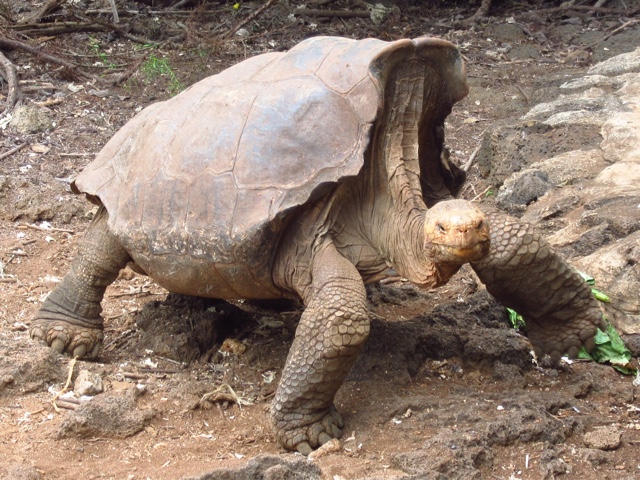 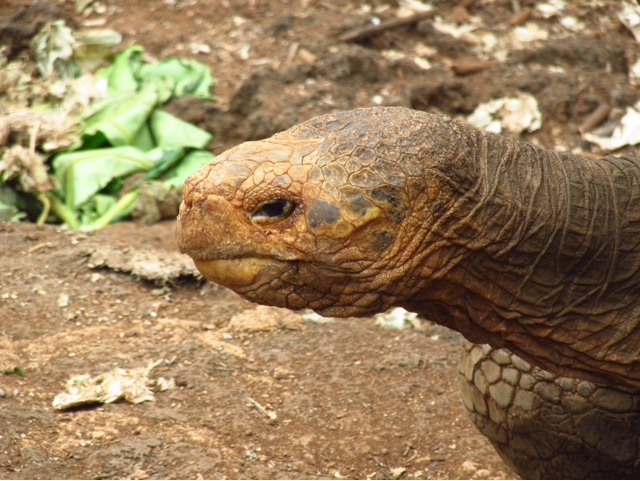 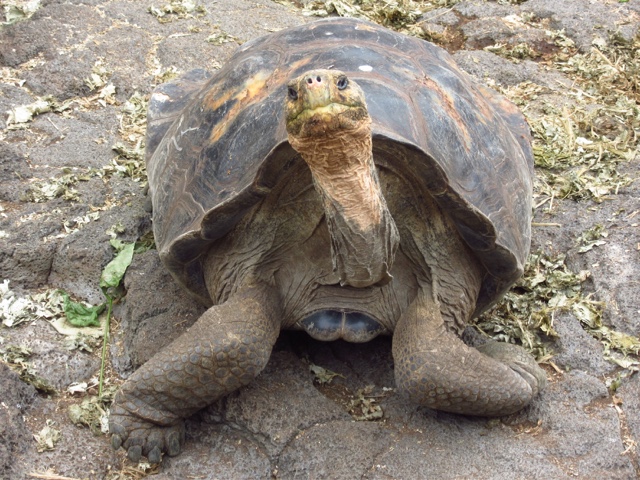 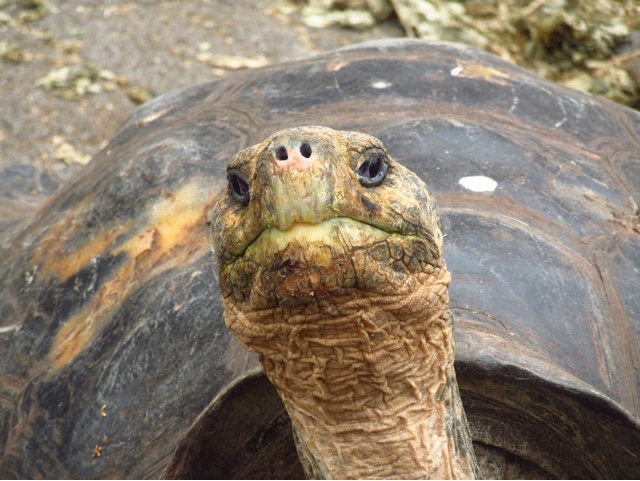 After lunch we visited the Él Chato 2 Ranch in the highlands on Santa Cruz.  We went there to see domed Tortuga who have shorter front legs and necks and a round shell in the front because they live in wet zones and eat food found on the ground- 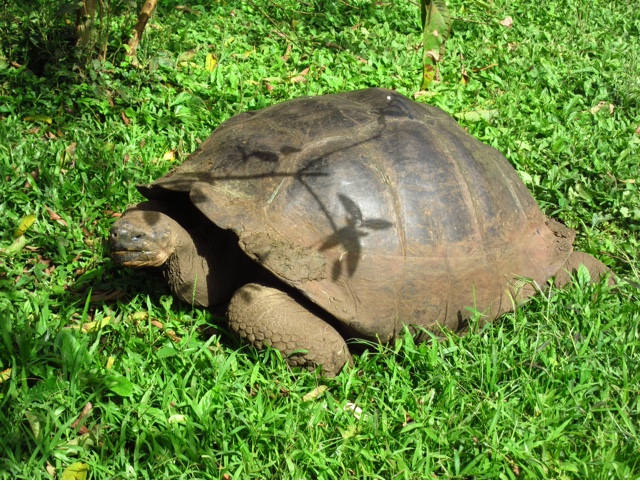 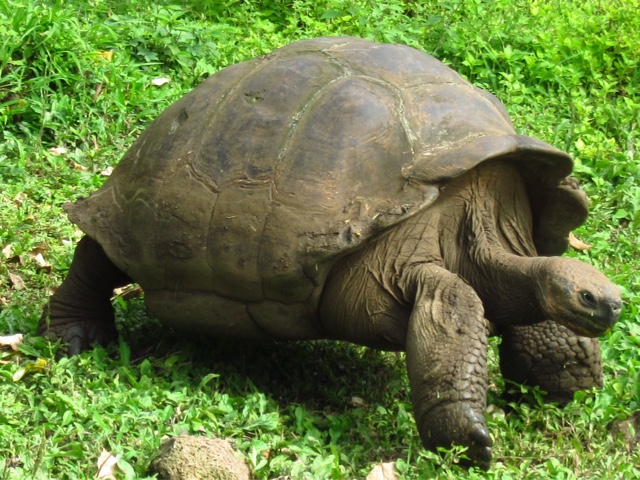 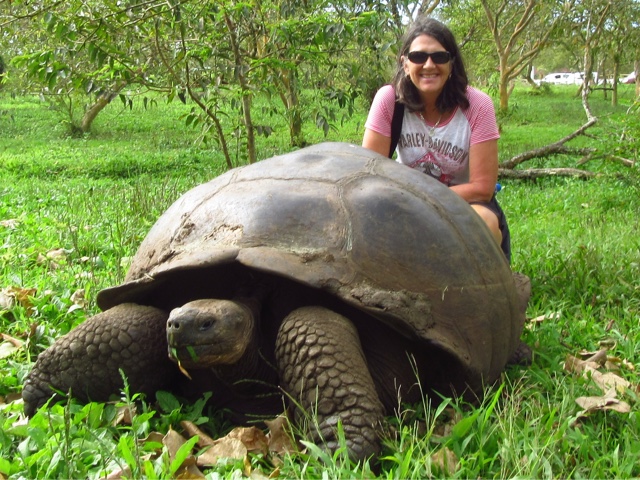 This fellow defecated in front of us- 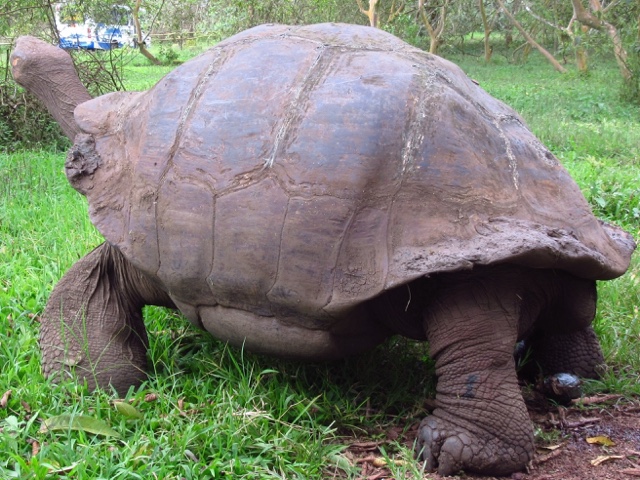 The male's penis is in his tail- 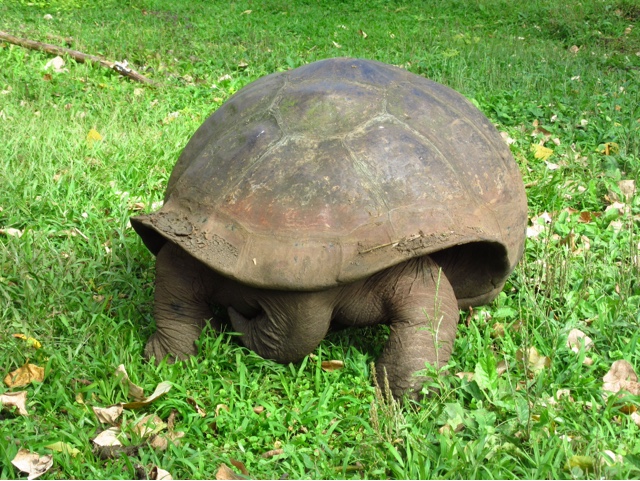 We also visited lava tunnels.  When volcanoes erupted, lava flowed to the sea.  Cold water hardened the outside shell but the hot lava still ran inside to the water and this caused the tunnels- 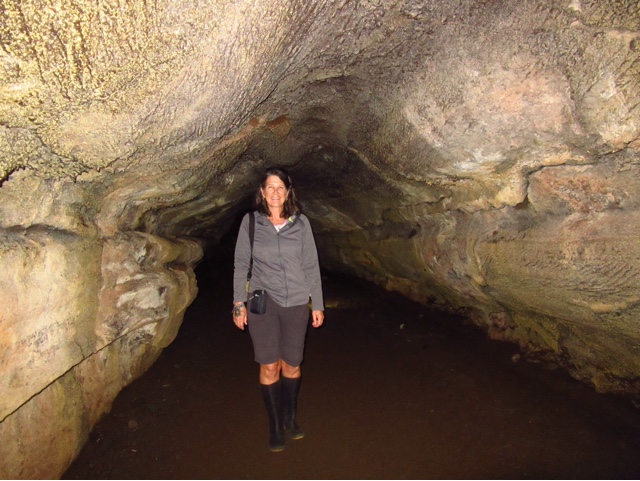 Later, we tried on tortoise shells- 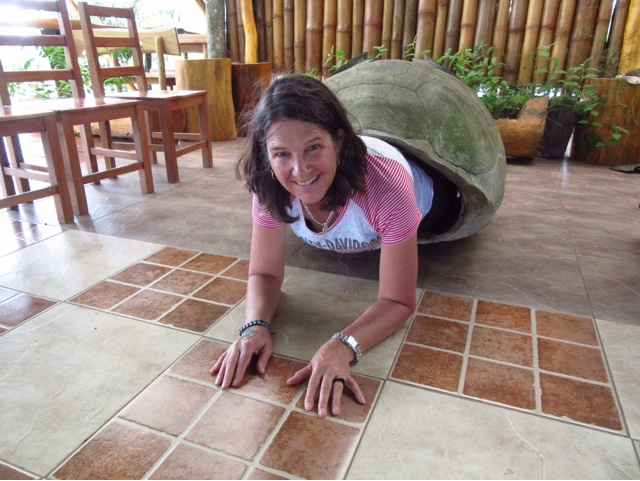 Road signs along the way- 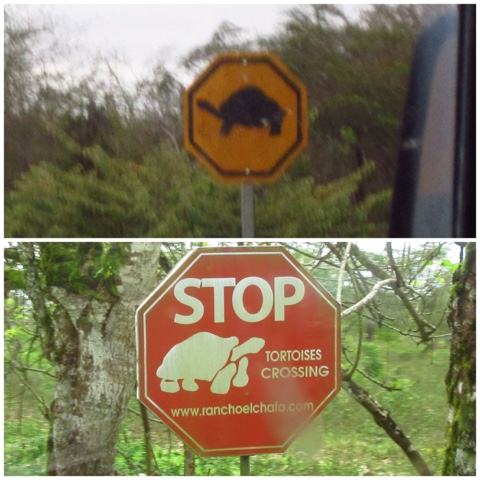 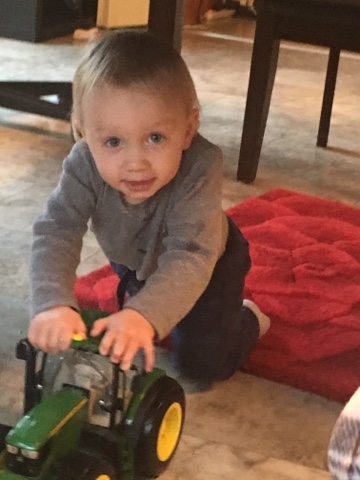