I was awakened early - Dyne was coughing up a lung.  I had my coffee and read the paper and by the time I got up, he was gone, as in left, not dead.  I was debating not going for the hike but was ready in plenty of time so I went and am glad I did.  A whole bunch, probably 50+ gringos meet a couple mornings a week to go hiking.  They have a ‘president’ who speaks about any news and announces activities in the works.  Then, each hike leader talks about their hike - the elevation and how long it takes, then people split up and go.  I’d say the average age was about 70.  Doris, Wayne and I went in the Chapel group which is the shortest and they ask that all newbies start with that one.  There were fourteen of us and it was easy.  There are stations of the cross along the way- 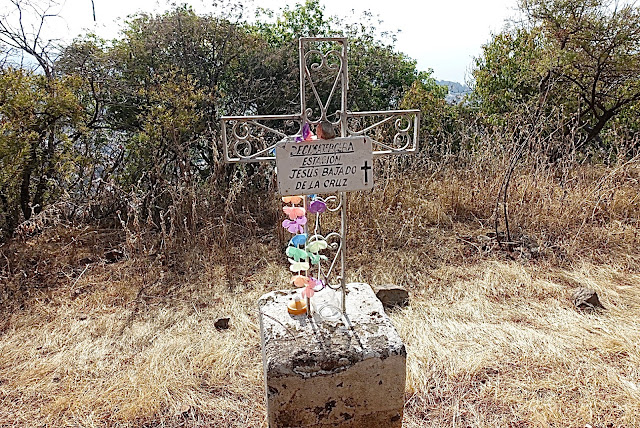 The view is nice and believe it or not, the lake is in the background.  It was very misty so it just looks like clouds- 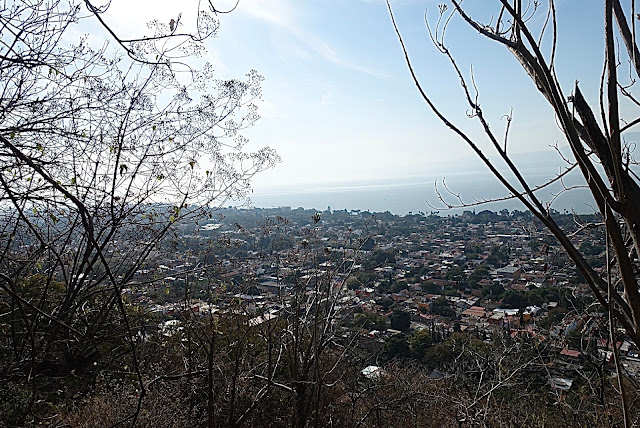 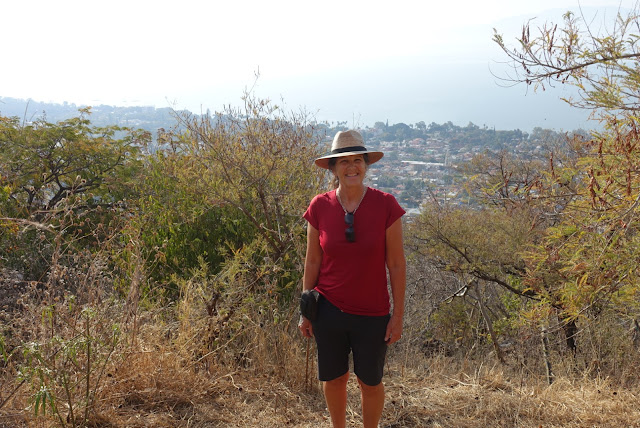 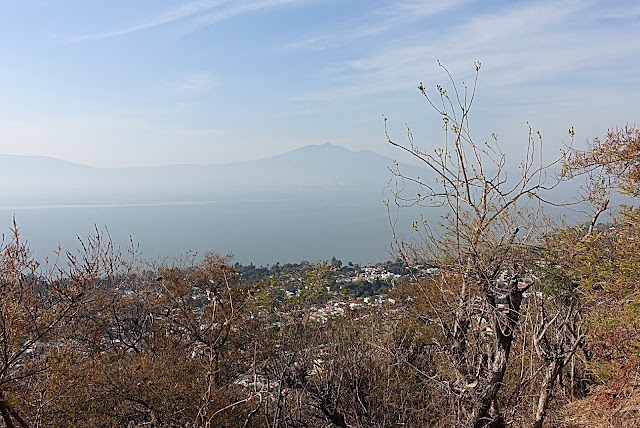 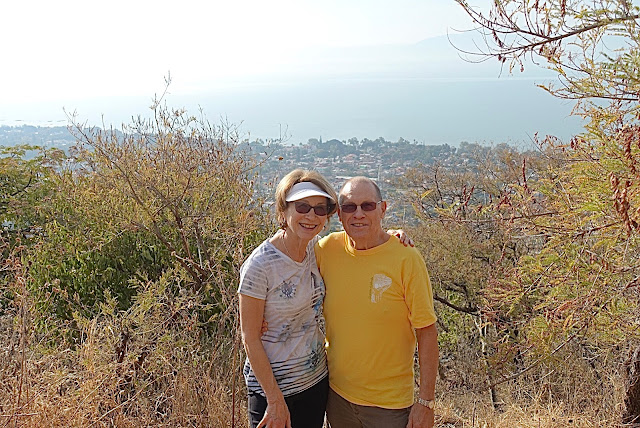 The chapel at the top- 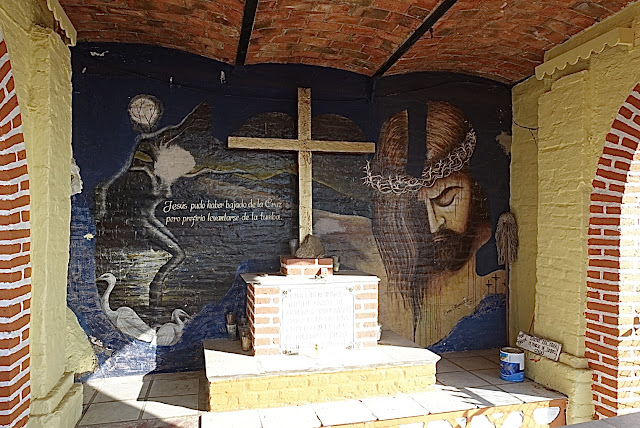 We walked down the same way and it was exactly an hour.  I’m glad I went and it’s a great way to meet others.  I visited quite a bit with Sven who is 82 and has been coming here for 12 years, usually for six months but this year he waited too long to book a place so is only here for two months.  He’s an electrical engineer turned electronics teacher and gymnastics coach. There were a lot of Liberals, I mean Ontario people in my group.  I didn’t Ike any of them because I’m blaming them for the mess we are in.

After, I went back to Nuevo Posada to see Pedro about some estambre but he didn’t have any and won’t until March.  Disappointed, I carried on to the Malecon where there’s a labyrinth in memory of Marie Dwyer Bullock with a message to walk the road to the centre of the heart for a spiritual feeling and peace- 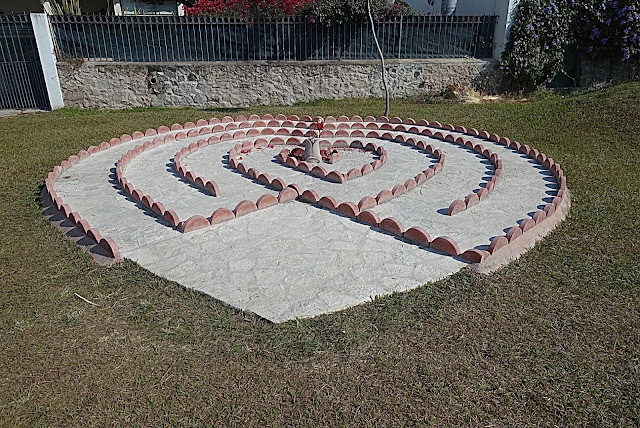 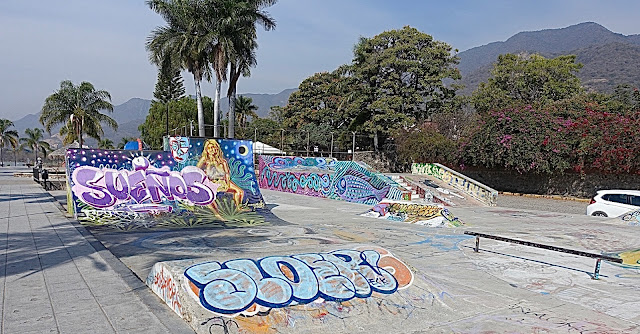 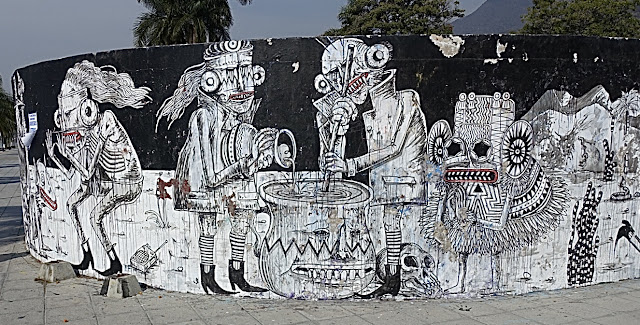 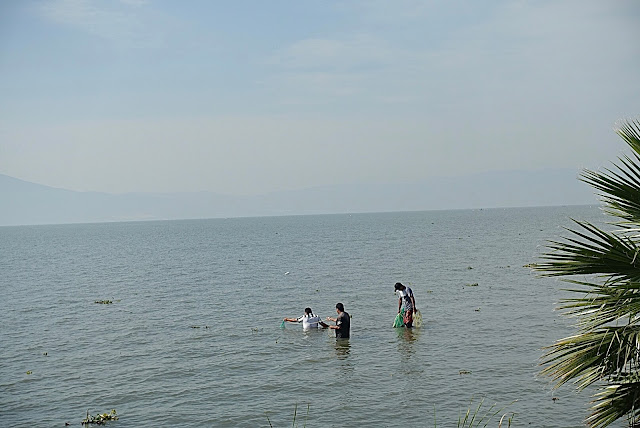 It was my turn to supply the beer for our happy hour.  We like Modelo Negro but not a single tienda had it so I decided I needed to go to Walmart.  I was going to catch a bus and there just happened to be one sitting at a red light so I started to run towards it and this little wild dog came after me, nipping at my heels.  He didn’t bite but he distracted me enough and I charged back at him, wasting enough time for the light to turn green and the bus to take off.  So I walked - there and back which was fine.  Unfortunately the only Negra they had was in bottles and sold in 12 packs so I settled for Especiale which is almost as good.

I spent a couple of hours with Doris and Wayne, then went to a great Thai restaurant for Panang curry- 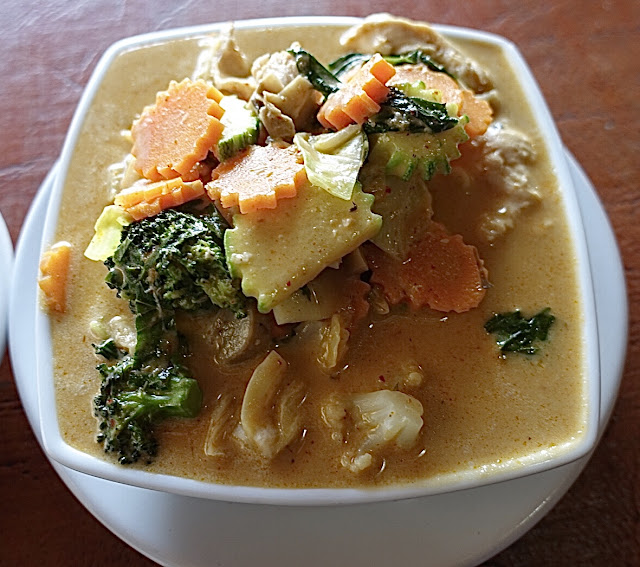 I’m in my room and there is live music playing, it sounds like they’re under my bed they’re that close.  They’re playing Goldie oldies and so far I don’t mind.  They started at 7 and due to the age of the audience, it will likely end by 9!
I’m catching an early bus on the street corner to go to the airport as soon as there’s daylight.  I get to Puerto Vallarta at 11:30, hope to check in, get to Walmart to buy groceries, then get back to the airport for 4 pm!  Looking forward to seeing Jane, Nico and Andi and the next two weeks!
at January 14, 2020