I had a leisurely morning then decided to go to Parque Colomos which is a Japanese Garden.  All I needed to do was walk two blocks, hop on bus 54 or 50 and I’d be there in no time.  Well, luckily I asked the drivers before getting on because none of them went to Colomos.  One driver told me bus 51 did.  Well there was no bus 51 for 45 minutes so eventually I thought I really didn't need to go that badly and walked to the centre.  I bought a couple pounds of coffee from Starbucks so I’m well prepared when Jane comes which is in five sleeps and then I had lunch.  I noticed a sushi restaurant a couple of nights ago because they have a sushi train.  When Nico was sick and we were in Winnipeg, we’d go down to The Forks where they had a sushi train.  He loved sushi!  I wasn’t crazy about it then but it has grown on me.  So, I went in and wouldn’t you know it but it was a buffet so for $14, I paid and shit, what a mistake.  Everything on the ‘train’ was a California roll with a different garnish.  Then, the buffet - I hate buffets, was cold.  Everything was freezing cold.  I asked the worker for some hot fries and all he did was reheat some - they were bad.  They had pretty large shrimp but you had to peel them.  I ate a bit of this and a bit of that, certainly not my money’s worth.  The best part was the raspberry ice cream, although it had thawed and been refrozen - you know how ice cream gets crystally when that happens.  There were five different kinds of cookies and they were the best part of the whole meal.  Very disappointing.

My next stop was at the Teatro Degollado which was built in the 19th century.  Thanks to Arturo.e.delarosa for the photo, I forgot to take one- 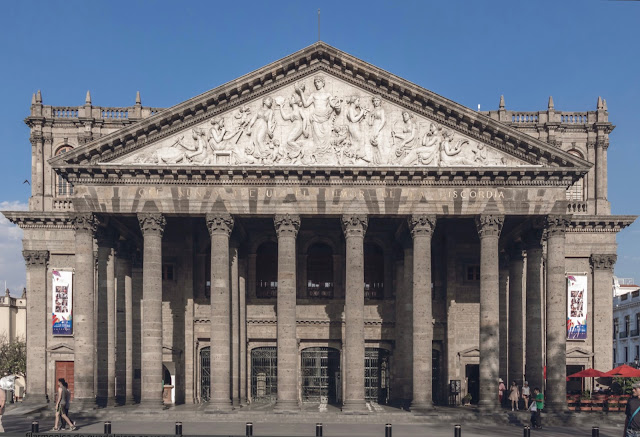 Inside it’s typical for theatres of this time period- 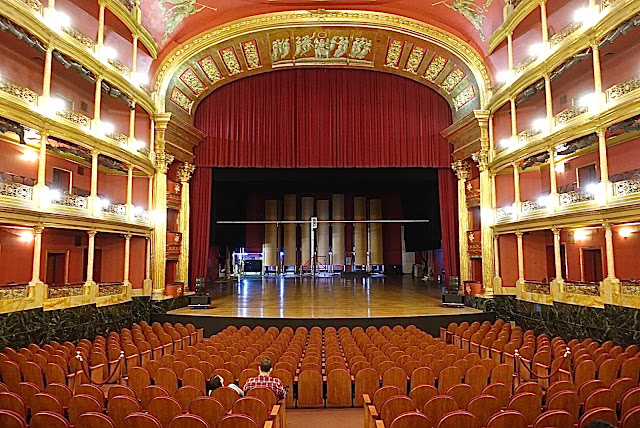 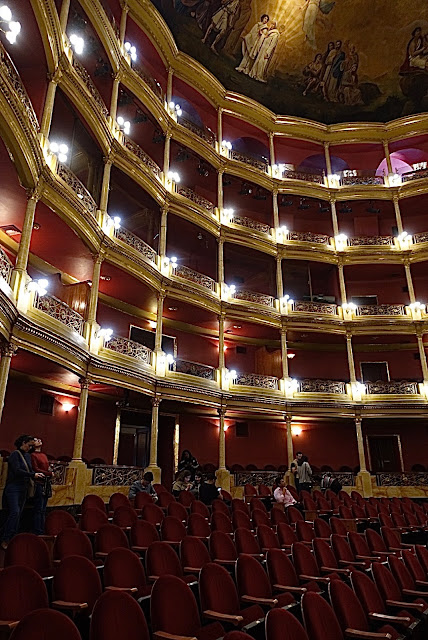 There’s a huge chandelier in the lobby- 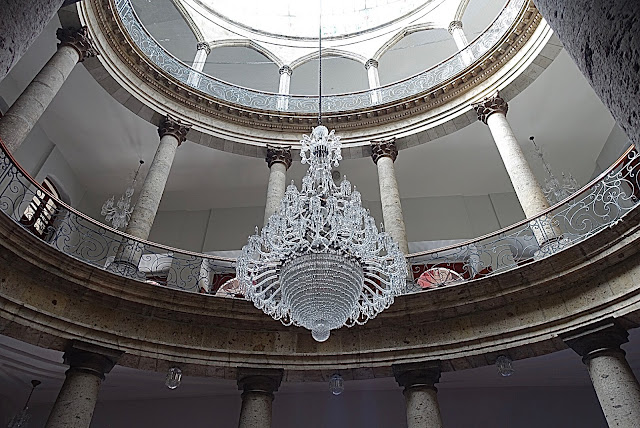 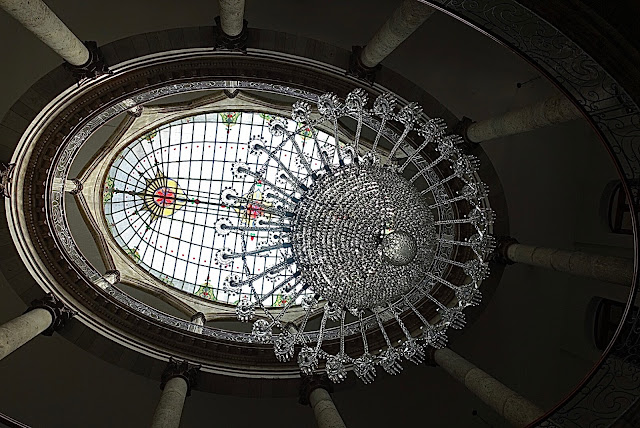 Unfortunately there’s nothing playing until the 19th. I came home and relaxed then decided to go to a movie. I caught the bus to ‘modern’ Guadalajara which is like any large Canadian city.  I paid for El Faro - The Lighthouse.  I have had the chance to see it in a few places but it’s been my second choice so thought I’d watch it today. Well, it’s black and white and takes place in the ‘olden’ days.  The men in it don’t really talk and the old guy who does has a Scottish accent that I could hardly understand so after 10 minutes I thought - I’m out of here.  Life is too short to watch bad movies.  I wandered around the theatre looking for It’s a Beautiful Day in the Neighbourhood because that started half an hour later.  I went into a few theatres looking for something in English and just starting.  I thought I’d found it and asked a man who was deaf - he pointed to his ear for me to talk directly into it.  He said I was in the right place so I found a seat and the movie started.  It turned out to be Richard Jewell which I’d already seen.  Eventually I found the right place.  The movie has a good message - love, forgiveness, patience, acknowledging feelings, accepting people for who they are at this moment in time and being present but I found it a little slow.  Anyway, it was something to do.  I caught a speedy bus home and enjoyed my walk in the dark. I don’t go out much at night - I’m usually pretty tired from being out during the day, I don’t eat supper and it’s a drag going to a bar in the night by yourself.  The city is hopping!  There are drummers in the park, more traffic than in the day and people out and about everywhere.

Tomorrow I’m going to try to get the right bus to Parque Colomos and maybe go to a big shopping mall, just to see.  There’s a Harley Davidson store near it that I’ll probably check out.  Looking forward to another warm day.  It’s -40 at home with the wind! 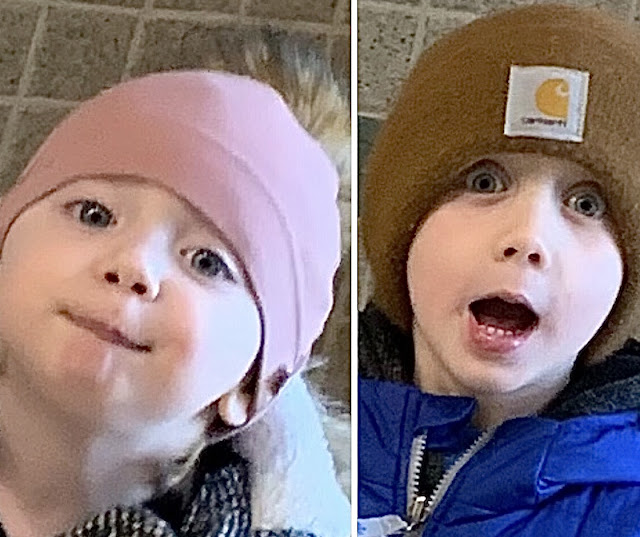