I was up early of course and had to use the hotspot on my phone to read the paper.  The wonderful Internet I had the first night I was here has mysteriously disappeared.  This is the first place I’ve rented that doesn’t have Wifi in the room.  It’s a requirement for me and has been a big surprise that so many places provide it.  When I was booking in Manzanillo, there was a place right on the beach that looked gorgeous but no Wifi.  The owner said she had tried it but the service was so poor she cancelled her plan. At least here, I have the option to come down to the lobby where there are comfortable enough chairs and it’s close to my room. I can suck it up!

Later, I went walking.  I ran into Claudette Jamieson who was biking so we had a visit, then heard “camarones, blah, blah, blah“ and found a man selling huge shrimp from the back of his truck.  I bought 1/2 a kilo for $7.  I stopped in at Amy and Karen Williams’ hotel but according to their neighbours, they were gone playing pickle ball so I carried on to Los Ayala, the neighbouring village to the west.  It’s set in a small, lovely cove- 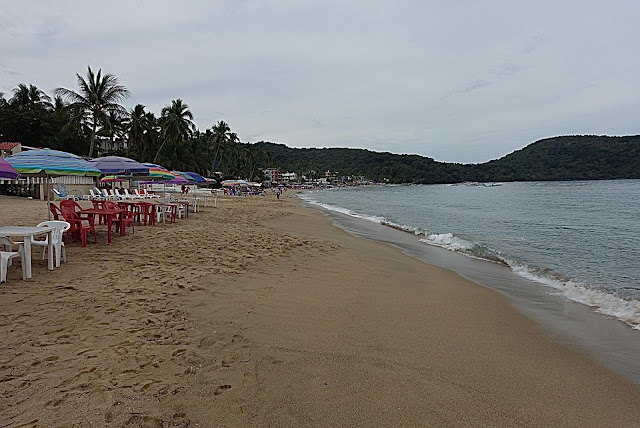 There were many restaurants set up on the beach but few people so early.  There were also pelicans stealing cooked shrimp from barbecue stands and hanging out.  They obviously art well looked after- 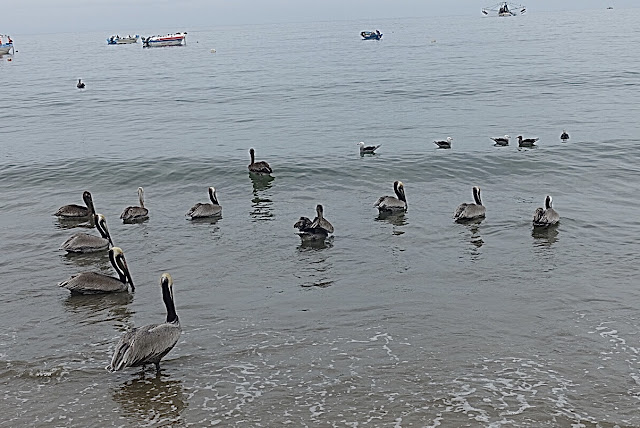 At the end of the beach is a cement ramp where people were coming down so I asked if there was a trail.  A man, who wore a hiking club t-shirt, explained about gates and signs and paths and blah blah blah.  All I remembered was to go left.  The walk took about 45 minutes through the jungle- 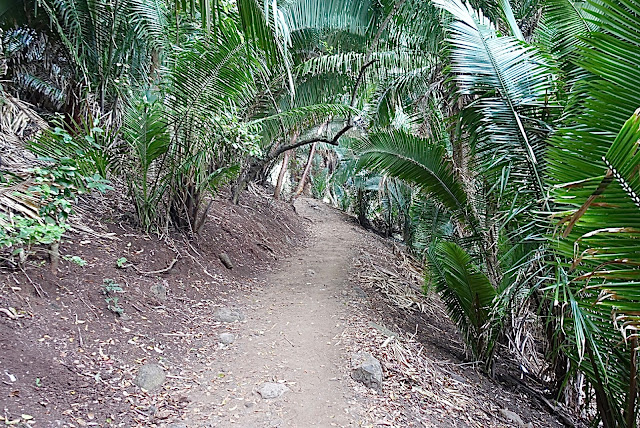 It was quiet and I was the only one on the path.  I eventually looped around and ended back at the town from where I took a combi back to my place.

Lunch was a taco on the street.  I spent about an hour by the pool and met a couple more people in my hotel - Leslie from Kelowna and Charlene from Calgary.  Leslie is very grumpy and Charlene is working here vis her computer for three months.

Everyday at 1:20, English movies are shown at the cinema so I met Amy and Karen there to see 1917.  It was very good and I highly recommend seeing it.  It’s about two young soldiers who are given a mission to travel through No Man’s Land and then a few kilometres more to reach The Devons, another regiment, who are planning an attack in the morning on the Germans but that attack must be stopped.  The film has been nominated for quite a few Oscars so it will be interesting to see those results.

After the movie, I went to Amy and Karen’s for a couple beer, then came home and read my book.  It’s called Heartland by Sarah Smarsh and it’s a memoir about “working hard and being broke in the Richest Country on Earth”.  It’s a bunch of whining if you ask me - she’s a third generation teenage pregnancy from a lineage of non educated but hard working, physically abusive heavy drinkers from Kansas.  One thing that I do find disturbing though are her accounts of hospital stays and necessary visits to the doctor.  These are put on hold until the absolute last minute because of the prohibitive costs.  That’s something I tend to take for granted in Canada and even though our wait times can be long, I won’t be bankrupt after a procedure.

Looking forward to tomorrow - if the sun is shining I’ll go to the beach. I might also take in another movie - Little Women and Bombshell are both playing.