What a weird night.  I slept well, in spite of the raging music from the bar below, until 2 am and then I guess it was time to get up.  I didn’t but tossed and turned until 6:30. I was sleeping on a box spring.  A box spring!  WTF?  Also, there was no toilet paper in the bathrooms and no hot water. I texted Christian, my landlord, to tell him I needed a change - he rents numerous rooms and in no time, he had a me moved to a new place that looks a lot like the old place - he loves decorating in blues, whites and lime green- 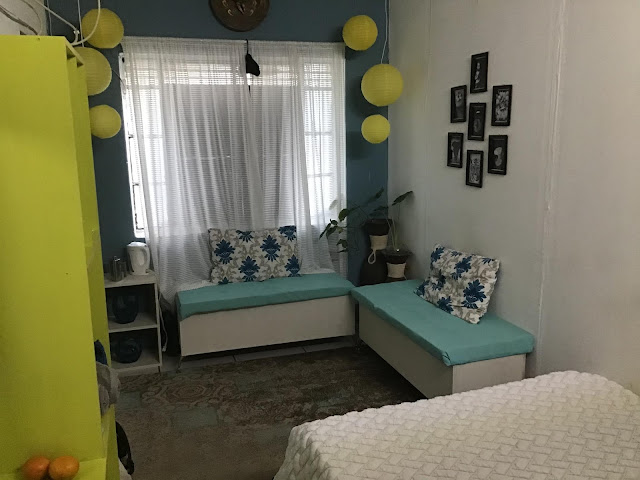 I do have a mattress to sleep on although he’s left the plastic on it.  He said he was told to do that so maybe he wouldn’t get bed bugs.  Anyway...
He showed me all the little knickknacks (tackier than hell shit) that he’s bought - painted plaster cats, dogs, dancers, etc, that he plans to nail up on the walls. Whatever.  All that matters to me is that I’m on a much quieter street, I still have an outside window and hopefully there’s hot water.  He did install a new electric shower head today so here’s hoping. There are 8 bedrooms in this apartment and Christian himself lives here.  He also showed me the best place in town for tortes ahogados - drowned sandwiches so that’s what I had for lunch- 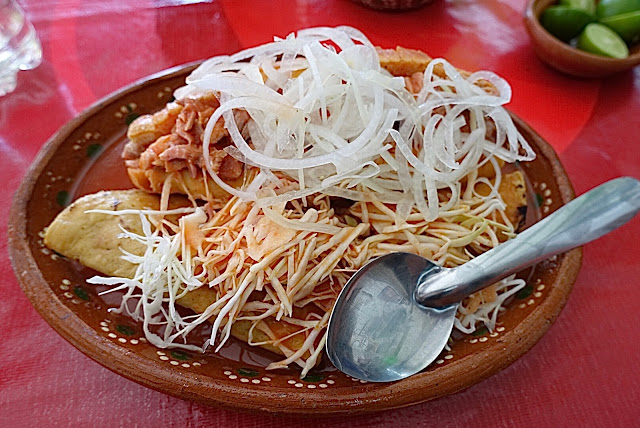 It’s roasted pork in a super fresh baguette, smothered in onions and shredded cabbage and covered with a spicy tomato sauce.  They also include tacos dorado which are crispy tacos stuffed with something.  It was very good and I’ll go back - all for $3. 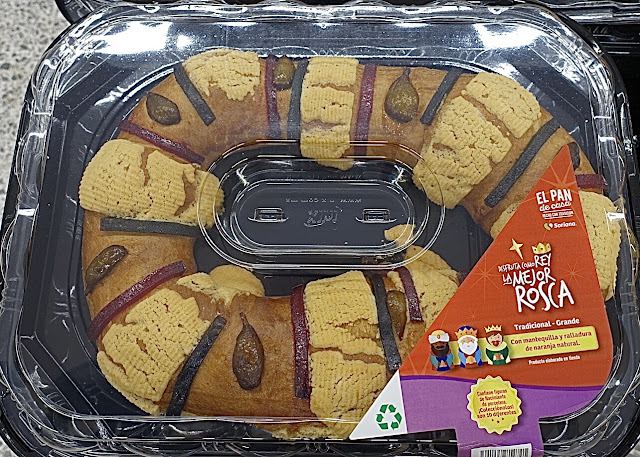 It has a bean buried in it somewhere and the person who finds it has special privileges.  Some people say that person is in charge of buying the next cake.  Epiphany also signifies the beginning of Carnaval which carries on until Ash Wednesday which starts the season of Lent.

Today was a wandering day because I’m still not feeling that great so didn’t want to be hopping on a bus and heading out of town.  There are four plazas connected in El Centro with huge buildings around all of them.  The Plaza de Armas used to be a garbage dump and a horse carriage parking lot.  The first bullfight was here in 1611 (unfortunately that’s a thing of the past in Guadalajara.  I knew I missed my chance in San Miguel).  In 1630 it was cleaned up, stoned and a cistern and the first fountain of the city was built later in 1643. 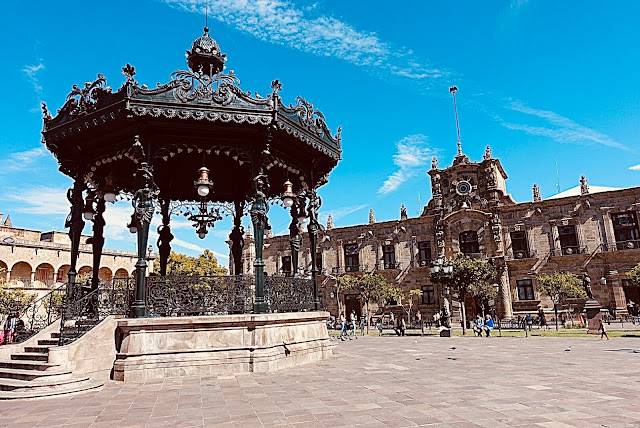 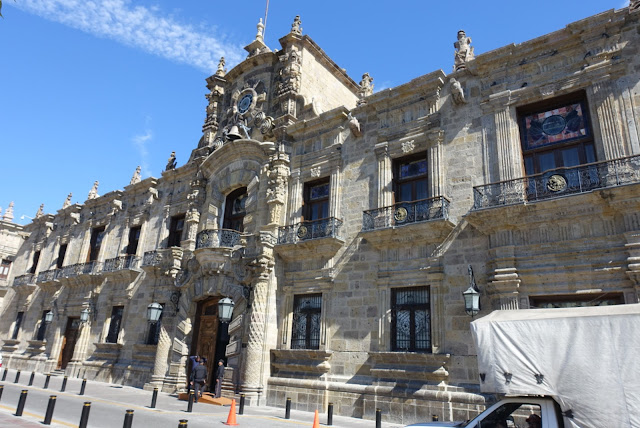 main attraction is the huge mural painting in the staircase by José Clemente Orozco of Hidalgo, Mexico’s liberator.  Hidalgo is holding a torch against evil- 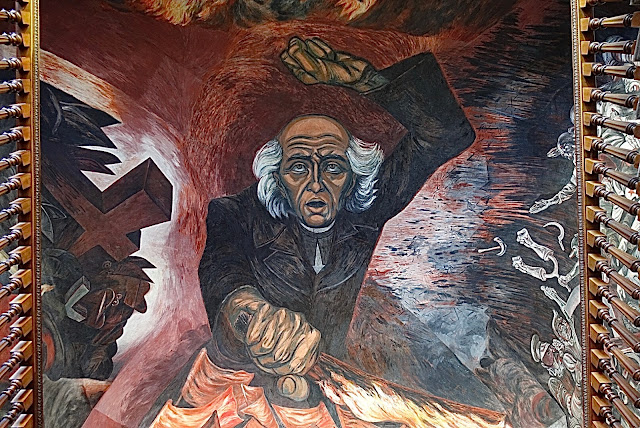 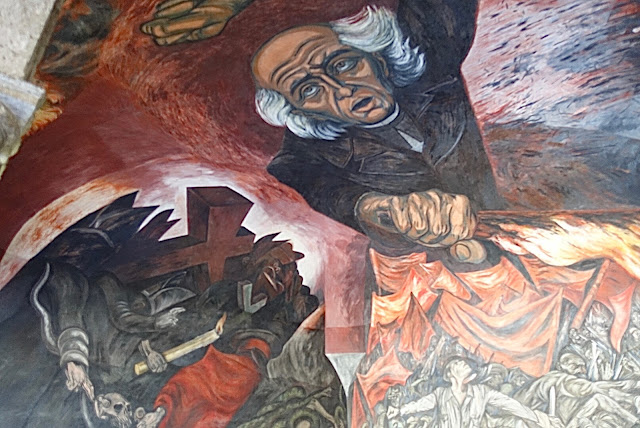 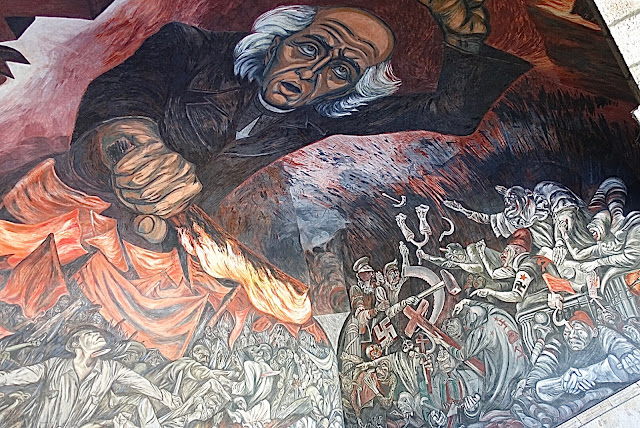 On the other side of the Plaza is the Sagrario Metropolitano, the first Catholic Church in the city- 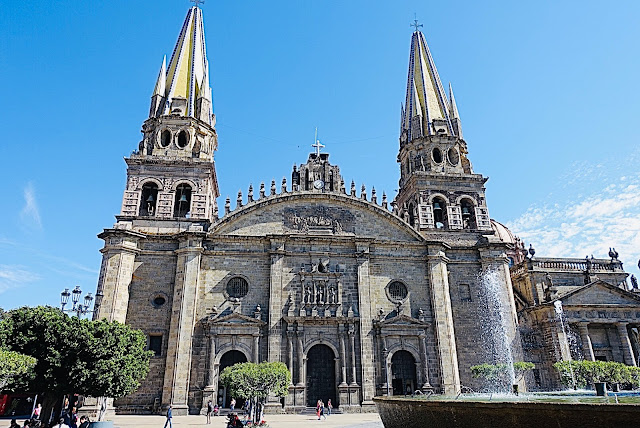 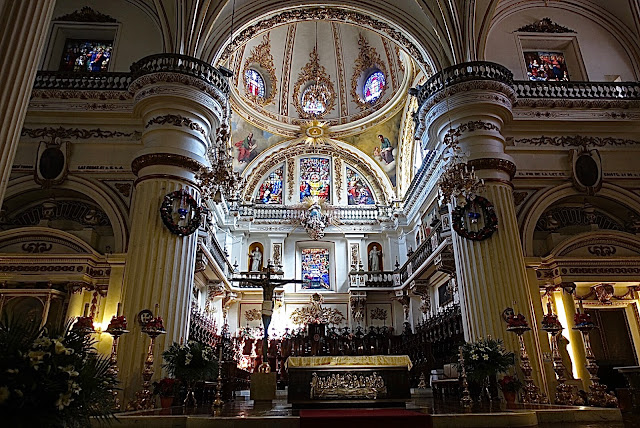 In the Plaza de la Liberacion is a great fountain- 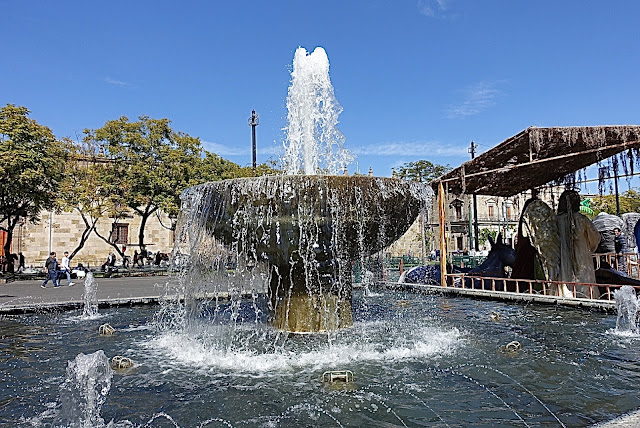 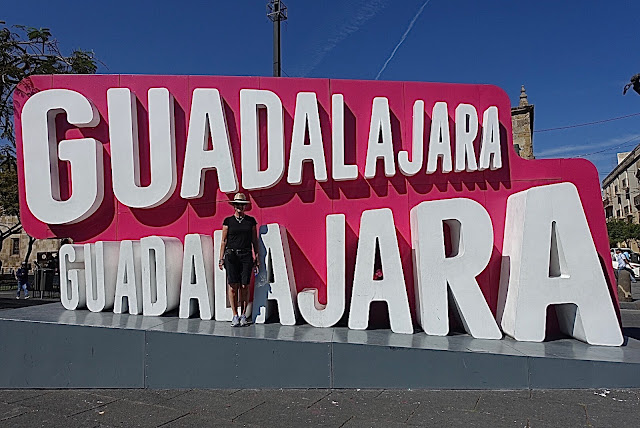 And another monument to Hidalgo- 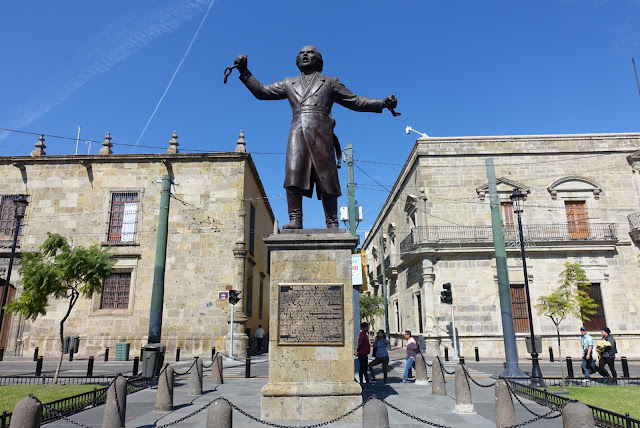 Continuing on is another fountain and el Teatro Degollado- 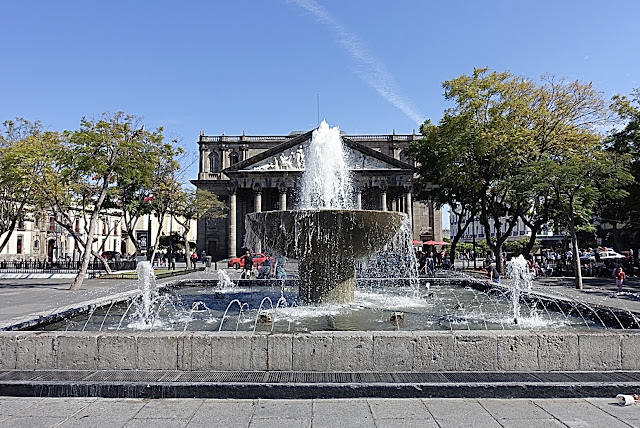 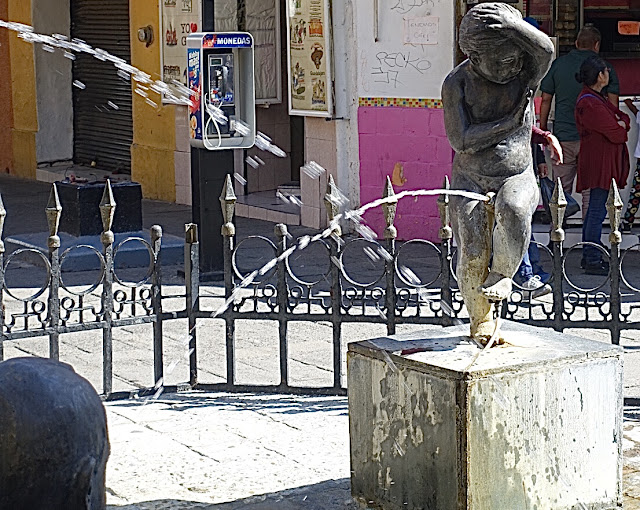 There were modern fountains and many statues along the way.  At the end of Hidalgo were four brass sculptures called La noche de los magos (the night of the wizards)- 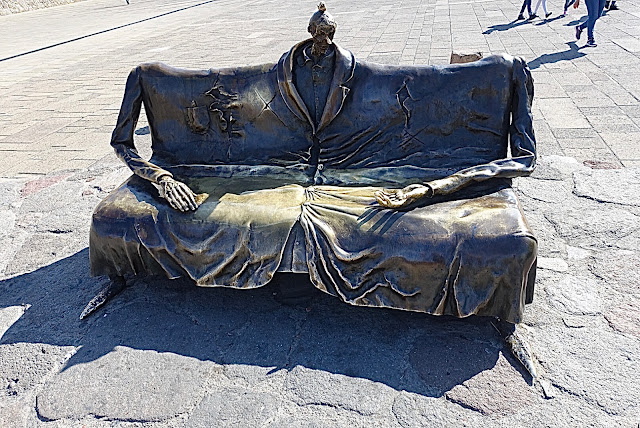 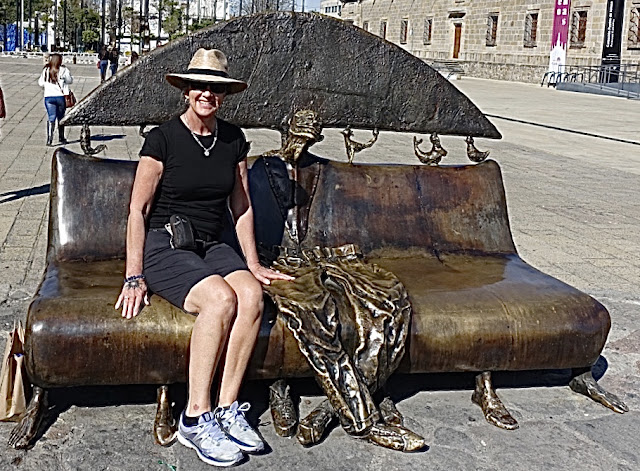 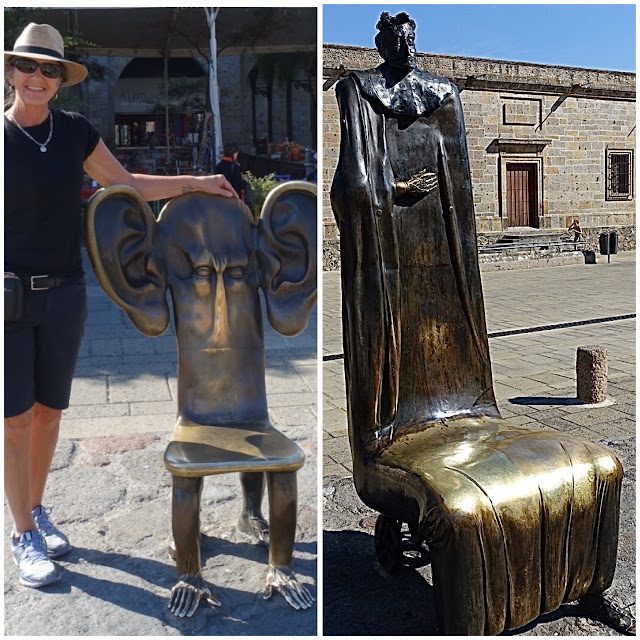 Walking back, I stopped at TelCel to see what the problem is with my phone.  Roberto said when I paid 200 pesos in Querétero at the Oxxo, the woman didn’t credit my phone. I thought that was a bit strange but whatever. He told me I had to pay another 200 so I did.  My phone still wouldn’t work so he took it into the back to an engineer.  I was very uncomfortable with this because there’s a lot of personal information on my phone and I wasn’t there to see what he was doing.  Anyway, eventually he came back and said they had to change the SIM card and now it worked but that I had double credit because the cashier at the OXXO did credit me but the chip malfunctioned.  I have to trust that Roberto would not compromise his position by writing down some of my account information etc.  Time will tell I guess but the good news is that my phone works With cellular service.

I also stopped on a cambio street. It’s funny how there will be a block of cell phone stores, then a block of running shoe stores and a block of cambio shops, all offering the same shitty exchange rate.  Today for $100 US, I could only get 1800 pesos. I’ve gotten as much as 1850 before, I guess that’s not that big of a deal, only a loss of $3.44. However, the Canadian dollar has done wonders. Today it was trading at 14.30 pesos and the best I’ve seen before is 13.80.  I wish I had more Canadian money along.


Another monument along the way is Dos Leones y un Arbol (Two lions and a tree) which is the Coat of Arms of Guadalajara. Here we see two rampant lions posing on an oak tree in victory. In 1539, Guadalajara was granted the title of city by King Carlos I of Spain and V of Germany and this coat of arms- 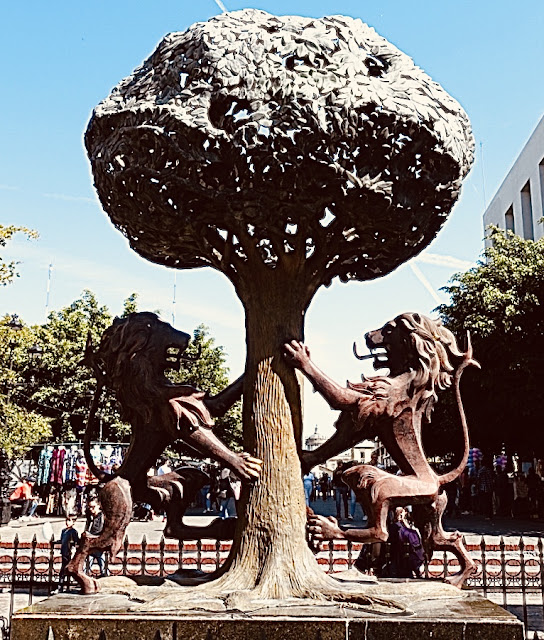 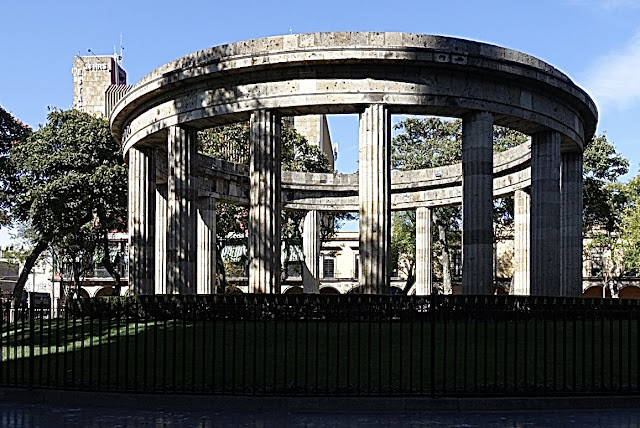 commemorates the many famous people from Guadalajara and the outside of the park, one block square, is lined with statues of poets, authors, actors, etc- 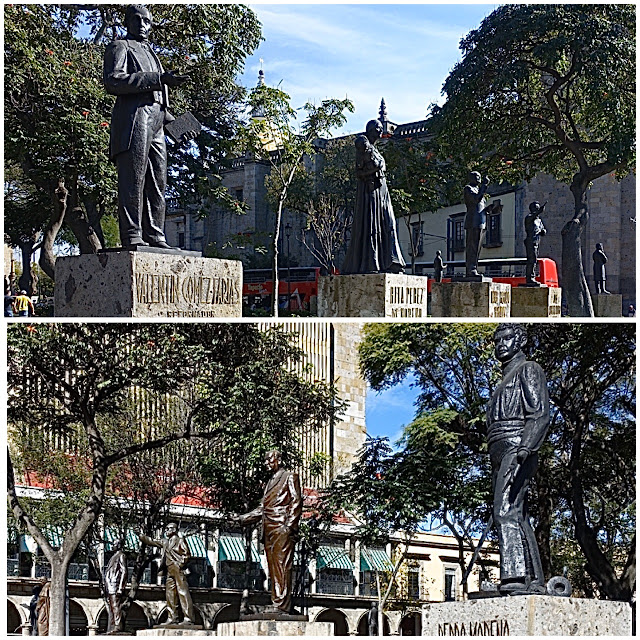 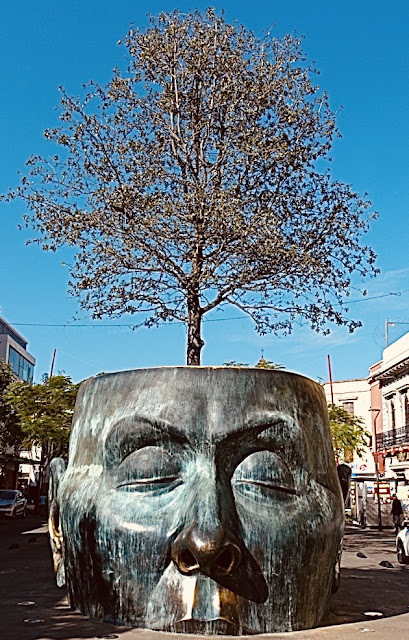 It’s possible to walk up the back and stand in his head.

I had a good day and probably will go on a walking tour in the morning, then visit a couple of museums.  I like Guadalajara - it’s a huge, modern city, fairly clean and the temperature is perfect.
at January 06, 2020