We had another early start because we had a really long drive ahead.  Our goal was San Pedro de Atacama, which at lower altitude would be nice and warm.  If we didin't make it, we were looking at a high altitude bush camp with possible minus temperatures!  In a tent, that's not too nice!
The scenery has been unbelievable along the way- 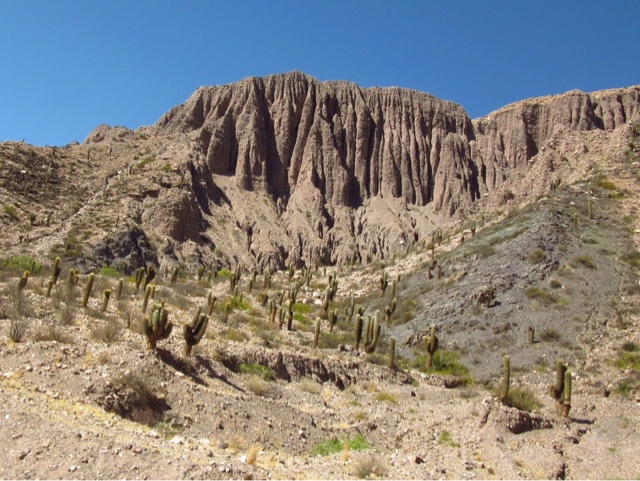 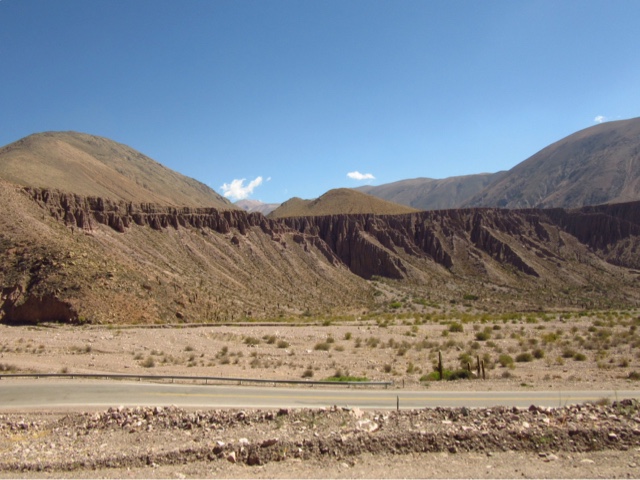 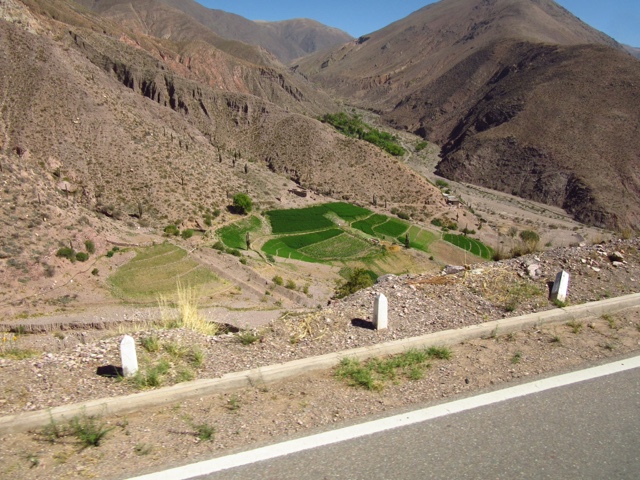 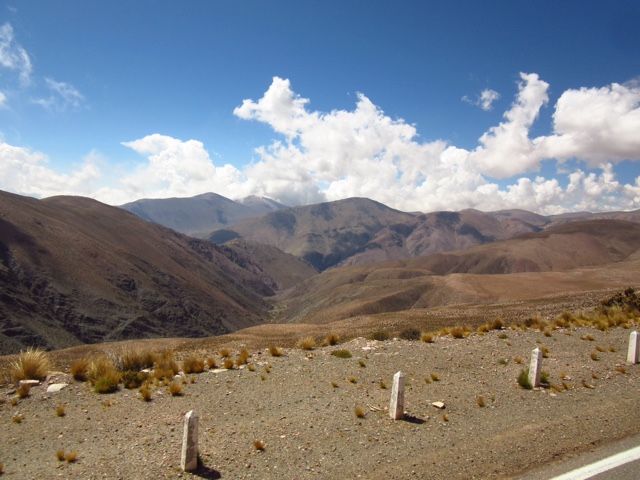 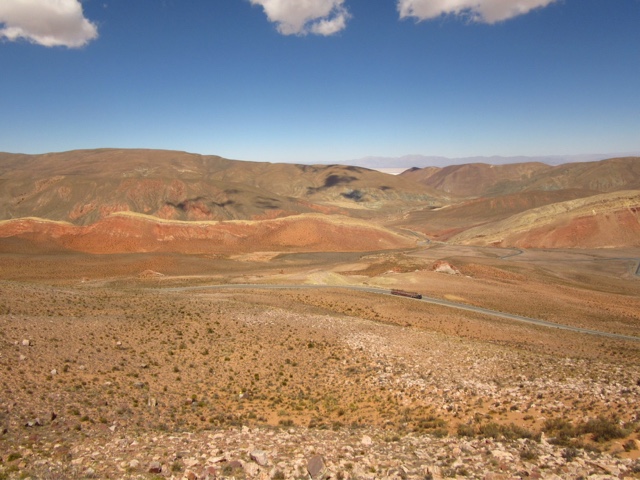 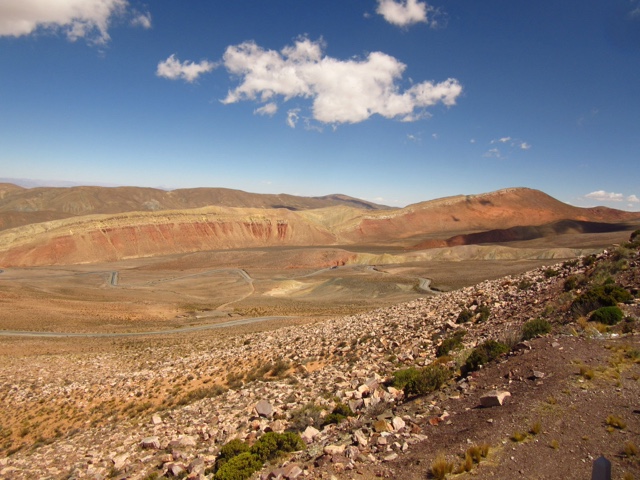 We stopped at Salinas Grandes (3550m) which boasts a dried up salt lake that's 525 square kilometers.  It was nothing after having visited Uyuni in Bolivia- 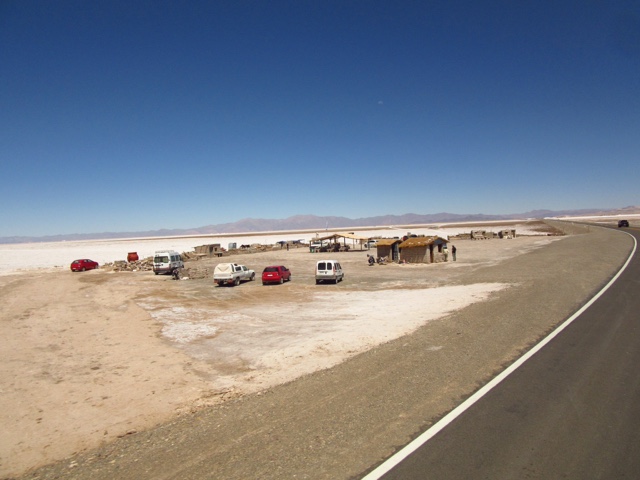 It did seem in the middle of nowhere- 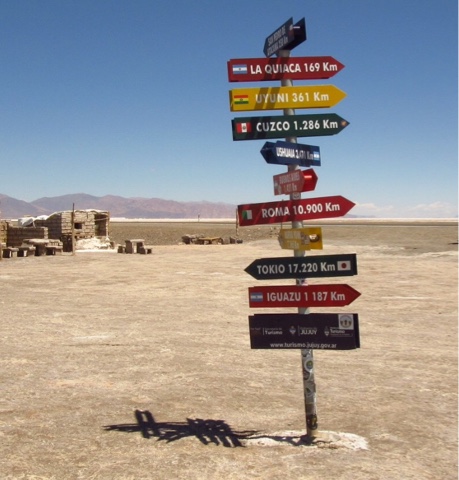 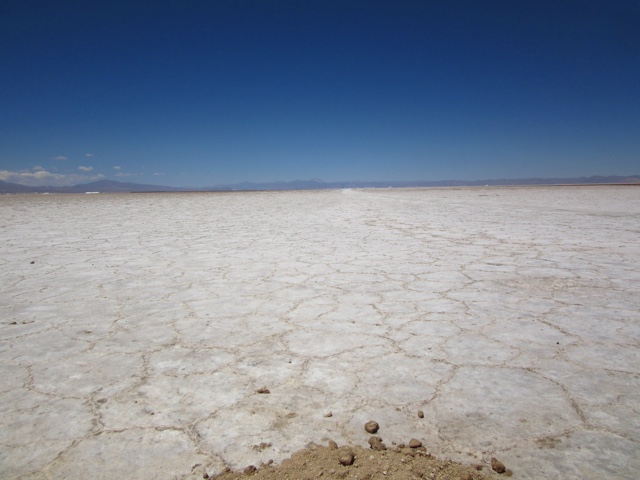 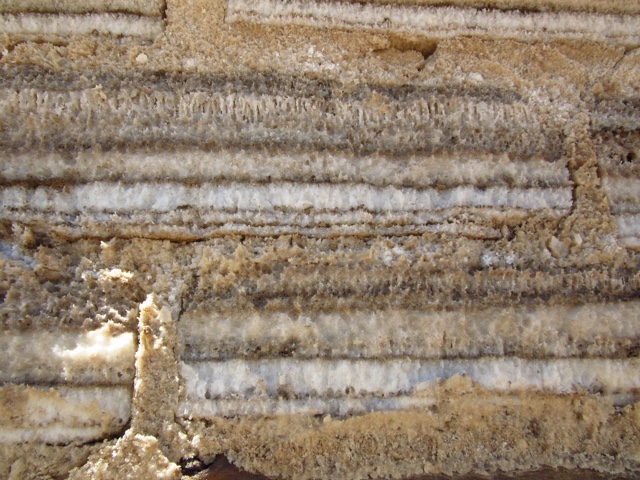 We continued on to Susques for lunch.  It's like a town out of a Wild West movie- 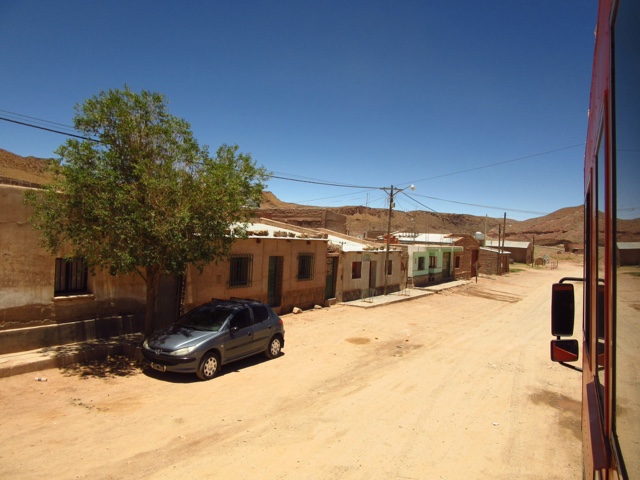 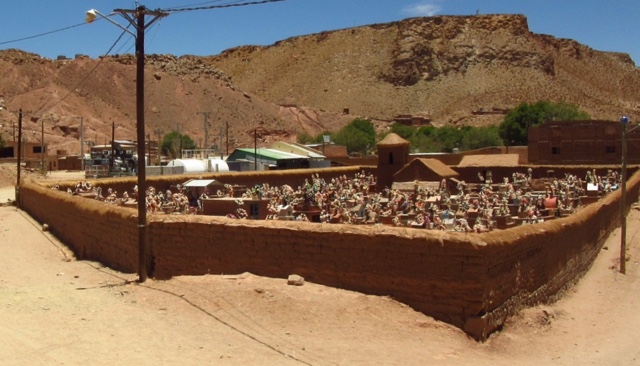 is well cared for.  The gate was locked and a man in a nearby office told me I could find the woman with the key if I walked two blocks this way, then left another block or too.  Luckily I could peek over the fence- 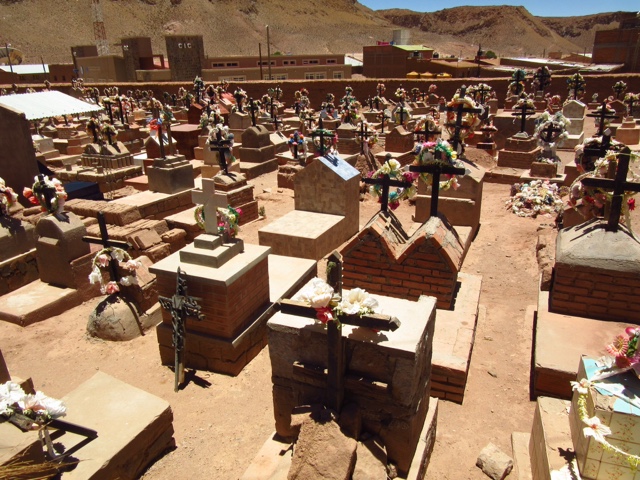 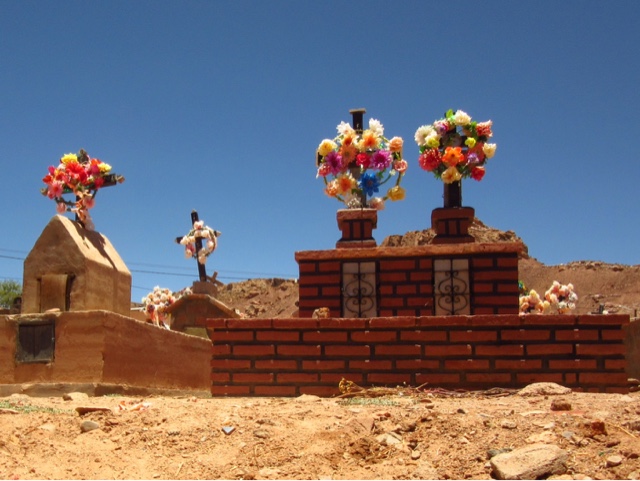 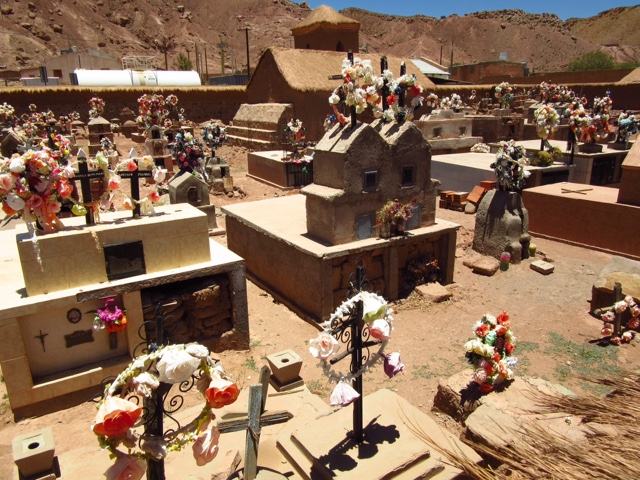 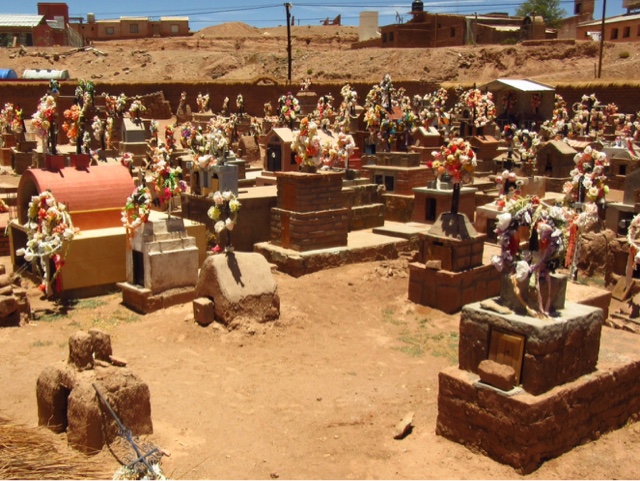 Surprisingly I had a great Milanese for lunch, it's like schnitzel, and we carried on.  More great scenery- 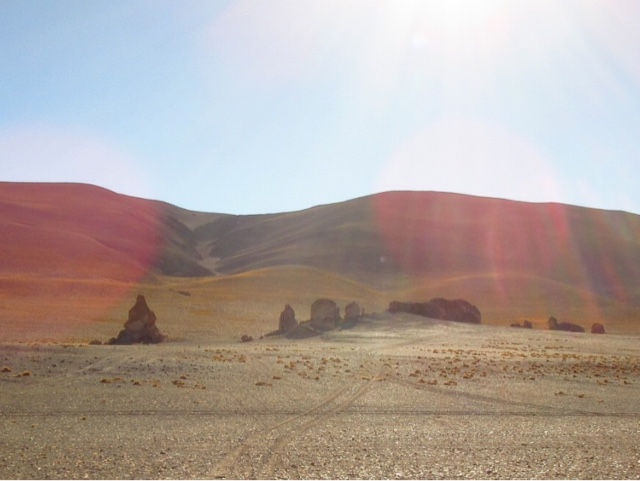 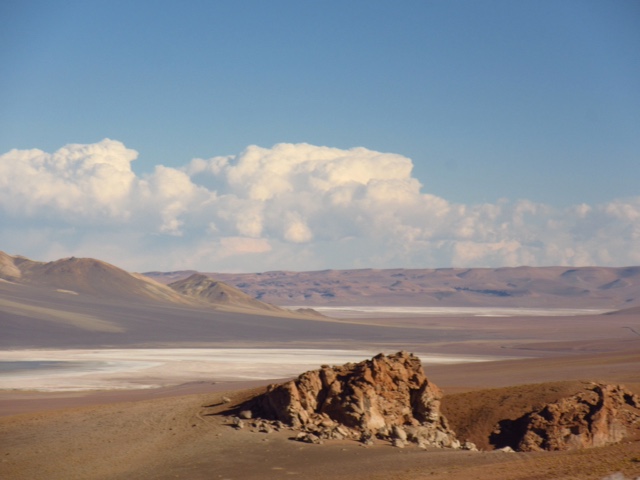 We crossed the border into Chile at Paso de Jama (4230 m) where we got the Argentinian departure stamp and Chilean entry stamp in the same building.  All our bags had to be X rayed and the truck was searched.  We lost our eggs and fresh vegetables.  Dario's IPhone was in the charging bay on the truck and was stolen by a border guard!  We have to be so careful.  I'm petrified I'm going to lose my IPad.  My life is on it and I'm not sure what I'd do!
We're at the Argentinian border, entering Chile, with Bolivia on the top left- 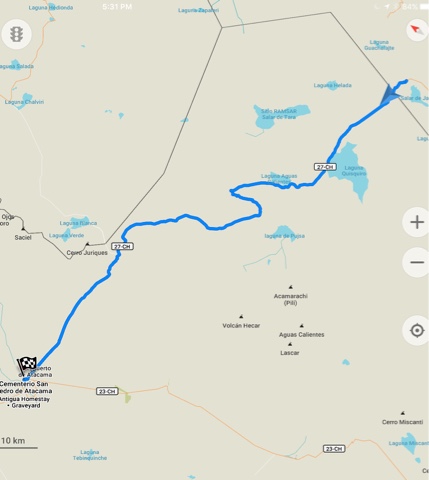 We kept driving and came to dormant Volcán Llullaillaco (6723m).  It's massive- 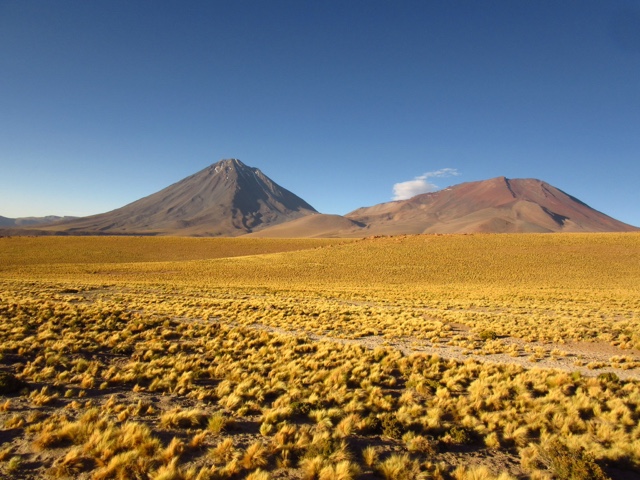 We had to stop on the highway after a long decent because the brakes were smoking and stinking.  We sat for about half an hour while they cooled, then limped to town.  We drove around the town, trying to get down the right street to the campground.  The streets were packed with cars and pedestrians.  For such a small place, it sure attracts the tourists.  Some corners are too sharp for the truck to make the turn.  Ninka had been trying to contact the campground for a few days but they weren't answering.  We finally found it and she knocked on the door - no answer!  She climbed on the truck to tell us we were going to have to leave town to bushcamp when the gates opened!  Jono backed the truck in a narrow gate and we set up our tents in the dark.  Supper was at 10!
Looking forward to a nice relaxing day in adobe Disneyland!
P.S.- 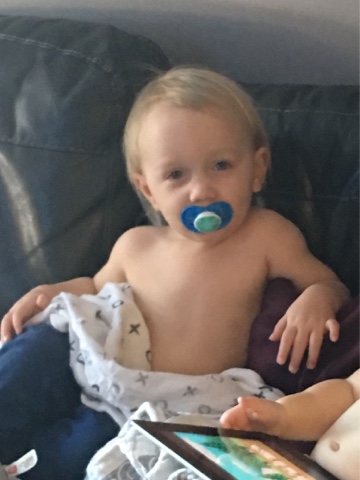