My first stop today was at the Canadian Embassy.  It's in the World Trade Centre, a skyscraper of steel and glass, in a beautifully modern part of Santiago.  I was the first in line and after hearing about my options, which I had already studied on the website, I decided that the temporary passport wouldn't work because it's only 4 pages - (that's what I call temporary!) and I more or less have 4 pages left so  my only true option was to order a new passport, keep my current one until Buenos Aires where my new one will be waiting, then trade in the old for the new.  My only concern is that my Brazil and Paraguay visas, as well as my Argentinian reciprocity fee/tax grab will still be good.  I found out on the Internet that Brazil should be okay but can't find anything about Paraguay.  Who has ever even heard about Paraguay I say?  I spent over $150 US getting the damn visa and we're only going to be there about 5 days.  The whole passport business is such a rip off.  We can get a 5 or 10 year passport with THE SAME NUMBER OF PAGES!  Are you kidding me?  And a lot of countries allow a person to have 2 passports - not us.  So my new passport will be shipped, after 20 working days - come on, even a government office can work faster than that!  Luckily today until January 17, when I arrive in B.A. Is 20 magical days.  At that time I'll have to turn in my old passport to have the corner clipped, signifying it's expired and then, only then will they hand over my new one.  And, I had to sign my life away and pay $45 to keep my current passport for a month.  Whatever.  I'm not beating myself up because I know I should have gotten a new passport this past May - so let it go.  It probably cost me an extra hundred dollars and I'm not sure about my visas.  Oh well, let's wait and see what happens.

A cake shop along the way - a black tuxedo, a mouse and cheese, Santa in a jacuzzi and Feliz Navidad- 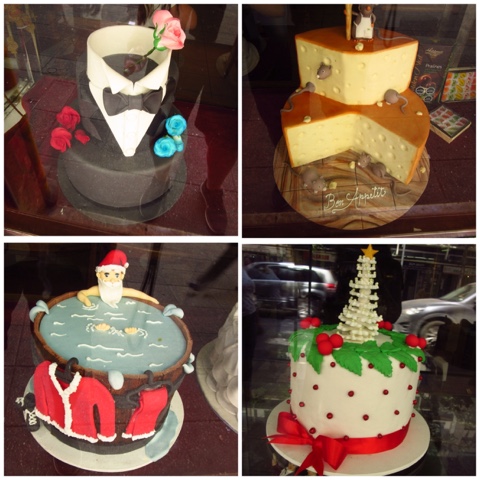 This afternoon, Richard and I went to the Concha y Toro Viña.  It was such an awesome opportunity to visit a winery of actual wine I drink- 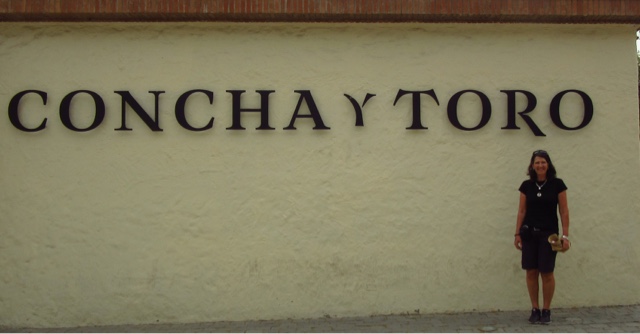 Of course, we had to sample some before our tour- 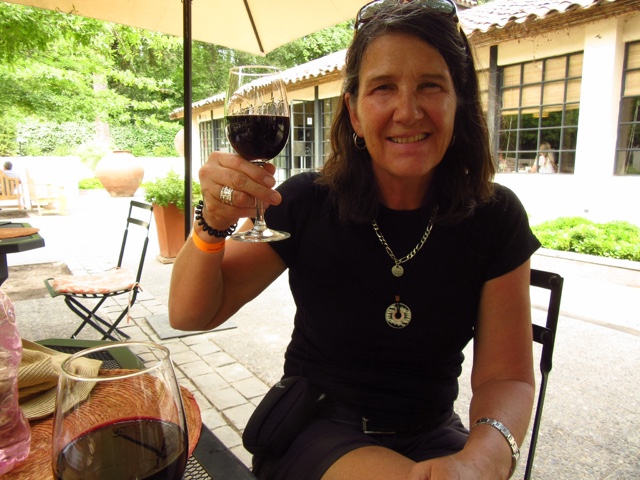 The 'family' started the winery in 1883 and built this lovely 4000 square foot home.  Today, it's used for offices- 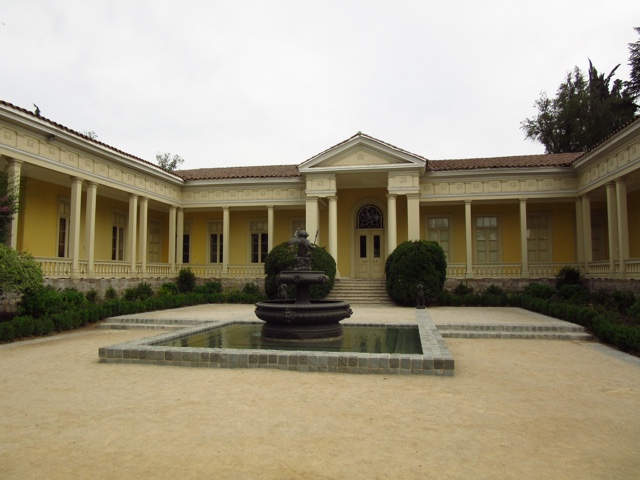 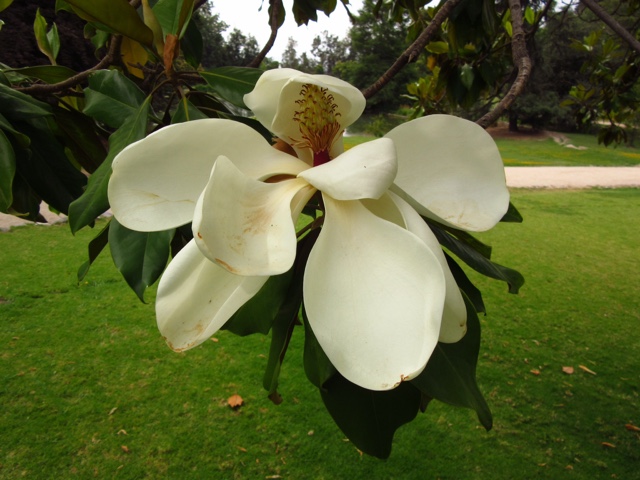 Concha y Toro ships wine to 114 countries and has over 11,000 acres in production, not only in Chile but also in Argentina and the U.S.- 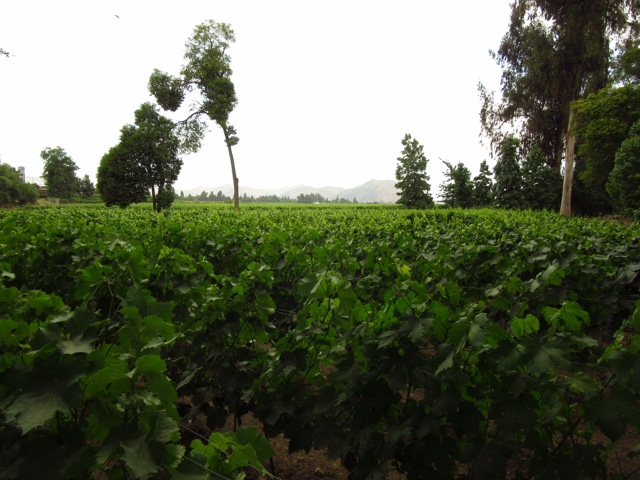 They grow many varieties- 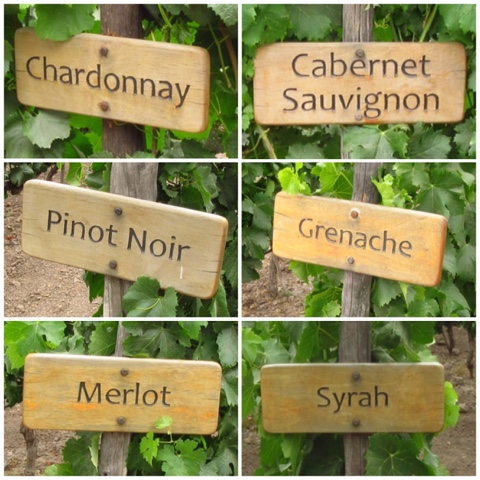 Our guide told us an interesting story about Carmenere.  It's a grape from France that seemed to have disappeared until 1994, when an agronomist visited the Concho y Toro vineyards and discovered a vine growing amongst the others that was Carmenere.  Since then, they've been producing that wine and labelling it correctly.
We had the opportunity to taste 3 wines- 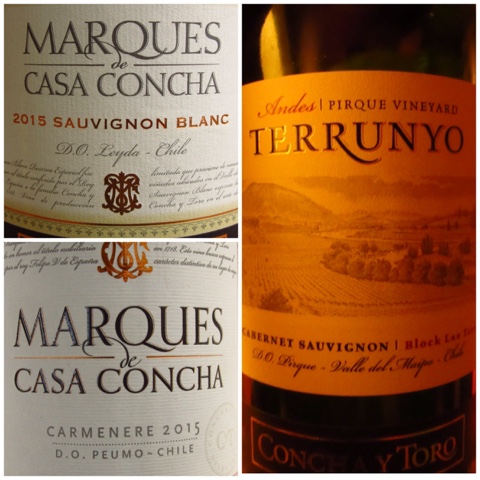 The first was Sauvignon Blanc.  It's a white wine that gets the saliva flowing in the mouth so one is ready to eat.  It's made from the juice of the grapes only - no skin nor seeds.  The newer the white wine, the better, which is the opposite for reds.  Our second tasting was of a Carmenere - the tannins made my tongue do backflips, however it was still very smooth.  The third was a Cabernet Sauvignon - an expensive one that's won awards but I wouldn't pay a nickel for it.  That's the thing - it doesn't matter how much a wine costs, it's how it tastes even - to you.  Another interesting thing was that at Lider, which is South America's Walmart, we pay 3790 pesos for a bottle of Merlot or Cab/Sauv but at the winery, the very same wine was 4200!  Funny.  We got a free wine glass during the tour so hopefully it makes it home.
We visited a modern 'cave' - above ground with machine controlled temperature and humidity- 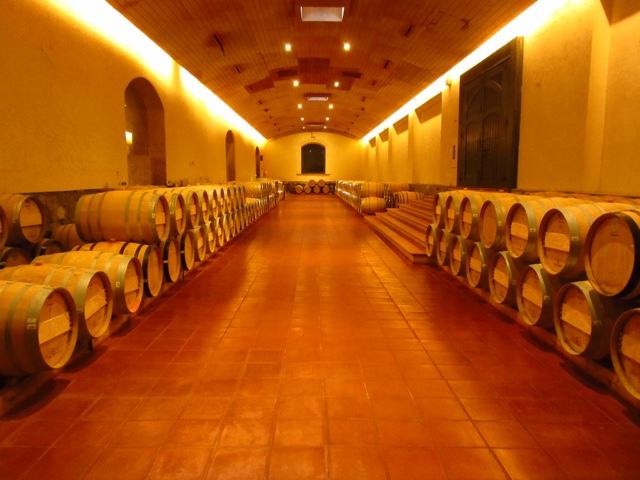 and then visited an original cave with naturally controlled conditions.  The oak barrels hold 300 bottles and come from the U.S. and France.  French barrels cost about $500 US each- 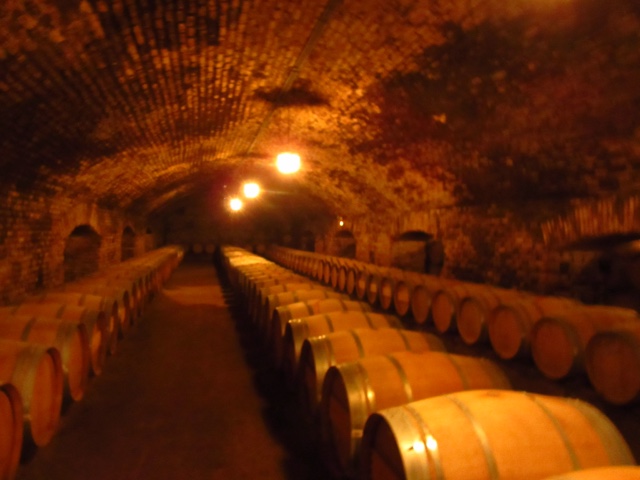 This is where we also heard the legend about the only theft of wine from this viña which involved the devil, hence the name Casillero Del Diablo.  There are over 25,000 special bottles in the families private cellar- 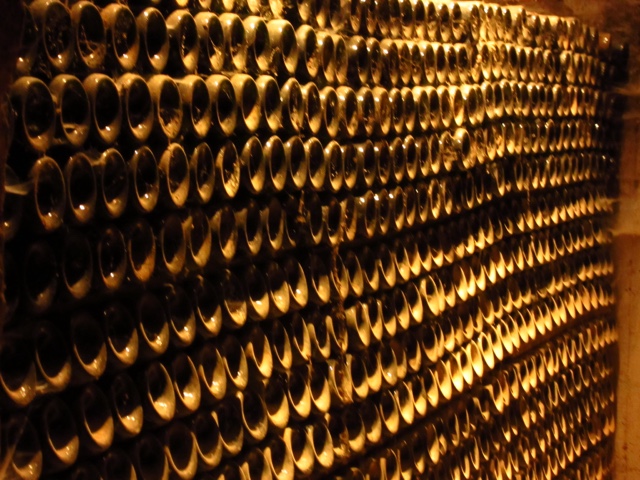 It was a great tour and I'm really glad I went.  On the way home I spotted this drink in a tienda.  I'm going to have to try it-

We have a 6 am start for Pucón tomorrow.  It's going to be a long day!