Yesterday was a relaxing one.  I visited the adobe church- 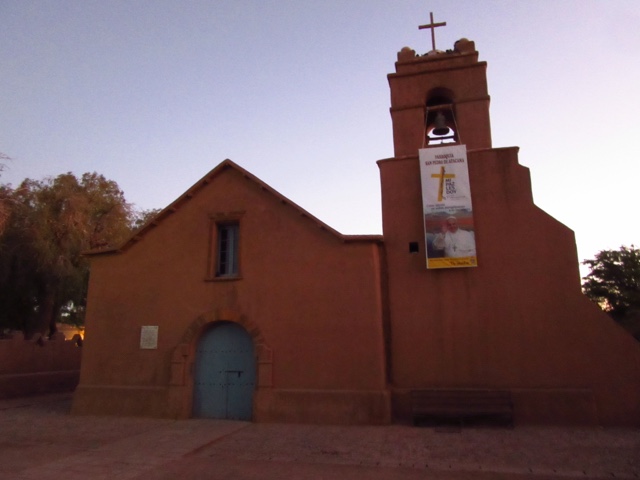 which was completely restored in 2015.  The ceiling is made of cactus wood- 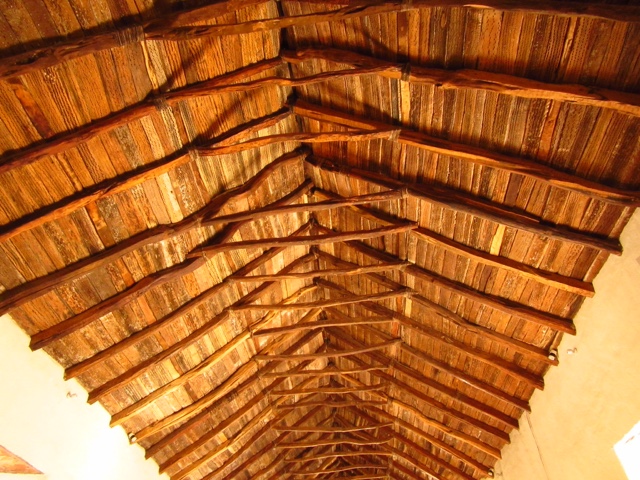 and held together with rubber strapping.  Besides a visit to the Plaza for free wifi, Ninja and I spent the afternoon in the only bar in town, drinking beer with 3 men from Santiago.  I did pretty well understanding what they were saying and explaining myself  but after awhile, it was Spanish overload and I went back to the campsite.  And what a campsite!  There were a million cats and it smelled like it too - nasty.  Because San Pedro de Atacama is the driest desert in the world, the ground was powder and tracked into our tents and covered our clothes.  Water for the showers was heated solarly so you had to plan when you wanted a hot shower.  Sometimes the tanks just ran dry and the water stopped all together.  Oh well, we were in the centre of town and that's what's important.  At 10:30 pm, we left for a stargazing tour.  The sky is huge and dark so it's a great place to look at the stars.  We had a Canadian astrologist who pointed out numerous constellations and stars and recited so many numbers, I don't know how he could keep all of that straight.  One of the stars that makes up Orion is called Beetle Juice and it's about to explode.  That's called a super nova.  They know this because they can tell the makeup of the star and when it becomes mostly iron, it explodes.  Now it's 600 light years away so it'll take awhile to get here and if parts of it fall to Earth, we'll be in big trouble.  Scientists know ways to possibly divert meteors from hitting the Earth; if they know they're on target years in advance.  They might use a mirror to reflect light from the sun onto the meteor to break it up or change its direction.  It wouldn't need to change many degrees to miss the Earth unless it was really close when they discovered it.  He talked about a meteorite that struck Russia recently and how it destroyed part of a city.  A huge one killed the dinosaurs 65 million years ago.  He had a piece of meteorite that was the size of an eraser but really heavy.  He paid $50 US for it.  He also has .005 grams from Mars and .009 grams from the moon.  Each speck cost $100 US.  He talked about galaxies, orbits, planets, spheres, the North and South Poles and black holes.  It was really interesting but my pea brain couldn't retain much of what he said.  After looking at the sky, we had a chance to use 10 different telescopes to look at different stars and formations.  It was great!  It's such another world, one that we tend to ignore because most of the time we can't see it.  We didn't get home until 2 am and had breakfast at 6:30 so it was a short night!
We're bushcamping tonight as we make our way to Pan de Azucar National Park.  Along the way- 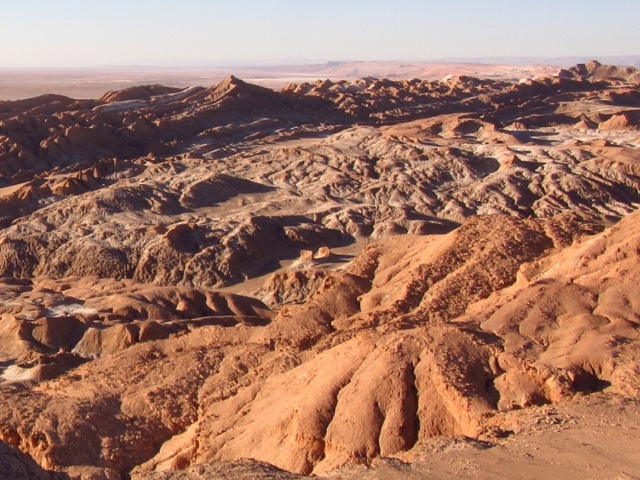 We've got a long way to go- 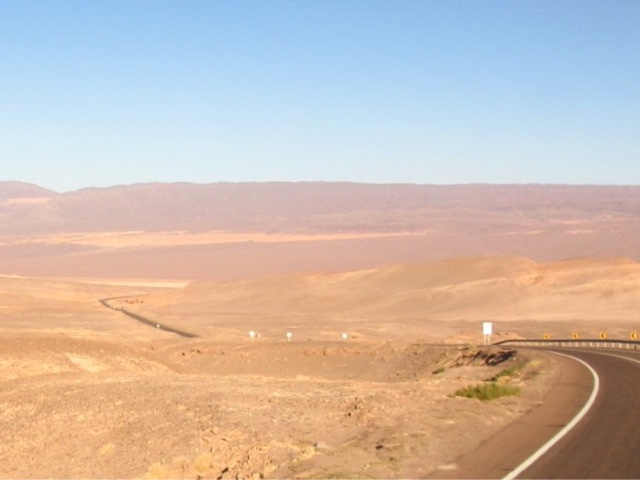 An abandonned adobe town sits in the middle of nowhere.  The roofs were probably thatch because they're long gone as is probably the water.  Seems strange to dessert a whole town- 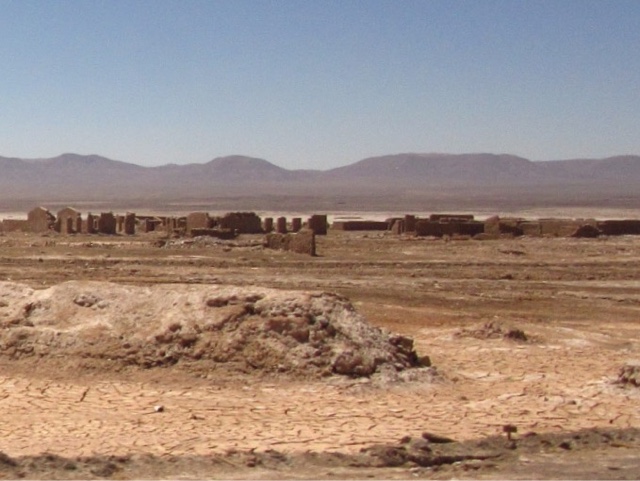 Miles and miles of nothing- 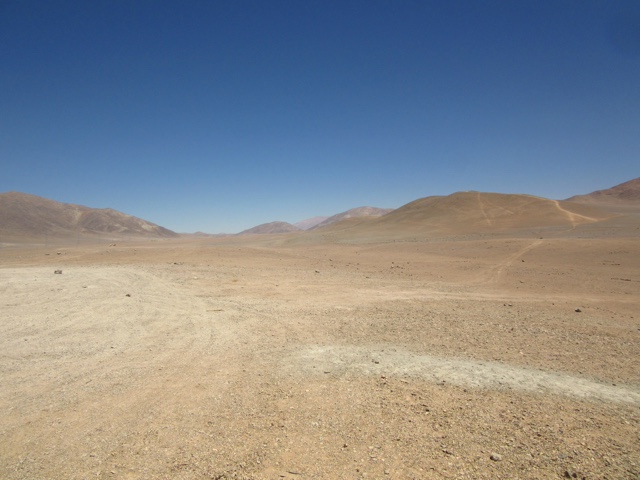 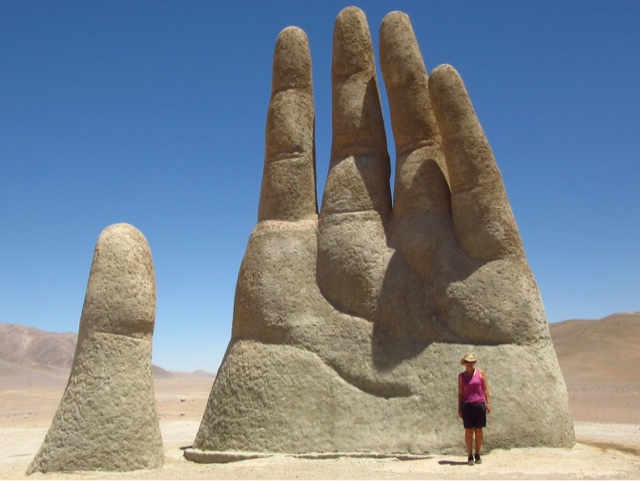 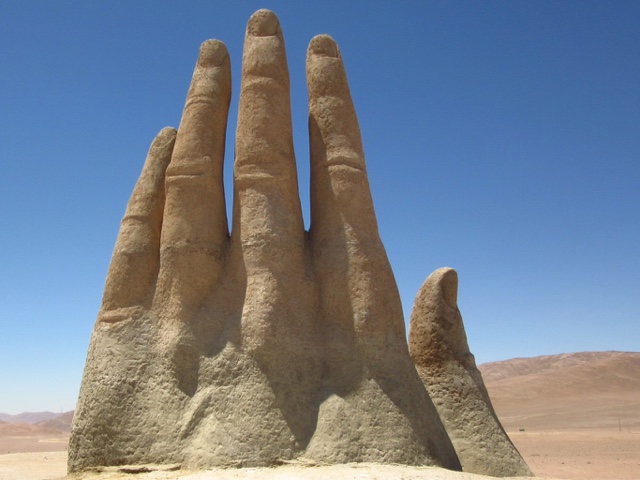 We arrived in a beach town and after running out of gas and rolling into a gas station, we found a place to camp on the beach.  I was in cook group so we had salad and fettuccine Alfredo with chicken.  It was really good, if I do say so for myself.
Looking forward to some sleep, although I know the waves are going to keep me awake!
at December 14, 2017