MERRY CHRISTMAS!!!!!!!!!  I hope everyone has had a great day!  Christmas when you're travelling like this is not the same as when at home.  As a kid, we spent Christmas Day at my Grandpa and Grandma Madsen's house which was only 1.5 miles from my house.  My Uncles Ross and Junior would hook up the horse and sleigh and take us for rides.  We'd play hockey on the slough in the front yard, ride skidoos and build snow forts.  Most of my cousins lived close by: Gary, Leanne, Deborah, Wanda, Kim, Trent, Shawn, Shannon and April, Janelle, Alyssa, Chris, Stephanie and Heather, but the Lees lived in Winnipeg: Doug, David, Kristin and Tim always came for the holidays - Easter, Christmas and summer.  We crowded into the living room to open presents and we played games like Clue at the kitchen table.  There were 34 of us and it was sooo fun.  Since then, as we've grown up, moved away and had our own kids, we spent Christmas in Redvers with my parents.  Lionel would pick me up directly from the Comp with the kids in the car and we'd be off!  The car would be loaded with gifts.  Mom and Dad always decorated their house with all kinds of tinsel and often Carolyn and Dean and their families came too.  As our kids got older and busier, it wasn't always easy to go to Redvers or get together.  Our last Christmas as a family was spent in Pincher Creek at Dean and Tammy's.  Nico was sick and I think it was really sad for everyone but me because I didn't think he was going to die.  We took a lot of pictures and it was a fun time- 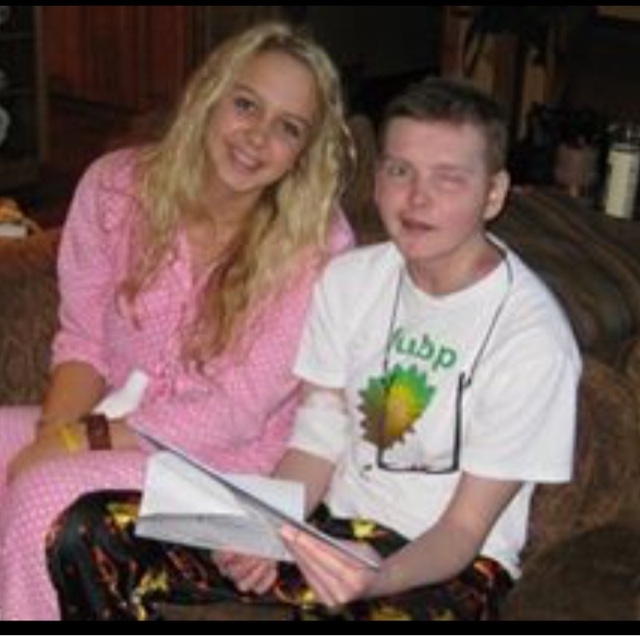 Nico used to help me decorate the tree.  No one else was really interested and I think he just felt sorry for me.  The first 3 years after he died, we didn't have a tree and Christmas didn't seem the same.  The last 4 years I've been travelling and in Asia and Africa, Christmas isn't that big of a deal, or at least it isn't as commercialized as it is at home.  Last year I was lucky to spend it with the Minish family and now this year, well, I'm missing home.  That's interesting for me and a good thing.  I've facetimed everybody and shudder at the thought of the cold: - minus 39 this morning!  Maybe in a couple of years, I'll be home for Christmas!
After a leisurely morning, I went to Cerro Campanario.  Luckily, the B and B owner just happened to be leaving when I was so he gave me a ride to Kilometer 9.  I was going to KM 17 so started walking in between bus stops.  I was pretty proud of myself when some 'tourists' stopped to ask for directions and I could help them - in Spanish too!  A bus went by while I was between stops and even with all my waving, he wouldn't stop.  Asshole.  Eventually I stopped and waited, and waited and waited at a bus stop.  30 minutes later #20 showed up and away I went.
Cerro Campanario is 1049 meters and I hiked it!  It's a narrow, pretty steep and dusty path- 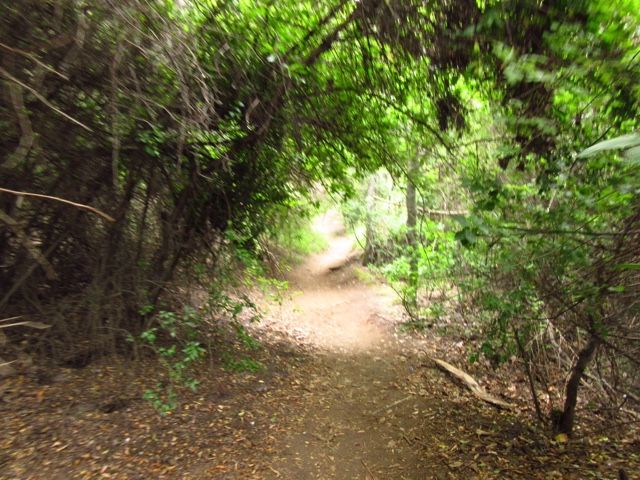 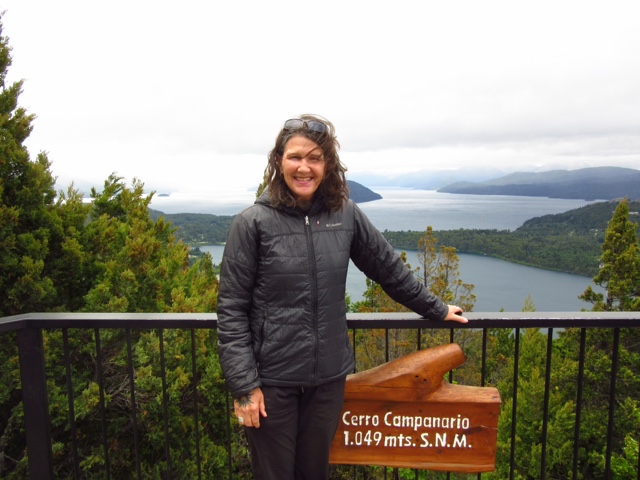 I probably would have taken the chair lift- 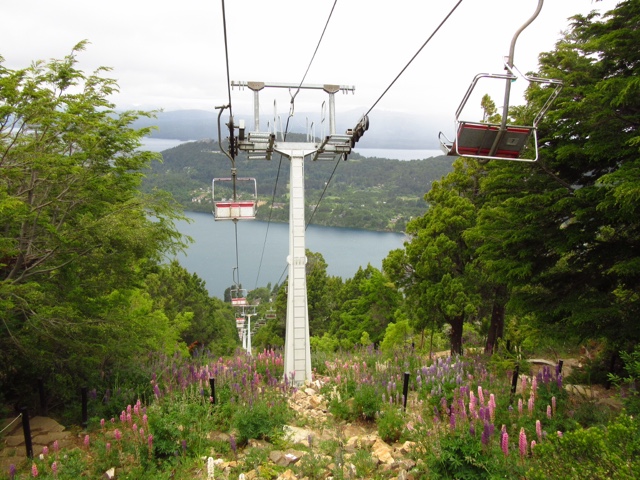 but it was closed.  A good thing I guess because the walk didn't hurt me.  At the top there's a restaurant so I tried a beer brewed just down the road- 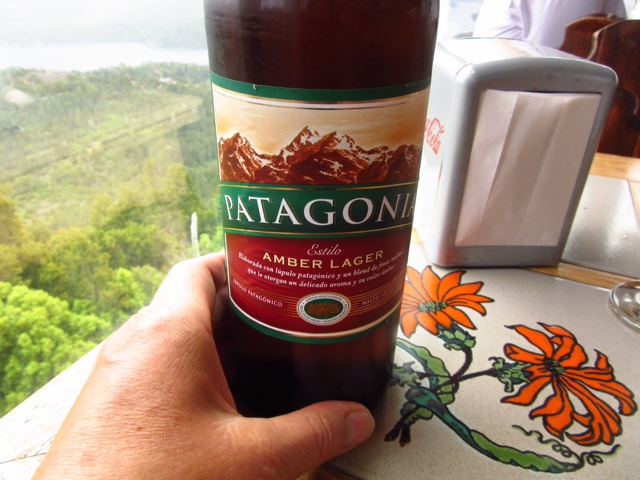 A woman passed me on the trail and we ended up spending an hour visiting, then caught the bus back.  Luca is German but married to an Argentinian.  They spend 3 months in Bariloche and the rest of the time in Düsseldorf.  She's a culture coach which means she teaches business people about the new culture they're going to work in.  I'd like to do that!
More views- 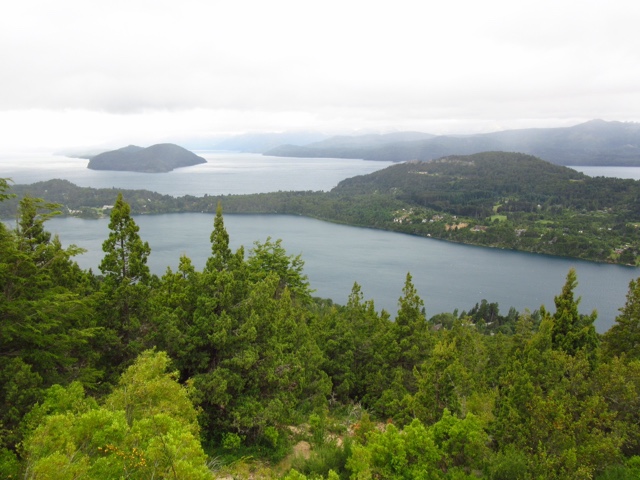 Roses are beautiful, everywhere and bloom a few times/year- 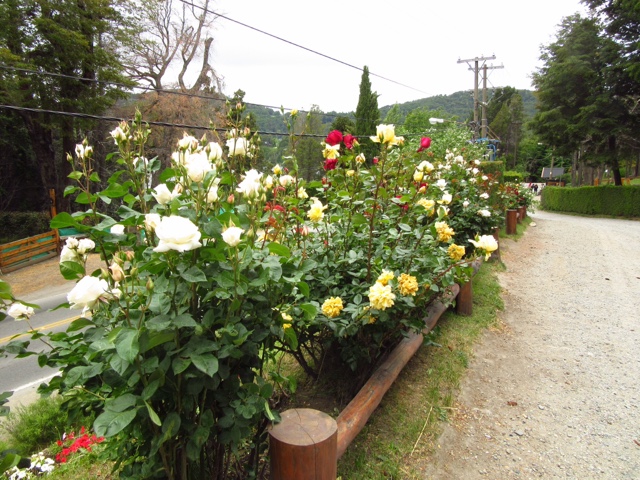 I made it to the campsite at 5:10 just in time for Christmas supper:  rare roast beef! sausage, chicken, lettuce salad, quinoa salad, champagne and wine!  My secret Santa got me a bottle of vino tinto - thank you!
Walking home I tried hitchhiking again and finally this time a woman picked me up.  She's a prof at the university and was only going a couple km down the road which was fine.  It got me out of the rain for a few minutes- 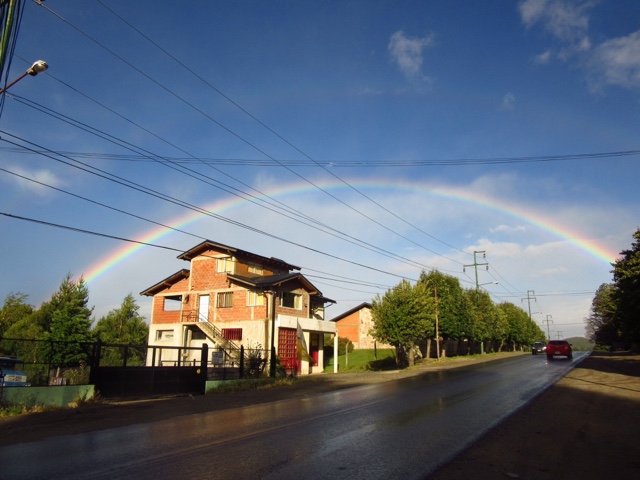 I ended up walking the last couple of km home.  It's funny because the address system they use is based on kilometres.  There are 2 main roads that run parallel and they're marked off by kilometers.  I am staying at 4095 Sarmiento Superior which means I'm at the 4 km point.  Unfortunately the kilometers aren't really kilometers.  I walked for 50 minutes and only went 1.5 km!
I returned to Los Miralejos for my last night.  I'll meet the truck down the road tomorrow at 10 as we make our way to El Bolson.
at December 25, 2017