What a strange day and how quickly scenes and cultures can change in 130 km.  We crossed from Western Sahara to Mauritania- 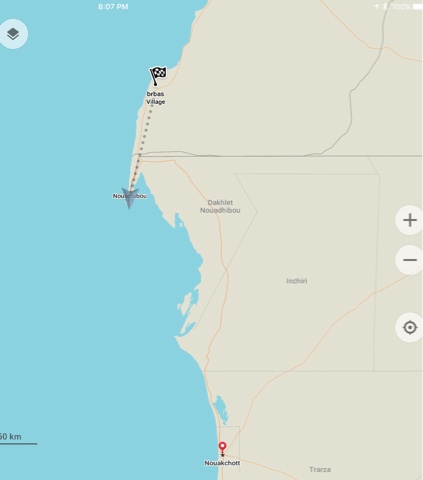 and it's a bit like we have entered another world.

We left Barbas at 7 under a full moon- 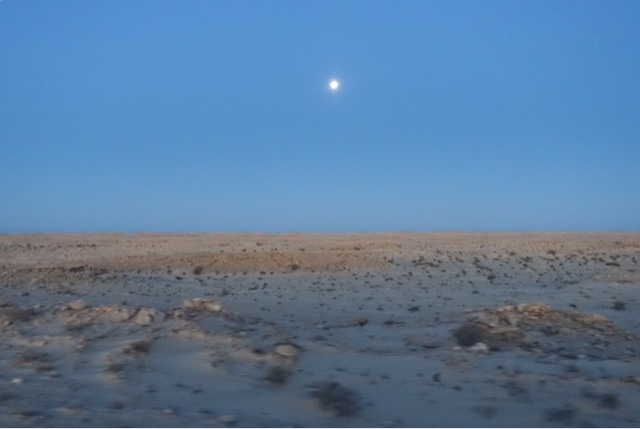 to get to the border early to beat the rush, and we did, arriving 30 minutes before it even opened.  Everyone has been very good about being on time or early.  It's nice not to have to wait on someone who is disrespectful of your time.  While waiting for the border to open, we went for coffee but I couldn't read the menu painted on the wall- 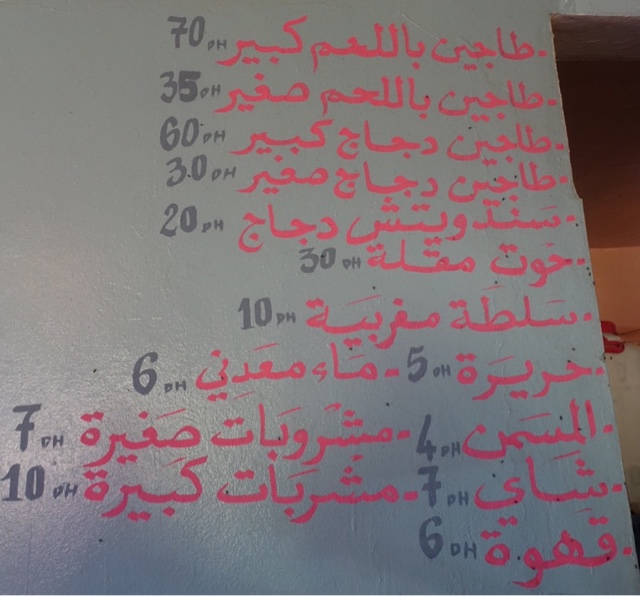 I still had an awesome café au lait for 80 cents.  After about 2.5 hours, we were through the Moroccan side.  It's funny because every border is so different and it's like all these men are on power trips.  They'll tell you to park here, then someone close to that spot will make you move and on and on.  Sometimes Nienke will take our passports into one office, then we will have to get off the truck to pick them up.  I think it's so they can look us in the eye and compare us to the picture.  Sometimes border crossings are a lot like gymnastics and today was no exception.  Go into this room, wait in this queue, jump this high, show your passport, get it stamped, blah, blah, blah.
Once the truck was cleared, we drove through 3 km of no man's land.  At first, leaving Maroc, there were many men hanging around, semis lined up and tons of demolished cars.  It's a lot like the movie Mad Max: Fury Road- 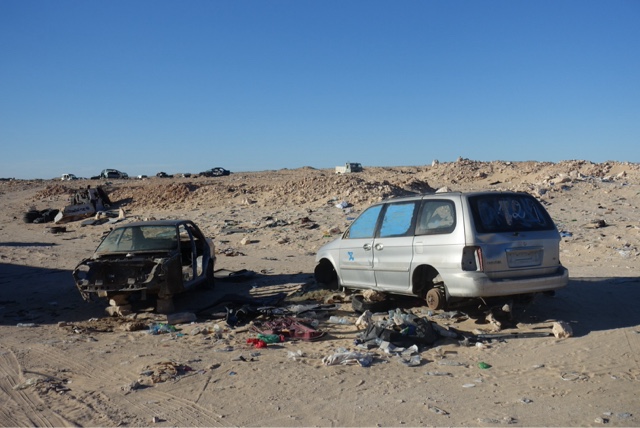 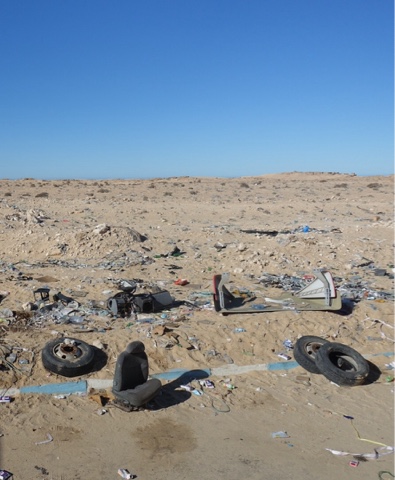 And tons of plastic- 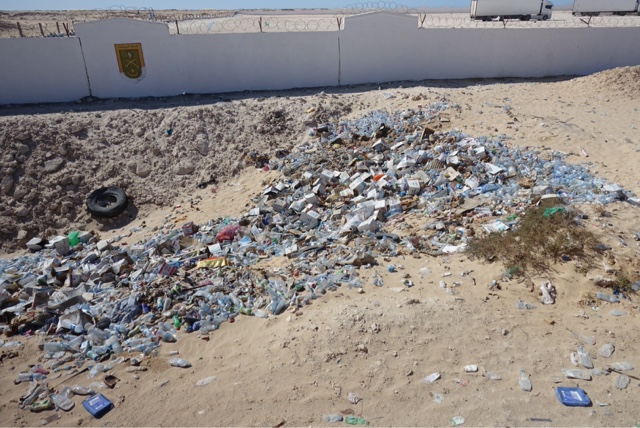 The 3 km is officially called Sahrawi Arab Democratic Republic  but is No Man's Land.  Believe it or not, people live there.  One man told me he was from Chad and has been stuck there for 2 years trying to join his family in Switzerland.  These men live in destroyed vehicles, old campers or semi boxes.  He did not ask for money, it seems he just wanted to share his story.  Some men were money changing at good rates while others were selling cigarettes and SIM cards.  Everyone was really friendly and they all wanted to visit.

Driving through these 3 km, we had two 'fixers' who are men who help make border life easier.  The left side of the road was lined with semis waiting to enter Morocco so an impatient driver decided to pass everyone to jump the queue. He was in our lane.  Our 'fixers' got him to back up so we could get by but we still had to drive off road for a while in the sandy shallow ditch.  Once away from the semis, there was a U.N.vehicle sitting up on a hill and some huts where they could set up guns or lookouts if required.  The road was non existent- sand, jutting rocks and really just a free for all.  The 'fixers' ran in front of the truck and showed us the path.

Once at the Mauritania border, we lined up again, women on one side, men on the other, to get our visas.  Last night we gathered our passport photos and yellow fever cards to be ready for today but I couldn't find my photos!  I have at least 20 that I think I must have left in North Battleford.  I'm not sure why I'd have done that, but maybe after securing my Ghana, Guinée and Nigerian visas from Ottawa, I figured I wouldn't need anymore.  Whatever the case, I wasn't really worried because a: I couldn't do anything about it and b: I had read that Mauritania does biometric fingerprinting, which is scanning your fingerprints on a small computer so I figured they would also just take our picture.  Luckily, that's what happened- 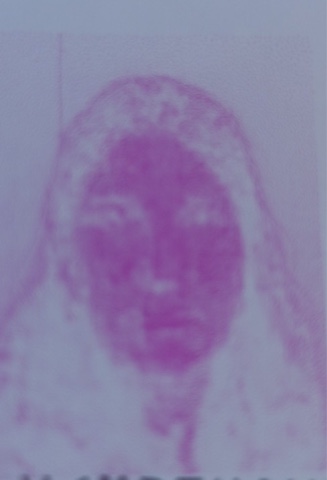 Getting the visa was really weird because we were taken two or three at a time, women first, into a little room where we had our fingerprints and photo taken, then our passport was passed back and forth between two men, one who stuck in the visa with the printed picture and another who photocopied the passport and collected the money - 55 euros or $70 U.S.  They prefer Euros and luckily I still had a few.

Once I had my visa, I walked along the road looking for a restaurant.  I had to show my passport, because technically I was leaving the border but I got back in no problem.  Lunch was great:  pollo asado, my favorite.  The baguette was excellent too- 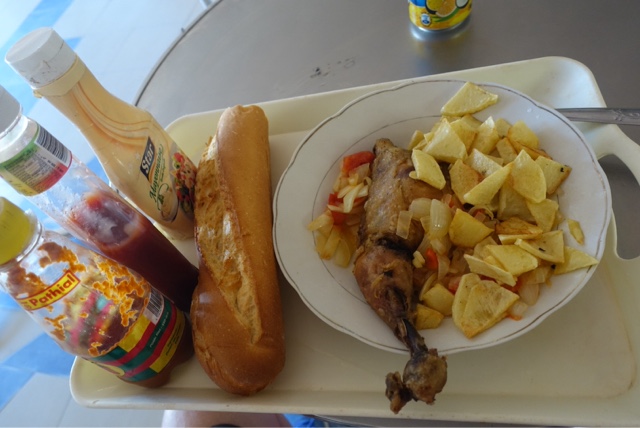 After lunch, I walked back to the truck and soon we were on our way, well for 100 meters when a policeman came on the truck and looked at all of our visas saying "okay", "okay", after every one and then asking for a 'gift".
My French has really come in handy.  Sometimes I have to interpret for Nienke and the "okay" policeman first asked for a "torch" - a flashlight.  I told him we didn't have one and then he asked for clothes - t-shirts or pants.  I told him that because we were on a long trip and only had small backpacks, we each only had one shirt and one pair of pants.  He was okay with that.  We've been warned that we will be continually hassled and asked for bribes.  If I have my way, we won't pay a single one! 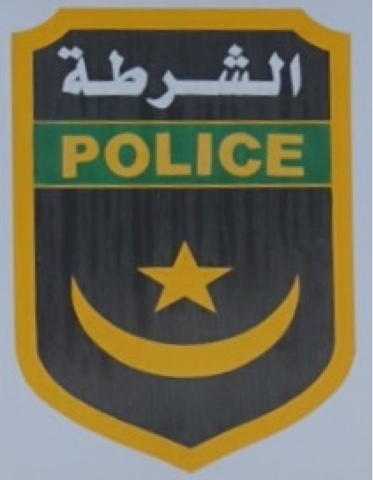 Once officially in Mauratania, we headed for Nouadhibou.  Along the way is the Iron Ore railway.  It carries iron ore from Zouerat to Nouadhibou and the train can be 2.5 km long with the lone passenger card ta hed on the end- 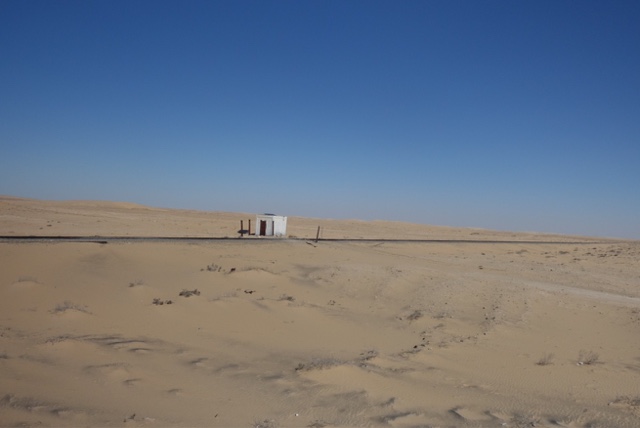 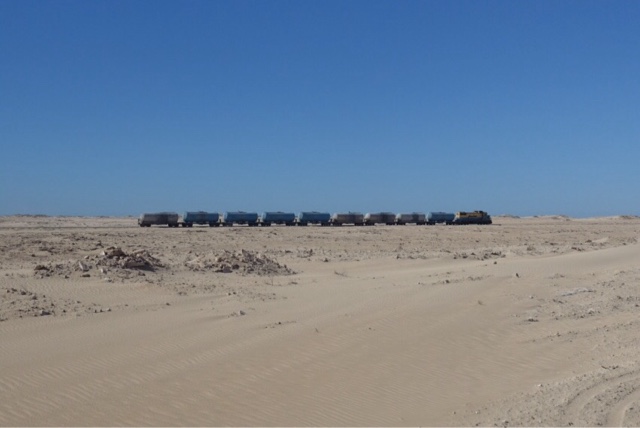 We passed a camel and goat feedlot- 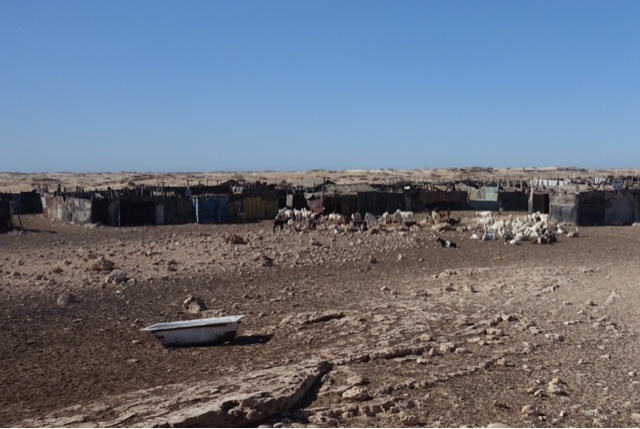 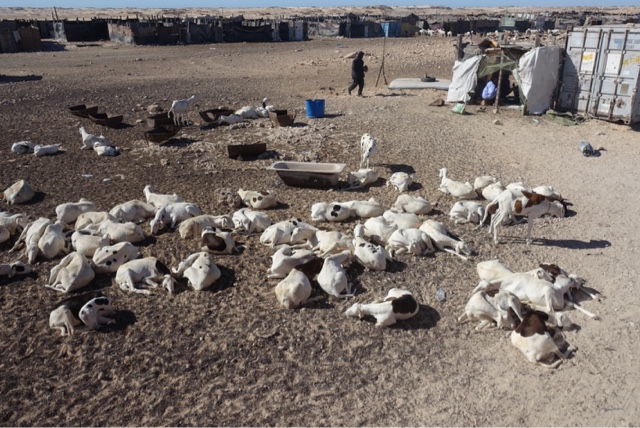 and a goat herder hanging out with his flock- 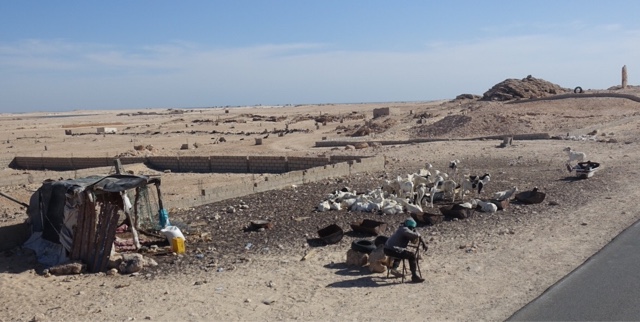 There are interesting rock formations in the sand- 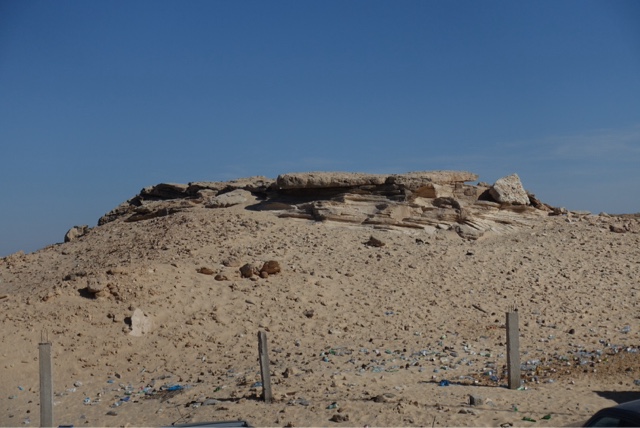 which has blown into compounds, practically covering the fences- 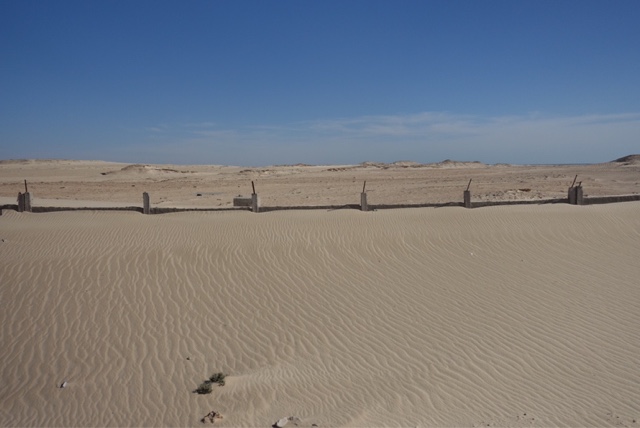 Nouadhibou is a city of many new but empty buildings made of cement blocks.  Hole in the wall restaurants are everywhere and the cars, many are taxis, have seen better days- 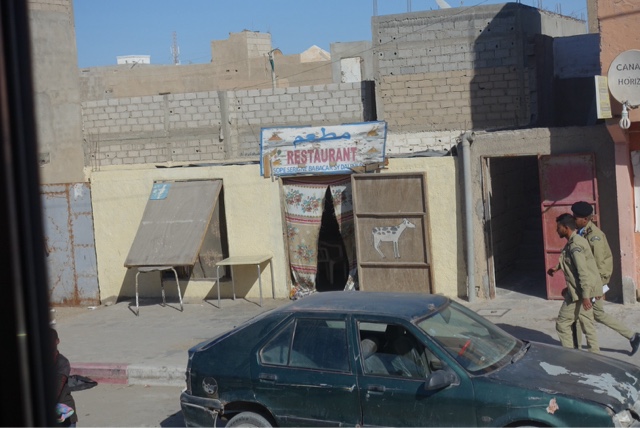 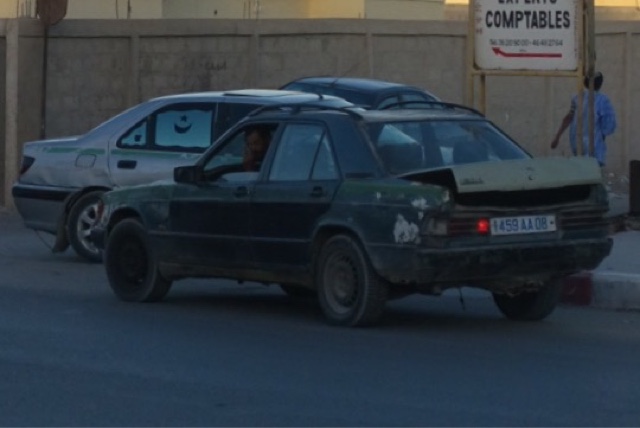 There were goats on the ledge of a building- 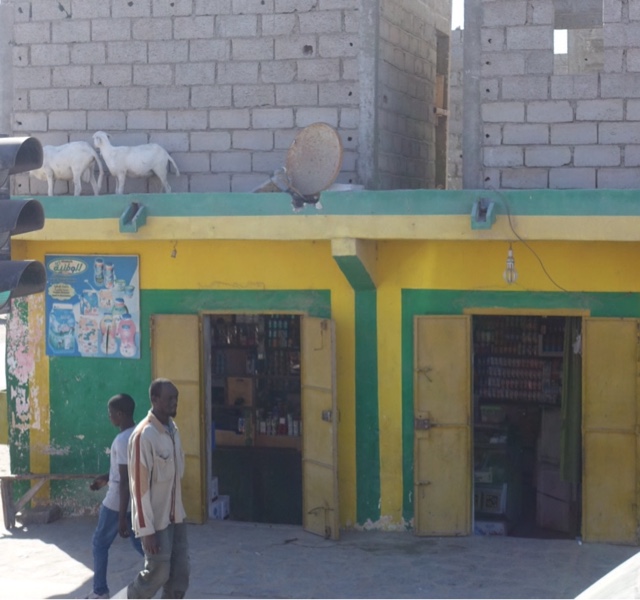 This man is selling SIM cards from this little shack- 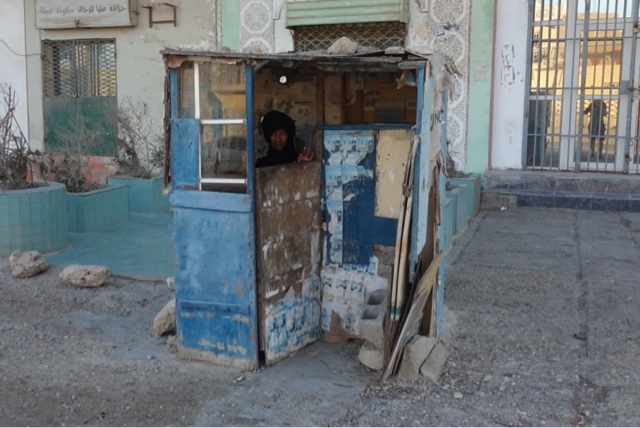 Once at the campsite, i was able to upgrade for $1.84 (why wouldn't I for that price?) and I found a place that took passport photos so I now have 8.

Once the tents were set up- 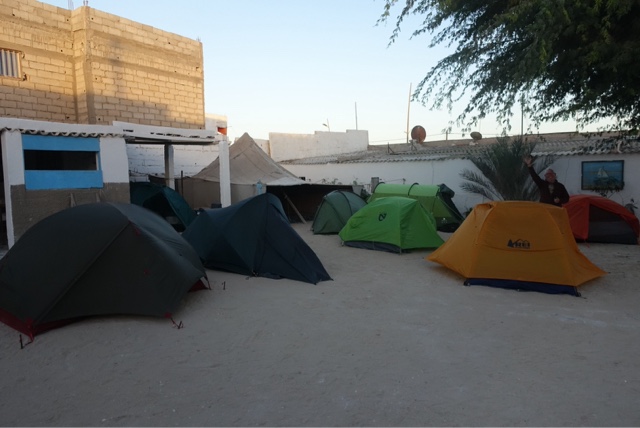 Supper was mutton but I couldn't eat it!  It tasted like the dead animal smell I get when I walk by the meat hanging from hooks along the sidewalk.  The sauce was excellent but.....

The last few days driving through Western Sahara have been quiet.  We haven't seen many people and we've met mainly semis on the road.  We've driven for miles without seeing any buildings or animals however, here in Mauritania, it seems much more populated.  There are more animals and in the city, the streets are busy with cars going everywhere.  It just seems more alive than the last few days have been.