It was a slow day.  There really isn't much to see in Nouakchott so there wasn't a rush to get into the city and explore.  I did some wash that was dry in about 15 minutes in the wind and sun, then it was truck clean time.  Once a month we have to take everything off the truck and wash it from top to bottom and inside.  The whole idea of truck clean seemed ridiculous to me because it's a windy dry place and we still have a few more days here and on the highway.  Oh well, I think it was mainly to make Terry get all his stuff off the truck.  He's a hoarder and has bags and bags and bags of stuff everywhere.  He's quite the character though and I am lucky to be in the same cook group with him. 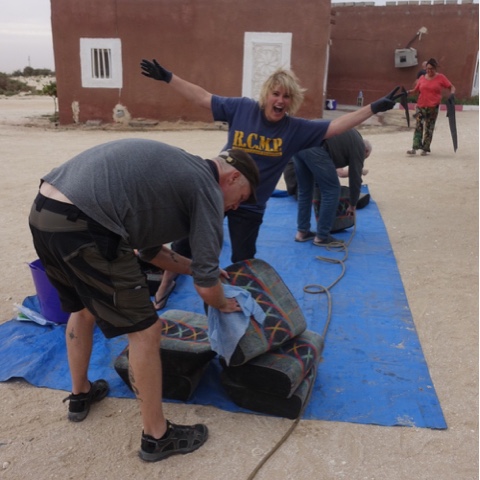 Claraissa, Rhona, April, Norm, Brian and I washed a lot of the stuff and flapped it dry.  The cutlery gets particularly manky- 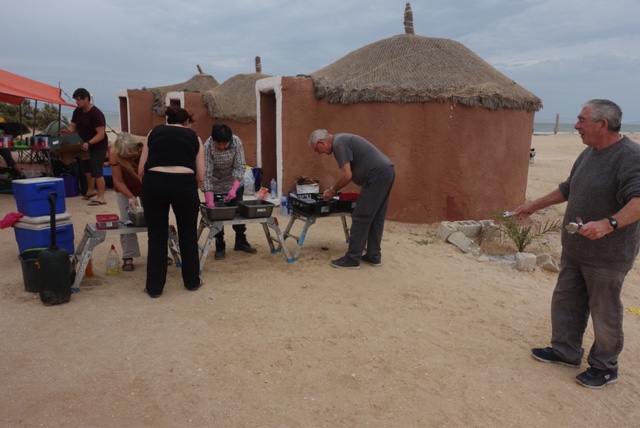 All the crates are emptied and scrubbed- 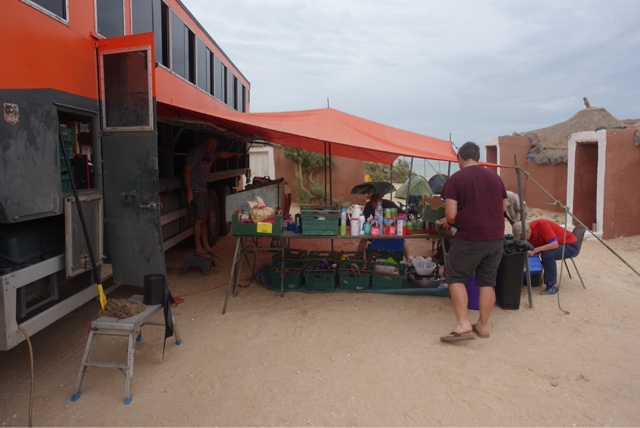 Truck clean took about an hour and a half and then it was time for grocery shopping.  We waited while taxis were "supposedly" on their way.  Eventually a beat up wreck arrived- 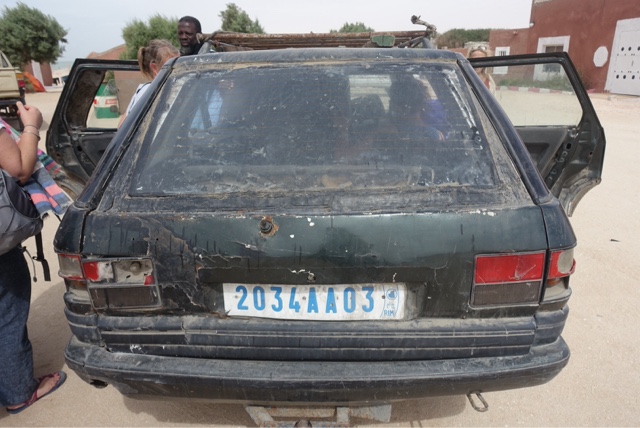 and 8 of us piled in!  That's normal I guess and believe it or not, the trunk opened!  After shopping, we met a young Palestinian man who lives in Istanbul but is here to help his lazy brother run a hotel.  He took us in his van to an ATM and then to his hotel where we were going to have lunch but he had just 'stolen' the cook from the French embassy and the menu wasn't current.  We just had a drink then called another cab to take us back to the campsite.

Later in the afternoon, we walked along the beach to the fish market.  It's the number one site in Nouakchott and only a 10 minute walk from our camp site.  What a place!  There are hundreds of fishermen and brightly painted boats- 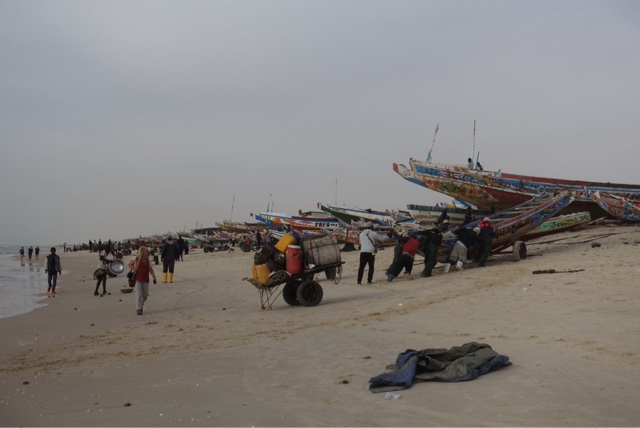 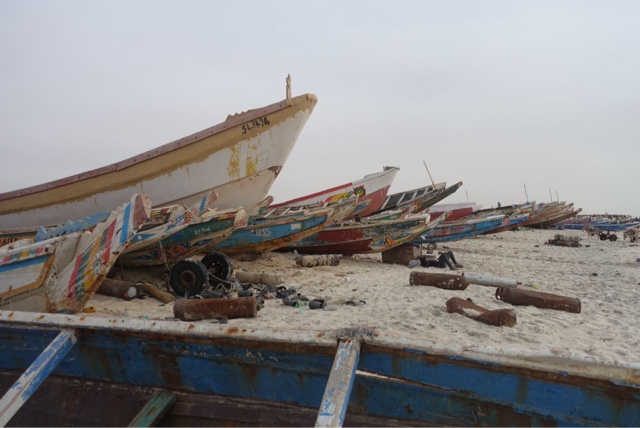 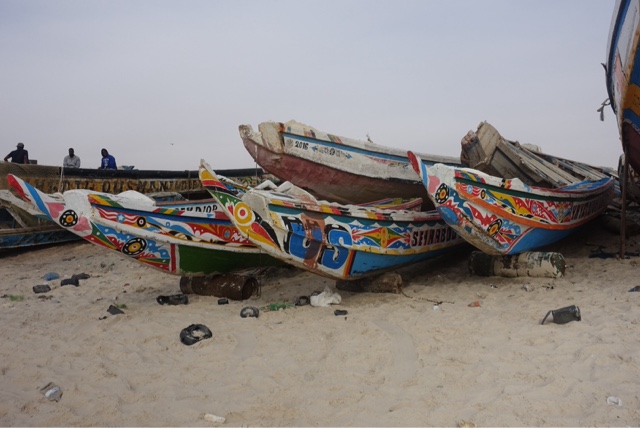 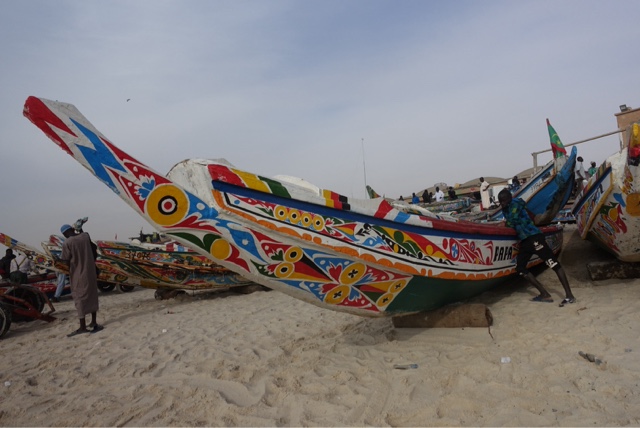 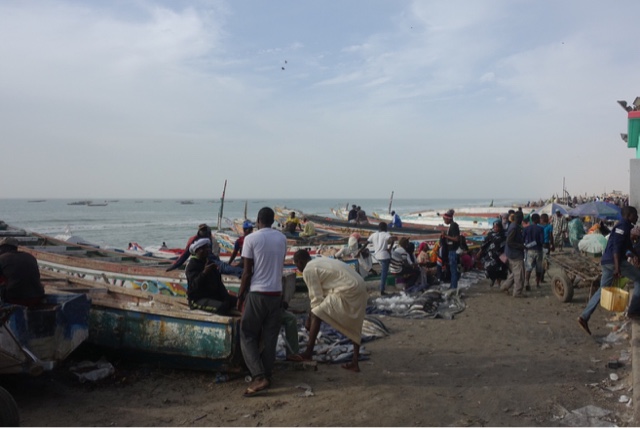 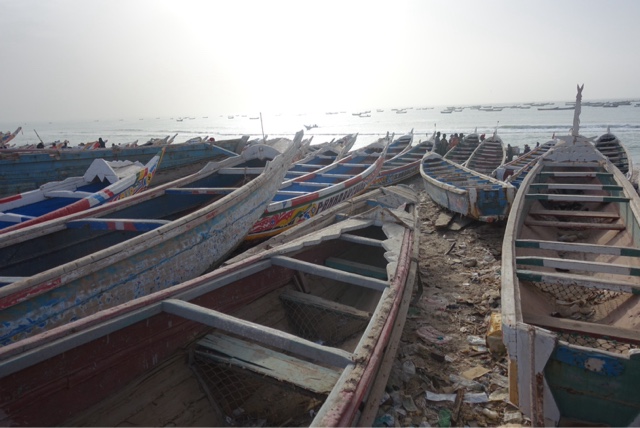 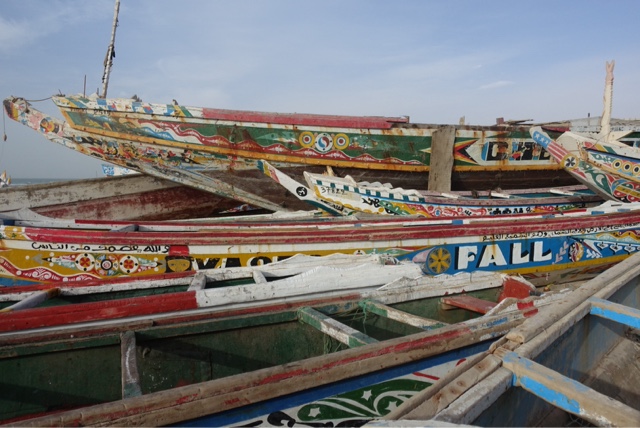 Donkeys are used to transport the motor, fish, anchor and gas cans when the boats come to shore- 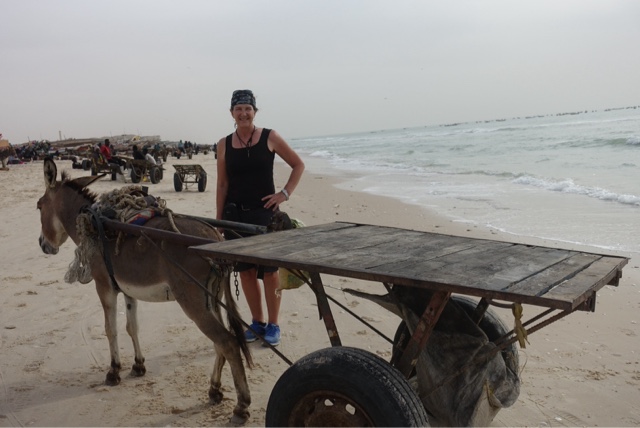 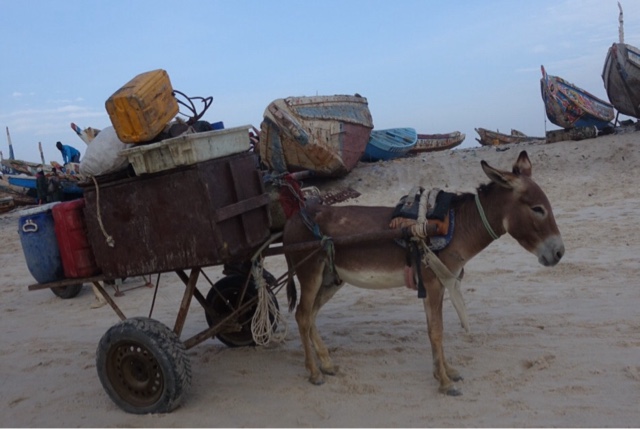 The fish market itself is a busy place- 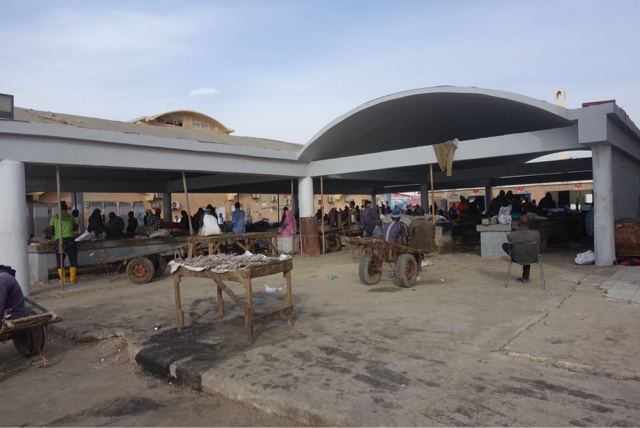 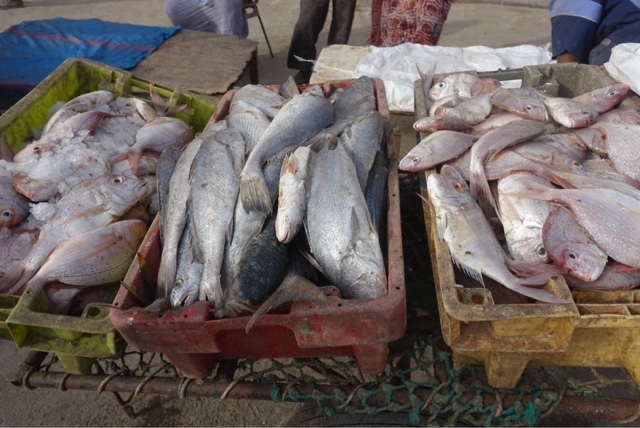 Fish heads and other rubbish is everywhere- 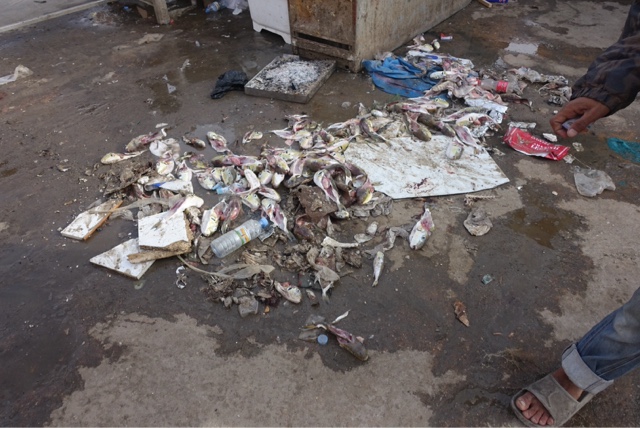 This man was hacking off very thick filets from large fish- 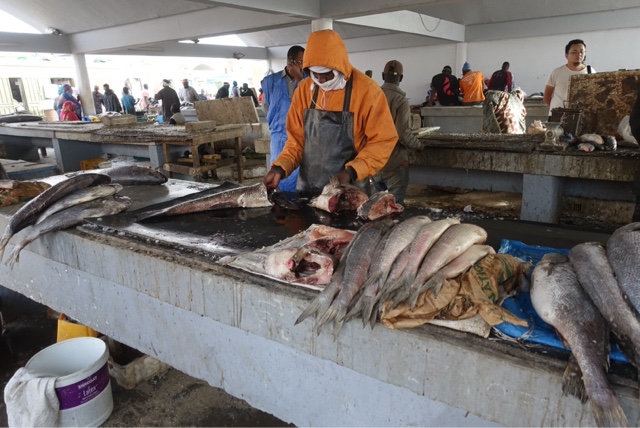 There are lots of boats in the water, always coming and going- 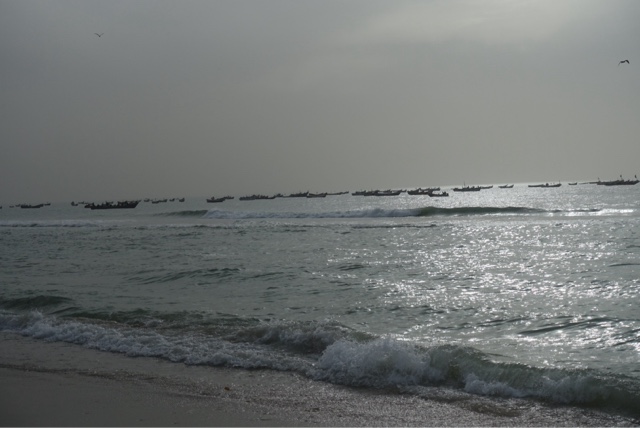 They ram up onto the shore- 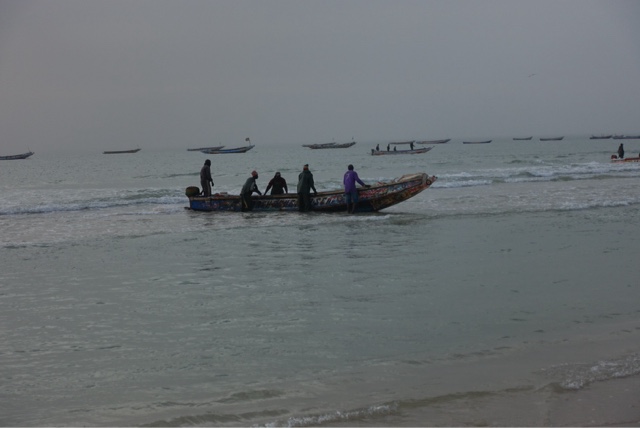 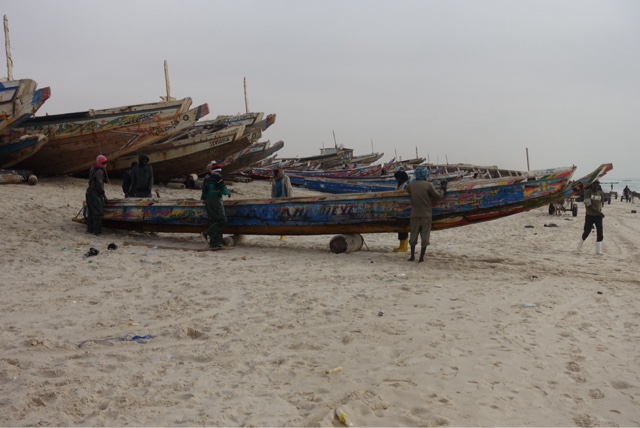 Walking back to camp it was prayer time.  They just kneel down and hop up where ever they happen to be five times a day- 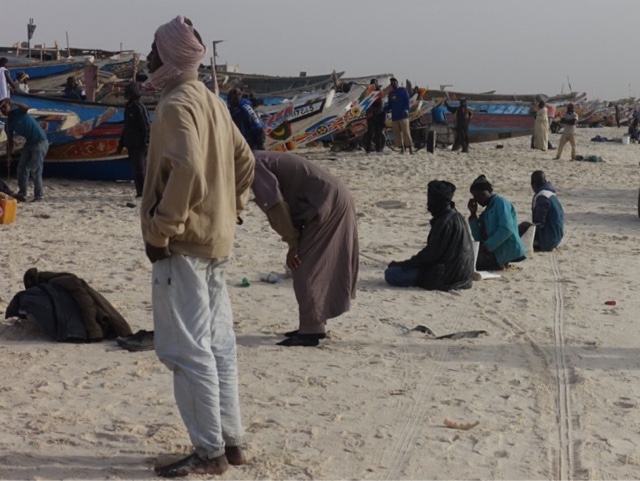 For supper we made spag-bol which is spaghetti and meat sauce and pico de gallo.  We even bought dessert!  We're in charge of breakfast tomorrow too but it's not until 8:30.  I might head into the city but time will tell.  Looking forward to another day in the warm weather!