Mauritania has one of the world's lowest population densities and is equally divided witih Moors of Arab-Berber descent and Black Africans.  The average lifespan of men is only 61!  The cars are old dust covered wrecks: Mercedes and every other kind and most should be junked.  However if they can get them to run, they will be on the road.

Men wear western clothes covered with white or blue muslin that have pockets in the front for their cell phones and money.  Their head scarves are made from 3 meters of muslin and worn to protect them from the sun and blowing sand- 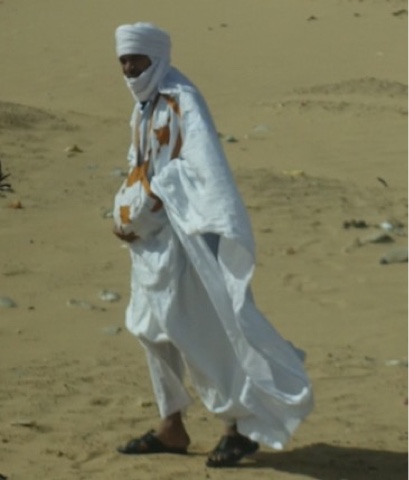 There's at least one pharmacy/block but no one sells mosquito spray.  Apparently there aren't any here but I have started my malaria pills.

Our camping compound has rooms around the outside walls and the inside is sand.  This morning there were 2 cars parked inside too.  Call to prayer was about 6 am - no alarm clock required here!

Leaving Naoudhibou, there were numerous stalls waiting for their owners to open shop- 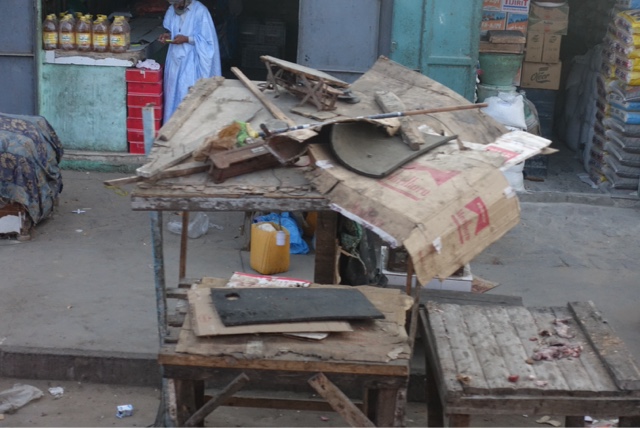 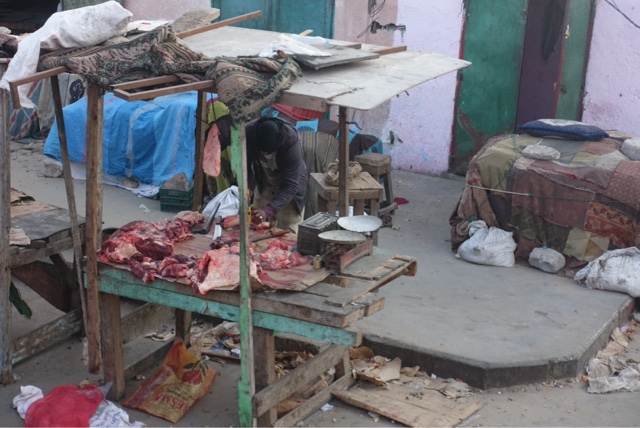 Shops line this street and carts will fill it soon, in spite of the mess left from yesterday- 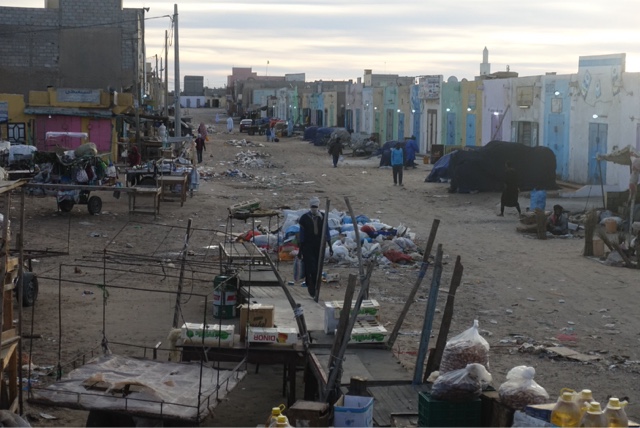 Vans take people to neighbouring towns because most don't own cars- 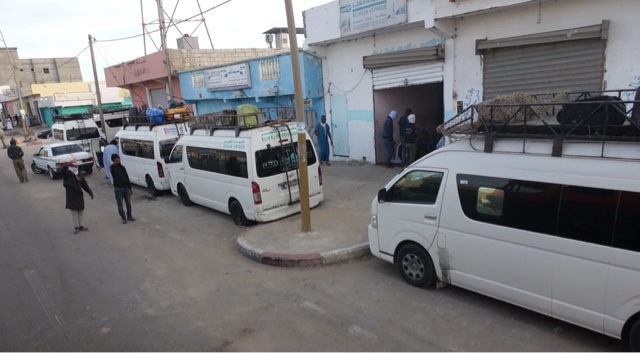 Some cars are covered with protective clothes- 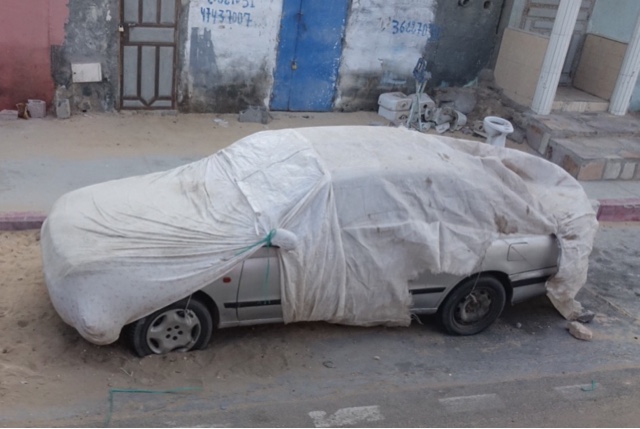 Others are wrecks that run. Lauretta met a man who flies three times/month to Spain to buy cars and drive them back- 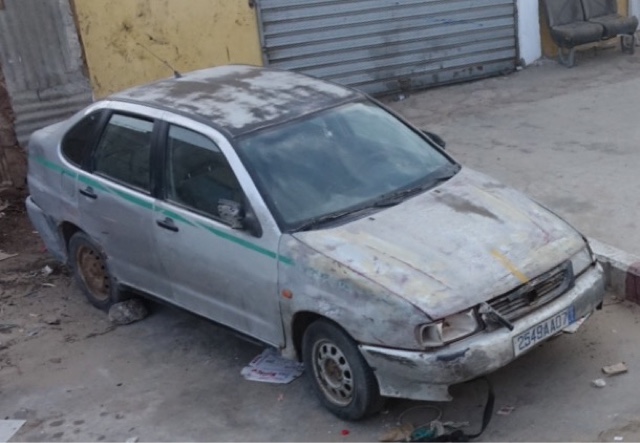 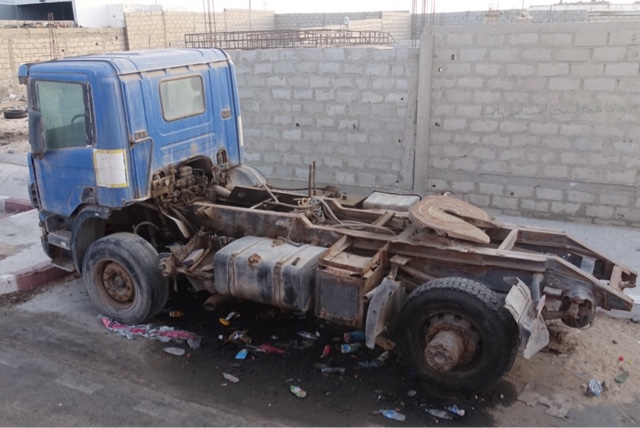 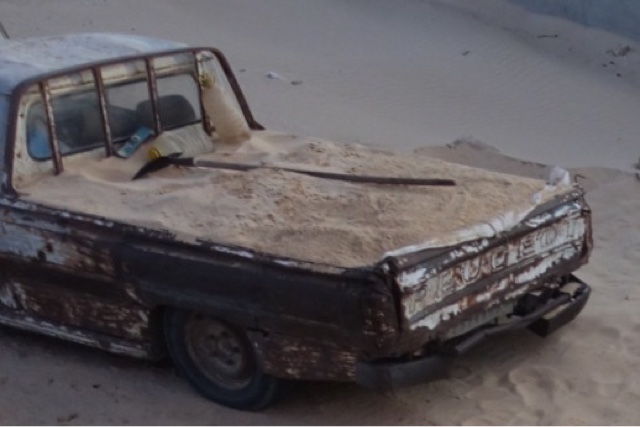 A camel herder taking his herd out for the day.  In the night they bring them home and lock them in a safe compound- 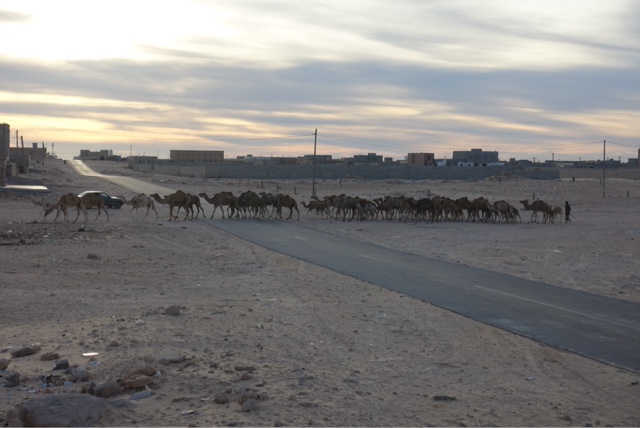 We drove past the goat herds again- 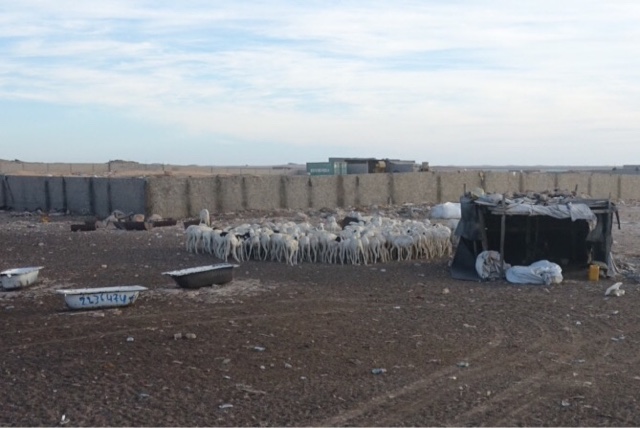 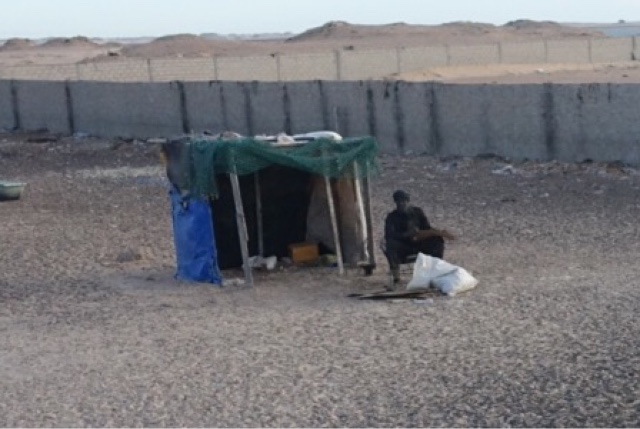 We drove past sand covered compounds and the way the wind blew today, it's amazing the walls aren't completely covered- 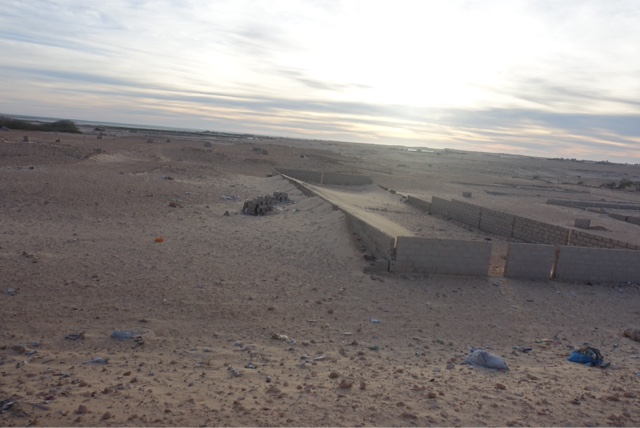 I think this house is vacant- 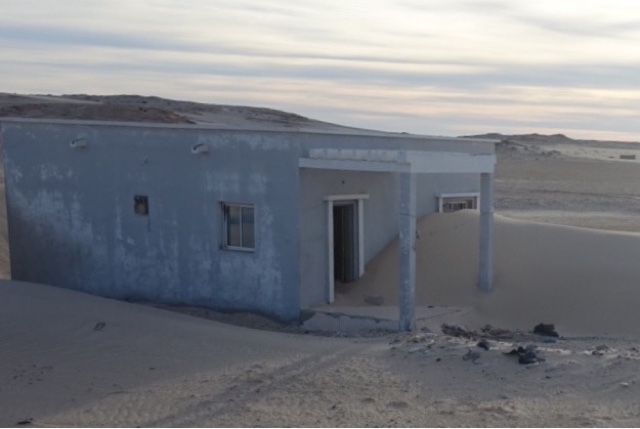 We also passed the camel feedlot- 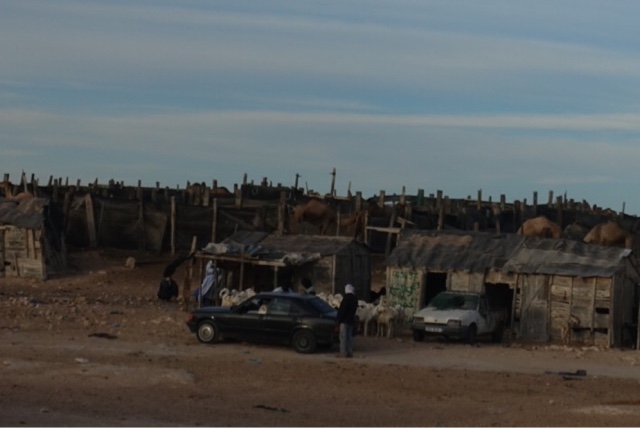 The desert is never ending- 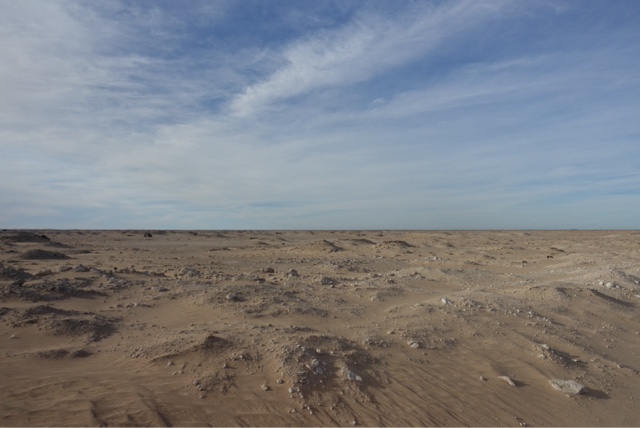 And there are many burned out, gutted wrecks along the way- 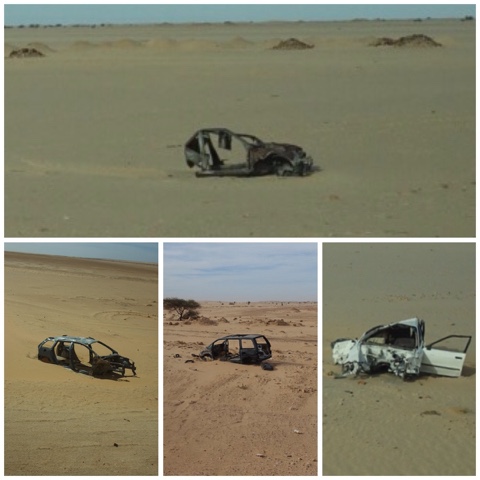 The wind was howling-

So I put on my sand gear- 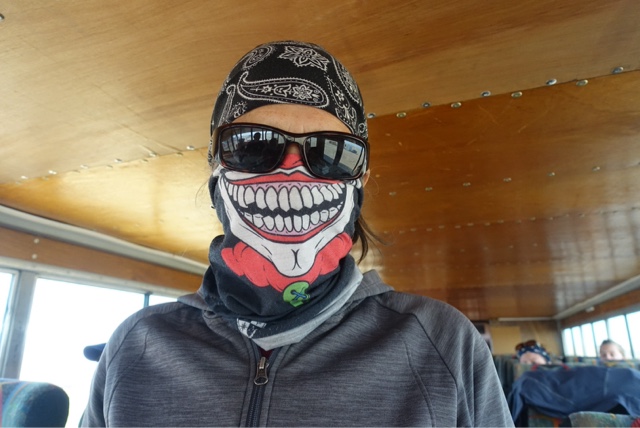 We stopped at this restaurant for a toilet stop.  It's miles from anywhere but had a fairly well stocked grocery store- 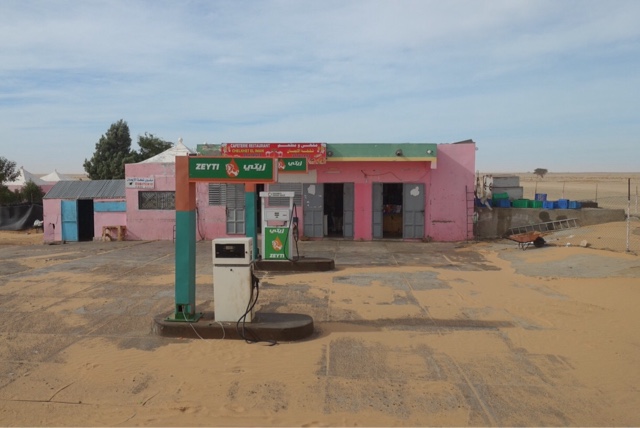 We stopped at a bigger town for lunch but after seeing what was available, we carried on- 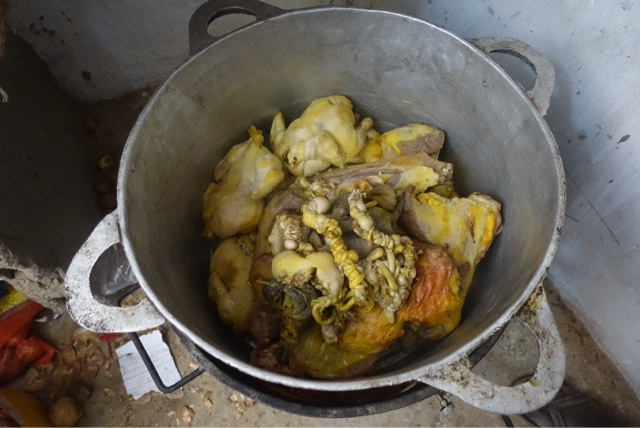 That's chicken on the outside edges and some kind of stomach and intestines in the center!  A street in the same town- 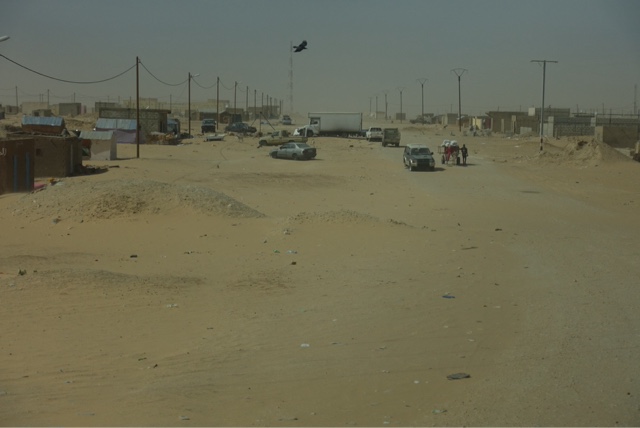 Further along we met a grader clearing the sand away- 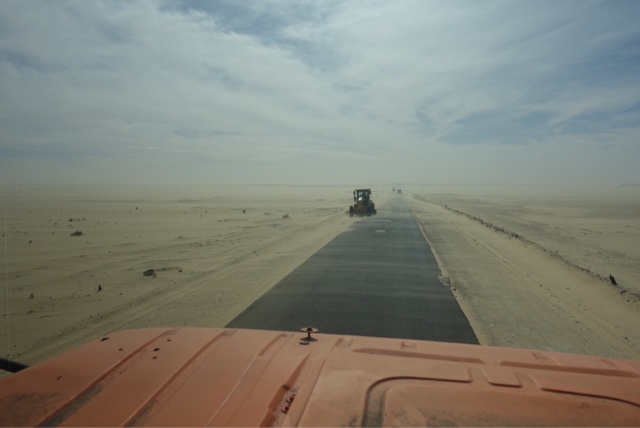 Another toilet stop found us close to some bigger dunes- 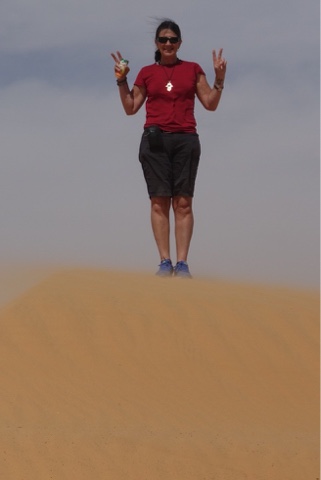 We came across a village- 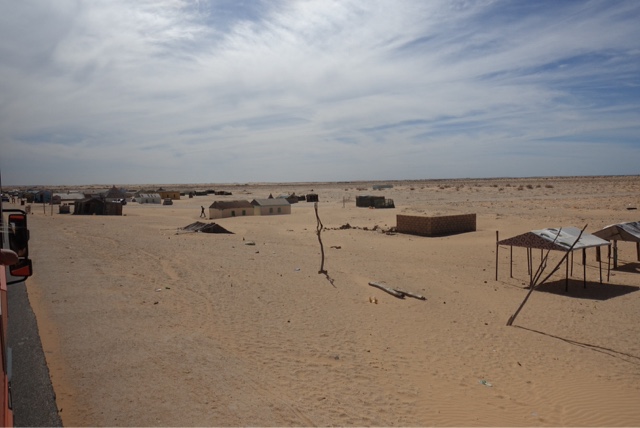 Where most homes had fish drying on a line outside- 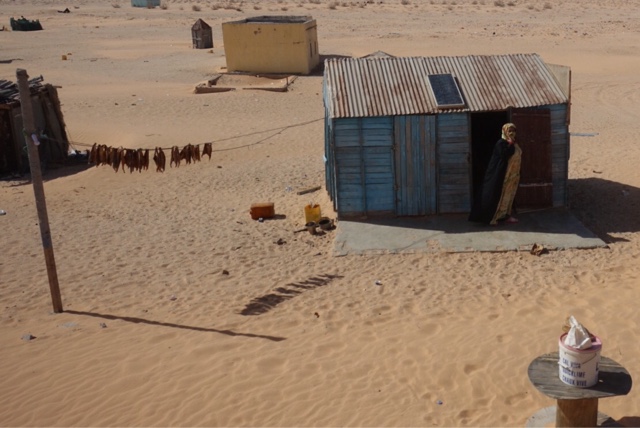 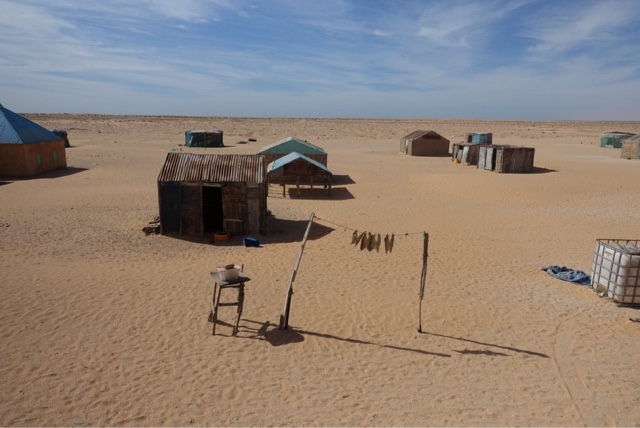 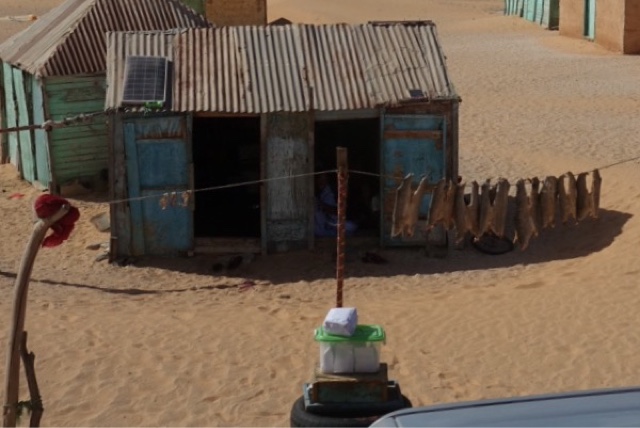 We're at a campsite right on the beach and I've moved into a small hut for the three nights.  Looking forward to exploring Nouakchott although I'm thinking there's not that much to see!