My first stop today was at Starbucks to pick up some good ground coffee.  I'm not too crazy about the stuff I bought in Portugal so thought I'd stock up for a while.  I took the bus which was very fast and convenient.  Modern Marrakech is more beautiful than Saskatoon.  Buildings are very new and there is no litter on the streets.  It still amazes me that in 15 minutes, I can be shopping in the messy medina or in a modern shopping mall just like we have at home- 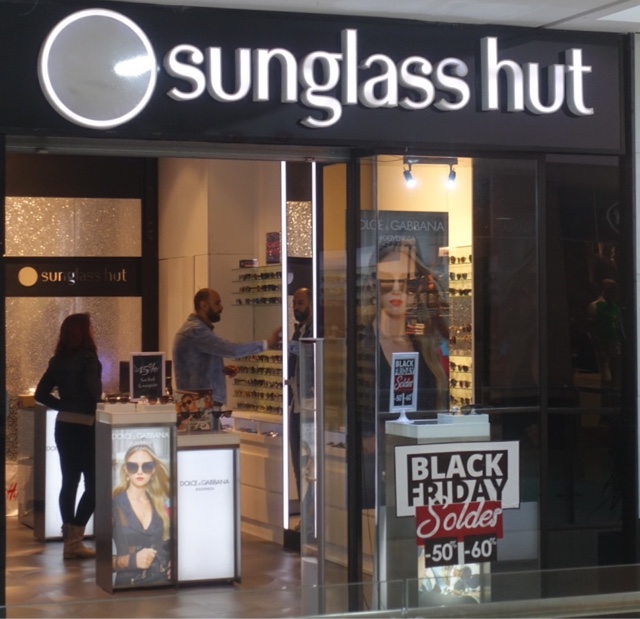 Nearby the mall and Starbucks is the Jardin Majorelle so I thought I'd pop in there before I was to meet Michelle for lunch.  Well, the line up was about half a block long so knew I'd never make my lunch date.  I walked back through the medina - I am sick of medinas and luckily was only accosted a few times.  A nice older man asked if I'd seen the spice market yet so away we went.  He asked how my visit was going and I told him fine except for all the hassle.  He said "they" were trying to clean that up and I thought, ya sure, you'll expect a tip at the end of our visit.  He said he makes good money as a teacher and was going to the spice shop anyway and only wanted to show me so I enjoyed that, especially smelling a 35 spice concoction!  I continued on amongst the cars, bikes, motorcycles, pedestrians and- 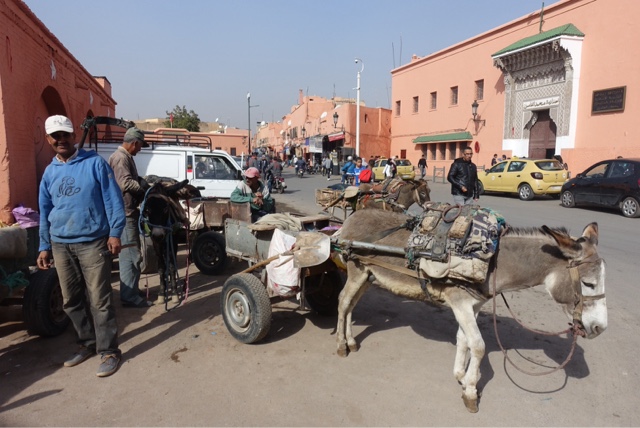 What a city of contrasts!
I met Michelle and Brian for lunch and had a kefta meatball tagine complete with a fried egg on top.  It was delicious- 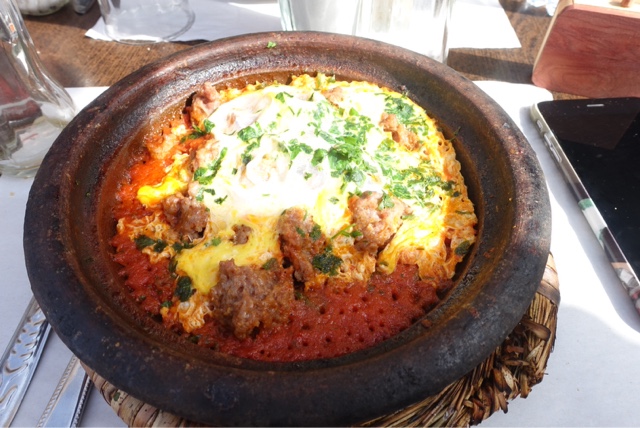 After, Brian and I walked to see the Koutoubia Mosque which has one of only three in the world Almohad minarets which is also 70 meters tall- 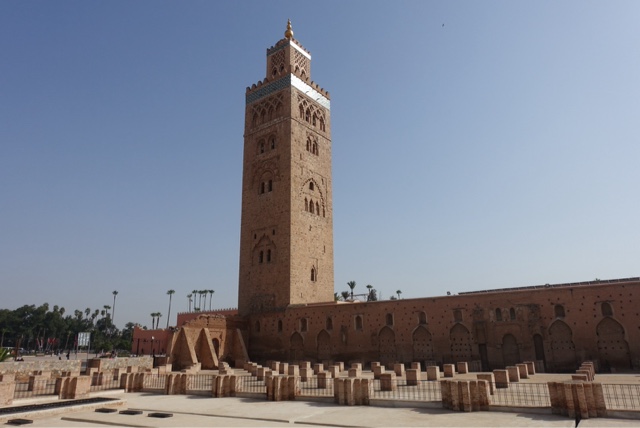 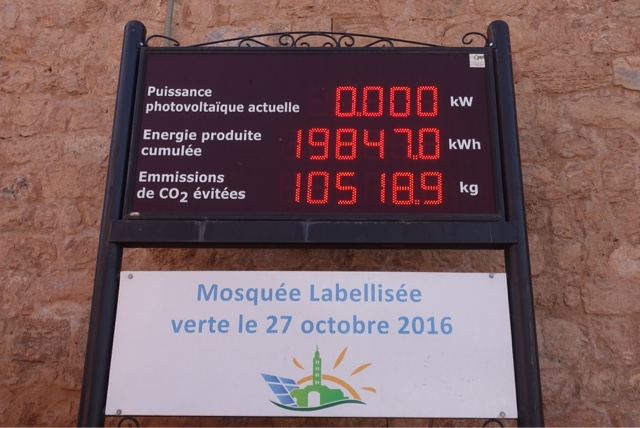 As non Muslims, we could not enter the mosque.  Of course outside there are numerous shops, including this fellow selling miniature prayer mats- 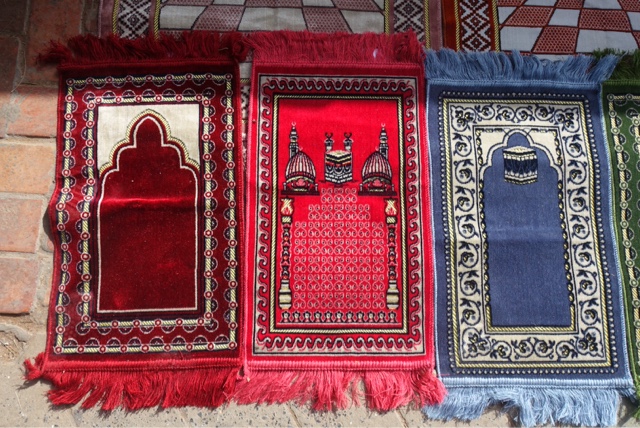 -
Walking around in the square, we spied Nicola and Grant up on a rooftop terrace so joined them for spectacular views- 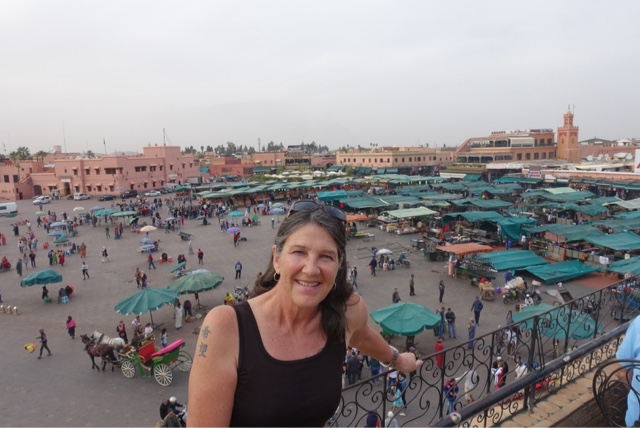 There were a couple of snake charmers nearby.  The man in the striped coat is playing the music while the snake dances and the man in the blue tries to coerce people to let him put the snake around their neck, then pay big money- 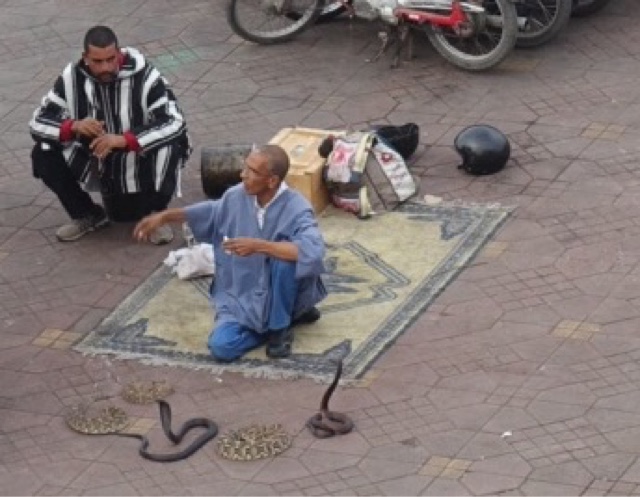 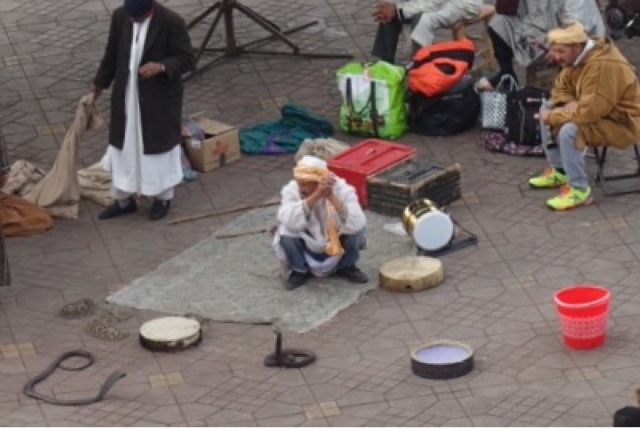 As the afternoon wore on, more and more booths were put up.  They will all be gone in the morning, only to set up again for tomorrow evening- 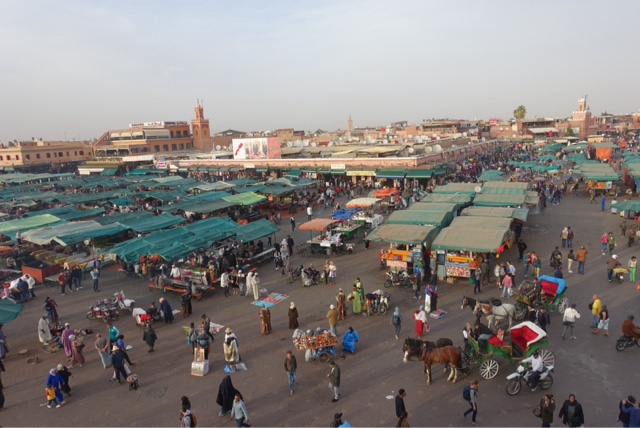 The far west end of the Djemaa Él Fna Square- 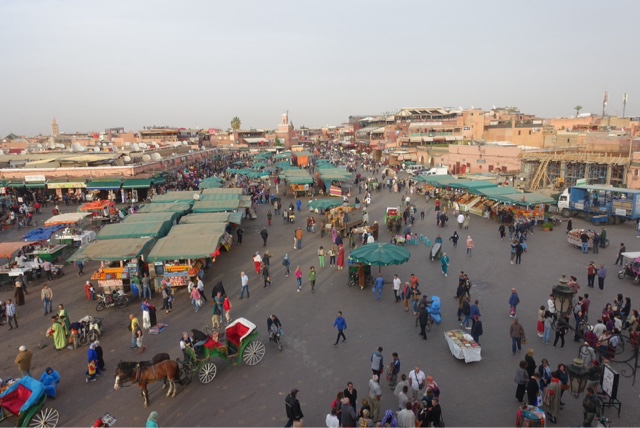 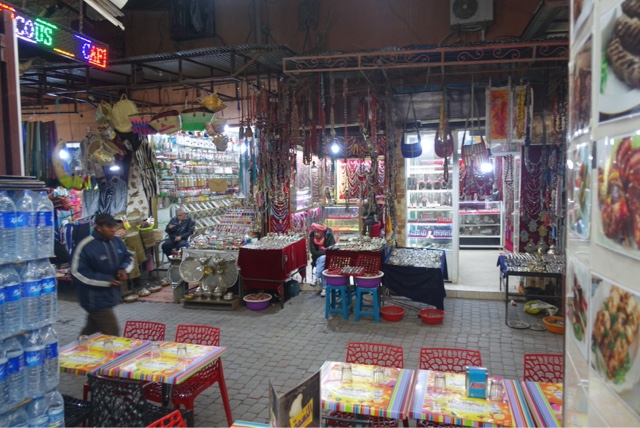 Shops! Shops! Shops!
I had a good day and tomorrow hope to get to the gardens before the crowds although it's supposed to rain.  Maybe I'll spend the day in my room reading!
P.S. 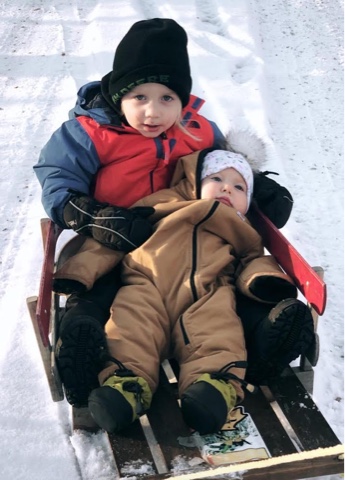