Happy Birthday to my Mom!  I hope she is having a great day!
We didn't have much to do today besides try to get some visas.  Michelle and I hopped in a cab with Nienke and Jono, in search of embassies.  Only Michelle and I have our Guinée visa.  Everyone needs that one, as well as Guinée Bissau and Liberia.  Most also need Nigeria but that one is turning out to be very difficult.  Many have filled out the forms, visited embassies and even paid the 200+ U.S., only to be refused.  As if.  Nigeria is probably like the rest of these countries.  A sh_t h_l _ - Donald Trump's unfortunately accurate description.  Take away the people and you have very little left.  Anyway......
We had a cab driver who bent over backwards for us but later I learned he charged $15 / person!  He took us to the former Guinée embassy and then found the right one.  He then asked the tourist police where the Liberian one might be and off to Banjul we went - 25 minutes away.  There he asked the Ministry of Foreign Affairs and we were told it no longer existed.  Yes, these are the kinds of struggles we deal with here on a daily basis.  Michelle and I got dropped off close to Guinée Bissau and Nienke and Jono carried on.
While at Guinée Bissau, we joined the queue.  The woman handwriting the information into a big book and writing out the visas had made many mistakes with the Canadians's visas right before us so we made sure everything was correct.  4050 dalasi later, or $109, Michelle and I were set.  We've read that it's much cheaper in a town we'll be going through once back in Senegal so everyone else is waiting until then.  Whatever.  If it is, it is, and if not.... Either way, I have mine now.
After that, we hopped in a cab to go back to Senegambia, the tourist part of the area.  Michelle had  found an awesome restaurant called Gaya which has air conditionning, beautifull paintings on the walls and a North American menú.  It felt like I was in Saskatoon!  I had a couple beer, an awesome cheeseburger and fries- 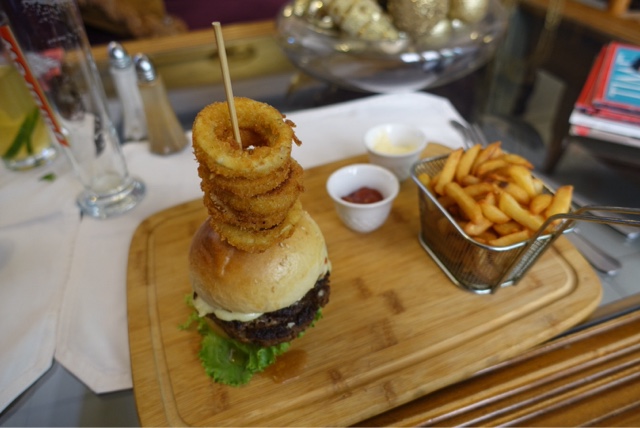 We spent the afternoon on wifi and then left to go back to the local restaurant where we had eaten yesterday so I could pick up food for tonight's supper.  Back at camp, I was on cook group with Terry and Norm.  Supper was great but we had lots of leftovers.  When we have the opportunity, lots of people stay away and eat out - I can't blame them because I do it too.  After cleanup, I came to my own PRIVATE room and just enjoyed reading and being by myself.  Breakfast is at 9 tomorrow so I'm hoping for a great sleep and lazy morning!
at December 11, 2018