Somewhere near Piche to near Kounsitel, Guinée, December 23, 2018

The crowd dispersed once it got really dark.  I was thinking they might stay late into the night because there was a full moon so it was easy to see, however most people had drifted off to their tents by 8 pm so there wasn't much to watch.  The night was good - very quiet except for the odd donkey braying and a far away dog barking.  Of course, the roosters went nuts as it started getting light but by then I was ready to get up.  At breakfast, Nienke informed us that some idiot had taken a poo in the shower tent and left it there in a plastic bag.  We have a poo tent and a shower tent.  Last night, only the shower tent was set up - it's like a modern day outhouse.  We take a manual water pump in and spray ourselves down.  It's really refreshing.  For our poo tent, we have a toilet seat mounted on a fold up chair but for some really weird reason, it has a large plastic garbage bag attached to it.  I don't know if a person is supposed to crap in the bag or what.  I've never used it.  However, in the night, someone crapped in it but left it in the bag in the shower tent.  You can imagine the surprise and odor this morning.  The culprit was asked to dispose of the bag somewhere, and asked what he/she expected to do with it. It definitely wasn't welcome on the truck and bury a large plastic bag?  I don't know if anyone manned up or not and we all have our suspicions who it was!
We left the soccer field/campsite at 7 and soon came across an accident.  A man on a small motorcycle was carrying four gigantic bags of peanuts and he was laying in the ditch. Luckily he wasn't hurt and had on proper shoes and a helmet.  We helped him onto the road and Jono used a rope to properly attach his bags to his bike- 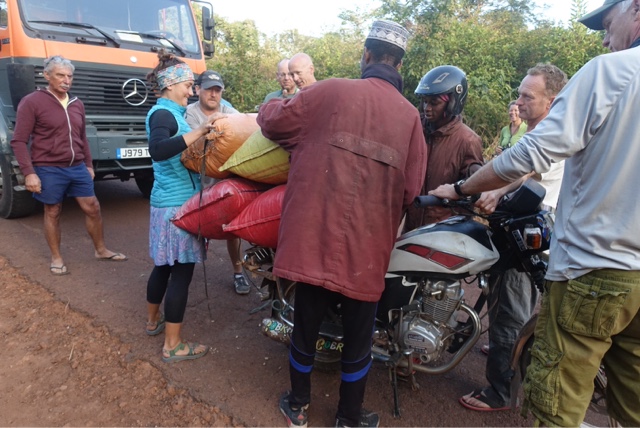 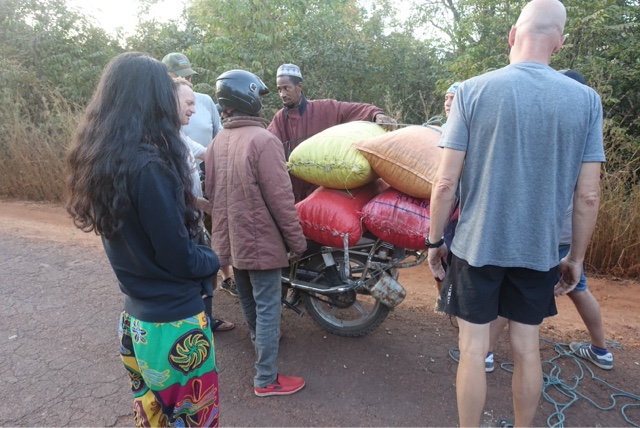 Soon he was off- 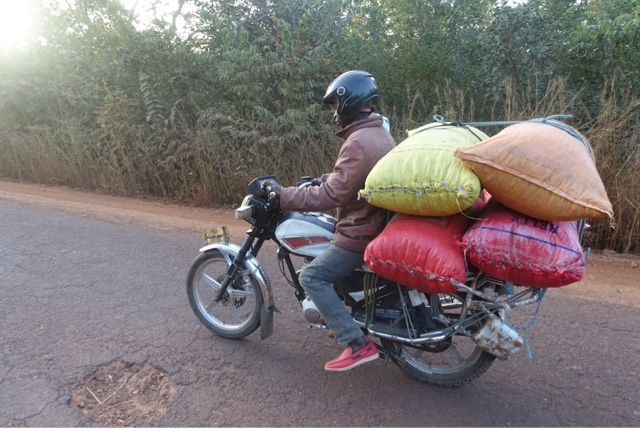 Once at the Guinée Bissau border, we were all crowded into a hut- 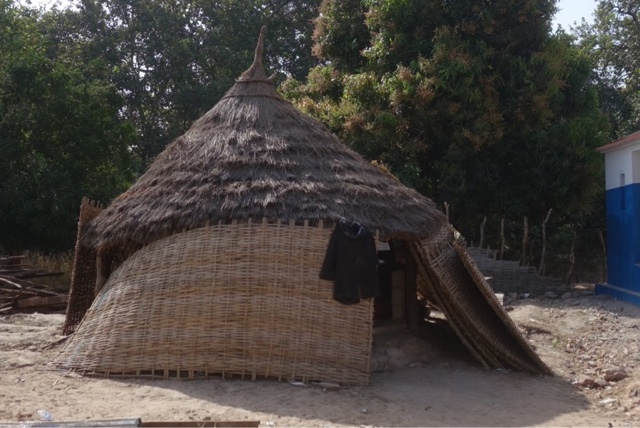 All twenty nine of us while a woman read out our names and information and a man wrote the information into a book.  It took forever-- 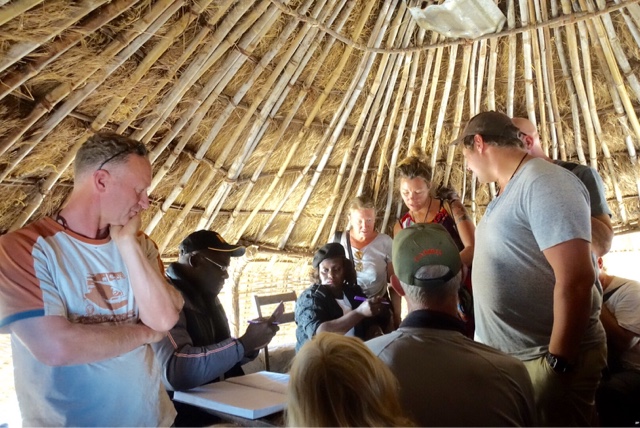 Pictures aren't allowed at border crossings but Jono had permission so I thought I'd be okay too.  However, I turned on my flash and got yelled at! 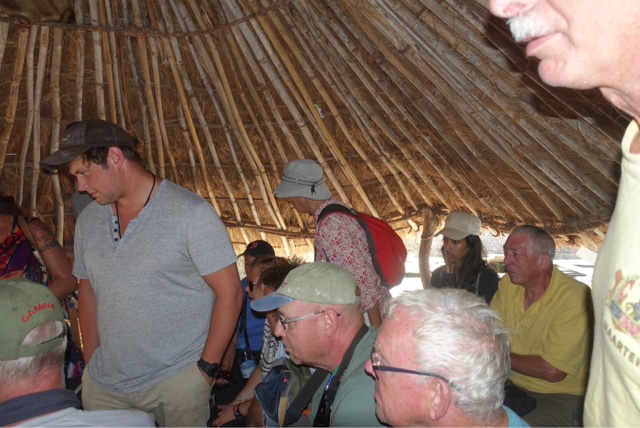 After a kilometer or so in 'no man's land', we arrived in Guinée.  Holy shit is all I can say.  The road has a huge erosion crevice along one side- 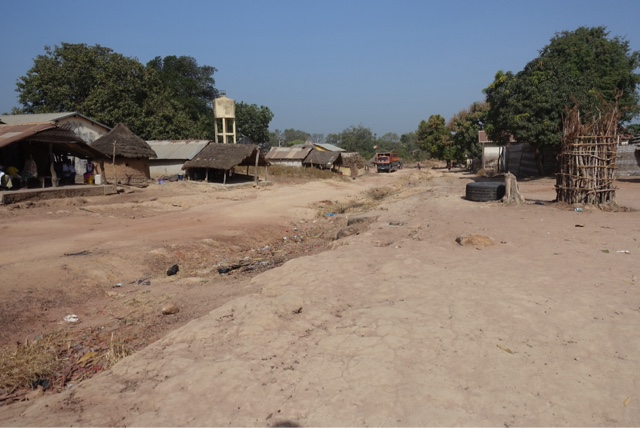 I visited a local toilet- 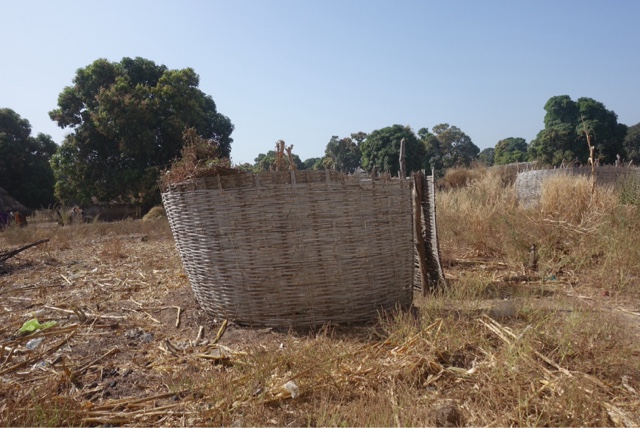 The women were very friendly and gave me a container of fresh water for washing and flushing.  The smell wasn't that bad- 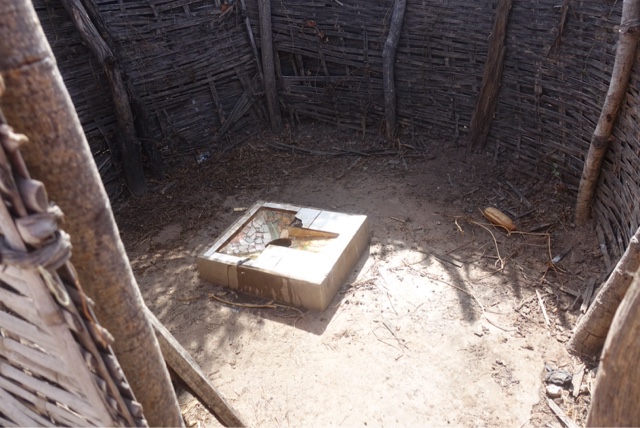 We left the border for a town 40 km away on the roughest road yet.  It took three hours!  Once we got to Kounsitel we had 45 minutes to change money- 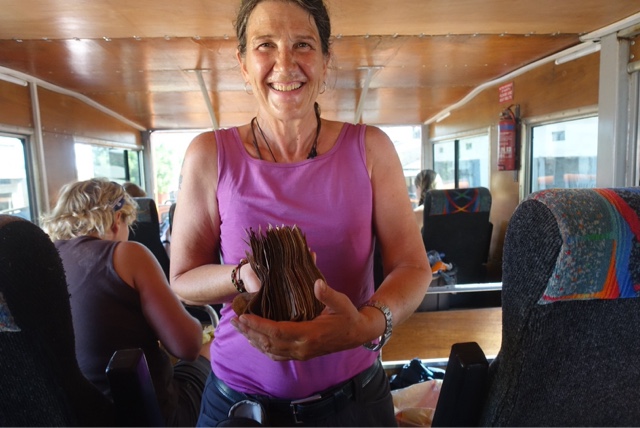 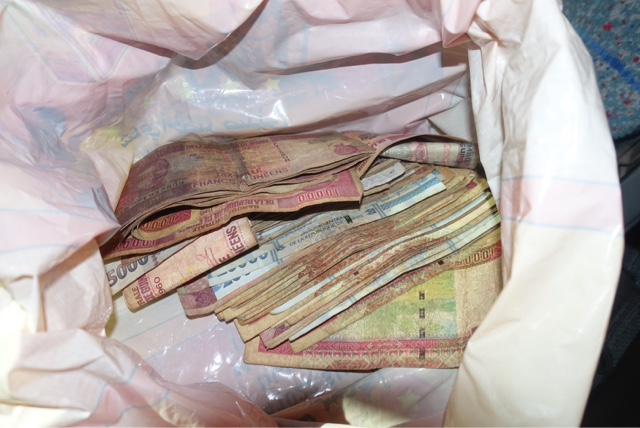 The money is filthy and well used!  Next, Brad and I found a local restaurant for lunch which was rice covered with sauce and delicious meatballs- 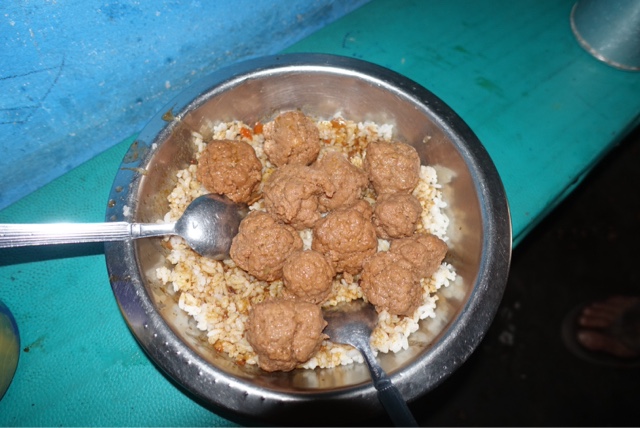 A 'fixer' had heard we were looking for beer so he took us to the only shop that sold it but because it was Sunday, it was closed.  He took us to a private home and they sold us some!  I also used their private toilet.  It's so funny.  Imagine someone showing up at your door asking if you had beer for sale and if they could use your toilet!  TIA!
Pulling into Kounsitel, the road became pavement and continued to be awesome so we made good time.  Along the way- 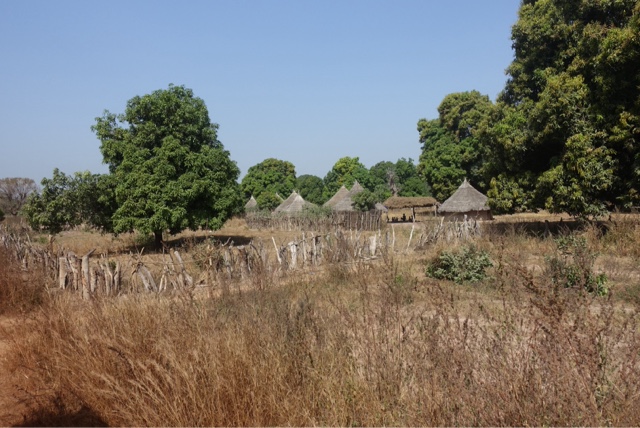 We came to a town that was hopping- 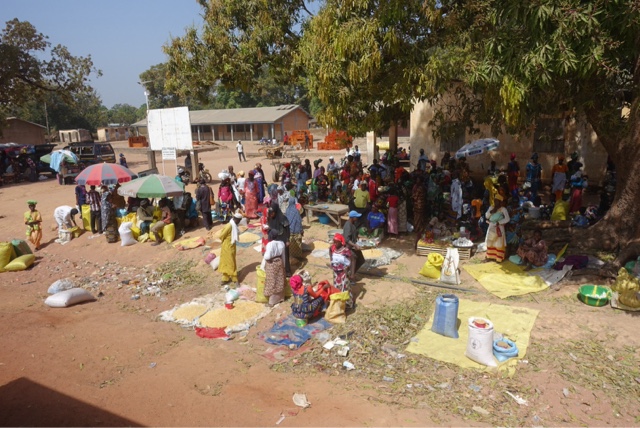 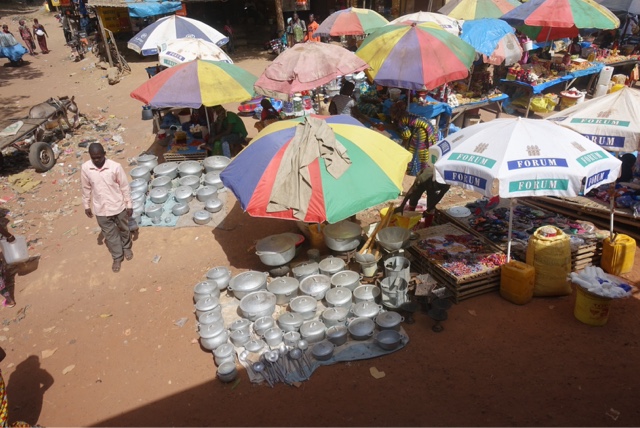 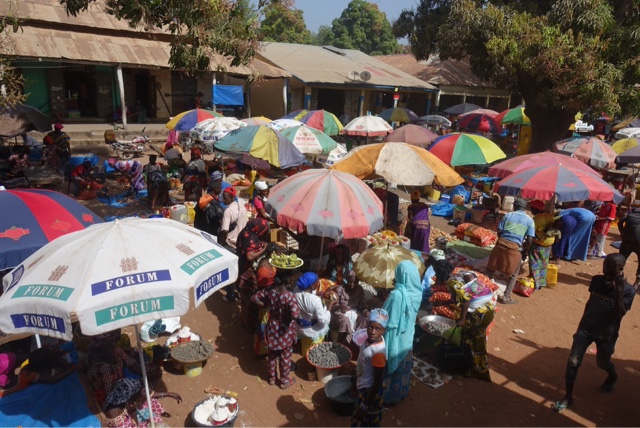 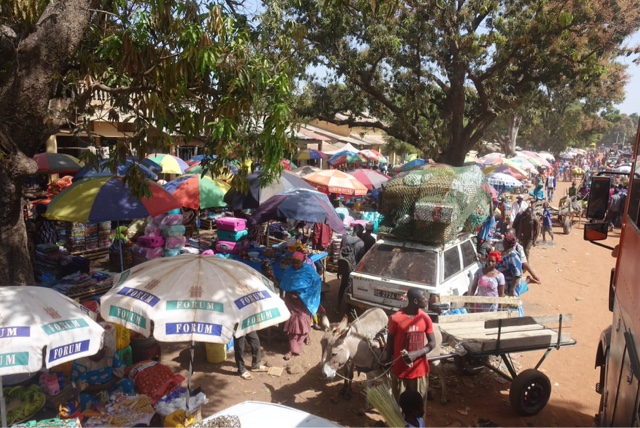 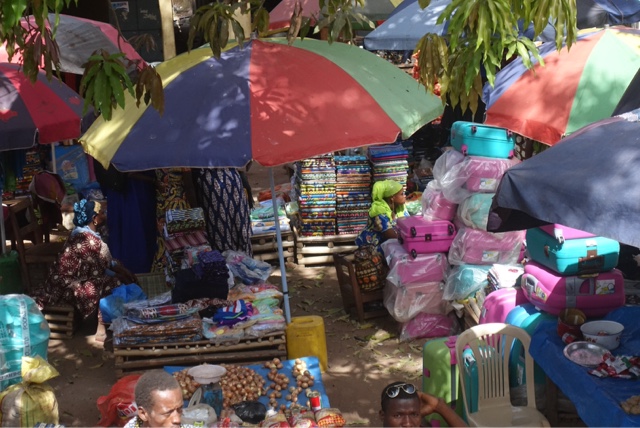 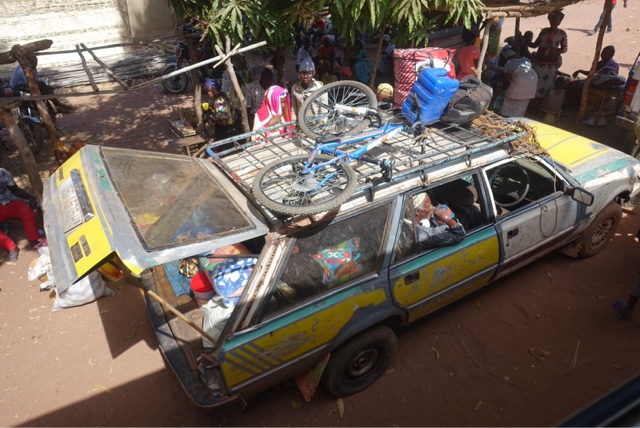 Most people are very friendly - madly waving and shouting as we go by.  Kids especially- 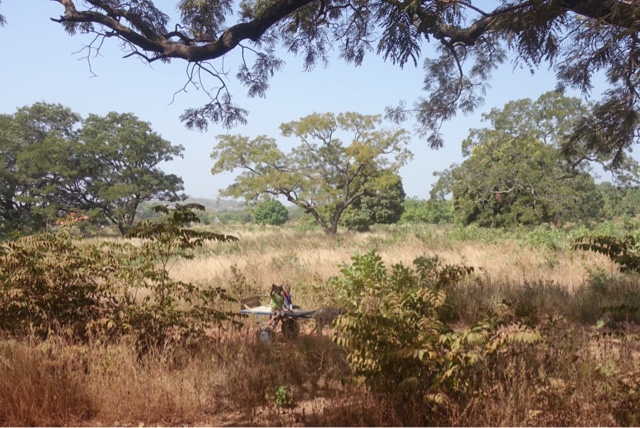 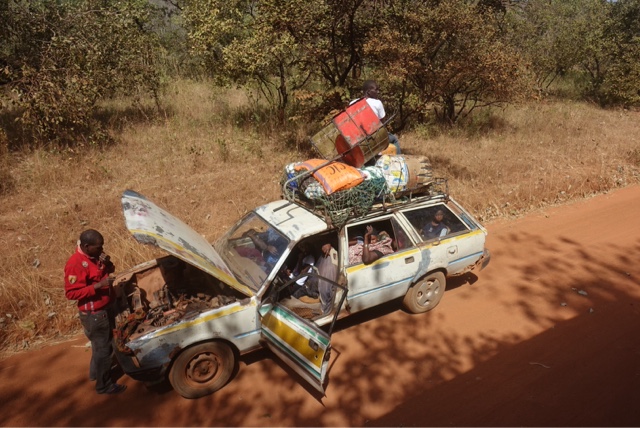 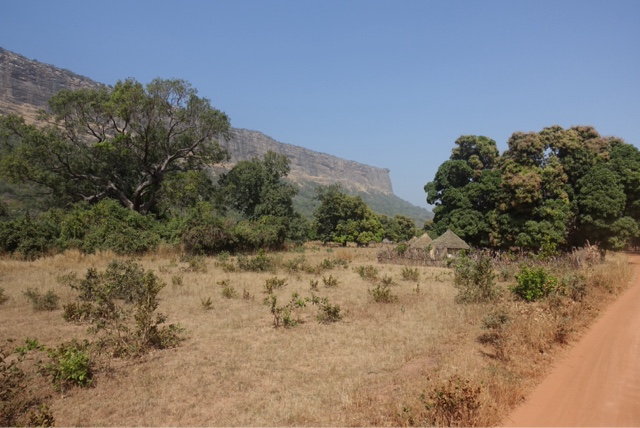 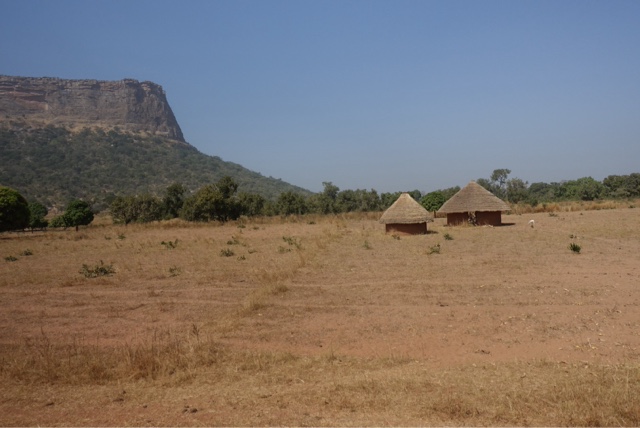 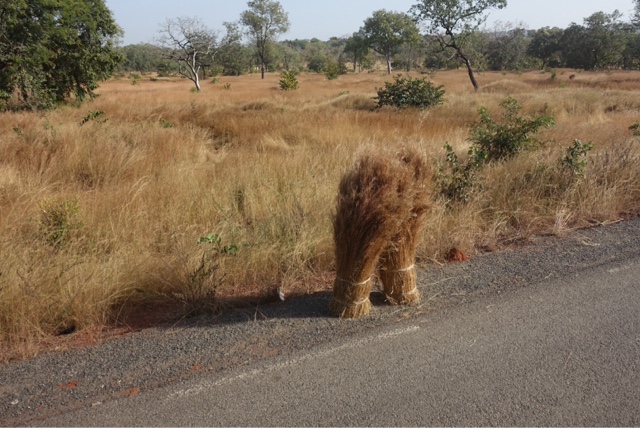 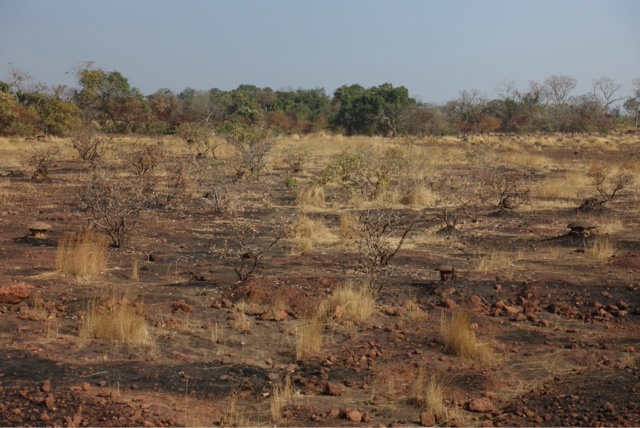 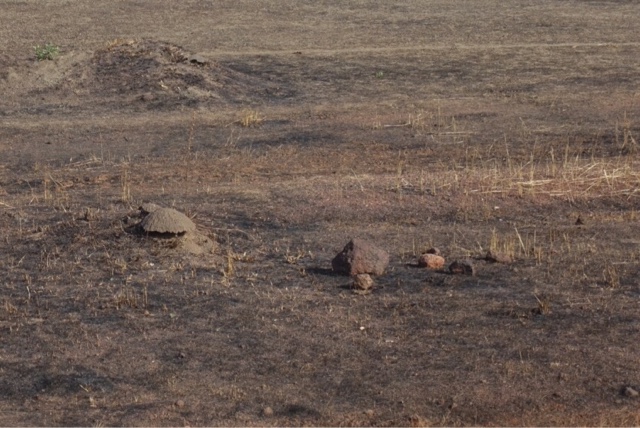 We pulled into what looked like an abandoned gravel pit to set up camp.  Norm, Terry and I were on cook group and we had to cook on WOOD!  I wasn't very happy about that but with Richard's help and some charcoal, our black bean burgers cooked perfectly and we were all done shortly after 8!  I'm hoping for a great sleep under the full moon and in the quiet!
at December 24, 2018