My sleep was pretty good and nobody really got moving until about 6:45. I appreciate that. We were on the road by 7:45 on our way to Azofra which is 22.3 km away-

I didn’t set a new intention because I’m still working on just walking rather than concentrating on how many kilometres I’ve walked.  Maybe tomorrow I’ll expand my thinking.

We walked through beautiful countryside – 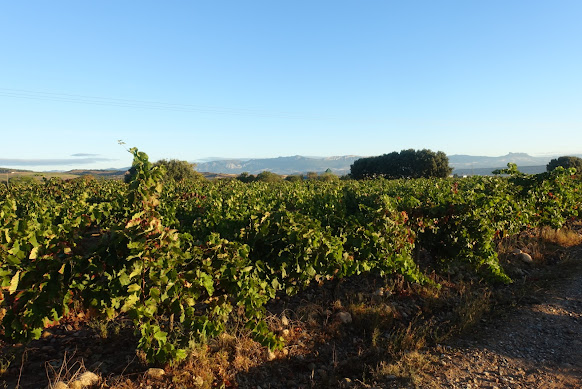 We came across an interesting cemetery – 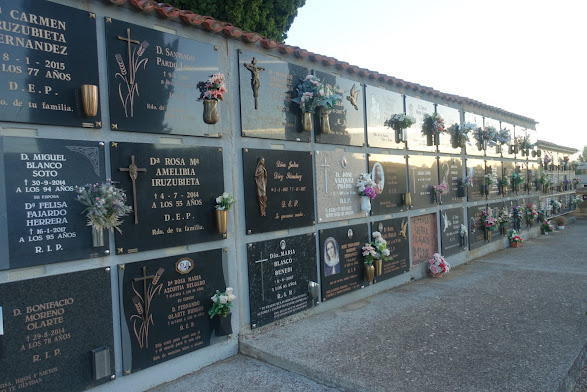 We also ran into Honza. I met him yesterday while walking. He slowed down a lot to visit with me for about an hour and a half.   He is in his early 20s and from the Czech Republic. I said “Oh, you are from Chechia.”  He said “No, we do not like to be referred to like that. We are Czech Republic”.  Good to know I thought. He told me that he was living at the Mamahotel which is living at home with his parents when one day his parents told him that maybe he should go on a trip. Well, unfortunately for them, he has never looked back nor has he moved back home. He comes home for a few days a year – just to renew his passport or get certain visas. He has travelled all over the world and has no thoughts about quitting. He has the best laugh and is so funny and positive. It was a joy to walk with him yesterday and a great surprise to see him again today.
We came across some grape pickers. One of the men was black and said “don’t take my picture” so I think he is an illegal alien. I was surprised because they use scissors to cut the grapes off the vine.  I thought they picked them like we pick Saskatoons-
– 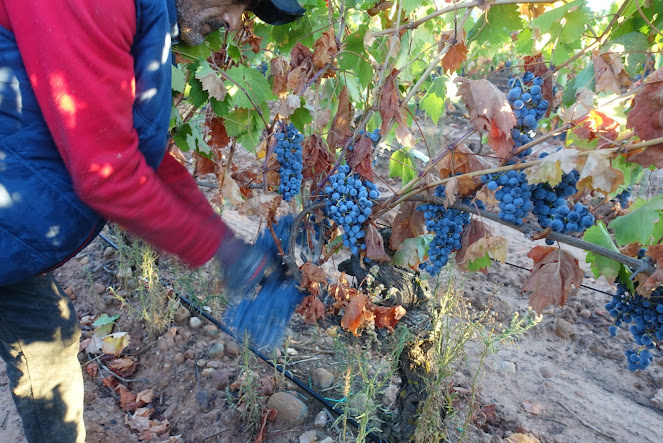 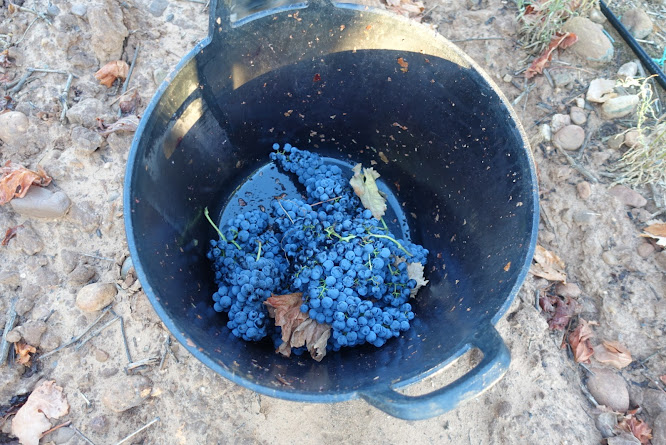 A tractor comes along with an enclosed trailer and picks up the grapes. Apparently there is a machine that pulls the grapes from the vines and I will look for it tomorrow. We found some grapes lying on the ground so we enjoyed them. They were delicious – 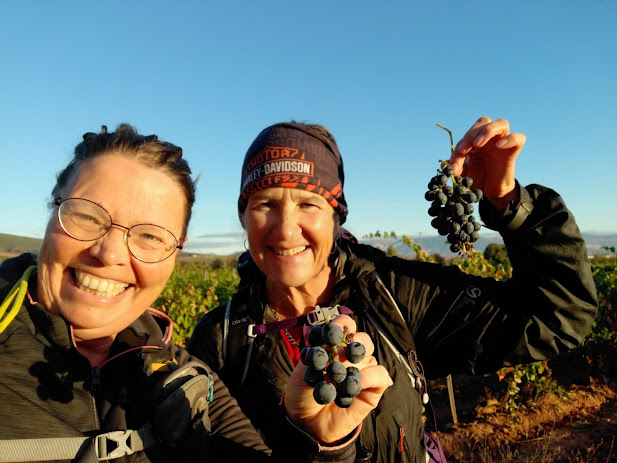 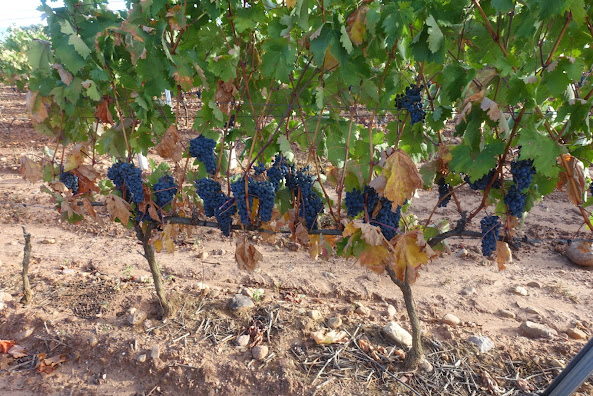 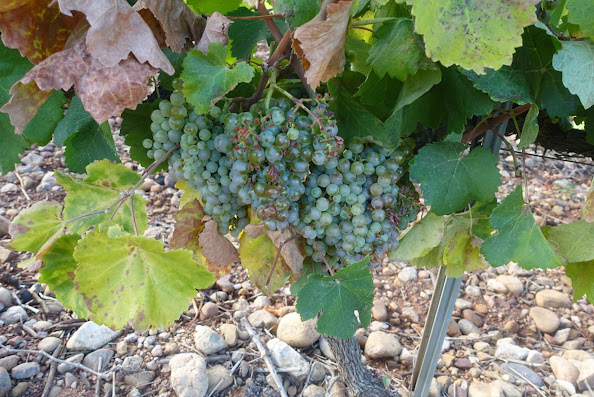 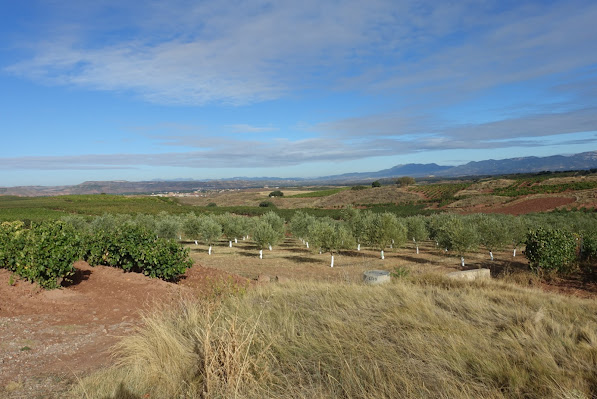 We avoided this village to save a few kilometres- 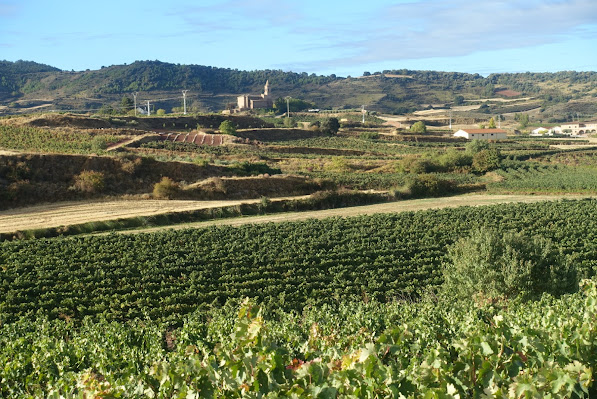 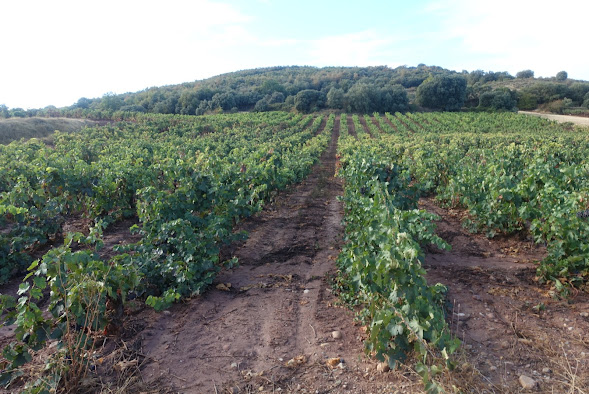 Hórreos are used to store corn.  That’s Emily from Australia- 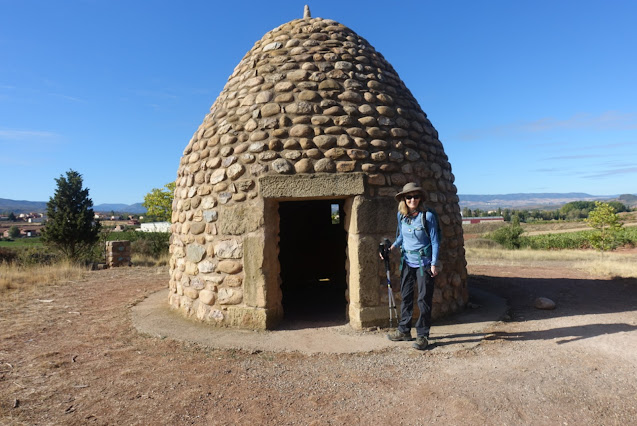 It’s chile season! It’s odd to see them in places like in front of this stationary store – 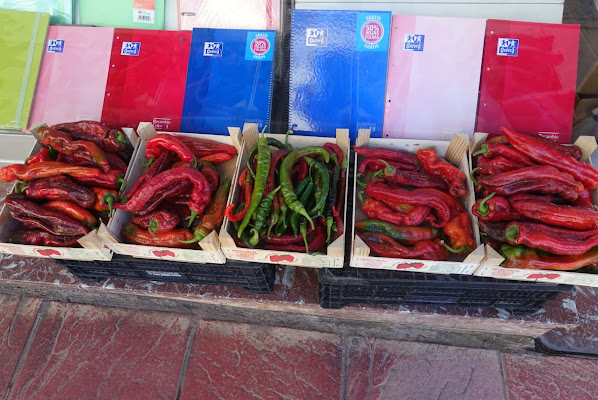 We stopped in the monastery of Saint Maria La Réal in Nájera. Four Benedictine monks lived here until 2017.  This hallway leads to the cloister- 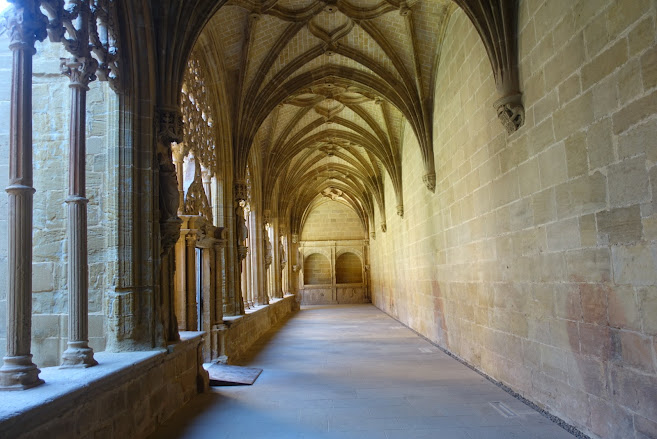 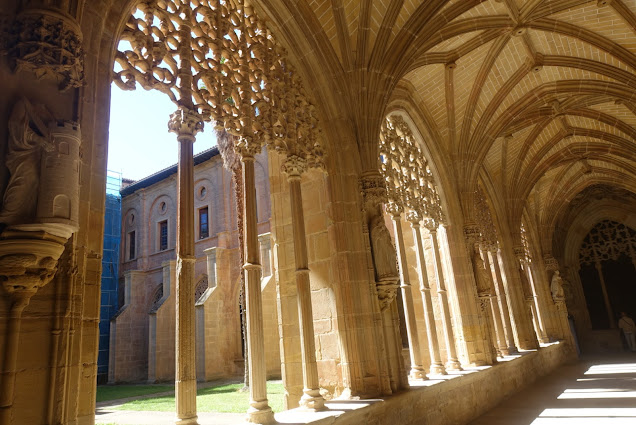 The cloister is the outdoor lawn area- The altar is similar to others we have seen and it’s interesting to note that politicians at the time are also represented here.  It dates from 1692 and is in Baroque style which means columns, an abundance of decoration and detail, grape clusters and other details from this region – 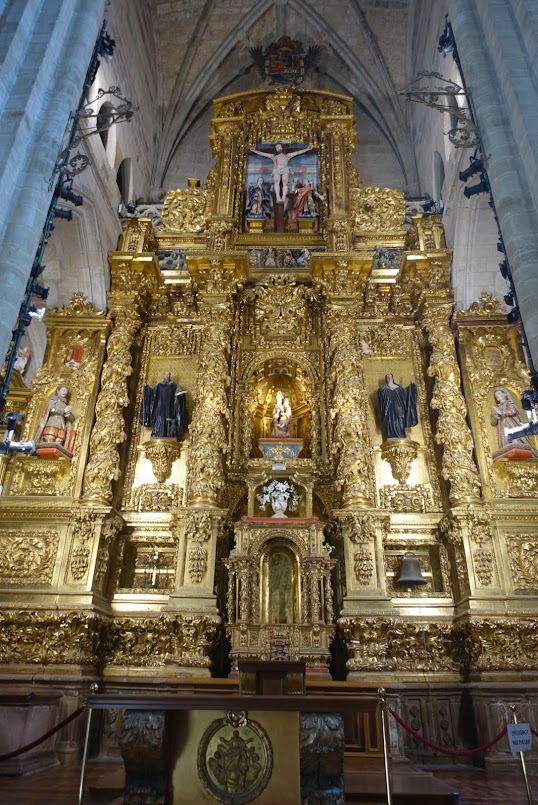 Napoleon came along and used the monastery as a residence for his soldiers. They chopped  the heads off  most of the saints – 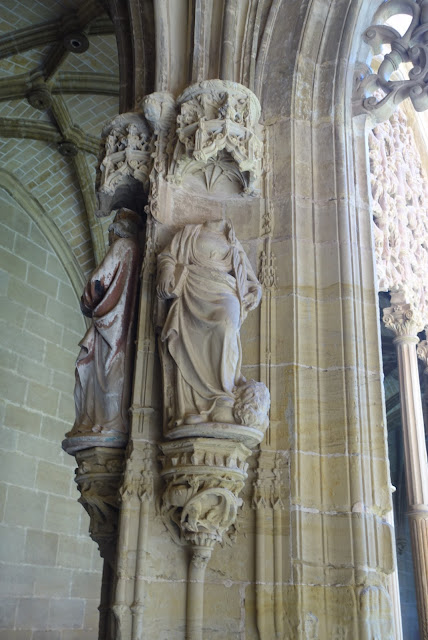 There are a lot of tombs in various rooms- 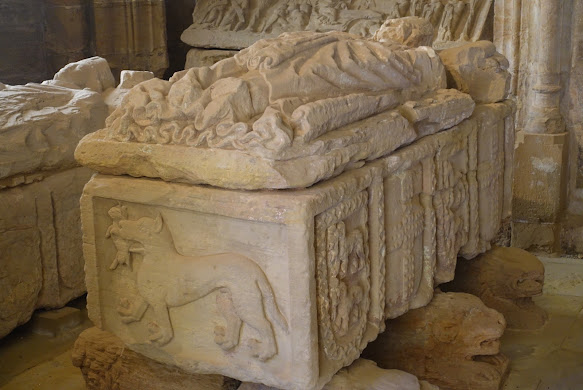 There was also a small exposition showing this 15th-century wooden bust of San Andres. I love his eyes!  The hole in his heart symbolizes his martyrdom – 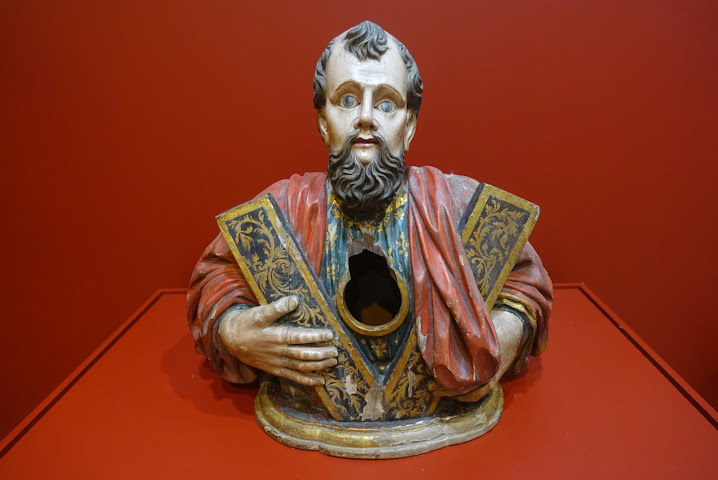 We left Nájera for Azofra which was 6 km away. Where I’m going- 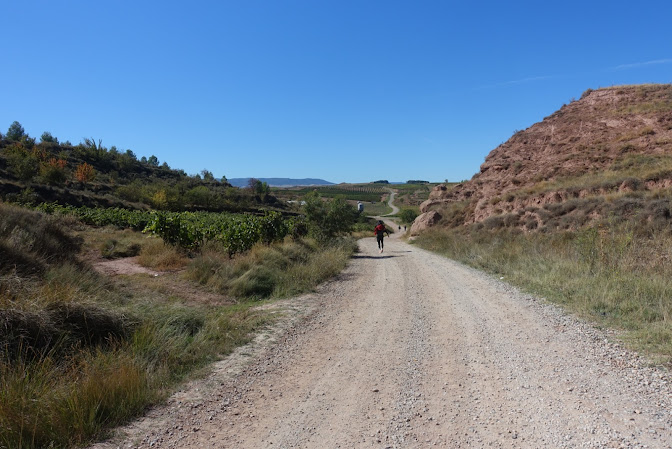 And where I’ve been- 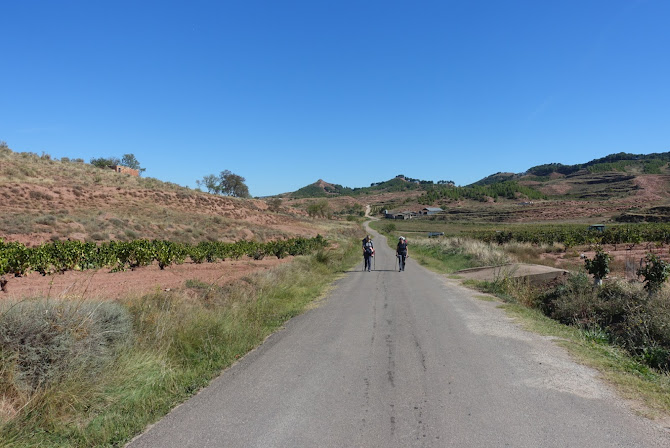 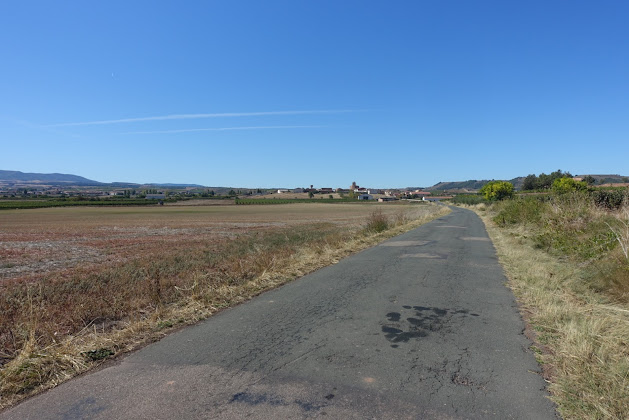 They irrigate the vineyards – 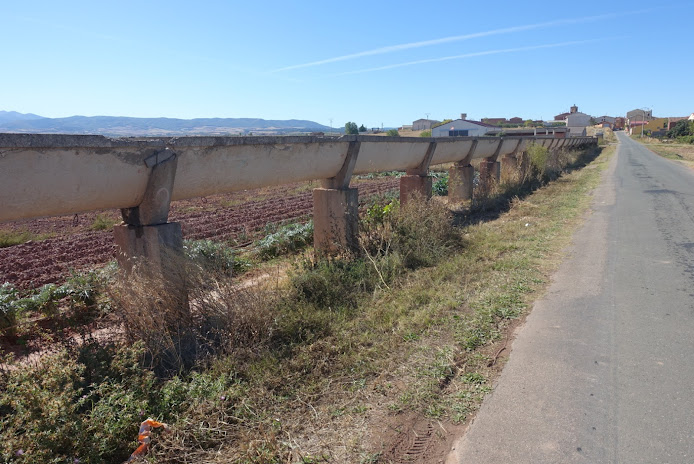 A pretty house in Azofra- 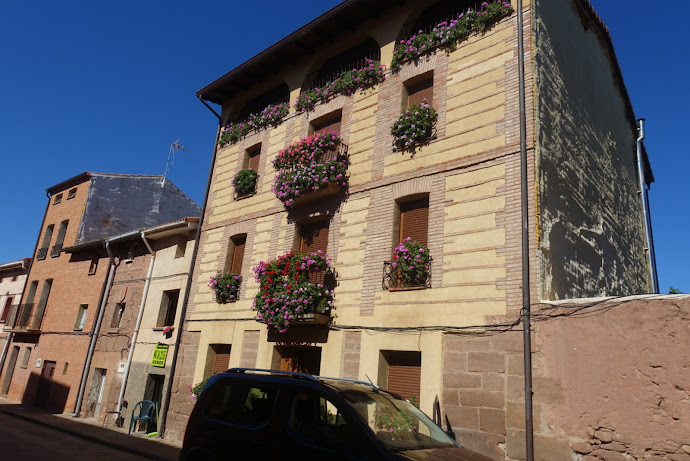 There is only one albergue in town but all the rooms are twins.  Unfortunately it is not a soundproof building so someone will be waking us up in the morning.  We just can’t get away from that- 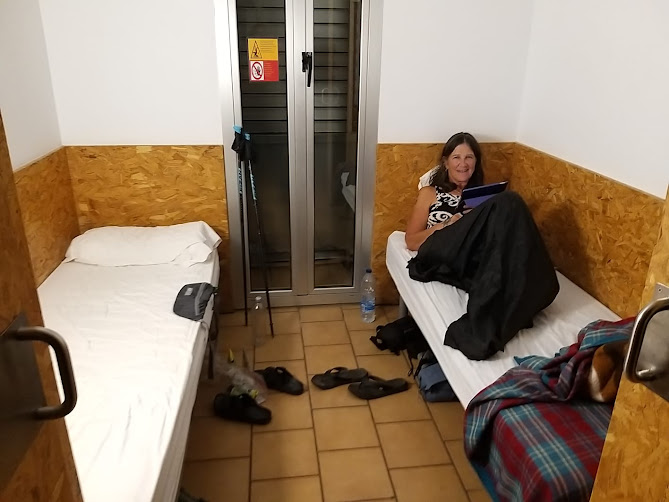 A few of us met at a restaurant for wine, we are in Rioja, and supper. Mine was veal Cordon Bleu but it wasn’t the best because it was deep-fried.  The company however was great :  Jane from Iowa, Anita  from Germany, Gary from Iowa, Evelyn from Switzerland, me, Bernadette from Switzerland, Michèle from Sherbrooke and Hum from South Korea- 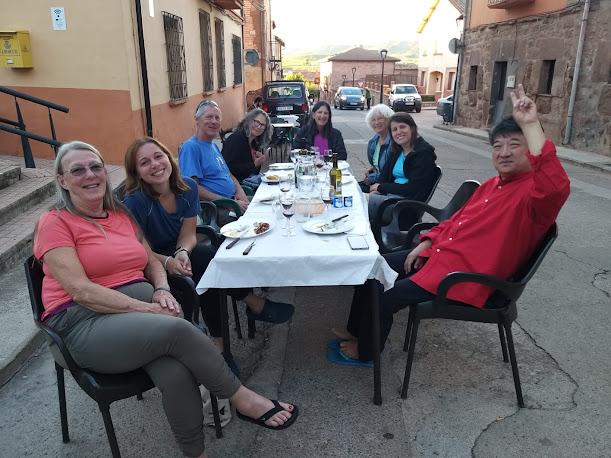 Tomorrow it will be another 22 km walk to Gronon. I hope it is as and as pretty as today.