I started the day off right- 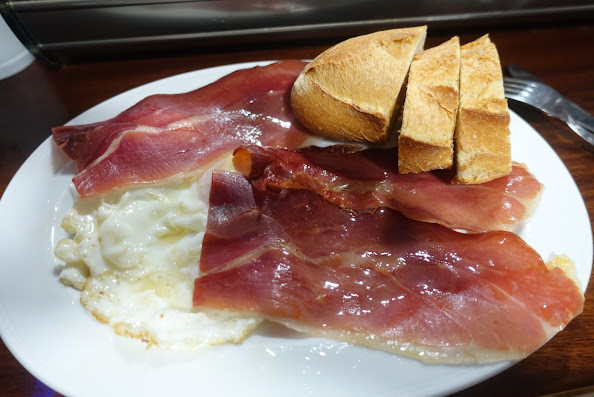 The restaurant opened at 7 but the cook apparently is always late, showing up usually 5-10 minutes late.  Wouldn’t you know it, today was even later, just because, as the barista told me, I was waiting.  What was really cool though was the fact that I understood just about everything he said .  I was very proud of myself.

Shortly after leaving Rabé de las Calzadas, we entered the Meseta which means plateau.  I like it because it reminds me of home but some people skip it completely- 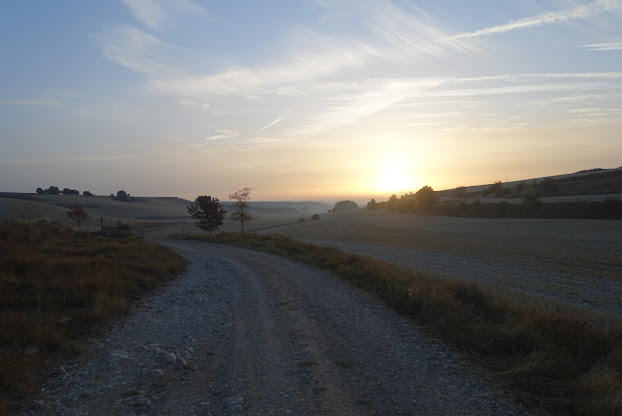 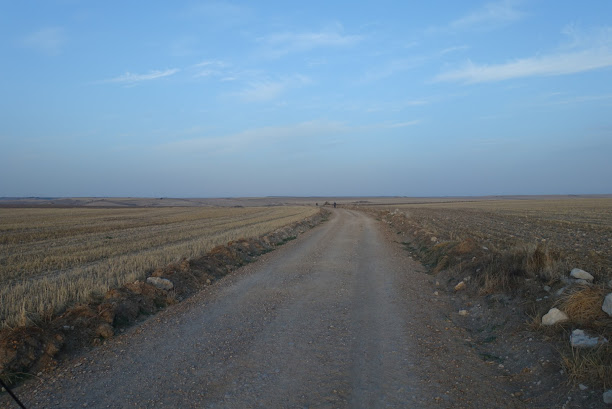 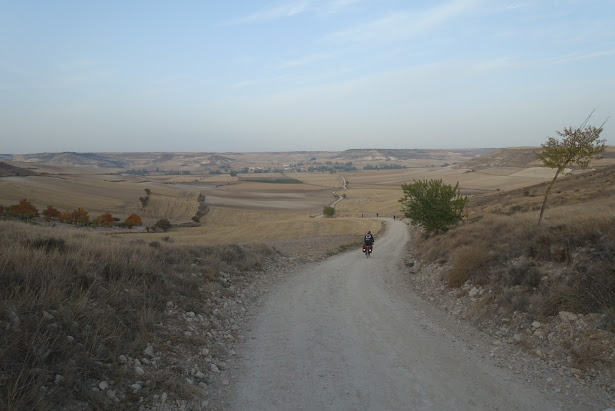 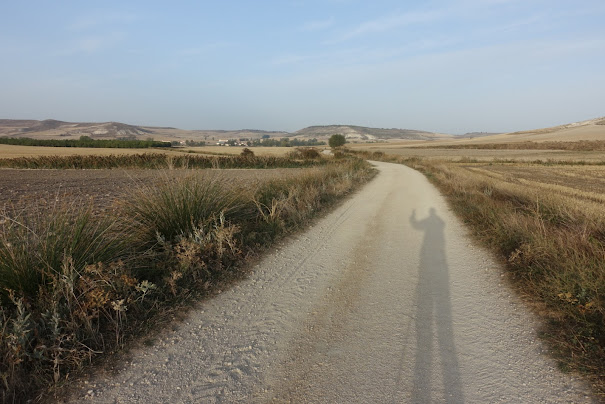 I feel really good .  A wise friend told me “ I think we start to question why am I travelling so far, is it making me happier? It does … experiencing new things and places should be part of our life goals  but I  think I don't require the length of time away as much anymore,  I can have new experiences but in shorter  time frames. The more I travel the more I realize we live in one of the best countries on the planet. Perhaps we  need to explore that more. I think if you settle into the realization  that this is your last long trip it will make it easier and more meaningful as well as peaceful for you.”  Makes a lot of sense.

And so, my intention for the day was just that - enjoy this trip knowing it will be the last long one and I’m okay with that!

The first village was Hornillos which I recognized- 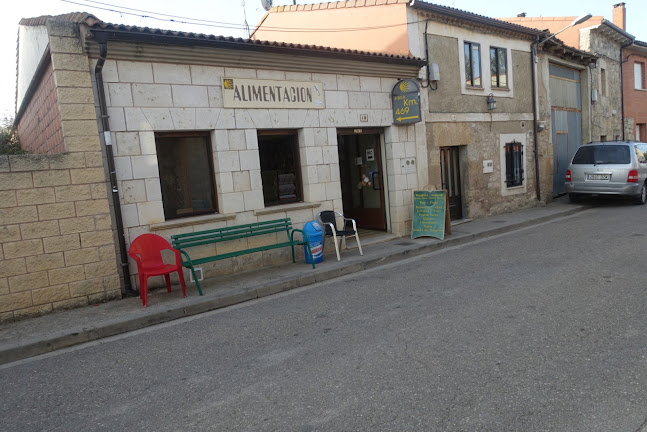 Four years ago, I sat on this very bench to eat a bocadillo and drink some wine - just like today- 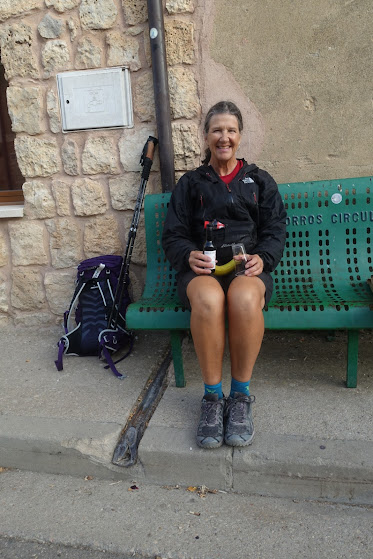 It’s called the 469 café because that’s how far we are from Santiago.  The Gothic church of San Román, built in the 16th century, was closed- 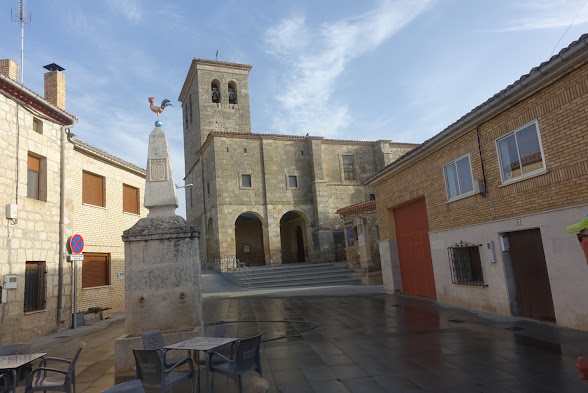 but there’s an interesting fountain- 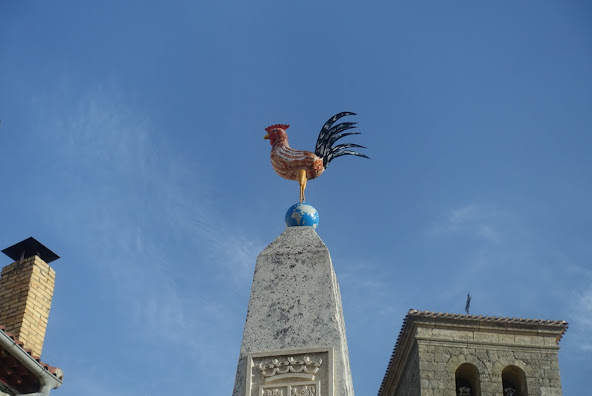 There’s a legend that when Napoleon’s troops were defeated after the War of Independence, they were walking through the town and they were hungry.  Seeing that everyone was at mass, they stole the chickens and roosters, killed them and stuffed them in their drums.  After mass, the people noticed the animals were missing so they asked the soldiers who denied knowing anything.  A woman prayed for an answer and a dead rooster came back to life and crowed.  Since then, the rooster has been the symbol of the town. 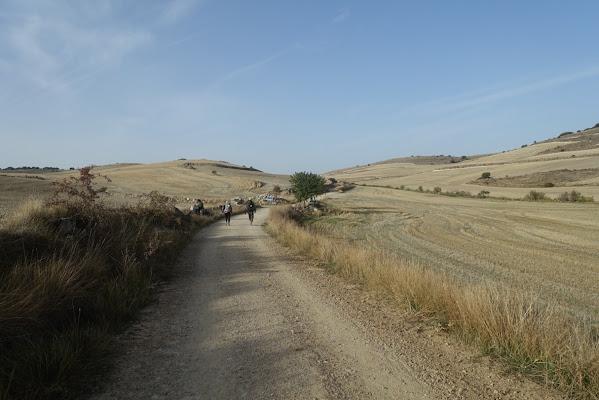 Helle having a rest- 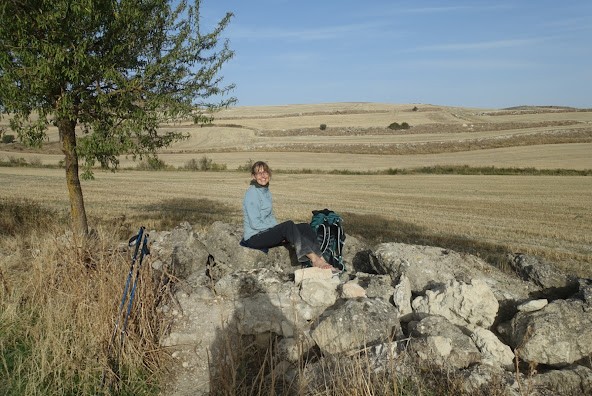 Not long after leaving Hornillos, a woman named Anita Grace, just appeared at my side. She started talking about the reason she was on the Camino again, for the fourth time. She is writing a book and is looking for inspiration. She hopes it will be published in January and it is called Return of the Goddess.  It’s about 13 ways that the energy is changing in the world. We walked together and talked about it for about 15 minutes and then poof she just fell back and was gone. I look forward to reading it. 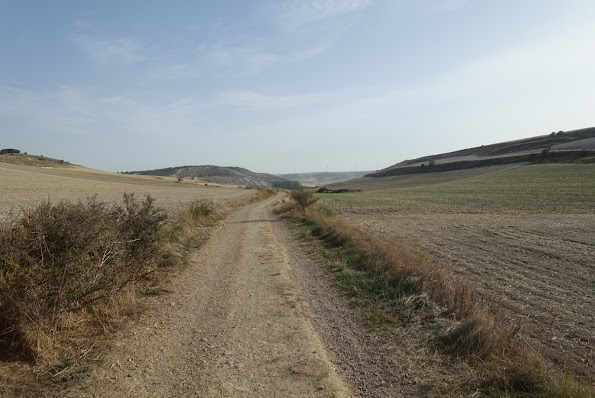 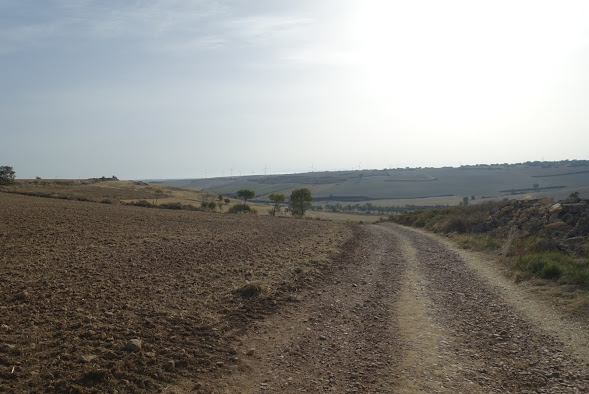 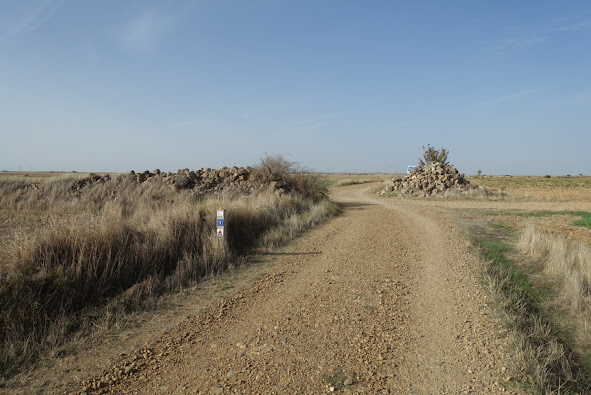 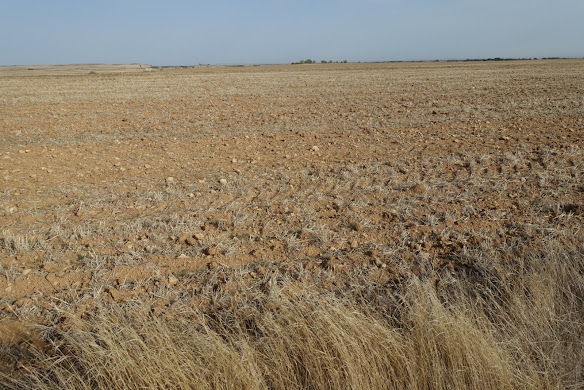 San Bol is known to have healing waters in its pool.  It’s a couple hundred meters off the trail so I went and soaked my feet for awhile.  The water was very cold and my feet felt better afterwards so…. 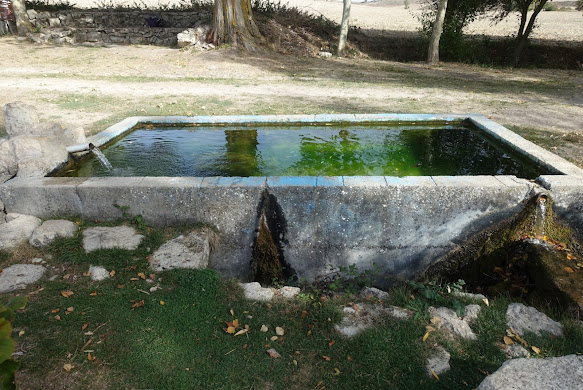 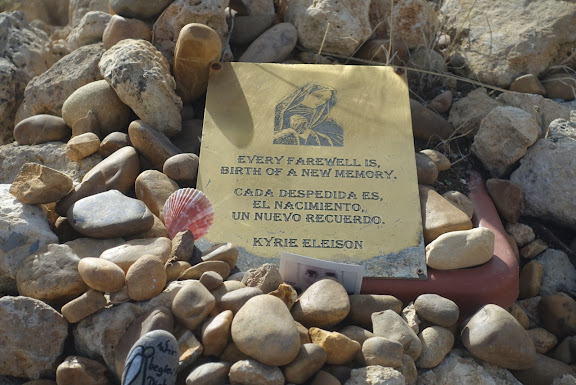 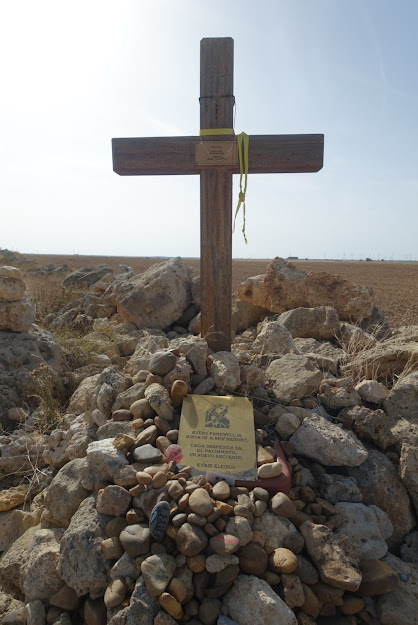 About 1 pm, I arrived in Hontanas- 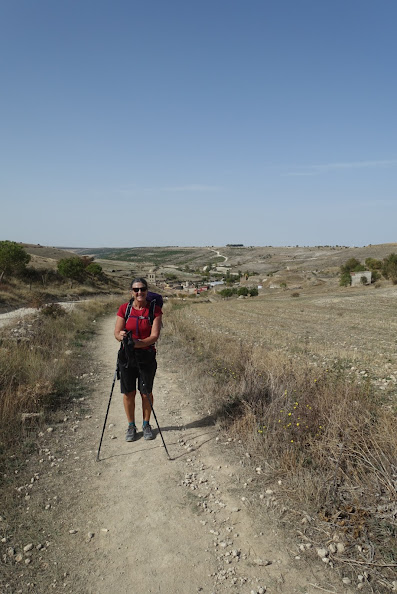 The Albergue El Puntido is nice- 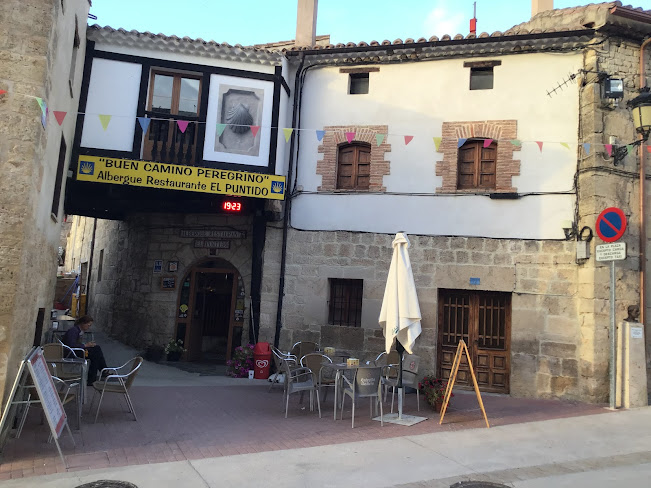 and so is our room which looks like a disaster zone.  Everyone hangs up their damp clothes to dry for tomorrow- 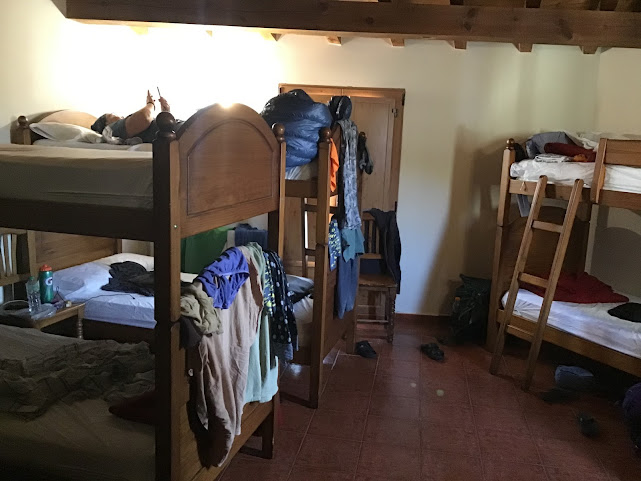 After a couple of beer, a hamburger with a fried egg and some fries, I was ready to check out the town.  The church is special- 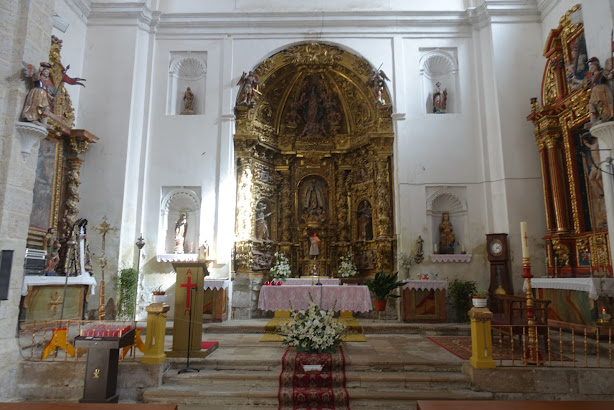 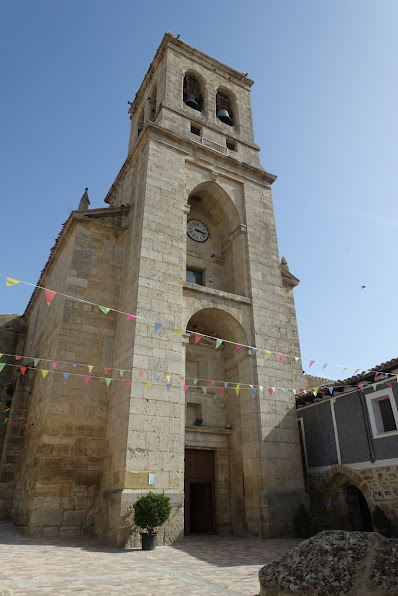 because they have music playing , a comfortable place to sit in front of the candles and Bibles available in many languages- 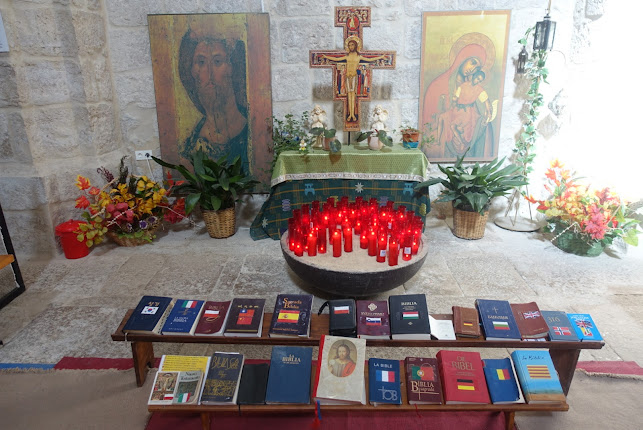 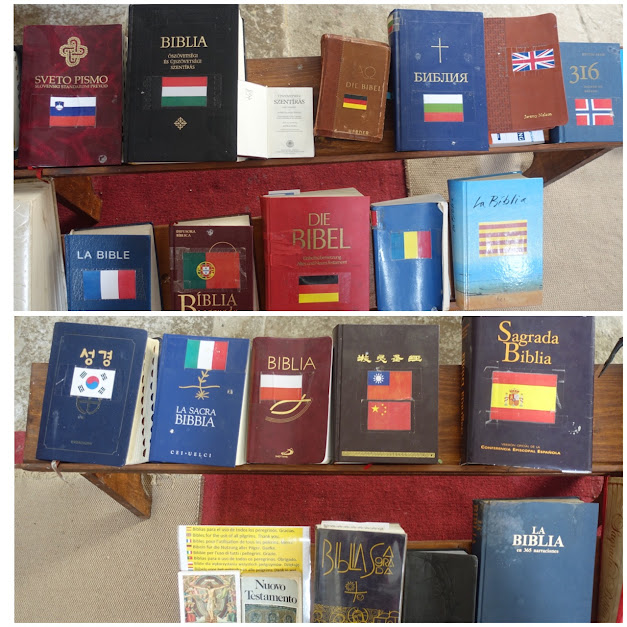 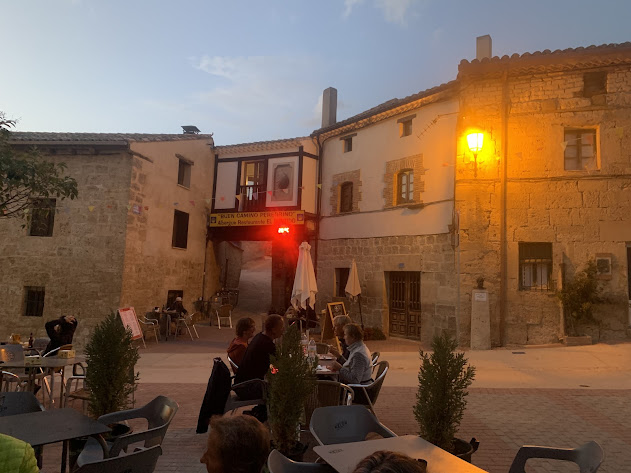 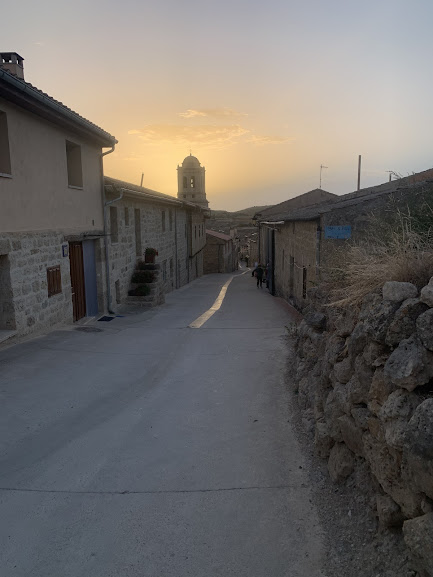 We had some difficulty getting four beds in the same hostel in Itero de La Vega for tomorrow but eventually we figured it out. That’s our destination and I’m looking forward to continuing across the Meseta.