My sleep was pretty good but I still felt tired when I woke up. My leg feels bruised from the heavy duty massaging last night but it doesn’t hurt to walk.  I have no intention today - I’m just going to enjoy my day off.  It sounds like I’ve been working rather than doing something for enjoyment?  (Wrong word, definitely the wrong word).
The sky was beautiful from our balcony- 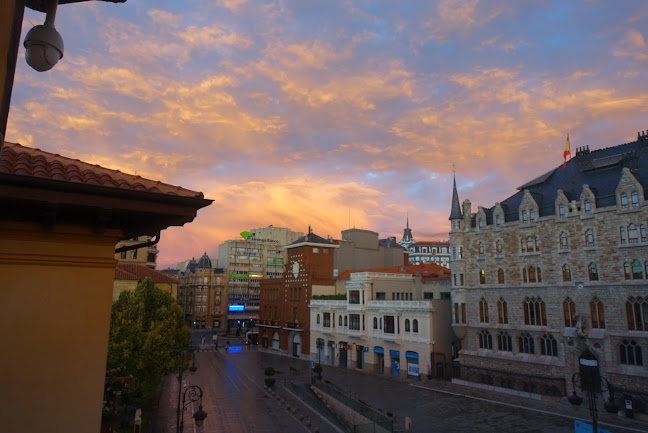 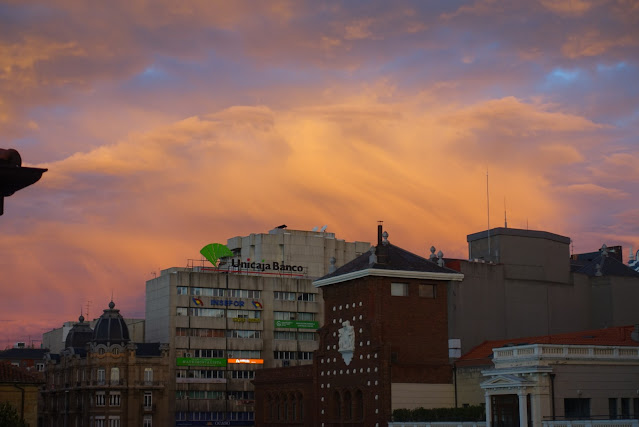 We four had breakfast together and then toured Casa Botines which was built by the famous architect Antonio Gaudi.  Most of his work can be found in Barcelona but he has buildings in a few other Spanish cities – 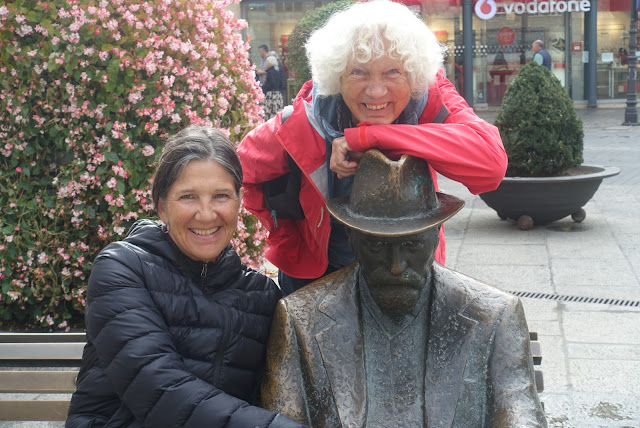 Casa Botines opened in April 2017 for the first time in 125 years. It was commissioned by a bank and built between 1891 and 1892.  From the outside it looks like a fortress- 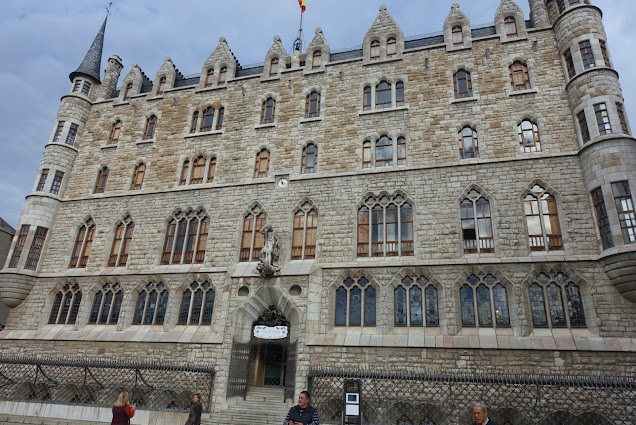 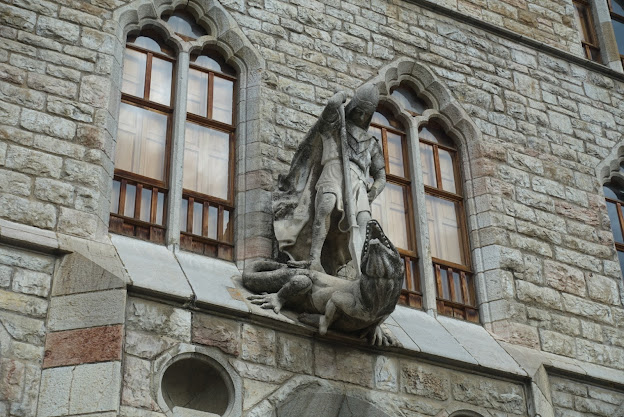 Gaudi was way ahead of his time.  He used a lot of natural materials in his construction and understood the importance of light.  Turrets were all windows so not only could light get in, but the rich could be seen by the public- 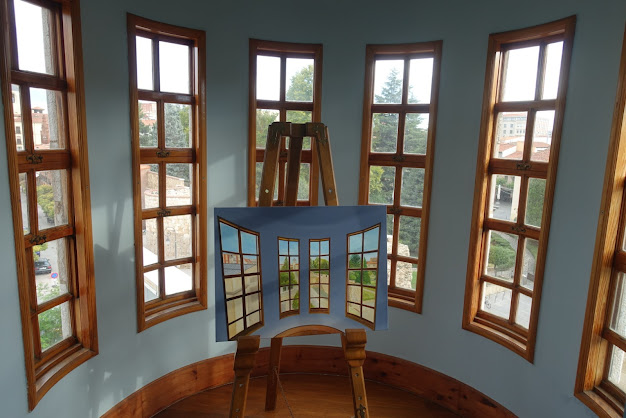 There was also an art display of every day life.  José Cusachs y Cusachs painted Calvary Regiments in 1899- 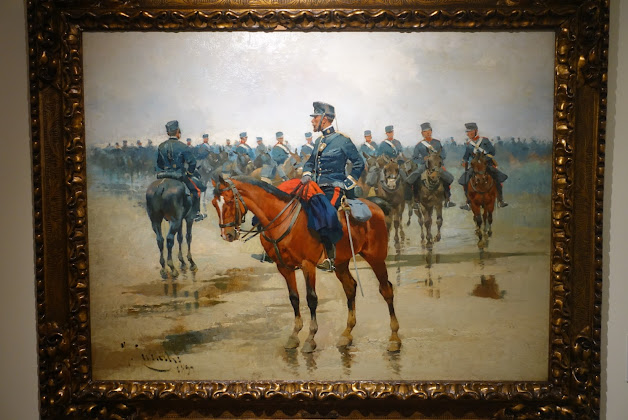 The most interesting exhibit for me was about Dante’s Divine Comedy which after today I will try to read.  It’s a very long poem about hell, purgatory and heaven.  It was written 700 years ago and is influential for many artists today including José De León who painted Dante and Virgil, a walk through Irreality 2021- 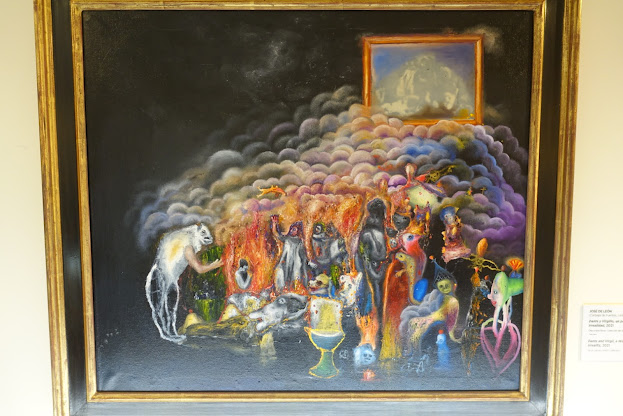 Another one I liked was Human Race - Dante’s Inferno 2022- 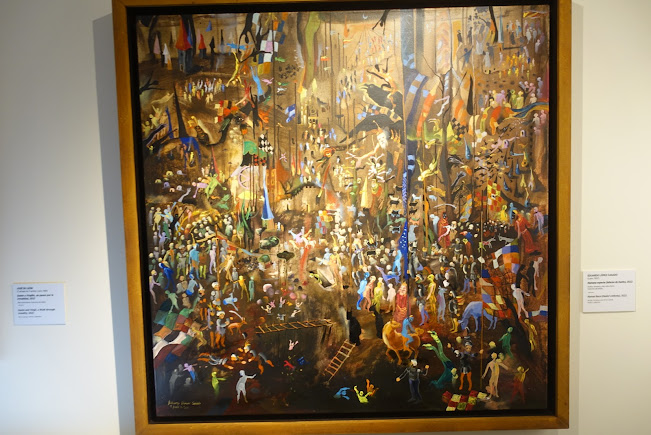 According to the museum, the comedy is one of the most ambitious and perfect works of universal poetry.  It’s a handbook for the improvement of the soul and a great encyclopedia of Western knowledge.  As Dante travels through hell, purgatory and heaven in his own life, he rediscovers the lost sense of his existence.  Dante realizes that humanity has been lost because of envy, ambition and pride.  In order to become truly human, we must learn from the mistakes of our ancestors and assimilate the legacy of ancient tribes and Christianity.  The comedy is the most in-depth study of the human soul ever.  It includes all the universal knowledge he was able to glean from the 14th century.
The Basilica de San Isidore was consecrated in 1063- 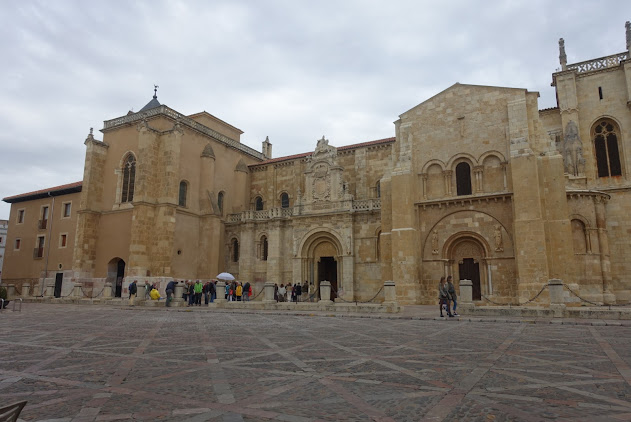 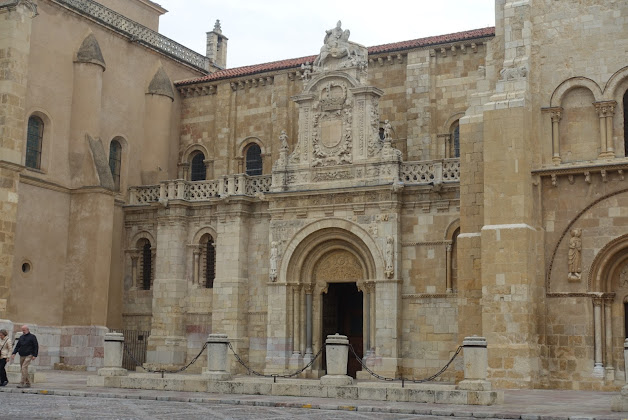 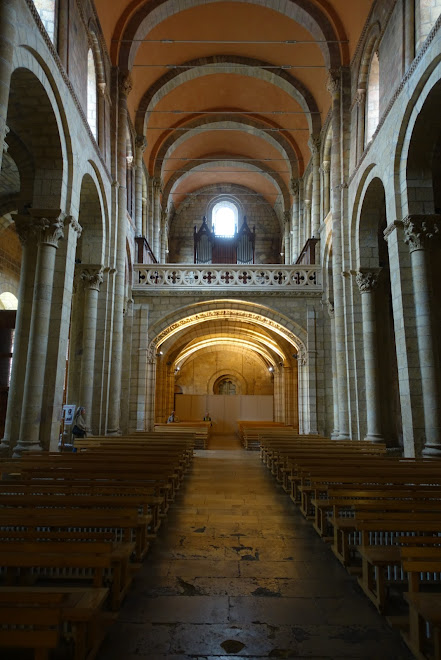 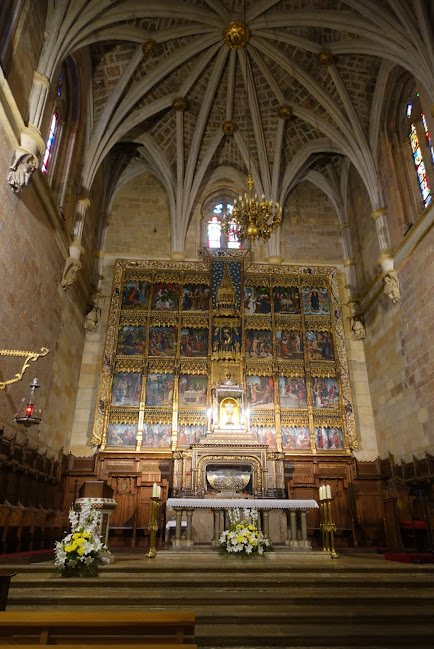 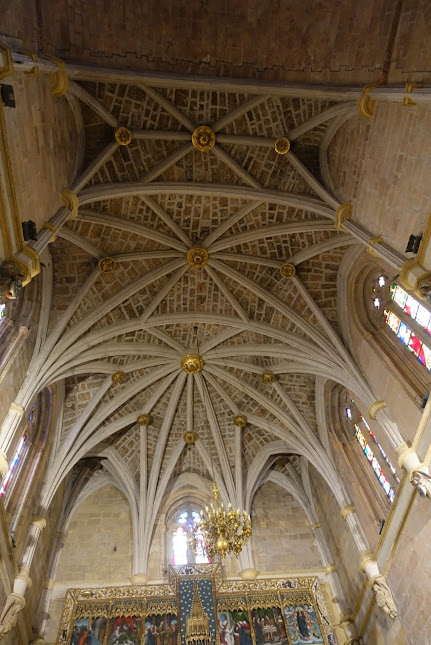 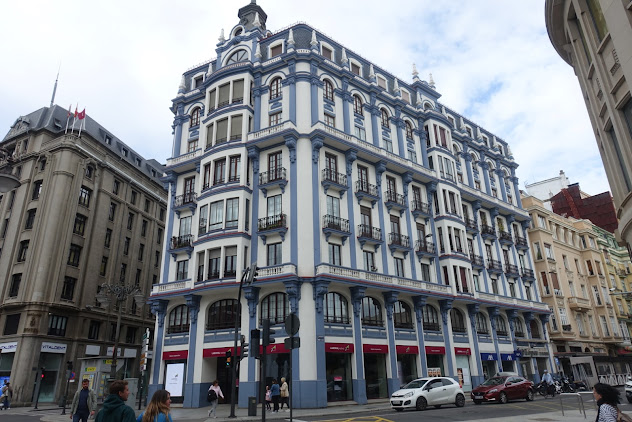 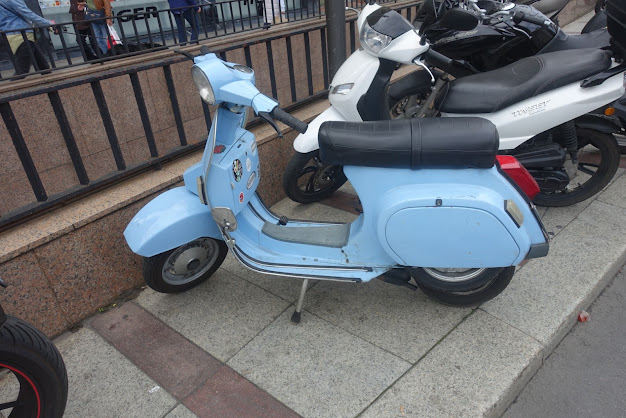 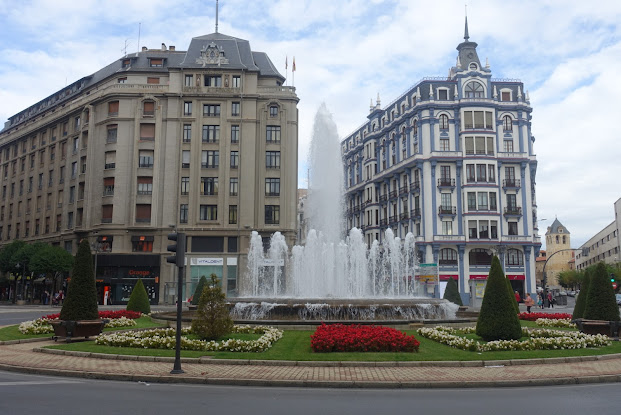 The Palacio de Los Guzmanes is right beside Casa Botines and is built in renaissance style. It is the seat of the provincial government of Leon. It was built in the 16th century for the wealthy Guzman family – 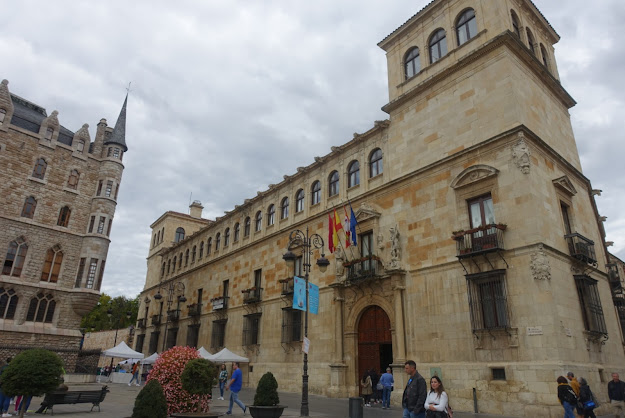 After a rest, we went looking for something to eat and found a very busy area – 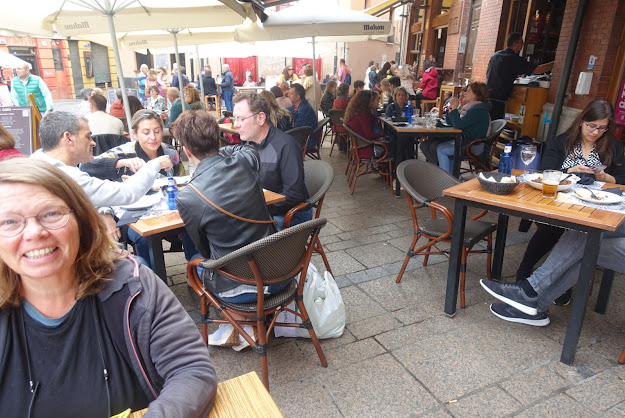 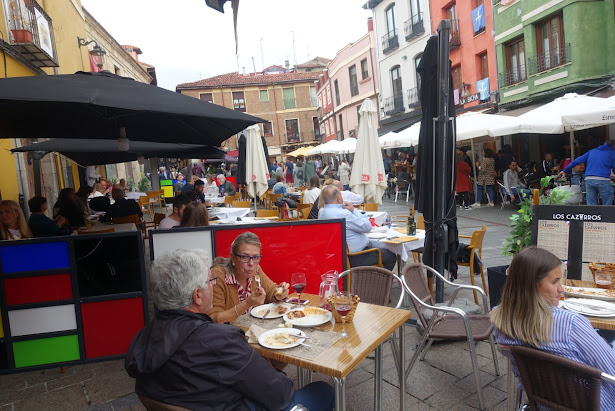 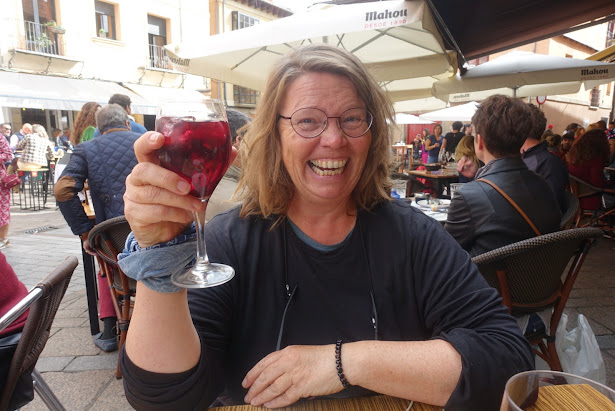 and we had free tapas- 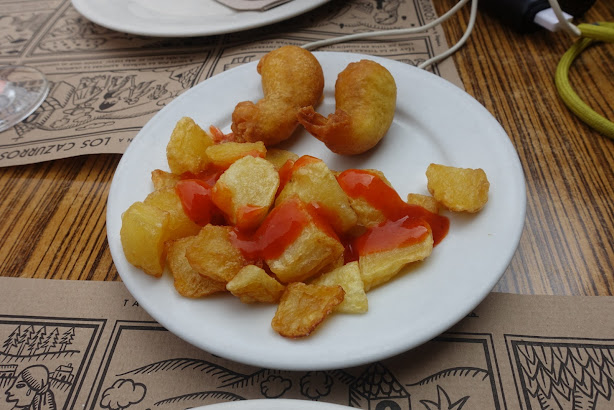 We ate mushrooms with a blue cheese sauce and hot spicy potatoes? with an alioli sauce.  They weren’t hot nor spicy – 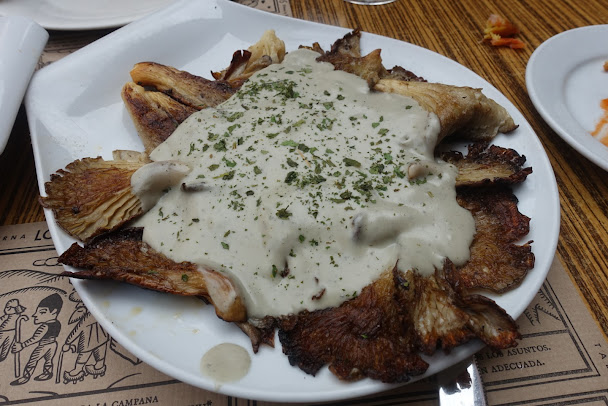 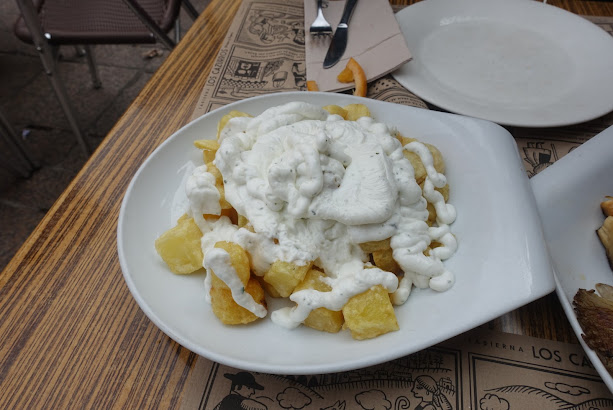 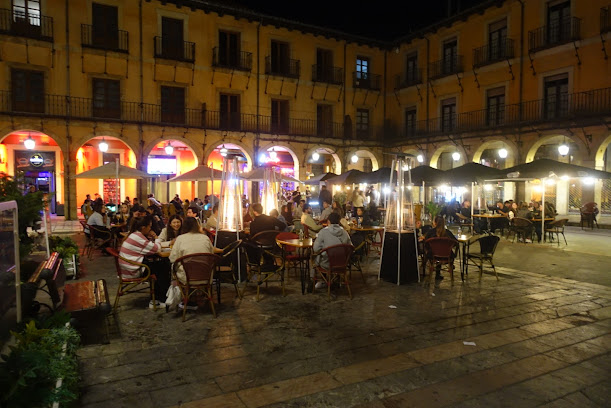 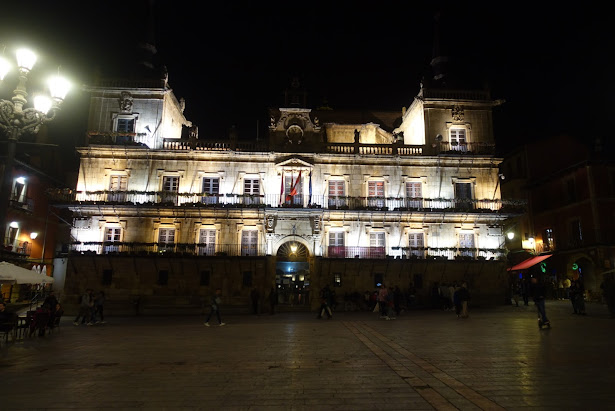 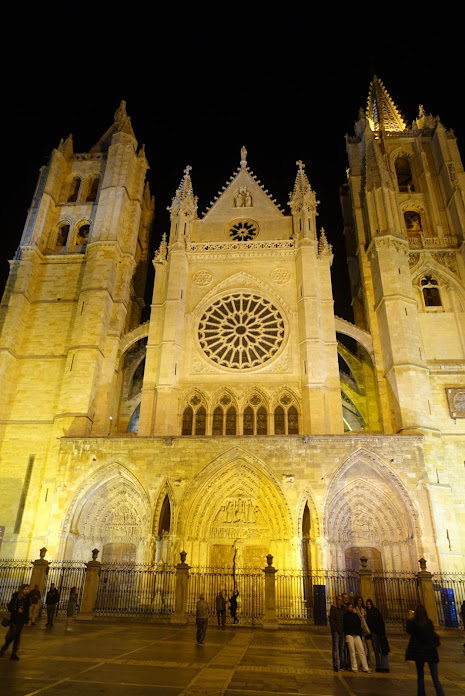 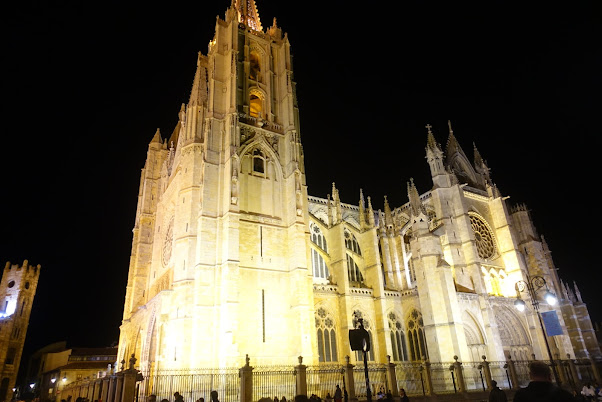 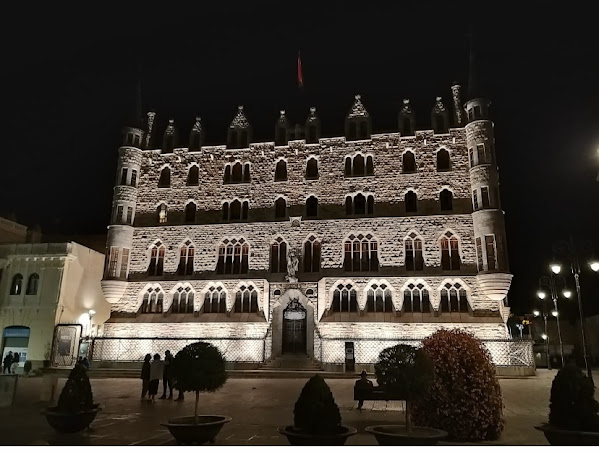 I have mixed feelings about starting to walk again tomorrow. I’m wondering how my leg will do, if I should take the alternative route which is not along the busy highway, how far I should go and if I should carry my pack or send it along. I will probably end up going the main route, carrying my pack and making out just fine. Sort of looking forward to tomorrow!
at October 15, 2022