We had a later start so my tent was pretty much dry when I packed it away.  Our first stop was for water and then we found a random heritage village which looked great from the outside-

The walls and turrets have been redone-

The doors are always interesting-

From here we went looking for lunch-

Besides the American invasion, there are other more local foods like nuts and dried fruit-

We carried on and found another heritage village.  Frick!  It was locked but then a random man walking on the sidewalk told Karen we could go in from the back.  Darn!  I thought we missed that one-

They’ve got a lot of work to do-

There are some almost finished apartments inside-

and another great door-

We found a nice spot to bush camp and 4 SUVs showed up from Riyadh to take us to Edge of the World aka Khshm Almwyh.  They didn’t think our coach could get us there so Karen paid, again!  It took about an hour and a half to get there and these Saudis drive like maniacs.  The long drive was worth it- 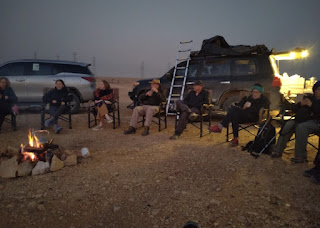 We had some coffee which looks like very weak tea and tastes nasty, then tea with sugar and cookies.  They have a kitchen in the back of their vehicle-

Eventually we headed for home and the streets were alive with not only tons of people but neon, they love neon-

The highway and many streets were often lined with colourful lights.  So strange!

Tomorrow we get to Riyadh and to perhaps a rubby hotel depending on which reviews you read.  We have been warned that it’s not what we have become accustomed to but it’s central and that’s most important.