There were stray barking dogs hanging out close to our tents last night.  So annoying.

Our first stop today was at Diriyah which is the birthplace of the first Saudi State.  It was also a crossroads for pilgrims and traders on their way to Mecca.  Today it is home to one of the Kingdom’s most ambitious heritage developments - Al Turaif which was the original seat of power for the Al Saud family. In 1727 it was named the country’s capital which led to a unified Saudi Arabia.

In 2010, the Al Turaif ruins were designated a UNESCO World Heritage Site.  As part of Vision 2030, it alone has a target of 27 million visitors by 2030 but the national tourism strategy hopes to host 100 million tourists by 2030!

Al Turaif is an excellent example of Najdi architecture which is a combination of three factors: the need to respond to the hot desert climate, the need for privacy in residential buildings and the need to use locally available materials.  50 billion US has been spent on the area which will eventually include 100 restaurants and cafés, 400 retail brands and more than 20 event spaces.  There are 4 Michelin starred restaurants and it’s anticipated that the development will add 7.2 billion US to the Kingdom’s GDP and provide 55,000 jobs. 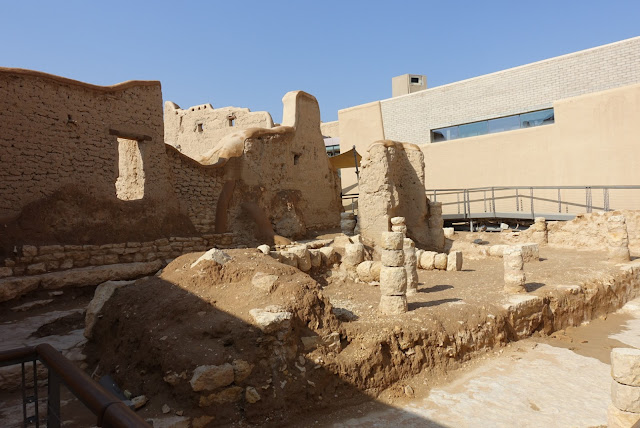 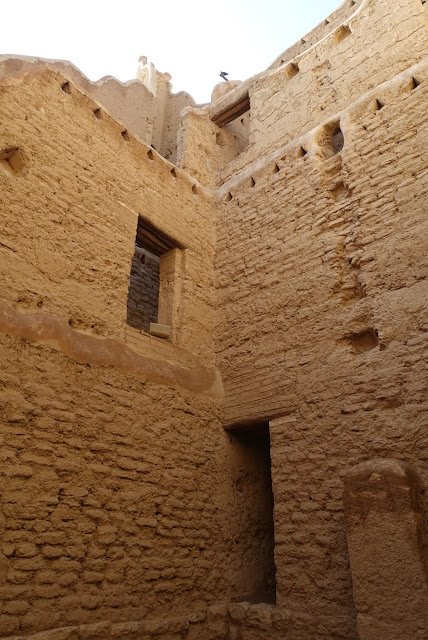 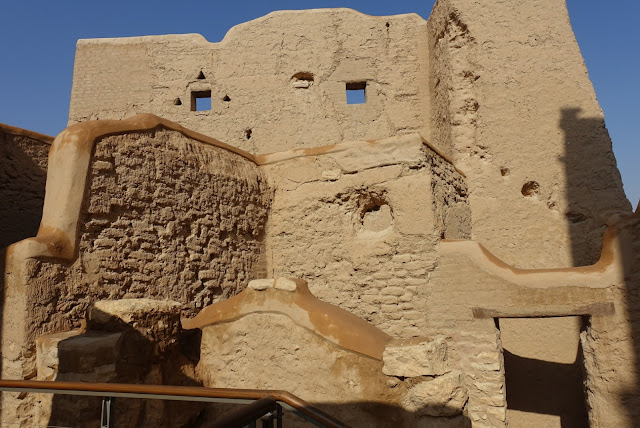 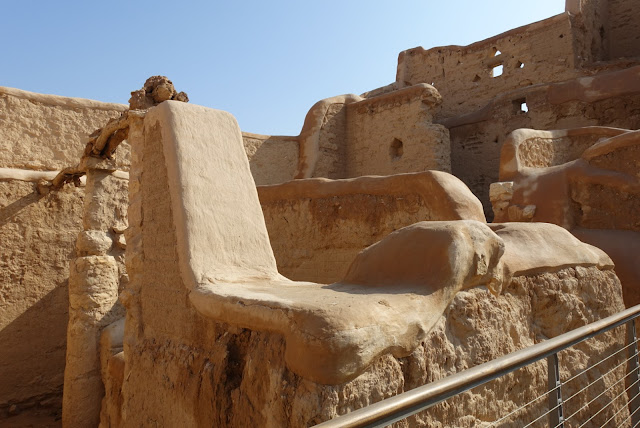 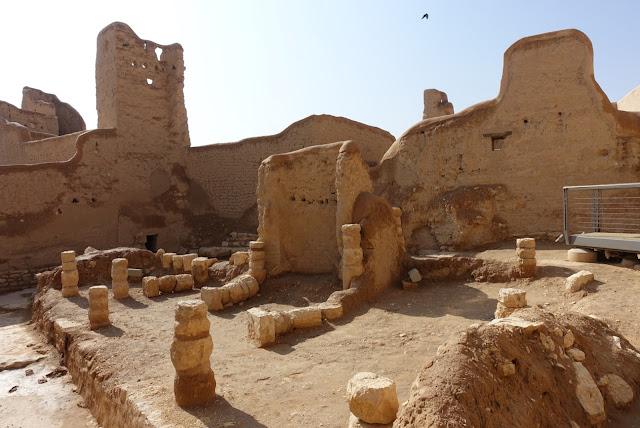 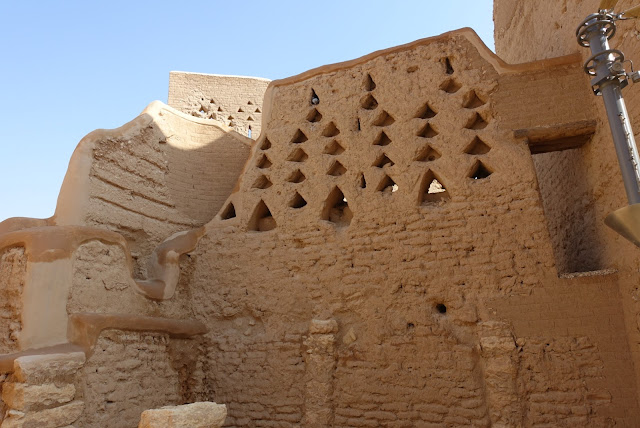 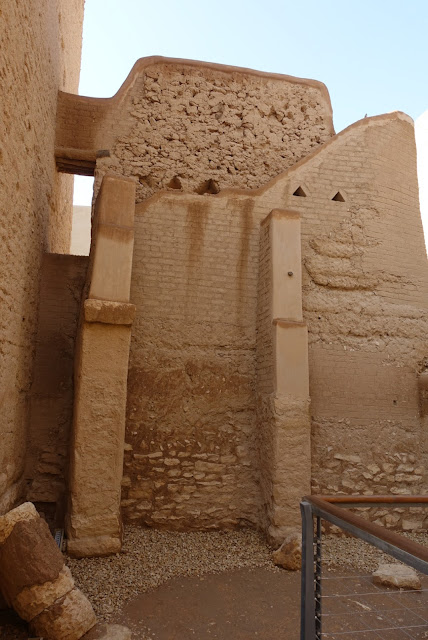 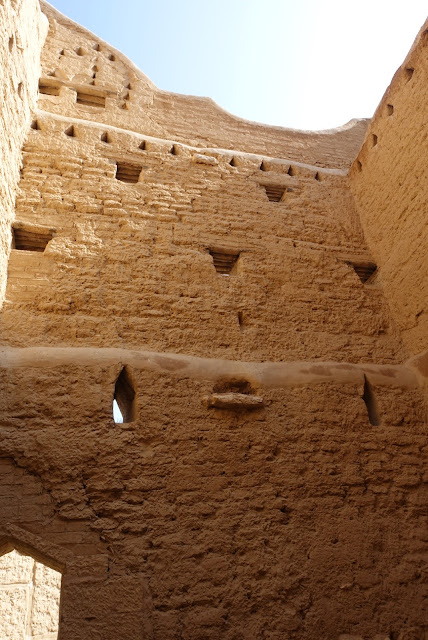 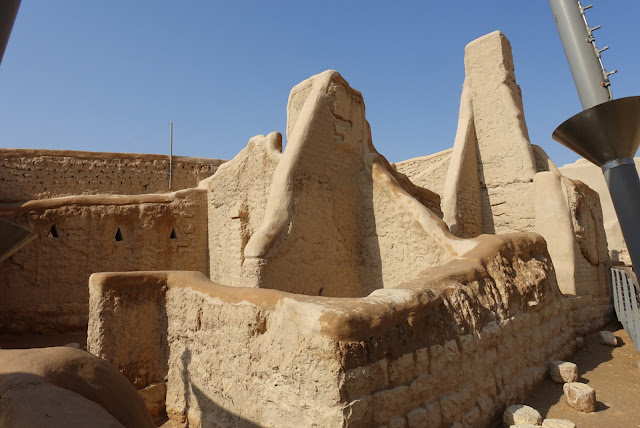 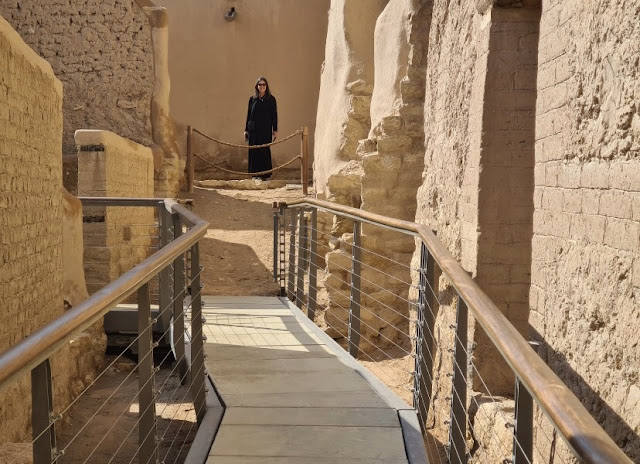 It just opened December 4th and costs $36 to enter except from 10 until noon it’s free. All booking has to be done online and when we looked, today was sold out. I went with Karen to the gate and she talked to the attendant who, when told we were foreigners, let us in without tickets.  I’m not sure how many people are allowed in but it was not crowded at all.  They are still working on it, I think the opening might have been premature but they’re preparing for a Formula 1 race in January so will want it open for that.  The workers need some time to learn their lines too.
There are different areas to visit such as the art gallery where a calligrapher wrote my name- 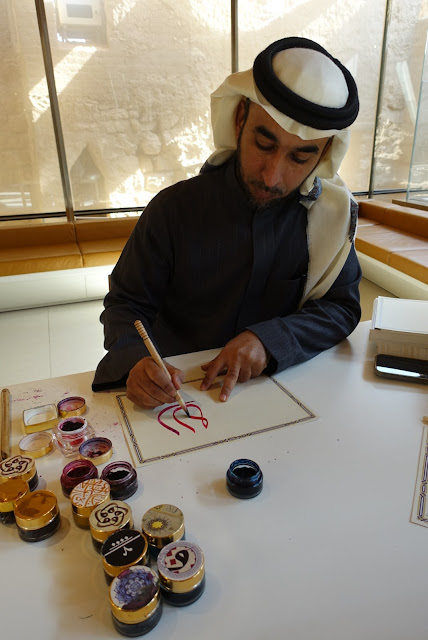 And there were 2 paintings- 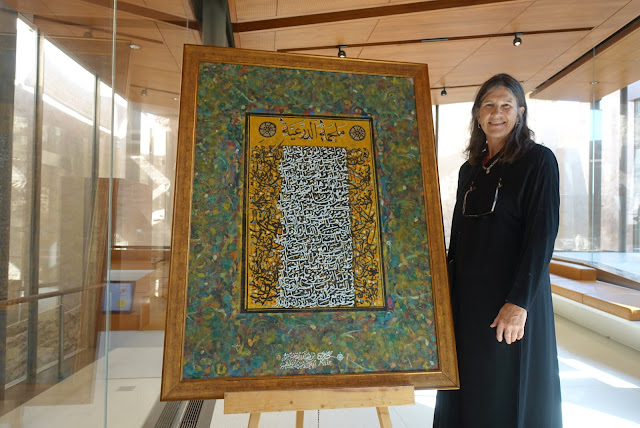 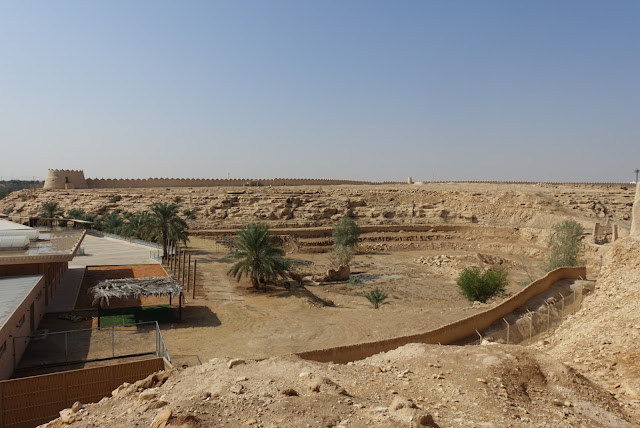 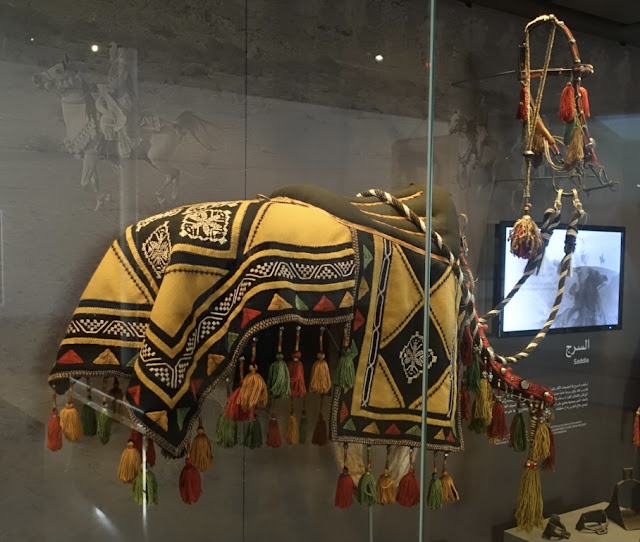 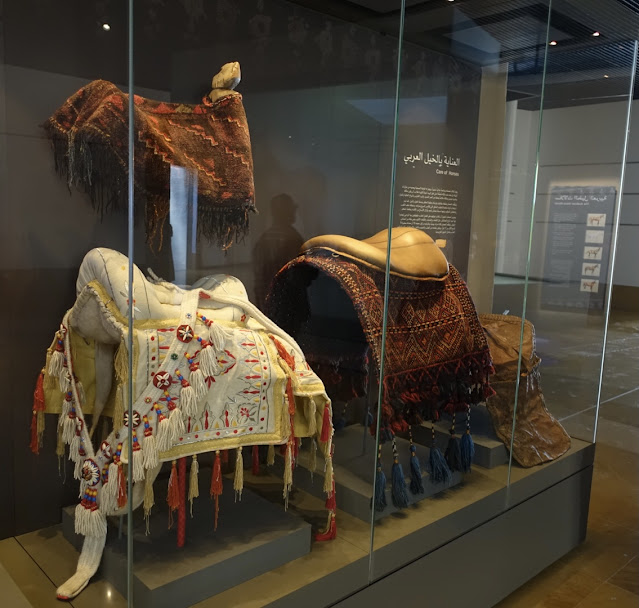 There are 5 types of Arabians: the Kehilan which is the oldest and most beautiful, named for the black rings around its eyes which resemble eyeliner. The Al Hamdani is named after its owners, the Al Saqlawi is named for its shiny coat, long and elegant neck and sparkling eyes.  The Abayan is so named because according to legend, once during a race, its rider’s abaya slipped off onto the horse’s tail and throughout the race the horse kept its tail up to keep the cloak from falling. The final type is the Habdan which is the strongest and fastest – 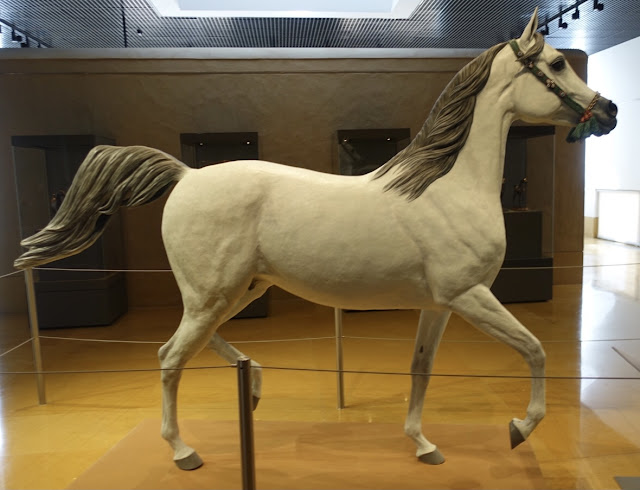 There were a lot of workers who were super friendly. I visited with one Saudi woman who told me that she can do everything that I can do except she must wear a hijab when she is in public around men. When she is only with women and in her own home she does not have to wear it. I asked her what would happen if she was with a good male friend but she said she didn’t have any so she didn’t really know how to answer.  I didn’t pursue that any further.

I enjoyed some tea and dates- 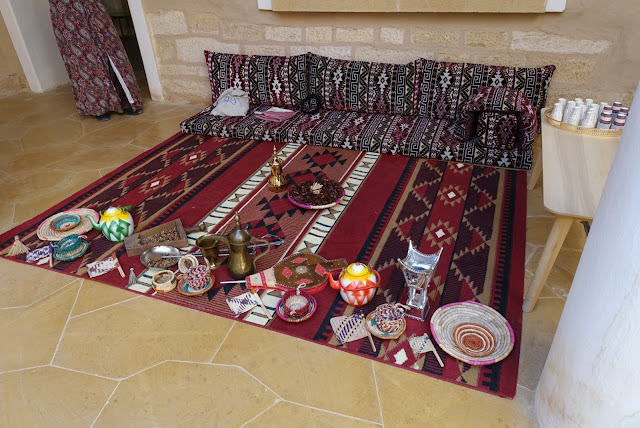 There’s a bronze plan of the area- 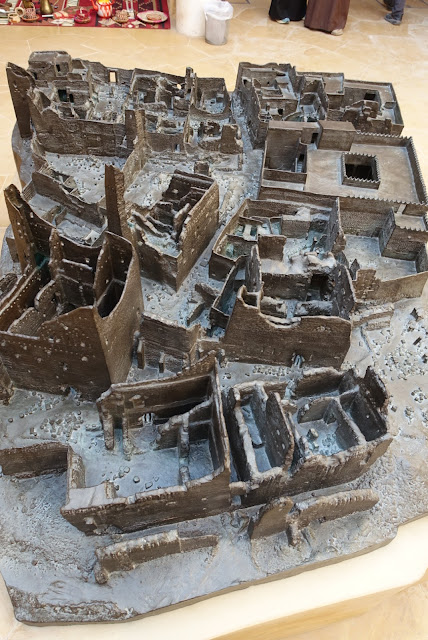 More rooms away from the palace- 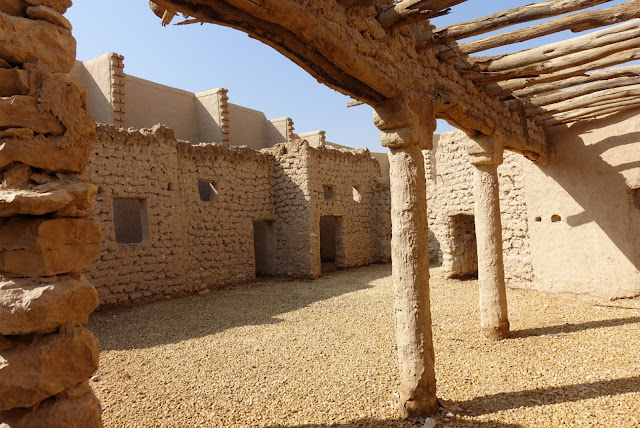 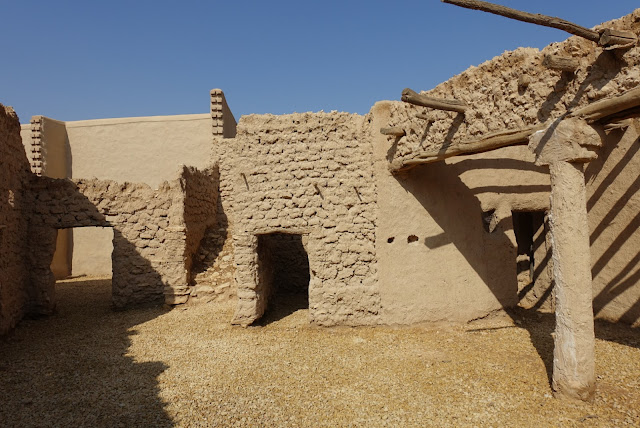 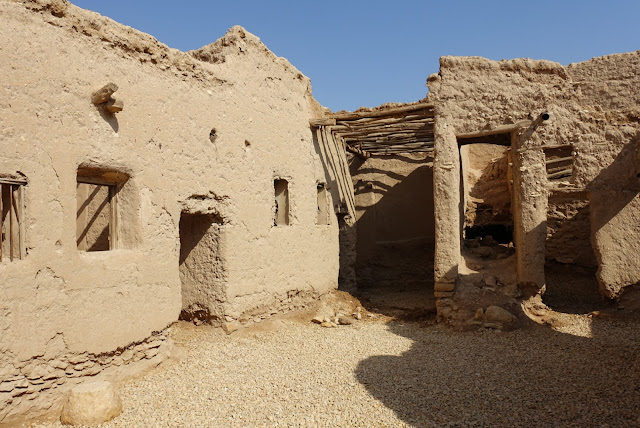 There’s a bit of building going on - so many cranes- 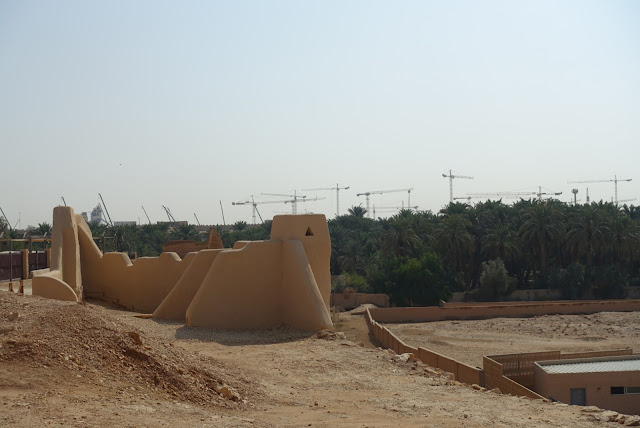 After a few hours here we carried on to our hotel. I am staying with Karen in a suite and I get the bedroom! I am very lucky – 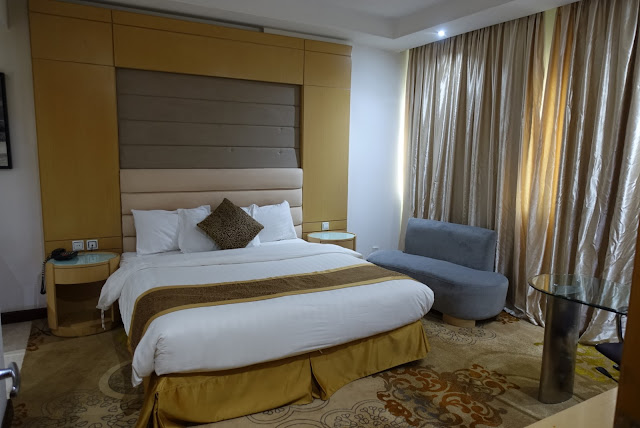 I went looking for something to eat and had the best tikka masala I have ever had. I didn’t like the naan bread so much because it was too thick- 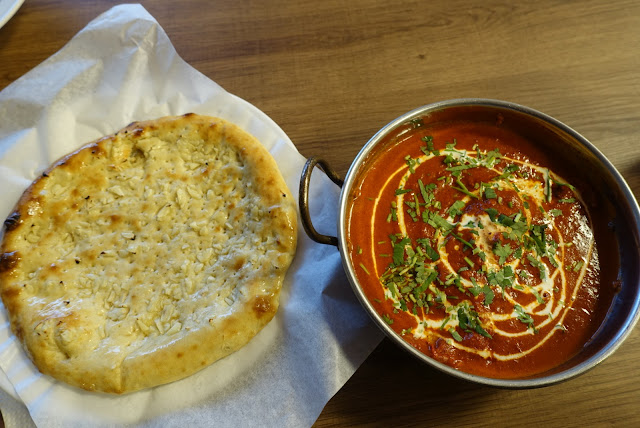 Tomorrow I plan to go exploring… if I can get out of this comfortable bed! 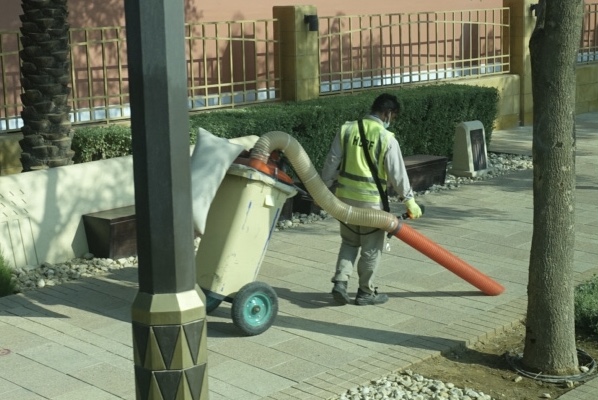