Happy Birthday to me, blah, blah, blah!  I’ve been looking forward to today, not because I am now 58 - that doesn’t bother me, but I have splurged and am moving into a fancy place called the Palmas Resort of Mazatlan.  However, I knew the forecast said rain for today - I could handle that because it says sunny for tomorrow, so one day sunburning on the chaise longue will suffice, however....

It started pouring about 2 this morning- 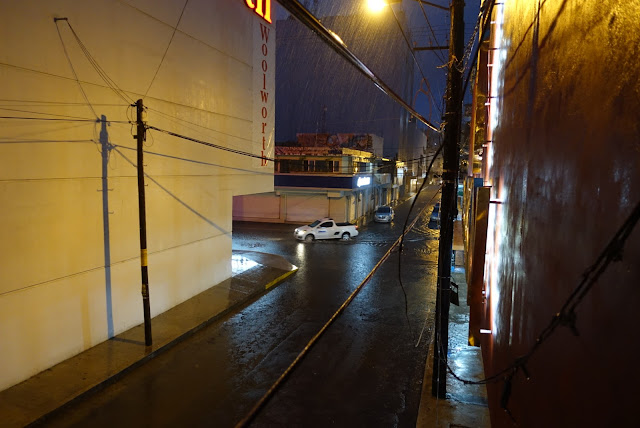 The drainage system seems non existent, so streets are flooded- 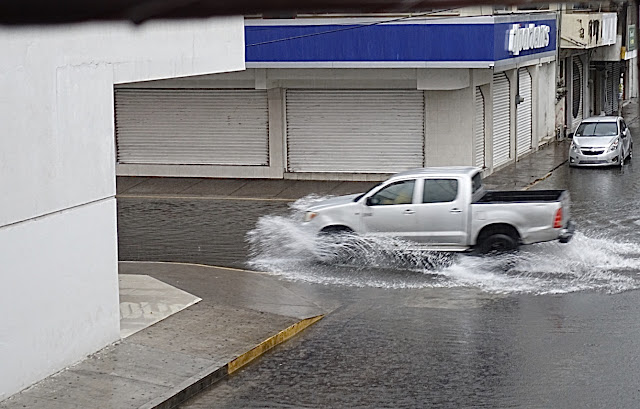 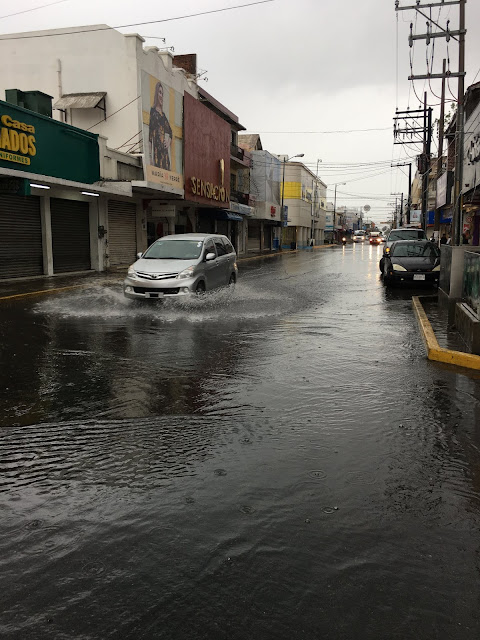 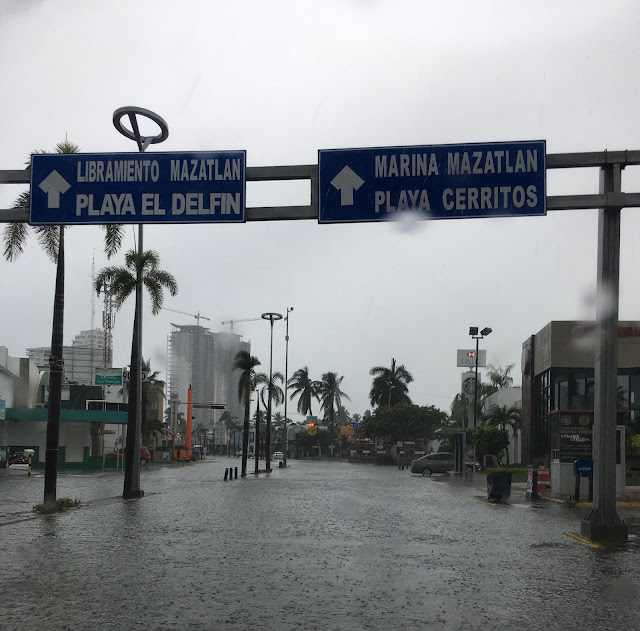 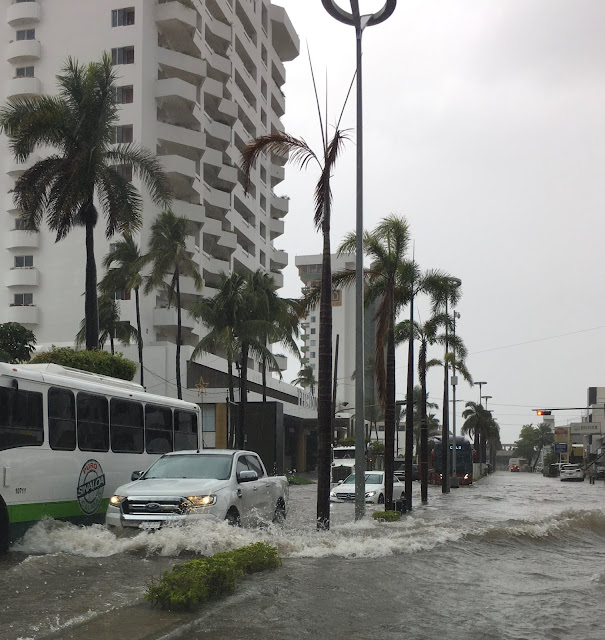 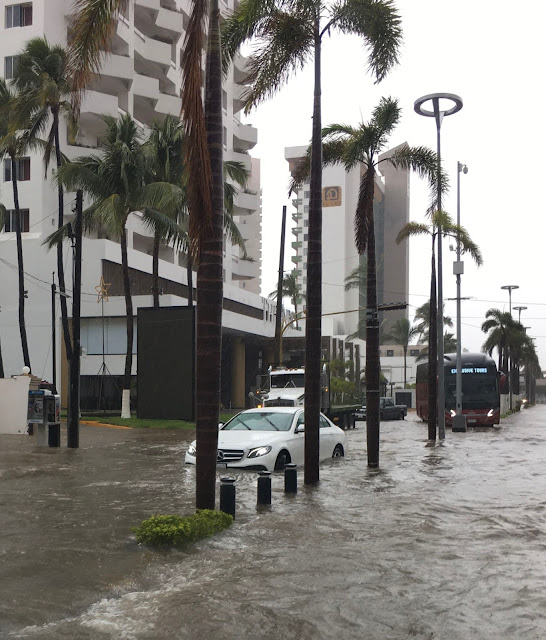 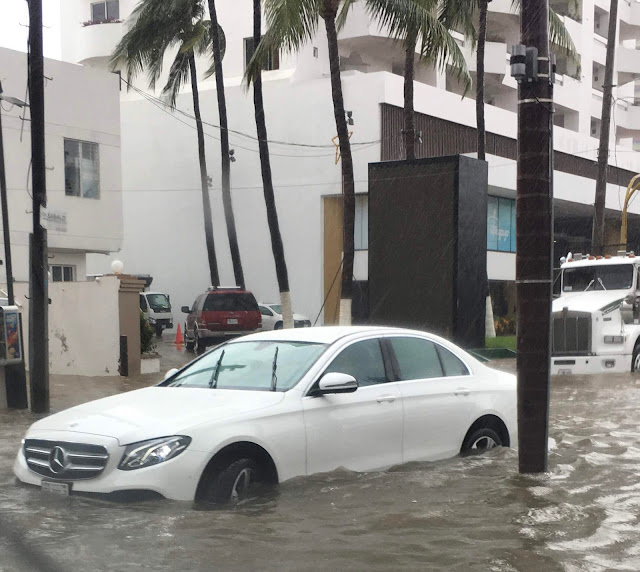 and the water runs onto the sidewalks.  It also means there are no buses so no one can get to work so few shops are open.  I waited about 20 minutes for a bus to come and not one passed by.  Usually in that time, there would be at least 20 if not more.  Finally I asked and was told that buses don’t run in the rain.  WTF?  Only in Mexico I guess.  So, I went back to my apartment, thank goodness I didn’t lock it up, to wait for the rain to quit and drain away.  I tried Uber too, but no cars were available.

In a few minutes, Alan, my landlord, and Ian from Cambridge, Ontario showed up.  Ian is renting another apartment from Alan for 5 months.  He drove down with a BMW motorcycle in the back of his truck but customs would not give him permission to ride it so it will sit for the winter and he’ll haul it home and sell it.  He had come with Alan to see my place and just so happened to have a truck.  When I told him my lack of transport, he volunteered to drive me.  Thank goodness because I don’t think the buses will run all day!

Higher vehicles were having fun- 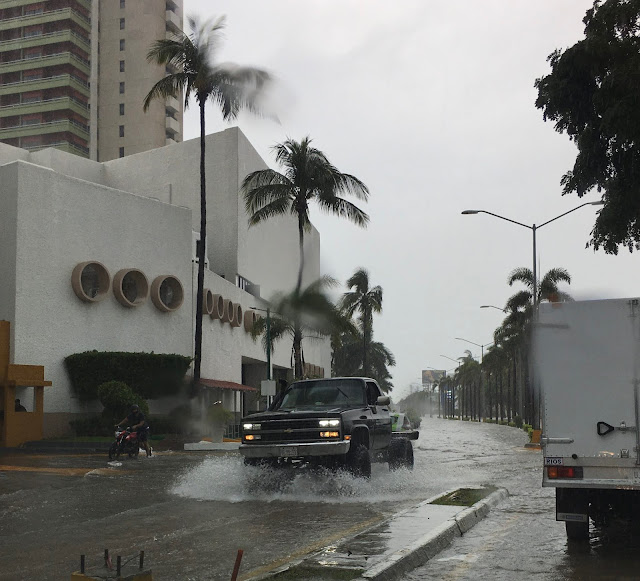 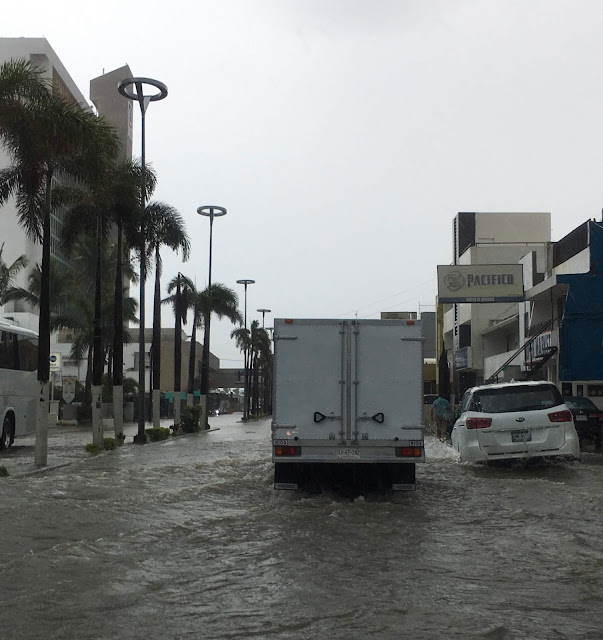 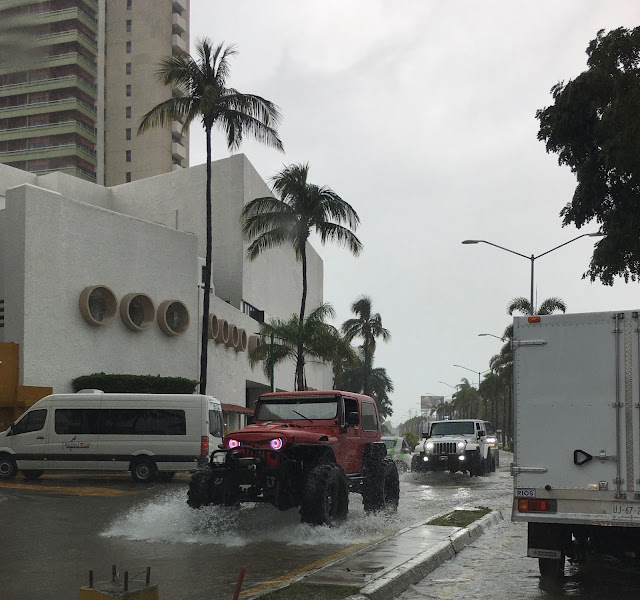 Alan had a picture from FB that showed a car completely underwater but you could see its headlights were on.  You can’t help stupid.  When we were about two blocks from my hotel, the police had the road barricaded and we could drive no further.  I walked the 500 meters or so in filthy swirling water higher than my knees- 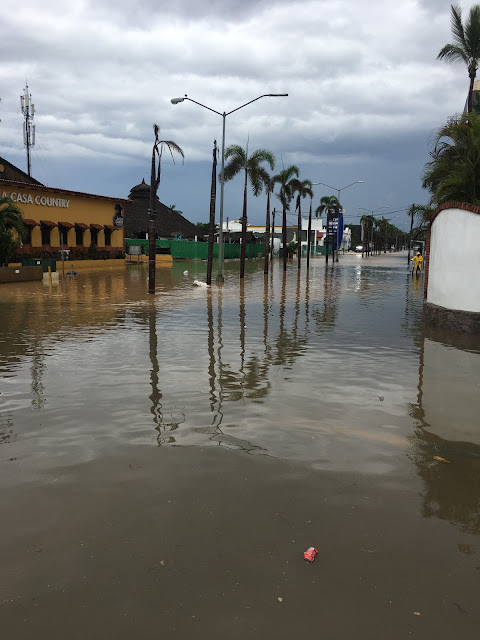 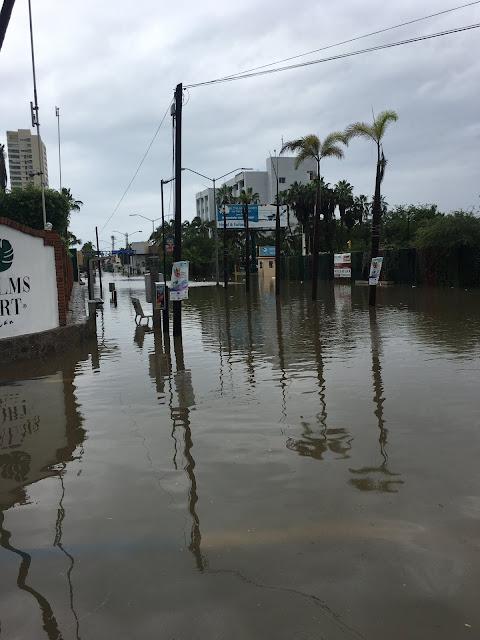 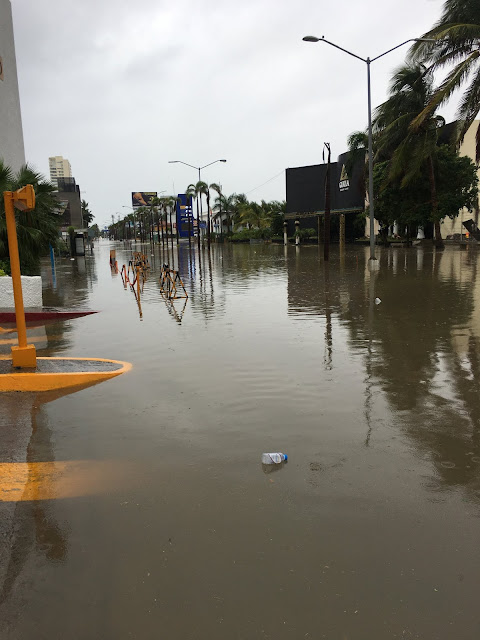 Sometimes garbage would go past my ankles and I would freak, thinking it was a snake or God only knows what other nastiness.  I hung on to walls or buildings or fences as I crept along because I couldn’t see the uneven ground and the last thing I wanted to do was fall with my phone, camera and IPad.  Eventually I made it to the hotel where the driveway was a disaster of litter and tree branches.  Many people were hanging around with their luggage but there was no way to get anywhere.  Many flights have been cancelled.

However, the beach looks great- 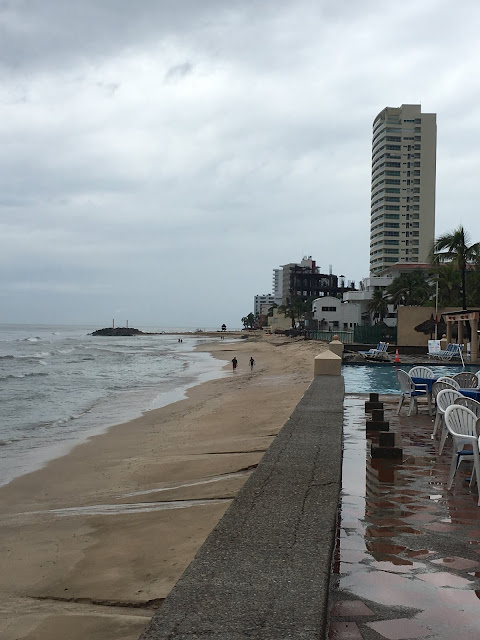 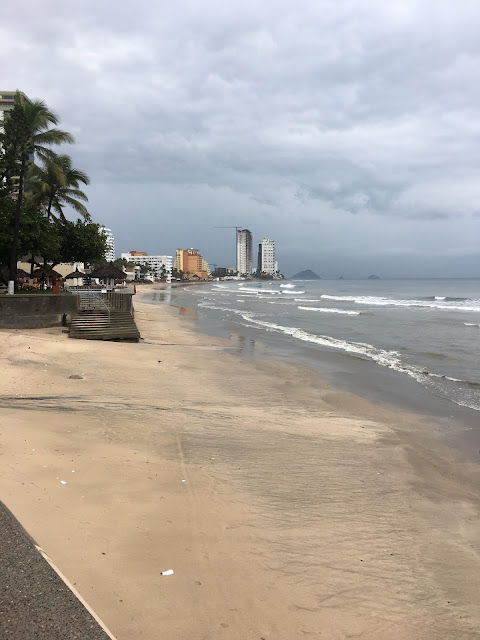 And my room is nice- 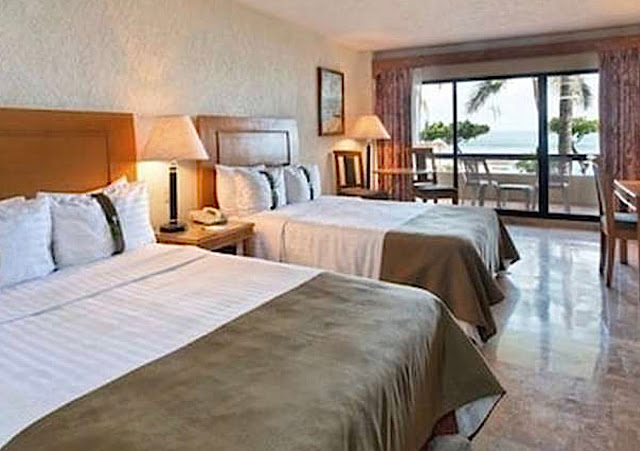 So is the view from my deck- 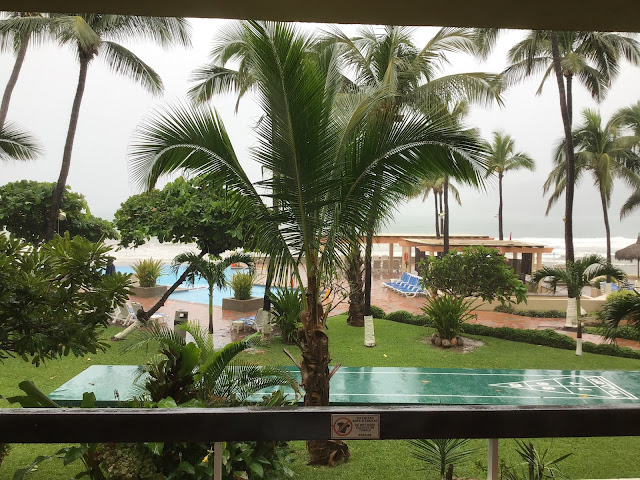 And I hope this is what I’ll see tomorrow- 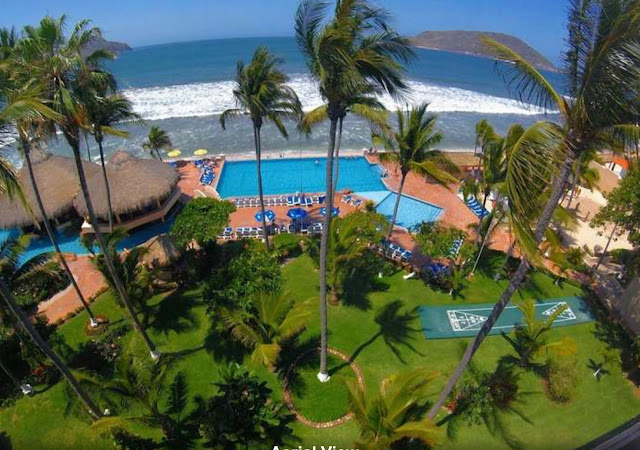 Not sure what I’ll do for food.  The kitchen has limited staff and are serving sandwiches.  Oh well, it isn’t going to spoil my time!  Looking forward to sunshine tomorrow!
at November 28, 2019