I had three goals today:  visit the Museo Arqueologico, change money and go to my Spanish class.  I got a better rate today - $18.40 pesos for $1 US.  Two weeks ago I only got $18.10.  I also received a regalo, a gift, of $18 for dealing at Elektra.  It’s an appliance store with a busy bank in the back.  They wear uniforms and there are windows like in a normal bank so it’s not shady, although I did get two kinds of 500 peso notes.  Until today, I’ve only ever seen reddish brown 500s and today I got blue ones.  I asked another worker on my way out of the store if there were two colours and she said there were.  I didn’t want to be ripped off. 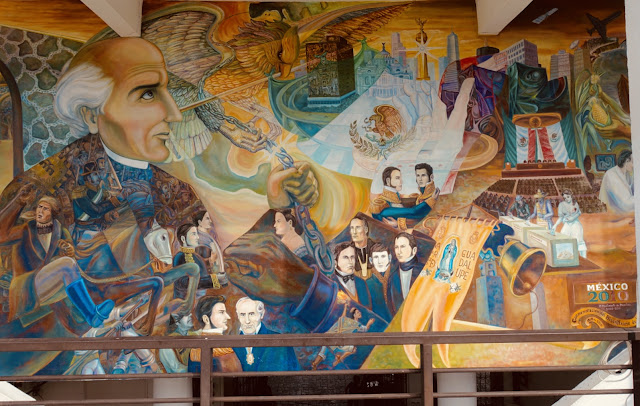 It was painted by Aaron Zamudio in 2010 to commemorate Mazatlan’s Bicentennial.

The Museo Arqueologico has only four rooms and I didn’t see the mammoth I’m sure the man outside on Monday was talking about, but the same man was inside working today.  This area of Mexico- 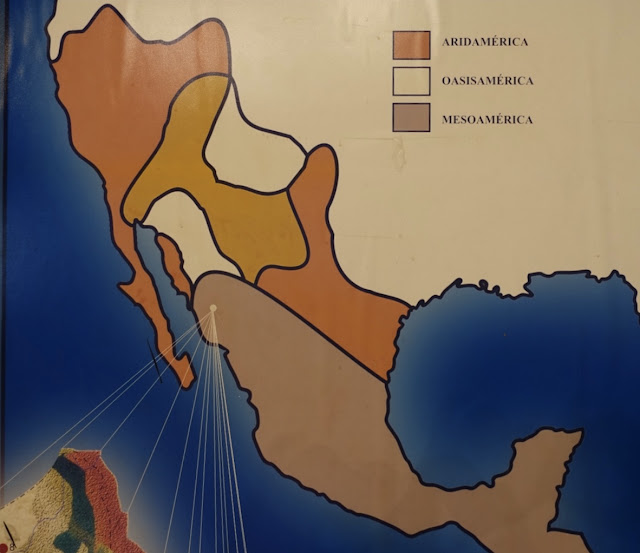 was first inhabited, or at least the artefacts that have been found, date from 250 BC - 750 BC.  There are a lot of carved stones- 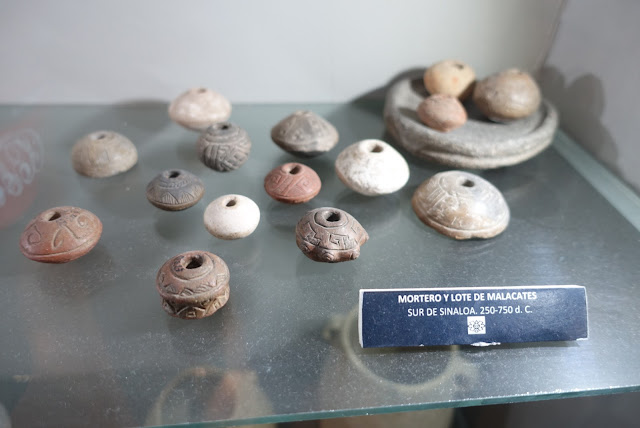 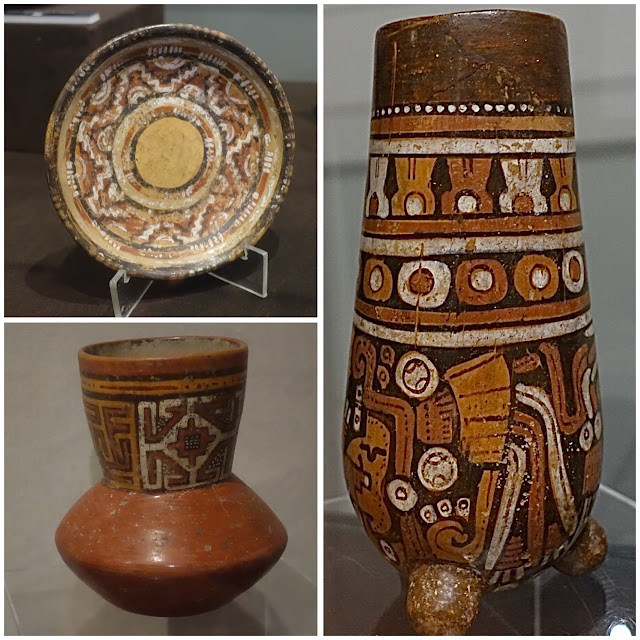 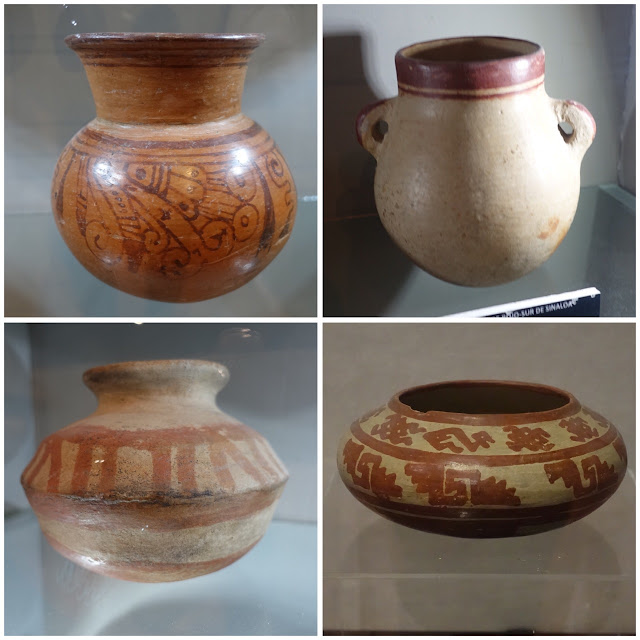 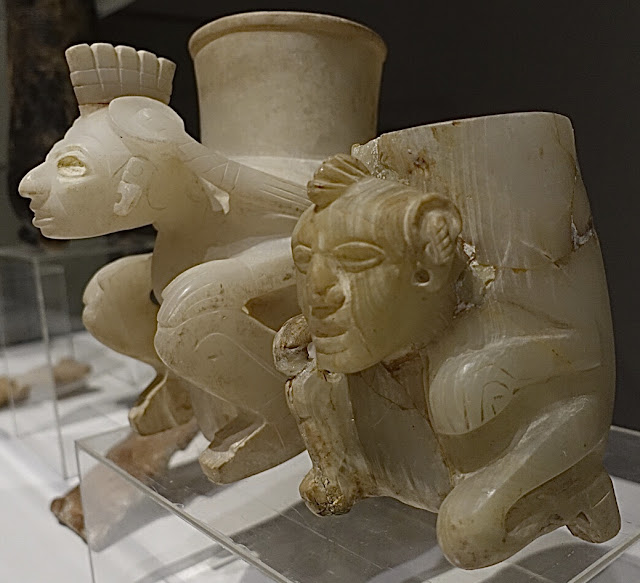 One of three carved penises without an explanation.  I guess there isn’t really much to say- 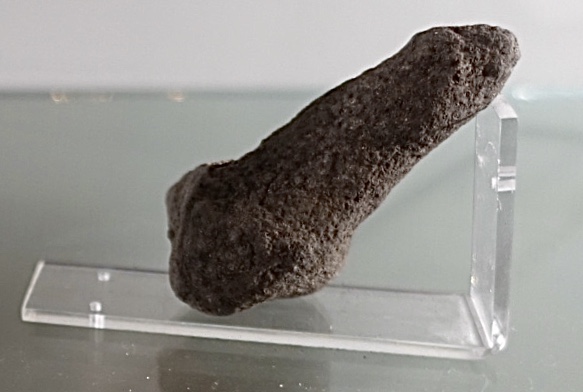 After centuries of burying their dead in a coffin of straw matting or sometimes without even a coffin, they started to clean the body of all soft tissues, then dismember it and place it carefully inside a large funeral urn  Larger bones were put in first and the skull was put on the top.  The ceramic funeral urn was then buried underground and could contain more than one family member if required.  The ritual was designed to portray the return of the deceased to the uterus of Mother Earth, the Goddess of all agricultural societies- 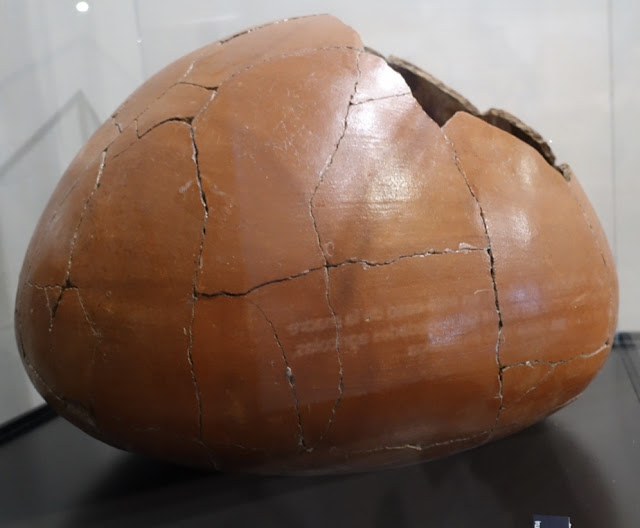 There were also obsidian arrow heads- 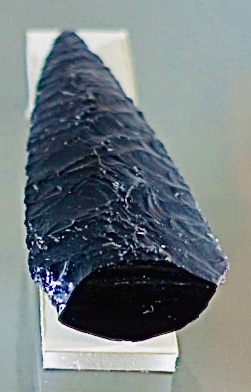 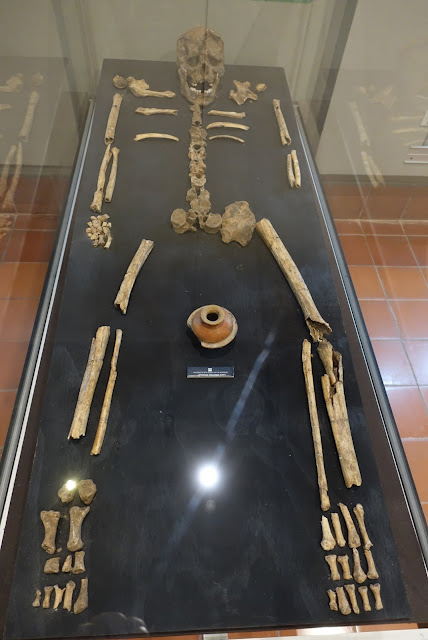 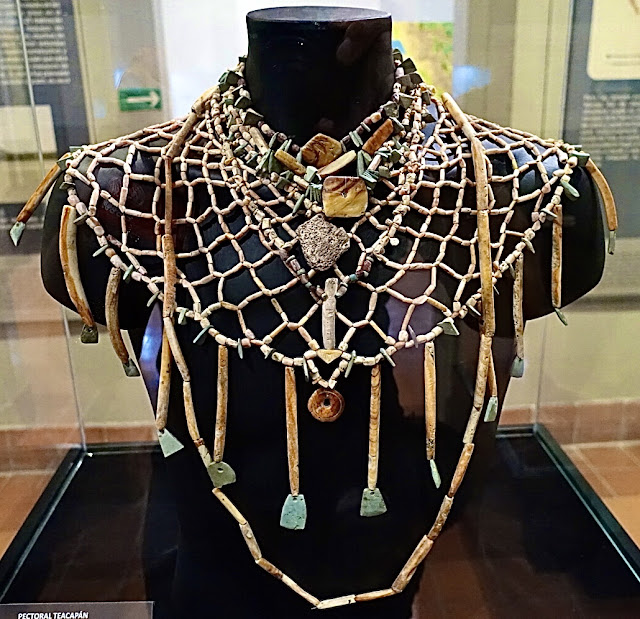 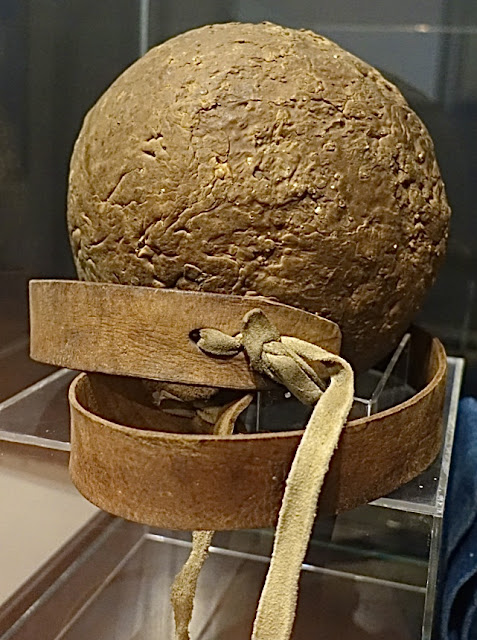 A hunchback was seen as lucky- 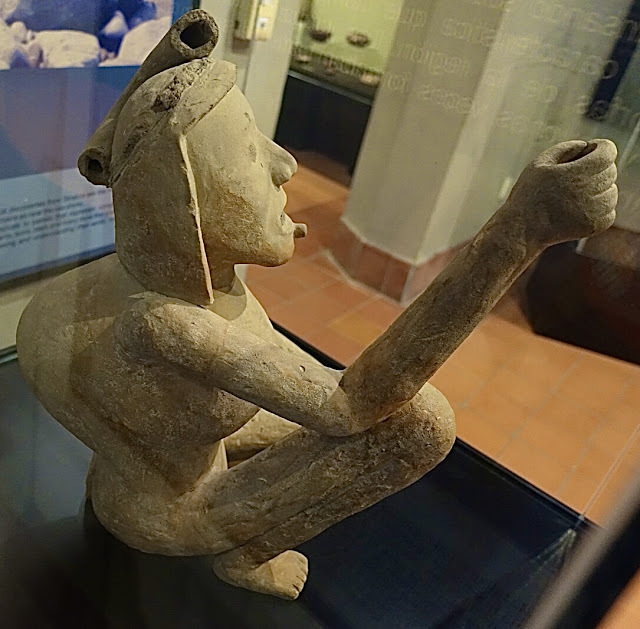 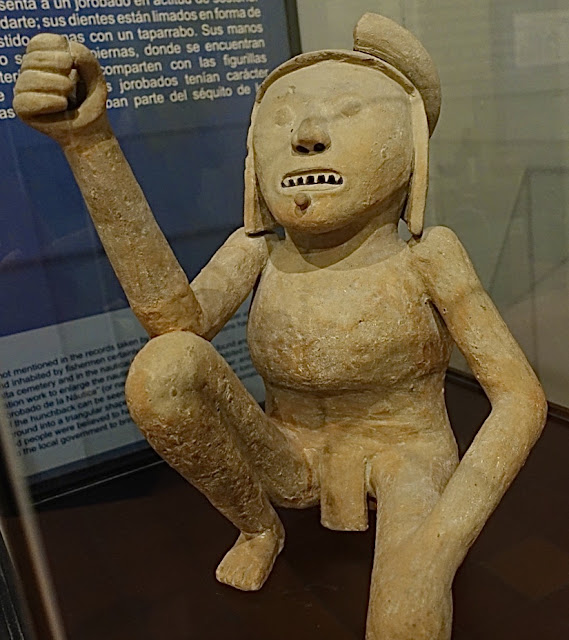 so they were revered and often involved in local governments.  The teeth have been filed into points- 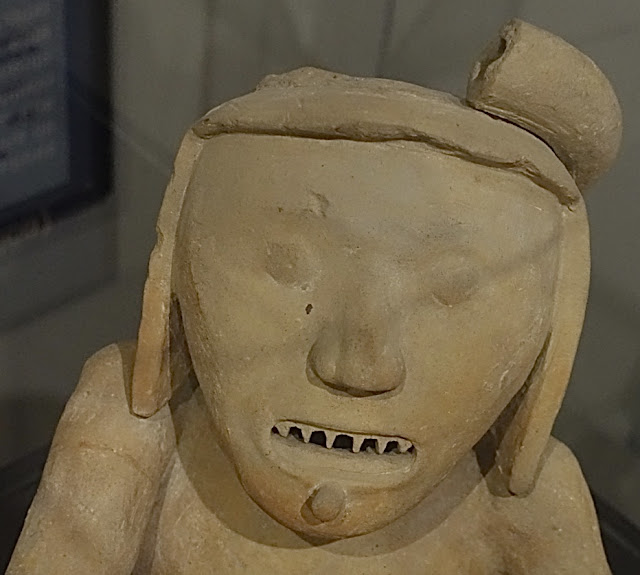 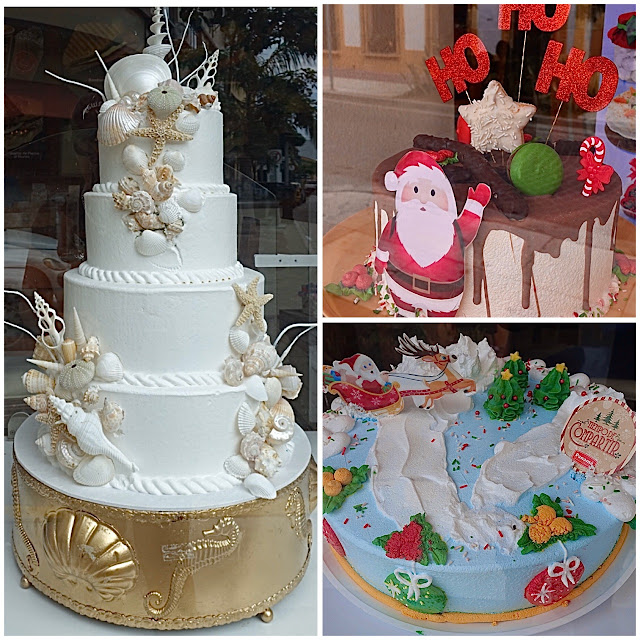 I hung out in Plazuela Machado, enjoying people watching and the greenery. I returned to the Mercado for chilies relleno, but they were the same as what I had in Bucerias, certainly not as good as I had in Guatemala- 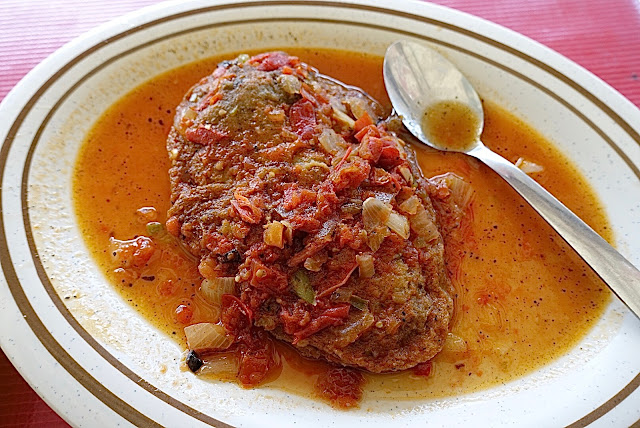 I got a text about 1 pm that there would be no Spanish class again today.  Oh well, Luna did say that it was mainly a class for beginners working on vocabulary. I think I might have been to advanced for the group anyway!  That seems funny saying that!  Me advanced in Spanish!

I came home and enjoyed the AC while having a beer, reading and working on my Spanish workbook.  I’m looking forward to moving to my fancy hotel tomorrow!  Hope it’s worth it!