I love my place!  It’s comfortable, cool with the AC, there is ample hot water and the little courtyard works just right in the mornings to read the Star Phoenix.  Yes I do that.  So far anyway.  I like to keep up with the news from a few days ago.  One time this fall, I watched the Saskatoon news on TV.  The next morning, while reading the SP, I knew everything.  Because the paper is printed in the night, it’s yesterday’s news.  Oh well.  I still do it.

I meandered down to the gym for a 10:00 CrossFit class- 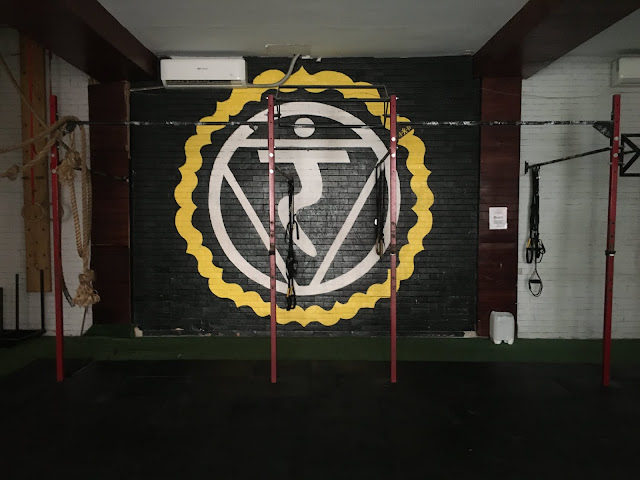 and got not only that, but also a free sauna.  OMG it was hot in there, in spite of multiple fans and a couple of air conditioners.  There were 5 of us in the class - Vivienne, whom I met yesterday from NYC, Dawn from I don’t know where - quite a few of the people I meet are from there, and Rob and another dish soap name from Wales.  No Mexicans.  One week cost $30US and a month costs $55.  They have all the equipment- a treadmill, multiple spin bikes, free weights, kettle bells, TRX, boxes and more- 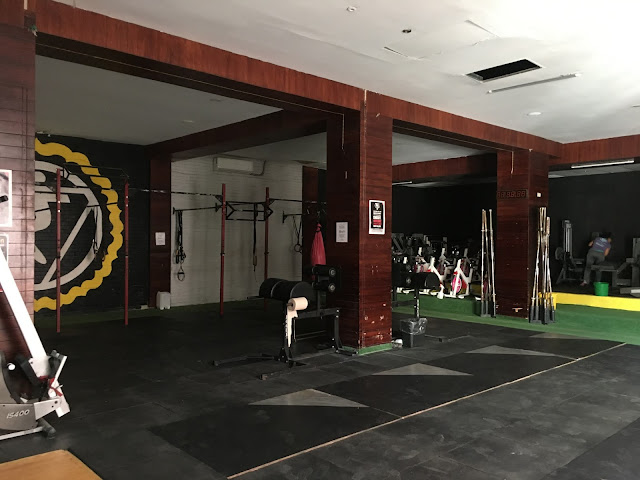 In no time - sure, the class was over.  I really miss Miranda and hope that everyone at home appreciates her bright, clean studio and her ability to create plans that are different and work all muscles.  This was okay - we started with 3 exercises 10 times each for 4 reps.  First we did a bicep curl using the TRX, then using the TRX only for balance we did squats then lunges..  Next we were to walk around the perimeter of the gym holding kettlebells - 4 laps, then using a box, do 20 pushups, then spend 2 minutes spinning or on the elliptical.  We had to do this 4 times and then we were done.  I stayed for Hatha yoga afterwards and it was fine too except there was a private class happening right behind me and the doors were open to the street so I could hear traffic.  It was a good way to stretch out after the gym.  I’ll go back tomorrow for the 10 o’clock CrossFit class and then to yoga at 8 pm.  After yoga I made a cleaning, polish and checkup appointment at a dentist, then had a juice, still a green one with more orange juice, a little honey for added sweetness and more ginger.  I liked it better than yesterday  Wandering home I stopped for a shredded pork taco.  It was excellent.  Once at home, I decided to go to Pinocho’s for a  beer and sat there for about an hour, staring at everyone  Others came in and made their way to an empty chair near others and started conversations..  Not me.  I sat by myself sipping my beer.  Eventually Jorge, one of the workers came over and remarked at how peaceful I looked..  That’s something he has to work on apparently.  Funny, I thought.  I feel like I stick out like a sore thumb.  Eventually a man arrived by himself so I went over and sat with him.  He’s Brett from Seattle and owns a home nearby for the past 12 years.  We had a good visit about past travels and soon it was time for the dentist so I left.
Jesus Gonzalez could have been working in North Battleford.  He was very professional and the office was ultra modern and clean.  He even wore gloves, not like that yip yo in Antigua who was sitting at his desk on his computer and when I came into the office and sat in his chair, he had his bare hands in my mouth looking for who knows what.  I had a cleaning using ultrasound, scaling, polishing and a checkup for $41.  I thought that was all right, considering it cost $300 last time I went in Saskatoon.
Once back home, I discovered the power was out and so messaged Sean.  Apparently he paid his last bill at an OXXO - like a 7-11, the day it was due and so he has a late charge and I guess they decided he needed his power cut off.  Too bad because I was looking forward to a nice cool place.  They are supposed to be coming tonight or flipping a switch somewhere to turn it back on but meanwhile I have moved a couple blocks over to another one of his rentals.  It’s nice and big but there is no AC so I’m sweating.  I hope I don’t have to sleep here, plus it’s very dark and someone is blasting traditional music outside- 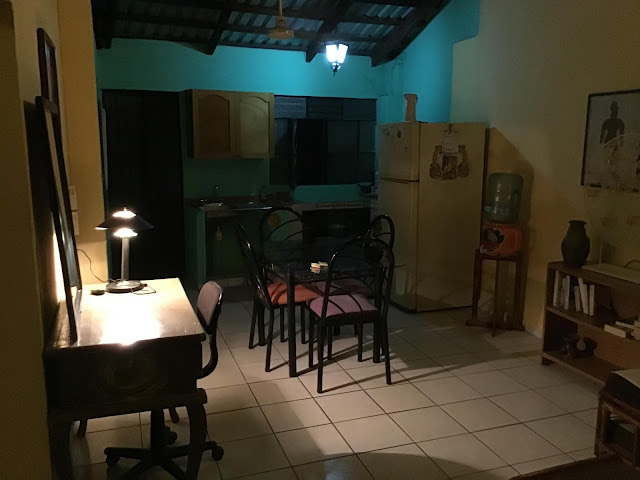 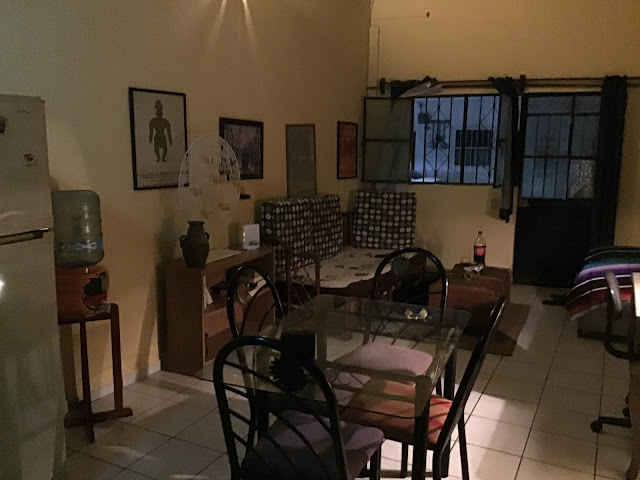 I’ve been working in a Spanish workbook I brought with me so will spend the night doing that.  Tomorrow, I’m off to the gym, then will maybe head down to the beach for awhile and work on my tan!  Life is tough!
at November 05, 2019