I woke up at 8 which is the latest I’ve slept so far and that was with open windows to the street that after last night, with the cars roaring by, the music blaring and the fire crackers exploding, I didn’t think I’d catch a wink, however, about 10, life outside calmed down and in spite of being in a different place with no AC and only a ceiling fan, I had a good night.  I had no idea when I left apartment #2 if the power would be on at apartment #1 and sure enough, it wasn't but I have a gas stove so was able to make coffee and breakfast but I couldn’t read the paper because without power, there is no internet.
I headed to the gym for 10 and there were only two of us.  After some warmup exercises, we did some spinning, then threw a 10 pound medicine ball up against the wall and caught it while going into a squat for 15 reps.  From there we moved to a box where we stepped up 20 times holding the same 10 pound medicine ball.  We did this four times.  I know I’m slow but the girl beside me  could not count.  She always finished before me even though we moved at the same speed.  It was so hot in the gym, sweat was dripping off me and I was often dizzy.  Next we did squats alternating with getting on this stupid machine, stomach down, legs trapped and we had to bend at the waist and lift our upper body upwards ten times for four reps.  I was dying - not from the exercises, just the heat.  The last few minutes we did ab work and my abs weren’t sore, it was my neck muscles.  I’m glad I’m only staying at this place a week because of the heat and the mediocre/ poor instruction.  Miranda has spoiled me.

After the gym, it was a relief to get outside in the 31 degrees -that’s how hot it was in there.  I had my usual green juice, but this time with grapefruit instead of orange.  Mary and Fernando- 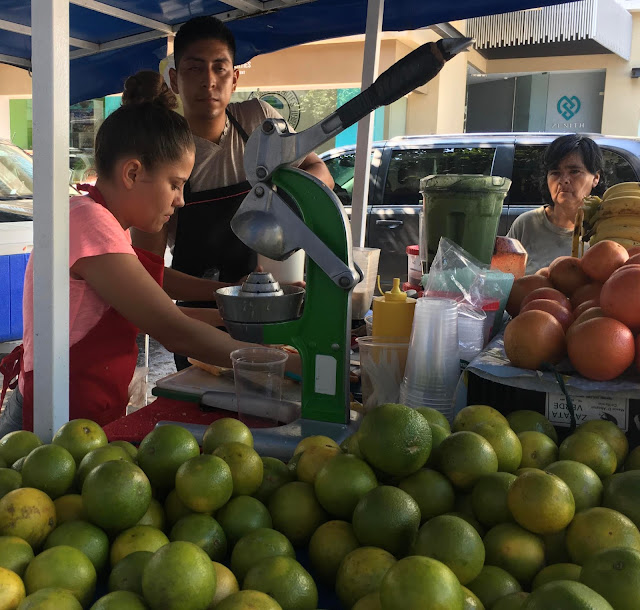 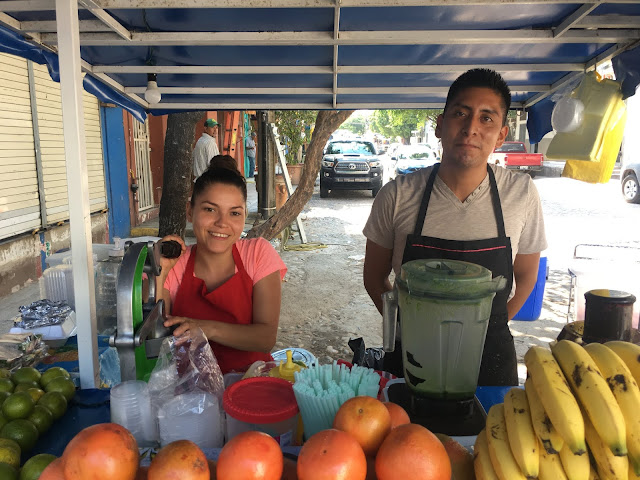 are a young married couple and have a 15 month old daughter.  Fernando wondered if it was okay to be speaking to her in both English and Spanish.  They start work at 3 am and quit around 9 pm.  According to some expats I’ve met, they have the best juice in town.  They're busy because they go through 80kg of oranges/day!

I wandered home and spent most of the day sitting in my ‘office’ which is on my bed in the cool AC. I went out for a carnita - pork taco at a place where food tours stop, worked on Spanish, did laundry -I have access to a washing machine and clothes line, walked to the fruit/vegetable market and on the way stopped in a butcher shop and had a piece of chicharron- 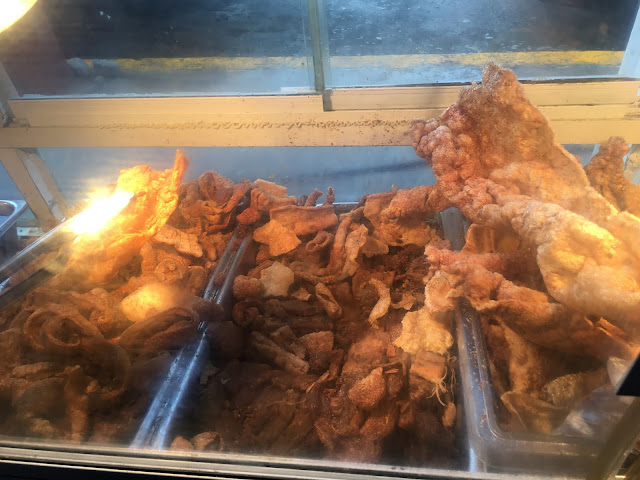 They offer three kinds.  The one on the left is the leanest, as if, and that’s the one I had.  It’s very light and crunchy. The middle one has more fat and the left one has a lot of fat.  Gross.  Lard chunks!  Unfortunately I was too late for the market, it’s open from 7-3 so I went home and relaxed.  I didn’t even go to Pinocho’s for a beer.  I thought that would be kind of counterproductive after working so hard at the gym.  I also have started researching what I’m going to do the next two months as I make my way around west Mexico.

I’ve been thinking about how I spend my days and I’m really not doing anything different than I would be at home except - 1.  I’m in a warm climate and can go outside without shoes and a coat.  2.  I can eat the most awesome fresh and flavourful food for under $2.  3.  I don’t have to feel guilty by refusing subbing jobs or work at Sask Hospital.  Only thing missing - Nico and Andi.  😢

I’m going to Hatha yoga tonight and Looking forward to tomorrow.
at November 06, 2019